We spoke to Gabriel Conti, Ducati Telemetry Engineer in the factory Ducati MotoGP Team during the last Malaysian MotoGP. Ducati looked to have made a strong comeback in the second part of the season.

We also saw how the team’s riders Andrea Dovizioso and Jorge Lorenzo ride at high paces throughout, yet they still had enough rubber to push all out in the closing five laps. Was that due to tyres? Electronics? 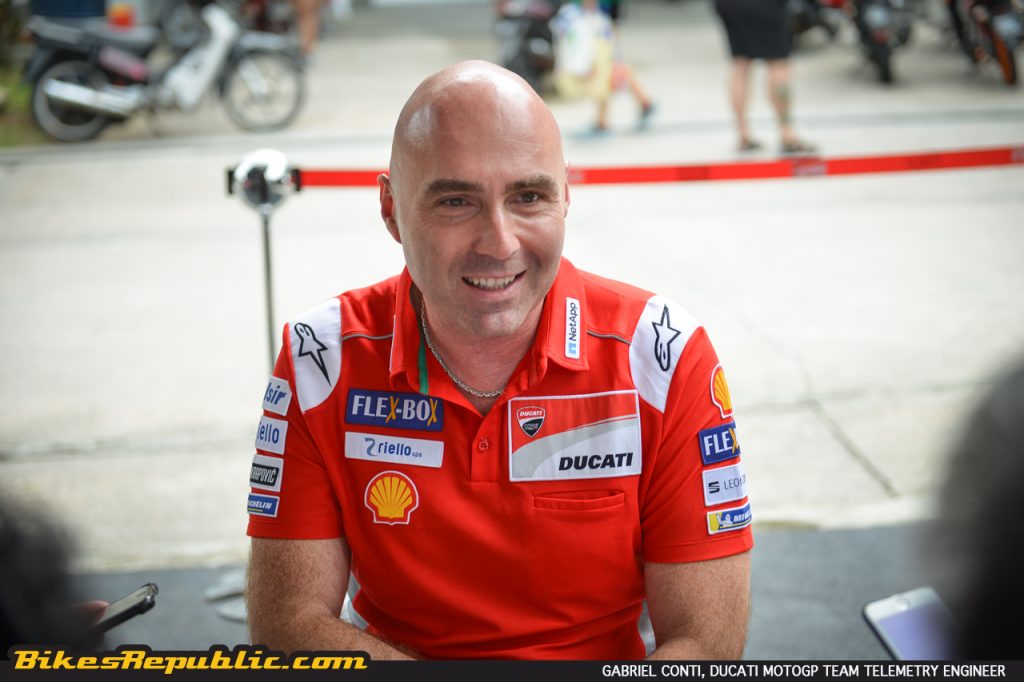 BikesRepublic.com (BR): What was the strategy that allowed Ducati riders to being able to push at the end of races? Was that due to electronic strategies?
Gabriel Conti (GC): Technically it evolved from the tyres because there is one tyre supplier for everybody. We have to analyze what the tyres do and with the data we can look to manage the tyres better.

With a lot of data we are able to manage the situation. Unlike Formula 1, we cannot change strategies during the race. We cannot speak with the riders (there’s no 2-way radio), we cannot send data (to the bikes), we cannot read data (from the bikes). As such, it’s very important to start the race with the data (we have). We decide with a strategy before the race, so the rider knows what to do.

The engineers check the numbers through the night. We have two automatic machines to make the calculations for tyres, electronics and bike setup.

But the last part is in the hands of the riders.

What we do is setup the electronics for the bike to be not so strong for one lap but is strong throughout the race. So in the last 5 laps there’s enough tyre to push.

We start by gaining and using data from pre-season tests and setup the bike up with the data at the start of the season. As we go on, we gain data everytime the bike goes out and we develop the setup. The data we have stored is important especially for different weather conditions.

For example, if there’s rain throughout the weekend and no practice can take place, we already have the data to use. 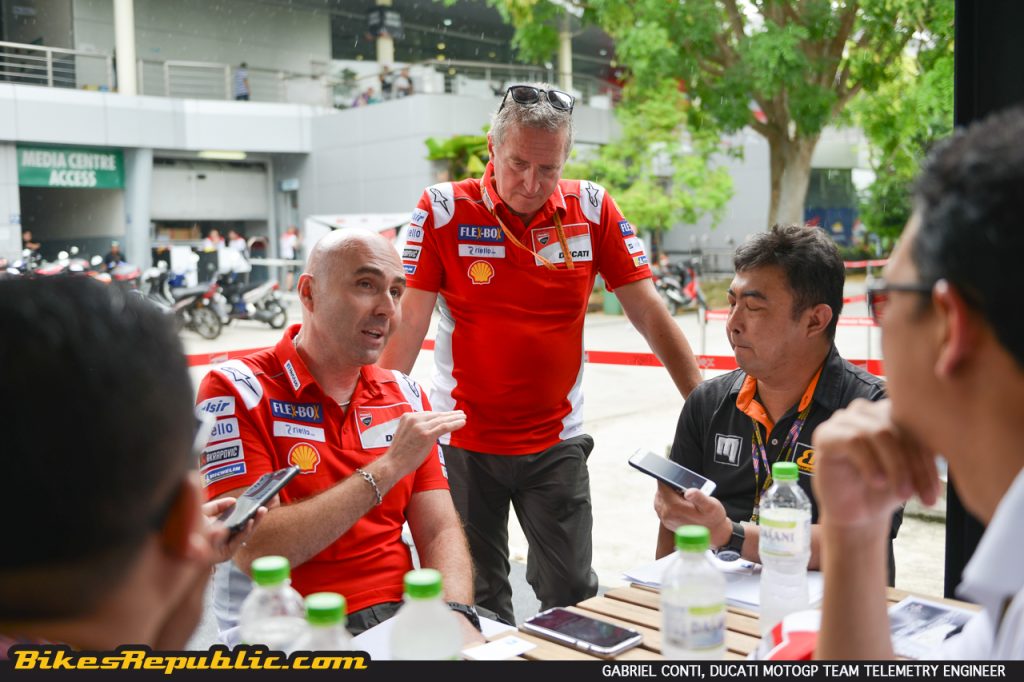 Other journalist: How does this benefit in racing?
Gabriel Conti: The data helps to setup the bikes in terms of tyres, suspension, electronics, traction control, engine performance. So, data and the rider combination are so important. We are absolutely data-dependant in this competition.

Other journalist: What’s role does Net.App play in the Ducati Team?
Gabriel Conti: Data (collection) has increased in the last year. For example, I remember 2005, we don’t have so much data. We didn’t send it to the factory, we didn’t use so much of it.

But we started increasing after 2006, to have deeper analysis.

Now we are strong for the data (sic). What we have improved are “thinking machines” that are quicker than the engineer to analyze a lot of data. Now we are improving because we have many riders, and more data to choose the right strategies.

BikesRepublic.com: The standardized Inertia Measurement Unit (IMU) will used for the 2019 season. How will it play out for Ducati?
Gabriel Conti: I explain the situation. In the past, four years ago the electronics was different. Then we started with the (standardized) ECU hardware, but you can develop the software yourself. Then the ECU and software were standardized (in 2016 – Editor).

But the Japanese manufacturers still want “free” IMU. The IMU is not a sensor itself, but it has (data from) 6 sensors fed into it. Which means it there is an algorithm to calibrate (the different axis of movement) so this is becomes suspicious. So, in the end all manufacturers agreed to move to a standard IMU.

You can still calibrate the standard IMU but by how much we don’t know.

Other journalist: Can you share with us instances where you tell the riders to go faster based on the data you have?

Gabriel Conti: Ah! Many, many times! The riders will look at the data to compare with other riders or the riders of the past. For example, when we had Valentino Rossi, he compared himself to Casey Stoner. We have a performance index that we give at the end of every session to say to the rider where is stronger and where he’s not.

It’s not to say he should push, push, push but for him to see that he might miss something. Andrea Dovizioso is a very clever guy, not all riders can use numbers. He uses them to improve himself. 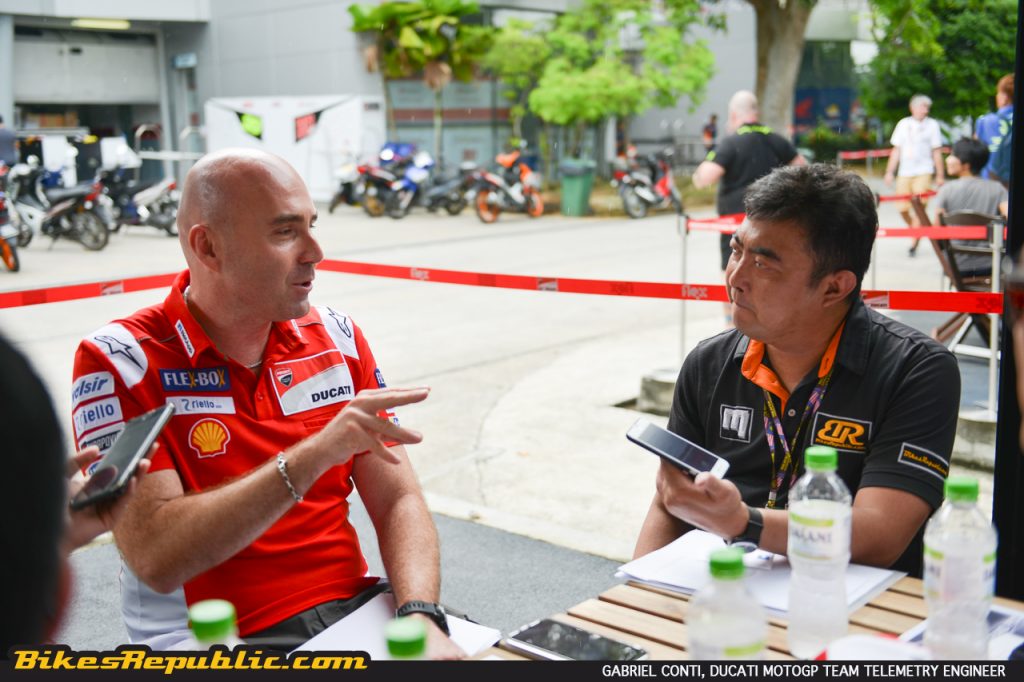 Other journalist: In Qatar 2018, Dovi won by 0.02 second.
Gabriel Conti: It was five years he lose by 0.02 second. In four years the gap to winner is less than one second. So you see 0.02 second is hard to find for the rider. Gigi (Dall’Igna) would say to us, “Pay attention to the thousandths” because the sum of a lot of thousandths can make you win or lose a race.

Other journalist: How much data are we talking about here?
Gabriel Conti: We generate like 100 Gigabyte of data per race these days.

Racing in MotoGP isn’t about going out there and twisting the throttle to the stop. There are so much more fascinating stuff that goes on behind the scenes that many of us could never ever have imagined!

The numbers that makeup lap times are made up of data. Where we see numbers, the engineers see information that can help the rider and team win.

So, the next time see the Ducati team win a race, think about how much data and information went into creating that victory.

Join us for Part 2 tomorrow as we unravel the secret of how NetApp plays a necessary role in Ducati’s victories.