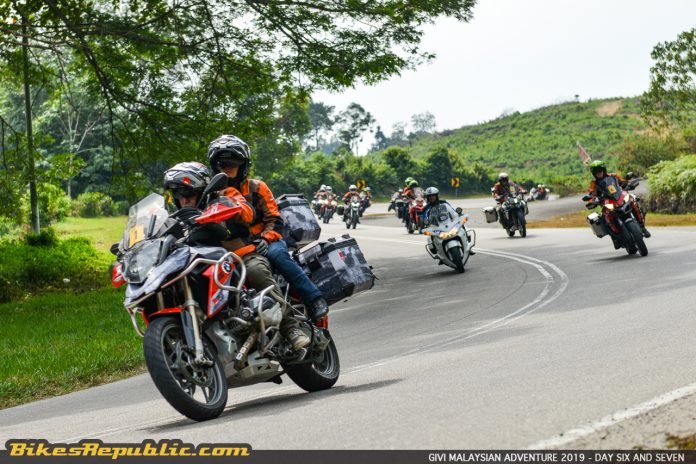 The GIVI Malaysian Adventure 2019 is about to hit its climax on Day Seven (26th July 2019). It was time for the GIVI Explorers to visit GIVI Rimba Raid at Janda Baik 2019. 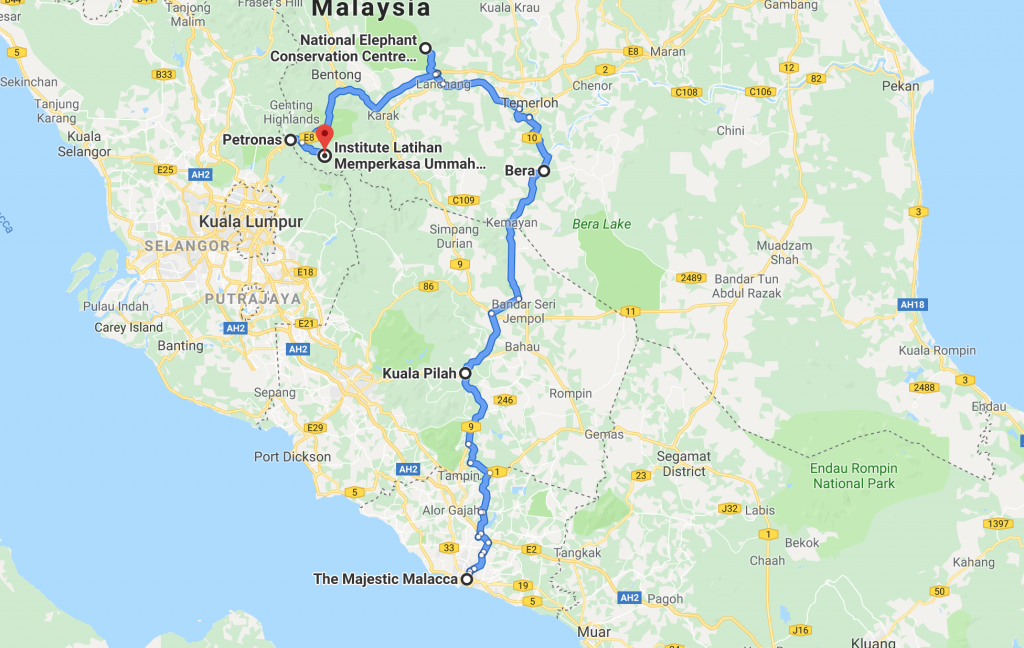 This was the second year of GIVI’s involvement in Rimba Raid and it promises to be the biggest one yet. The organizer of Rimba Raid, Dato’ Capt. Nik Huzlan had to limit the entries at 150 participants, but that’s already nearly 50% more than the 105 at GIVI Rimba Raid at Mat Daling 2018. 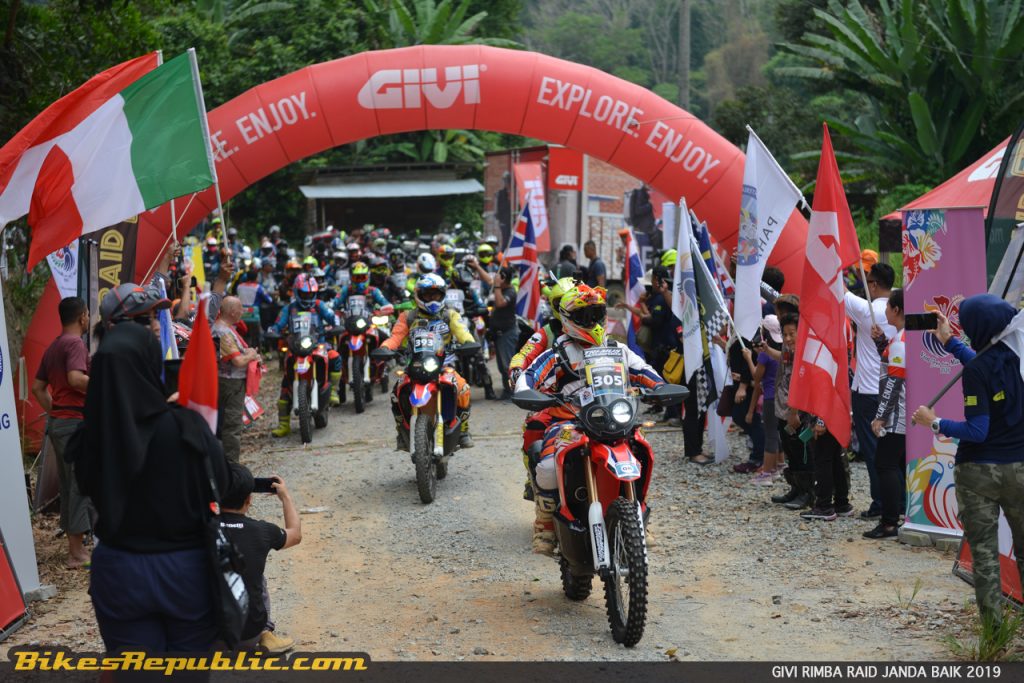 GIVI’s involvement also opens up the branding to off-road motorcycles besides the usual adventure bikes.

So today, on Day Seven of the GIVI Malaysian Adventure 2019, we needed to travel from Melaka to the Rimba Valley Motorcamp site.

Rather than hoofing it down the featureless highways the Explorers took a circuitous route that crossed three states. 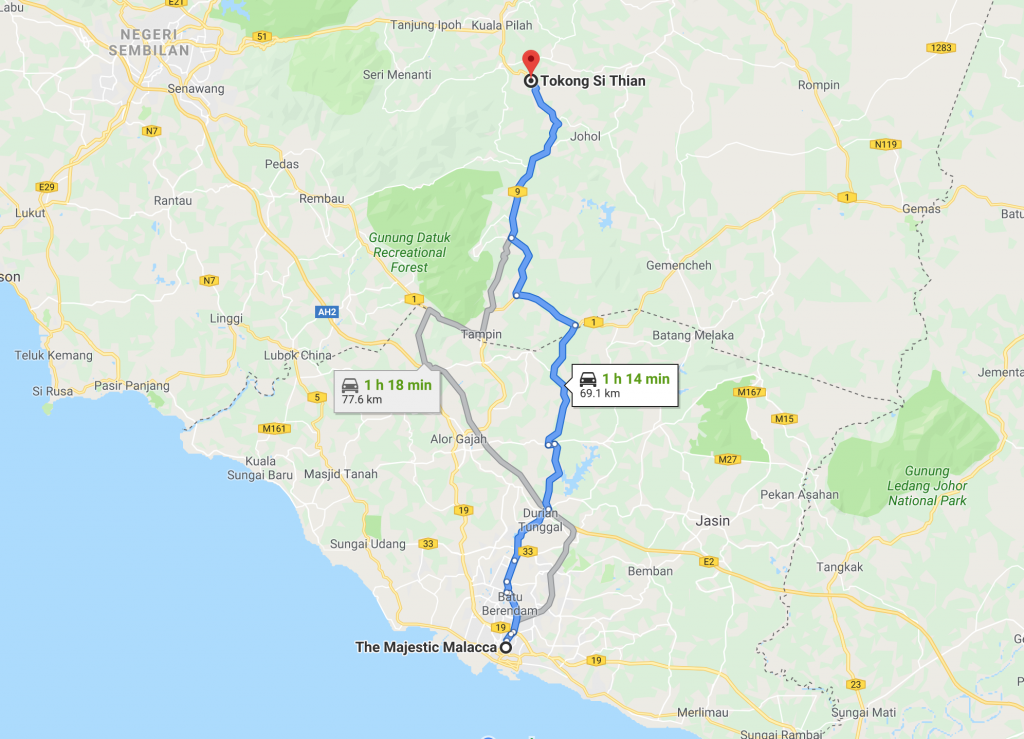 Leaving Melaka, we headed toward Durian Tunggal, instead of the usual Ayer Keroh way.

The road got twisty not long after we left Melaka. I wished I could see the faces under those helmets but am sure every Explorer was smiling. We locals ride this route just for the corners! There was whoops of elation from almost everyone when we stopped afterwards. 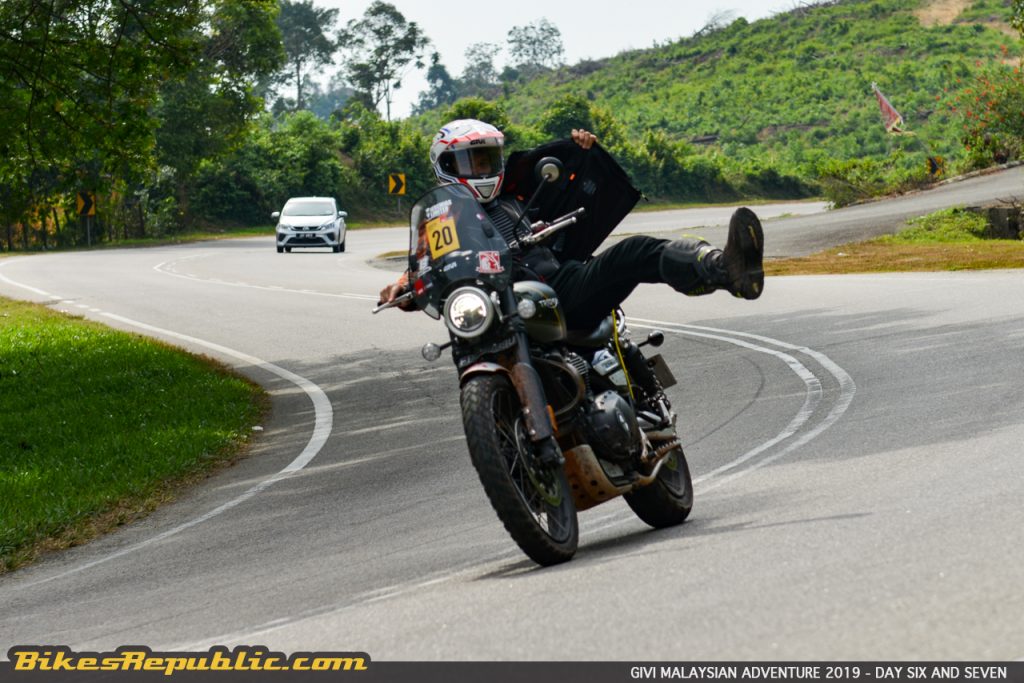 Everyone was having such a great time that we were already at the Si Thian Kong Temple in Johol. 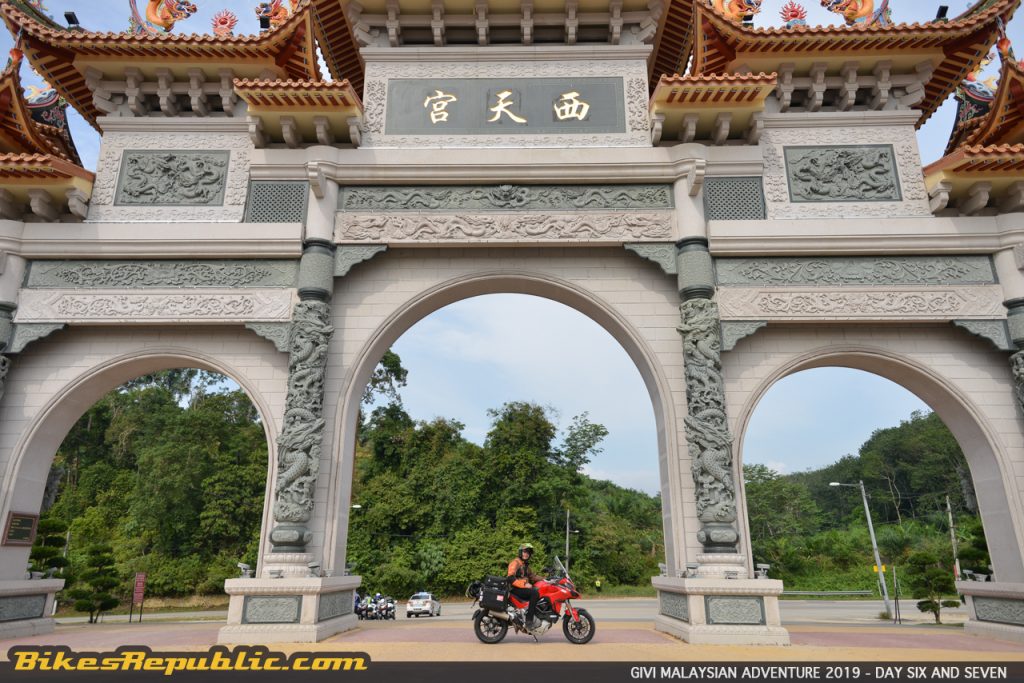 The site was just a clearing three years ago and a large temple complex has now taken shape. It’s not fully complete yet, but the main structures with intricate carvings were in place, including the worship hall. Two large Tao deities greeted us as we rode through the front gate. 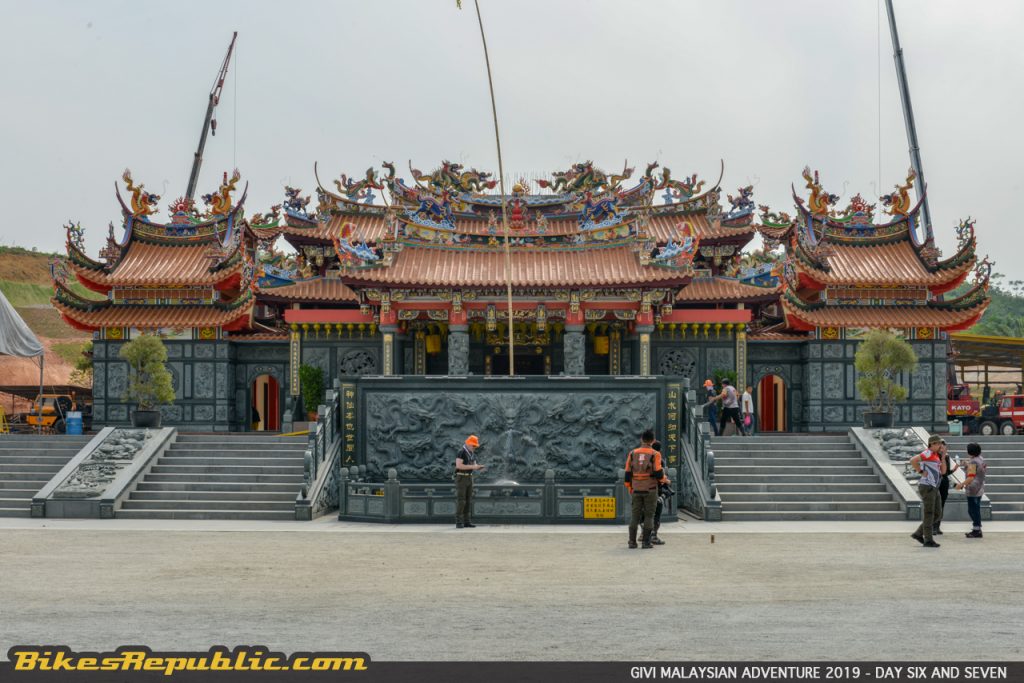 The temple is being built at great expense and it should soon rival some of the Taoist temples around Malaysia. 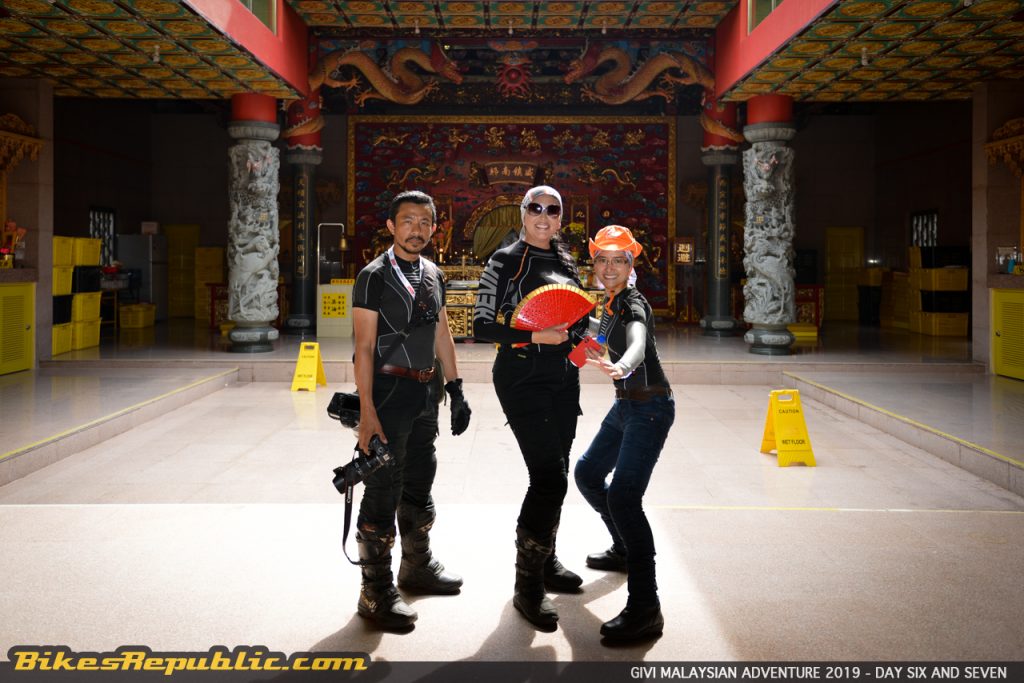 From here, the road turns into a mini racetrack style layout with chicanes, sweeping turns and decreasing radius corners all thrown in. Thankfully, the road has been resurfaced. 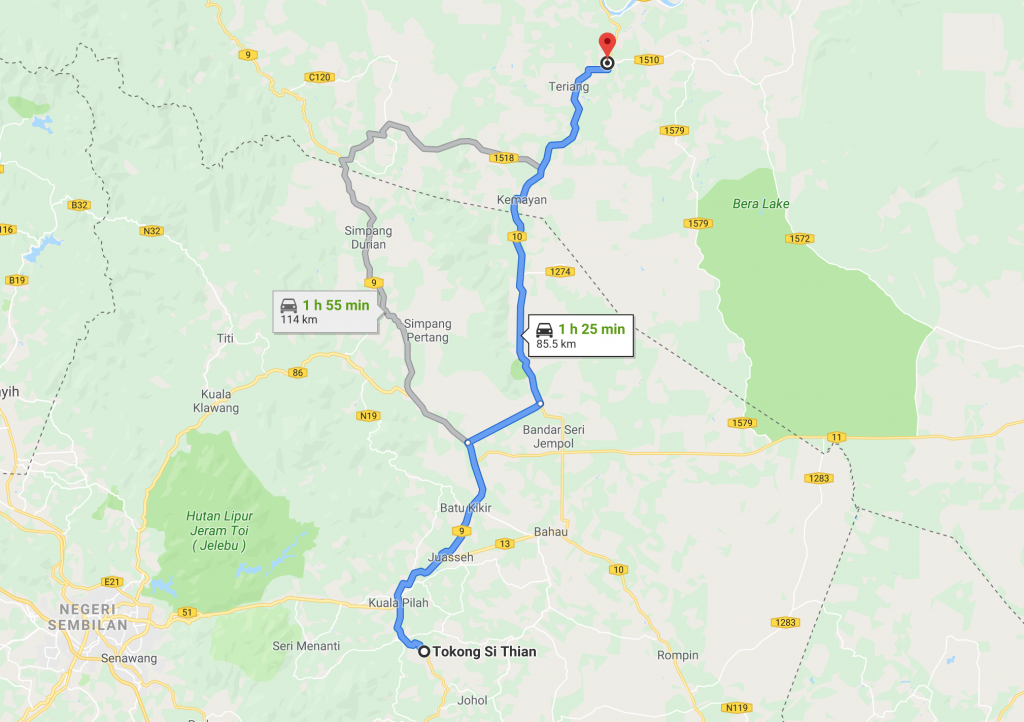 I personally worried about the convoy’s safety in negotiating two very tricky decreasing radius corners up ahead, but the Explorers were all experienced and good riders. The marshals also did a great job in controlling the pace, instead of letting everyone dive bomb the corners, kamikaze style. 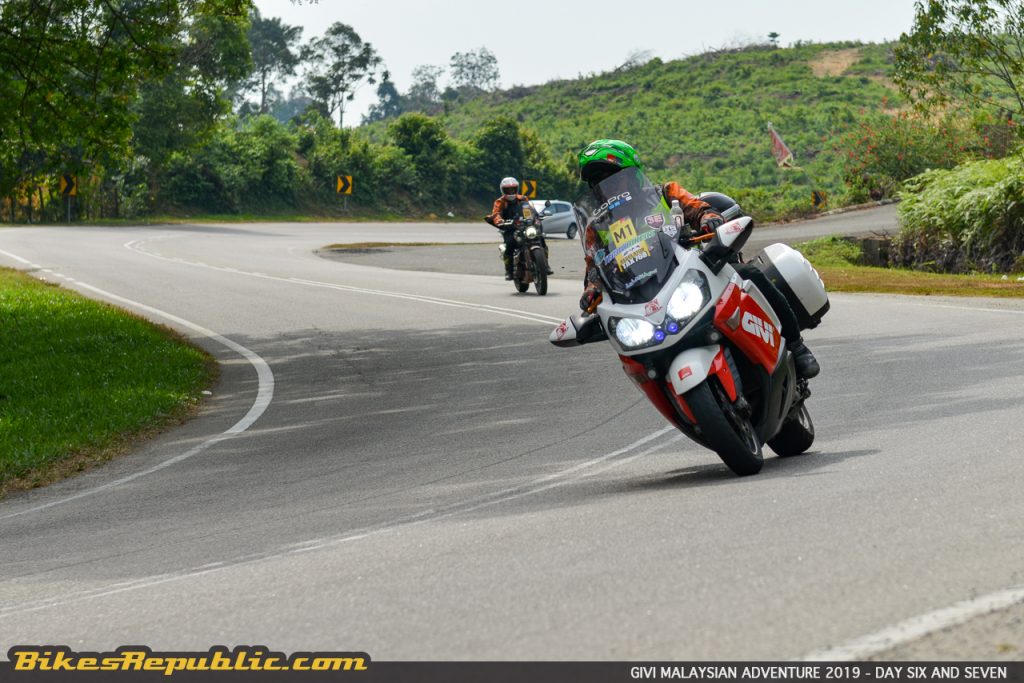 Past those corners, I started to get excited. Very excited. That’s because we were going to ride through Kuala Pilah.

Now, Kuala Pilah is pretty much unchanged for the last decade and it’s always hot. This sleepy town is my wife’s hometown and where we got married. It’s not everyday that 40 riders from 16 countries ride through, while being escorted by the police. I felt my pride welling up. 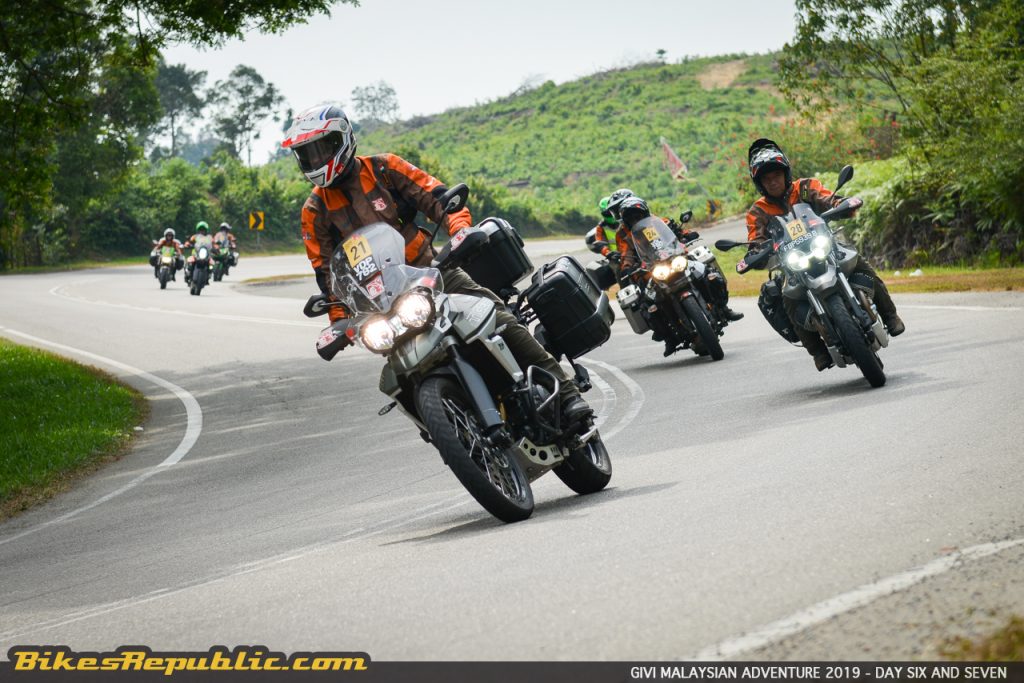 We passed Juasseh, then Batu Kikir before turning northeast to Route 10 which took us past Bera Lake and into Bera town for lunch.

Again, there were so many corners! In Bahasa Melayu we would say, “Korner sampai muntah,” which translates to “Cornering until we puke.” That’s to say it in a happy manner, of course.

We passed the Bera lake which was a shadow of its former glory, unfortunately. Many people missed it because instead of being a body of blue water, it now looks like a giant mud pit.

We stopped at a mamak restaurant in Bera for a quick lunch. 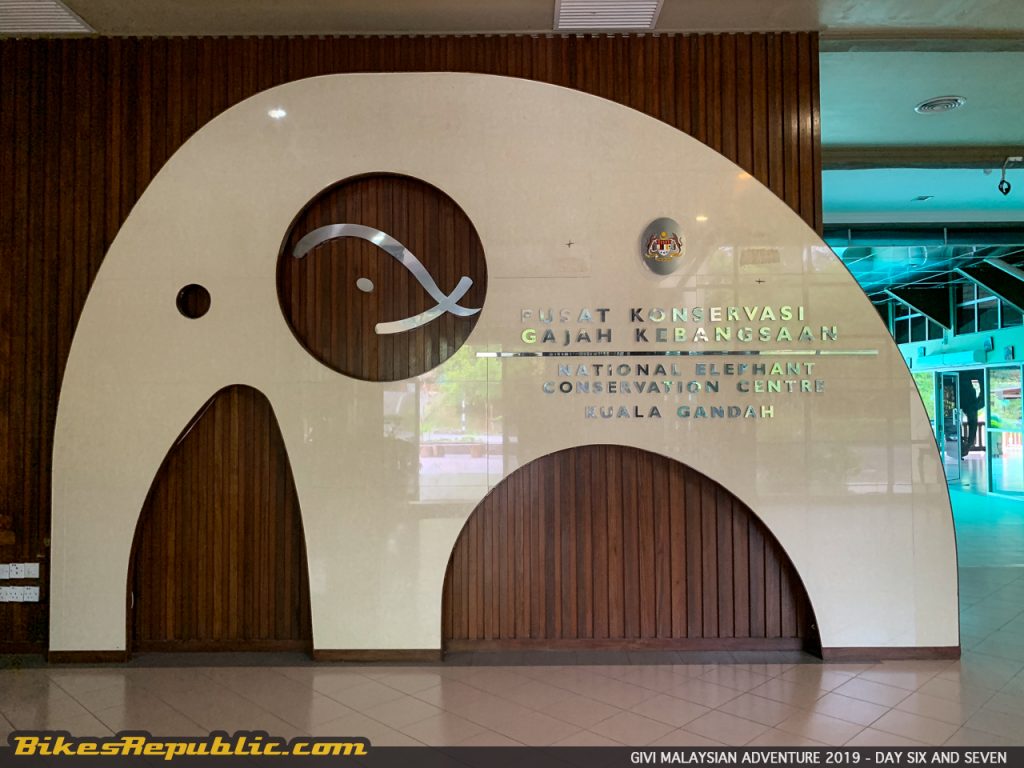 The National Elephant Conservation Centre is a must for anyone travelling along this route. This is where injured elephants are rescued and rehabilitated before being returned to the wild. It’s also from here that the mahouts (elephant handlers) mount missions to relocate elephants that are in vicinity of human settlements to the National Park (Taman Negara). Actually, it’s human encroachment, not the other way around. 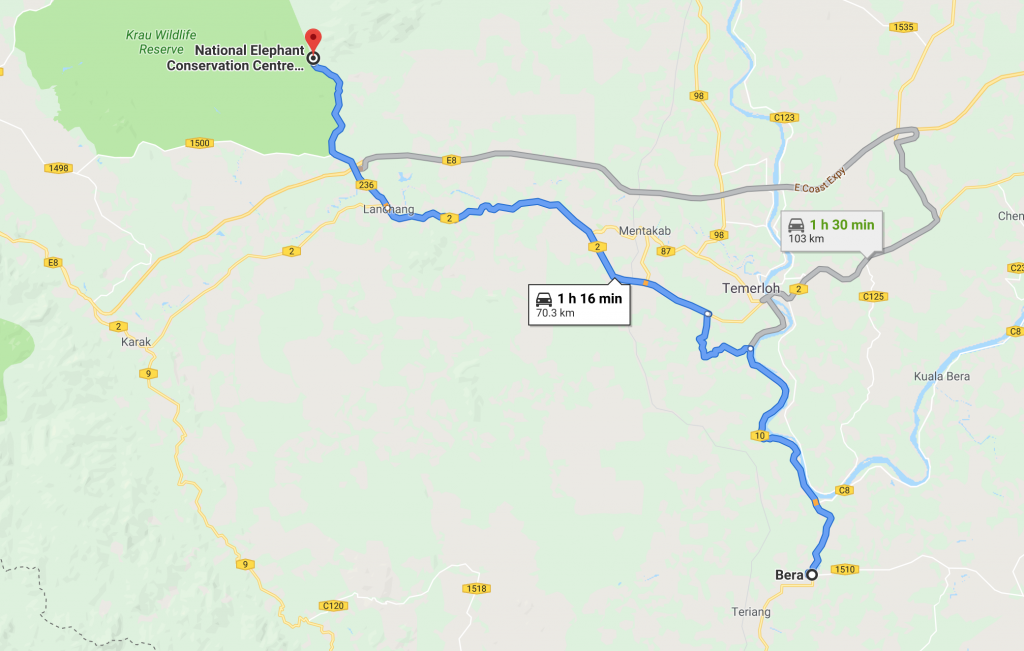 We were extremely lucky to have arrived at the time to bathe the elephants in the river! We swore we saw them smile when they hit the river. Bathing was carried out by the mahouts, not visitors, by the way. 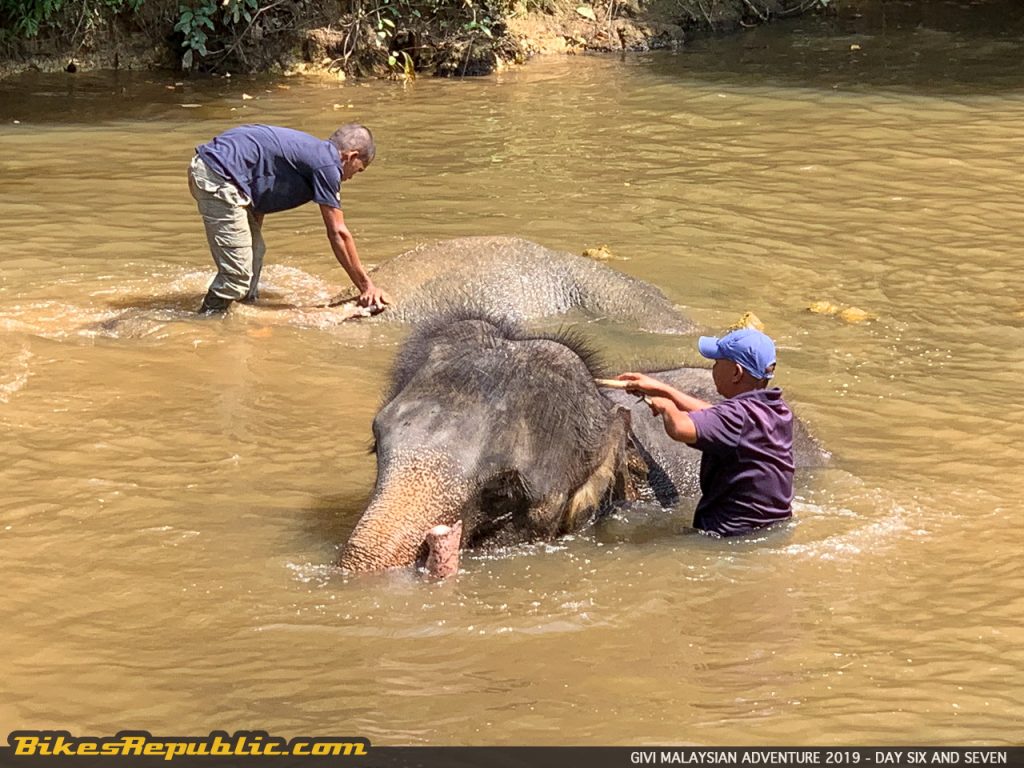 They then continued with an elephant show for educational purposes. One elephant was 60 years old! These elephants were rescued many years ago and are reared as guides to “talk to” wild elephants to be relocated. 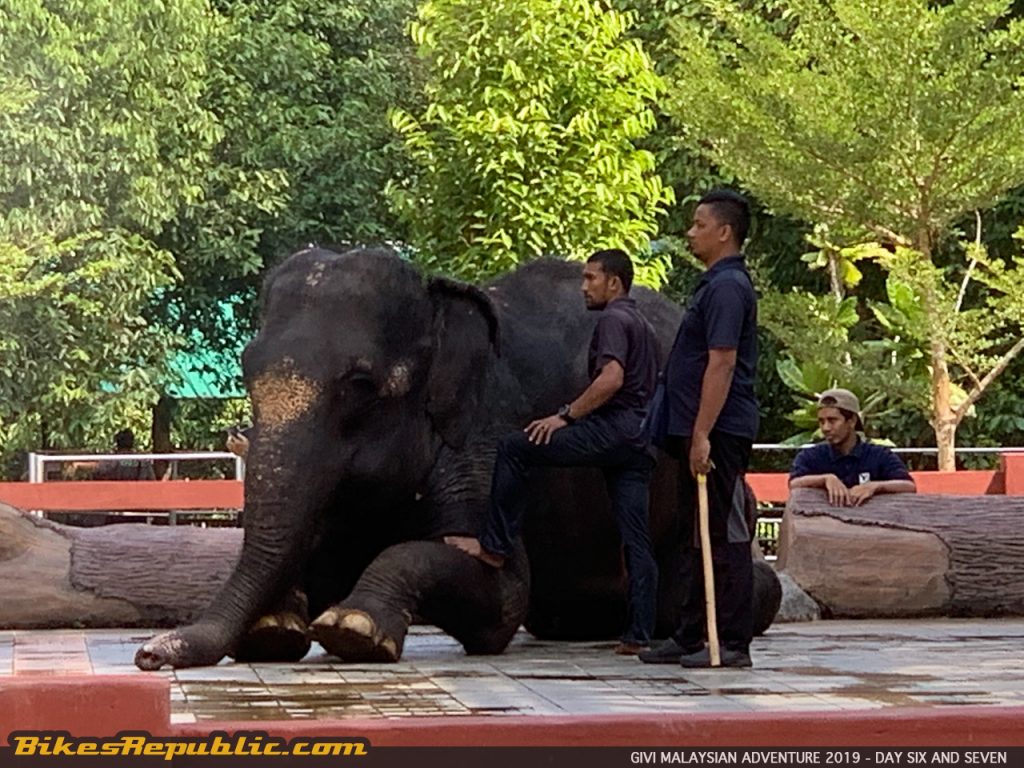 Lastly, visitors were given the opportunity to feed the beautiful animals with watermelons for lunch. 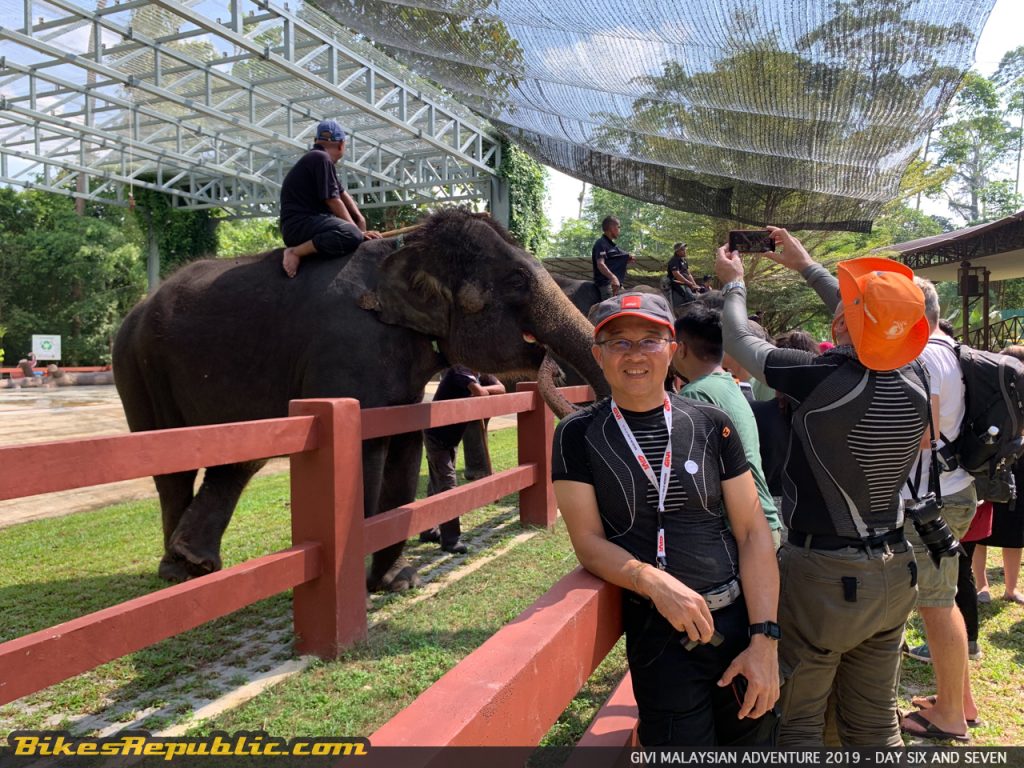 As a personal note, the centre has changed much since my last visit three months ago. It’s now much more organized and cleaner. A kind-hearted soul donated a large sum of money to renovate the centre. It’s great to see that the elephants in our country are well cared for. 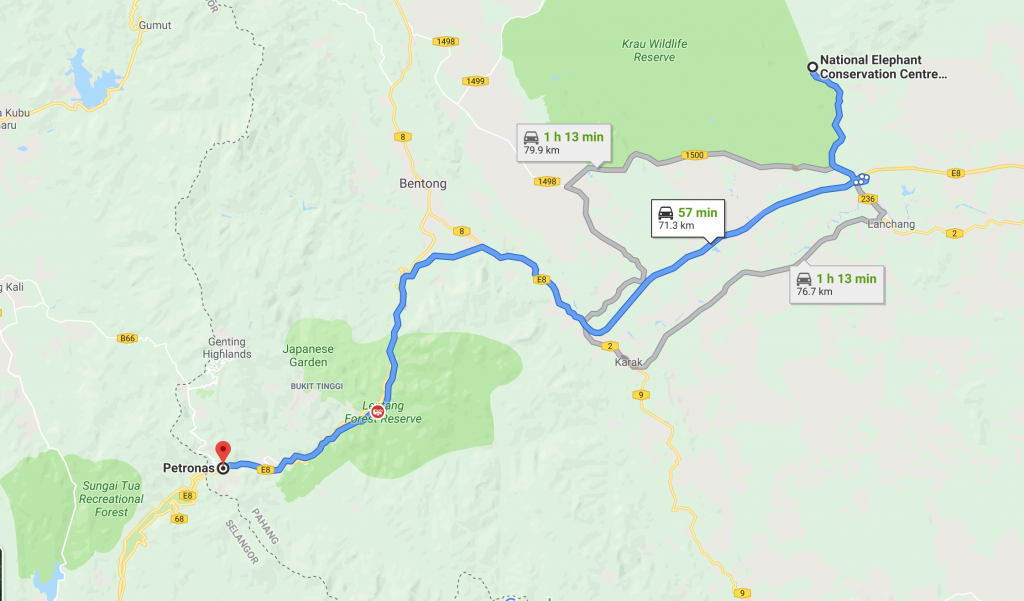 The final leg of the day took us to the site of GIVI Rimba Raid at Janda Baik 2019. The area was already a hive of activity, when we got there. The camping grounds were full and there were adventure and dirt-bikes everywhere. We had the option of riding into Rimba Valley ourselves on the dirt road, but there was took much traffic. So, the marshals helped us ride our bikes in to Kampung GIVI. 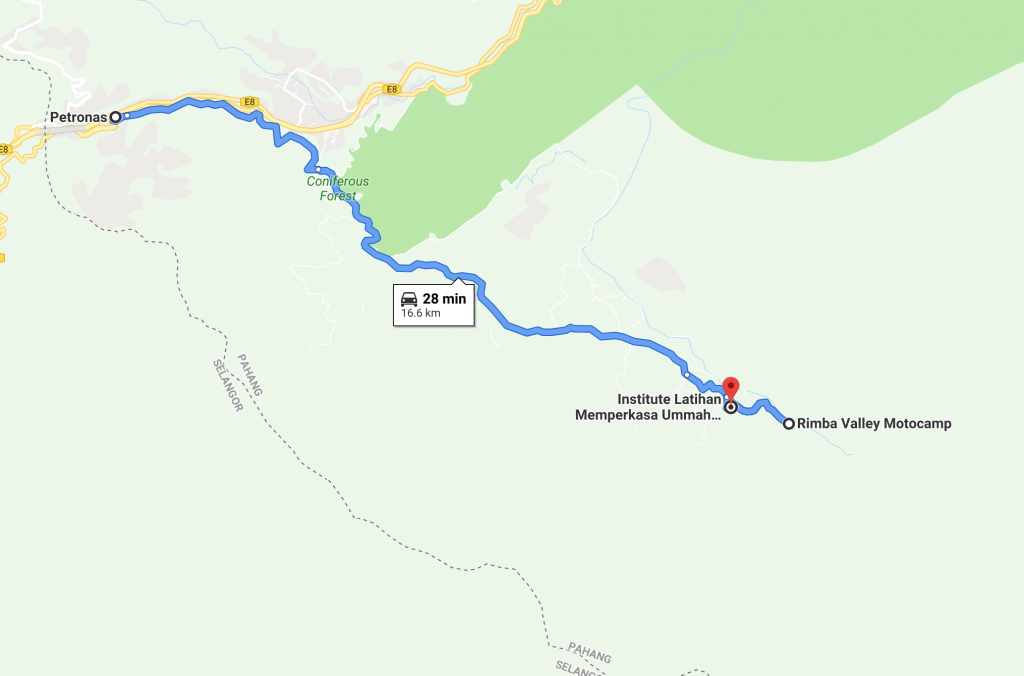 It’s great to see GIVI Rimba Raid being so colourful now. While it’s mainly an amateur event, GIVI’s presence, plus BMW Motorrad, KTM, Bombardier, et al certainly lent it a professional set up. This is important especially for competitors who travelled in from all over the world. 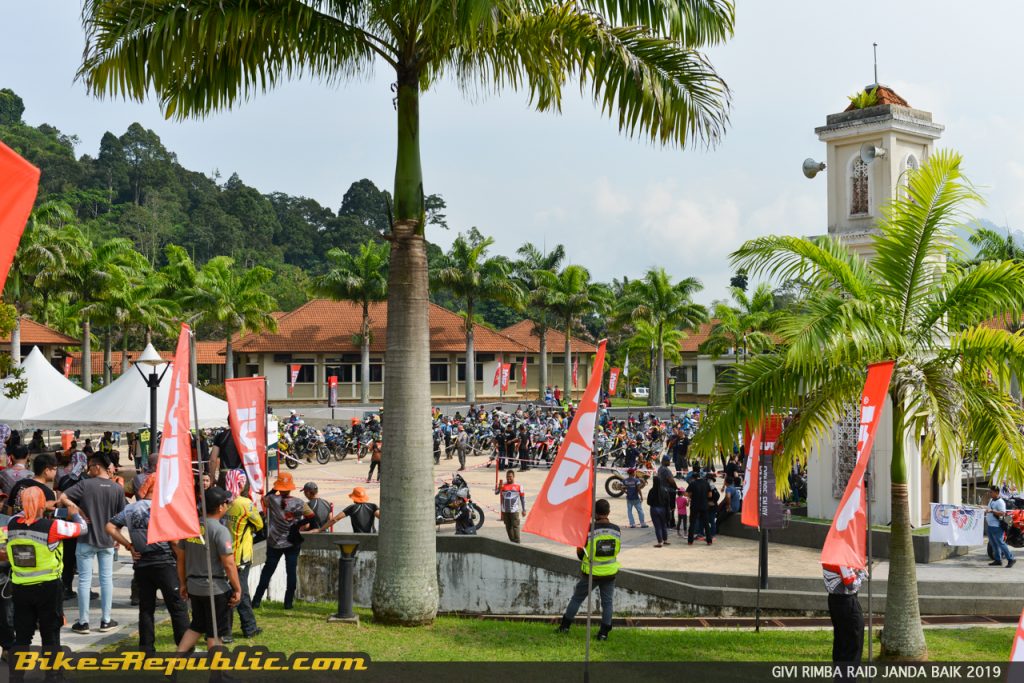 We mingled for a while before leaving the bikes at Kampung GIVI and headed to ILMU (which used to be UMNO’s indoctrination centre) to settle down.

We attended the GIVI Rimba Raid briefing at night. It was great to see so many familiar faces among the 150 riders here. 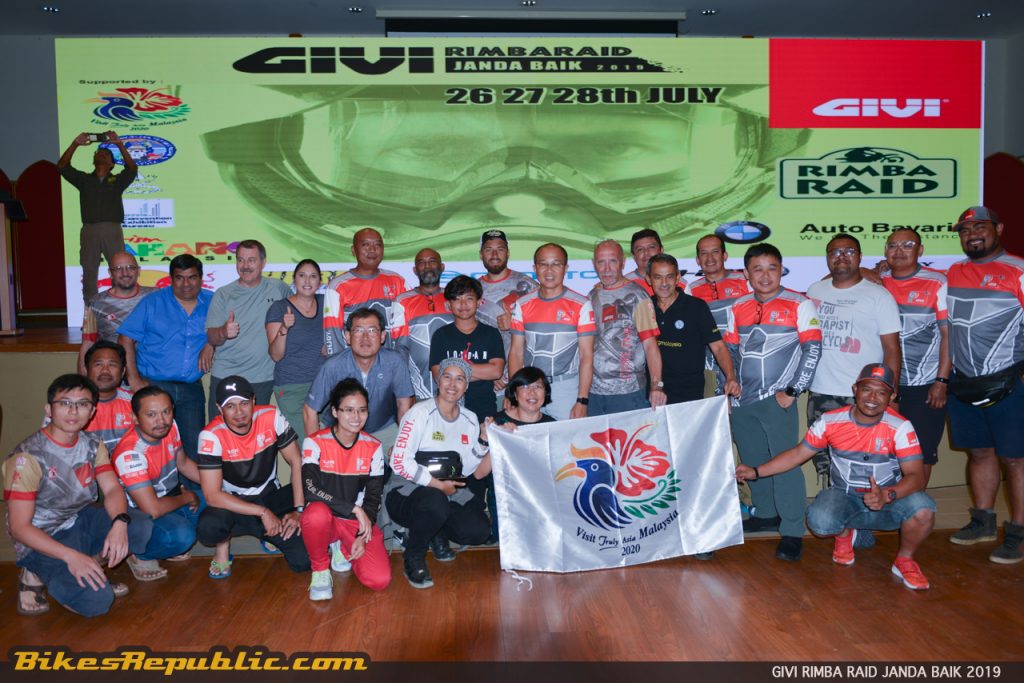 Please click on this link for our report on GIVI Rimba Raid at Janda Baik 2019.

Please click on this link for GIVI Malaysian Adventure 2019 Days Four and Five.

Please click on this link for GIVI Malaysian Adventure 2019 Kick Off.