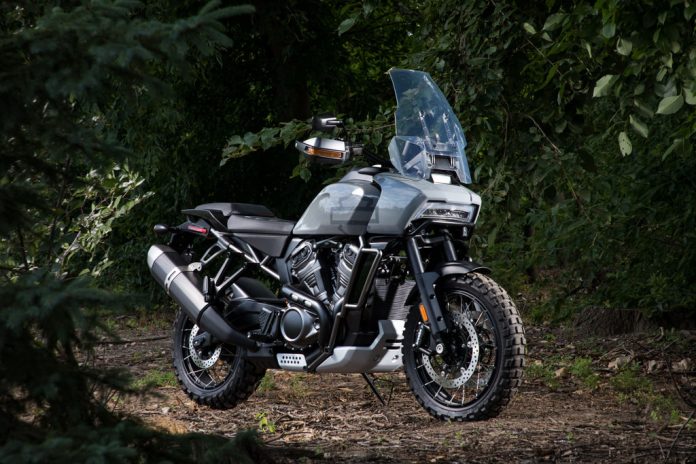 Wow, just wow. Wow again. Could anyone have ever imagined that Harley-Davidson would be producing something as radical and out of this world as this? Meet the Pan America, a dual-purpose bike by Harley-Davidson that has been confirmed for production.

Harley-Davidson’s have always stayed true to their design and heritage, and even when they built wild performance bikes, they still looked like a proper Harley. So it is good to see such an iconic brand breaking out of its self created mould and venturing past its comfort zone.

It is obviously an adventure-touring motorcycle, the likes of a BMW GSA or a Ducati Multistrada, this Harley-Davidson Pan America will probably be positioned upmarket to retain its exclusivity, but yet at the same time, be hardcore enough to take Harley owners to places they could never before venture into. Hello mud and sand and rocks and everything else that a Road Glide doesn’t like.

The Pan America is powered by the same 60-degree 1,250cc engine that is powering the also freshly introduced Harley-Davidson Custom. The engine may probably be tuned different to offer more pulling power typical of a dual-purpose motorcycle.

There are some other typical DP features here too, such as the trellis rear subframe, an aluminium skid plate, Brembo high-performance brakes, and a chain drive.

According to online reports but unconfirmed by Harley-Davidson, the frame uses a cast middle section that connects the swingarm and subframe with a large backbone. This then connects to the inverted fork. There is no information yet about the overall suspension package, but you can expect it to be comfortable.

Up front, the design of the bike is seriously unique. Love it or hate it, the blunt nose and long, horizontal headlight is typical Harley-Davidson, and the three-piece windshield is also adjustable.

Harley-Davidson has been making bikes that are able to comfortably crunch miles, so it is probably not too much to assume that the Pan America will probably be a very capable mile cruncher, considering the very wide and very flat seat.

As you can see from the promotional video below, the Pan America seems to be a very capable bike. And considering the fact that Harley-Davidson has massive resources and a very capable R&D department, the Pan America might just be seriously good at what it does from the get go. But whether or not it will be a true to form dual-purpose bike like the Yamaha Super Tenere or even the Triumph Tiger XCX remains to be seen.