Now here’s something that our sister site, MotoMalaya.net, recently scooped. It appears that the Naza Bikes brand will be expanding its range further after teasing what appears to be a new Naza Bikes N5 R model through its Facebook page.

You can expect the same liquid-cooled, twin-cam 249cc single-cylinder powertrain from the Naza Bikes N5 naked to remain unchanged in its full-faired N5 R sibling as well. Just to refresh your memory, the mill powering the N5 outputs 28.4hp and peak torque of 26.1Nm to proper its claimed kerb weight of 145kg.

Through the teaser images, we can see that the upcoming Naza Bikes N5 R will also likely retain the same braking setup as the N5 that’s comprised of a 300mm wavy single-disc up front with quad-piston calipers and a 230mm disc at the rear paired with dual-piston calipers.

Besides that, we can also expect changes in the riding ergonomics for this sport-bodied model as oppose to its standard naked sibling. Most notable here will be the lower clip-on handlebars and repositioned footpegs.

In terms of pricing, expect the Naza Bikes N5 R to be priced slightly higher than its N5 naked sibling’s figure of RM13,988*. This is pretty normal for bikes in the segment with the price difference between the rivalling Kawasaki Ninja 250SL and Z250SL twins being an example. 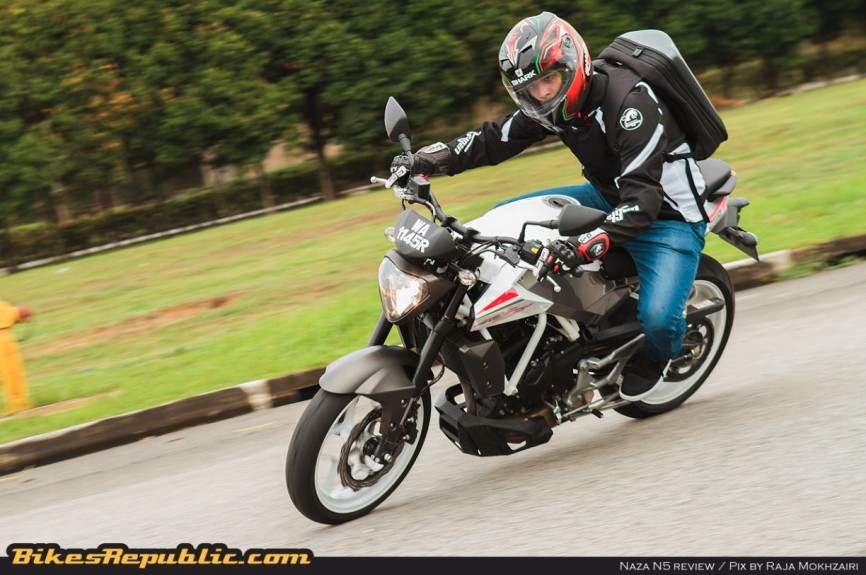 We’re keeping close tabs on this as it progresses so stay tuned to BikesRepublic.com and MotoMalaya.net for more updates. In the meantime, you can check out our past review of the Naza Bikes N5 naked by clicking here to have an idea of what to expect with this rebadged Korean motorcycle.