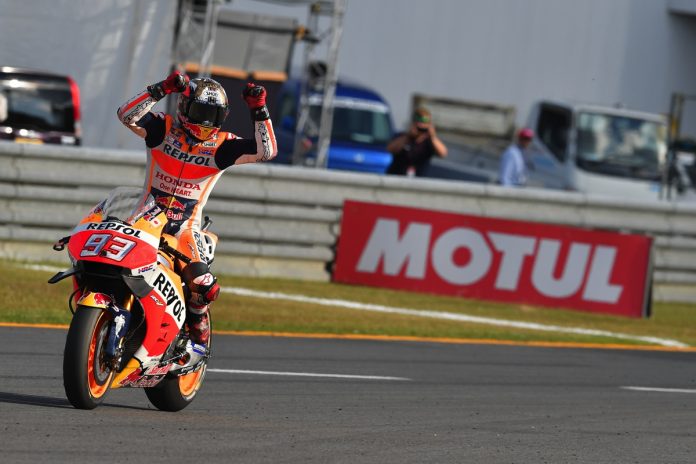 What was supposed to be the start of a thrilling triple-header of fly-away races came to a climactic – or anti-climactic for some – conclusion in the twin Ring Motegi during last weekend’s Japanese Grand Prix. 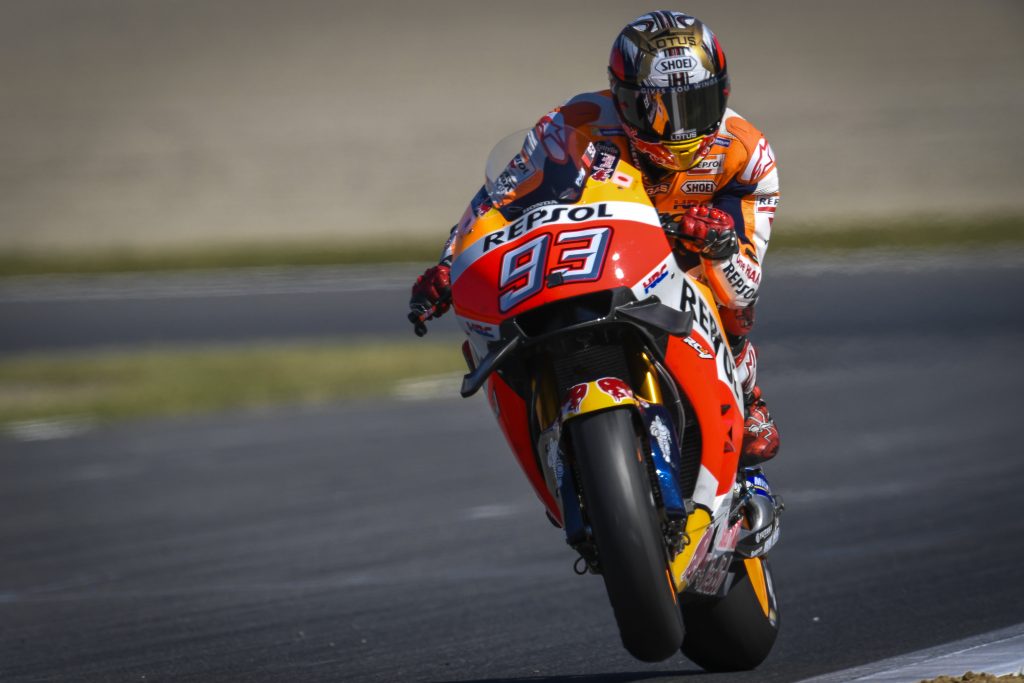 MotoGP – Crowning of a champion
For the lead factory Yamaha duo of Valentino Rossi and Jorge Lorenzo, the Japanese Grand Prix was perhaps the last chance for either to give Repsol Honda’s Marc Marquez an adequate challenge for the 2016 crown. 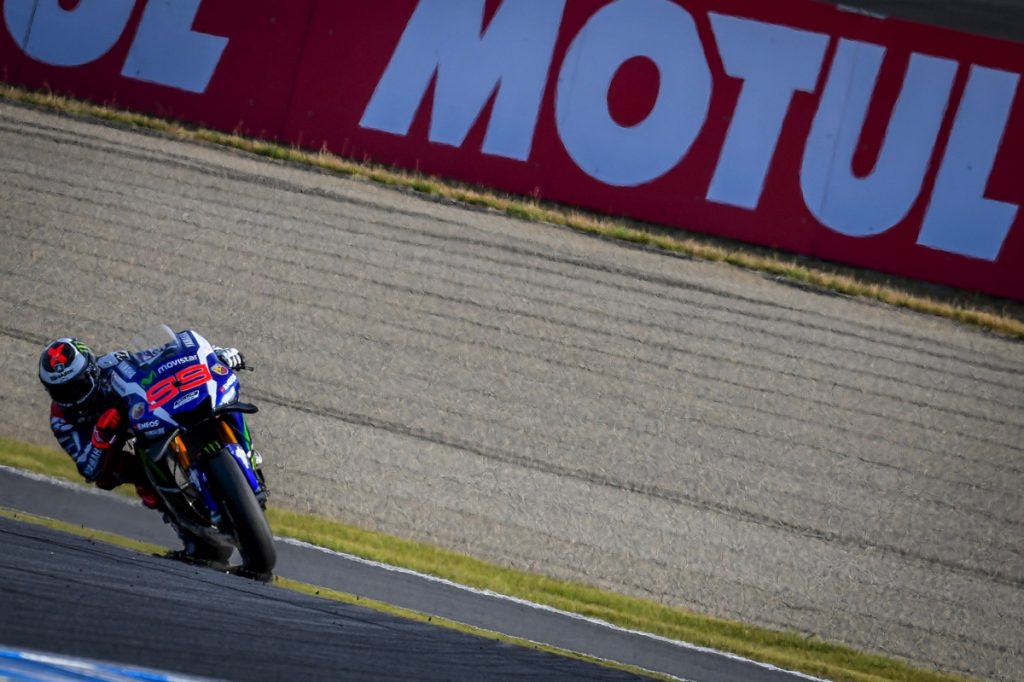 As the lights went out to start the 24-lap race, Lorenzo had the initial advantage as he started from third on the grid. But perhaps the pain from injuries sustained during practice earlier in the weekend proved too much to bear as he gave up the race lead back to Marquez on Lap 4. 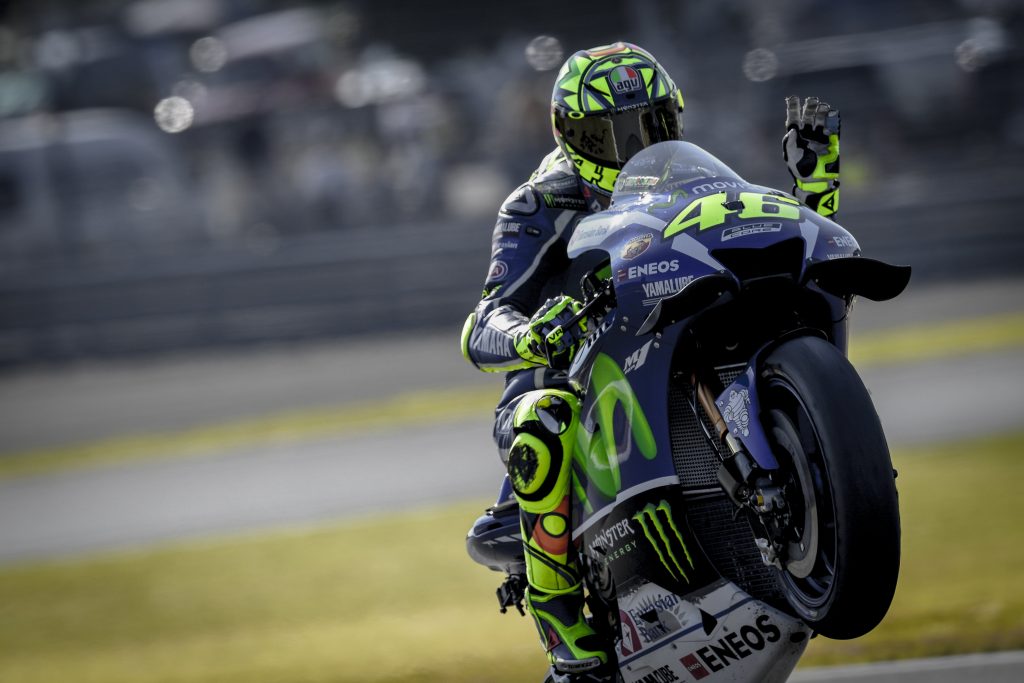 Though battling fatigue and jet lag, Rossi tried his best to keep the title race somewhat alive. He had the upper hand with his pole position start initially, but Marquez’ pace was simply too quick for the veteran Italian to match. 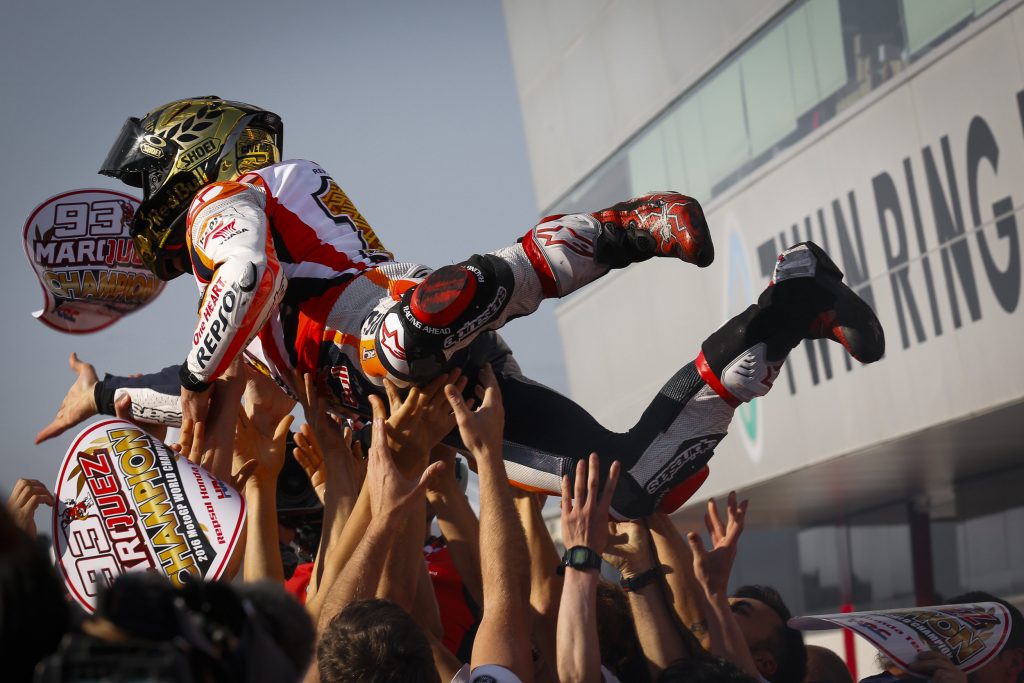 The turning points came when Rossi fell first on Lap 6 whilst in second place. Next came Lorenzo’s crash on Lap 19. With both factory Yamaha riders low-siding out of contention, the race and the title belonged to Marquez. 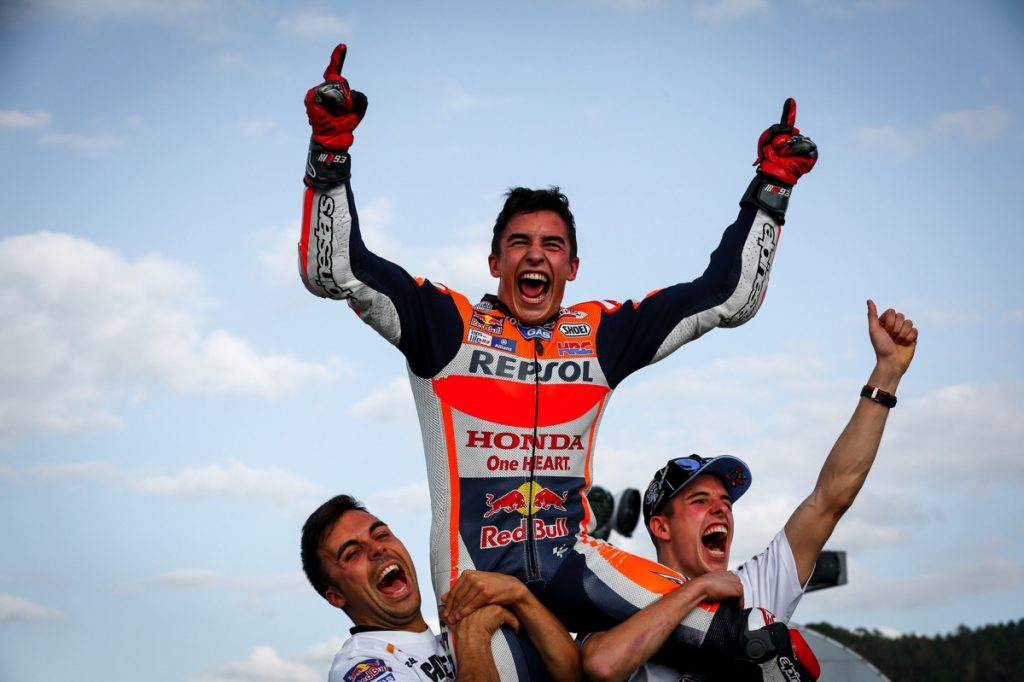 Not only did Marquez finally broke the Twin Ring Motegi’s ‘curse’ upon him by taking his first GP win at said track, he also took a sensational home win for the Honda Racing Corporation (HRC) as it celebrated its 50th anniversary of competing in MotoGP. 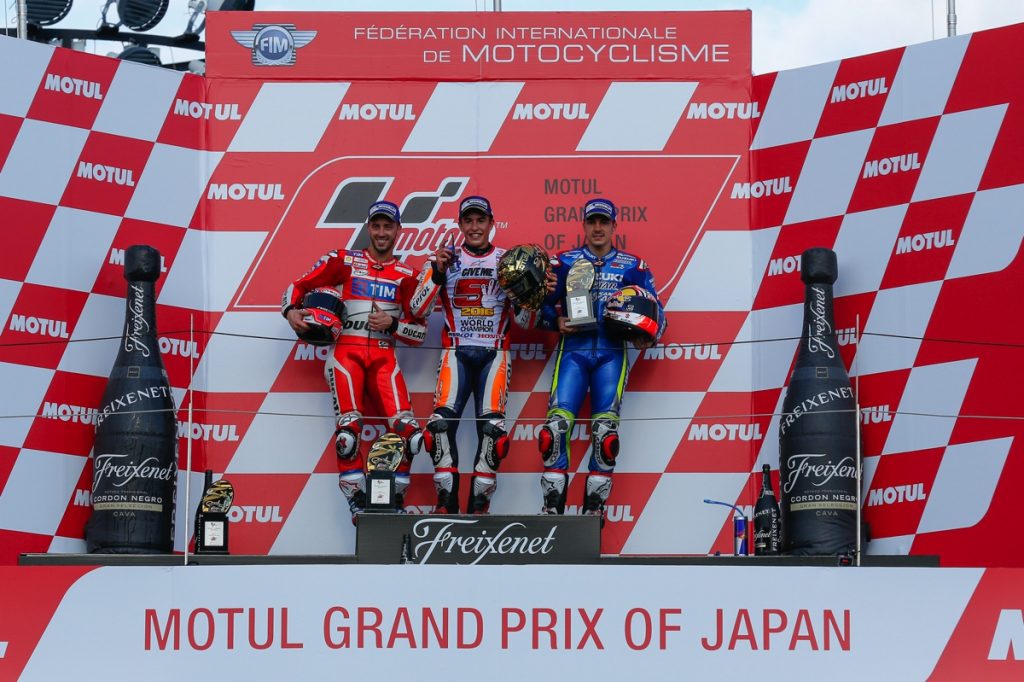 Joining Marquez on the podium was Italian rider Andrea Dovizioso who finished second astride the lead factory Ducati machine. Completing the rostrum was young Spanish sensation – ironically called the next Marquez – Maverick Viñales who finished third astride the Team Ecstar Suzuki factory machine. 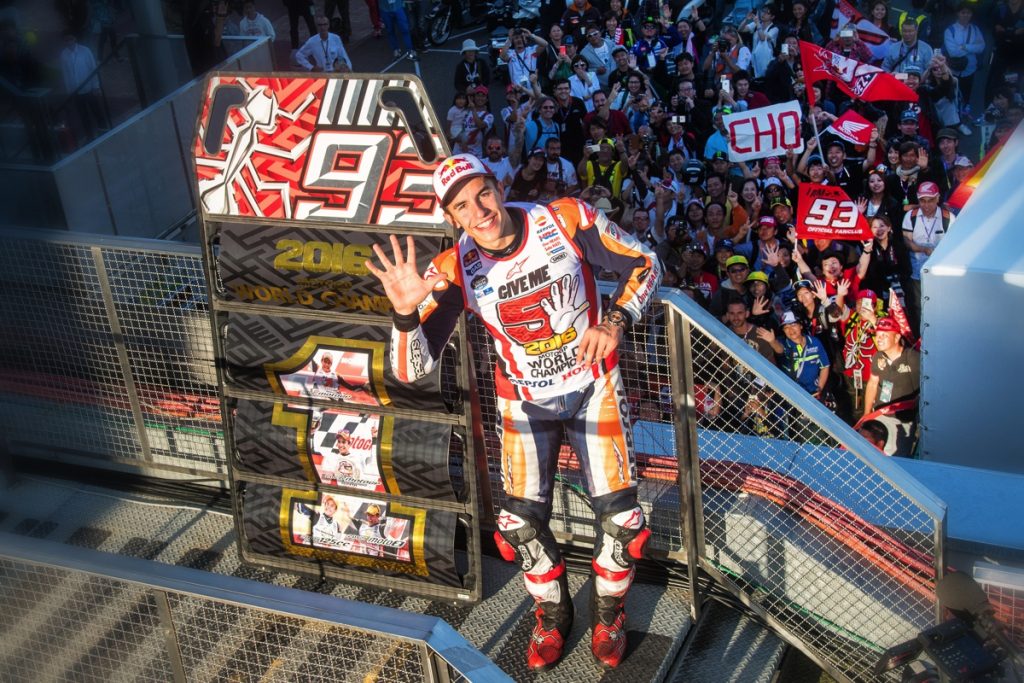 And to sweeten things further, Marquez had all the points he needed to secure the 2016 world title with 273 points in hand. He now stands as the sport’s youngest ever rider to score three MotoGP world titles at the tender age of just 23 years old. 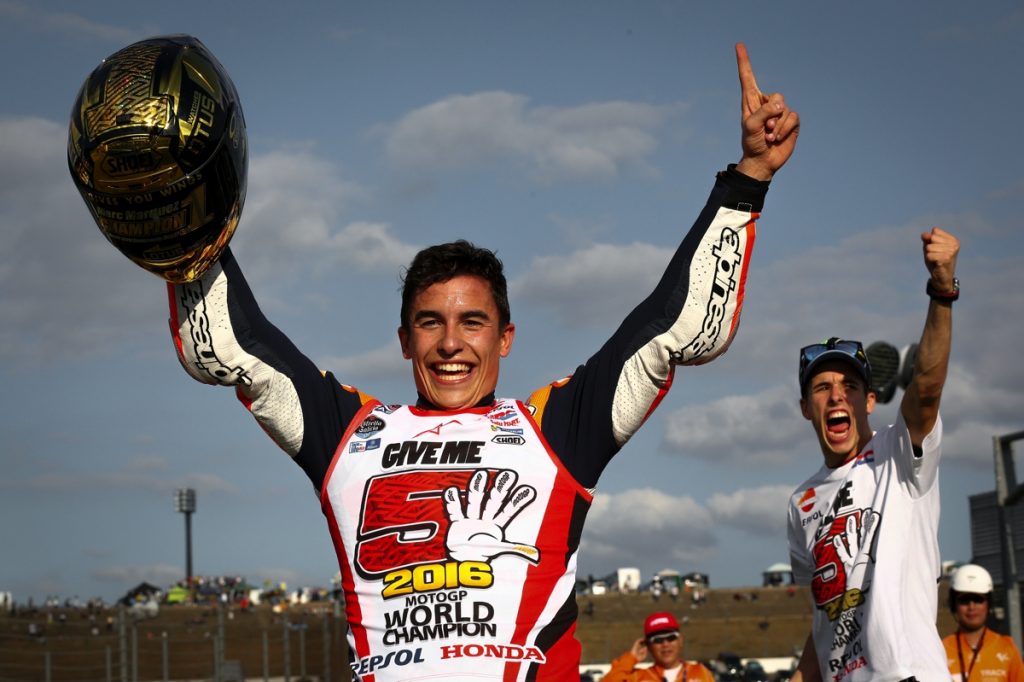 Along with his previous two MotoGP titles from 2013 and 2014, as well as his 2012 world Moto2 title and 2010 world 125cc title, Marquez is now credited with five world championship crowns altogether. He’s also dubbed as the sport’s youngest and most successful multi-title winner at that too.

With the 2016 rider’s title secured, the remaining battle for the constructors’ and team’s awards, not to mention the runner up and second runner up positions, will continue in Australia, Malaysia and Valencia. 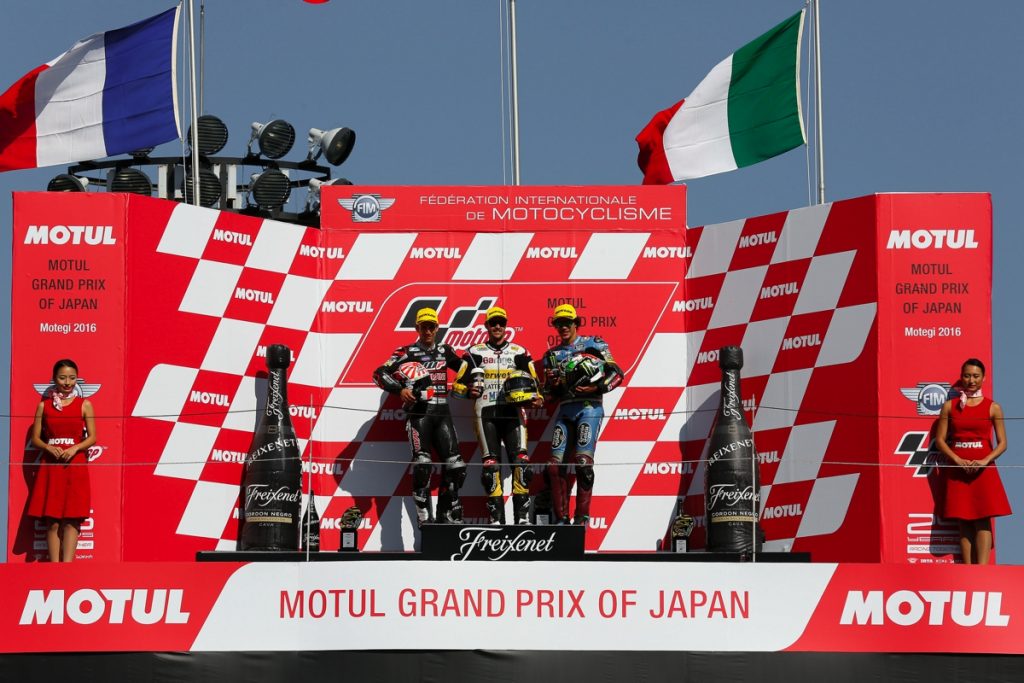 Moto2
In the supporting Moto2 race, it appears that the fight to become the class’ first repeat champion is still alive for Frenchman Johann Zarco. The Ajo Motorsports rider took pole position after Saturday’s qualifying and eventually settled for second place in Sunday’s race. 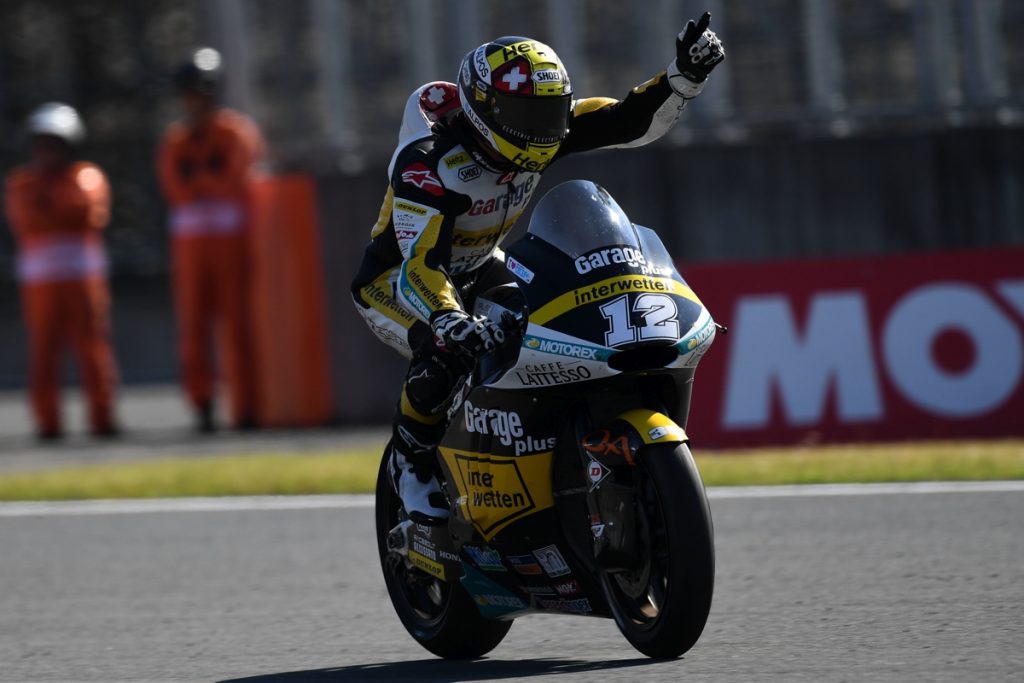 The win belonged to Garage Plus Interwetten team pilot Tom Lüthi. The Swiss rider won in sensational fashion after storming up the lead from second on the grid and commanded the race until the chequered flag. Completing the podium was Italian rider Franco Morbidelli who rode the Marc VDS machine into third. 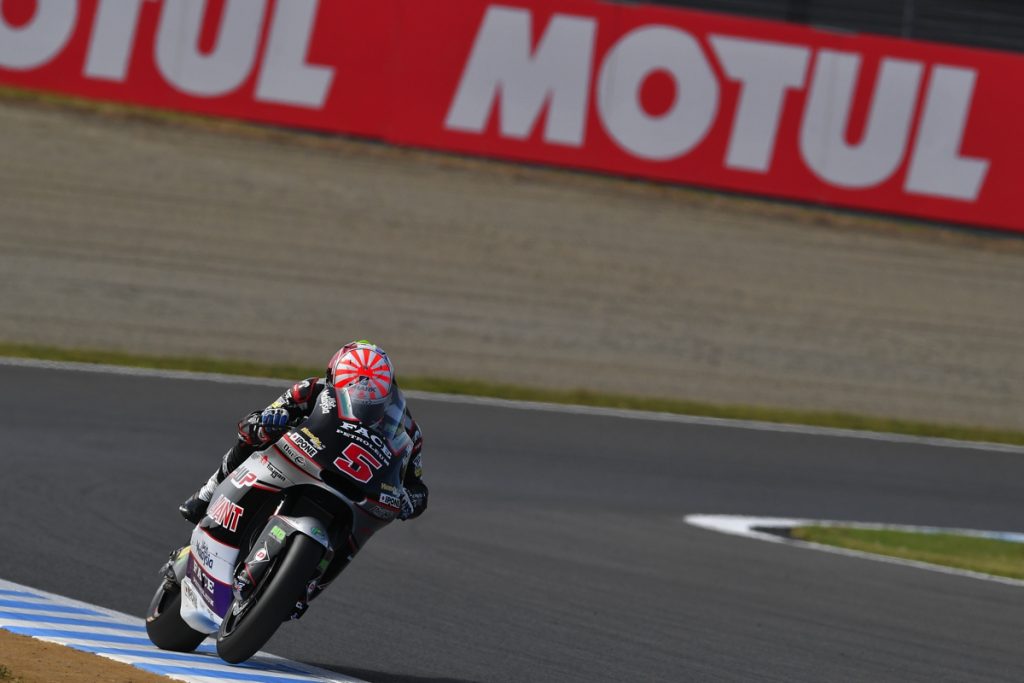 With both his rivals Sam Lowes and Alex Rins crashing out in Motegi, Zarco looks just about ready to successfully defend his class title before leaving for MotoGP. Zarco leads the standings with 222 points while Rins is second with 201 points. Lüthi now moves up to third with 179 points.

Moto3
Last but certainly not least came the thrilling action from the lightweight Moto3 class. Though this year’s champion was already crowned in the last round, it did little at extinguishing the class’ renowned thrilling battles. 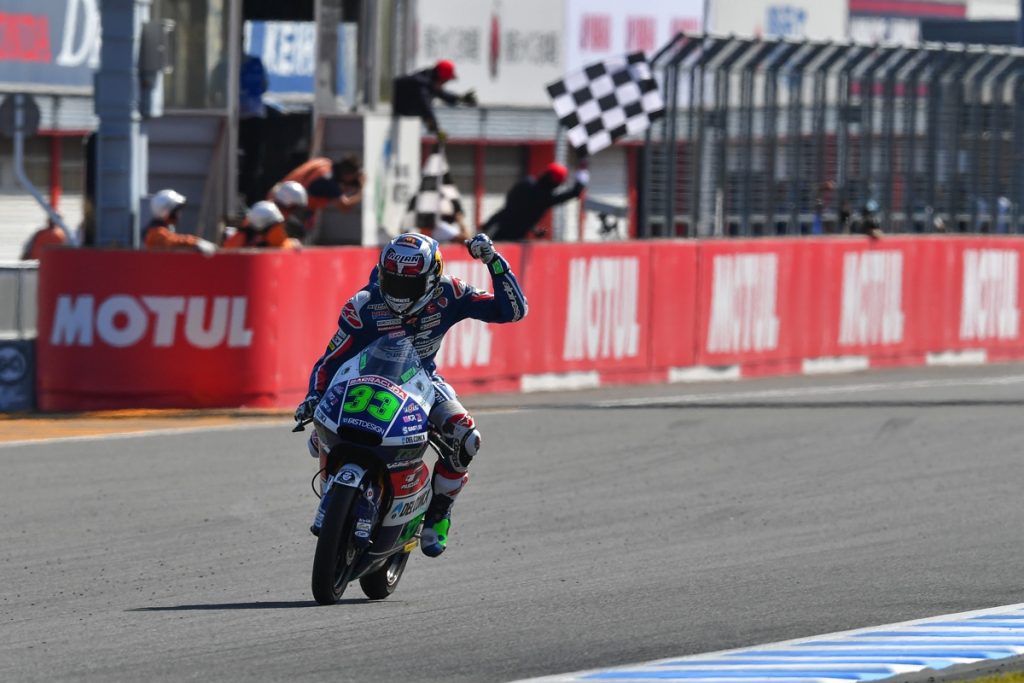 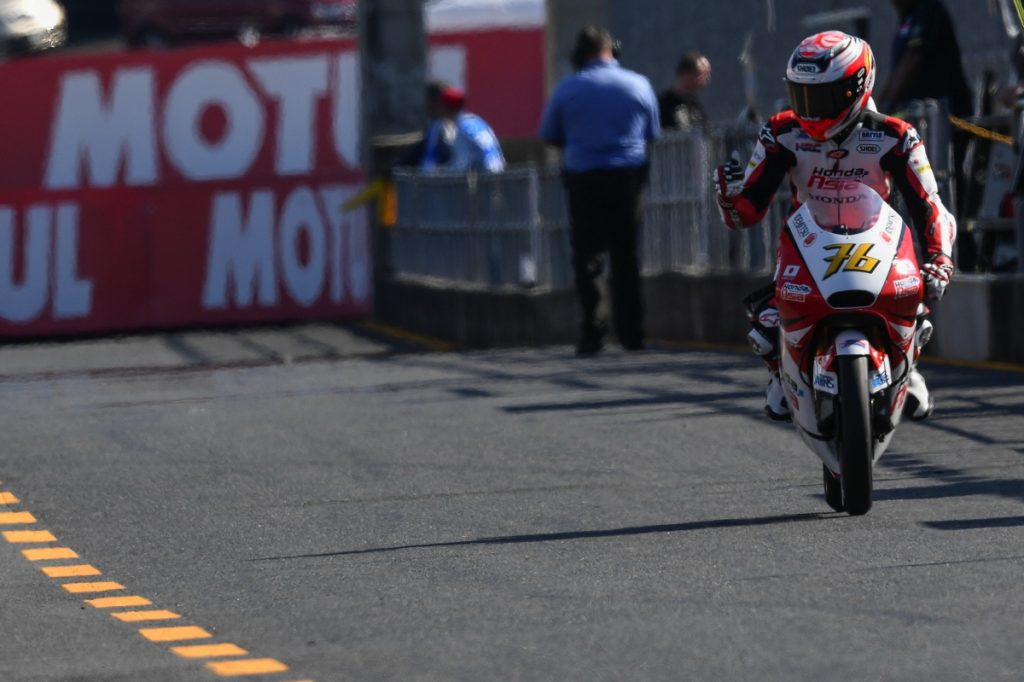 Taking the final podium spot initially was Japanese rider Hiroki Ono who rode his Honda Team Asia machine sensationally up to third. But stewards later disqualified him after he was found to be underweight in the post-race weigh in. 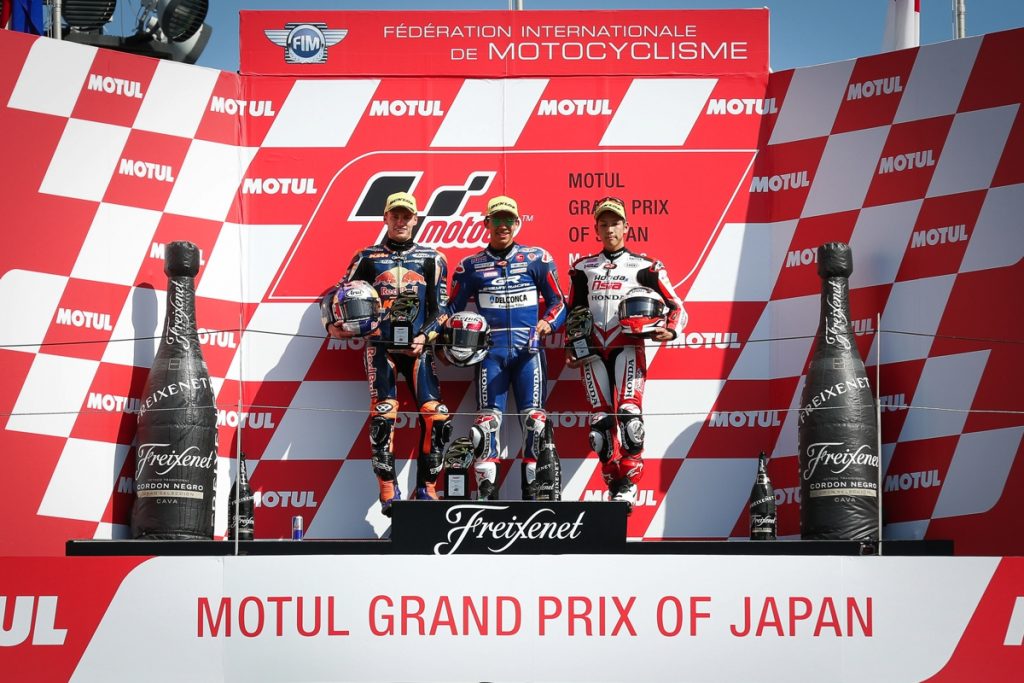 Round 16 – Phillip Island, Australia
Coming up in less than seven days is the second of the fly-away triple-header, this time in the revered and technically challenging Phillip Island circuit for the Australian Grand Prix.

One of the top favourite circuits amongst many riders, this is one race not to be missed. Sunday’s raceday broadcast begins with Moto3 at 10:00am, followed by Moto2 at 11:20am and the premier MotoGP class at 1:00pm.

(All times stated are local Malaysian time. Refer to your local broadcaster for more info)