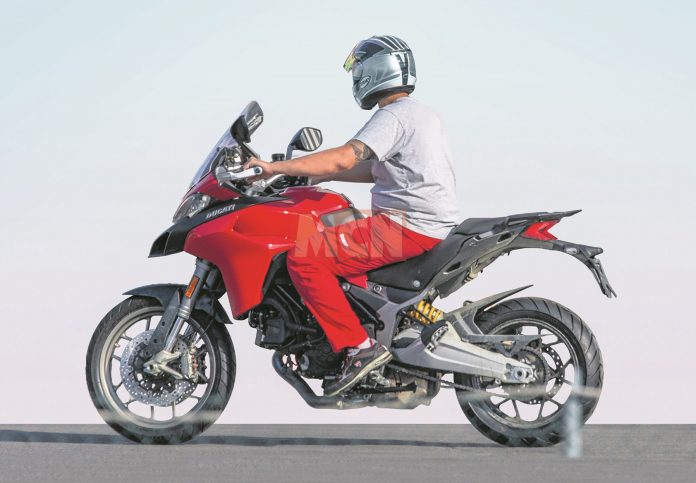 The Ducati Multistrada 950 is a more accessible option to Ducati’s sport-tourer line-up in both pricing and operations.

Compared to its big brother the Multistrada 1260, the Multistrada 950 is much simpler. Riders do not have to contend with fiddling around with the electronics, that’s for sure. Indeed, we have come across many riders who don’t have any idea on what they’ve set on their bikes.

So, the Multistrada 950 is in some ways a better and more versatile bike. But it’s definitely time for an update to keep it in the game.

The upper fairing now matches the Multistrada 1260’s and swingarm is of lighter grey than the current version.

The engine looks similar outwardly, but the new bike will apparently receive a new hydraulic clutch. The Scrambler has gone that way, so we expect the Multistrada to follow suit. The engine may also be updated since there is a new Hypermotard on the way. If so, we ought to see a power increase to 120 bhp. There could be a bi-directional quickshifter, too.

The new Multistrada 950 may well receive an Inertial Measurement Unit (IMU), enabling Cornering ABS and lean-sensitive traction control. These will open up the bike’s safety spectrum together with the present ride modes.