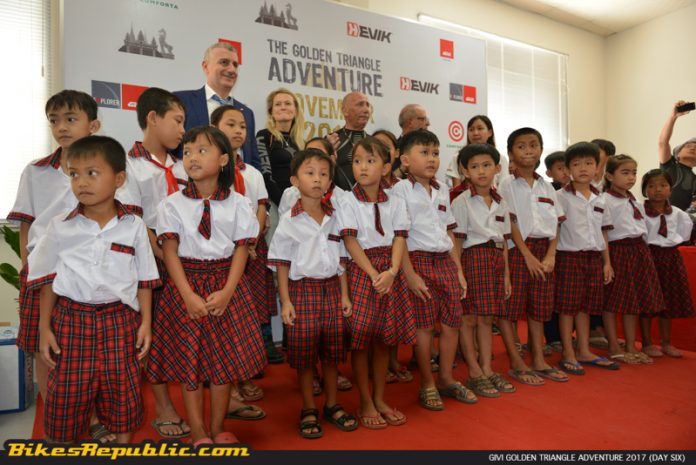 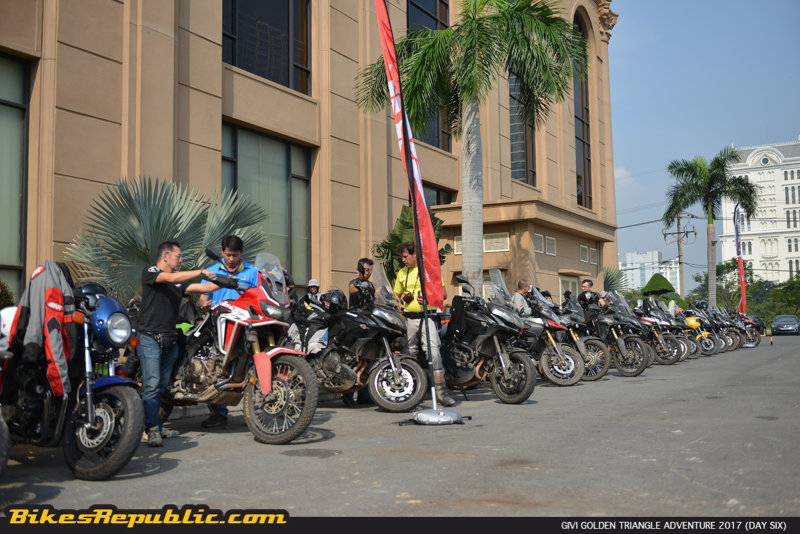 We were slated to visit GIVI’s factory in Vietnam, situated not far away from the hotel, where we were going to see not only how some of GIVI’s products were made, but more importantly, to attend a special Corporate Social Responsibility (CSR) program. 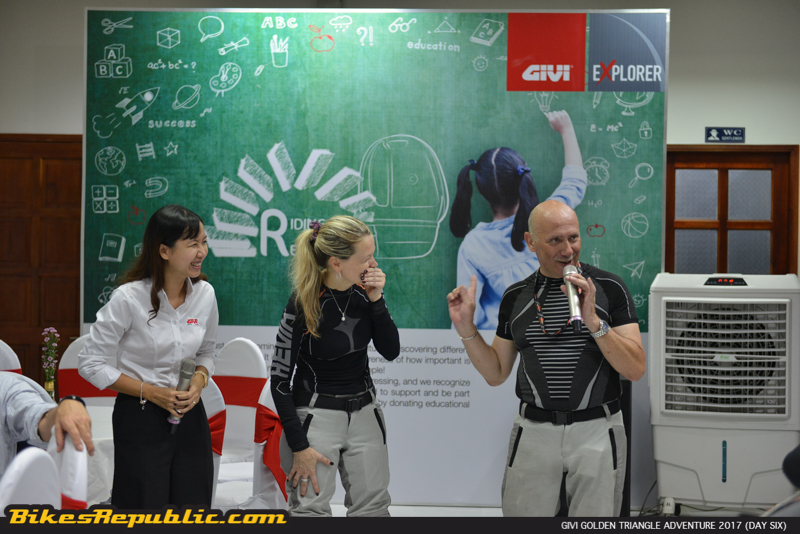 We left the Merperle Crystal Palace Hotel at little later than usual, with the sun already up and shining. The rider with CBR600RR was back and we sure hoped he knew which way we were headed. We were worried about running headlong into HCMC’s traffic, that’s for sure.

We travelled on city roads for a short distance before we started veering into a smaller road flanked on the left by one-storey houses and a river on right. The road condition was good, despite a few patches covered in gravel awaiting their asphalt cover. Hot and dry conditions meant the lead bikes throwing a thick cloud of dust into the air.

Soon we arrived at the GIVI Vietnam HQ and were welcomed by the smiling staff. We were ushered directly to the large entrance to the factory, where a reception had been prepared with light snacks and drinks. We attacked the bottles of water and Pepsi as if we had just left the desert. 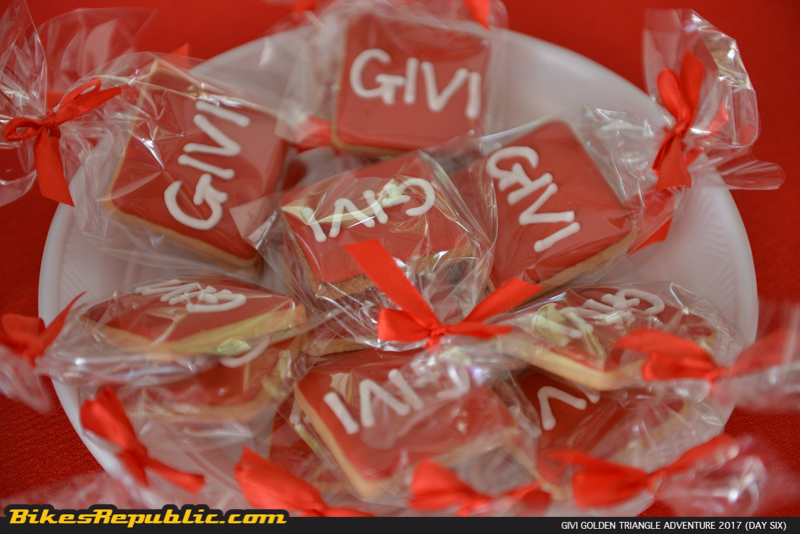 Also, there were the Italian Ambassador to Vietnam and the Head of the Italian Trade Delegation, along with Hendrika Visenzi. 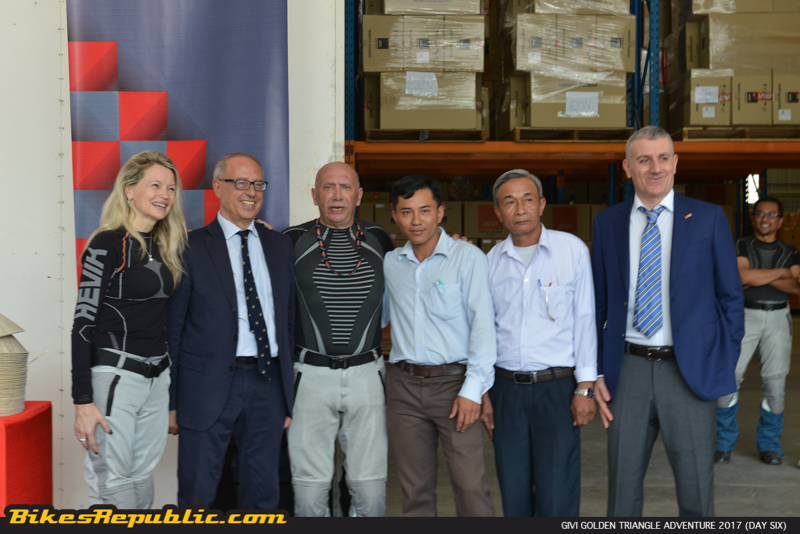 Two of the Vietnamese crew had dressed up in the traditional Vietnamese dress, called áo dài (pronounced “Ao-Yai”). Yes, they were pretty. 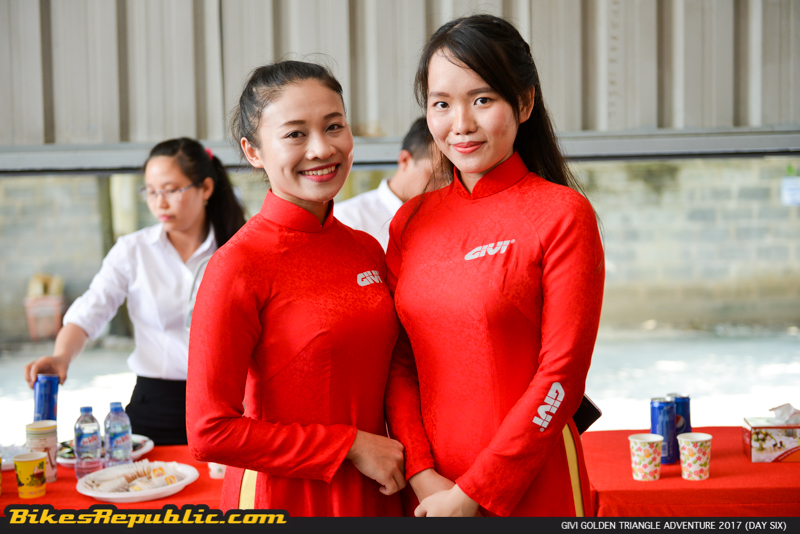 The GIVI Explorers were then separated into two groups for a grand tour of the facilities. Our group was led by Giorgio Della Rosa, the Factory Manager and designer of GIVI’s riding gear. 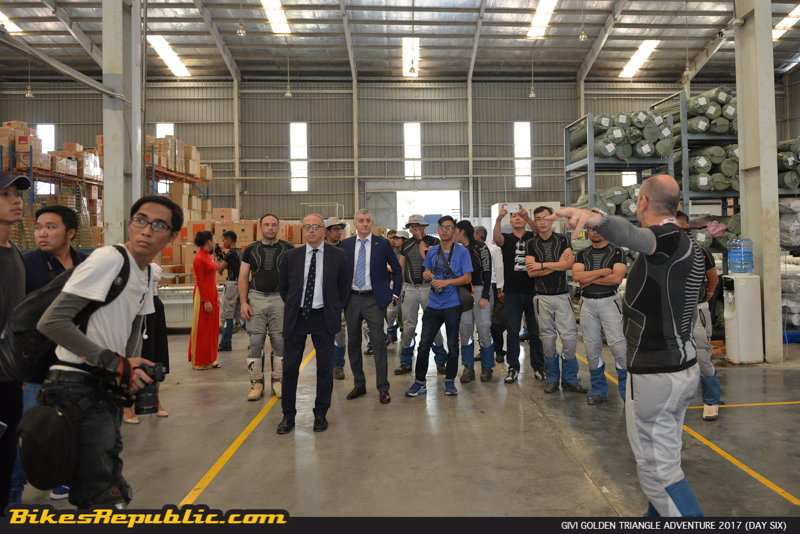 This was the birthplace of GIVI rainsuits and soft luggage. 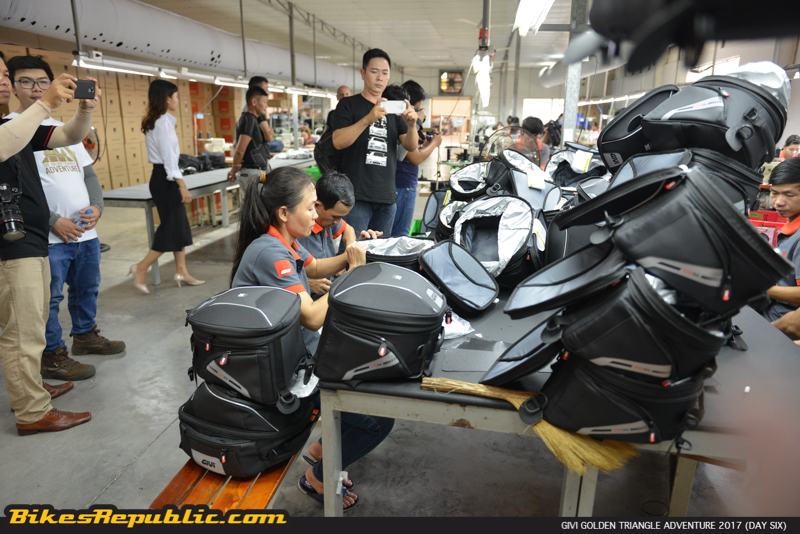 We saw how different materials came together, being cut to exact dimensions by using a hydraulic press or laser cutter, the stitched together by highly trained professionals, before being QC’ed and packed. 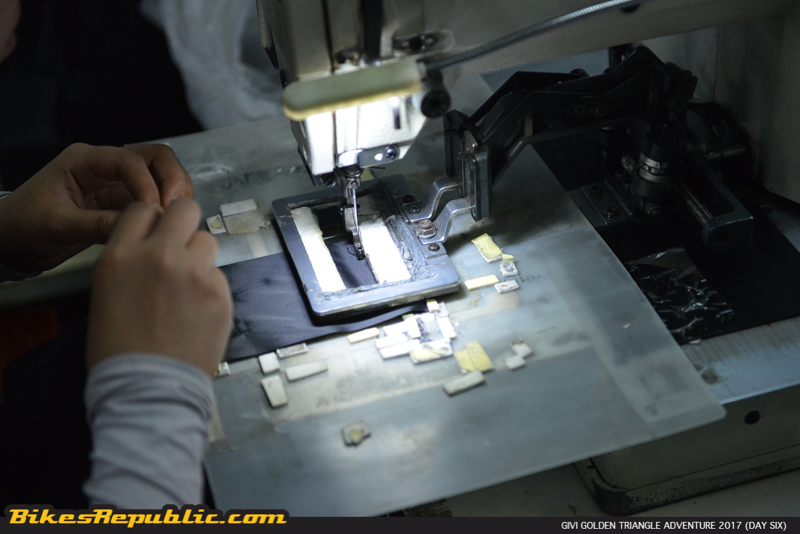 We saw the very same tankbags, soft luggage and waterproof we were wearing being assembled right there. 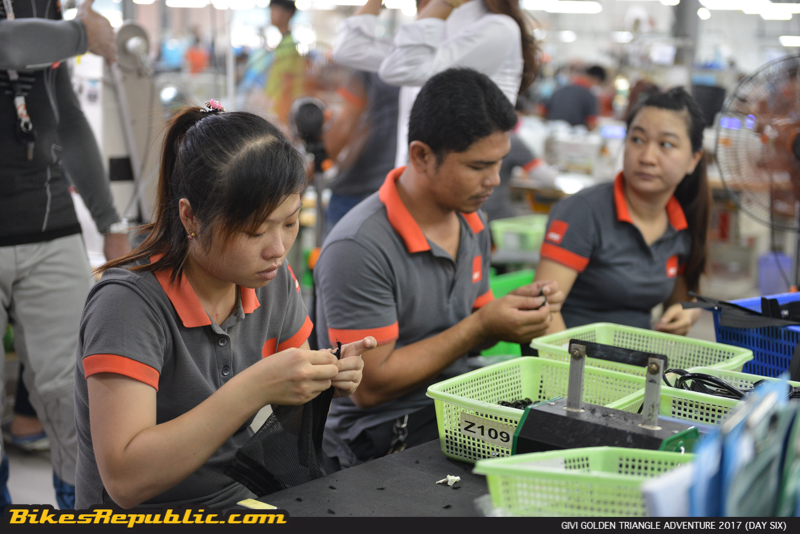 In the meantime, the GIVI crew had taken our helmets to a room in the administration building, where two ladies pinstriped on our names and national flags on one side of the chinbar. 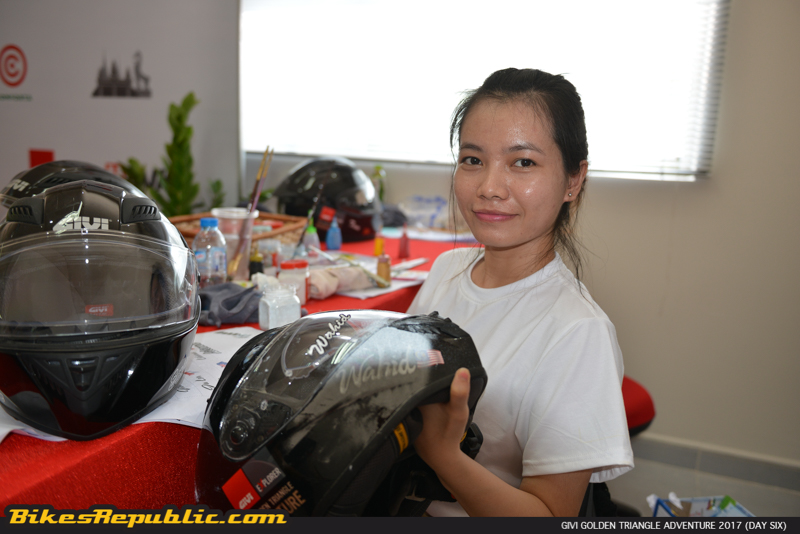 The GIVI Explorers and other guests were then ushered into the conference room for lunch and the GIVI charity event called, “Riding for Reading.” This GIVI CSR initiative aims to assist Vietnamese children in primary schools by meeting short-term and long-term needs. For the near-term, GIVI donated writing and drawing utensils; and health insurance and scholarships in the long-term. 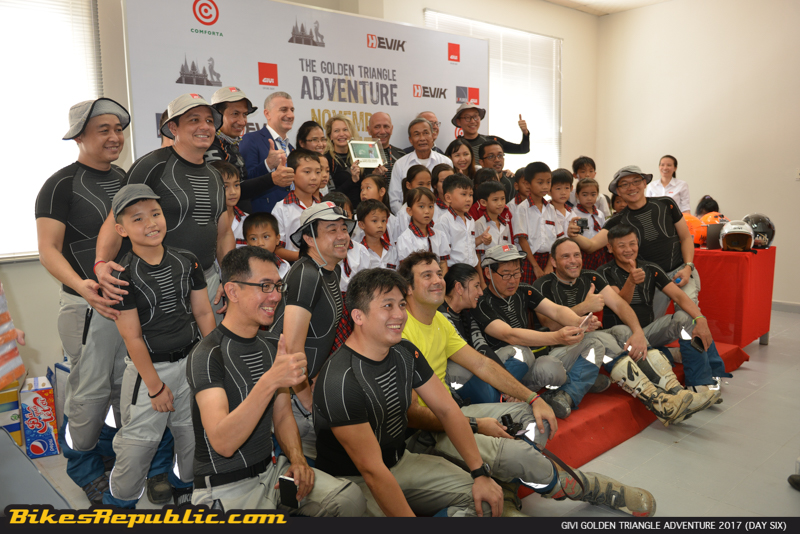 A spontaneous fundraiser was set up among the GIVI Golden Triangle Adventure 2017 participants, to which everyone was more than happy to contribute. A total of USD 800 was raised. 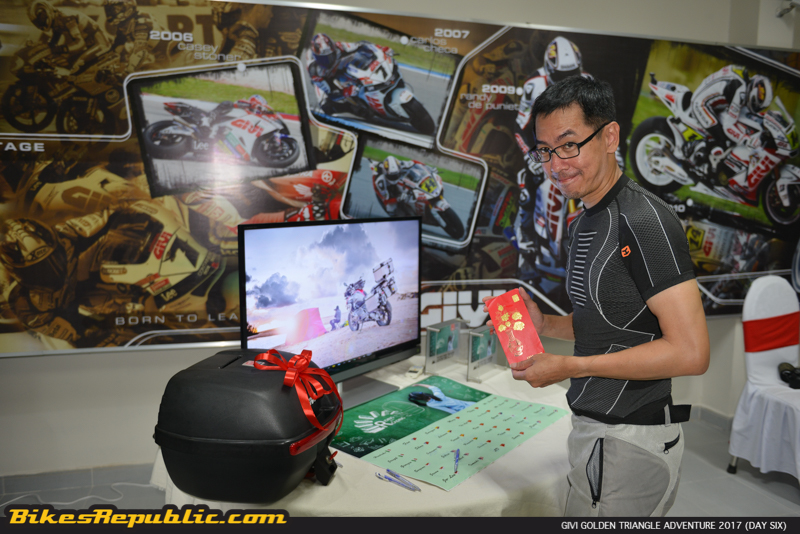 The kids came to meet us soon after, and it was a happy and emotional experience for all involved, as Ms. Visenzi and Mr. Perucca handed the items to them. 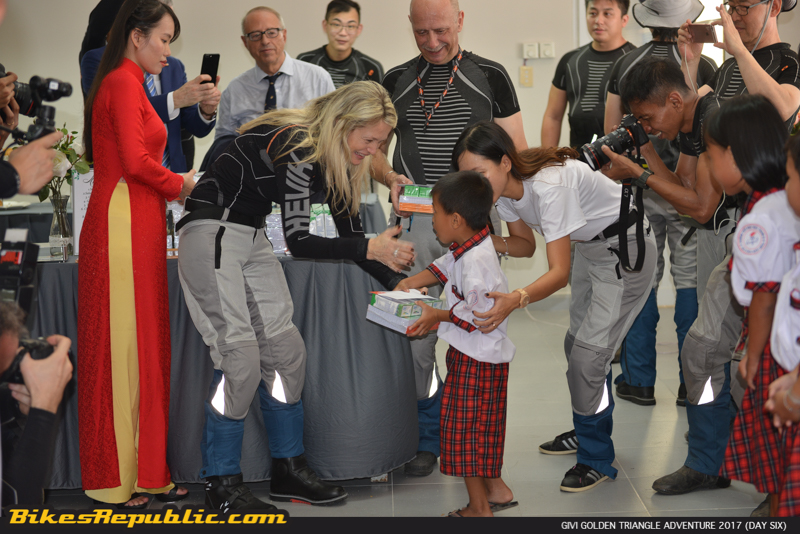 As Mr. Perucca said in his speech, the GIVI Explorer adventures have always been about learning and giving, rather than being just riding across the world. 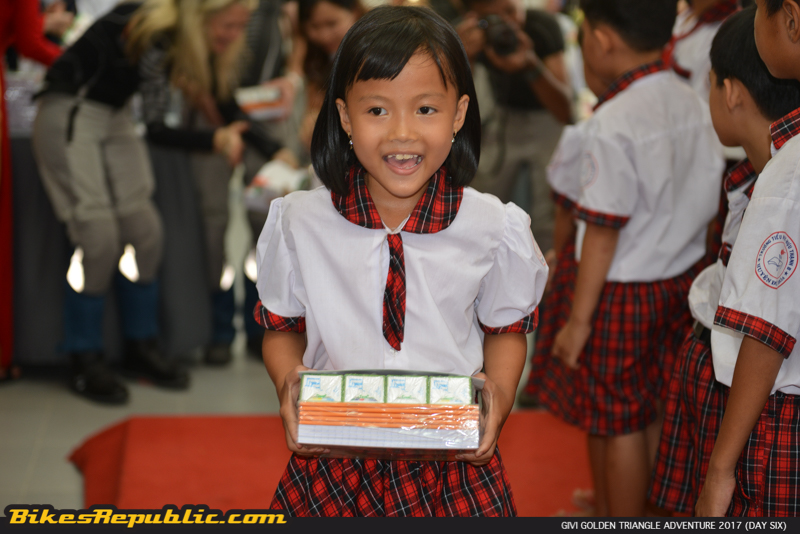 With the Riding for Reading program done, GIVI presented gifts to the Explorers. First was renowned Vietnamese coffee, packed together with a set of serving cups, and the traditional Vietnamese conical hat called nón lá (translated as left hat). 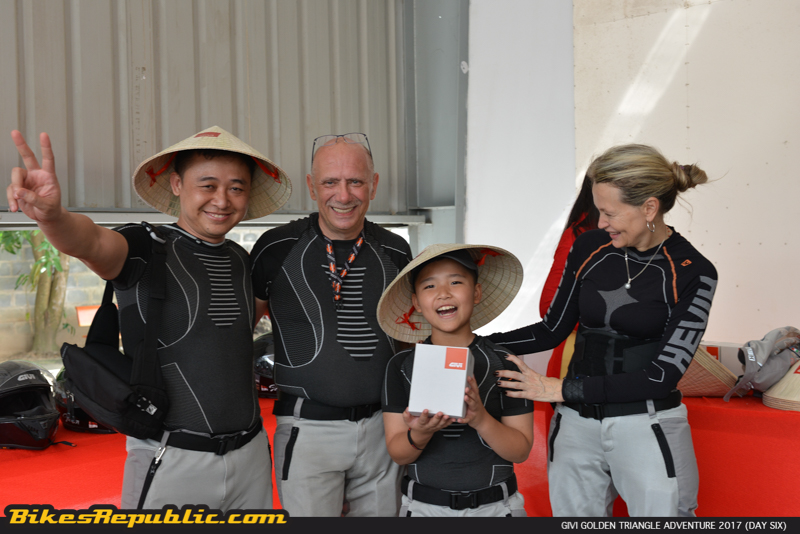 It was time to say goodbye to GIVI Vietnam and head to our stop for the day. A few of the Vietnamese crew also joined us on the ride.

We cut a south-southwesterly course toward Cần Thơ (pronounced “Kan Ter”), the main city in the Mekong Delta, where the Mekong River empties into the South China Sea. The river life figures heavily here, including a floating market.

Unfortunately, one of the bikes developed a puncture and we arrived way after dark so there was no chance of us going anywhere.

Click here for Day Five (Part One) of the GIVI Golden Triangle Adventure 2017.

Click here for Day One of the GIVI Golden Triangle Adventure 2017.