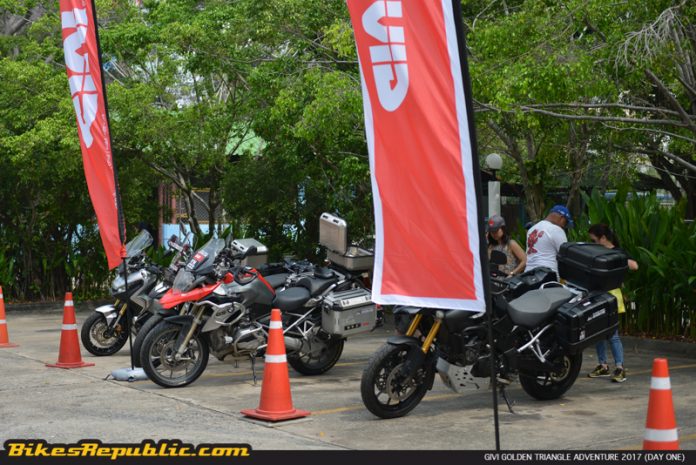 Today is the start of an epic journey through Indochina.

The ride starts at Pattaya, Thailand through Cambodia and Vietnam.

Day saw the distribution of riding gear and motorcycle allocation. 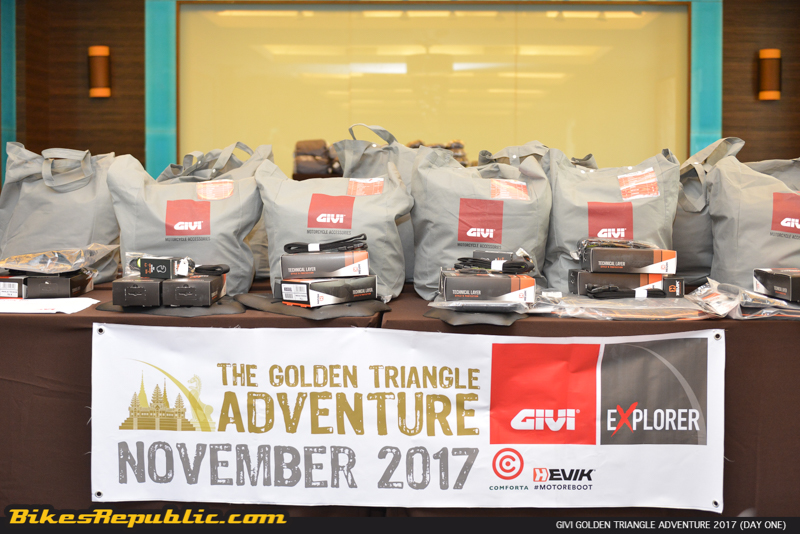 Day One was reserved as the day of arrival of the participants, consisting mainly of GIVI dealers from across the globe. There is a record number of entries this year, an increase from the previous years’. 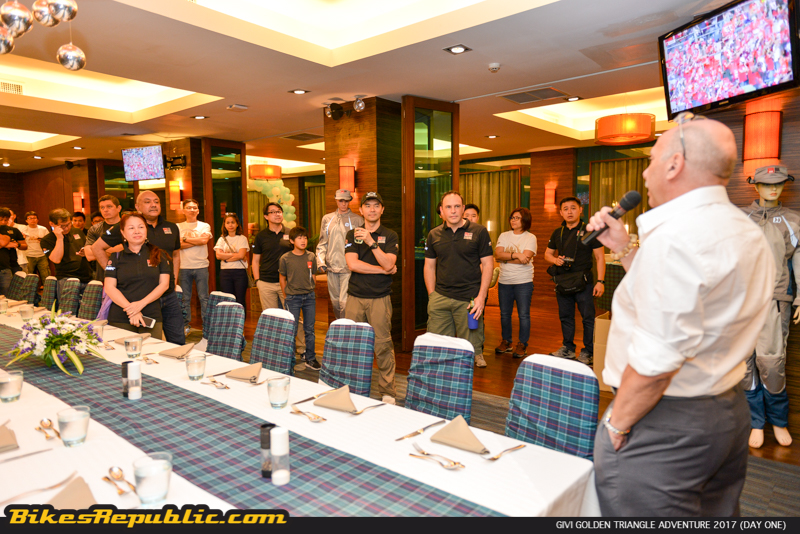 The GIVI Golden Triangle Adventure 2017 is carried out under the GIVI Explorer banner and as the name implies, GIVI Explorer means riding through new and exotic locations around the world, discovering the land’s diverse beauties and cultures along the way. 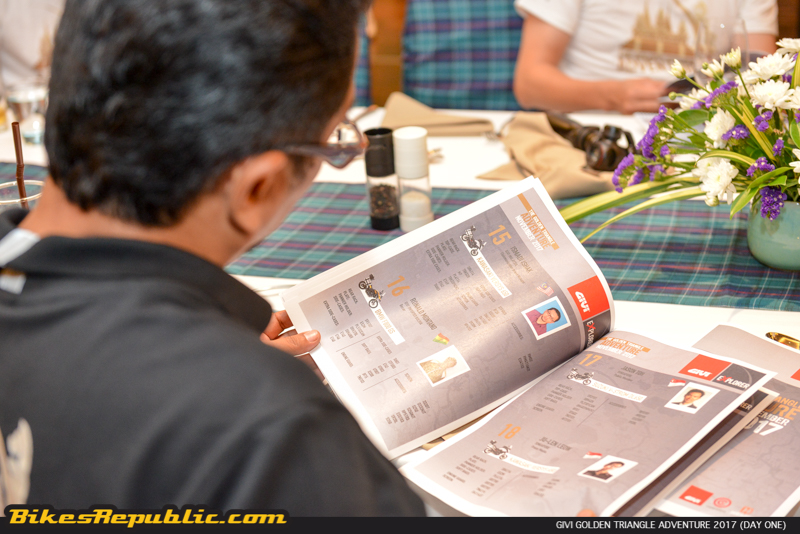 It is also a platform for GIVI dealers to experience the usefulness and reliability of GIVI’s product line firsthand in the real world. Being designed to be great is one thing, but to actually use them under rain or shine, in various tough conditions is the most meaningful experience (more on this later). 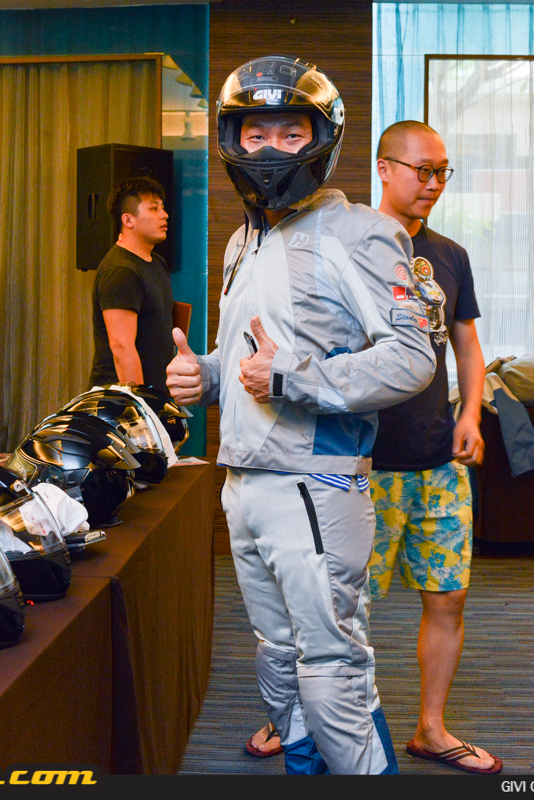 Most participants flew into either airport in Bangkok and were then transferred to The Bayview Hotel in Pattaya City.

In the meantime, the GIVI crew were overworked at X-Speed, one of the largest motorcycle accessories and workshop Pattaya, in getting the motorcycles ready. Working hand-in-hand with them were the boys and gals at the shop. 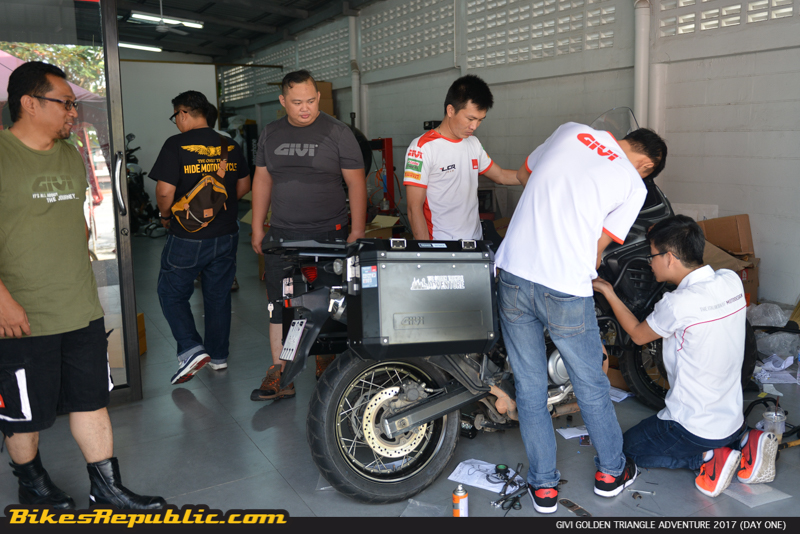 They had to install different types of side cases, top cases, crash bars, spotlights, windscreens, tankbags, handguards, phone and GPS mounts, any many more within three days on the 21 participants’ bikes, plus another 3 of the marshals’. 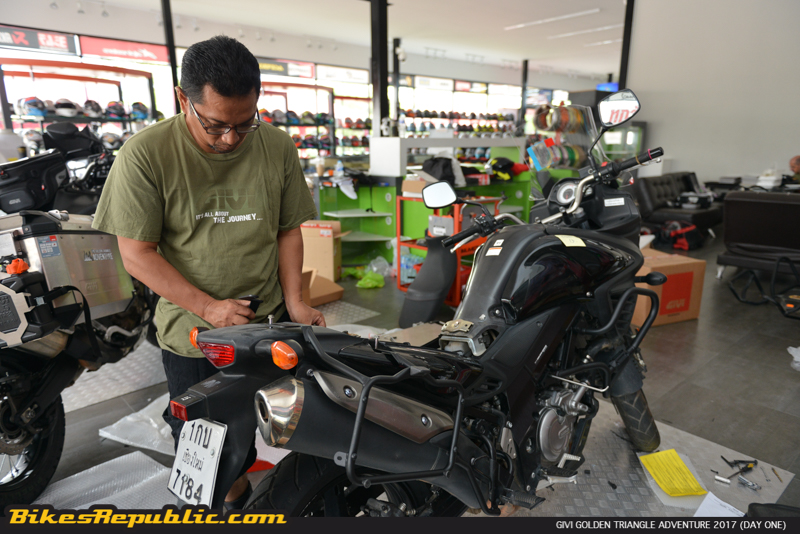 GIVI’s Ismadi Ishak and I had ridden out of GIVI’s HQ in Bukit Beruntung on the morning of the 9th first to Songkhla, then to Chumporn and finally arriving in Pattaya on the 11th. 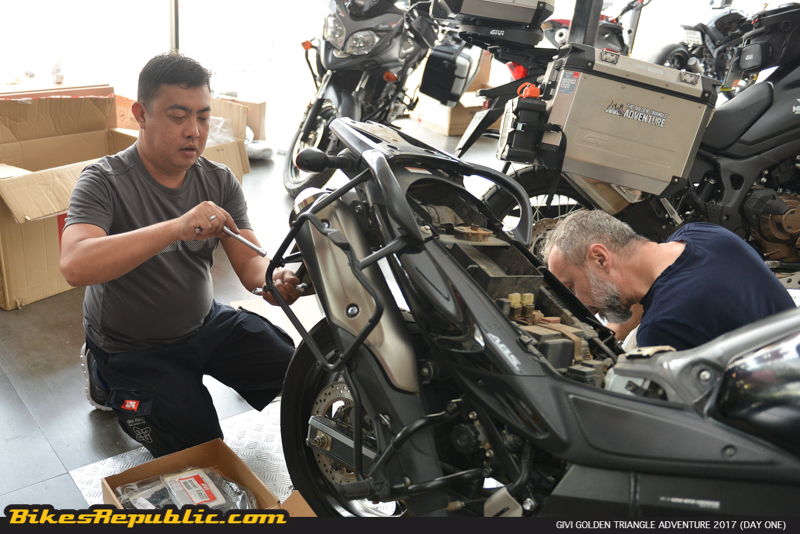 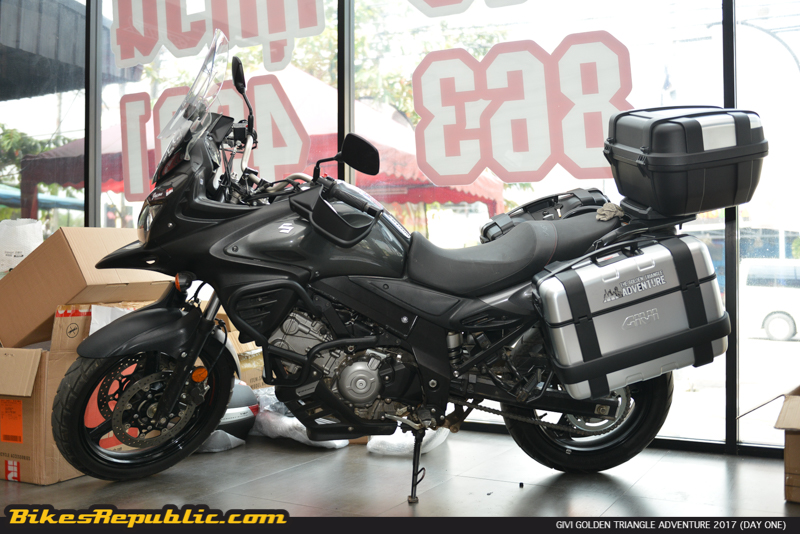 Participants had started arriving at The Bayview Hotel from morning, hence the customary riding gear and accessories distribution session began at 2pm. 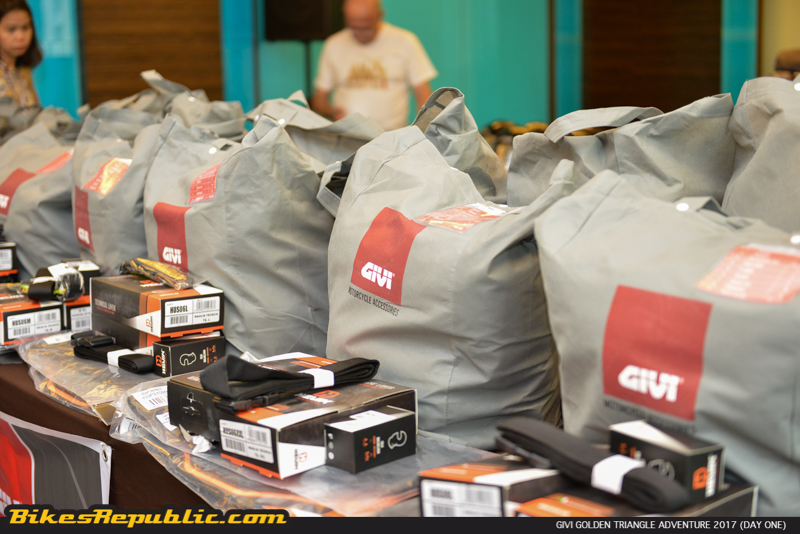 There appeared to be no unhappy participant during this session, evident from their broad smiles. Well, no surprise here, since we received a Santa Claus-sized bag full of gear! It was like the New Year, Chinese New Year, Hari Raya, Vesak Day, Deepavali, Christmas all rolled into one. We were provided with the latest: 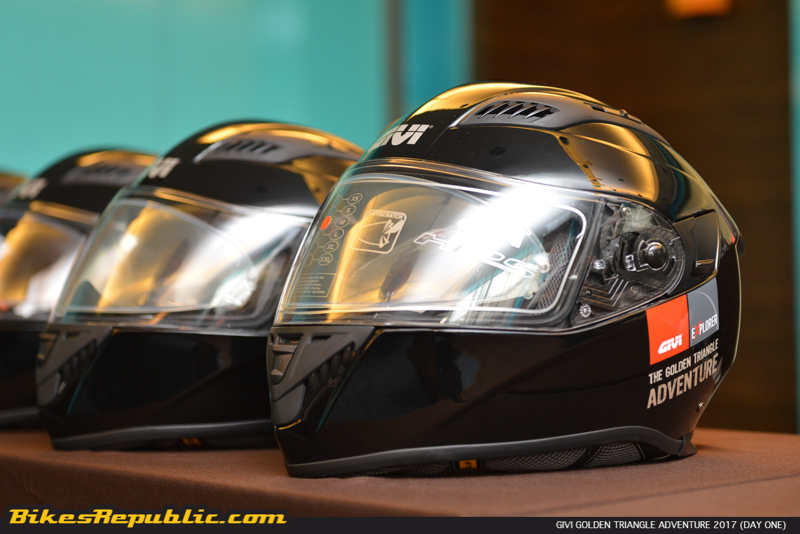 Why two sets of rainsuits? Remember we mentioned about using the products in the real world? The Prime rainsuit is an experimental model, so who better to act as testers than us GIVI Explorers, embarking on the GIVI Golden Triangle Adventure 2017? 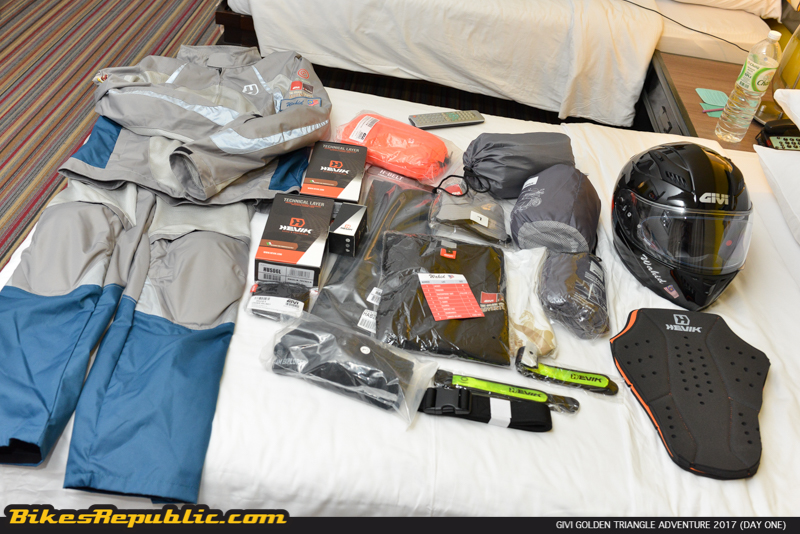 That’s not all, as was with the ride in South Africa two years ago, a questionnaire on the motorcycle equipment and riding gear MUST be completed and handed back to GIVI as the basis for further research and development.

With the handover done, we prepared for the Welcome Dinner. Everyone was elated to meet their friends from the previous GIVI Explorer adventure rides, greeting each other with loudly and hugs. I can’t lie – I was very happy to see the familiar faces again. 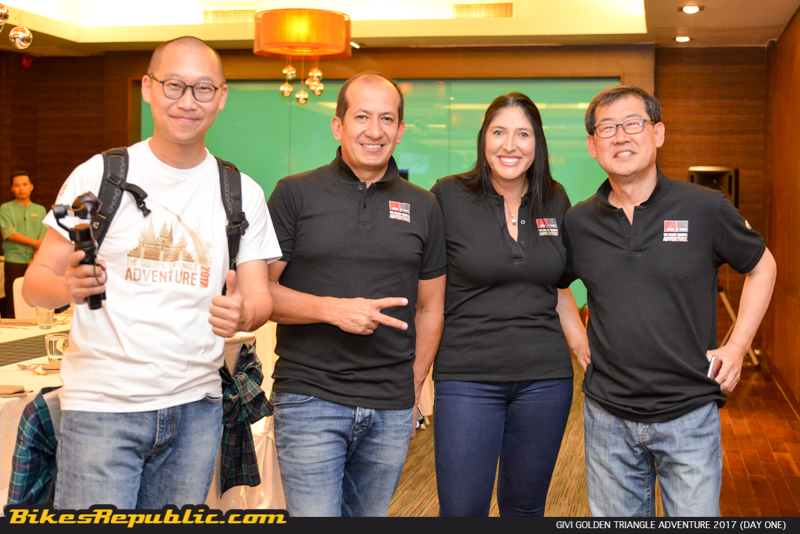 The food was awesome, as always on GIVI’s adventure rides, but we also had our eyes on the final 2017 MotoGP round in Valencia, Spain.

We cheered on the Ducati Team and of course Andrea Dovizioso on his bid to claim his first world title, besides Cal Crutchlow. We were heartbroken when both Ducatis crashed out. (Ducati is also sponsored by GIVI.) 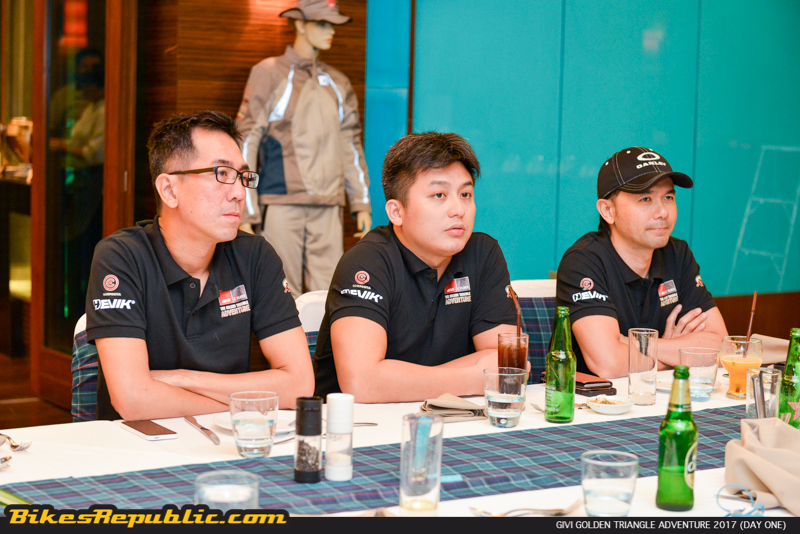 So, we came back to the matters pertaining to the GIVI Golden Triangle Adventure 2017, which was the welcoming speech, programme and safety briefing. 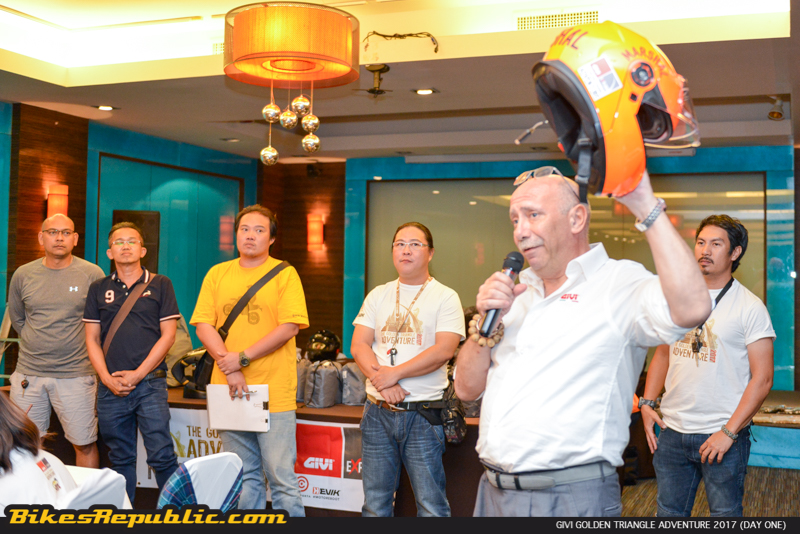 Tomorrow (13th November) we’ll be riding to Aranyapathet, Thailand which is one of the border towns with Cambodia, before crossing into the latter country and onwards to Siem Reap. 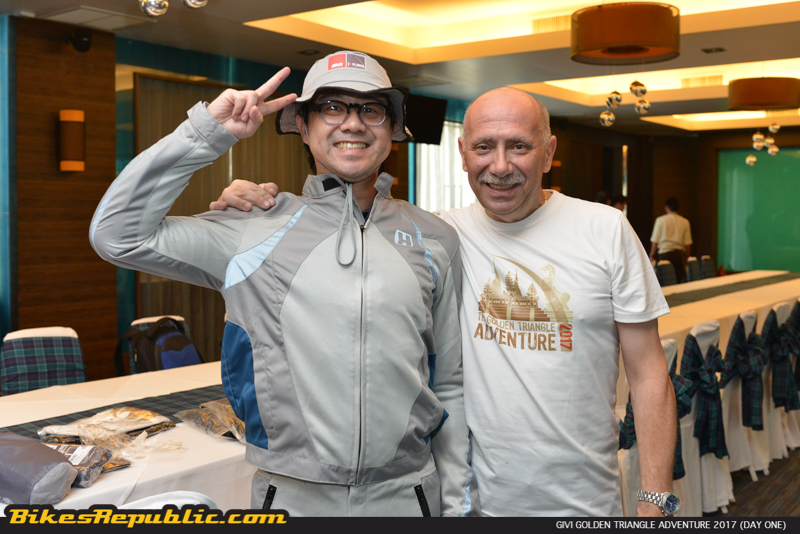 We were told to be extra vigilant when travelling through Cambodia as the traffic in Cambodia could be chaotic, but everyone was just excited to be riding under the GIVI Explorer banner again.