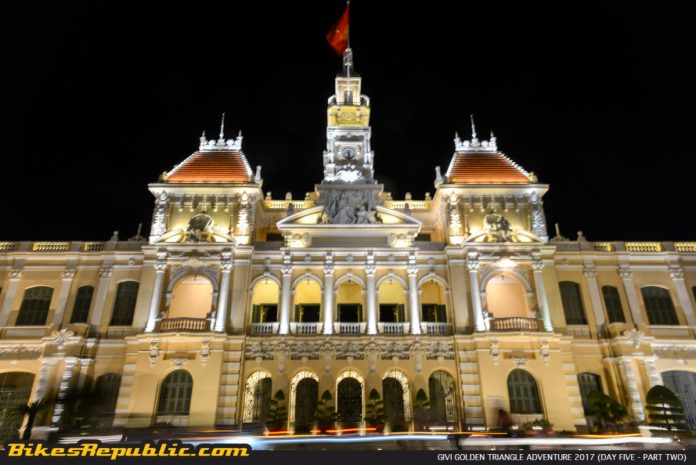 GIVI did so to mercifully spare us the hassle of having to suit up again, and ride through that traffic.

Throwback to the GIVI Golden Triangle Adventure 2017 in downtown Hi Chi Minh City. Bikes were everywhere. There are 7 to 7.5 million bikes to a population of 10 million. Ho Chi Minh City is *not* the capital of Vietnam, as mistakenly narrated, instead was the capital of South Vietnam, called Saigon. #TheGoldenTriangleAdventure #GIVIExplorer #Iamexplorer

A VIP had joined us by now. She was Ms. Hendrika Visenzi, daughter of GIVI’s founder, Mr. Giuseppe Visenzi (the first two letters of his name became GIVI). The Hevik sub-brand was under Ms. Visenzi’s charge (HEnrika, GIvi, Kappa). She rode with us from this point on.

The local guide on the bus announced that the restaurant wasn’t far away and we had time to shop at the Takashimaya Mall nearby, before getting back together for dinner. That sounds great, maybe I could get something for family and friends back home. 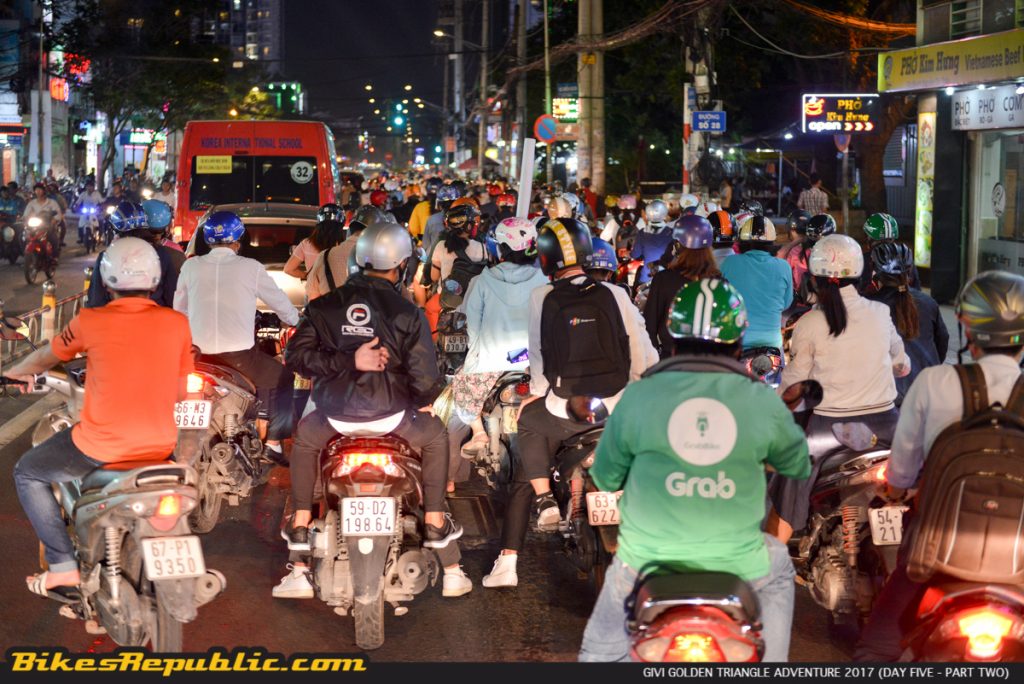 As usual, it was already dark by 7pm and the roads seemed to be fully illuminated by the headlamps of the scooters and mopeds. There are 7.5 million motorcycles to HCMC’s population of 10 million. 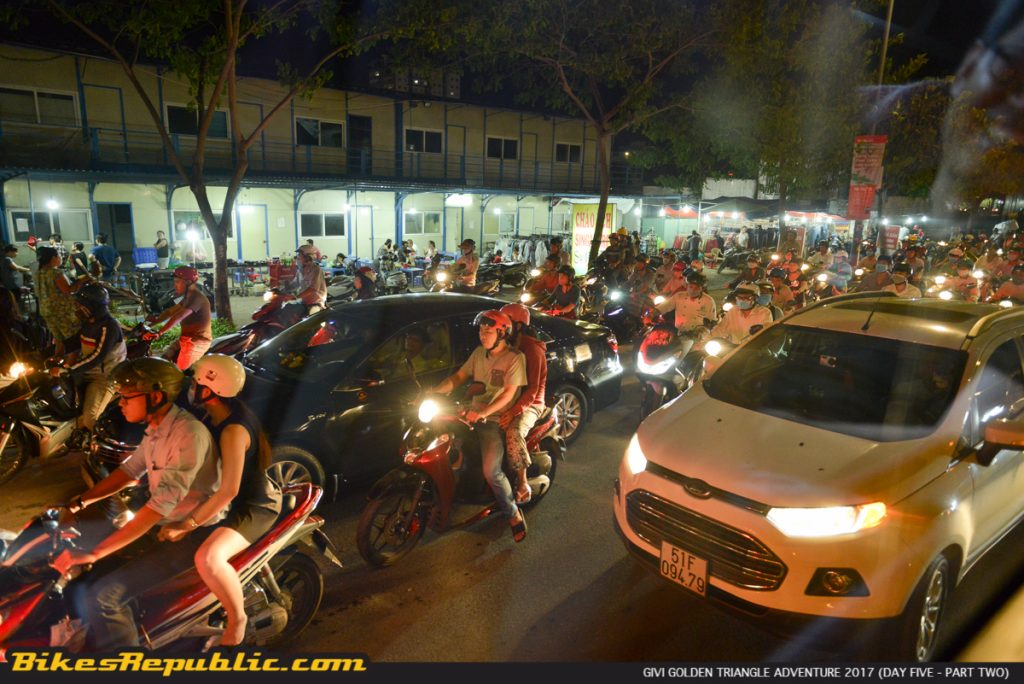 It was explained that HCMC has a chronic parking problem, therefore the motorcycle was the perfect tool. The rich would have their drivers drop them off at their destinations and the driver would continue to drive around in circles until their bosses are done with their business. Hence if the city was a body, motorcycles are the blood cells. There were many Grab Bikes too! 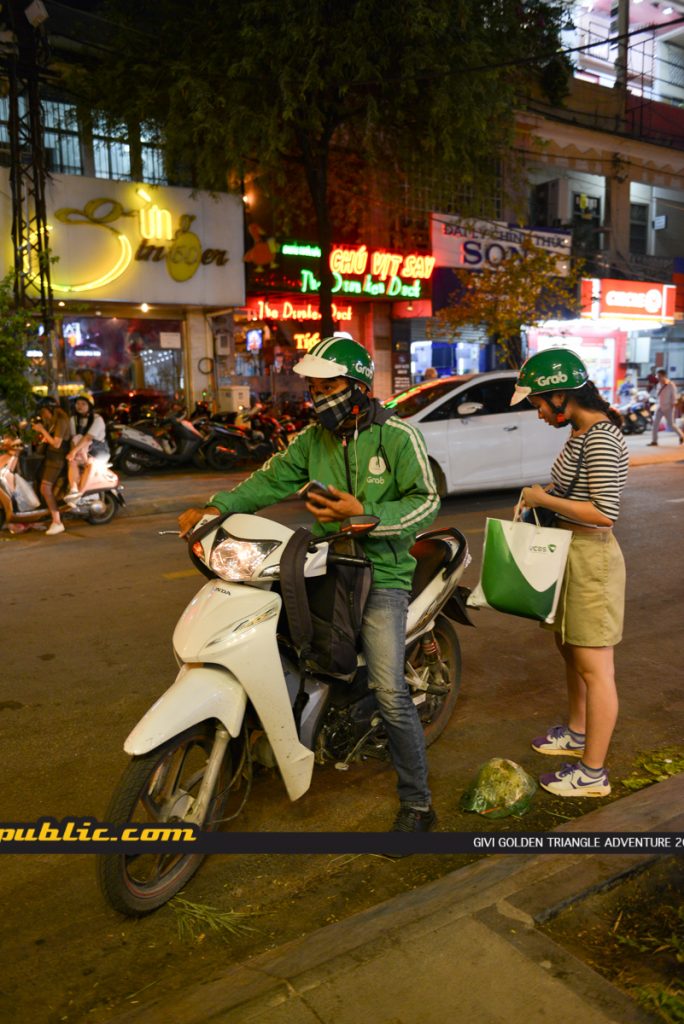 It was also pointed out to us on how the bikes were parked – squished together as if they were bicycles. The owners of these motorcycles will park them inside their living rooms when they get home. 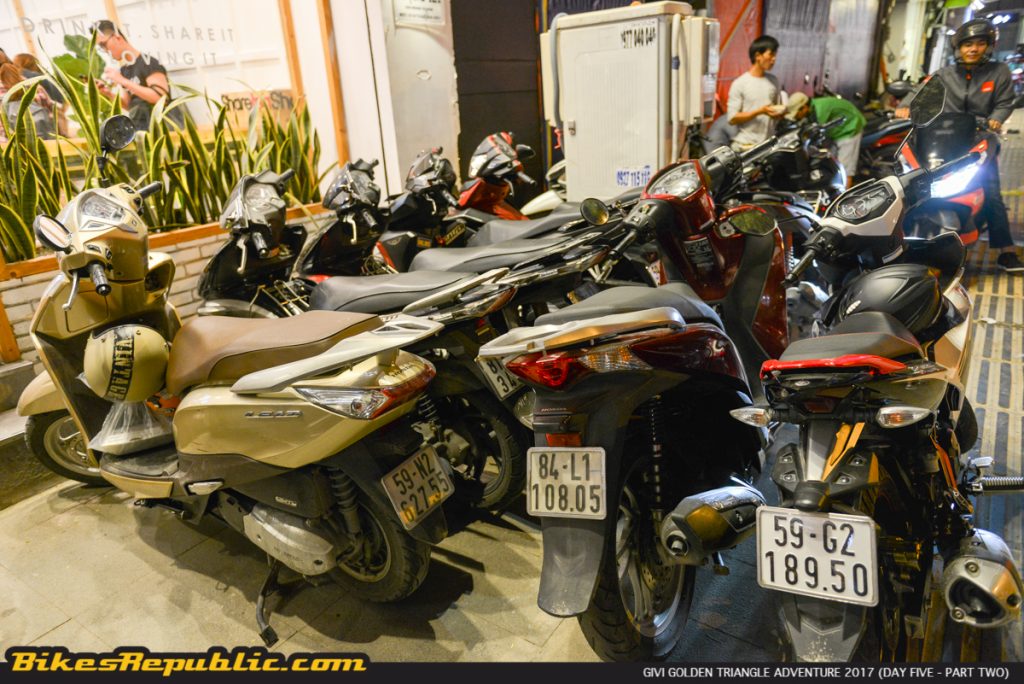 Shops lined the road, selling everything from foodstuff to house stuff. 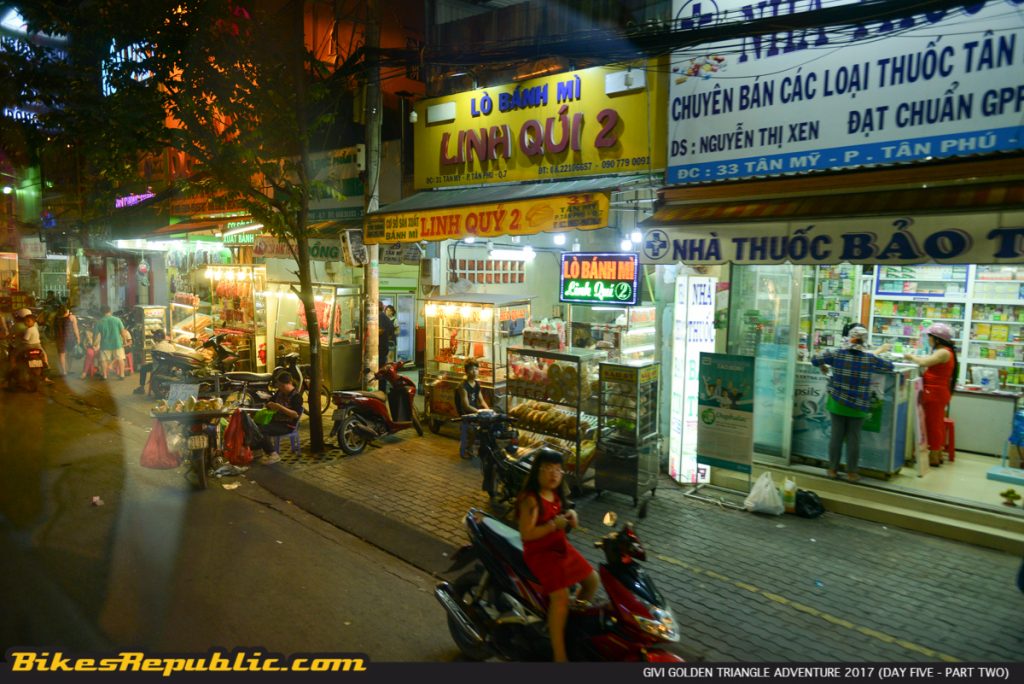 In the meantime, mopeds kept zipping by. One fast guy swerved through everyone else and was closed to being squeezed like a bug between our bus and a car. Ronald, Enrique and myself were seated at the front and we started yelling. Man, that puckered us up real good. 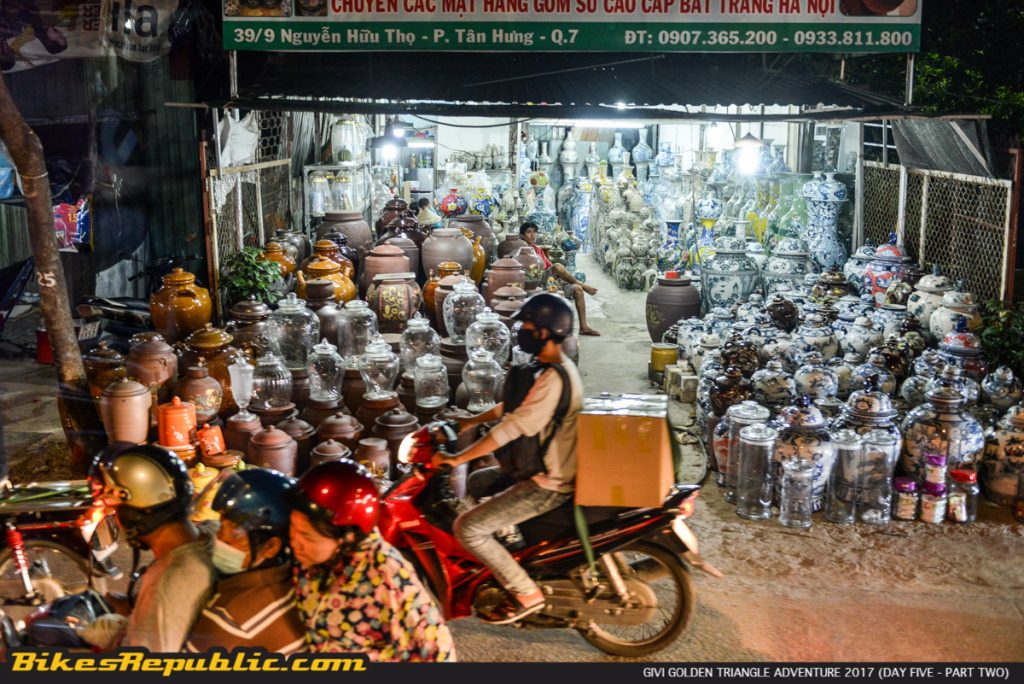 Other impatient riders would hop onto the sidewalks, sometimes against the traffic.

Our guide was right, our makan place wasn’t far from the hotel, but even he miscalculated the amount of time we needed to get there.

I took us more than an hour to get to the restaurant and it was already too late to visit the mall, so we decided to foot it to dinner. Here’s another adventure: Crossing the never-ending stream called “the road.” 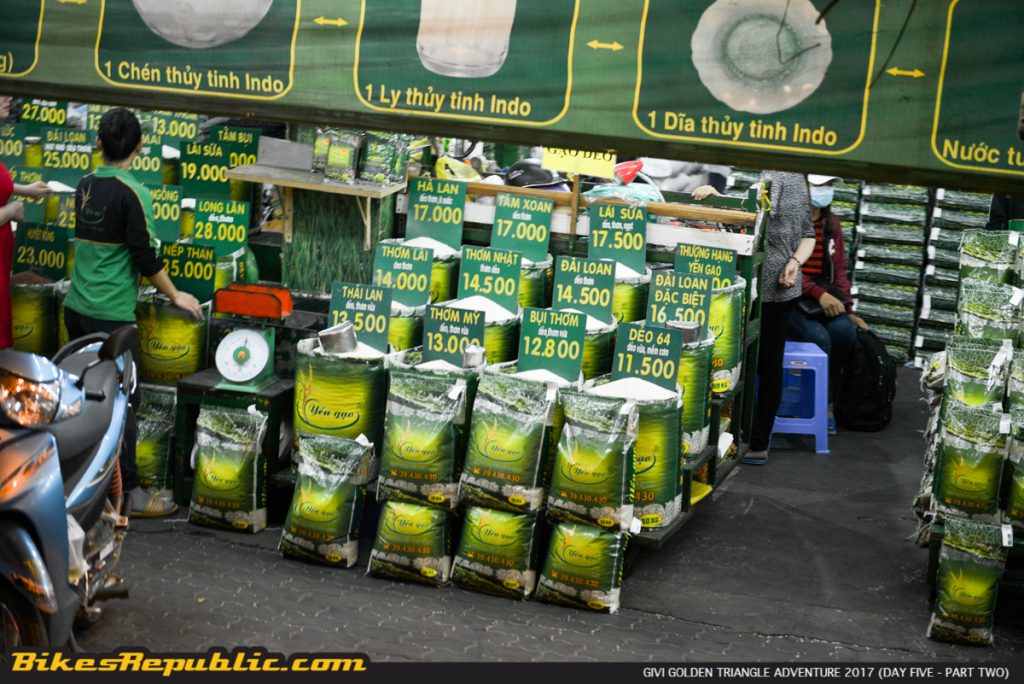 The trick was to see an opening, then step confidently onto the street and keep walking in a steady and predictable manner. That allowed the local riders to guesstimate where you’re headed so they could go around you. Ismadi and I said a prayer, and I almost had my eyes closed when we crossed en masse.

We also noticed that all bikes were fully stock and most glaring of all, no bike had any luggage tacked to it (due to lack of parking space). Well, except for one scooter which carried a B32 top case! That was enough to send us all into a celebratory mood! 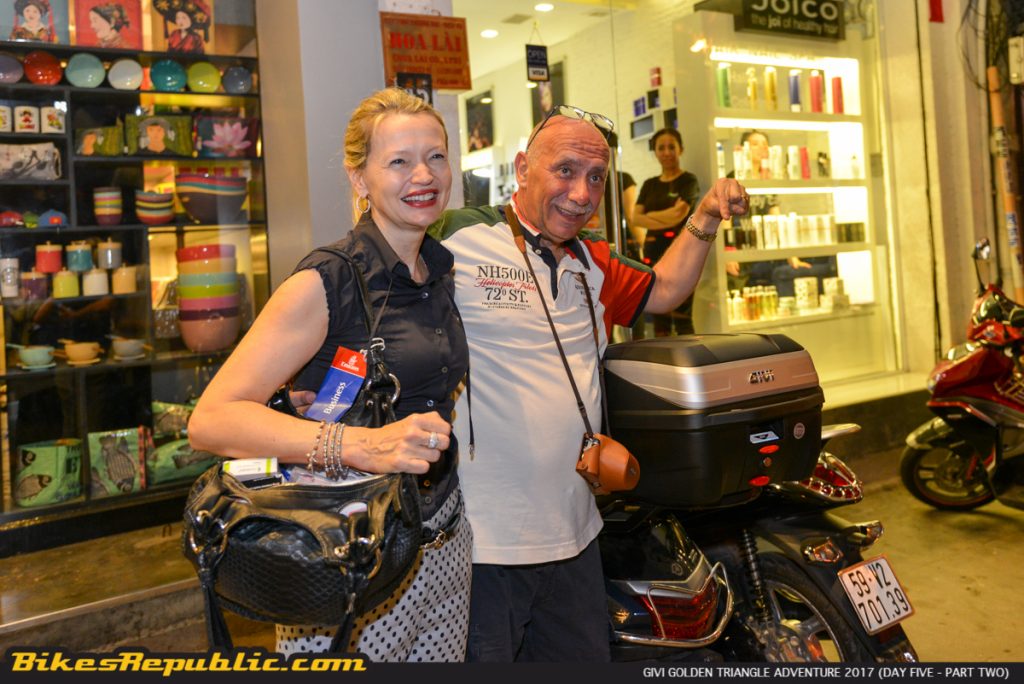 Dinner was at the 3T Vietnamese BBQ Restaurant on the rooftop of the Temple Club Restaurant. Superb food! I’m allergic to seafood so I hammered on the Vietnamese spring rolls and chicken all night. 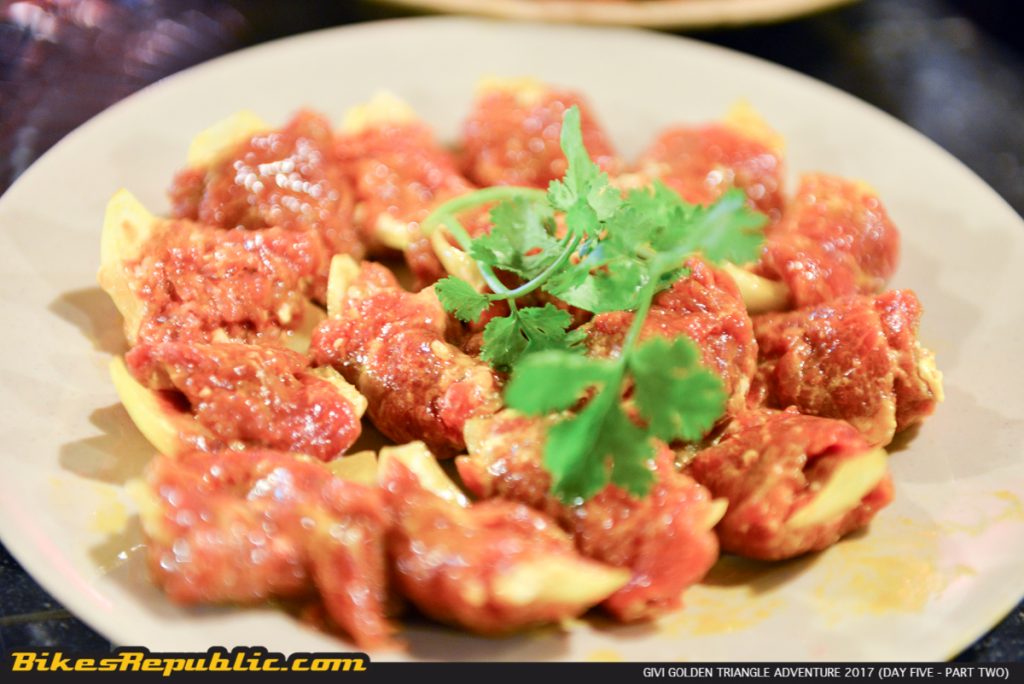 A group from GIVI Vietnam had also joined us. Joseph explained that it was through these hardworking individuals that we were enjoying the exclusive line of riding gear during the GIVI Golden Triangle Adventure 2017. 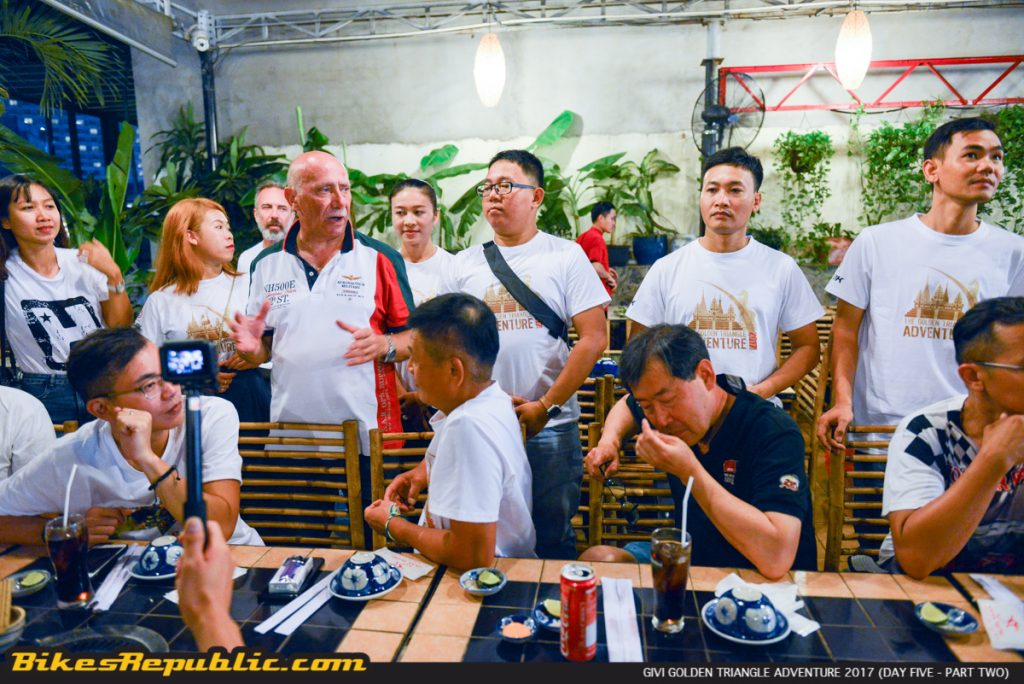 Here’s a personal note to them (hope you guys are reading this): The gear were truly amazing. Both the new jacket and pants kept me cool when it was really hot. They fitted my body well and allowed lots of freedom of movement without flapping in the wind. Also, all the accessories worked. My favourites were the X-45 Fibre helmet, Hevik Lumbar Support belt, and the Technical T-shirt. Well done! 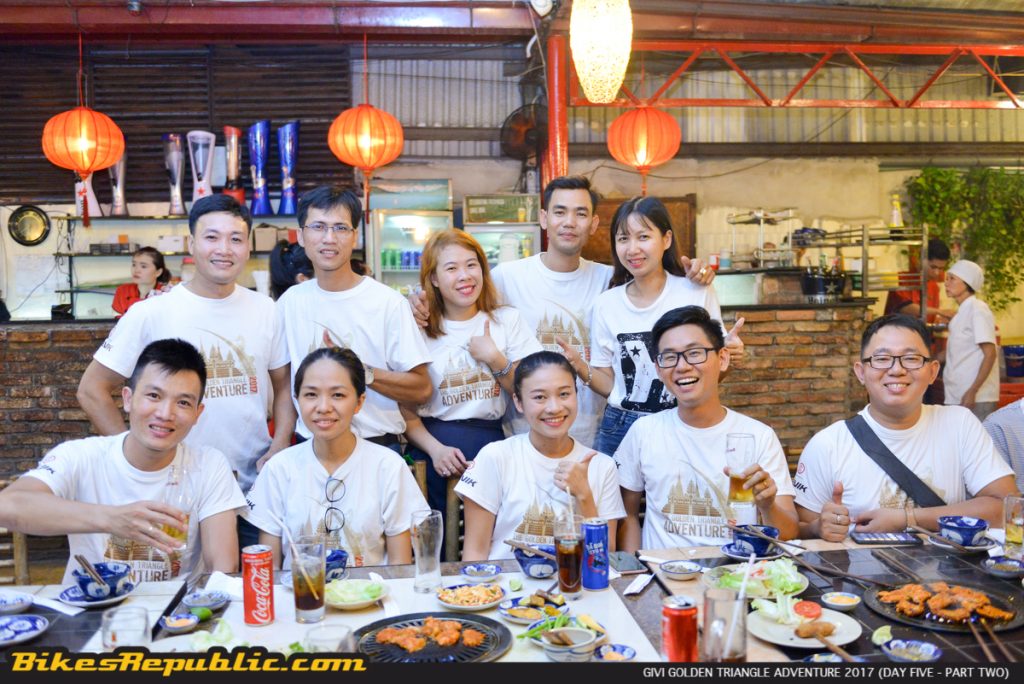 Now, where were we? Oh yes, dinner.

We went out on foot again after the thoroughly satisfying dinner and chartered every trishaw we saw at a square. Sure, we were swamped by traffic again at first, but we didn’t care by now as every GIVI Explorer was laughing and giggling like children. A few Explorers took to riding the trishaws instead of being ferried. GIVI Golden Triangle Adventure 2017 happened on three wheels, too! Hah! 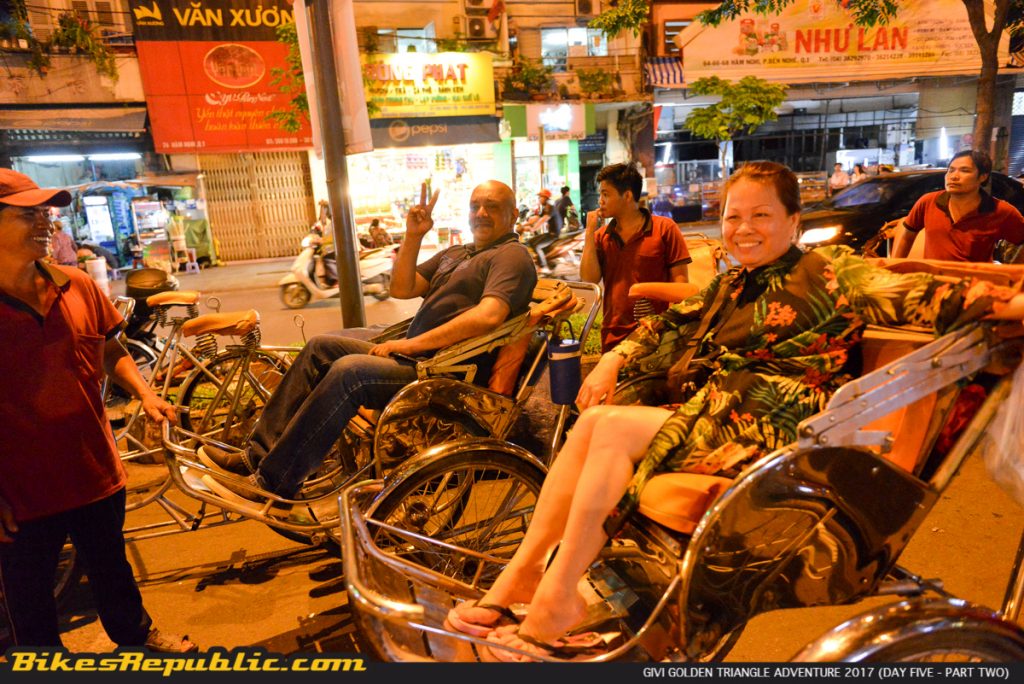 It was only now that I discovered just how beautiful HCMC was! I was shooting pictures of the guys around when I spotted, first an M48 Patton tank with Vietnamese Army insignia, followed by the tail section of a Northrop F-5E Tiger II fighter jet and Bell UH-1 helicopter in a compound! Being a military history buff, I asked the trishaw uncle, “Is that the museum?” He just smiled and shrugged. Then I heard, “Yes, that’s the War Museum” from behind somewhere. I looked around to see a young couple wearing surgical masks on a scooter to the left. “But it’s closed now,” said the rider in perfect English. I thanked him and they nodded. Whoa! I have to come back here! 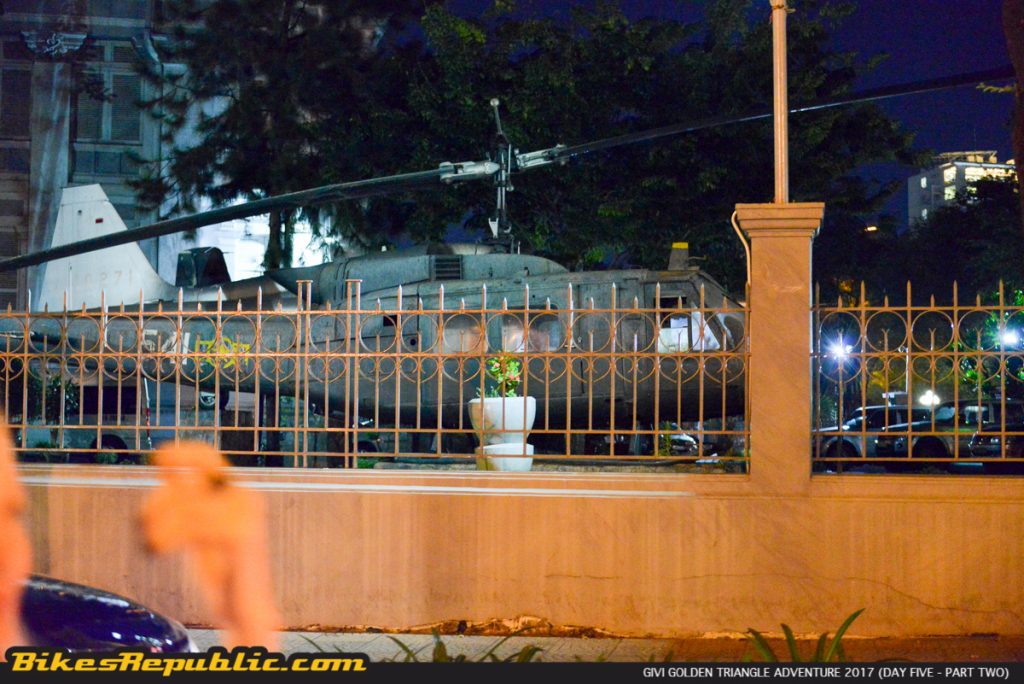 It was during this time that it occurred to me how HCMC has thrived. HCMC, known as Saigon at the time was the capital of South Vietnam, and had been the scene of battles and bombings during the Vietnam war. Being the first “televised war,” there were many enduring images from Saigon, but perhaps the most famous was of choppers airlifting civilians from the US Embassy (Operation Frequent Wind) on 30th April 1975, which marked the Fall of Saigon and end of the war. 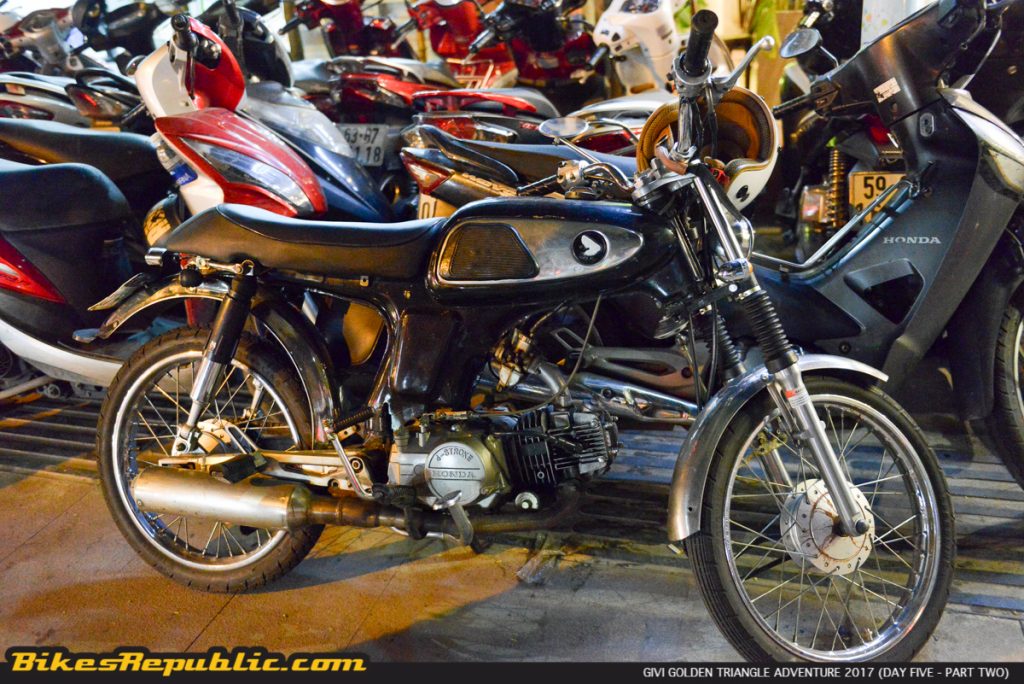 It’s been forty-two years since then and Vietnam, although remaining a communist country, had opened its borders to trade and tourism.

Our convoy of trishaws rounded an intersection and a large classical cathedral like those you’d find in Europe came into view. it turned out to be called Saigon Notre-Dame Basilica, just like the one in France. It was built by the French in 1863 and completed in 1880. 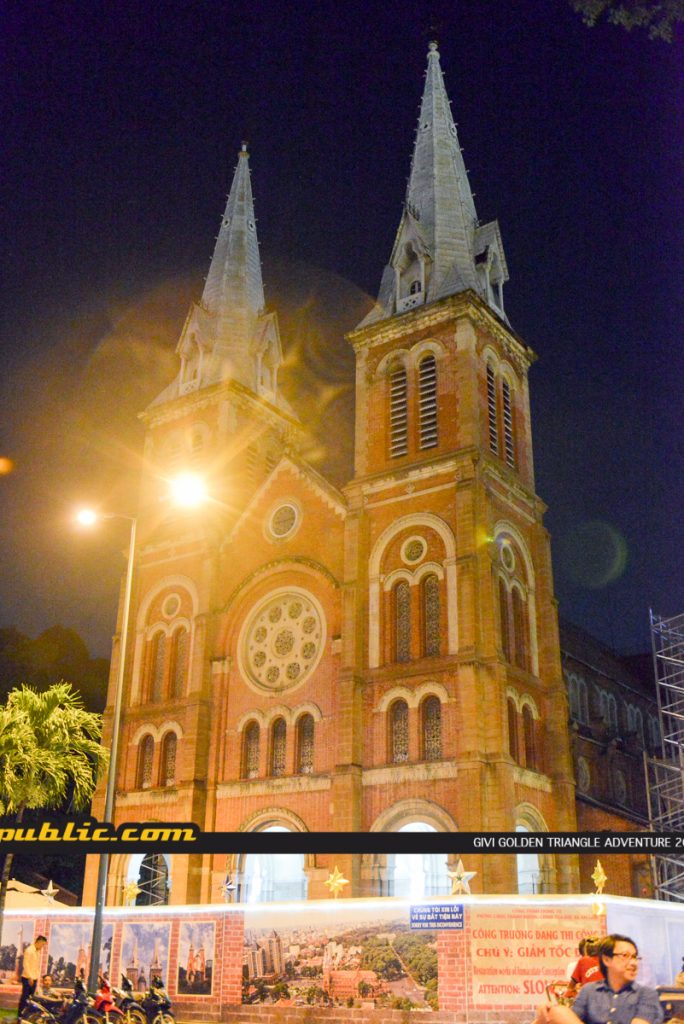 On the other side of the street was a beautiful classical building, the Saigon Central Post Office. Completed in 1891, it was designed by the architect Gustave Eiffel, the French civil engineer who owned the firm which built the Eiffel Tower in Paris. 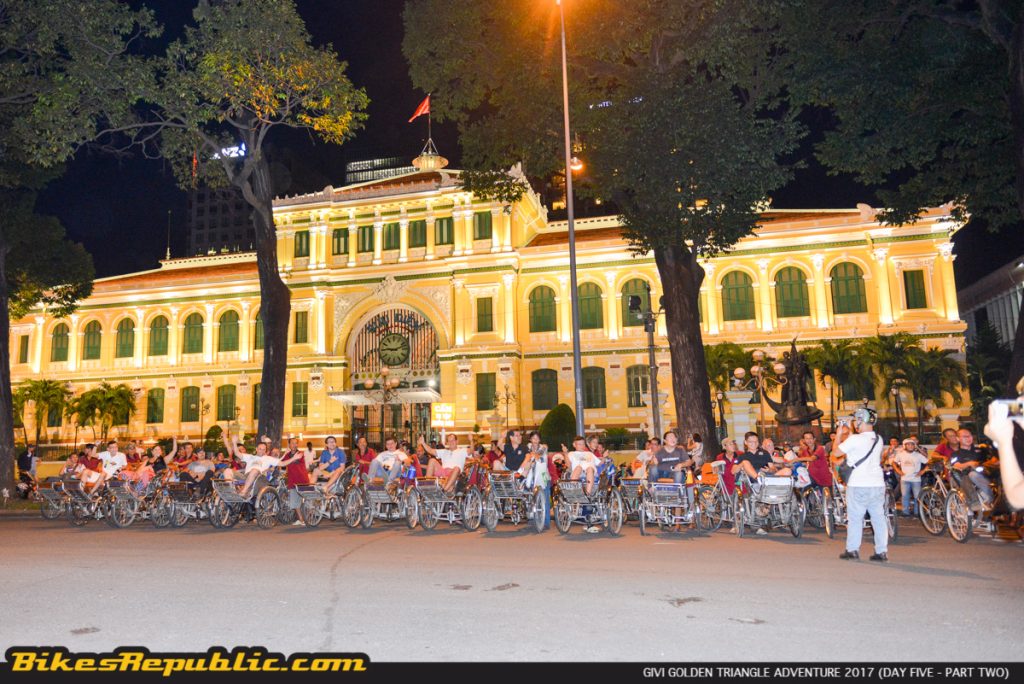 We stopped for a photograph session, then continued onwards past the river front of the Saigon River. Here, we saw European-styled luxury hotels, exactly like those you’d see in movies. And up the road was a large cruise ship at the Saigon River Dock. An ultra-modern skyscraper with an open-air deck shoots into the air on the opposite side. 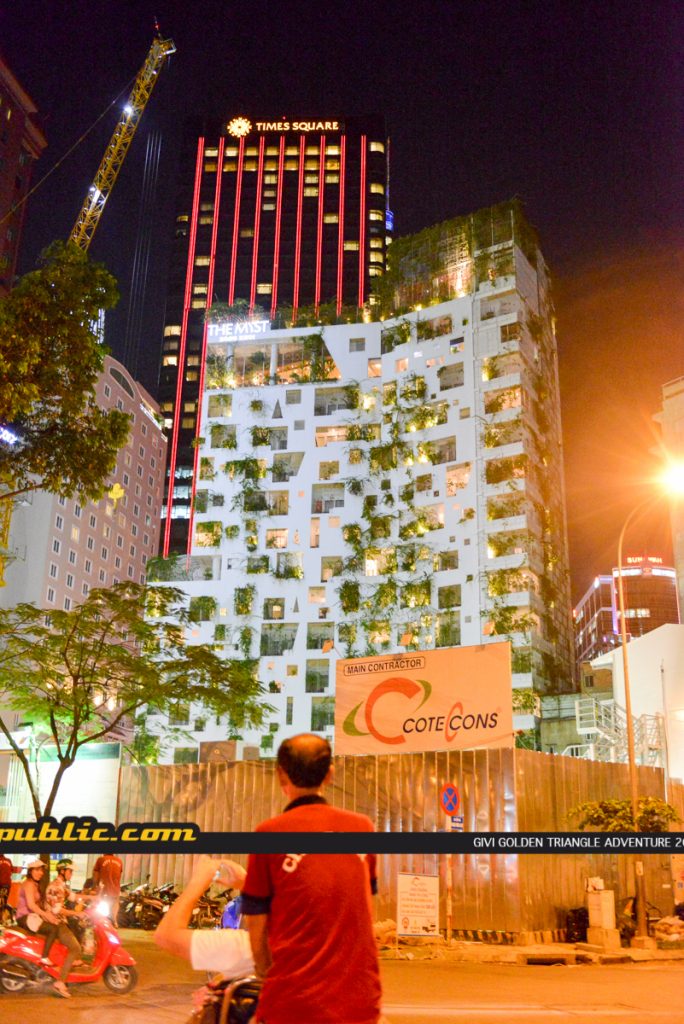 That’s the charm of HCMC. Classical colonial buildings amidst modern buildings and modern lifestyles. We stopped at the Nguyen Hue Walking Street and continued on foot. This stretch encompasses more classical and old buildings converted to shops and hotels. 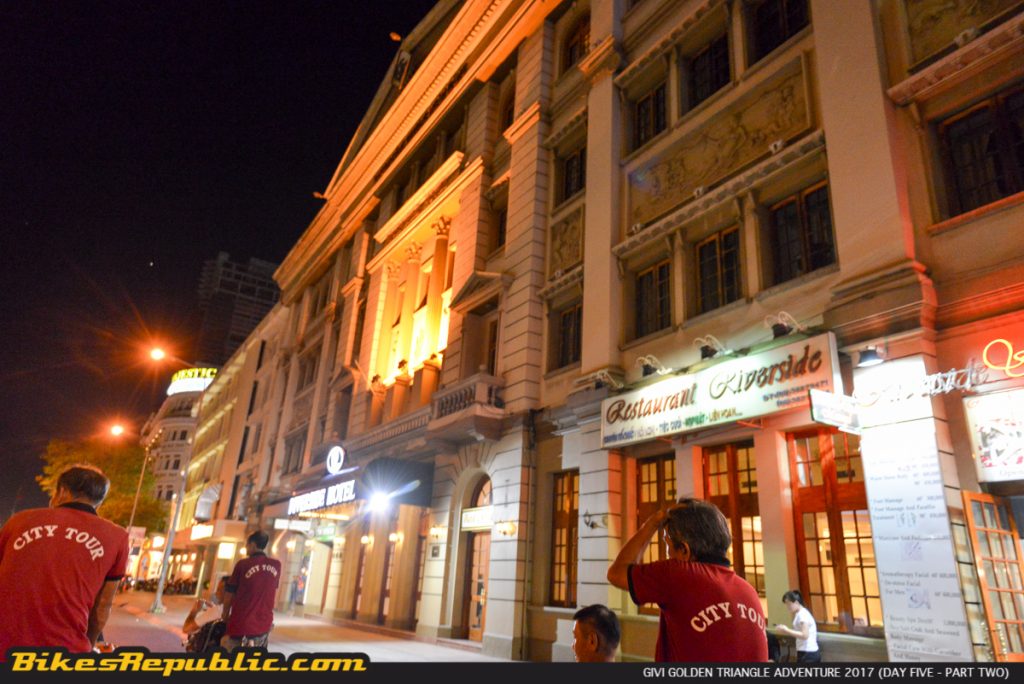 There was a concert here along the median between the lanes. The Explorers stopped for ice-cream at the foyer of The Reverie Saigon, HCMC’s most luxurious hotel. Wisnu and I spotted a brightly lit building about 500m to the north and decided to investigate. 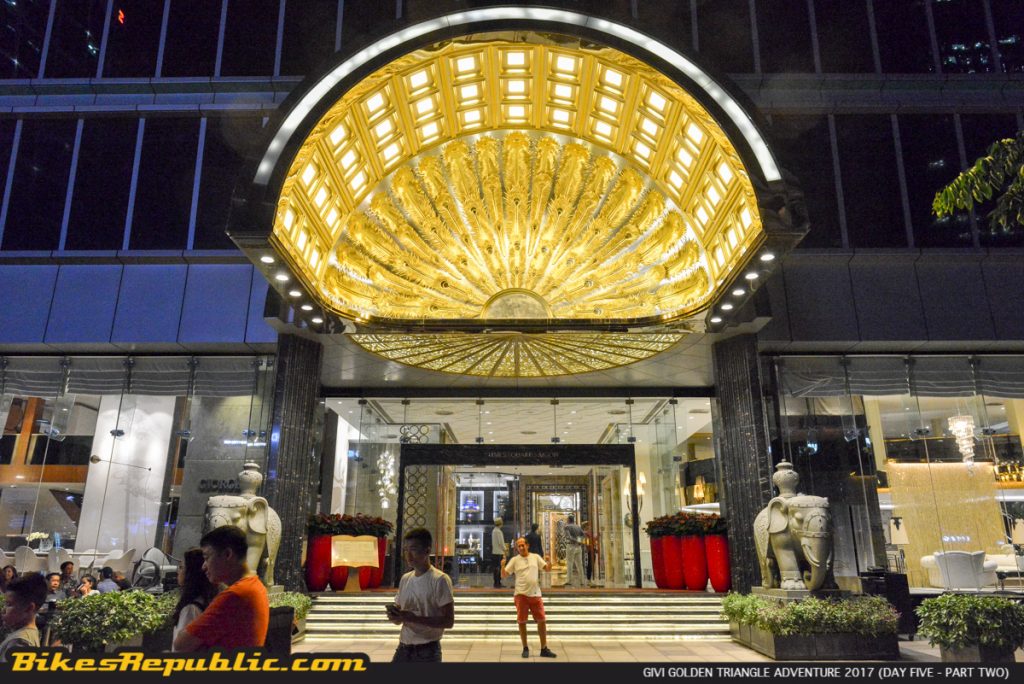 The concert was over by now and the street was reopened to light traffic. Pretty Vietnamese ladies caught our eyes. We stopped opposite the Rex Hotel to shoot a few pictures when we spotted a Bentley Continental GT poking its nose out of a side street. 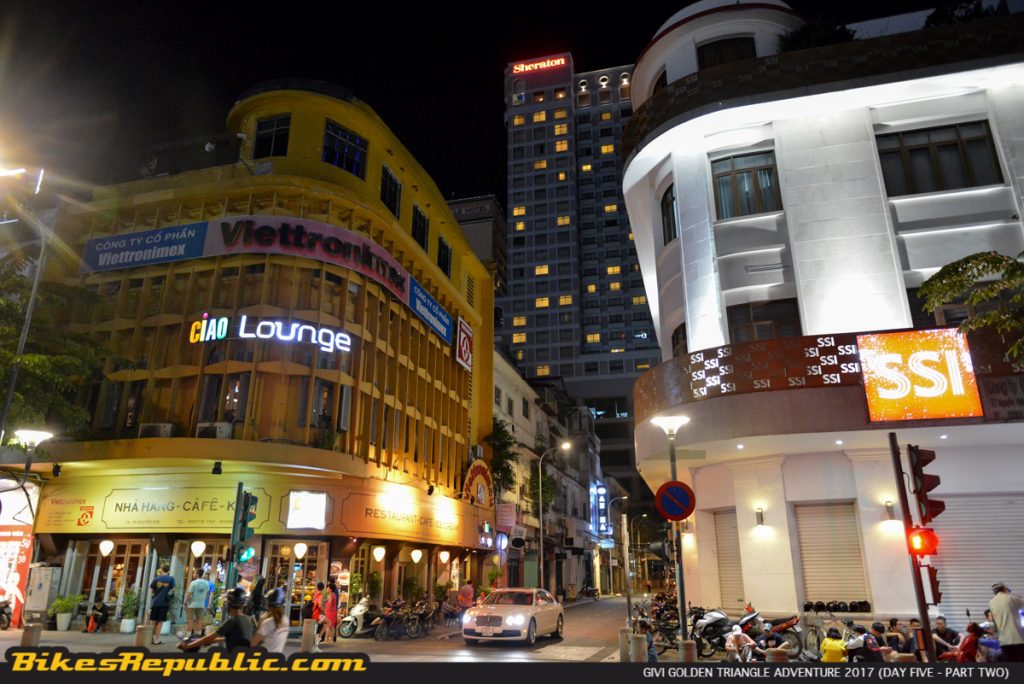 We kept walking and discussed about the ride as we hadn’t done so since this GIVI Golden Triangle Adventure 2017 first started. We were roomies during the GIVI Wilderness Adventure 2015 in South Africa. But we kept getting distracted by the Vietnamese girls. Oh yes, friends have warned us about this. 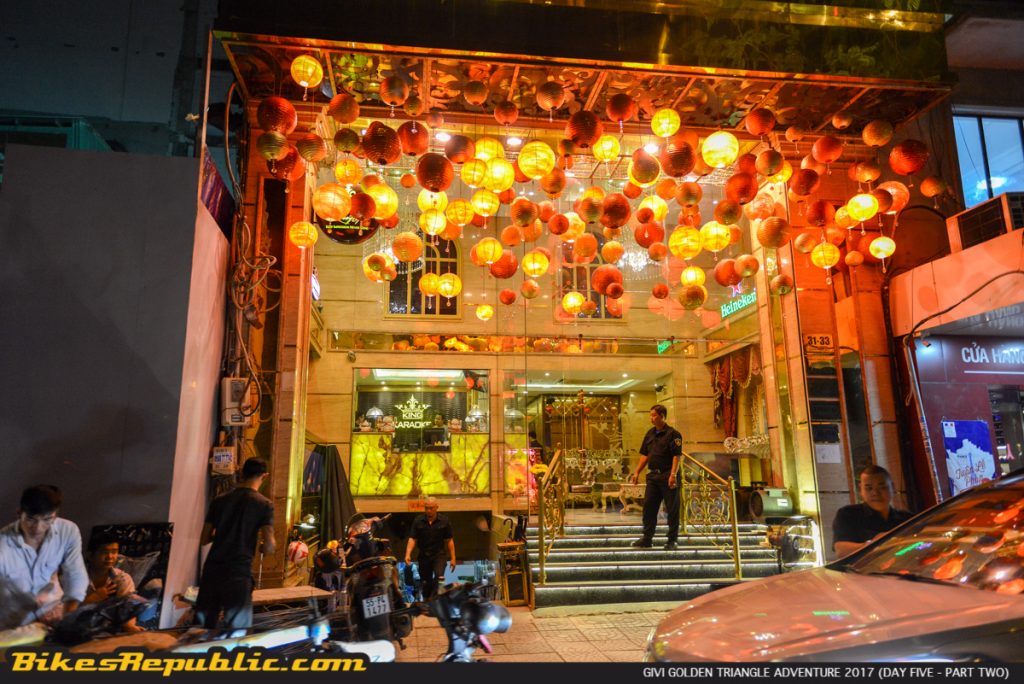 We arrived at the building. It was gorgeous, beautifully restored and maintained. It was the HCMC City Hall. We got busy photographing it when we heard the roars of sportscars. They were Ferraris and Lamborghinis and they charged down Nguyen Hue Street. 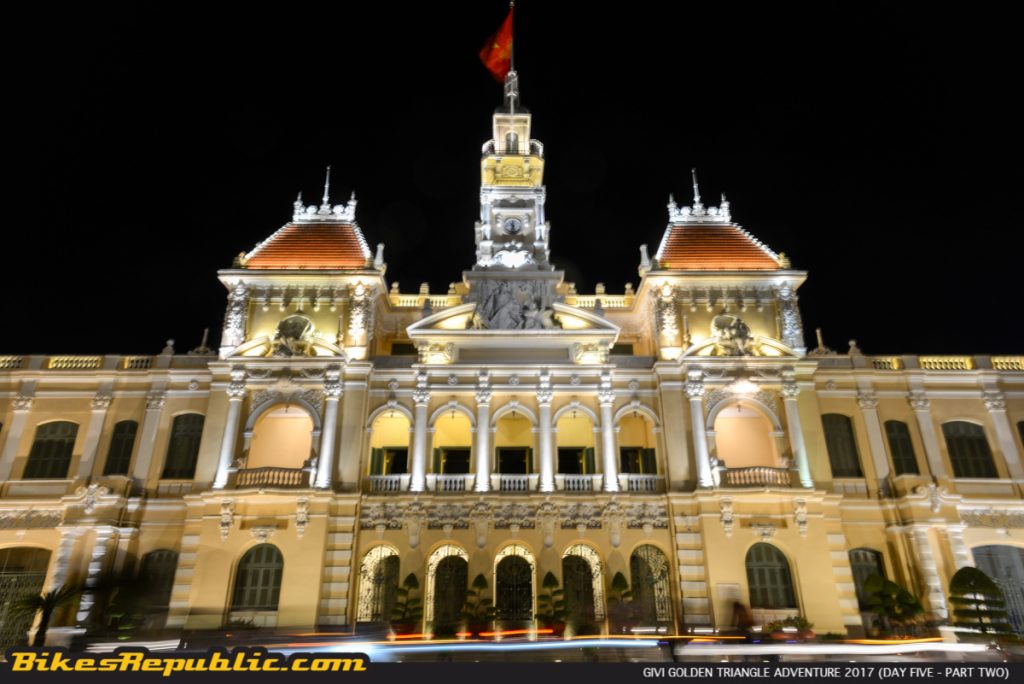 The group had finished their ice-cream and caught up with us there. They too started shooting the pictures of the City Hall. We continued walking and ended up at another prominent classic building, this time it was the Municipal Theatre of HCMC, but better known as the Saigon Opera House. 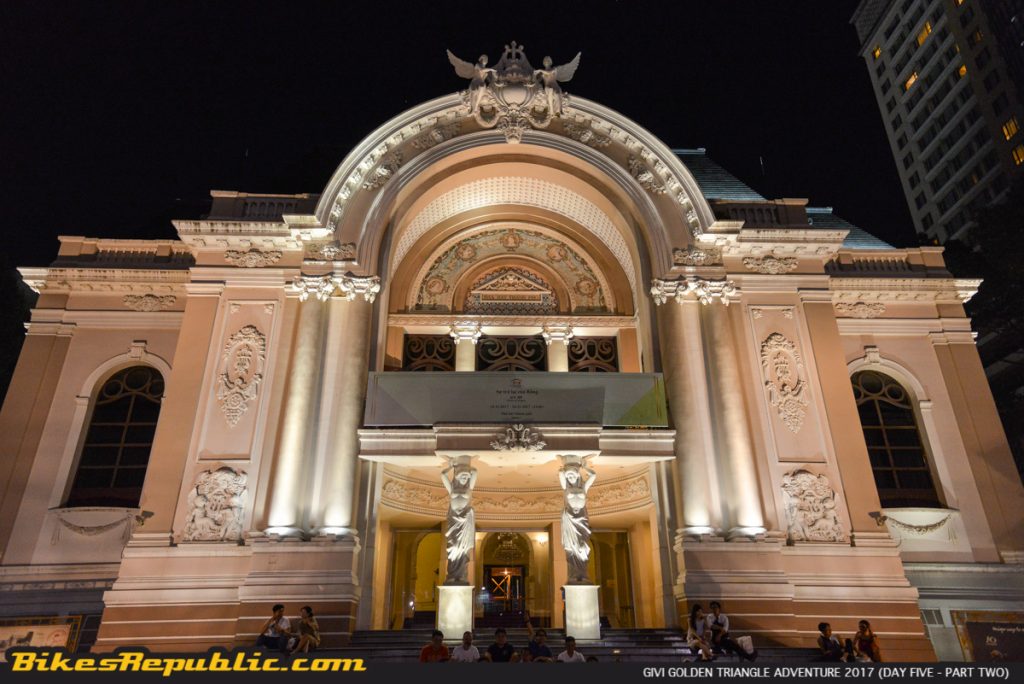 Built in 1897 by French architect Eugene Ferret, and restored in 1995, it was shaped like Opera Garnier in Paris. Right opposite was an old building, with a large “Louis Vuitton” signage on top of the entrance. 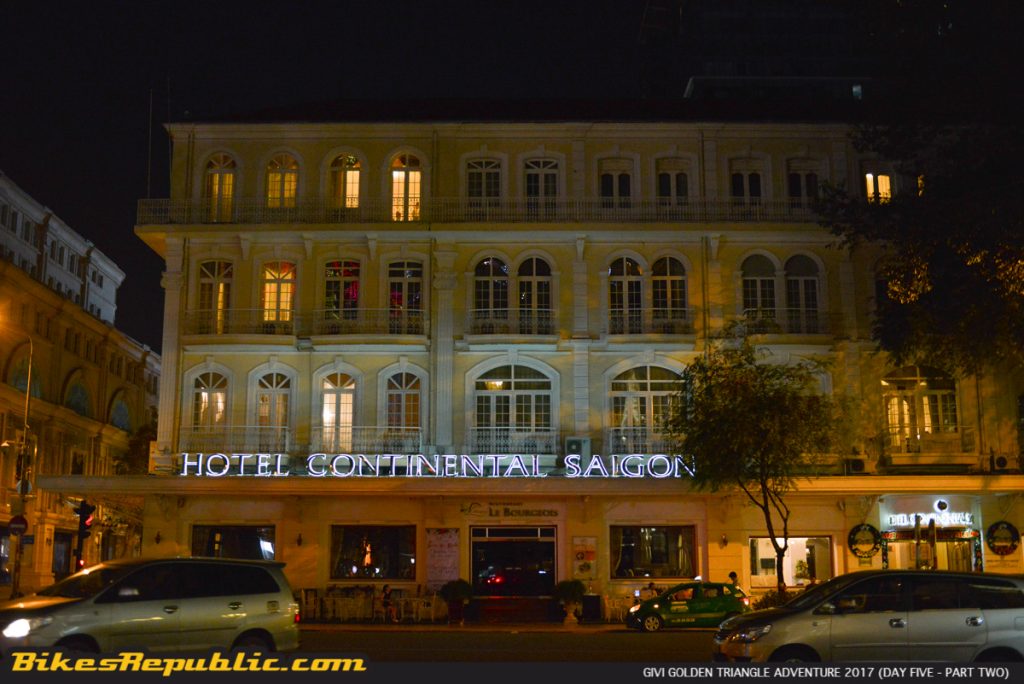 The left side of the building was boarded up as the authorities are building an underground MRT system.

From here, we took taxis back to the hotel in District 7 and called it a night. I regretted that decision as there’s so much more of HCMC to be discovered. For a few Explorers and myself who had been here the first time we vowed to return. The memory of the traffic had faded into oblivion.

Click here for Day Five (Part One) of the GIVI Golden Triangle Adventure 2017.

Click here for Day One of the GIVI Golden Triangle Adventure 2017.