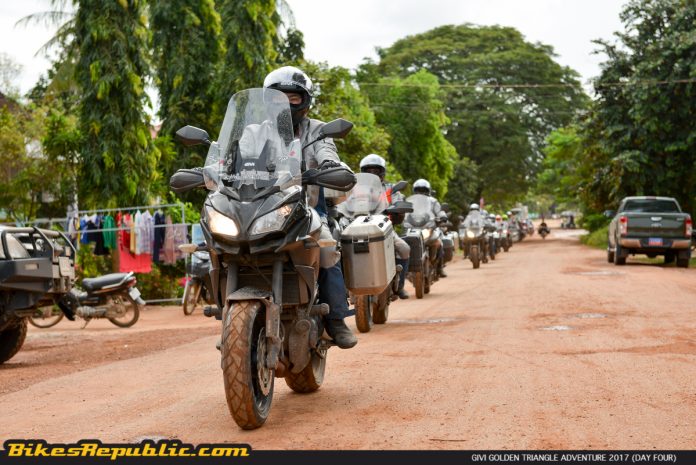 Phnom Penh, 15th November 2017 – As we GIVI Golden Triangle Adventure 2017 Explorers had breakfast and prepared our bikes for the next leg of the adventure in Siem Reap, the rain came down on us.

We pondered if the occasion has finally arrived to test the new GIVI rainsuits (made specifically for this GIVI Golden Triangle Adventure 2017). One of the Thai marshals, Nok (full name: Sitthithat Ritthikraironnaka), consulted his weather radar app, and informed us that it was only a passing cloud that’s headed away from out travel route.

We hopped our bikes as soon as the rain subsided, as we had been delayed for an hour. Today’s destination was Cambodia’s capital, Phnom Penh, 315 kilometres away.

Again, we rode through the slightly chaotic urban Cambodian traffic before breaking clear and opening up in the countryside. Much of Cambodia is very flat, with rice paddies on both sides of the road. The rain had turned the roadside laterite into mud and some of it had been thrown onto the road surface itself, so we took it easy. 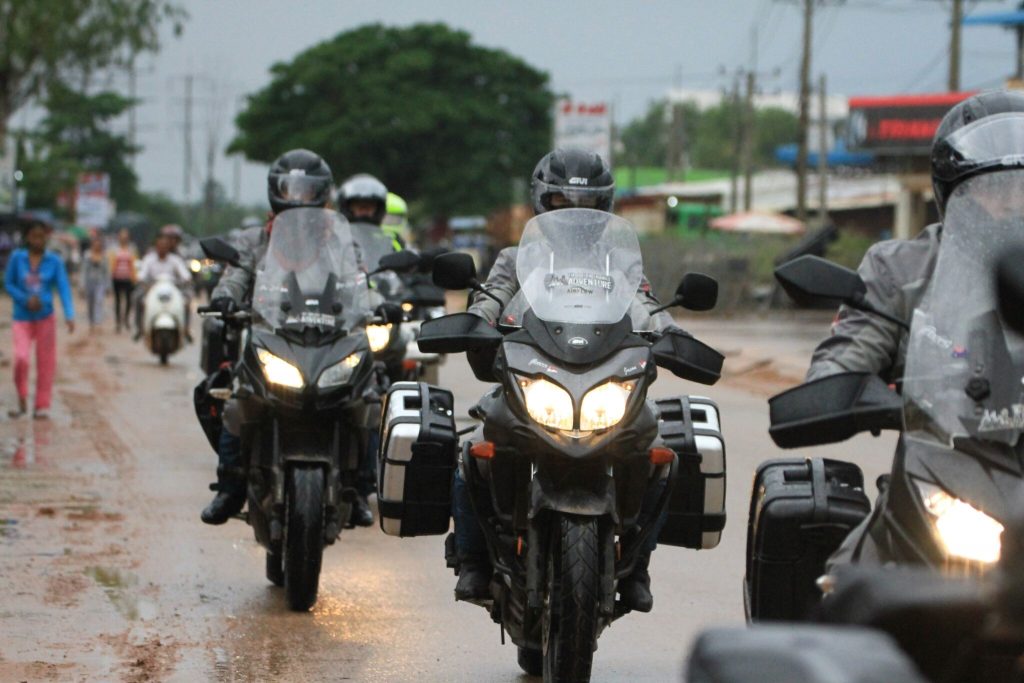 We were actually travelling south, adjacent to the great Tonle Sap Lake to the west (on our right) but heavy foliage and built up areas obscured our view. Shame.

There were many cows grazing and chewing on their cud serenely right up on the road shoulders. It panicked me a few times initially as I’ve grown wary of livestock crossing the road back in my wife’s kampong in Kuala Pilah, Negeri Sembilan, prompting me to stick my leg out to warn the other Explorers behind. But it had been unnecessary as the ones in Cambodia stayed off the roads. “Cows here are much smarter,” remarked Giorgio Dalla Rosa, GIVI Vietnam’s Factory Manager, when I recounted the experience to him.

By the way, speaking of the word kampong, villages in Cambodia are incidentally called the same as we do in Malaysia, for instance Kampong Kdei, Kampong Thom, and so forth.

We rode 63 kilometres out before the marshals called for us to pull off the road on another ornately designed bridge, similar to the one we saw at Bayon yesterday. Just as well, the heat and humidity had returned after the downpour.

Known as the Kampong Kdei Bridge, and officially known as Spean Praptos (some called it the Naga Bridge), it was also built in the 12th century during the reign of that Jayavarman VII guy, the same King who commissioned the construction of the temples we visited in Siem Reap. 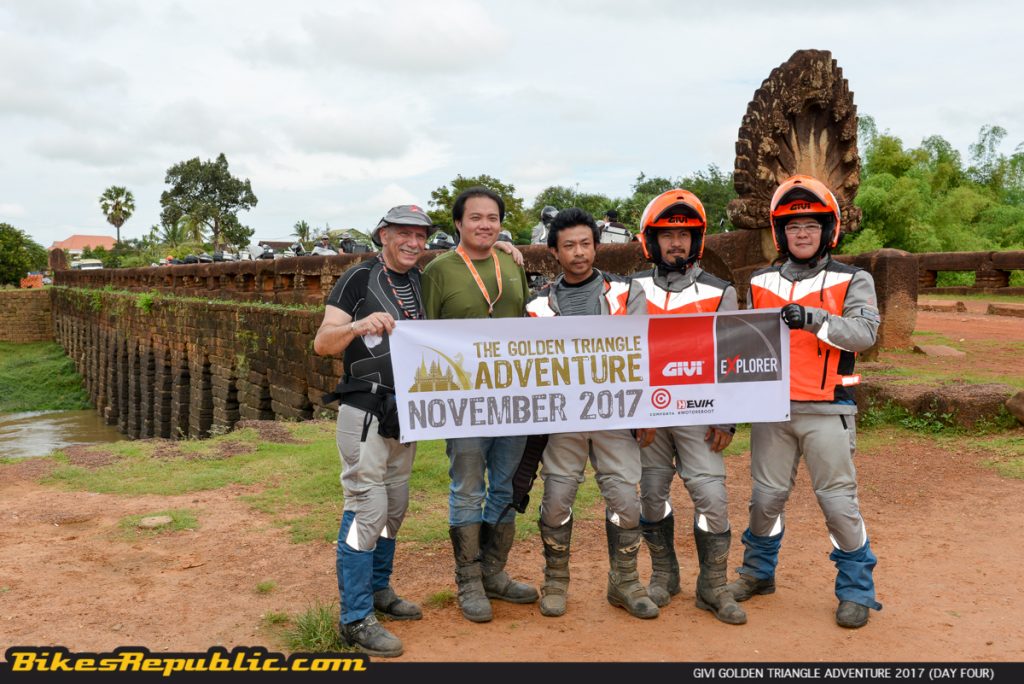 The bridge was one of the world’s longest corbeled stone-arch (same building technique at the temples in Angkor) bridge and one of the few Khmer Empire’s bridges to have survived to today. The stone railings on both sides end with carved articulated cobra heads. 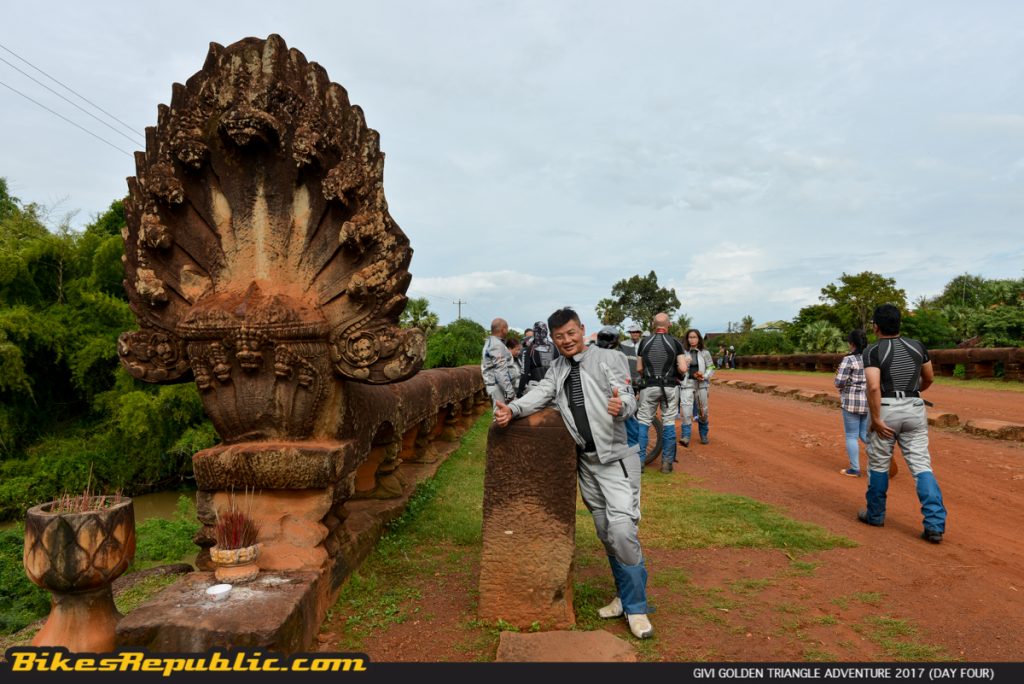 Anyway, we noticed a few locals shooting pictures of us with Nikon DSLRs as we maneuvered our bikes to park along the bridge, and as soon as we got off, the same ladies were already there with the pictures they shot and mounted, “Photo, photo, Sir? 5 dollars.” Wow! Their speed was even more impressive than their enterprising spirit! 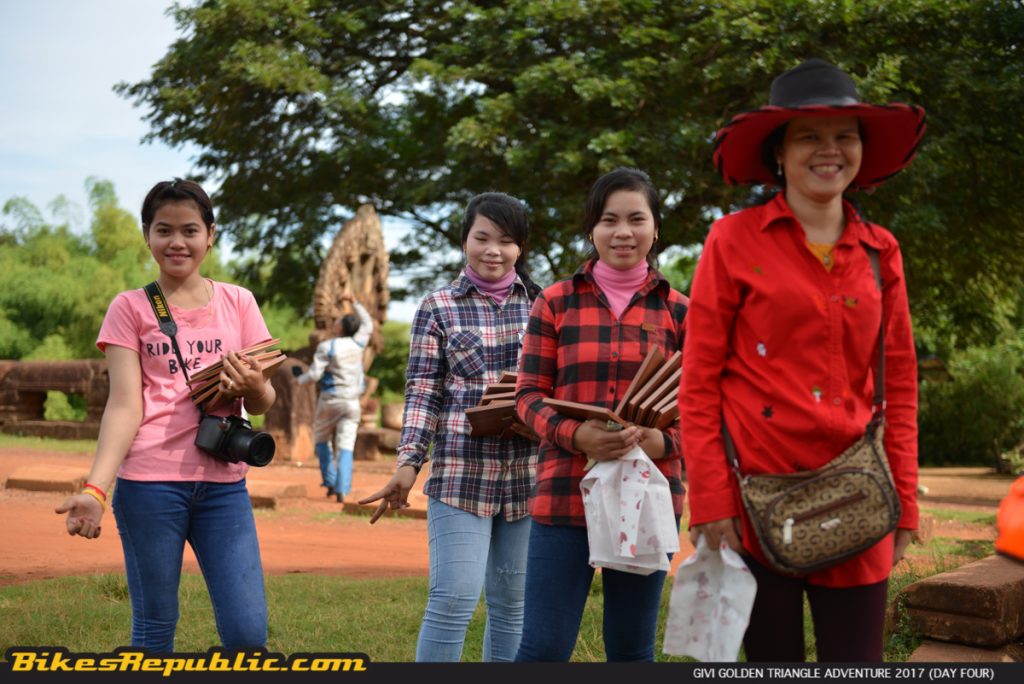 However, the locals (without DSLRs) had also come out en masse to greet us. Well, more like to witness this group of bikers on big bikes attached with all sorts of space-aged equipment visiting their kampong. 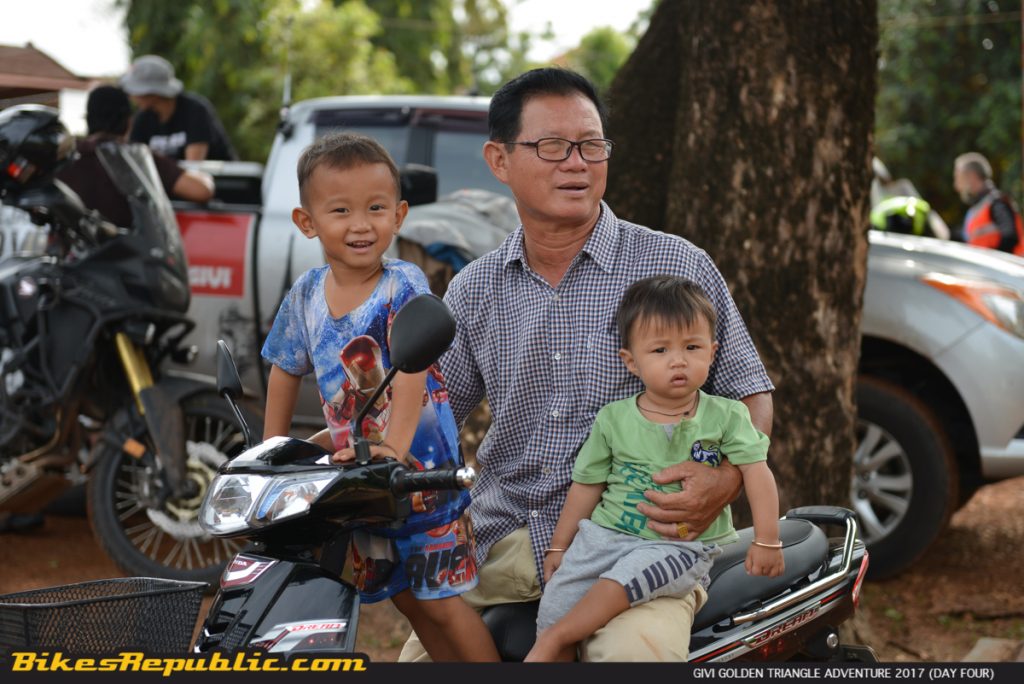 It was heartwarming to see the children smiling in all their innocence when we waved at them. 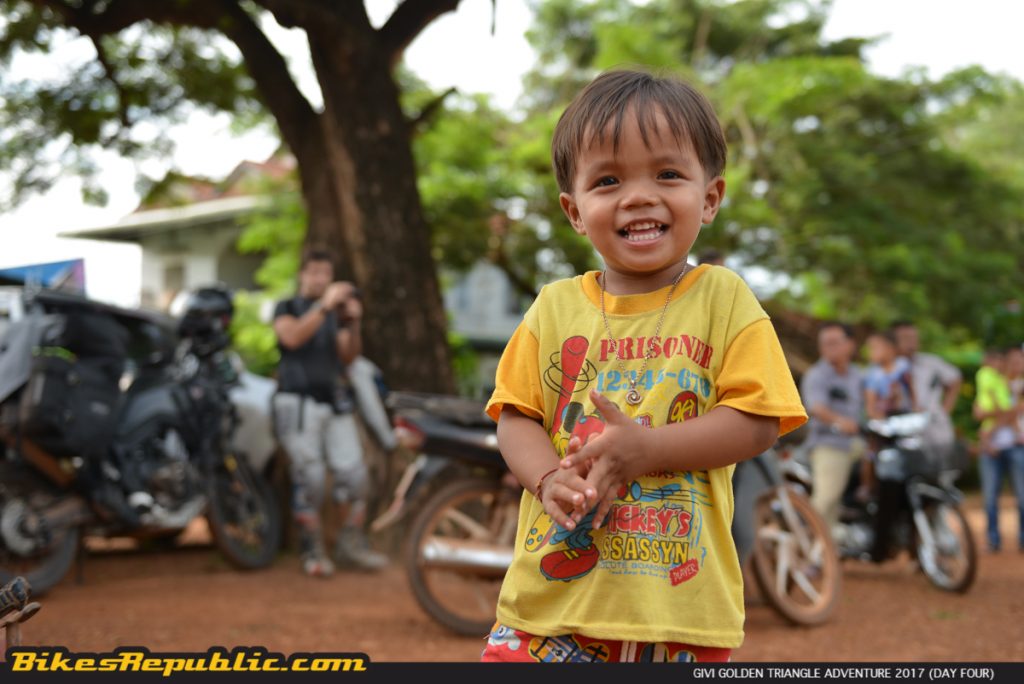 Later, we watched as a mini bus unloaded a crowd of loud tourists (no prizes for correctly guessing where they’re from) before commencing with our own photography and drone video session of the convoy crossing the bridge. 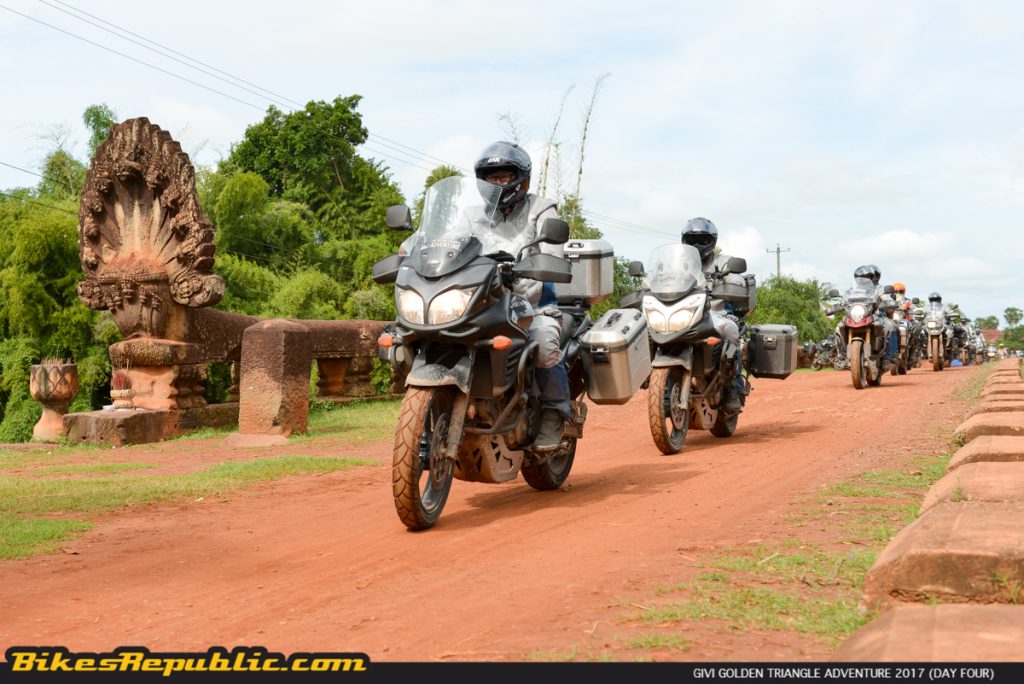 We then continued on our way riding on a wet dirt road. I love offroad riding.

The GIVI Golden Triangle Adventure continued on its way after lunch. It was a great break from the Cambodian humidity, that’s for sure, as we gulped down jugs of water. Credit also need to be given to the Thai support guys as they would invariably bring in hot water and coffee for the Explorers. 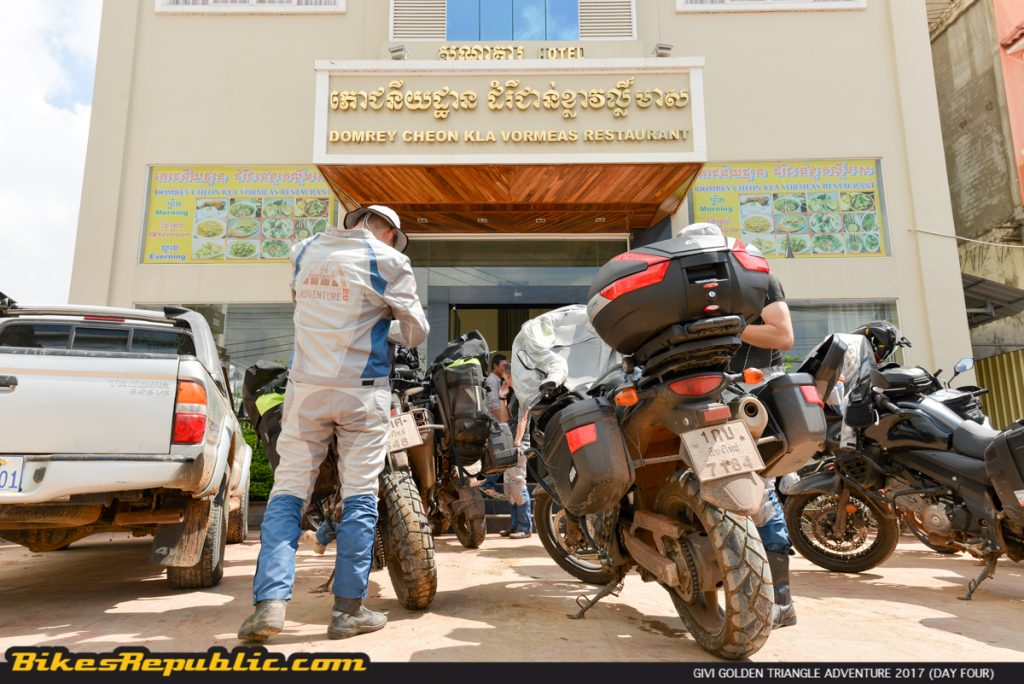 We were greeted by heavy traffic in the form of mopeds and scooters, a few with more than two occupants onboard. The riders tend to overtake each other without checking what’s behind them, and I noticed none of them actually looked in their rearview mirrors, not once. So why do they have mirrors…? Well, nevermind. 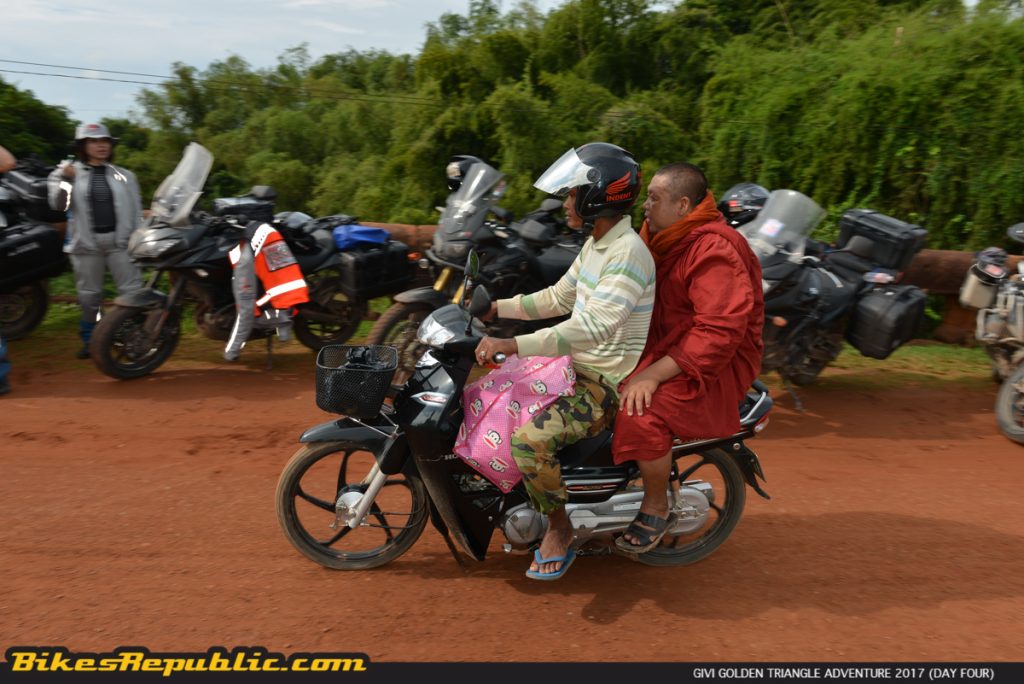 We maneuvered around them as best as we could, but we were just as unaccustomed to them as they were to us. They’d cut pass our front wheels as if we weren’t there. On the other hand, we were worried about them being unaware of us having side cases and panniers – the local riders may think we’ve passed them and end up being hit by a box. 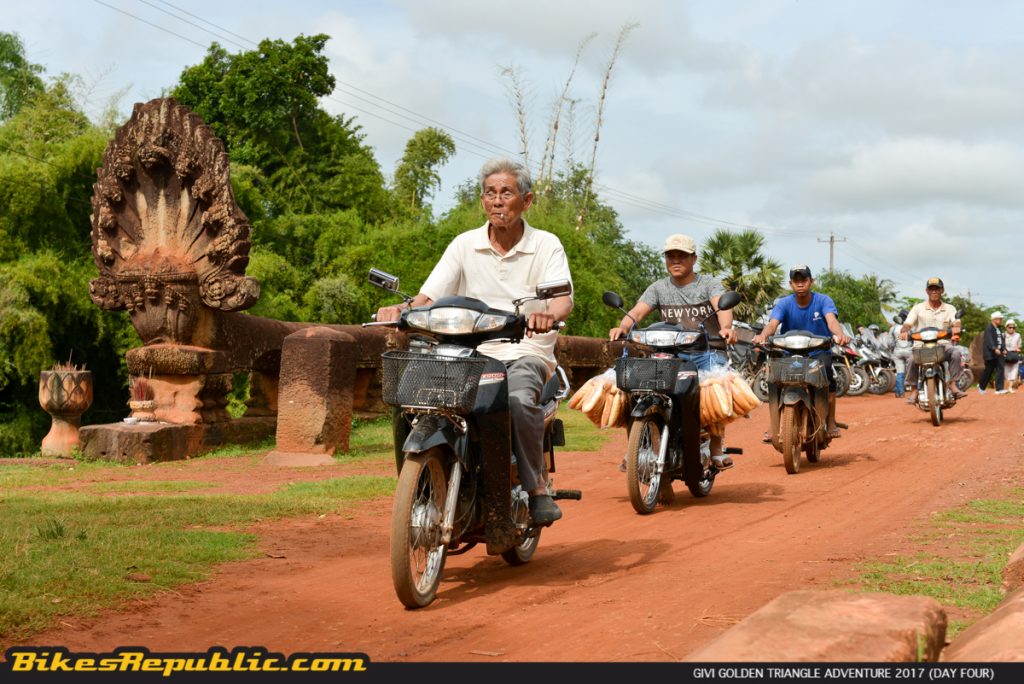 The Explorers got away safely and arrived at Phnom Penh Hotel, but a few of us went back out to shoot pictures for GIVI. With just four riders in the group, we rode in a super tight four-ship formation, preventing ourselves from being cut off.

We stopped at a beautifully opulent temple complex, all the main buildings seemingly encased in gold, starting from the gate itself.

But the best thing was watching Pietro Ambrioso, GIVI’s Official Photographer at work, shooting the photos for GIVI’s official catalogs and website. 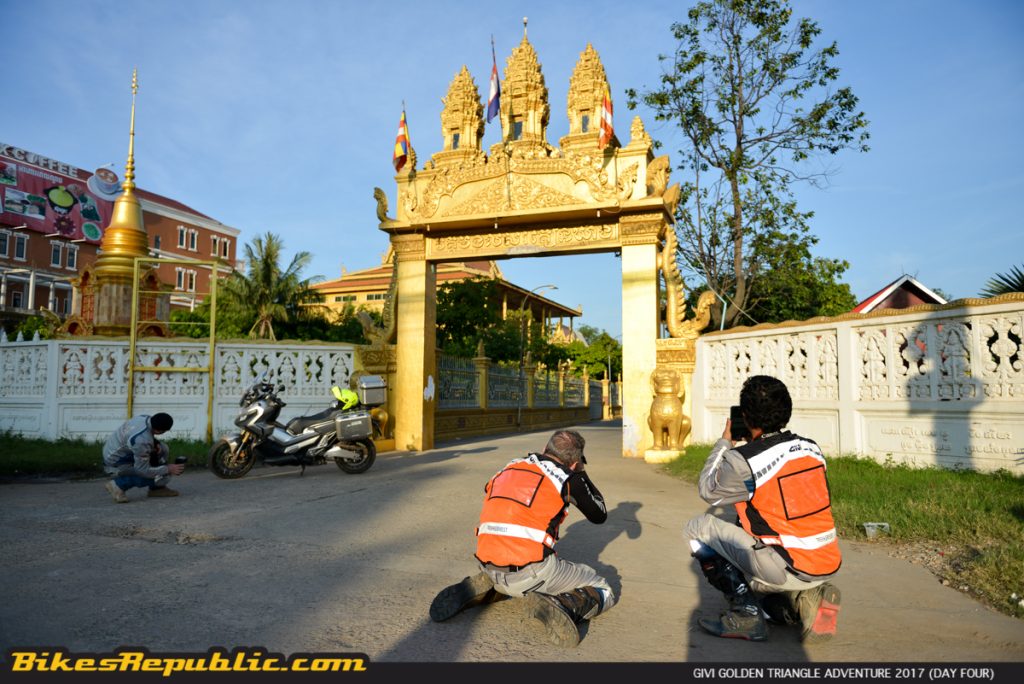 We rode back to the hotel, witnessing how luxury SUVs cut into traffic, pushing plebs aside. But we were told that the traffic in Cambodia so far is only a warm up for the main event: Ho Chi Minh City, Vietnam. 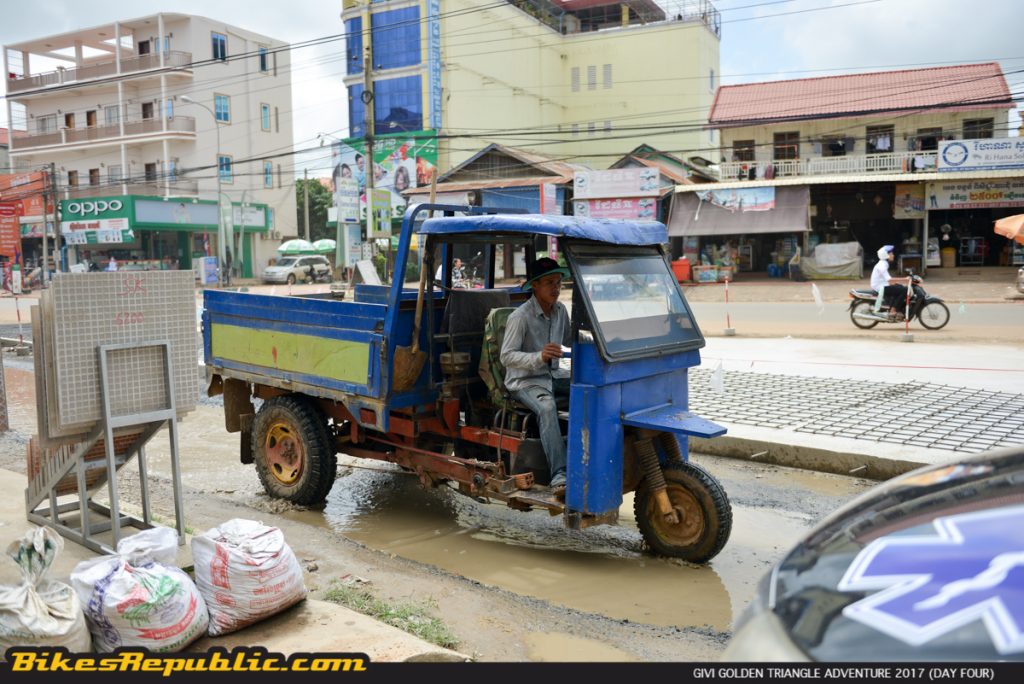 It was here that I saw how the GIVI cases looked like after riding through the weather. They were more or less encased in mud, but no water nor soil got in. Thank God, ‘cos my laptop’s in there! 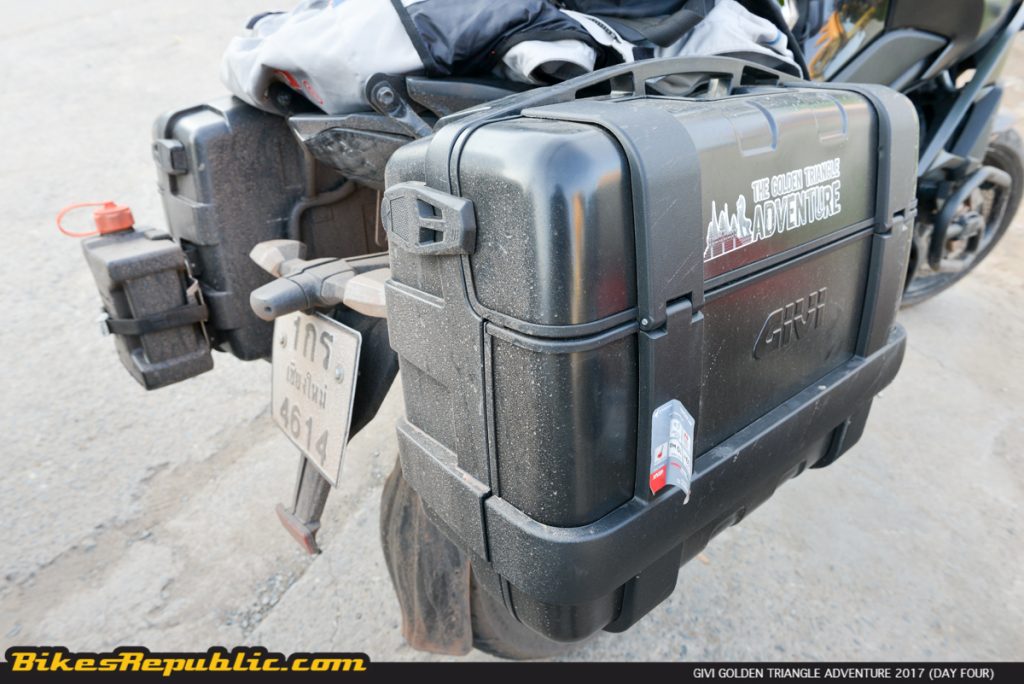 A few Explorers took to the riverside for some nightlife while many chose to rest for tomorrow’s ride into Vietnam.