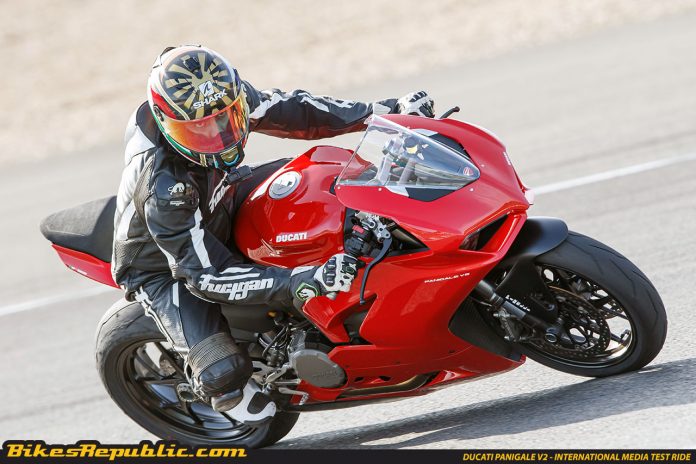 Turn five of the Jerez Angel Nieto circuit is a tricky one, especially for first timers. A fast flowing corner that suddenly tightens to catch you off guard and then threatens to send you off into the kitty litter. 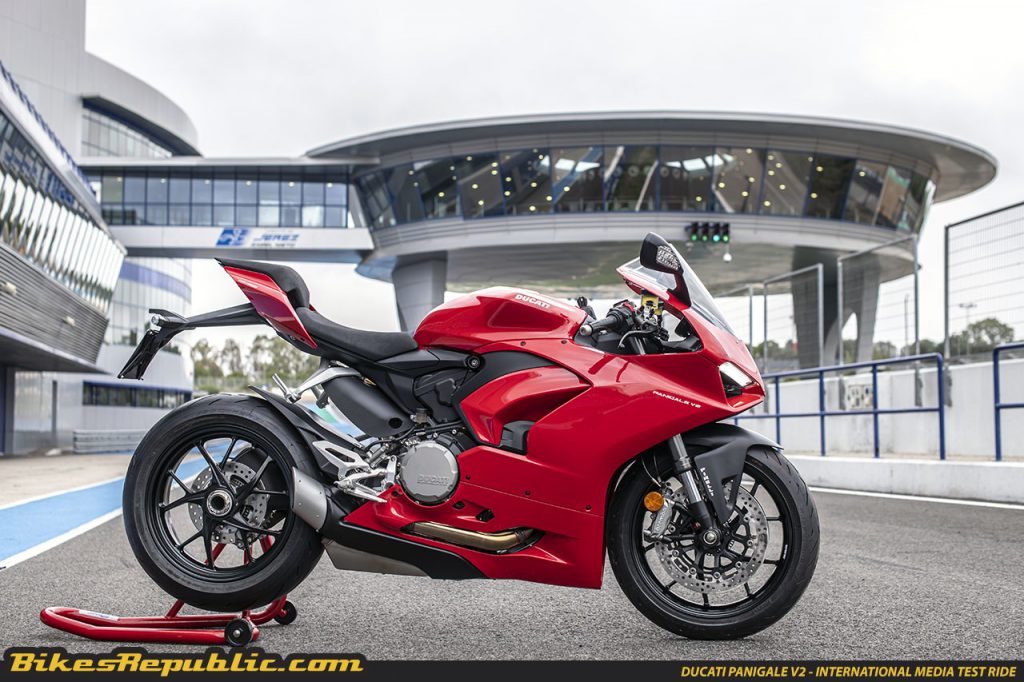 I will not confirm it but I might have soiled my pants a little the first time I rode into the corner. After a few laps, I figured out the trick is to turn later than your instincts tell you to, holding your nerve as the edge of the 35 year old circuit rushes at you. 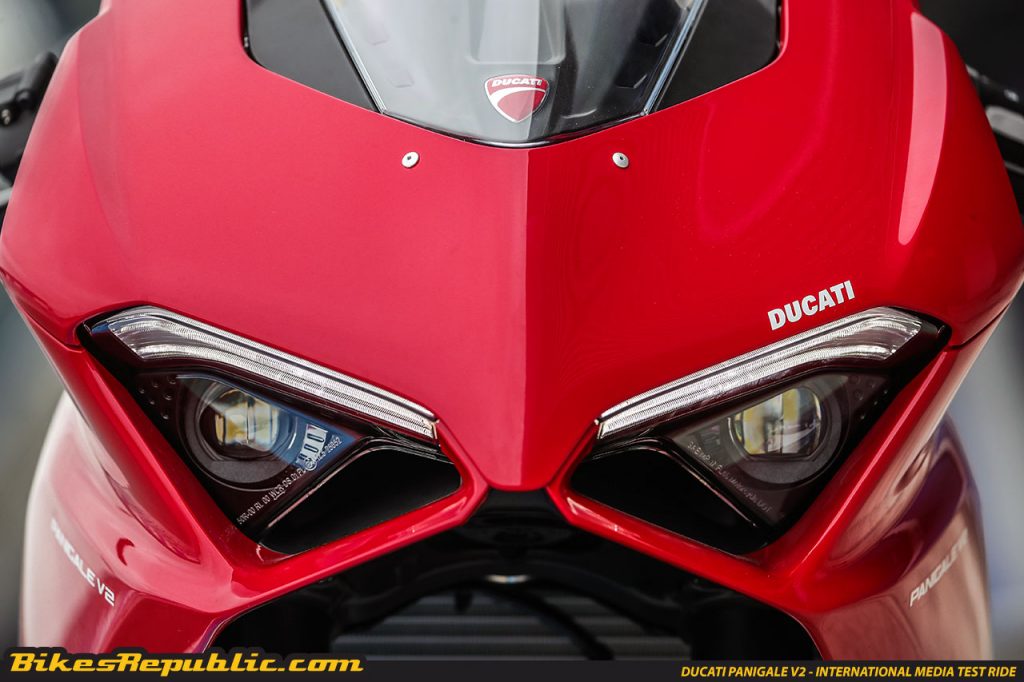 This has led to new found respect for MotoGP riders who race on this very circuit. The track is tight, fast and daunting. In comparison, Sepang Circuit feels like a multi-lane Californian highway, while Jerez feels like you’re racing down one of those tight Spanish village roads. 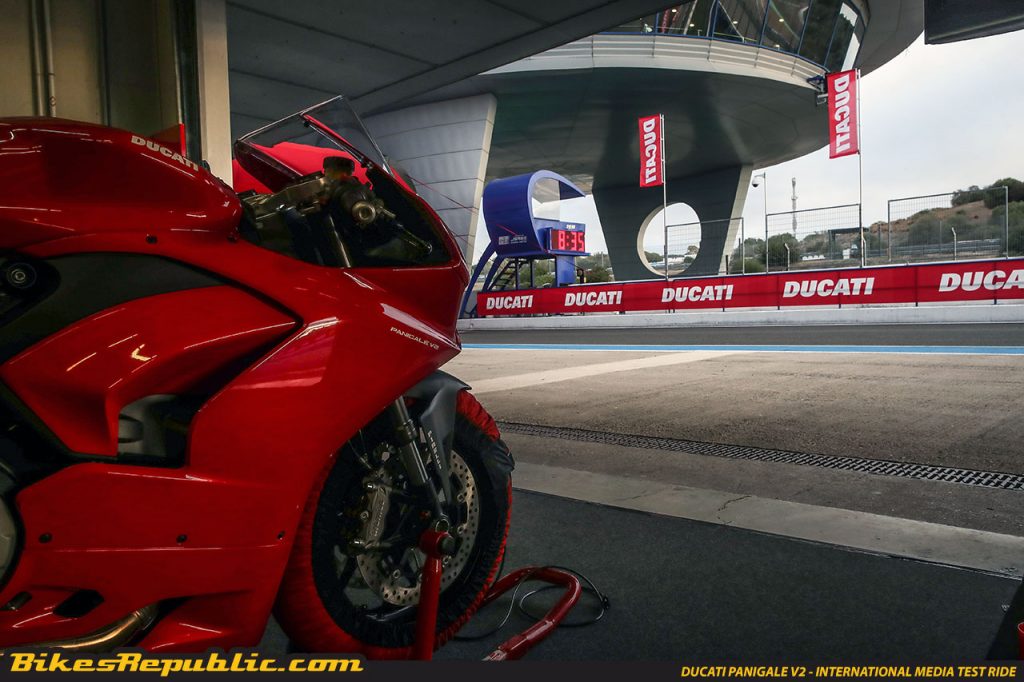 Good thing then that Ducati gave us a good 10 minutes of “familiarisation” time during the international media test ride of the brand new Panigale V2. 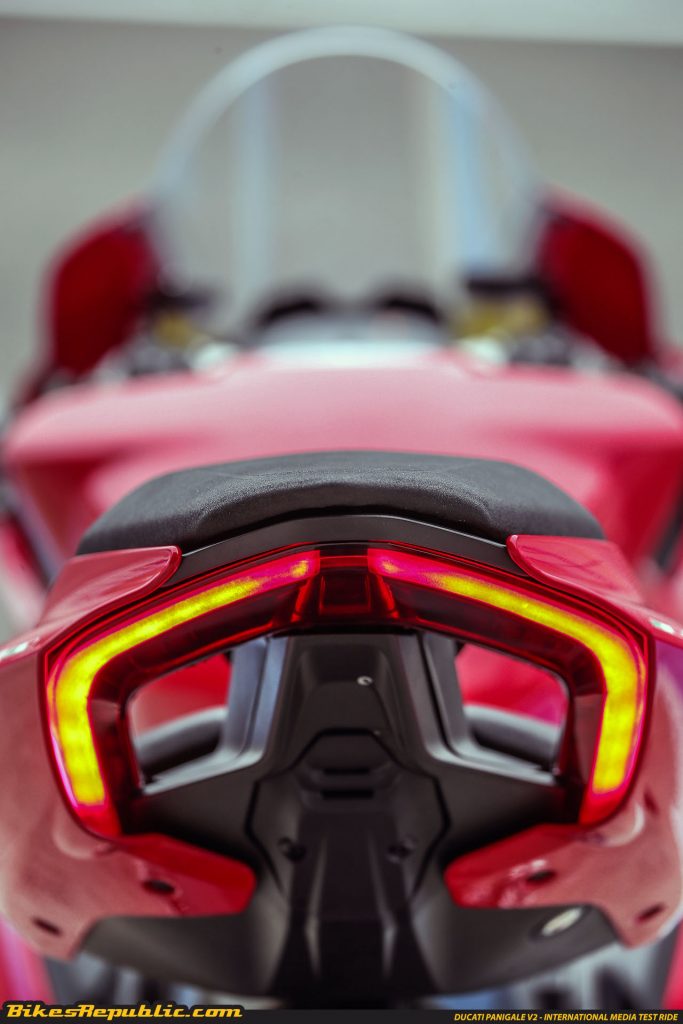 Turn five may be tricky, but the V2 is nimble and obliging; I had already found “my line” by the third lap – however slow the lap may have been. 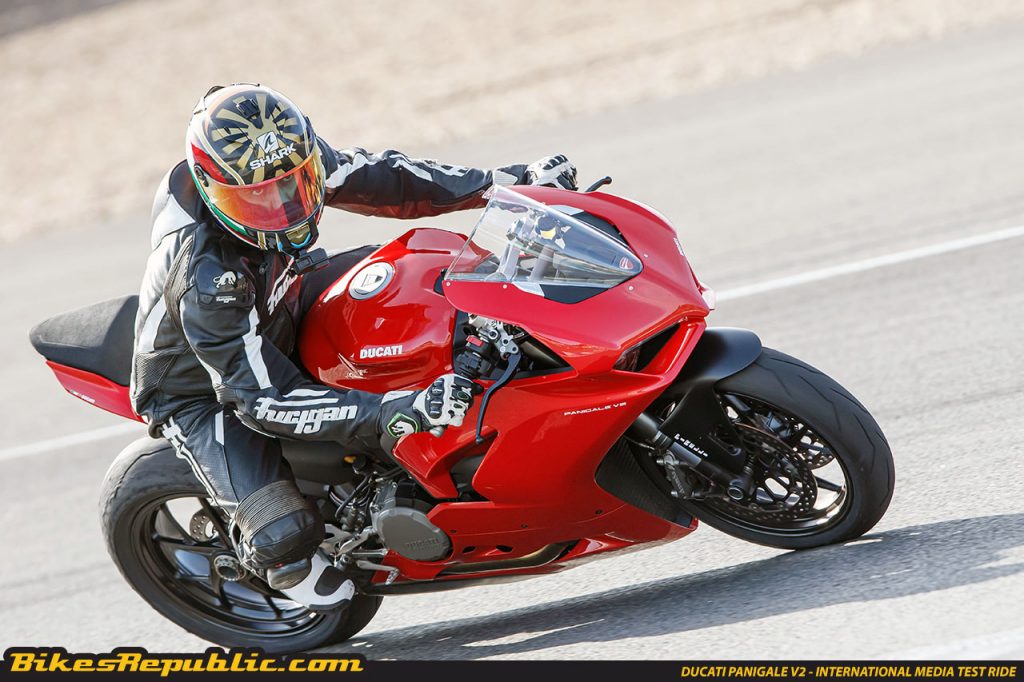 But it wasn’t the corner that surprised me, it was how placeable the Ducati Panigale V2 was and how it responded so easily to what I asked of it.

A little roll off the throttle, a little more lean, point it where I wanted to be, add some squirt, and voila, I was at the exit of turn five at the long back straight heading to turn six. 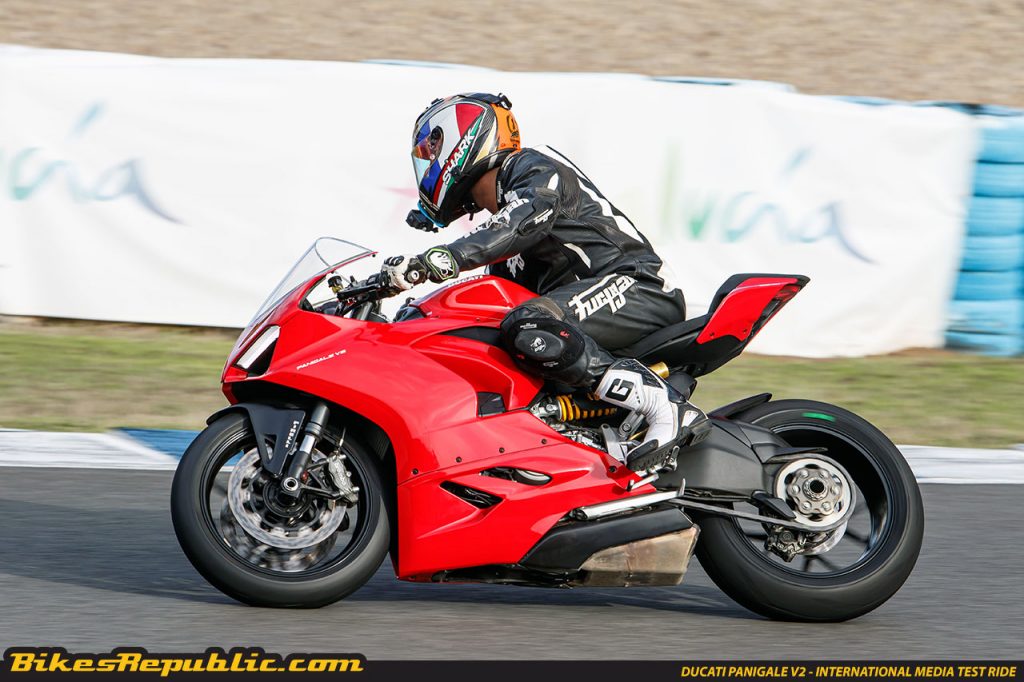 Now I’m no track junkie, and neither am I a hardcore speed demon who “backs it in” every chance I get. In fact I still am a little clumsy on track, just as I am with chopsticks. Don’t judge me. 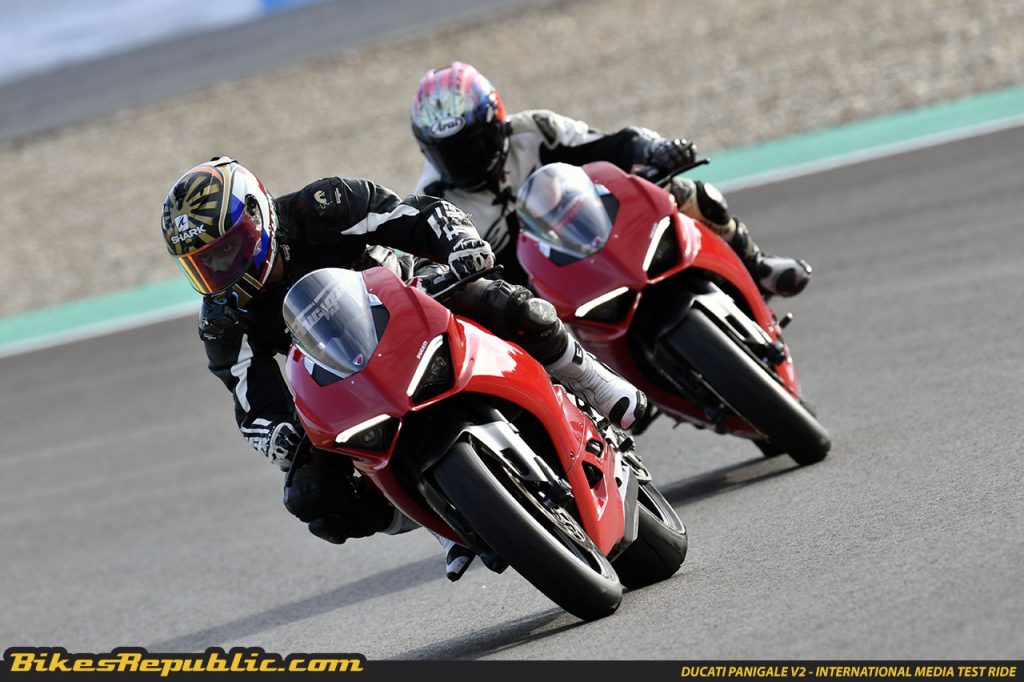 But this is what makes the Ducati Panigale V2 so special – it is such a friendly machine that it suits almost every riding style. And it makes riders like me feel like absolute heroes.

The Ducati Panigale V2 is the successor to the popular 959. The entrée to the world of Ducati superbikes if I may say, lovingly called by some as the baby-Panigale while others hail it as the beginners Ducati superbike. 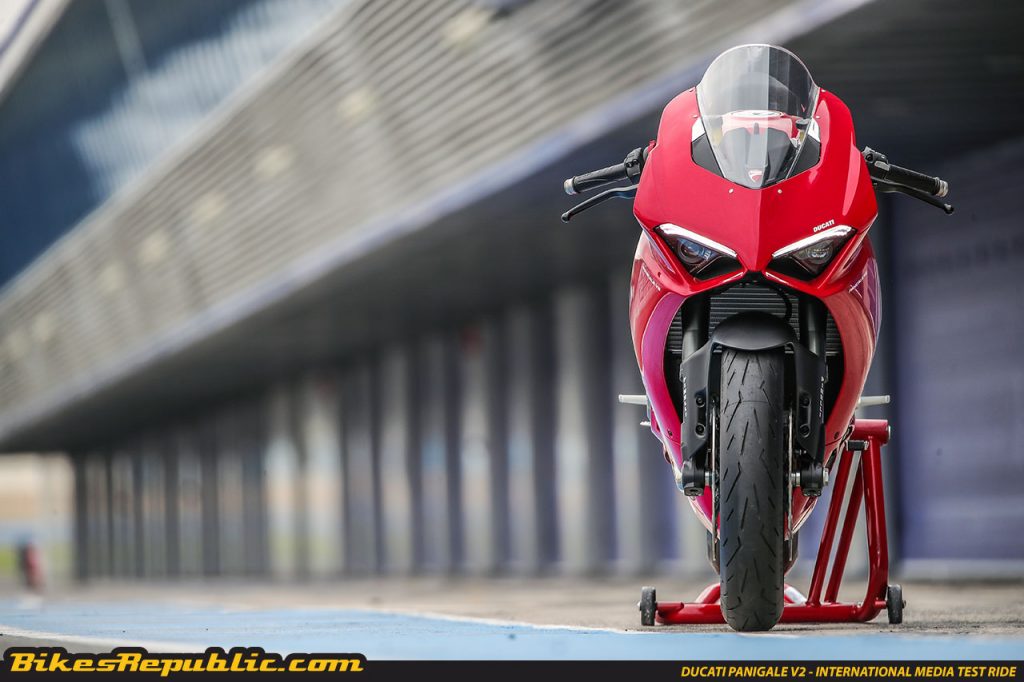 It may look like a watered down version of the V4, and I wouldn’t blame you for mistaking it for one at first. Enthusiasts eyes will spot the grey Showa front forks that are in place of the golden Ohlins on the V4. And I absolutely love the fact that the V2 now comes with a single-sided swingarm, a feature the 959 did not have. 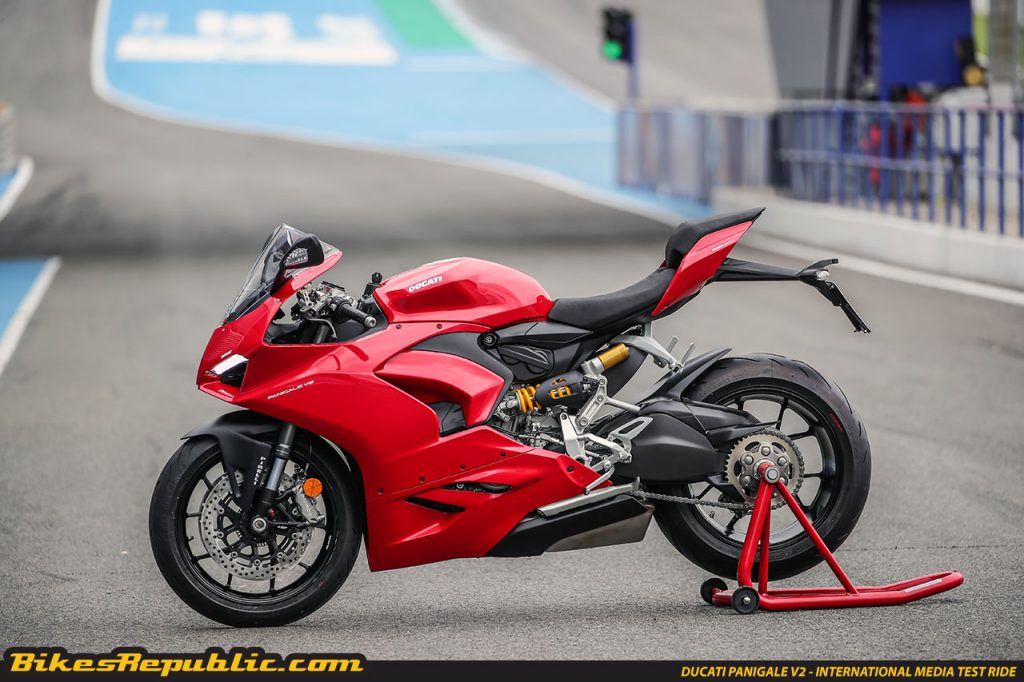 The court of public opinion may differ about the role of single-siders, but I am of the opinion a true to form Ducati should come with one. So tip of the hat to Ducati on this one. 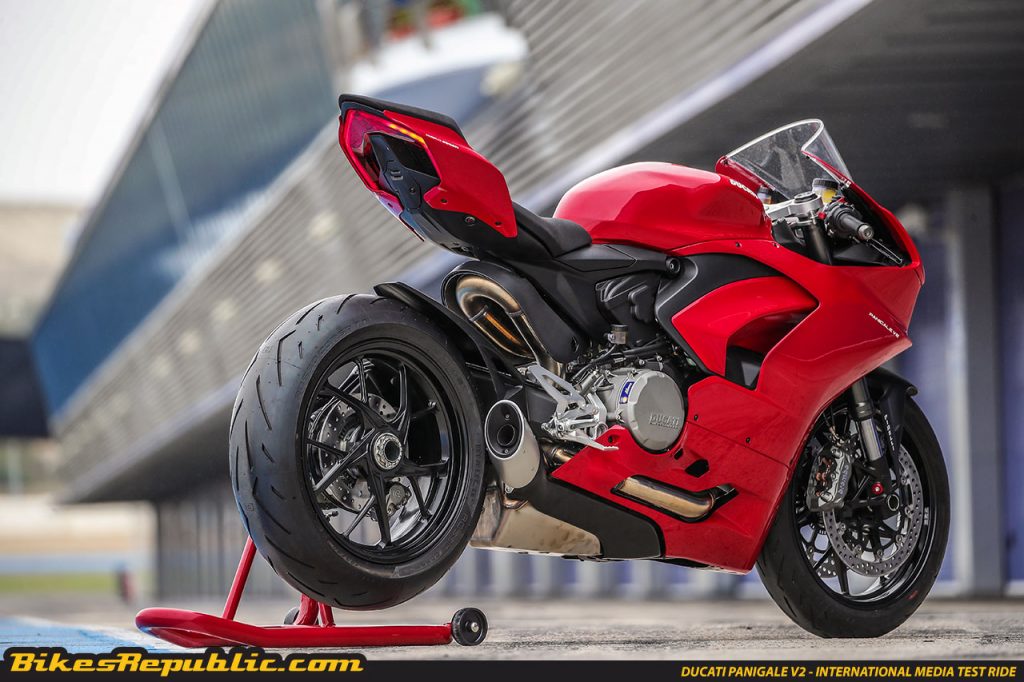 But as for its friendliness, don’t get me wrong. However friendly it may be, the Panigale V2 is a serious machine; one that lets you exploit it however you want but asks that you respect its abilities.

The Superquadro 90-degree twin engine is an evolution of the same 955cc engine as the 959. But as you would expect, further refined for more power, 5hp and 2Nm of torque more to be exact. It is also Euro 5 compliant now, which may not matter to most Malaysian bikers, but it makes the bike environmentally friendly. 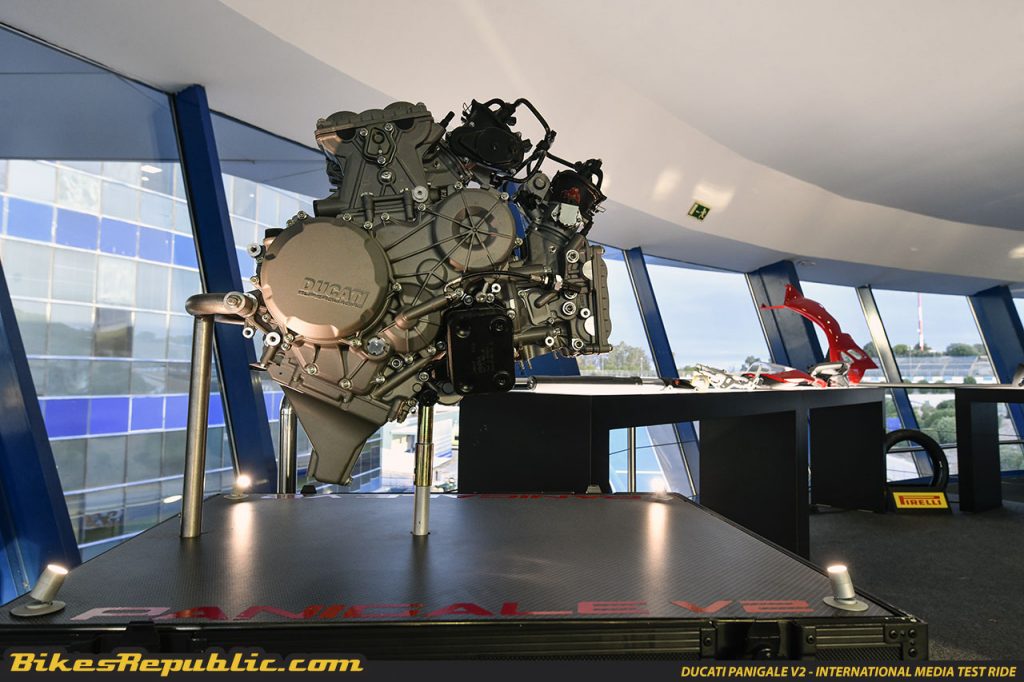 It is a lovely sounding engine even with stock exhausts. It does however love to scream and makes all of its power at 10,750rpm, and it sounds beautiful at that rpm as the video below will show you:

But what makes the V2 truly special is that it is a very clever motorcycle thanks to some trick electronics.

The EVO 2 traction control system for example is derived from Ducati’s MotoGP exploits. This system first made its debut on the top of the range Panigale V4R and has since trickled down to the rest of the Panigale range. 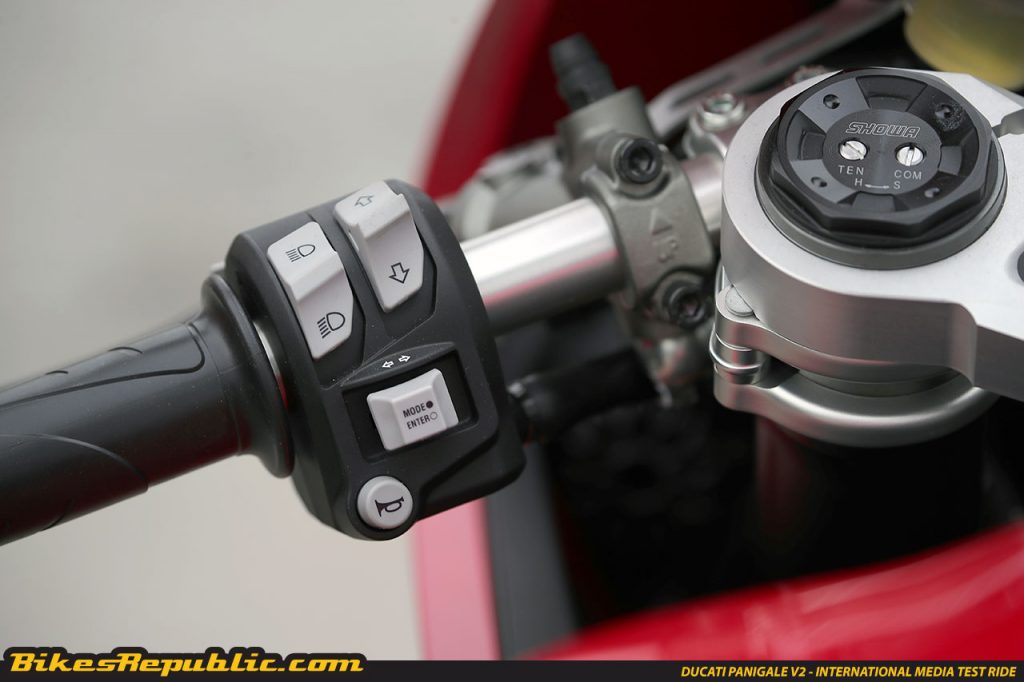 The electronic brain of the bike, a six-axis Bosch IMU, sits at the centre of it all, and the package includes ABS Cornering EVO, Ducati Wheelie Control EVO, and lean-angle-sensitive Engine Brake Control, you guessed it, EVO. 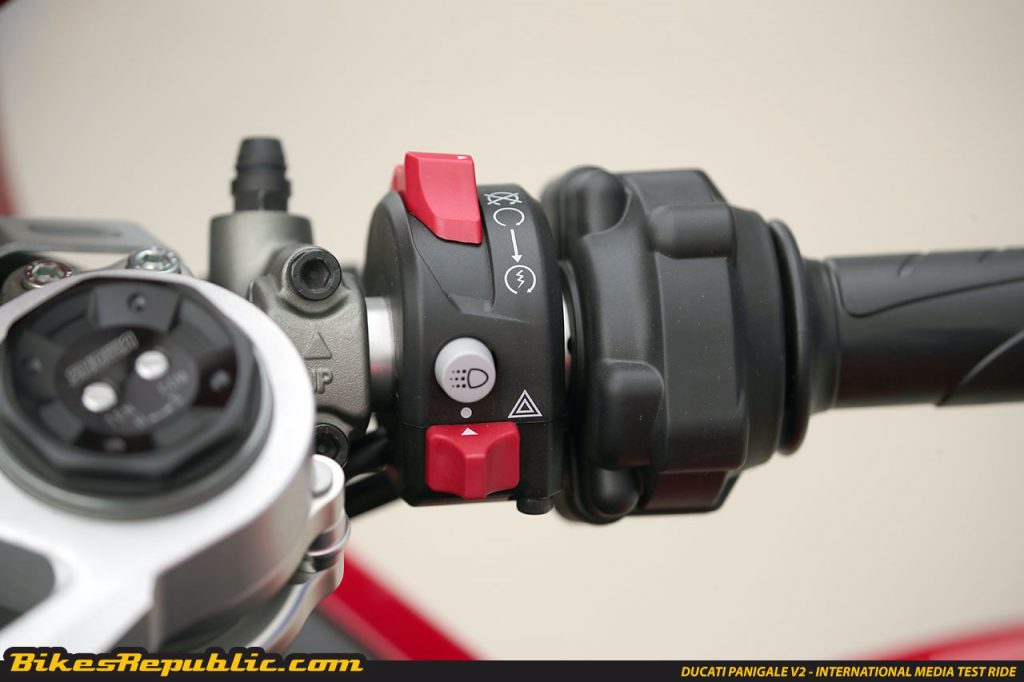 What does EVO stand for? Evolution of course. And in this context it means it is the evolution of the previous systems – smarter to include more variables like cornering ABS, and quicker to calculate everything that is going on with the bike and to deliver the necessary measures such as ensuring you never run out of traction. 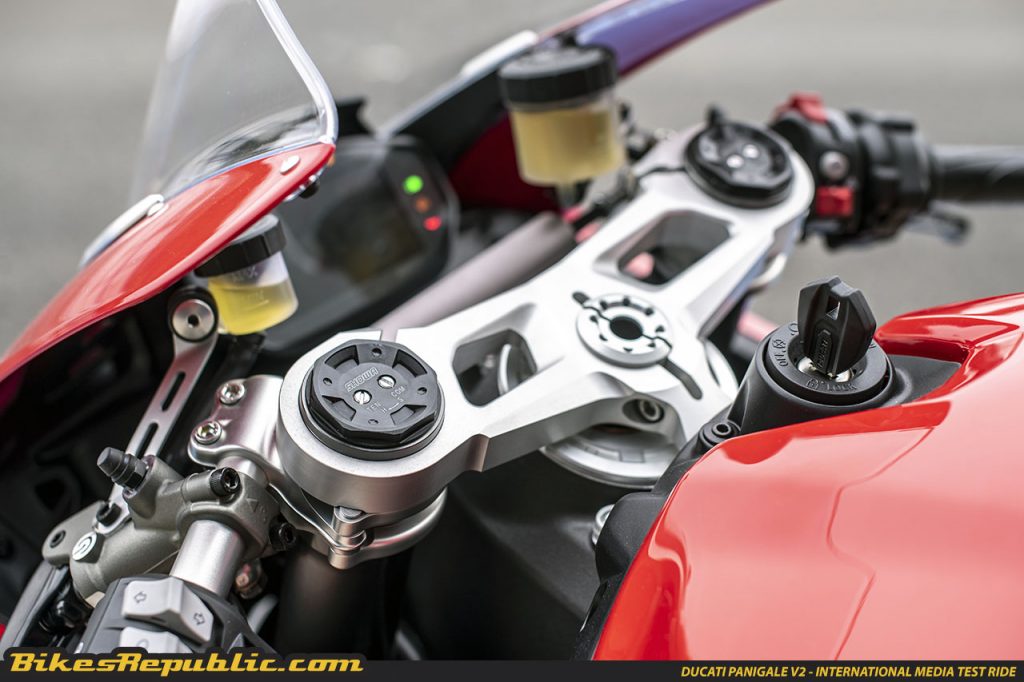 And yes, you can customize the sensitivity of each of these systems, not only by selectable ride modes (Race, Sport and Street) but by sensitivity settings. For example, there are eight levels to the Traction Control and four levels of Wheelie Control. And you can also opt to reduce total engine power as well. Did I say that the bike is incredibly smart? Yes? Well I’m saying it again, the V2 makes you feel like a f**king hero. 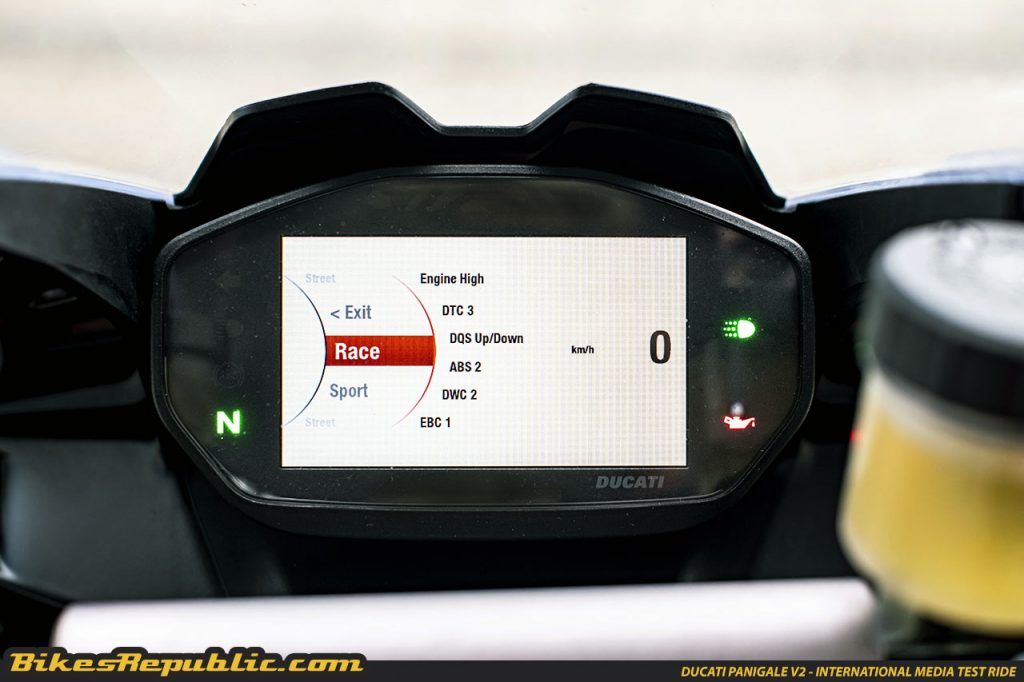 But how do you access all of these systems? Well, there is a smart phone sized 4.5-inch TFT screen, colourised of course. And you can also personalize the way all of that information is fed back to you, with different display modes that changes the way information appears on the screen.

Enough of the dry jargon, how does it actually feel?

Out of the pit lane and onto the circuit, as you can probably imagine, the Panigale feels familiar, almost like a 959 with its slim body and light weight. 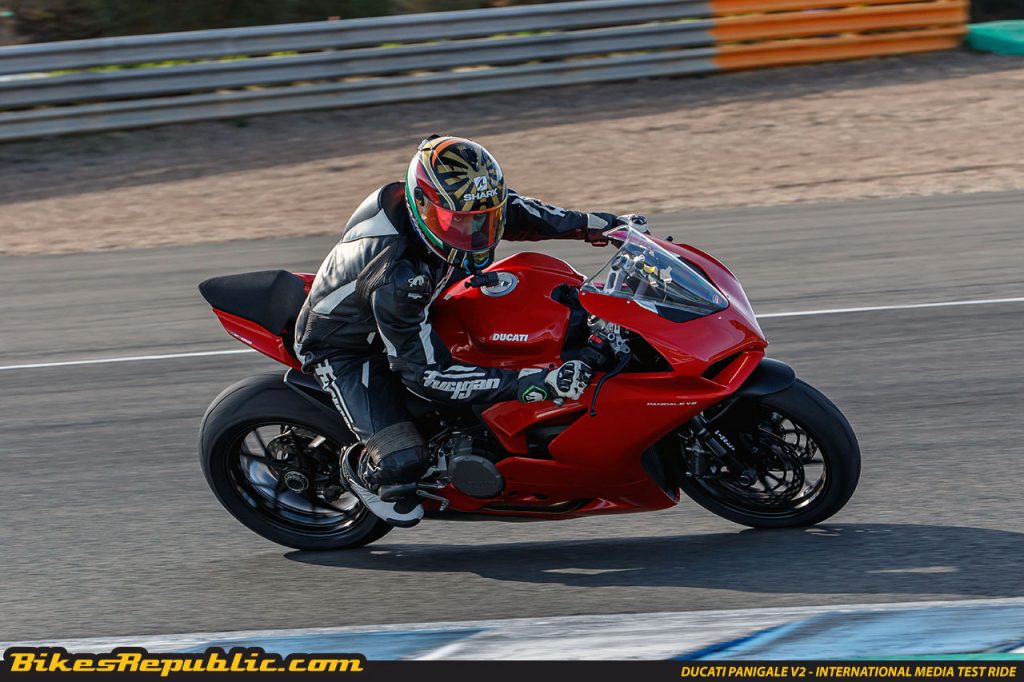 The rear of the bike is about 5mm higher than the 959 while overall trail has been reduced. This gives the bike a more compliant character, one that follows your every move in the saddle.

This also puts more weight onto the front tyre, which gives you added confidence of tucking the front into the corner while the rear simply follows. Placeable is the word here. 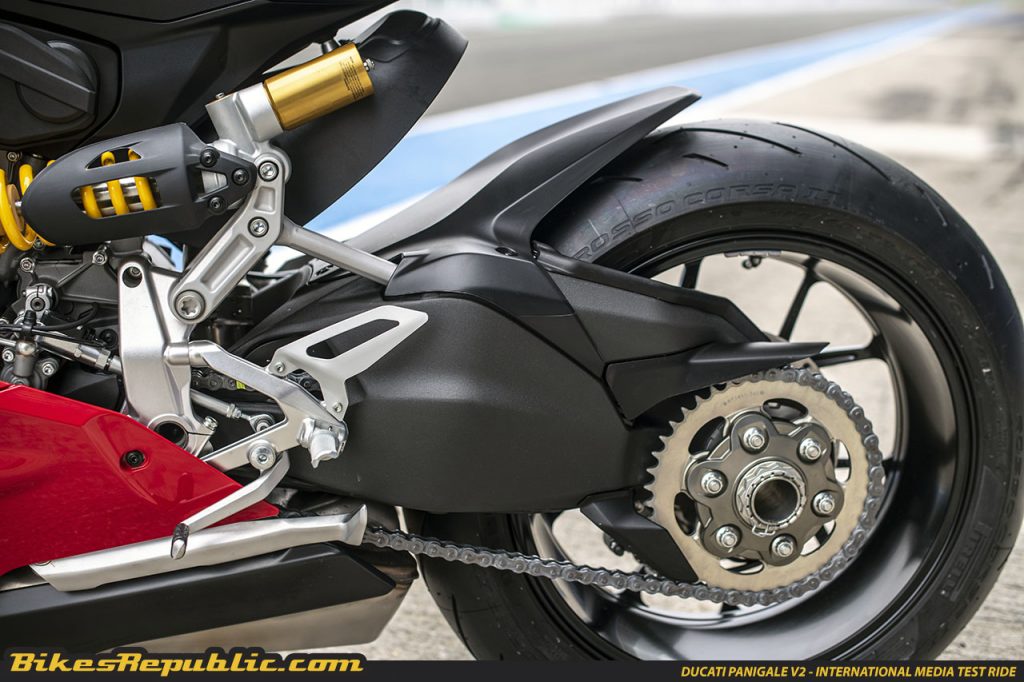 And then there are the tyres – Pirelli Diablo Rosso Corsa 2 – sticky by design and when paired with the genius electronics, gives the V2 a ballistic feel out of corners. This also gives you confidence to drop the bike and pick it up again, ever more aggressively corner after corner. 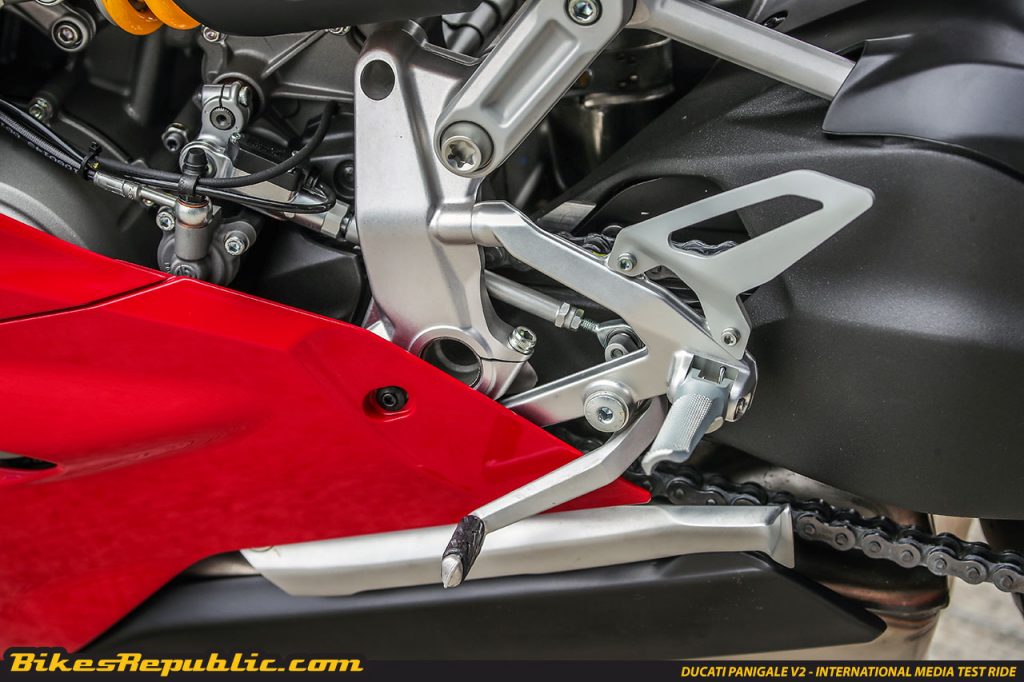 The Ducati Quick Shifter is speed sensitive – the higher the speed, the quicker it shifts. And this just gives the V2 incredible acceleration from corner to corner.

And though the 955cc engine may not have the face morphing power of the V4, but it is still a very fast bike. 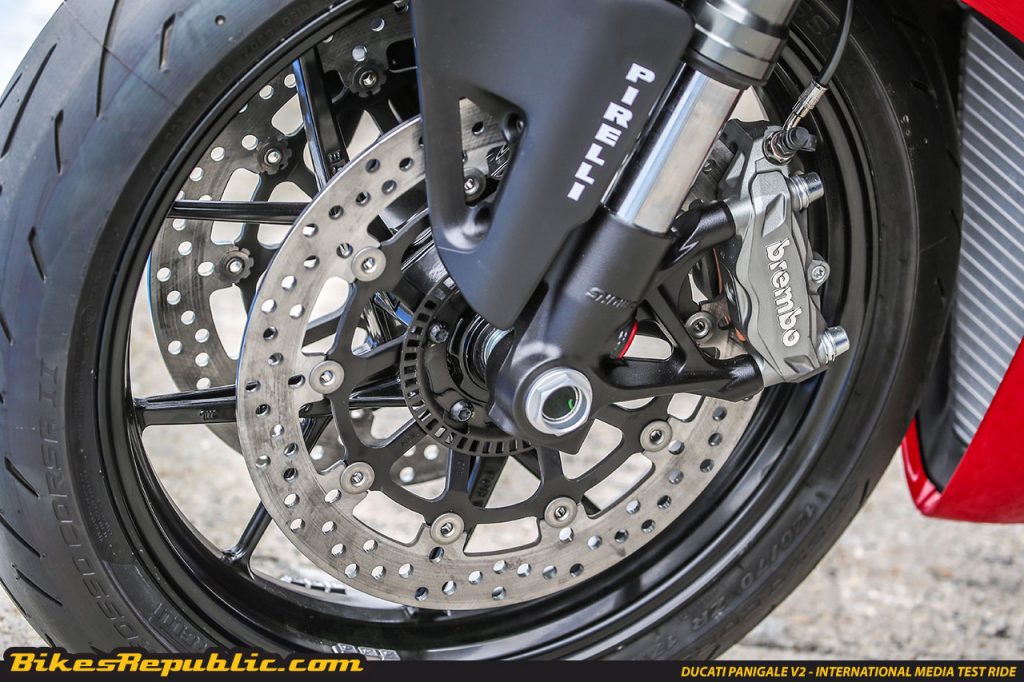 When it comes to shedding speed, all that speed is managed by twin M4.32 Brembo Monoblock calipers on 320mm discs which require just two-fingers to operate while the rear is kept in check by a 245mm disc. 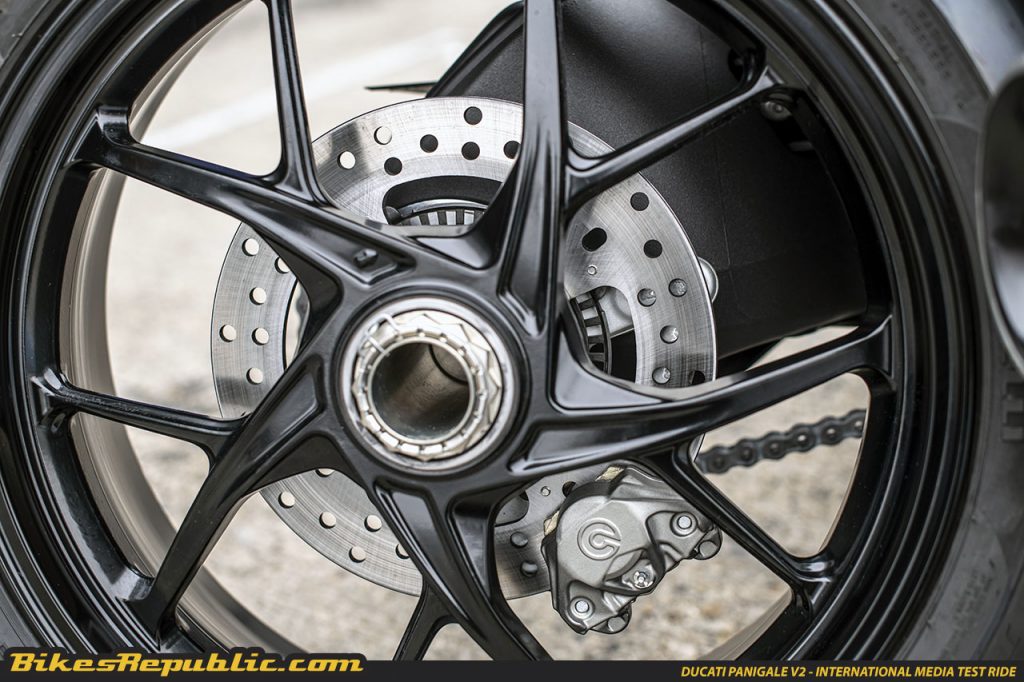 As you can probably imagine, this is enough stopping power here to sate the most aggressive of riders. The only threat to Malaysian riders though will be securing the callipers from theft.

To buy or not to buy!

In typical Malaysian manner – “buyyyy broooo, still need to ask meh? The price already so good, what you want some more. RM109,900 only mah! Cheap la!”

It is difficult to truly judge the depth of a bike with just a few laps, but these few laps are good enough to tell me that the baby-Panigale has matured to be a true superbike. 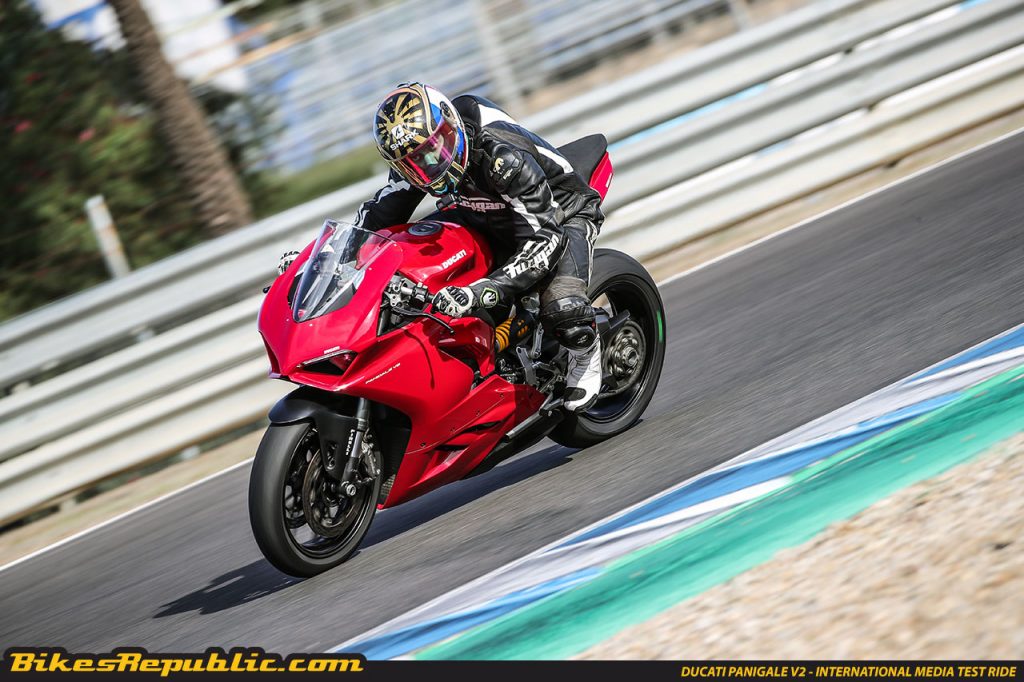 Hardcore trackies might miss the ballistic nature of the V4 and the depth of adjustability the Ohlins shocks offer, but the V2 is honestly a good enough bike for all your needs. The seat is wider and more comfortable which gives it added comfort for daily rides to the office and such. 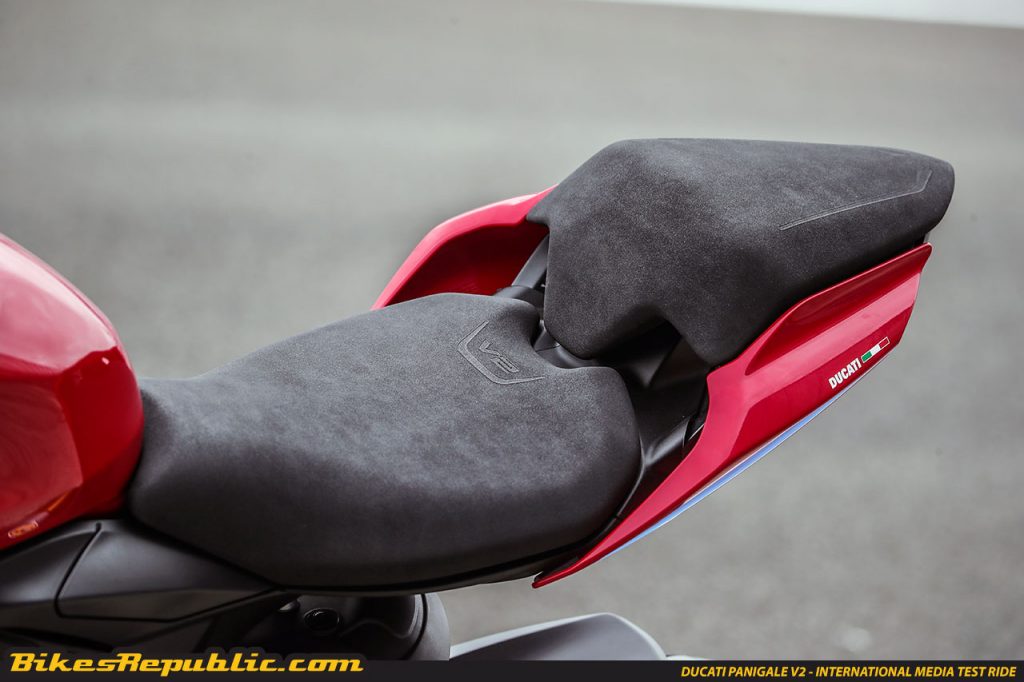 If you are looking for a bike that is easy to manage, won’t scare the crap out of you (well, at least not all the time) and will still look fantastic 10-20 years down the road – the Panigale V2 is the bike you want!

And now is the perfect time to buy the Panigale V2 as Ducati Malaysia has introduced its latest Ownership Enhancement Program – more info on it here!