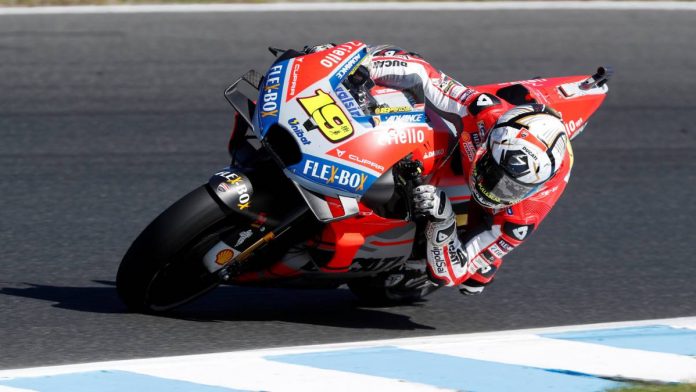 Alvaro Bautista probably had no idea of where he’d finish in Australia when he sat in for the injured Jorge Lorenzo.

The Desmosedici GP18 threw Jorge Lorenzo off on the last three occasions. The last one in Australia injured his left arm. But instead of letting only Andrea Dovizioso ride in the race, the Ducati factory team drafted Bautista over from the Ducati satellite Angel Nieto Team.

It wasn’t easy for the affable Spaniard at first, crashing three times over the weekend. However, he found his rhythm in the race and challenged both Andrea Ianone and teammate Andrea Dovizioso for the podium positions.

He only acquiesced the position when, “I had a problem with the gearbox. It was different to what I was using. I didn’t engage the gear and I lost the distance with both Andreas.”

This is where it starts to get interesting.

Speaking about his switch to the factory Ducati World Superbike squad next year, “I’m so confident for next season. I like to race but I also like to win. If you don’t have a competitive bike you can’t win.”

It was the ex-125cc World Champion’s best result in MotoGP since April.

Bautista’s interview confirmed that there are tiers in MotoGP.

Compared to factory machines such as those ridden by Dovizioso, Lorenzo, Marquez, Pedrosa, Rossi and Vinalez, the bikes run by satellite teams are “customer” bikes. Race teams – the “customers” – rent the bikes from manufacturers. These bikes are usually those with the previous year’s specs. Even then, they are not 100% identical to the factory bikes.

As such, the title had always come down the fight among the factory boys while other riders play the role of grid fillers.

This isn’t a good thing as so many great talents find themselves languishing on uncompetitive bikes down the field. While this happening, attention and more importantly, screen time is given to the top runners. How many times have we seen Hafizh Syahrin in action this season? Unless he crashed, notwithstanding.

The disparity between full-factory and satellite teams used to be very small in the 70’s and 80’s but it has grown larger ever since. It has closed somewhat in the last few seasons since the introduction of the spec-ECU and Michelin tyres in 2016. We witnessed Johann Zarco and Danilo Petrucci challenging for the lead on many occasions last year, but it was an all-out fight among the factory Honda, Ducati, Yamaha (and Suzuki to a lesser extent) again this season.

This is the exact reason why Herve Poncharal decided to move his Tech 3 camp to KTM next year. Being supplied sub-par bikes for past seasons had left him wishing for better results. But there’s no way out since Yamaha will not supply him the latest YZR-M1.

So, before some of you start spouting wild accusations like, “Mat Sallehs will only favour Mat Sallehs and push Hafizh Syahrin down because he’s Malay,” (oh yes, someone did post that in Facebook) remember Bautista’s result at Philip Island.