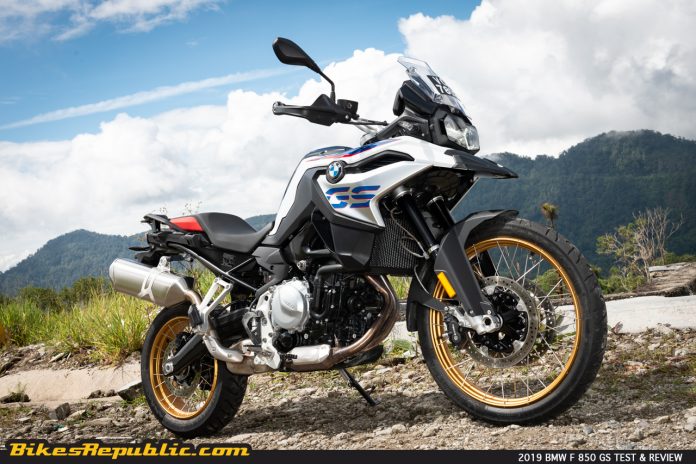 The 2019 BMW F 850 GS is finally available since its launch in October last year. 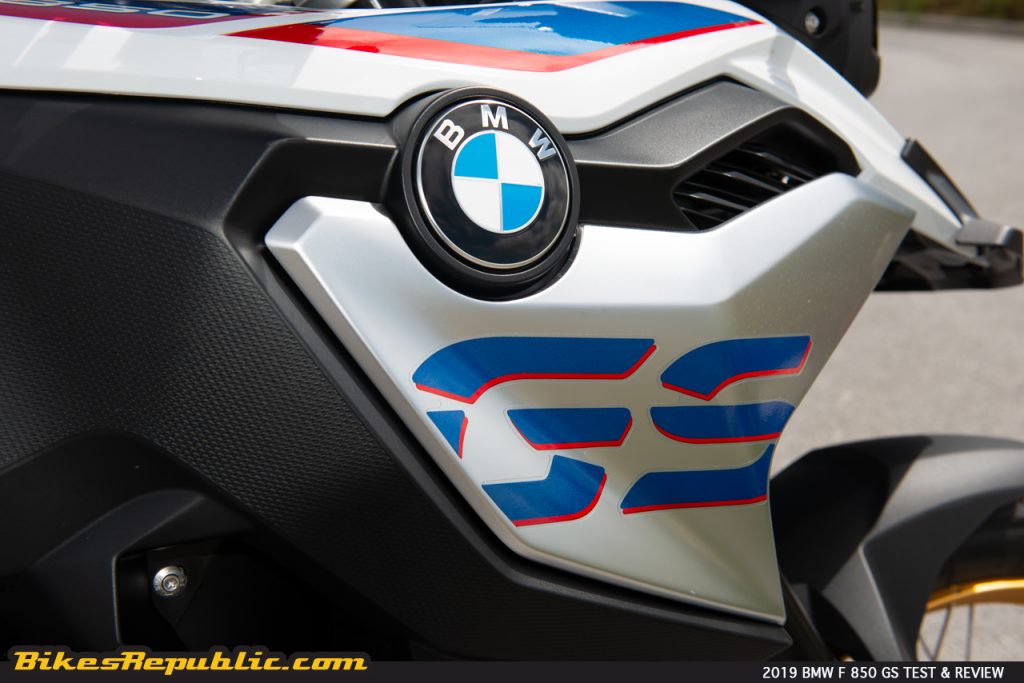 Of course, BMW Motorrad has to update the F 8XX GS line-up to where it is now. Its competitors, the Triumph’s excellent third-generation Tiger 800 line-up and KTM 790 Adventure have set the middleweight standard. 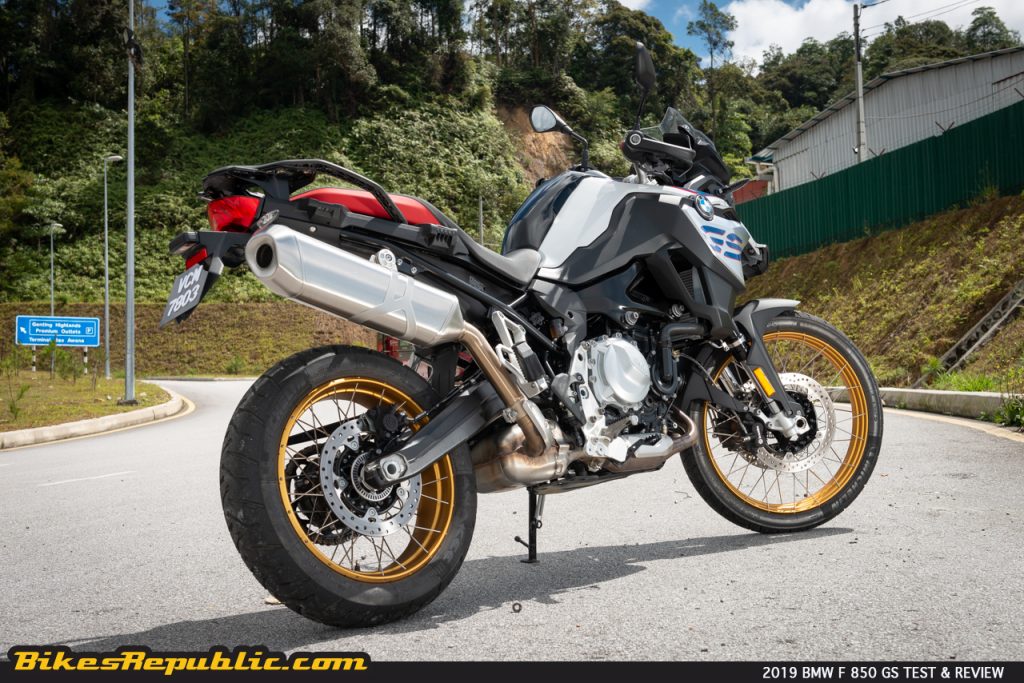 It would appear as if the F 850 GS and new R 1250 GS were designed side-by-side. It’s unmistakably a GS but also an 850. It’s a handsome bike to look at from any angle: The sharp front beak, asymmetric LED headlight, flowing body lines, terminating with an R 1200/R1250 GS taillamp. The spoked gold wheels also add to the entire appeal. 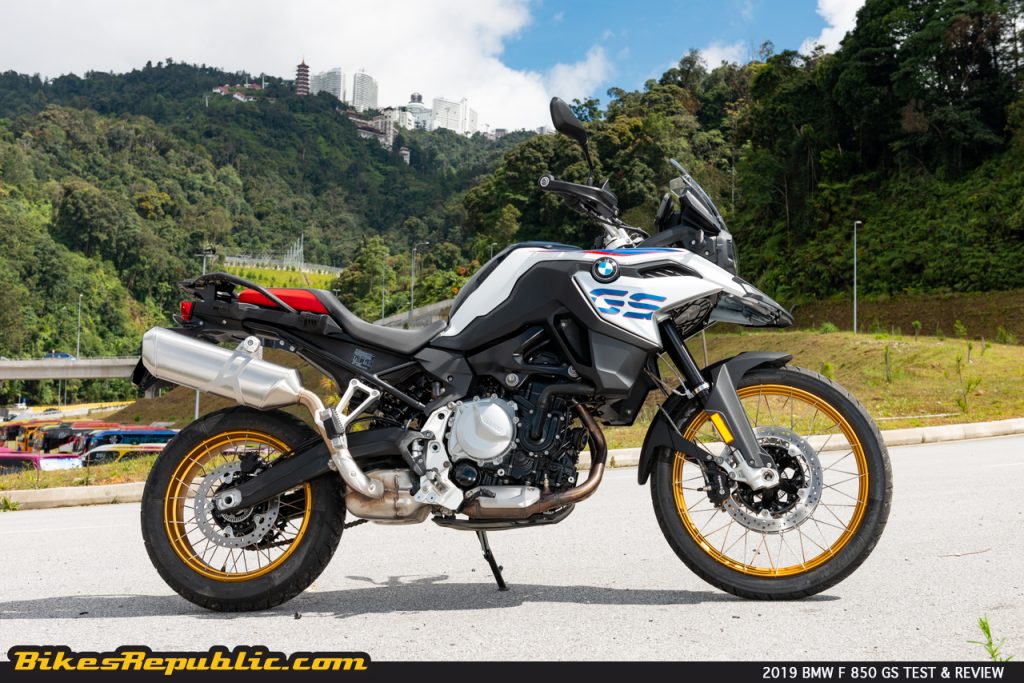 First up, the engine. The new 853cc parallel-Twin has a new firing order, eschewing the old 360o crank (both pistons rise and fall simultaneously). Instead, the new crank has a 270o offset to mimic a 90o V-Twin. It results in a smoother torque curve and reduced vibrations. 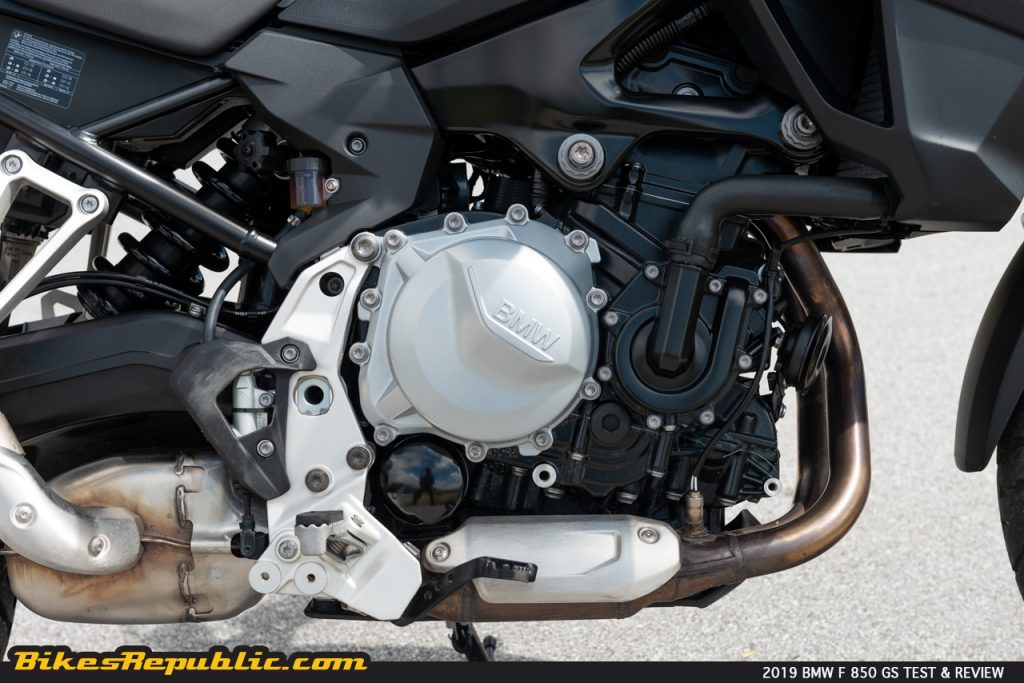 Besides that, the transmission now features a slipper clutch, and the final drive is on the left side.

Along with a new frame, the fuel tank is now in its traditional placement in front of the rider. Doing so results in a more balanced 49/51 front/rear weight distribution. There’s a new frame for the new bike, too, consisting of deep-drawn and welded components. 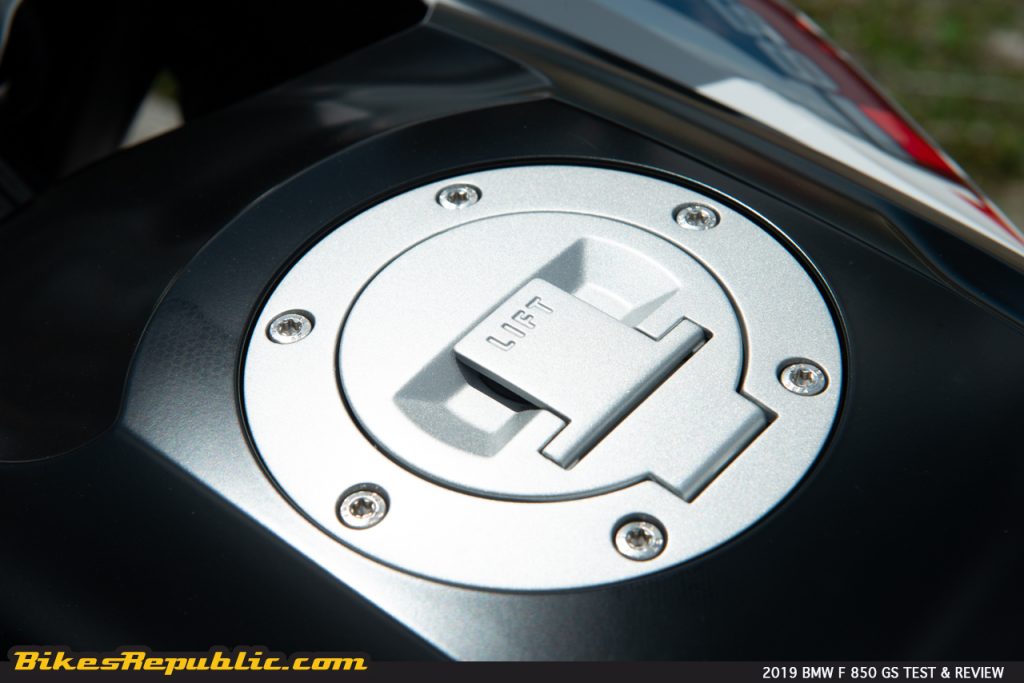 The front forks are new but non-adjustable, while the new rear monoshock is adjustable for preload and rebound damping.

Facing us was the new multifunction TFT screen. The main “page” showed data such as revs, speed and gear position, but you need to scroll to other pages for the fuel level and range. One needs time to accustom himself of flipping through the menus. It requires multiple presses on the MENU button and multi controller. However, there’s so much information in there for you to play with at the traffic lights (and impressing other motorcyclists). 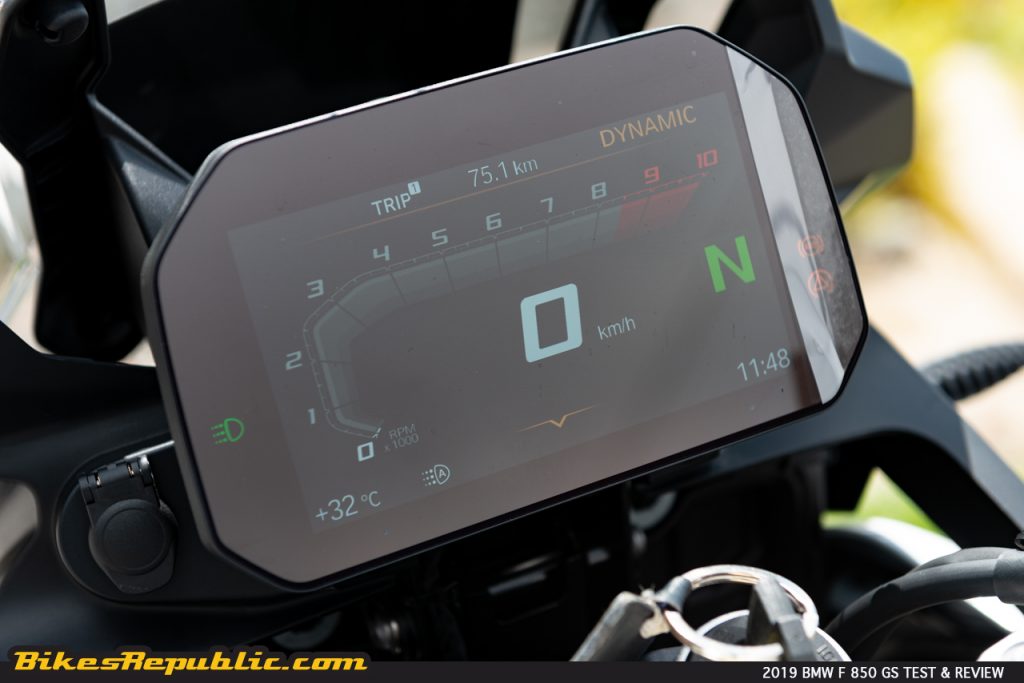 This particular unit was fitted with the low seat option, allowing our feet to reach the ground easily.

The seating position was predictably straight up, with the handlebars rising high and back to meet our hands. Yet, the handlebar’s width was just nice without being too wide, so we didn’t feel like we’re trying to hug a tree. 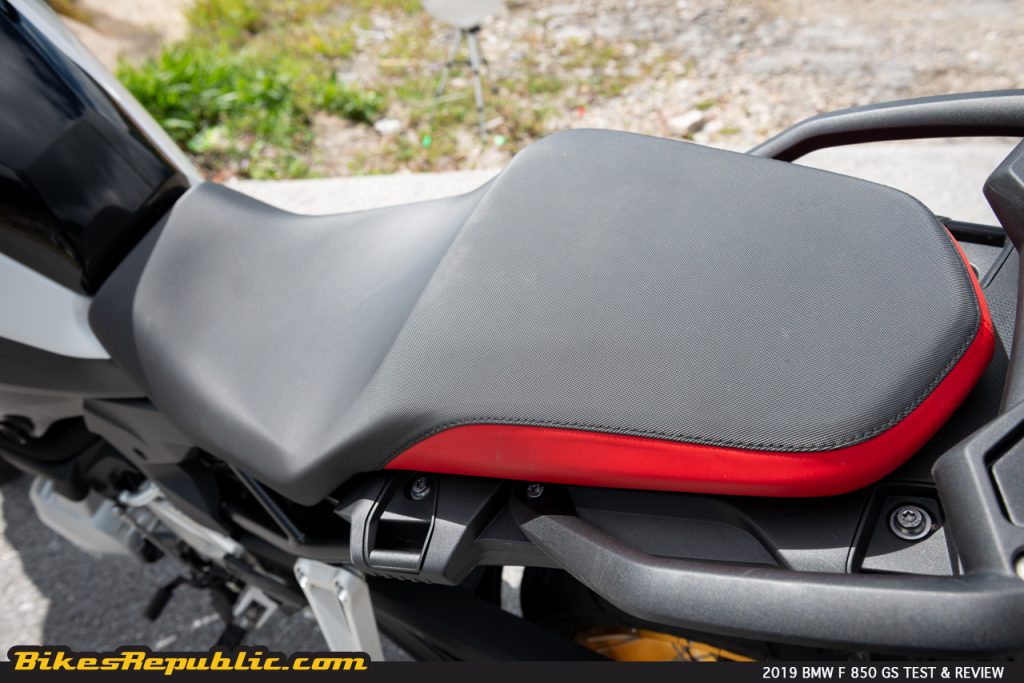 There were four ride modes: DYNAMIC, ROAD, RAIN, ENDURO while ENDURO PRO was a greyed-out option. We preferred to ride in DYNAMIC as it was akin to SPORT mode.

However, the throttle felt soft and a little detached regardless of mode we chose, as if the throttle cable had a little bit too much slack. And hence why we rode in DYNAMIC. 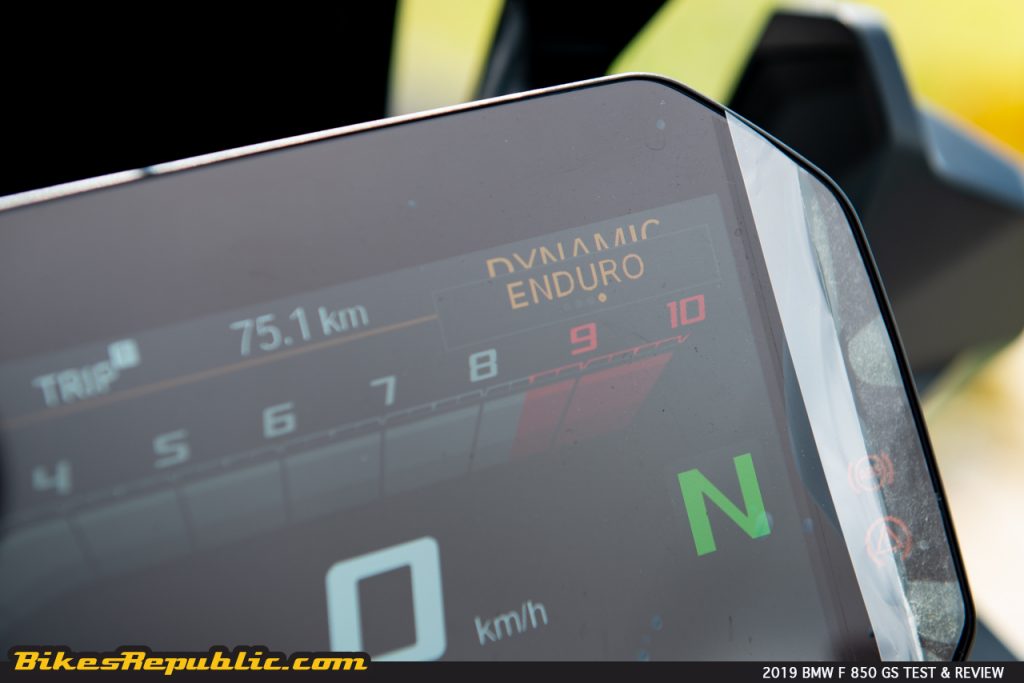 Don’t be fooled, nevertheless! This new engine is a potent one and will jump forward like an R 1200 GS if you twist the throttle like it’s a bottle cap. The bike will blast through the revs and gears all the way past 200 km/h (bye-bye Honda Accord driver who wanted to “test power”). The new wide transmission ratios made it really easy to cruise at 150 to 160 km/h all day. 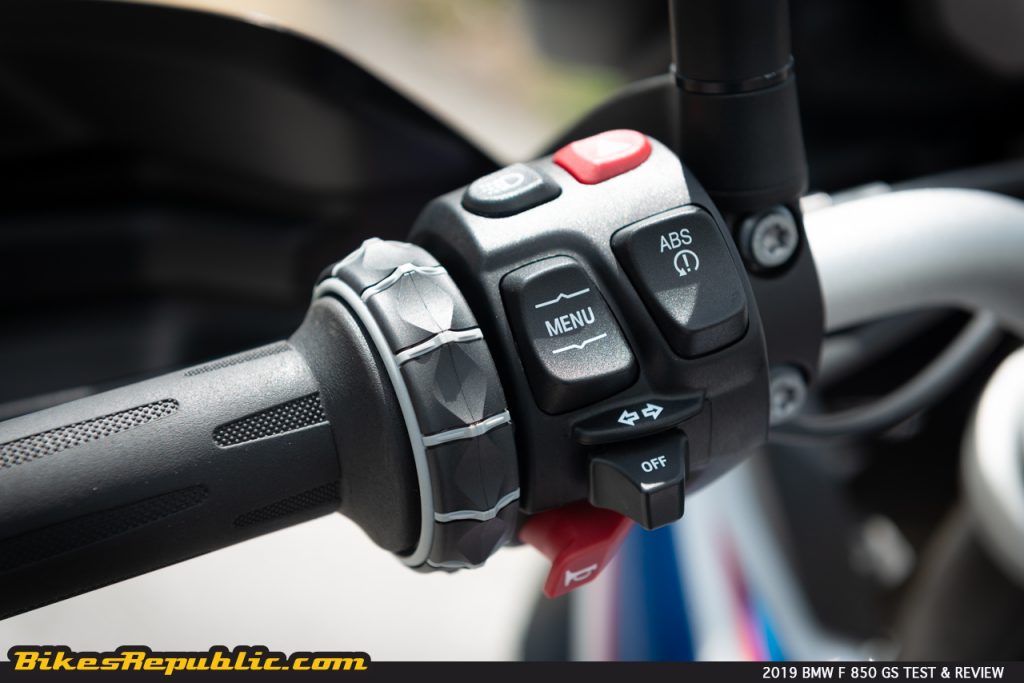 The suspension was a bit of a revelation, too. It felt too soft therefore with not much feedback. Coupled with the low seat (it put our weight over the rear wheel), it needed more effort in getting the bike turned. However, that softness paid back in spades when the bike hooked up in mid-corner as the centrifugal forces pushed the bike’s weight down into the stiffer part of the suspension’s stroke.

We’ve hammered the bike through corners between 160 to 180 km/h (got the videos to prove it). 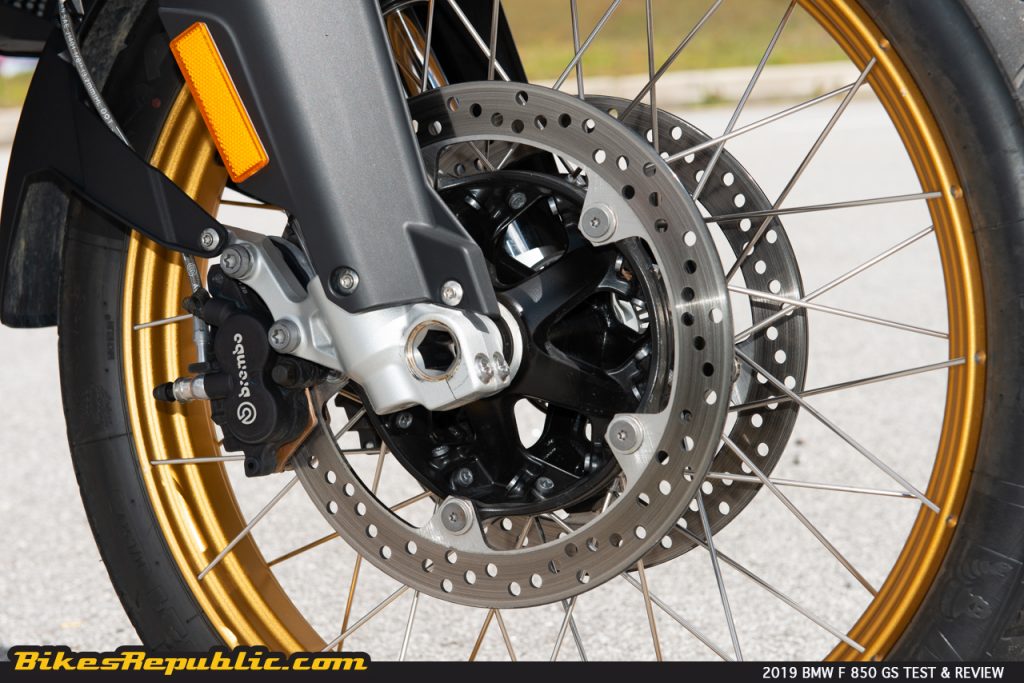 On the other hand, the suspension never bottomed out. The rear shock pogo’d a little before rebound damping adjustment but it’s acceptable.

But the F 850 GS was an easy bike to learn. We were soon snapping it over and utilizing the extra rolling speed due to the slipper clutch. The soft suspension totally absorbed every bump on the road and held the bike on the chosen line. The lack of feedback was scary at first, but we learned to trust the Michelin Anarkee tyres and took them to their edges (and the footpeg feelers). 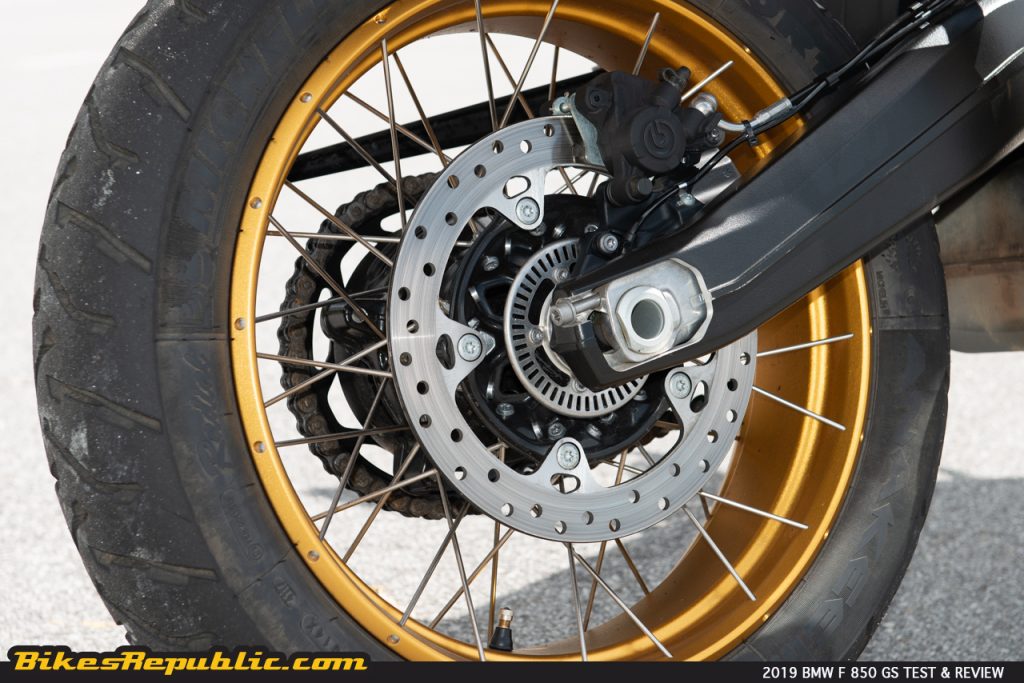 Still, we wished for some adjustability for the front forks, especially in terms of compression damping to add more “feel” when riding on the road. A lack of feedback on wet roads caused a concern if the tyres were to suddenly break traction. Also, the forks dived a lot under braking.

In the end, we found that the F 850 GS is geared more towards adventure-touring although it preformed its sport-touring role well. That kind of suspension action is like what you find on enduro bikes, and we know most riders won’t mind it. Plus, the low, non-adjustable windscreen is a giveaway to the bike’s off-road intentions. 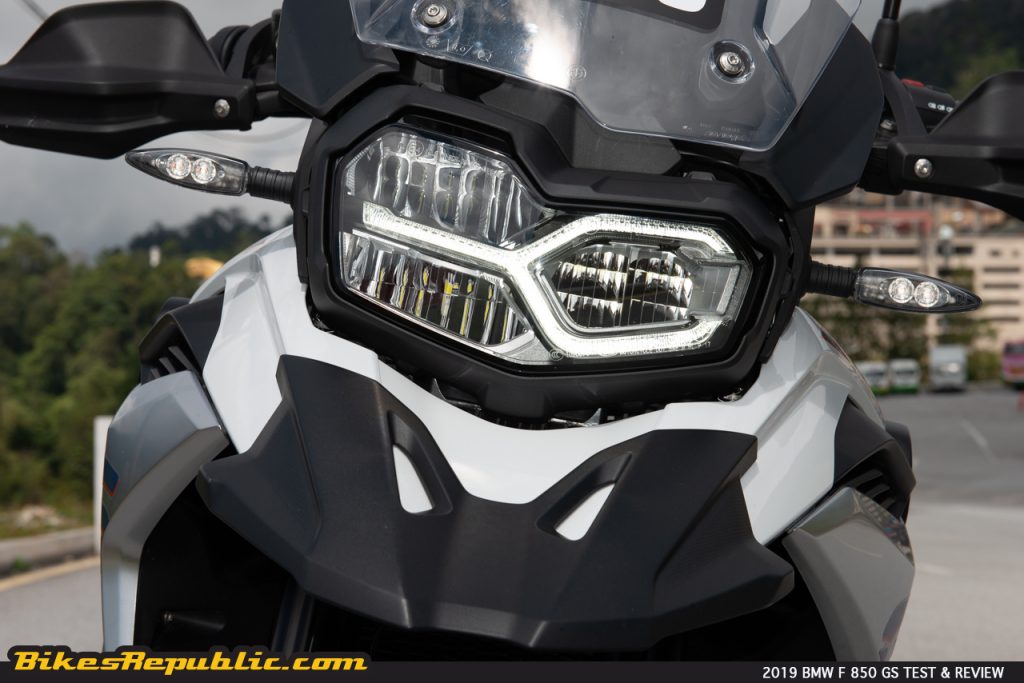 As such, it took on an entirely different character in the dirt. The soft initial throttle response allowed us to manipulate our speed with more sensitivity and predictability. The long-travel suspension soaked up bumps very well even while we sat down.

The 2019 BMW F 850 GS is a great step forward for the model. It’s now more “modern,” faster and comfortable, hence easier to live with. Besides the off-road capabilities, it’s also now more practical for long-distance touring.

The F 850 GS offers something accessible for a wider range of riders, who want something more affordable, lighter and smaller than the R 1250 GS. Indeed, the F 850 GS may be more capable than its bigger brother in many ways.