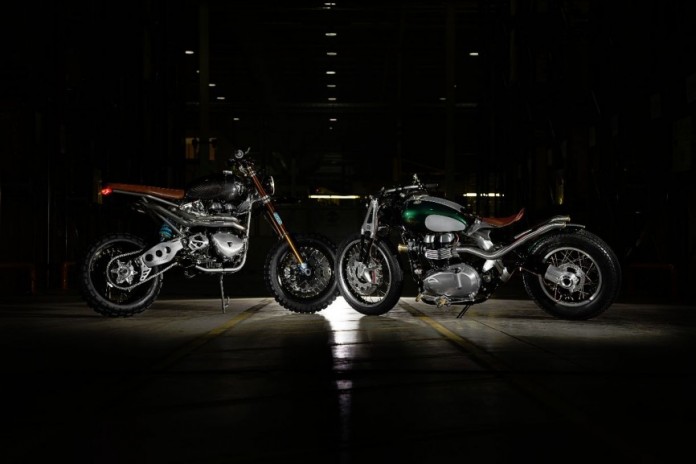 The format of pitting two teams against each other in a “build-off” has been around for many years – and always results in some fantastic motorcycles. When those two teams are comprised volunteers from within the Triumph business, tasked with creating the ultimate Bonneville customs then the sparks will truly fly. 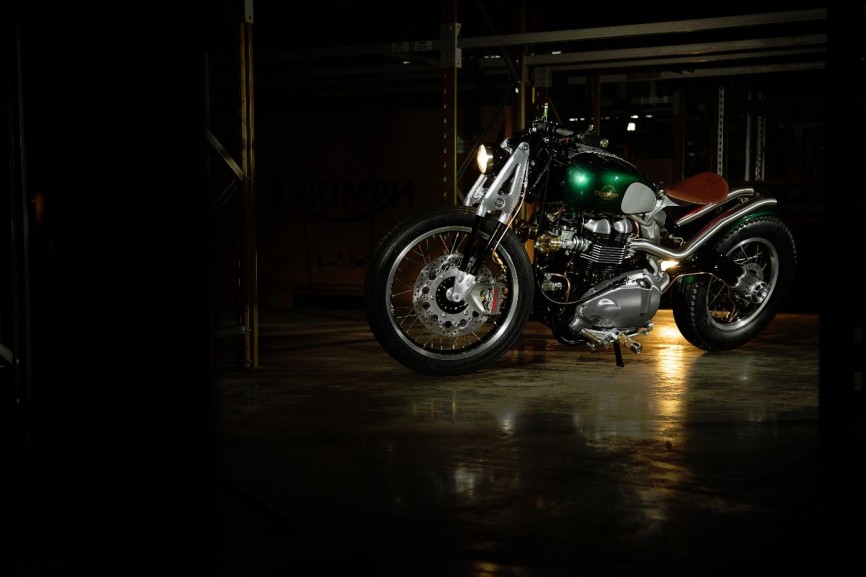 In May 2014 volunteers were invited to join two teams in a build off to celebrate the iconic Bonneville. With the Bonneville chosen by many of the top contemporary custom builders and the base for countless specials around the world, the challenge was clear – use our in-house talent, craftsmanship, skills and passion to create a pair of jaw-dropping custom Bonnevilles. Each team was given a brand new Bonneville as a base to bring their dreams alive with a deadline to unveil both bikes in Milan on the 4th November 2014. Each bike would be showcased on the Triumph website and the winner will be the team who earns the most shares across Facebook, to be announce at Motorcycle Live, Birmingham, on the 26th November 2014.

Welcome to the new Triumph Factory Custom build-off. Welcome to Bobber vs. Scrambler. 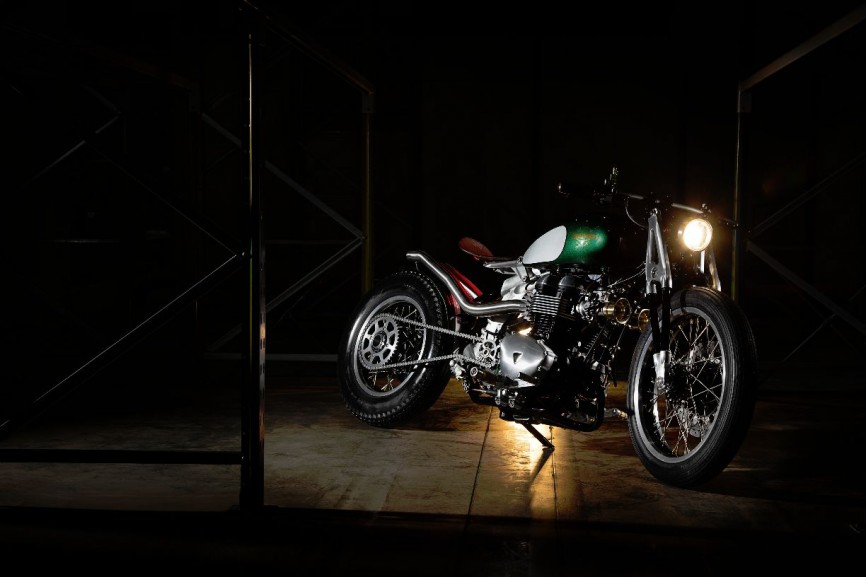 The Bobber. Instantly the name invokes images of clean lines, minimal equipment and a stripped-back riding experience. For Team TFC1, a group who count three Bonneville customs and a chopped V8 pickup amongst their own personal vehicles, this was definitely the route they wanted to follow. However, a traditional Bobber wouldn’t cut it for these passionate enthusiasts. The team’s desire was to take the Bobber ethos and really push the boundaries.A twin tubular hardtail frame with a single-sided rear end. A contemporary girder front end running twin Fox Factory shocks with remote handlebar adjustment. A reverse cylinder engine with completely reworked internals. Just three examples of the incredible engineering that the team have integrated into the showstopping TFC1: The Bobber. 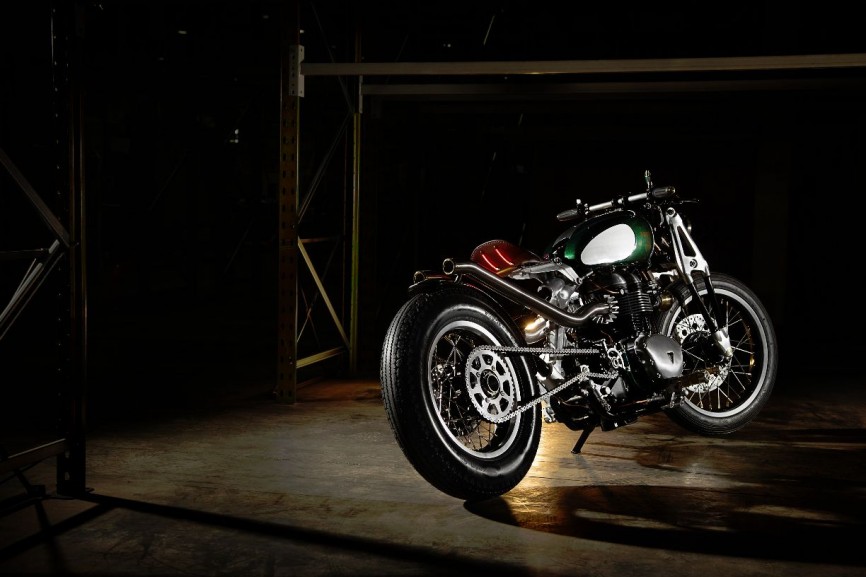 With a low, sinuous stance, The Bobber is simply too much to take in at first glance. Completely redesigned girder forks, eliminating all of the traditional poor handling and lack of damping issues associated with this design,  four pot caliper and wire wheel combine a complete hybrid of modern design and classic style. The startling single-sided hardtail rear is an engineering marvel in its own right, and the reverse cylinder engine presents the bespoke bell mouths to the rush of oncoming air and allows the elegantly simple exhaust to snake out and create the rear lines.

Stepping closer brings even more detail to drink in. The bonding of the frame elements, using a bespoke adhesive created by partners ThreeBond, gives a clean, weld free finish with incredible beauty yet unparalleled function. The traditional solo seat that utilises a purpose-built Fox shock absorber and linkage, allowing the rider to adjust comfort at the flick of a lever. The minimal lines of the Radianz LED light incorporated into the seat pan are just another example of the team’s perfect attention to detail. 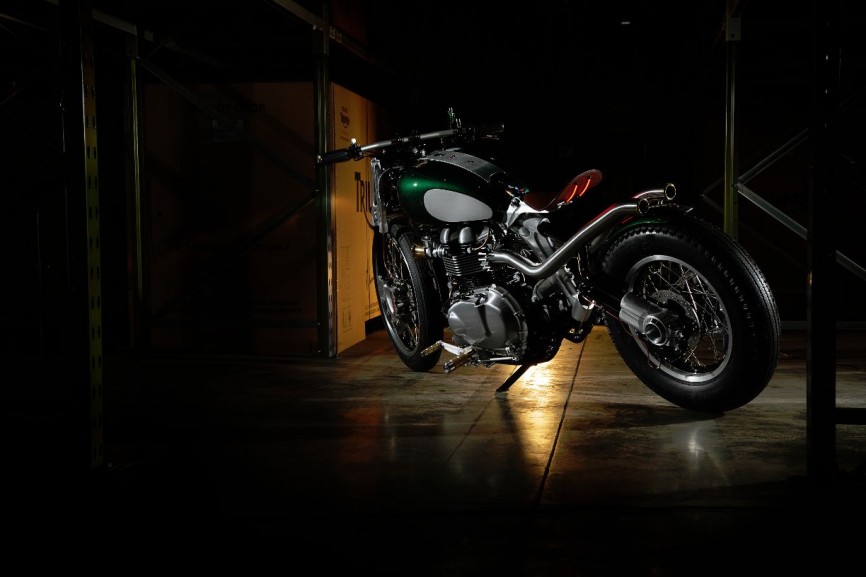 Nowhere is the obsessive attention to detail more apparent than in the final details that you don’t see. A challenge of customising any contemporary motorcycle is the numerous electronics, sensors and looms that need to be integrated into the build. The Bobber is no different, and presented a number of challenges to the team. The initial thought of abandoning the stock EFi system and reverting to flat slide carburettors seemed at odds with the desire to build the ultimate contemporary Bonneville, so the team developed a plan to incorporate all of the modern electronics. Key to the plan was a ’69 Bonnie US Export tank. The tank was split in two, with one half being used for the electrical components and the other being used for fuel.  Start and kill buttons were added to the dummy half, which now contained a shortened loom and bespoke electronics board, along with a Motogadget speedo.  A Motogadget keyless ignition also handles the starting requirements. The other side of the tank houses the fuel, the fuel injection pump and filters and is finished with a pop up fuel cap.

Also out of sight – within the striking reverse cylinder engine – are hours and hours of re-engineering, modifiying the repositioned cam chain tensioners and oil ports, rerouting oil ways, and modified cam timing for the contra-rotating camshafts. Even the exhausts have been subject to this attention, with the twin wall construction allowing them to maintain the brushed finish without discolouring due to temperature. Countless other details combine with these incredible engineered elements to create TFC1: The Bobber – a Bonneville that echoes Triumph heritage whilst providing a breath-taking showcase for our contemporary custom excellence. 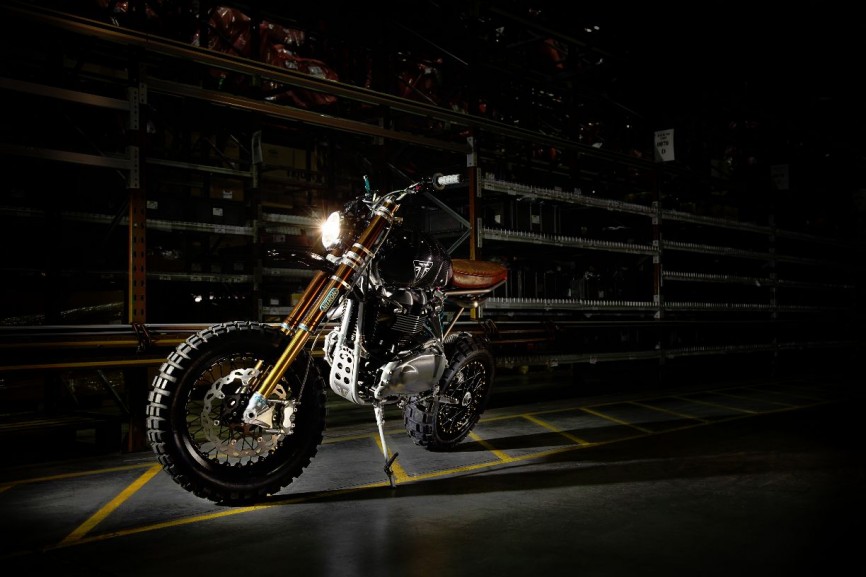 As the custom scene continues to expand globally, so do the vast variety of custom Scrambler-style bikes. The original Scramblers were designed as purposeful, powerful, aggressive off-road versions of a stock road bike. Desert Sleds, Flat Trackers and Scramblers all fed into the DNA of what defines a true Scrambler. And this was the code clearly adopted by Team TFC2. Their interpretation of the  Scrambler would become the modern expression of this desire for performance, handling and off-road ability – THE Scrambler.

Straight out of the crate and before their donor Bonneville had even reached the build bench the team defined a design ethos based on take mass out and boost power as their recipe for success. This approach was to be coupled with geometry and suspension travel closely related to a modern competition moto-crosser to deliver an agile chassis that would provide a perfect match for the uprated power plant. First to receive attention was the existing steel frame – sacrificed in exchange for a bespoke aluminium and titanium chassis with aggressive geometry and purposeful stance. The aluminium frame also acts as a conduit to hide components such as the throttle linkage and cables. Coupled to the aluminium frame is an exquisite titanium sub-frame, hand-welded in-house before being finished with shot blast and masked welds. 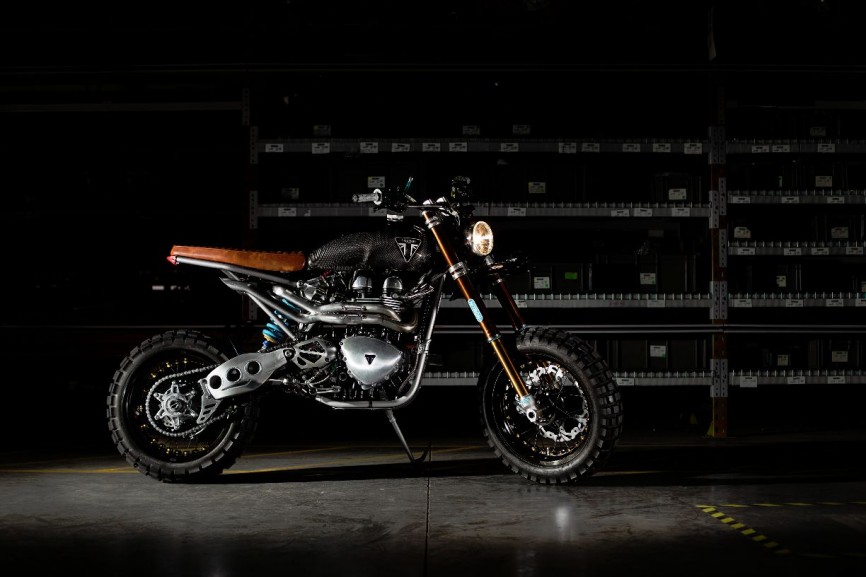 The beautiful bare chassis is finished with a slight departure from the lightweight obsession. The repurposed Speed Triple swingarm is heavier than a conventional unit, but has been inverted and finished to perfection to provide another staggering detail and a clear visual Triumph cue. Incorporating the swingarm created the need for a monoshock conversion, bringing the bike closer to its modern motocross inspiration and a collaboration with Nitron Racing Systems delivered a perfectly tuned rear shock along with a bespoke set of front forks.

The Scrambler’s elegantly aggressive poise is further enhanced by the unique composite bodywork. Very early in the process the team proposed the possibility of a carbon fuel tank – but weren’t convinced of the feasibility of the idea. Ace Fibreglass and Carbon stepped in, working with the team to produce a full carbon tank, along with additional bodywork and battery tray. The tank itself weighs in at under a third of the original steel part, contributing significantly to the team’s mantra – lose weight, boost power.

With The Scrambler now weighing in at significantly less than the donor bike, the team turned their attention to the second part of their intent – boost power. The head was skimmed and ported prior to the addition of large valves and Daytona throttle bodies, teamed with a modified set of spun aluminium inlet trumpets. Still seeking more from their modified twin the team engineered a one-off set of high lift cams, with a Daytona profile. Overall the engine mods are predicted to give a 25% increase in overall power –bringing the bike to life and giving the drive to match the new chassis.

To ensure the drive gets to the dirt, The Scrambler is finished with 17 inch Kineo wheels shod with a 180 section rear and 130 section front tyre. Why 17 inch front wheels? Well the team figured the option to fit a pair of super sticky slicks would turn the ultimate Scrambler into an outrageous Supermoto style track tool – which is no bad thing.