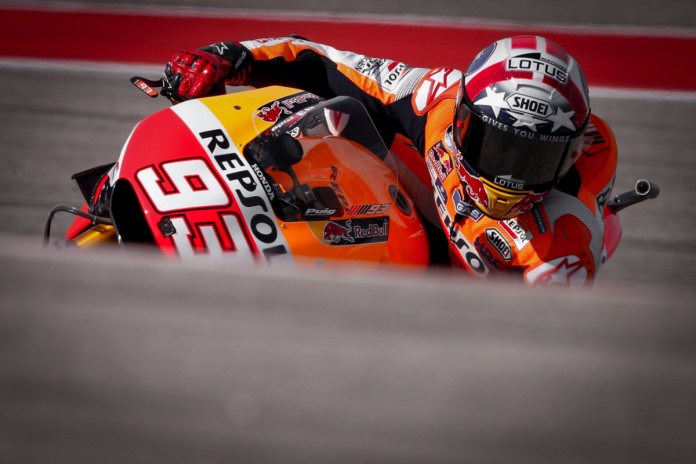 Marc Marquez dominates MotoGP race in Austin, Texas for fourth time in a row and extends lead in championship standings.

Repsol Honda rider Marc Marquez can call Austin, Texas truly a place of his own after the Spaniard recorded his fourth straight pole and fourth straight win at the Circuit of the Americas in the premier MotoGP class, maintaining his 100% record at the course in the process.

Marquez’ dominance throughout free practice led to his dominance during qualifying where snatched pole position with a blistering time of 2:03.188. Alongside him on the front row were the two Movistar Yamaha Factory Racing duo of Jorge Lorenzo in second and Valentino Rossi in third.

As the lights went out on Sunday, Marquez had to fend of the advances of the two Yamahas coming into turn 1, but it wouldn’t take the former world champion long before he could edge past reigning champion Lorenzo and press forward to create a significant gap.

Whilst ahead, Marquez was unaware of the drama that ensued behind that included the rare sight of Valentino Rossi falling and retiring from the race – Rossi’s first race retirement in 25 races. Joining Rossi in the retirement list was Marquez’ teammate Dani Pedrosa and factory Ducati rider Andrea Dovizioso after the two collided into each other.

Marquez eventually took victory with a scarcely believable gap of 6.107 seconds ahead of Jorge Lorenzo who finished second, and 10.947 seconds ahead of third-place finisher Andrea Iannone. Factory Ducati rider Iannone’s podium finish was a well-deserved achievement after serving his penalty grid place demotion, making it his first race finish of the season too.

Marquez leaves Austin, Texas with a total of 66 points to lead the standings, having amassed a significant gap ahead of reigning world champion Lorenzo in second with 45 points whilst Rossi remains in third with his score of 33 points so far.

Malaysian rider Hafizh Syahrin had a difficult outing in Austin as he could only manage to pilot his Petronas Raceline Malaysia Kalex machine to qualify in 17th on Saturday and just missed out on scoring points after classifying 16th as the chequered flag waved on Sunday.

Lowes now leads the Moto2 class standing with his score of 47 points whilst previous leader Thomas Luthi drops down to order to fourth. It is worth noting that the top four riders in the standings – Lowes, Rins, Zarco and Luthi – are within four points of each other. Suffice to say, the title fight for the Moto2 class this year looks set to be one of its closest to date.

Whilst previous race winner Khairul Idham Pawi struggled to master Austin, fellow rookie compatriot Adam Norrodin again showed his prowess after qualifying sixth on Saturday and was fighting in the top 10 during Sunday’s race. However, the Drive M7 SIC Racing Team rider’s run on Sunday came to an early end after Honda Team Asia rider Hiroki Ono collided into his bike from the rear, forcing the Malaysian rookie to retire after just 1 lap.

Round 4 – Jerez, Spain
The 2016 MotoGP season resumes in just a fortnight’s time with the grid kick-starting its European leg in Jerez, Spain from April 22 to April 24. Broadcasts times on Sunday begins with Moto3 at 5pm*, followed by Moto2 at 6:20pm* and the MotoGP main event at 8:00pm*. (*Local Malaysian time)