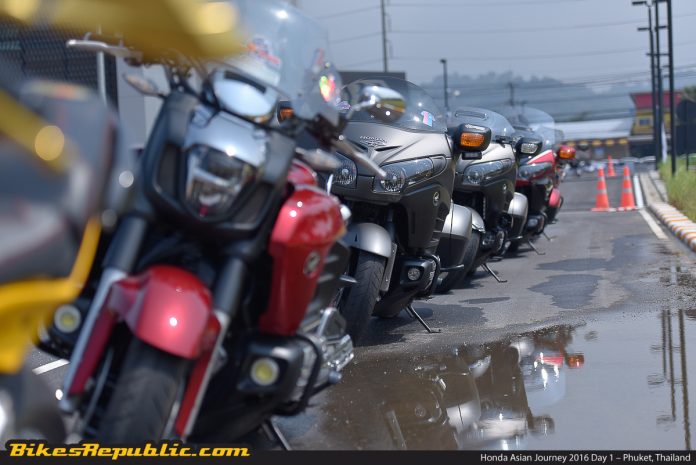 Highlights from Day 1 of the Honda Asian Journey 2016 enroute to the 2016 Shell Malaysian MotoGP. 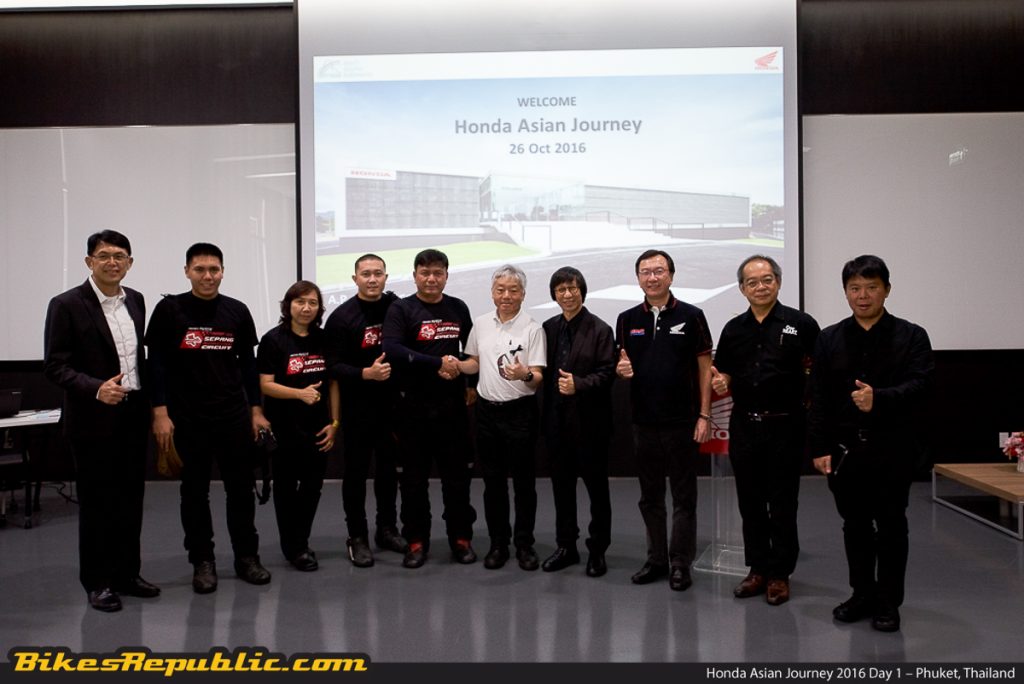 As part of a massive regional effort at strengthening its brand presence, Honda kicked off its Honda Asian Journey 2016 program today in Thailand, with the 2016 Shell Malaysian MotoGP race weekend being its destination.

This is the first time that Honda has organised such a program in the region, aiming to inspire its very own big bikes touring culture through it. Closer to home, local Honda bikes assemblers and distributors Boon Siew Honda Sdn Bhd have much bigger plans. 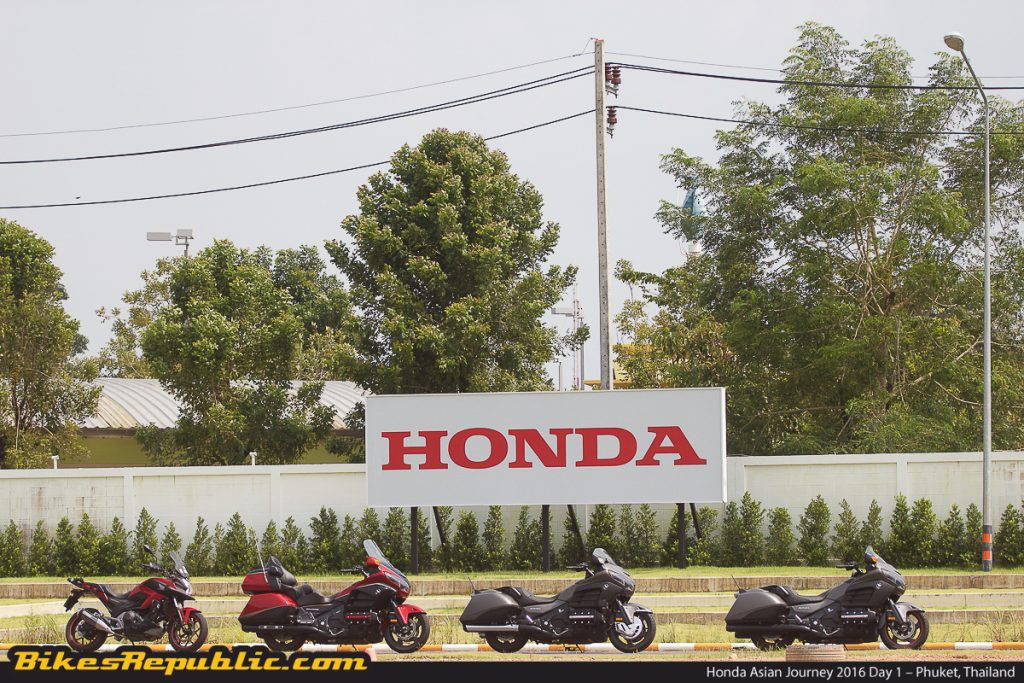 The Penang-based firm is using the Honda Asian Journey 2016 program as a platform to properly introduce the Honda big bikes line up and culture into the Malaysian market. At the same time, the firm aims to create a new brand image through said products.

Boon Siew Honda’s key goal here is to create a new perception amongst local consumers that the mighty Japanese red wing marque stands for more than just commuters like the legendary Cub series and EX5 dream. 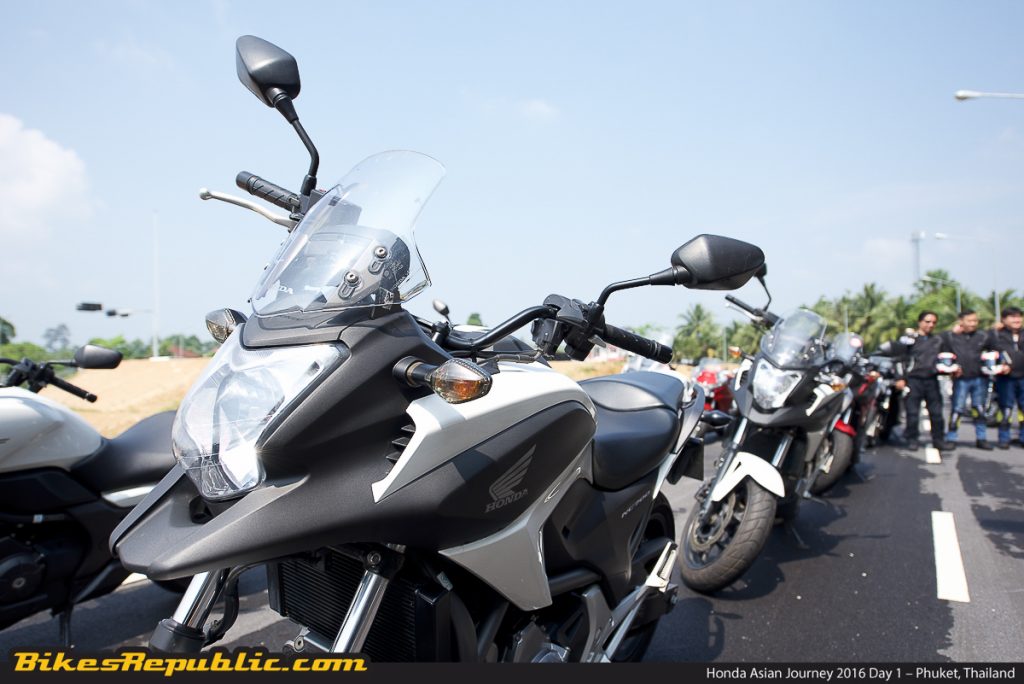 With that in mind, it is easy to see why Thailand was chosen as the starting point for this special regional program – the kingdom’s market is where Honda’s big bikes are thriving healthily in terms of sales volume and market share.

We’ve been invited to tag along on this epic Honda ride to this year’s Malaysian MotoGP race weekend and here’s how our first day went. 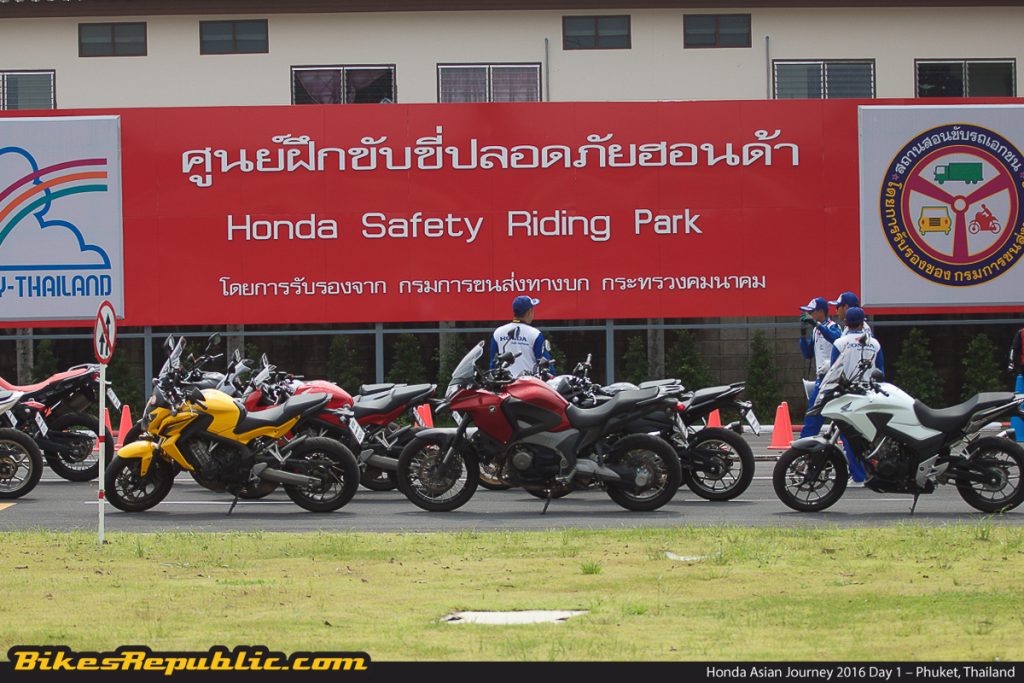 Day 1 – Honda Safety Riding Park, Phuket
Our first day starts in the tourist haven of Phuket where a safety riding course was held in the Honda Safety Riding Park. The purpose-built facility is one of many that AP Honda Thailand has set up all over the kingdom, proving to be one of the essential pillars in its big bikes segment’s success here too. 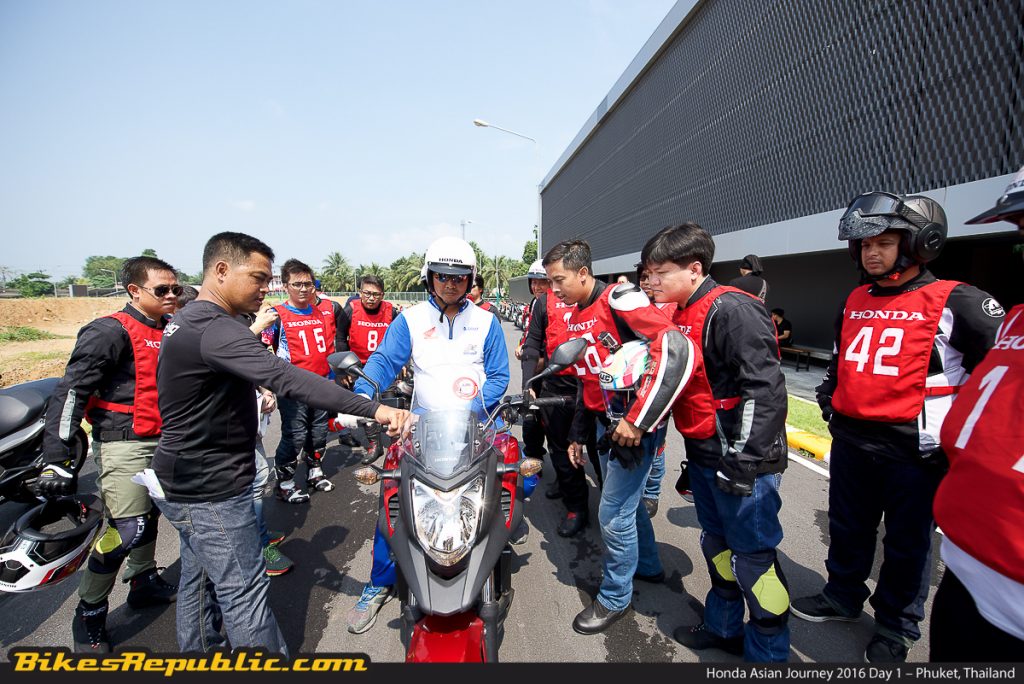 This is one massive cross-border group ride, and Honda isn’t taking any chances when it comes to safety. The park was built specifically to conduct such trainings and, interestingly, it also conveniently serves as a riding school where local Thais go to complete their license tests. 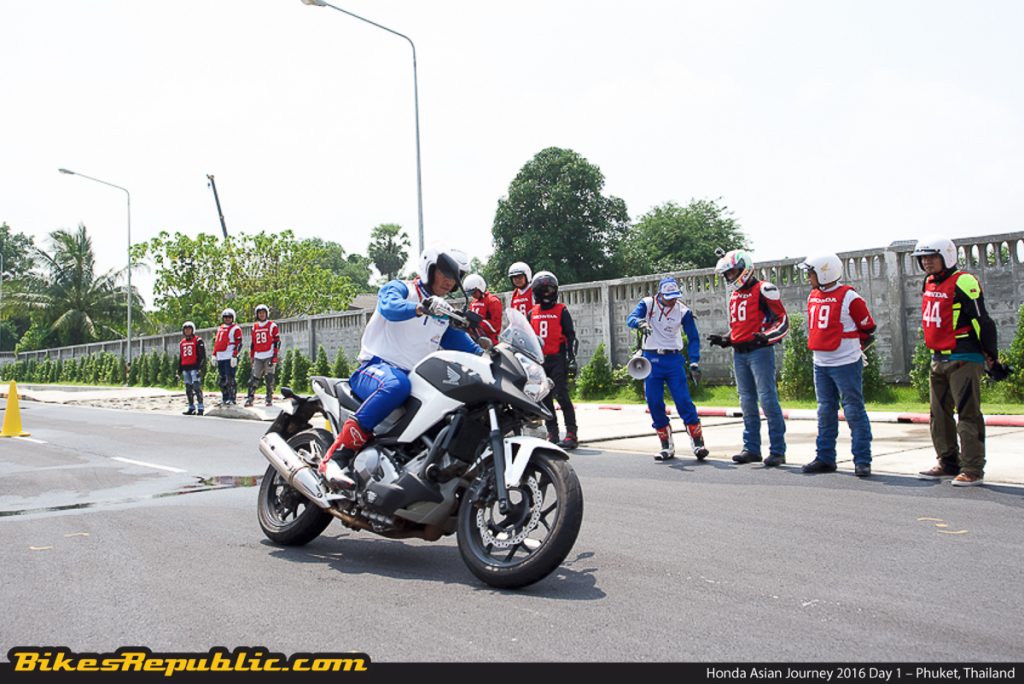 The course held today featured a rich array of Honda’s big bike models covering a multitude of genres including touring, adventure, naked and sport. The line up of instructors fielded were equally impressive as many participants – us included – learnt a great deal from them despite the apparent language barriers. 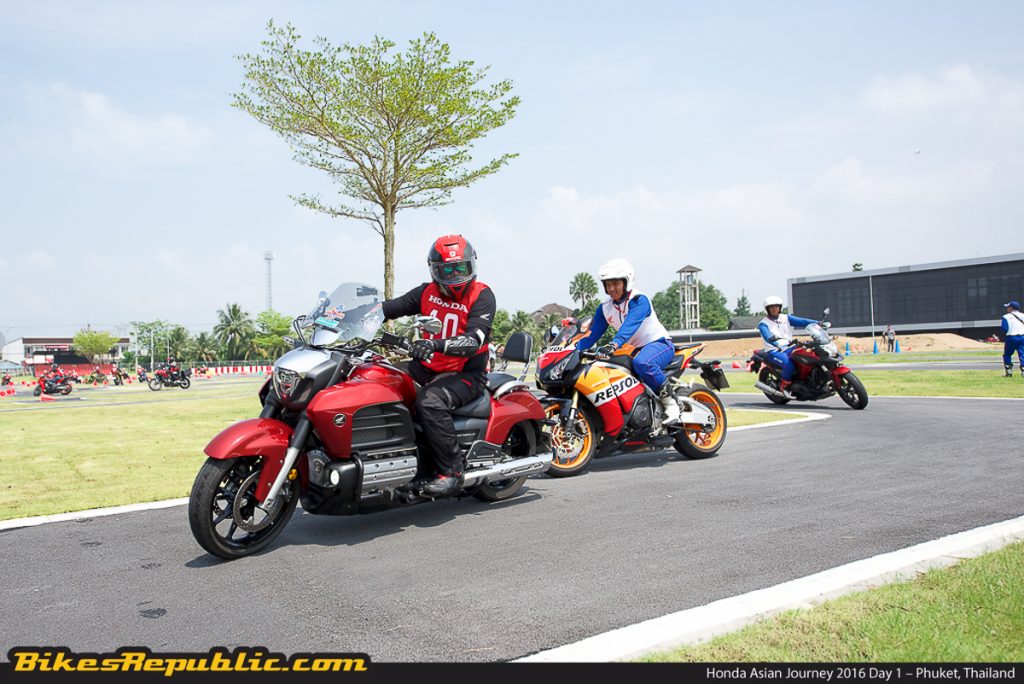 All in all, the day’s activities was a great refresher for experienced riders and gave others the chance to sharpen their riding abilities even further. One thing’s for certain is that AP Honda Thailand has proven that success in selling big bikes also comes from external efforts beyond the showroom floor, the Safety Riding Park being one of which. 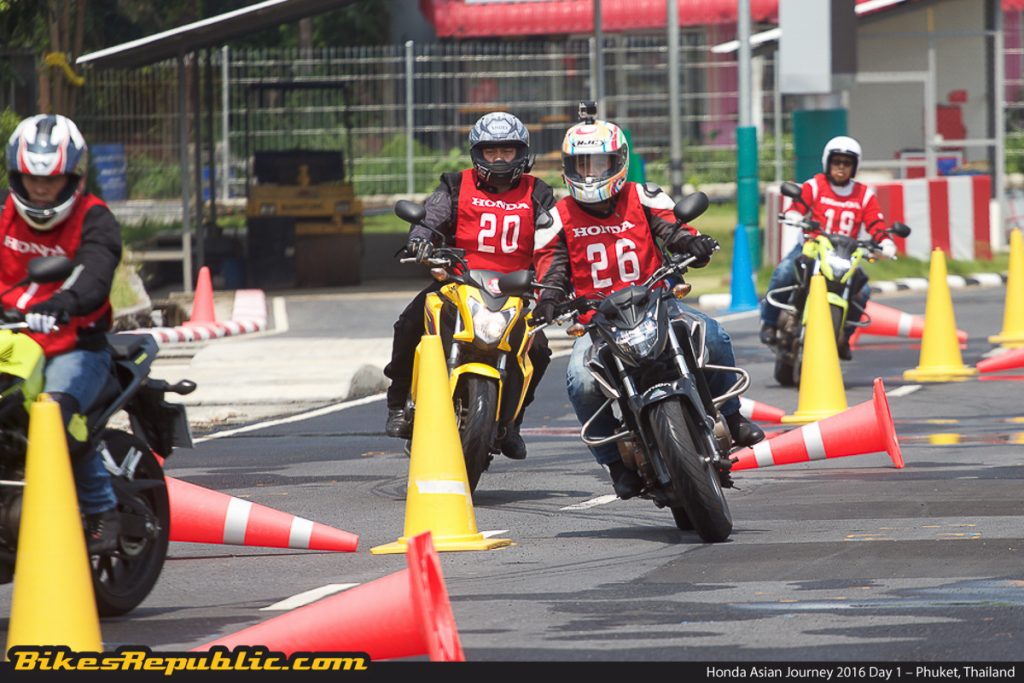 Day 2 – Hat Yai, Sadao and Penang
The next phase of the Honda Asian Journey 2016 kicks off tomorrow with a cross-border group ride towards Penang, Malaysia via Hat Yai and the Sadao border.

Stay tuned for our next travel log as we rake up the miles towards reaching the 2016 Shell Malaysian MotoGP weekend with Honda. Check out more pictures in the gallery we’ve prepared below.