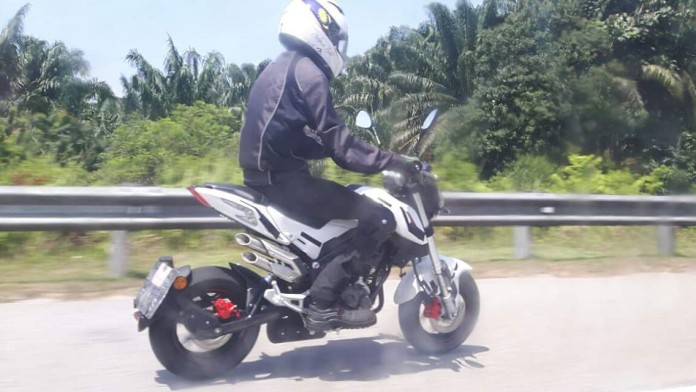 Now here’s another scoop from our sister site MotoMalaya.net. This image submitted to MotoMalaya.net by reader Tengku Suhighme shows us what we believe to be the Benelli TNT Naked T-135.

The bike was recently spotted undergoing road tests along the PLUS Highway network. Its sighting here indicates the possibility of local assembler and distributors Benelli-Keeway Motorcycles Sdn Bhd (BKM) launching it into the local market it very soon. 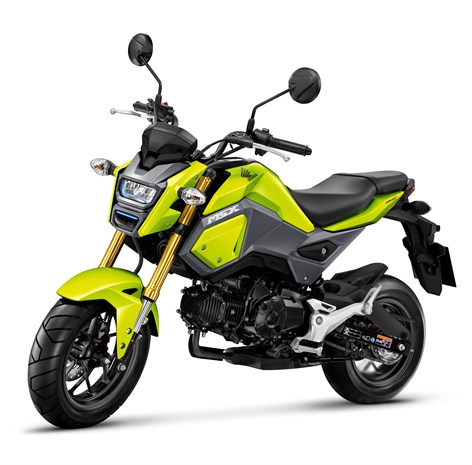 Yes, as you can see from its size, it’s a pit bike (or monkey bike if you will), which means it naturally rivals against the likes of the Kawasaki KSR Pro and the Kawasaki Z125 Pro that succeeds it, as well as the Honda MSX125 @ Honda Grom that was previously rumoured for arrival here soon.

As its name suggest, an air-cooled four-strike 135cc single-cylinder engine powers the TNT Naked T-135. Sold as the DSK-Benelli Naked T135 in India, the mill develops 12.6hp @ 9,000rpm and peak torque of 10.8Nm @ 7,000rpm according to India-based sources besides having a five-speed transmission, low seat height of 780mm and a 7.2-litre fuel tank.

On paper, this pint-sized Benelli seems to have the edge over its Japanese rivals as it offers more power and torque from its larger 135cc mill. You can also see from the spyshot that it boasts a pair of upsidedown front forks as well as all-round disc brakes, keeping it at par with said rivals again in said areas too.

Couple that with this face-lifted 2016 model’s stylish exterior design that’s akin to an MV Agusta (just check out the pipes!), this pint-sized Benelli looks set and ready to cater to enthusiasts should BKM decide to launch it.

We’ll keep a close eye on this and update you as soon as we get more details.