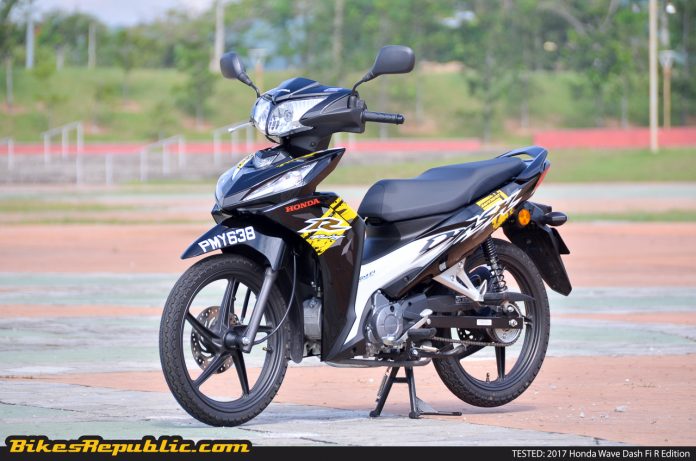 Boon Siew Honda launched the updated 2017 Honda Wave Dash Fi back in March to cater to the younger generation with its updated style and frugal performance.

The new Wave Dash Fi has an updated graphics together with a new meter panel as well as a new sporty muffler cover to give it a sportier look.

The engine has also been updated and tuned to have better performance, fuel consumption and efficiency that has been certified with the Energy Efficient Vehicle (EEV) as well as Euro3 compliance. 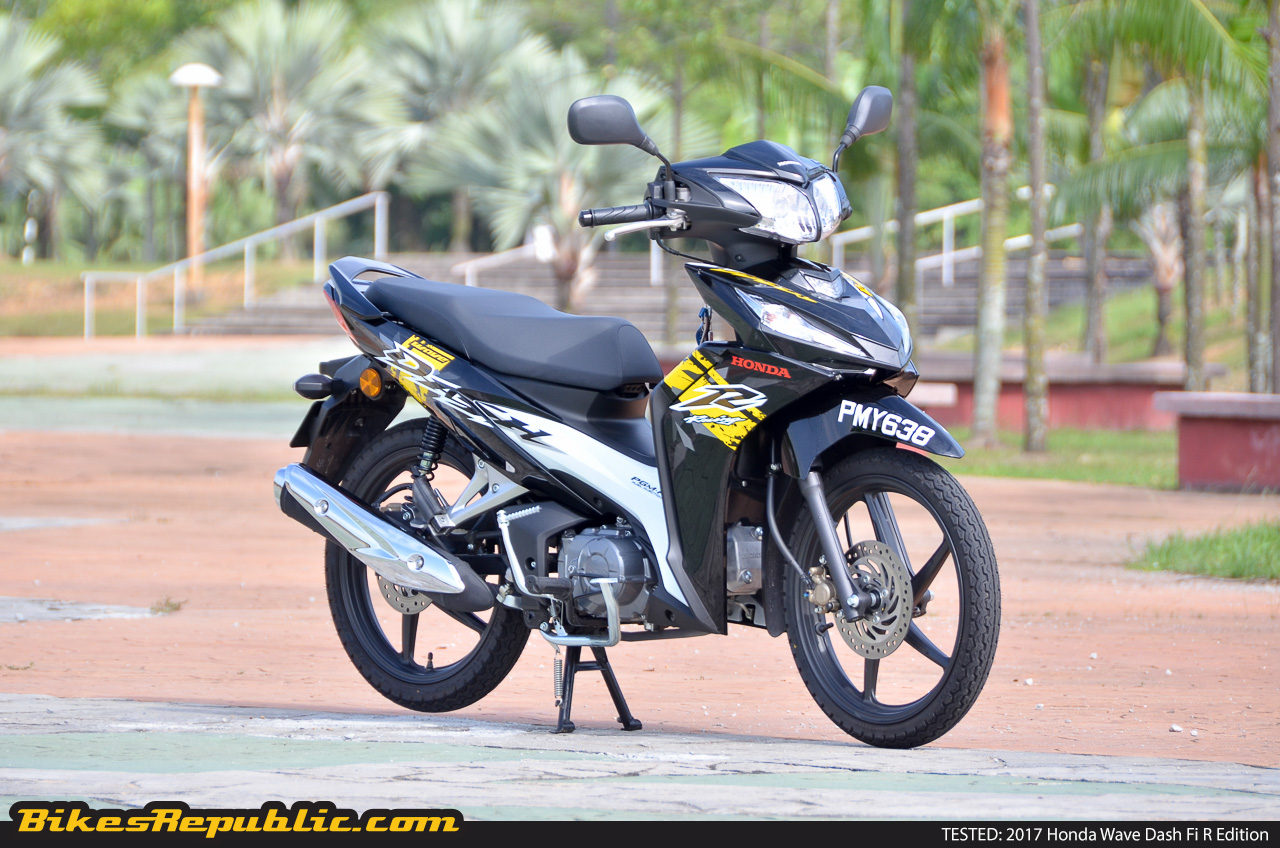 Boon Siew Honda Sdn Bhd (BSH) has been leading the motorcycling industry with many different ranges of motorcycles from small capacity kapchais, premium scooters, sporty street bikes and many more. As part of Malaysia’s unique preferences to two-wheelers especially the small capacity mopeds, it’s no surprise that BSH has a whole line up of mopeds to cater to many different folks in the country. 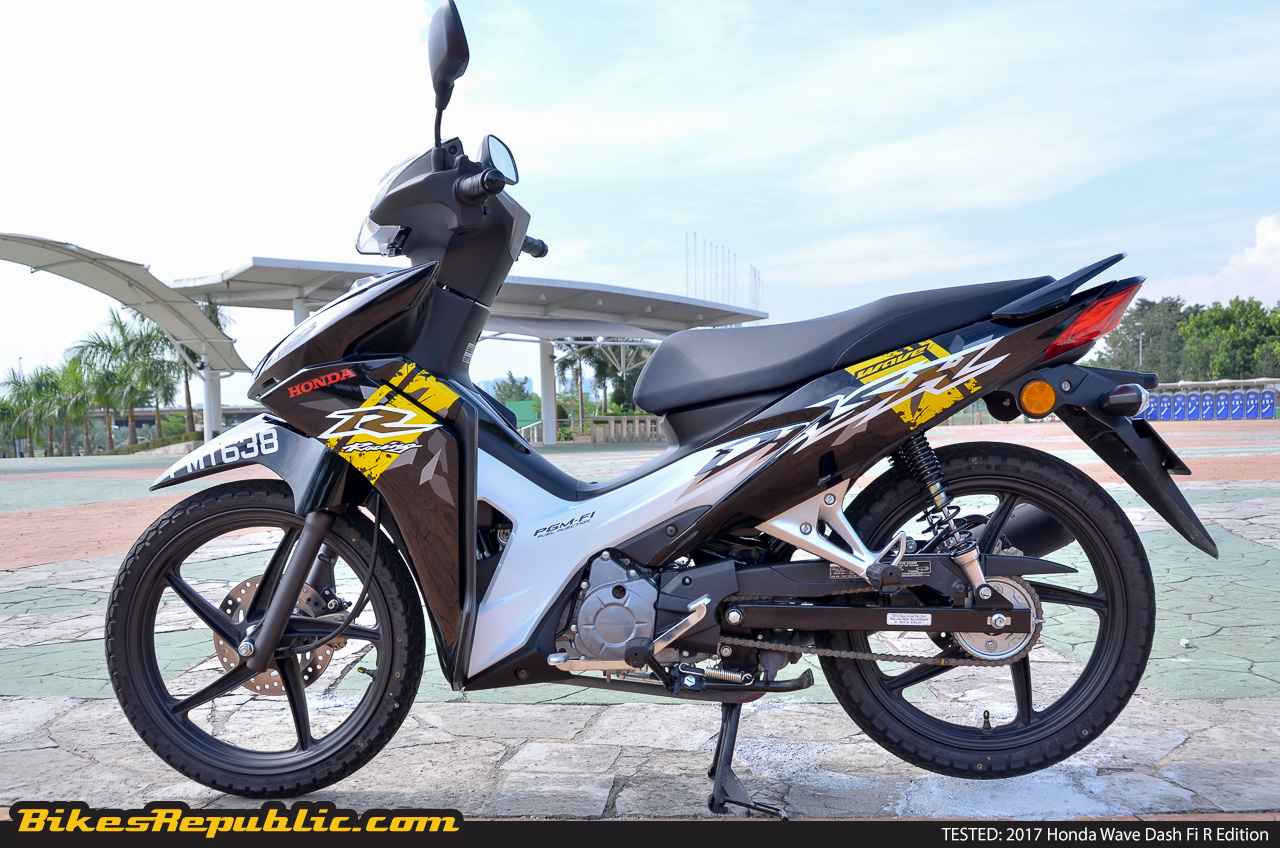 One of their best selling variants is the Honda Wave Dash Fi which has been in the scene for a few years now. When the latest generation was launched earlier this year in March during a stunning fashion show held at the e@Curve Damansara, BSH successfully labelled the Wave Dash Fi as a stylish mode of transportation that offers great styling as well as superb frugality. 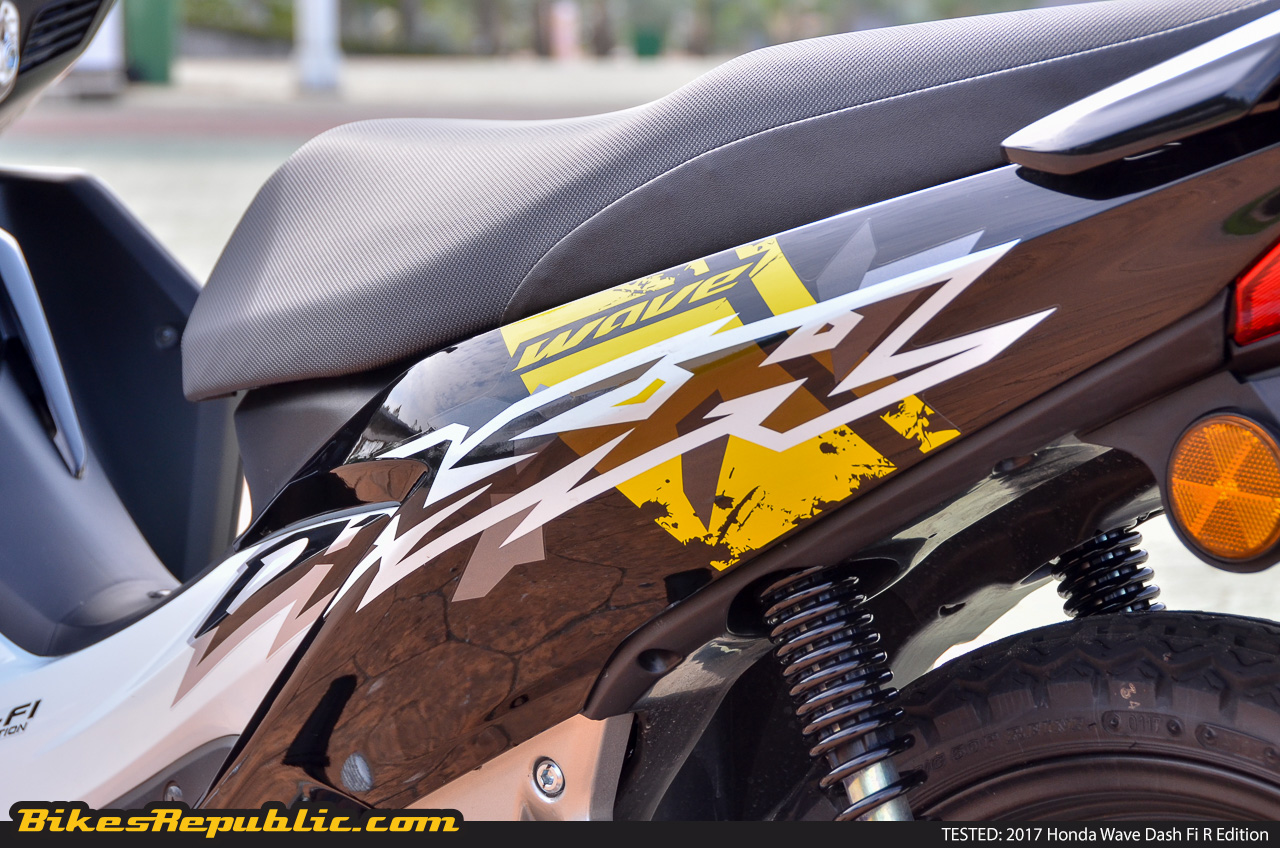 We were given the opportunity to test out the latest generation that is the 2017 Honda Wave Dash Fi R edition to really find out how and BSH has done to further improve the moped to make it a relevant choice for Malaysians as an affordable and trendy two-wheeler especially to the younger generation. The question is, did they succeed? 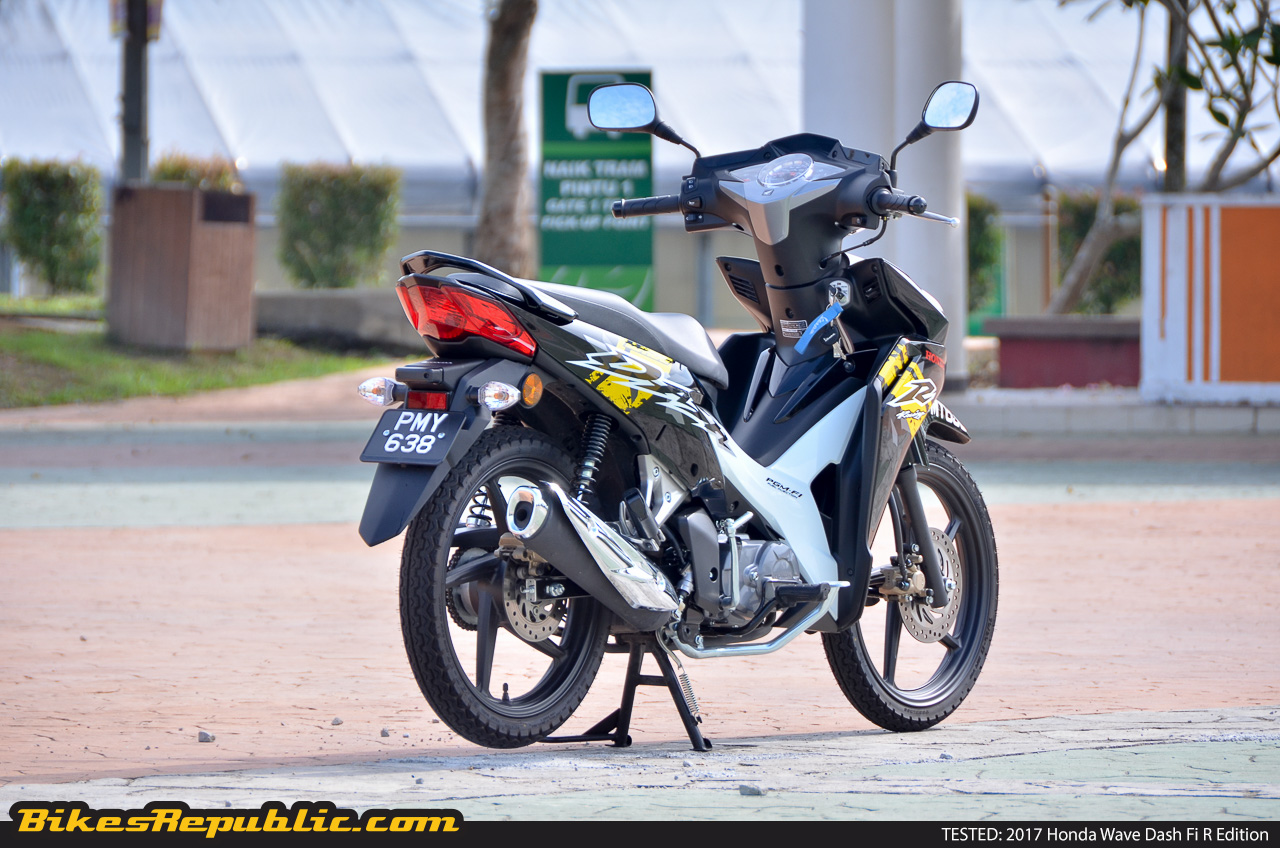 Looking at the overall design, the new Wave Dash Fi has a few updates when compared to the previous generation. The biggest change is the updated graphics which brings new life to the otherwise slightly dated motorcycle. Apart from the new facade, the new Wave Dash Fi is also garnished with an updated meter panel and also a new muffler cover that gives the cub a sportier look. 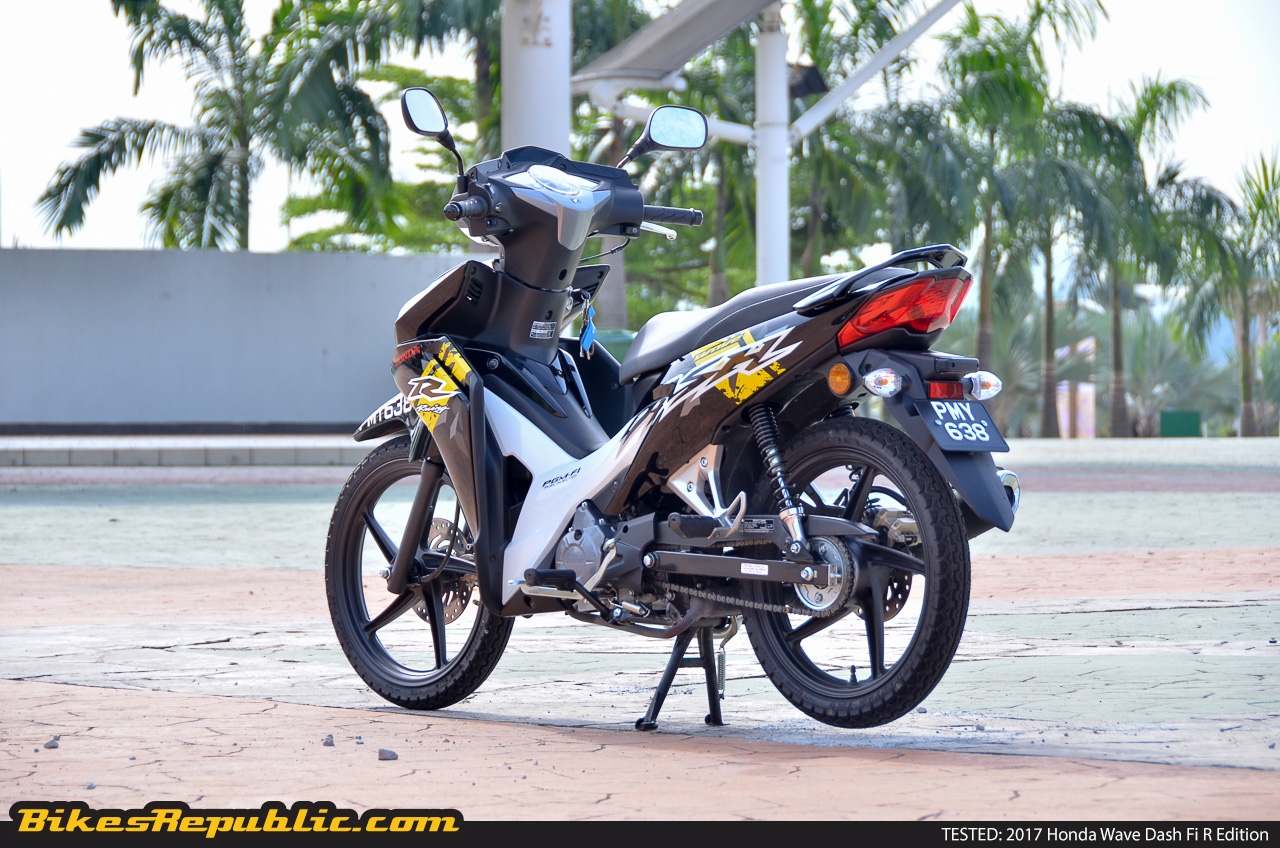 The exterior changes are subtle but we as the saying goes, “A little goes a long way”. Moving to the yet another major update is the 109cc, SOHC, air-cooled engine with Honda’s ‘Programmed Fuel Injection (PGM-Fi). Compared to the older model, the 2017 Wave Dash Fi now has 8.6hp which is a 2% increase and roughly the same amount of torque at 8.4Nm. The now Euro3-compliant power plant has been tuned to achieve those figures at lower rpm which means that the engine is now more efficient than ever. 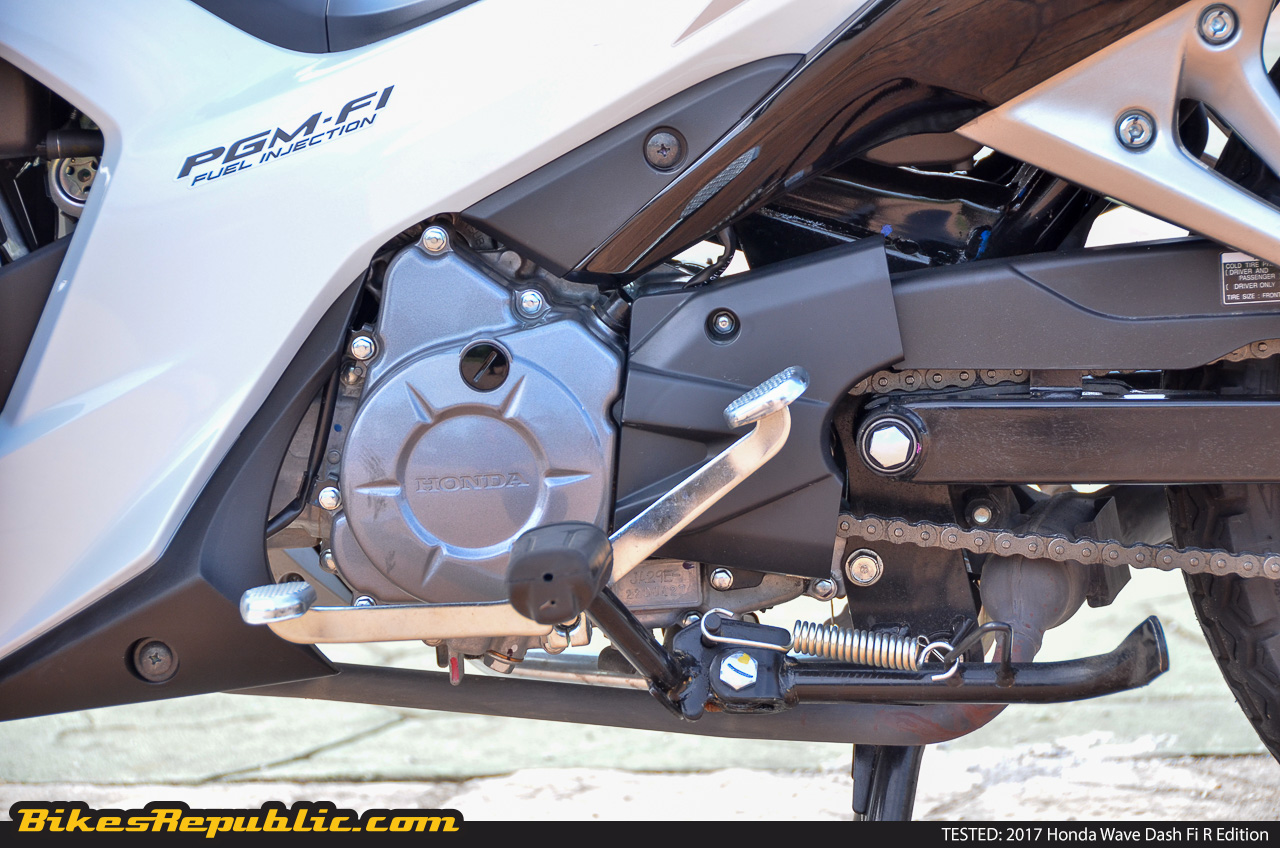 Moving over to fuel efficiency, the new 2017 model is claimed to have a range of 61.1km/L or 1.6L/100km. That’s quite an impressive figure from an already frugal previous 2016 model which has a fuel consumption of 1.8L/100km. Combined with its four-litre fuel capacity, the new Wave Dash Fi can travel up to 244.4km for every tank of fuel but after testing it in the real world scenario, we managed to clock it at slightly above 200km which is still an impressive performance coming from RM8 worth of petrol. No wonder BSH has been graced with the Energy Efficient Vehicle (EEV) status for a few of their small capacity kapchais and scooters. 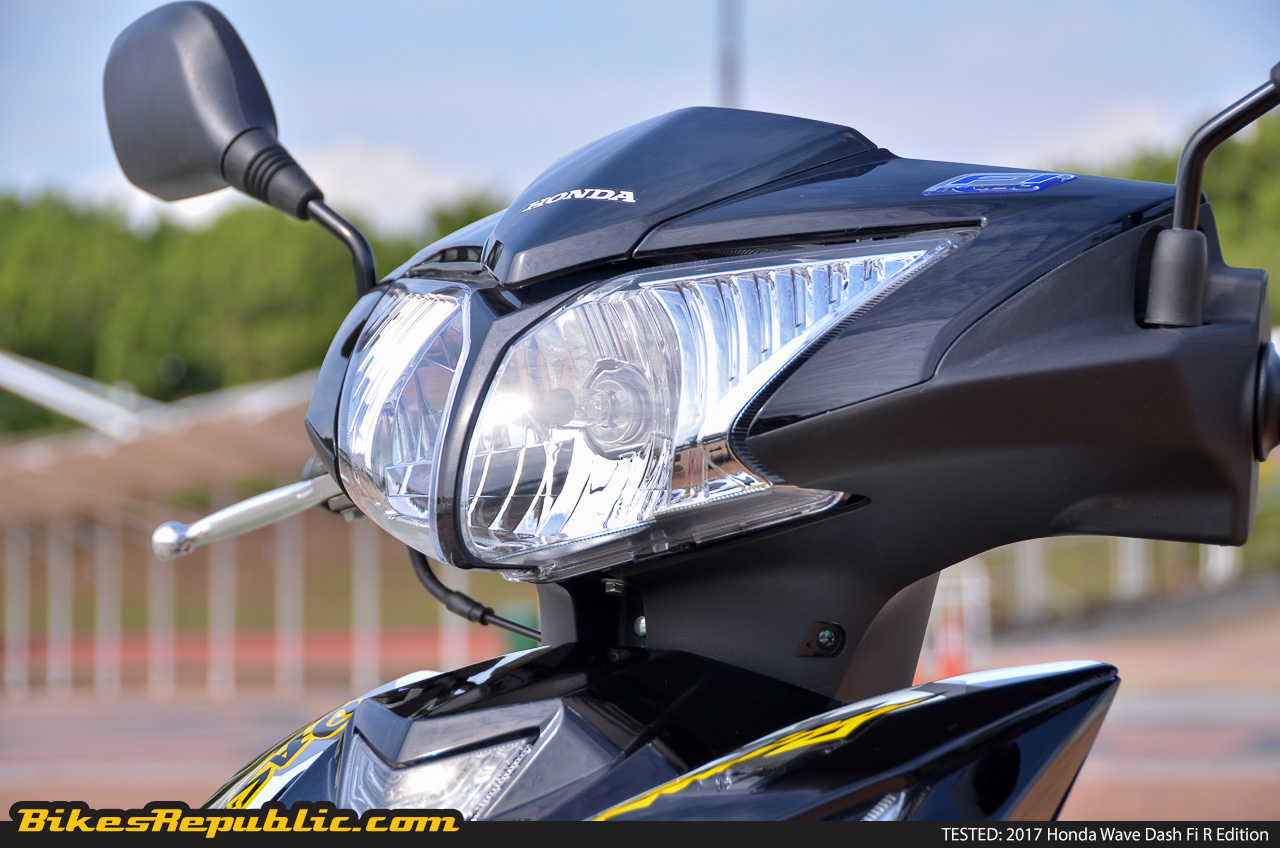 There is however a slight setback which the small Honda still inherits from the previous generations which is the vibrations. The jitters can be felt as early as 80km/h and as it progressively hit 110km/h and beyond, the vibrations are hard to ignore. We figured that a simple swap to a more quality foot pegs can help ease some of the uncomfortable vibrations. 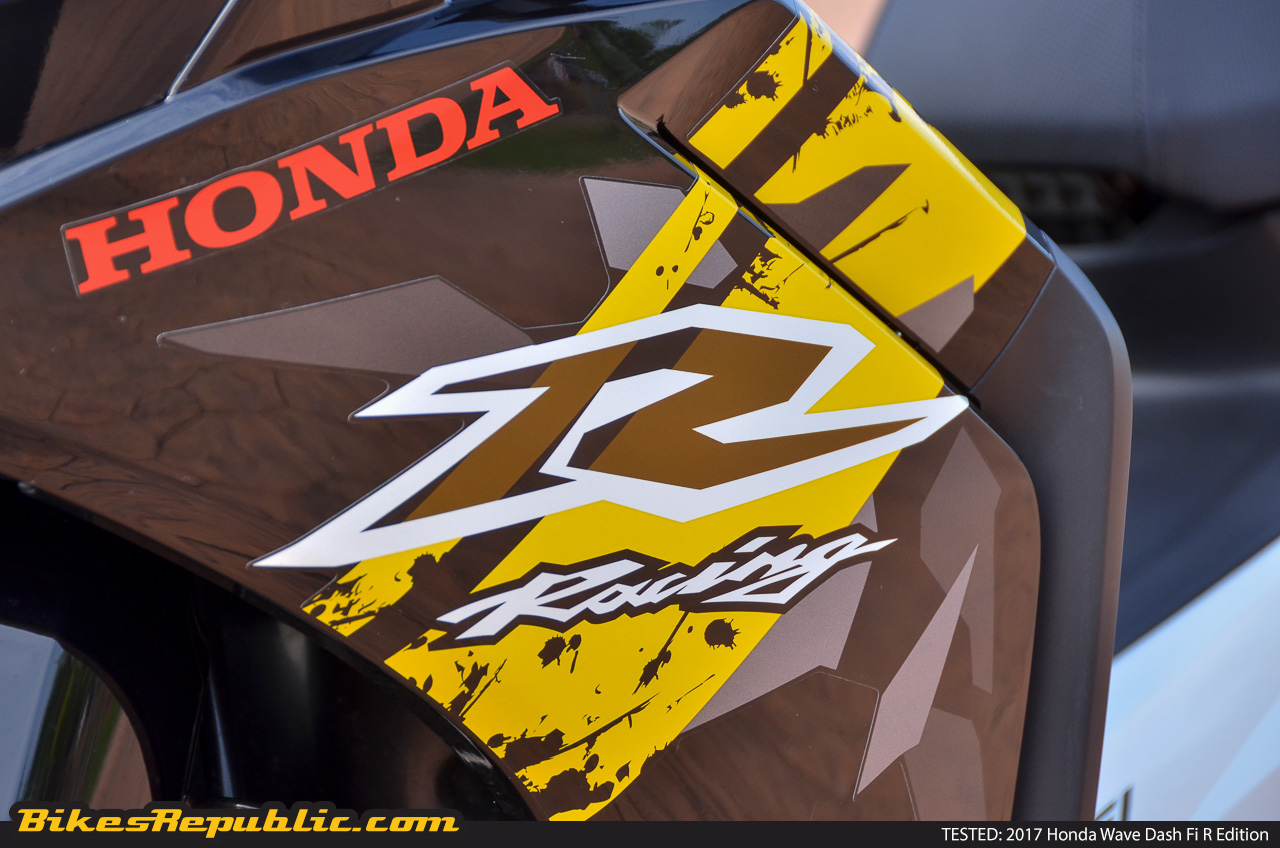 Looking at the R edition which has been graced with all-round disc brakes offer much better braking performance. The combination of both brakes give quick response, ample grip and ease of operation which is a much better aspect when compared with the S variant or the Wave Alpha where both have rear drum brake setups. 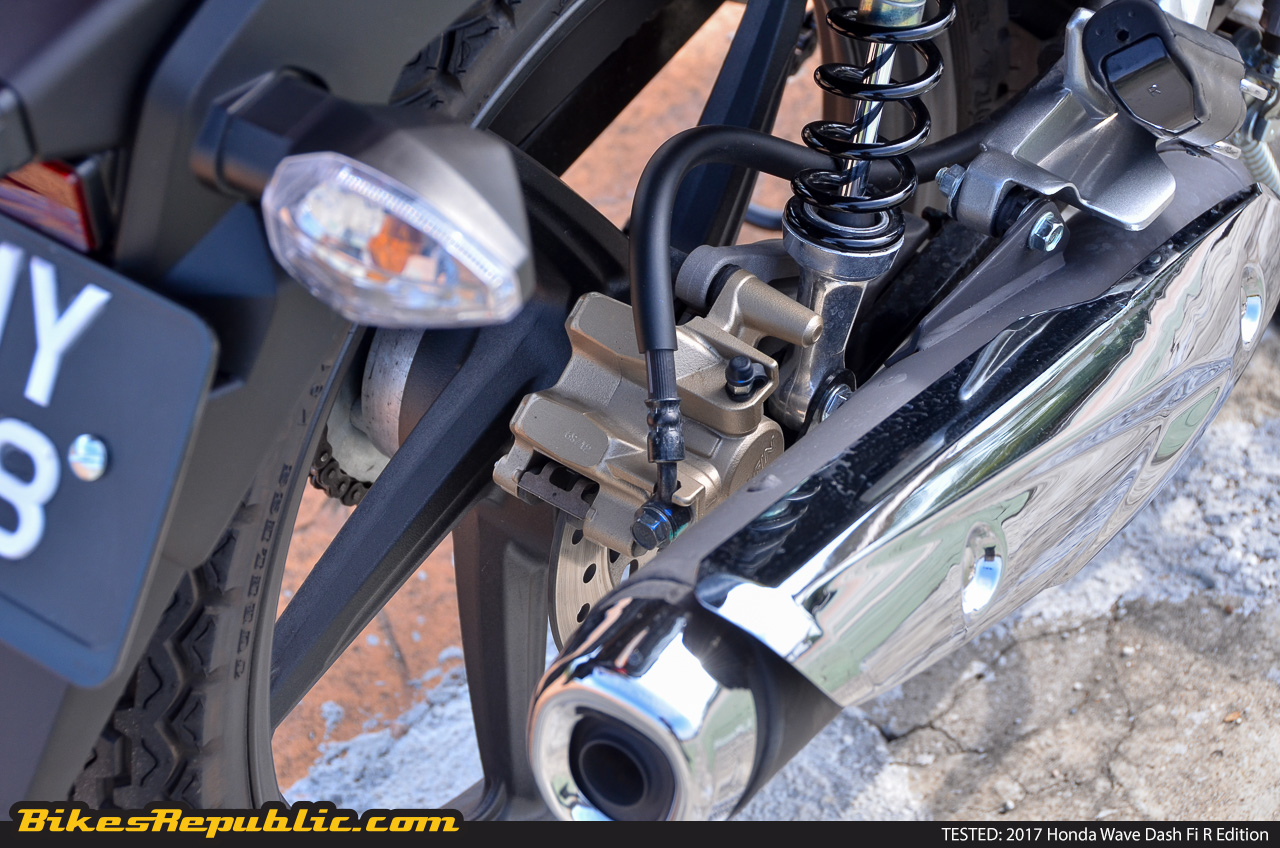 While the dimensions and weight means that the Wave Dash Fi can go through traffic with ease, the front end does tend to be more on the sensitive side when swerving in and out of traffic jams. It does require extra care and concentration but with a bit of practice, you’ll forget that it’s even an issue. 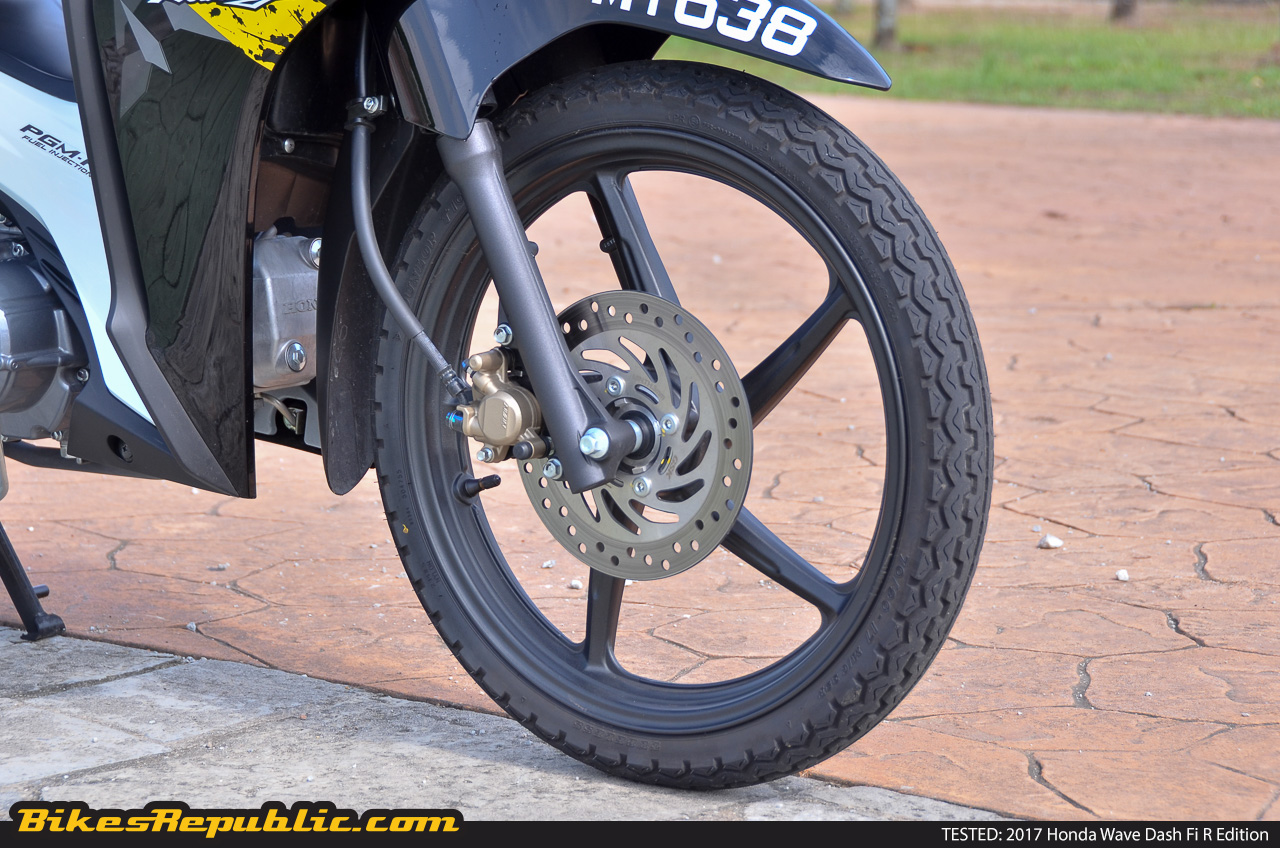 And the end of the day, people will always ask if the bike is a smart buy that will worth their money. To us, the price tag for the R edition at RM6,178.74 (basic price with GST) which is a slight RM243.80 increase from the previous model. That minor price increase justifies all the changes and upgrades to the new Wave Dash Fi and it’s no surprise that the kapchai is selling like hotcakes. Don’t just take our word for it, just take a look around the road and you’ll most likely see a Wave Dash Fi roaming the road every few kilometres or so especially the Repsol Honda edition. It is truly a good looking cub priced just right for all of its style and performance. 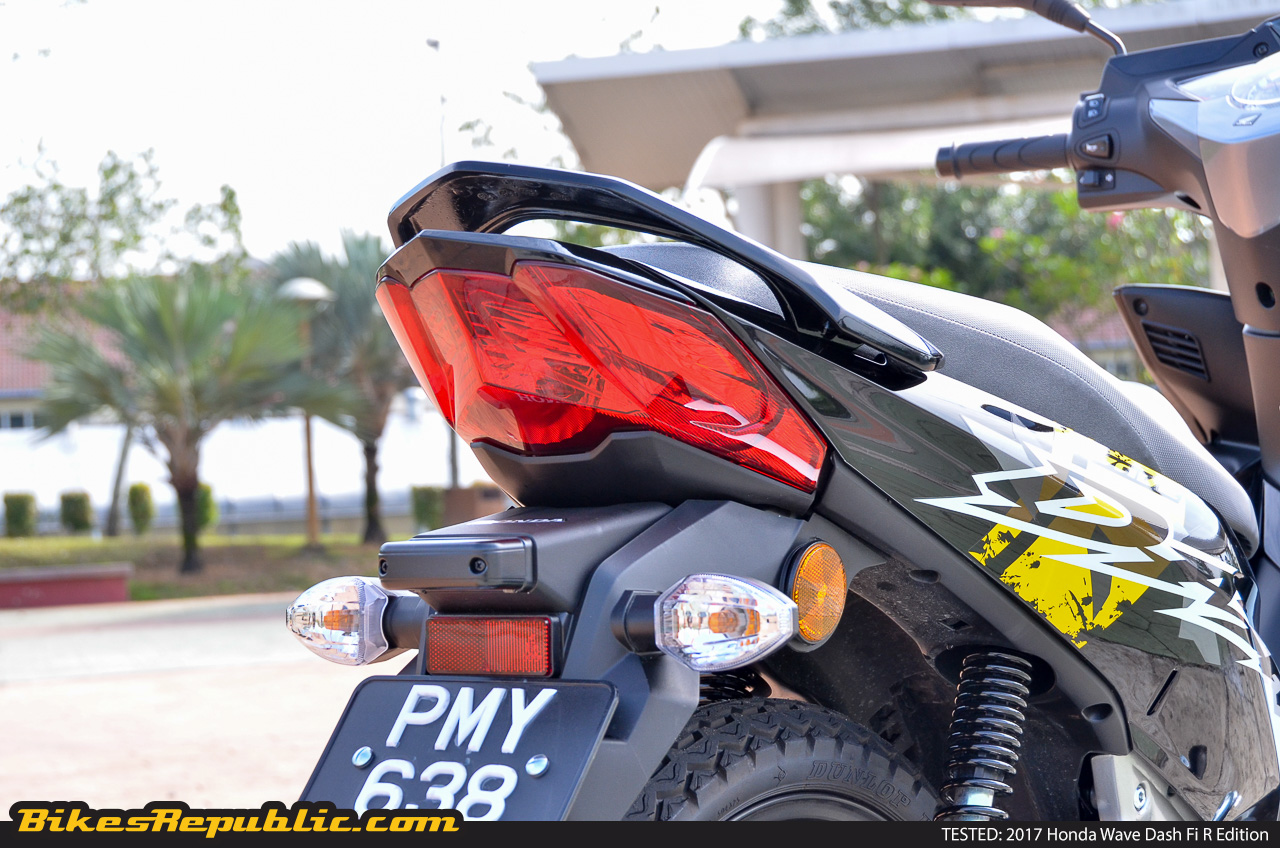 The test bike we got to try out is in the Pearl Magellanic Black colourway but it is also available in Vivacity Red Pearl Nightfall Blue which are just as enticing to the eyes. The 2017 Wave Dash Fi comes with comes with a two year or 20,000km manufacturing warranty (whichever comes first). It’s true when Honda said that the 2017 Wave Dash Fi will “Make an Impression, Everywhere You Go.”