This Moto Guzzi 950 from Stile Italiano had made café racer/custom bike news some time ago, but it’s just too beautiful not to share.

Stile Italiano was launched in 1999 and specializes in selling high-end classic, collectable and exotic motorcycles and cars, which include a Ducati 900NCR Endurance racer ridden by Virginio Ferrari, Moto Guzzi 850 Le Mans Mk I, and, and, and, and…. Just too many to list! (Please click here to visit their website.)

However, Stile Italiano’s founder Gianluca Tieppolo, business parner Chritian Diana, skilled mechanic of 25 years, Loris Lession, and his team of skilled builders only build café racers for themselves. That way, they could pour their souls into their creations and conform not to what others want.

They work on mostly Moto Guzzis. This “950” here started from the Moto Guzzi 850 T3, first introduced in 1975. As Stile Italiano took the design cues from Honda’s legendary CR750 race bike, this project was then christened as “Moto Guzzi CR950.” Gianluca wanted this to be their most elegant project and chose a 70’s racebike styling.

First, the Guzzi’s frame was modified to it the revised bodywork. The stock forks were replaced with a pair of 80s-era anti-dive forks, while a pair of rare FOX air shocks took up the job of suspending the rear.

But take a closer look at that front brake. It was considered the ultimate drum brake of its time. This is a 300mm magnesium drum/hub Fontana item, usually found on the Triumph Trident racebikes of the 60’s.

Since the bodywork came from the aforementioned Honda CR750, it had to be modified to allow the engine’s transverse cylinders to poke through, creating an integral form rather than two separate “skin-and-bones” look. A new rear end was fashioned to complete the bike’s lines, instead of leaving the original 850 T3’s fender.

Other beautiful bits include clip-on handlebars and an original Moto Guzzi V7 tachometer. The tank is handmade from alloy and has a battery housing underneath it.

As for the engine, it has been modified from stock. The heads were ported, and the capacity increased to 950cc. The heads are twin spark using a Dyna ignition system. The original 30mm Dell’Orto VHB carburetors were changed to Dell’Orto 40mm items. Spent gasses exit through a custom Virex system whose muffler box wraps up tight underneath the bike.

Finally, when it came to completing the bike, Stilo Italiano would not compromise on the best paint scheme, fit and finish as a reflection of their shop being specialized in high-end classics. Gianluca chose the special “mirror effect” like what you’d see on a grand piano. There were touches of brass to complement the black and gold paint scheme. 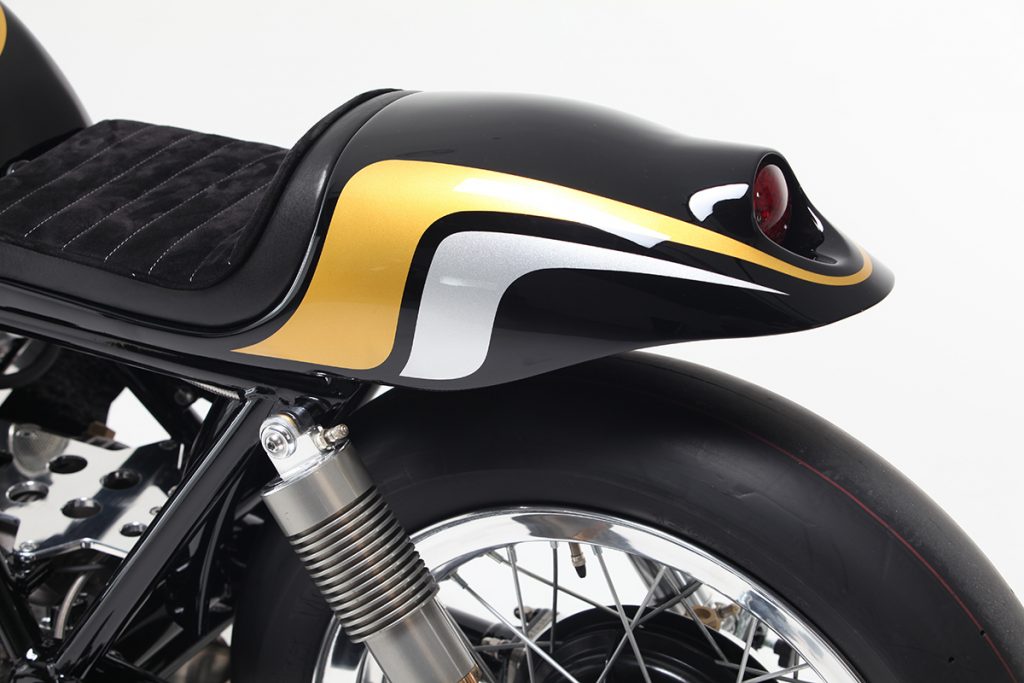 It took the team a total of four months of painstaking work to complete the CR950. Worth it, in our books.

Let’s see what these guys can come up with next!

Source: Return of the Café Racers, photography by Max Trono