We complained in Part 1 of this series about how boring new motorcycle names have become, but in Part 2 Ten Motorcycles Named after Racetracks, there is one current bike in production which is named so and thankfully, it goes as great as its name. Can you guess which one is it?

Moto Guzzi was clearly in financial problems in 1973 when De Tomaso took over with the backing of the Italian government. The management decided that smaller, less expensive bikes was the solution, resulting in the 500cc V50 and 350cc V35 in 1976. They were less than popular, so Moto Guzzi created a more powerful version of the V50 called the Monza in 1980. V35 also went through a similar makeover and was named the Imola.

Named after the infamous Daytona track, the 1979 RD400F Daytona Special commemorated Yamaha’s successes at the track and also the last of street-legal two-strokes in America. When the RD350LC introduced, it was only sold in Europe but imported in the States as a competition-only motorcycle.

When American racer Buddy Elmor won the 1966 Daytona 200 aboard a Triumph Tiger 100, it was the first victory at the track for Triumph. Triumph then launced a 500cc, twin-cylinder roadster called the Daytona to commemorate their feat (there was also a Tiger Daytona in 1967). Moving forward to the current Triumph Motorcycle Ltd era, the Daytona name was used specifically for the Hinckley-based manufacturer’s sportbikes. The Daytona lineup were universally praised for its performance and sublime handling until being phased out in 2017.

Moto Guzzi build the 850 Le Mans Mk I from the iconic 1971 750cc V7 Sport, which was the first production motorcycle to feature a five-speed gearbox and hit 200 km/h. Guzzi upped the displacement to 850cc, as well as adding new disc brakes. It was the world’s fastest and best handling motorcycle of its time. Guzzi called it the “Le Mans” after the infamous racetrack in France. The 1976 Moto Guzzi 850 Le Mans Mk I is most collectible Italian motorcycle today (sorry, Ducati). 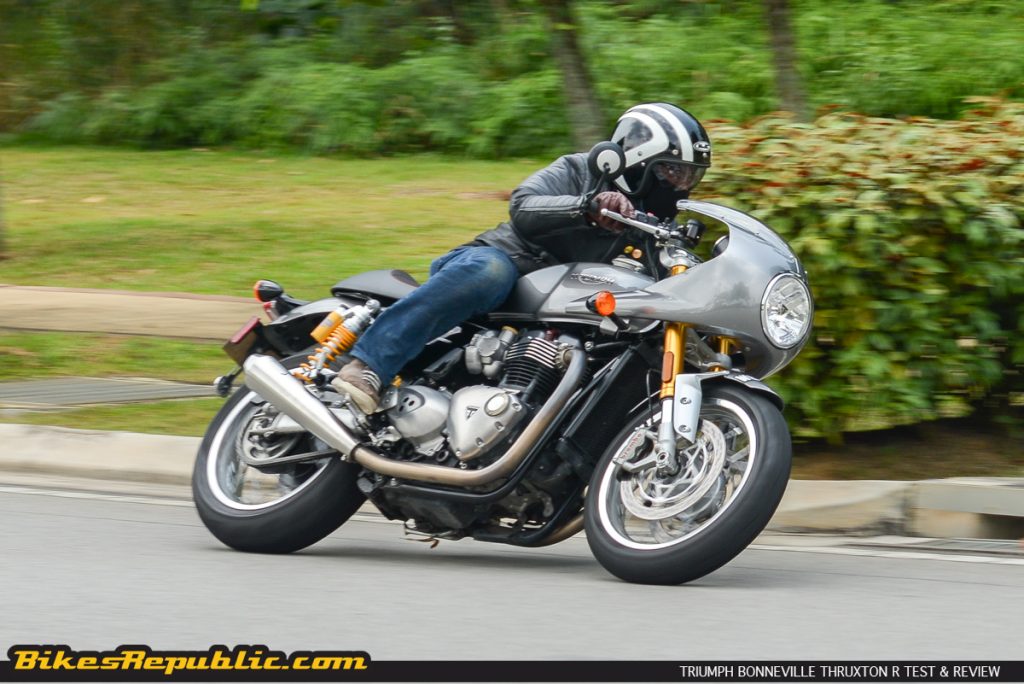 In 1965, Triumph hand-built 52 bikes as homologation specials in order to contest in the Thruxton 500 mile (800 km) production endurance race. Many enthusiasts believe that it was this series of races that created the café racer era as standard production motorcycles were modified for extra performance.

In 2004, John Bloor’s Triumph Motorcycles Ltd. produced the new Thruxton 900 as the café racer of the new modern classic Bonneville lineup. In 2016, the Thruxton was revised and featured the new 1200cc liquid-cooled engine. A “hotter” R version was also added which featured Brembo brakes, Ohlins shocks and Showa BFF forks.

The result is the new Thruxton R is the best factory café racer in the market.