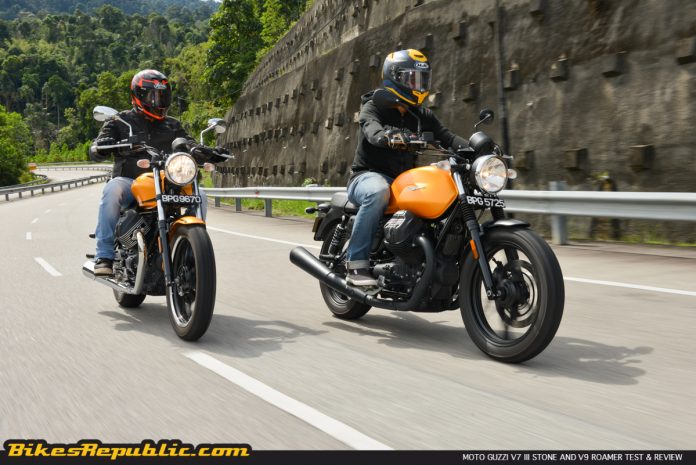 Moto Guzzi is a legendary Italian brand since 1912, but a few hiccups along the way gave the impression of the brand being “on/off.” However, Moto Guzzi is seeing a resurgence lately as the new official distributor, The Gasket Alley, has stepped up their marketing and aftersales efforts. 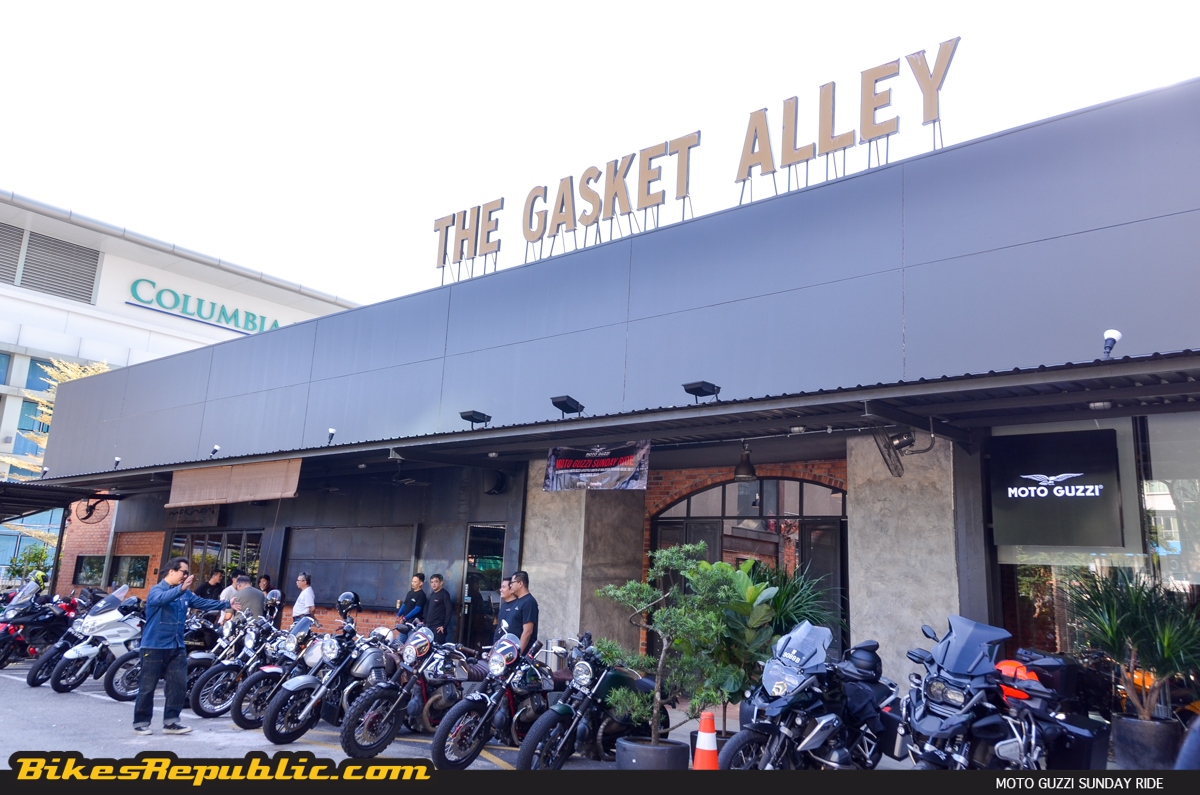 However, having ridden just one Moto Guzzi for mere hours in the past, I wasn’t sure of what to expect from these two bikes: The V9 Roamer and V7 III Stone. 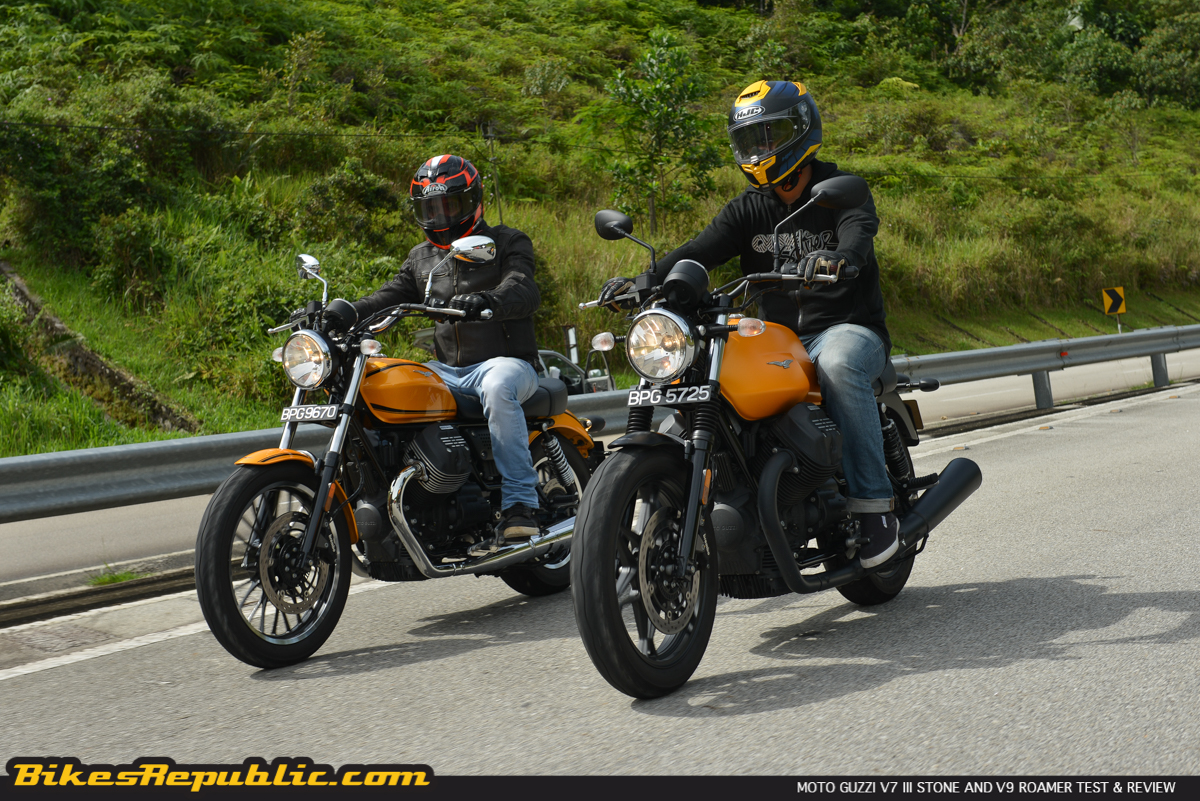 When Sep and I went to pick them up, both had that modern-classic look, but it was the V9 Roamer which appealed to me with lots of chrome offset by anodized black parts and yellow paintwork. It looked like a 70’s kind of standard motorcycle. That’s just the looks, because the 853cc, 2-valve, 90-degree V-Twin engine is all new. 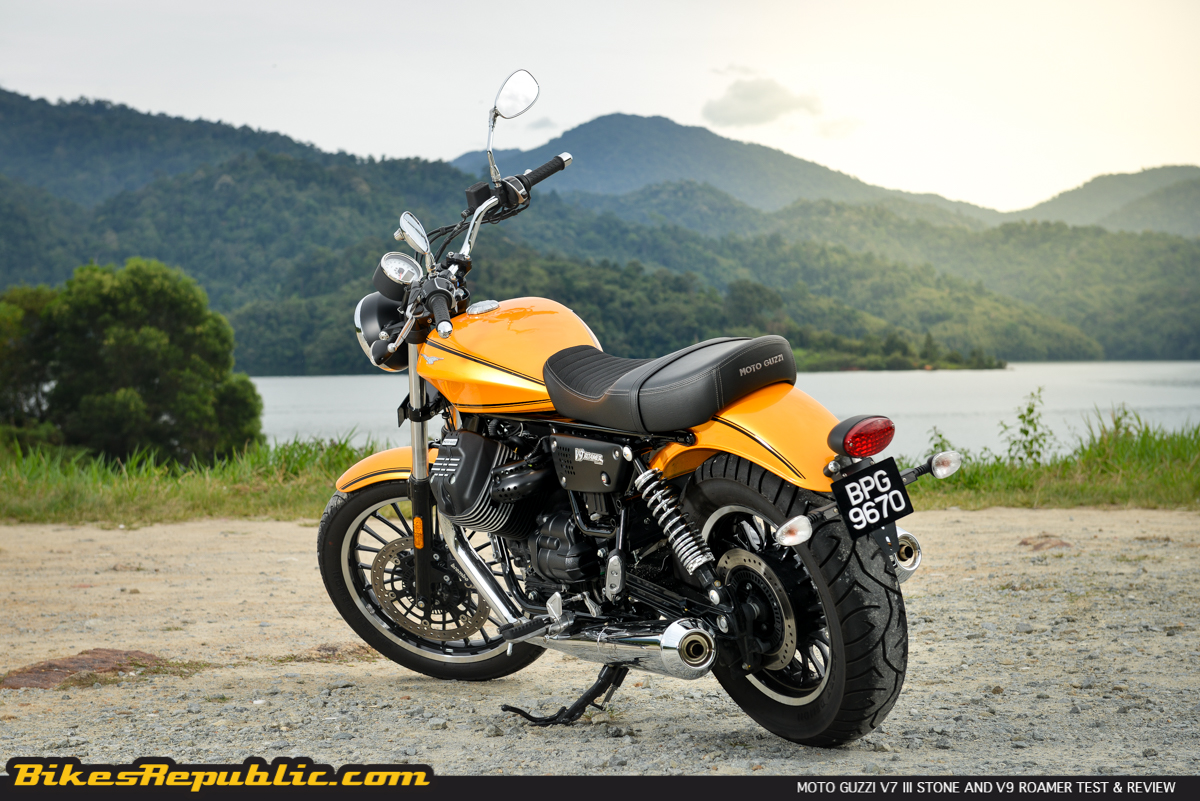 On the other hand, Sep preferred the V7 III Stone as it looked more “masculine” with its boxier fuel tank with flared sides over the cylinders, no chrome and flat yellow tank. In a way, the V7 III Stone has that unfinished look, no doubt being the model for further customization (there are hundreds of items in MG “Spark” catalog). The “III” designation means this is the third generation V7, inspired the by the 1971 V7 Sport. The V7 has been revamped in many ways including a 10% engine power bump. 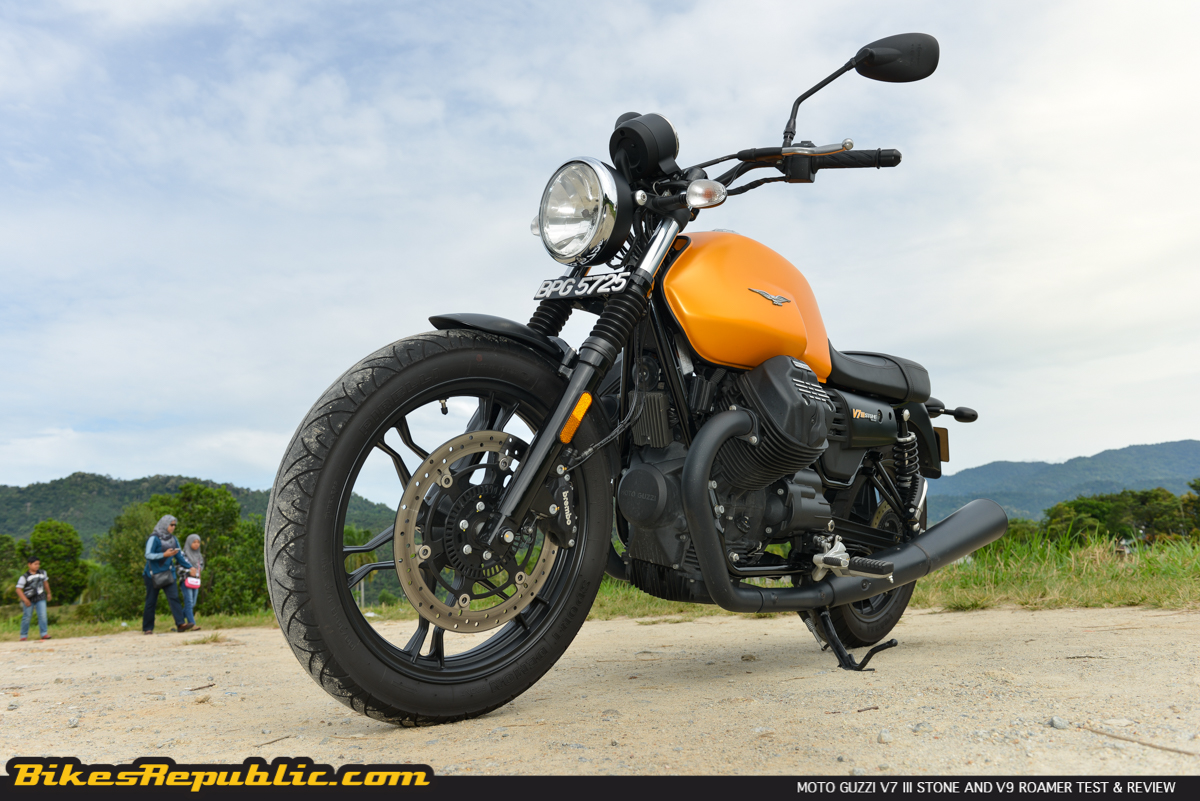 Pushing both bikes around The Gasket Alley’s parking lot revealed that they were light. It’s even more so when we climbed on board. Their seats were low and both of us could place both feet on the ground with ease. 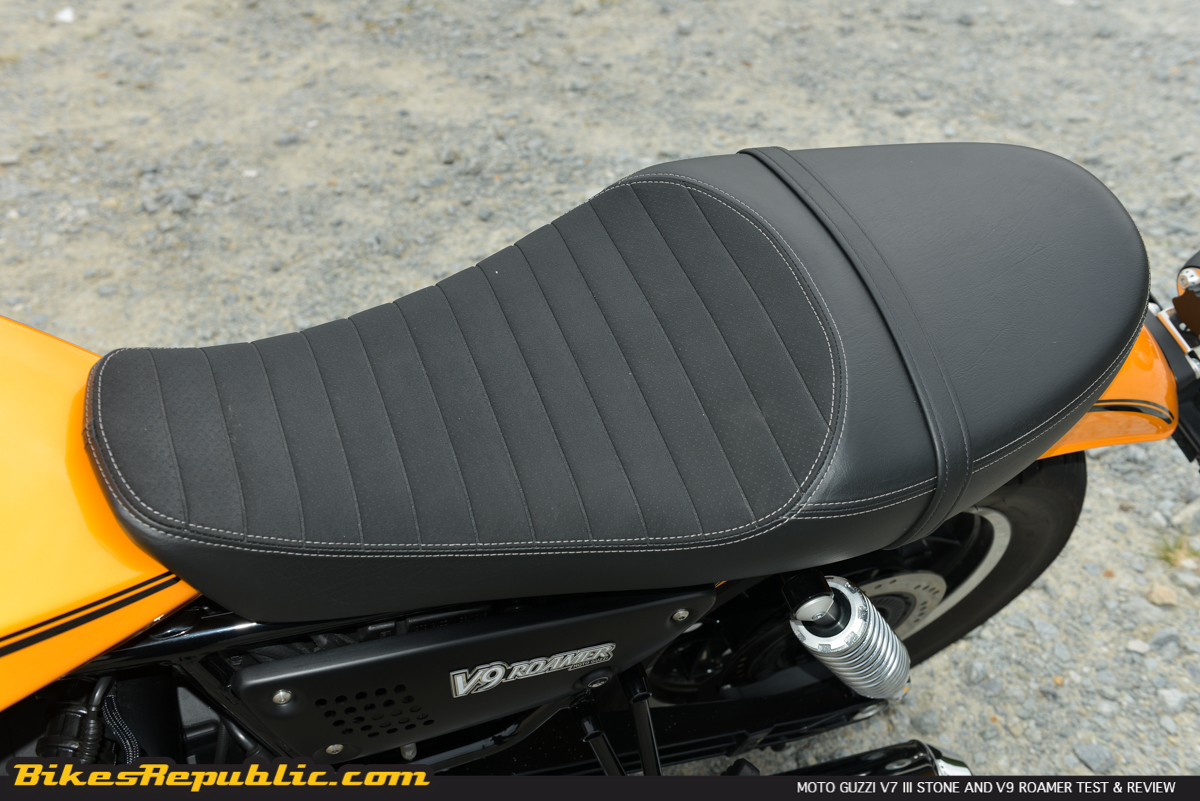 The V9’s handlebar was mounted on a riser and swept back to meet the rider. The V7’s was flatter for a slightly more café racer feel. 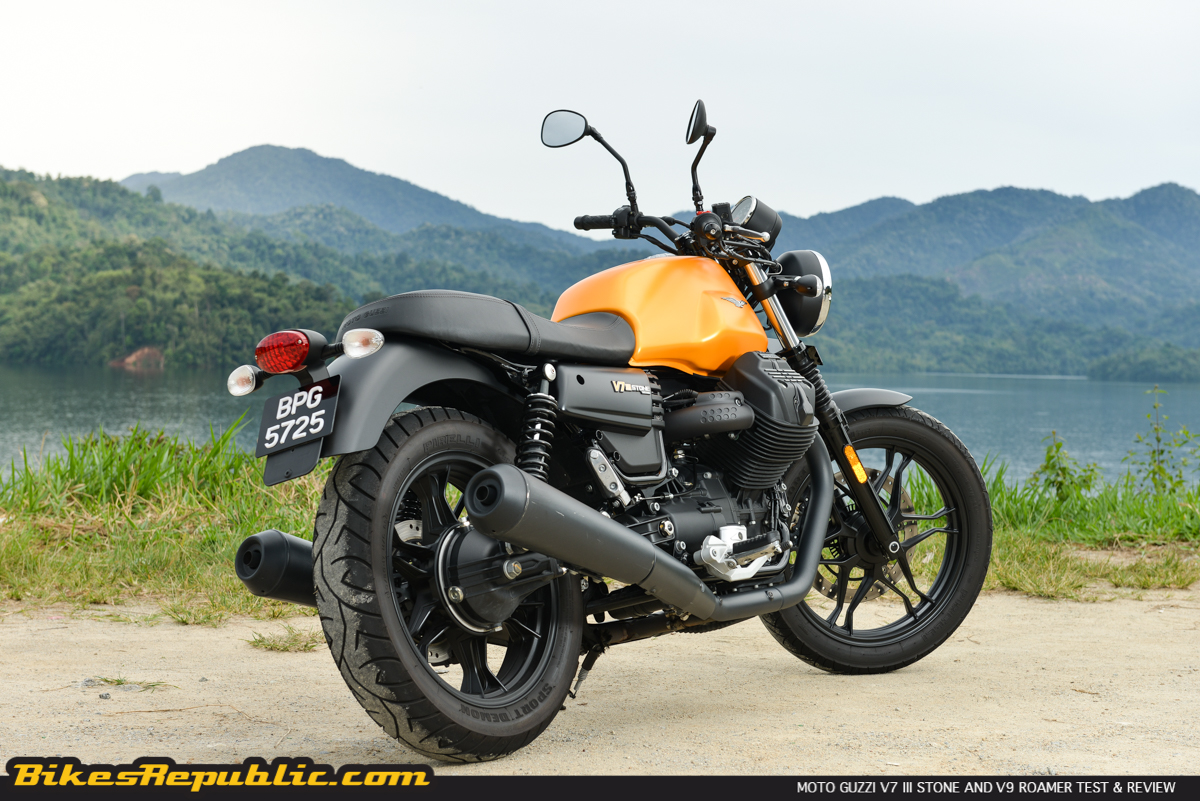 As I reached out to thumb the starter button on the V9, I noticed that the switchgear had a new design, outlined by brushed aluminium bezels, similar to the Calfornia. The V7 made do with the conventional switchgear. 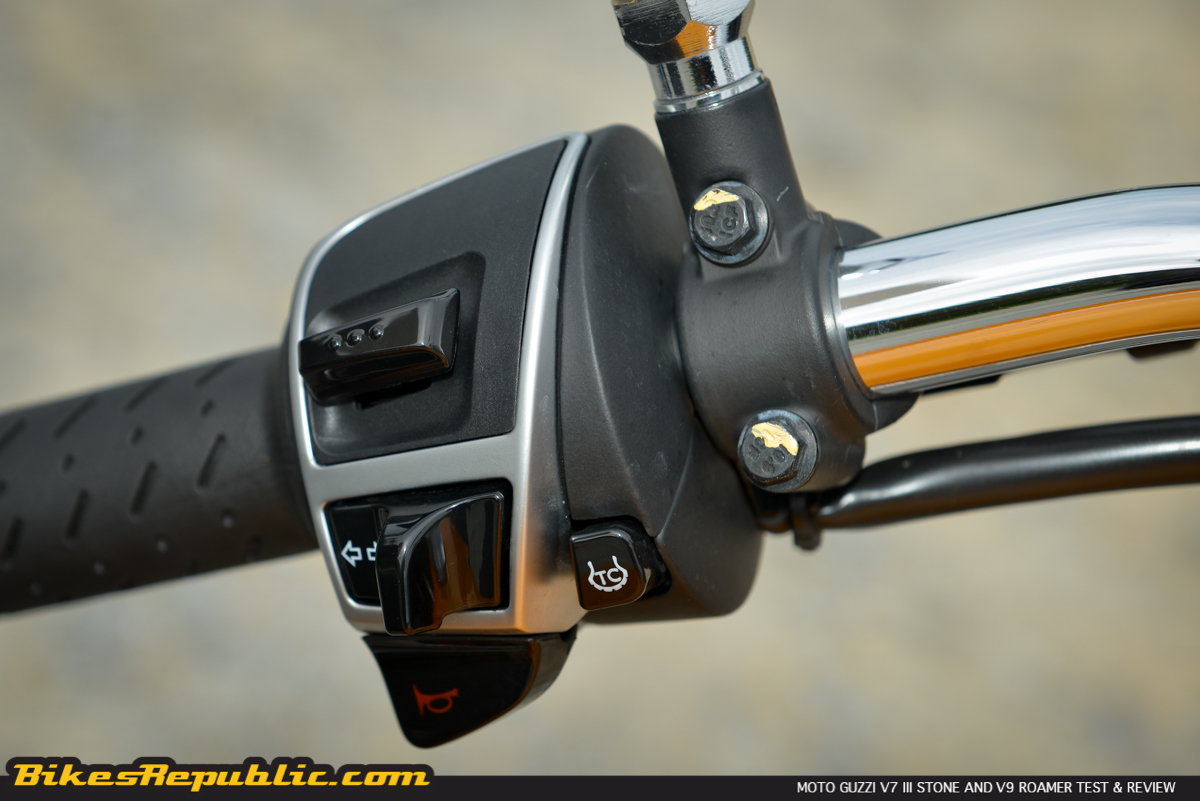 Both bikes starter quickly when the starter button was pushed, to a 90-degree V-Twin growl and the bike kicking to the right simultaneously. Such is the character of transverse-mounted twins (both cylinders projecting out the sides, instead of sitting fore and aft inside the frame), since the crankshaft is longitudinal along the axis of the frame. Conversely, V-Twin that’s mounted longitudinally (Harley, Ducati, et al) has the crankshaft across the frame, thus the frame damps out the crankshaft’s secondary vibrations. 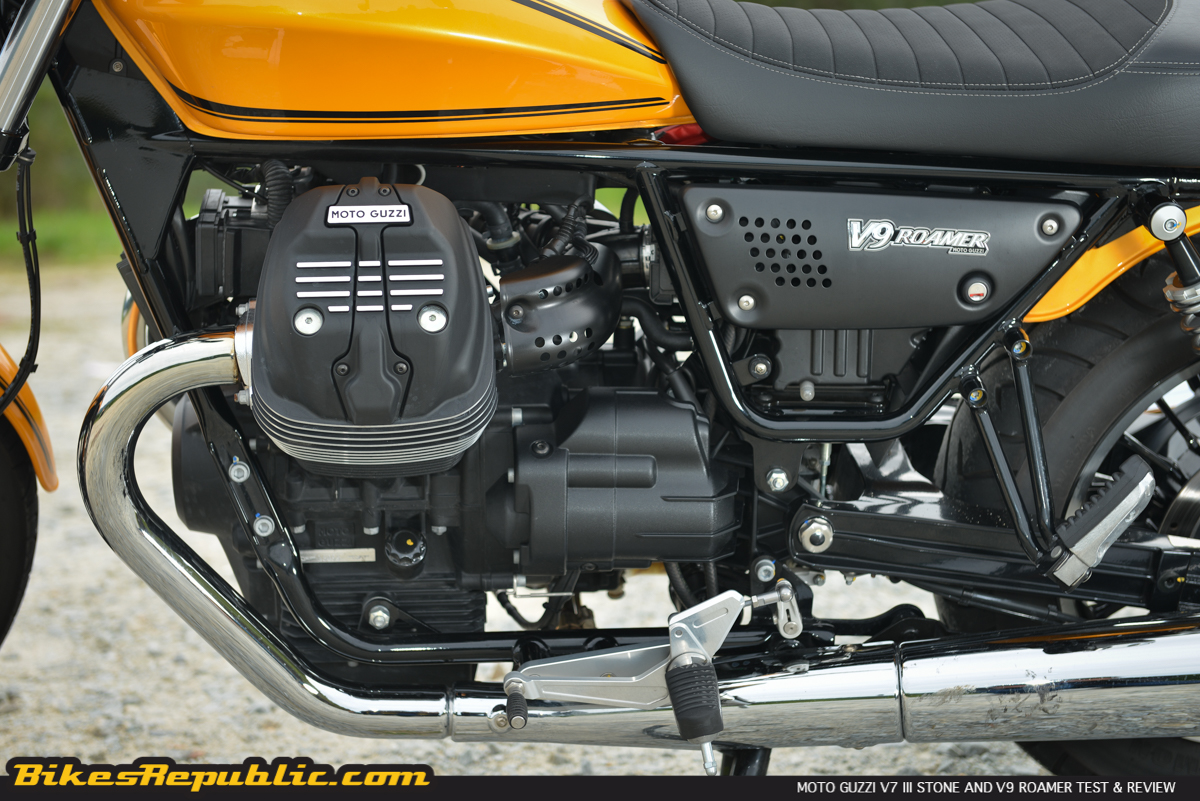 As with Moto Guzzi’s engine configuration, the transmission mates directly to the back of the crankcase (like a BMW Boxer-Twin), although the Guzzi’s single dry clutch is behind the transmission instead of sitting in the middle between the two parts. Power transfer to the rear wheel is best served by a shaft final drive for transverse Twins. 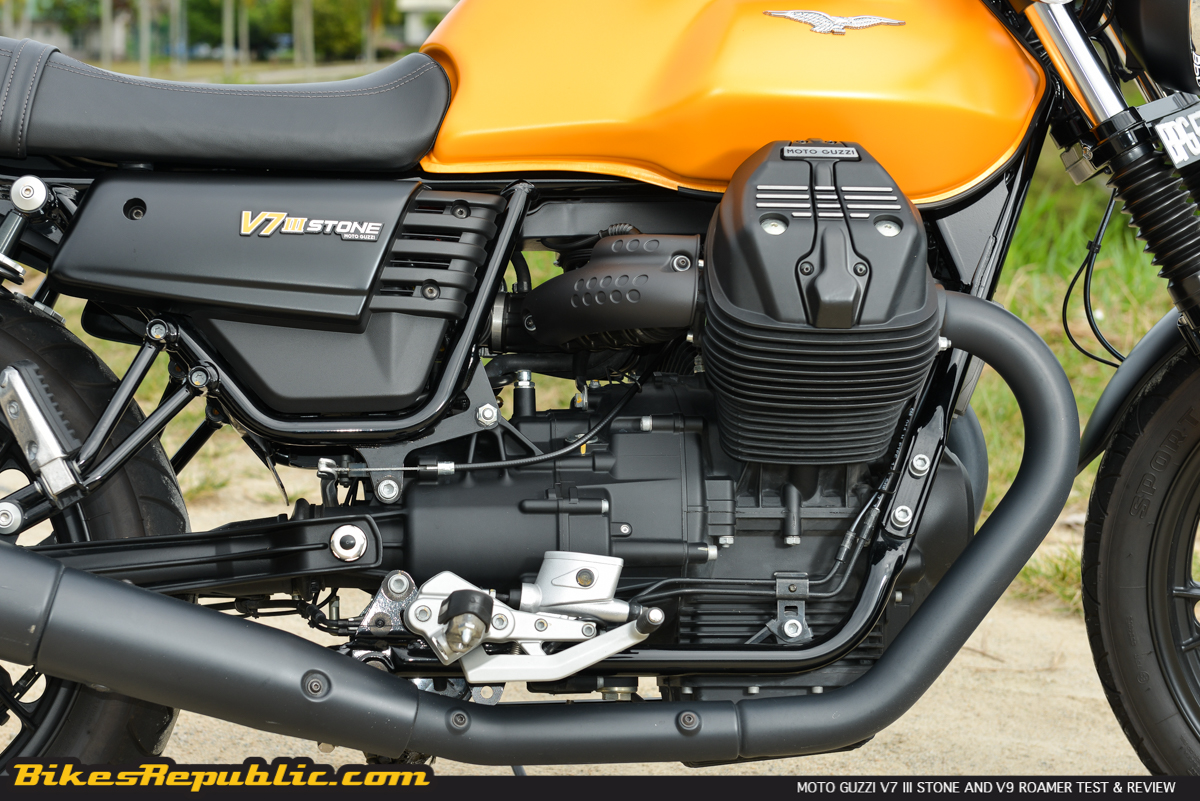 This arrangement makes for a lower centre of gravity as the heavy parts are lower near the ground, as opposed to engine configurations where the transmission is “stacked” above the alternator (although it is more compact). 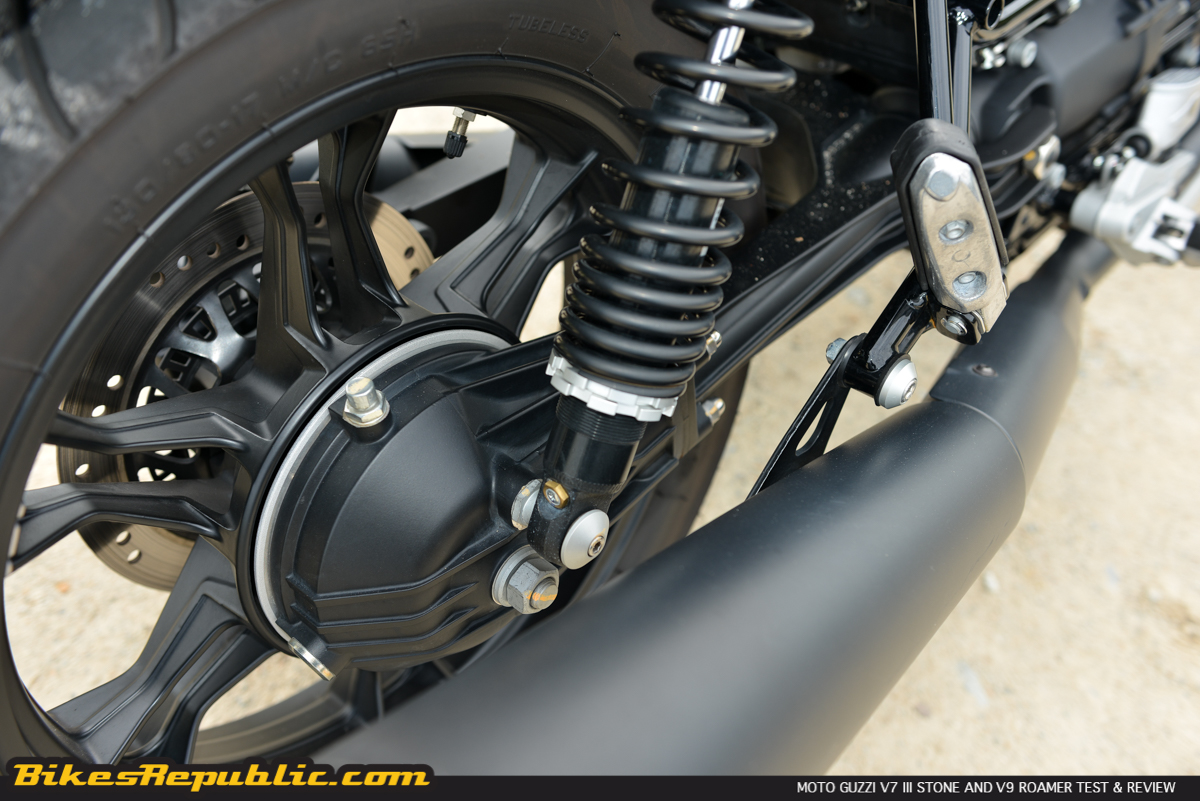 Anyhow, right away, the V9 Roamer exhibited a relatively maneuverable despite having a 19-inch tyre up front and 16-inch at the rear. Similarly, squeezing through traffic was easy as the bike’s pretty slim. My only gripe about riding it in traffic was the overly soft exhaust volume in order to comply with the Euro 4 emission standard. I don’t have to tell you that some car drivers in Kuala Lumpur are complacent behind their steering wheels, so a loud exhaust is the way to grab their attention unless you honk all the way. 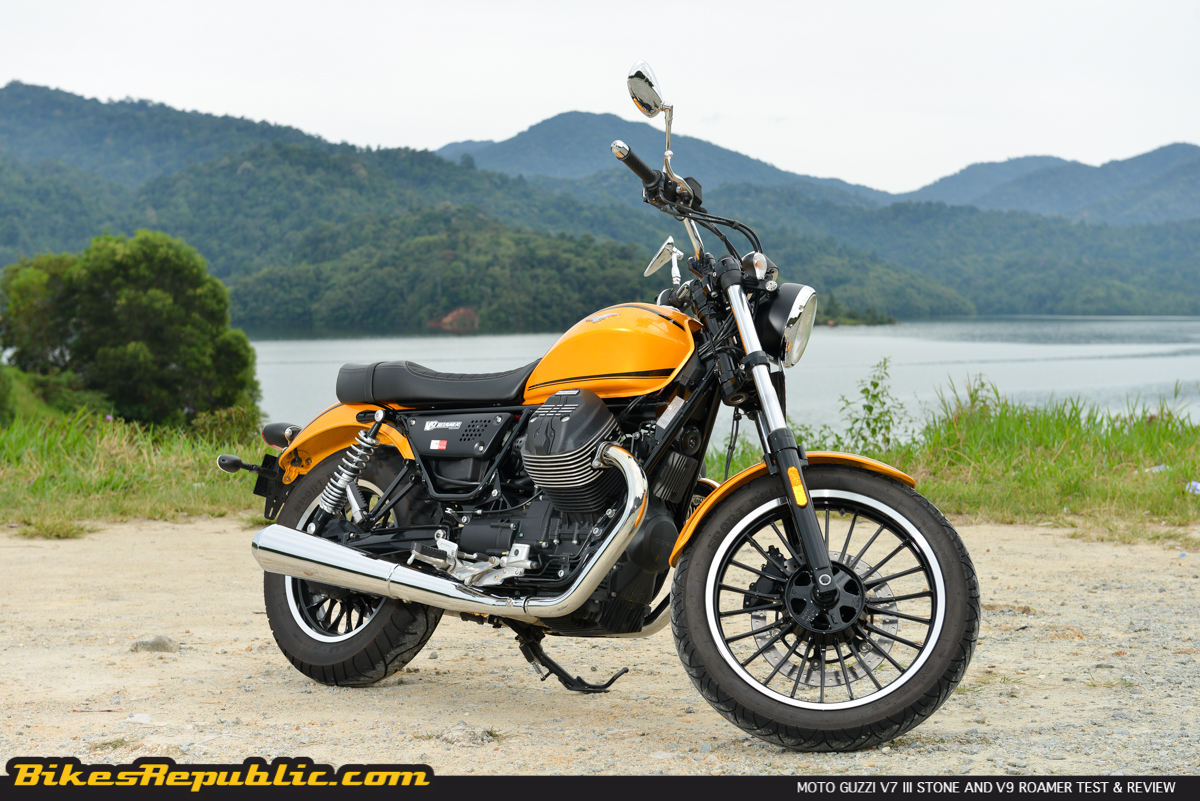 The suspension of both bikes were supple in their initial strokes but took big hits over the shraper bumps and deep potholes. Still, they were remarkably better than their predecessors. 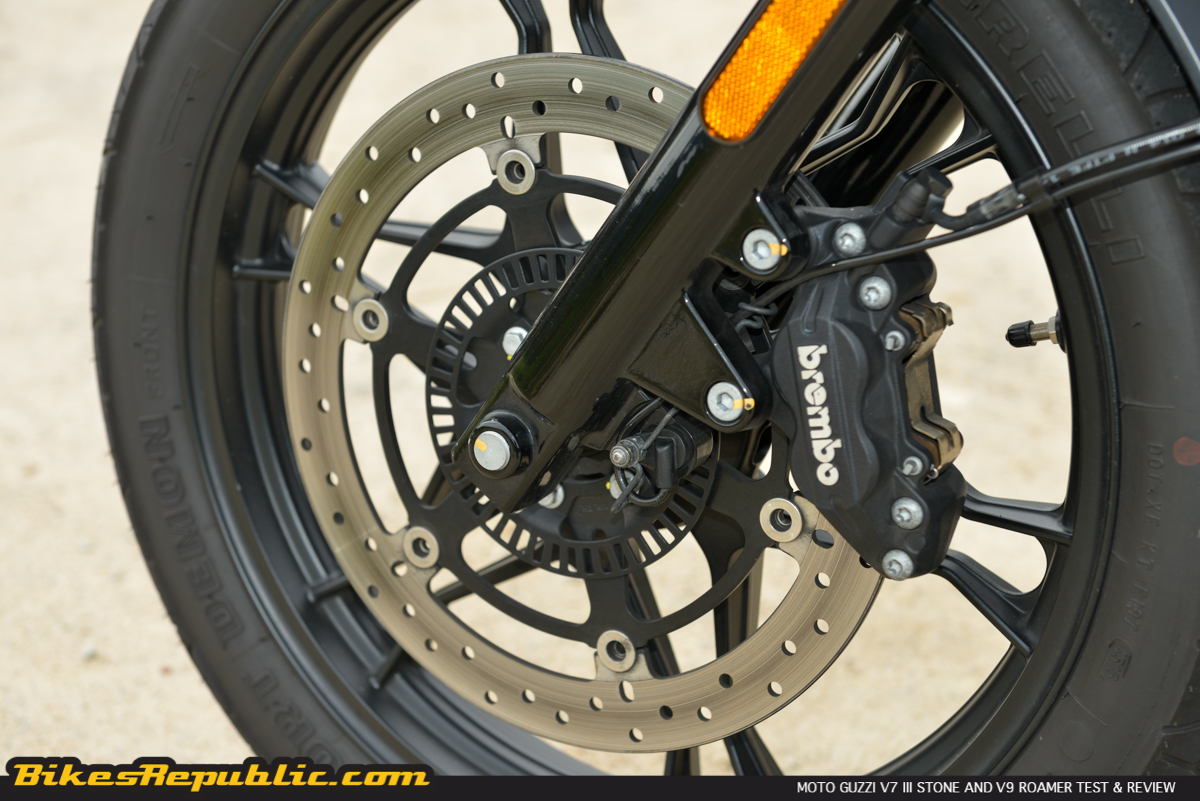 Out on the highway, the V9 Roamer went with the flow due to its taller gearing – it’s not that the engine lacks punch – the transmission was already in overdrive in fifth gear, while sixth was an even taller overdrive. This is definitely a bike for relaxed cruising. 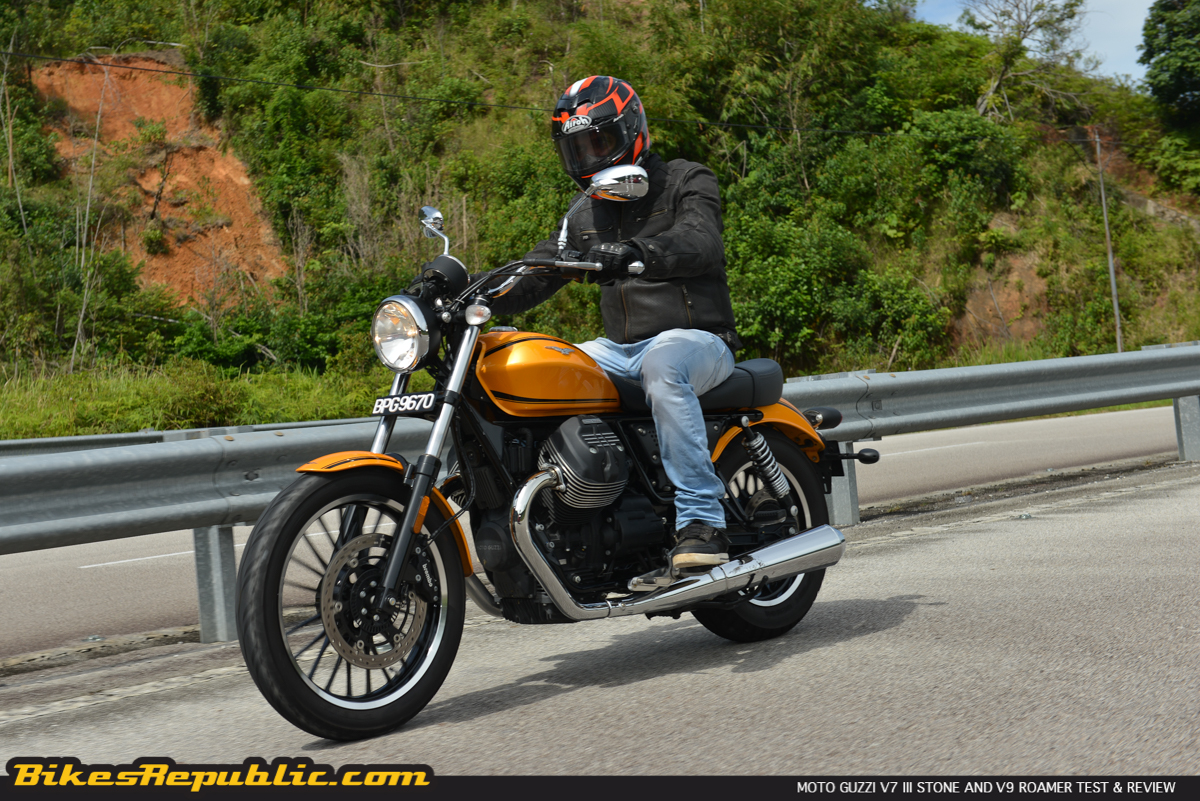 The V7 however, felt more engaging due to its shorter gearing, meaning it kept pushing all the time. In Sep’s words, “The V7 feels more hooligan.” He’s right, because the Stone is just one of the variations in the V7 III family, which includes the V7 III Racer. 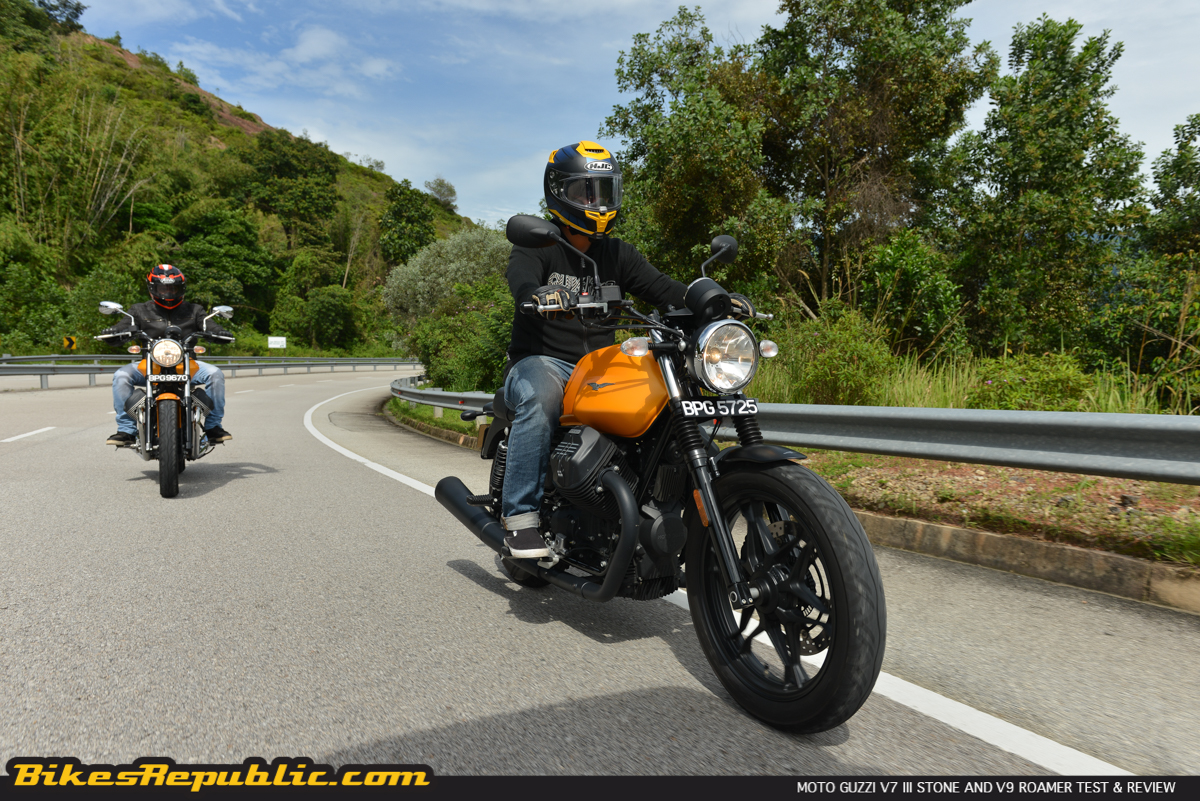 Italian bikes are famous for their handling, but I wish I could say so for these two. But it wasn’t because of the bikes, it was due to the standard Pirelli Sport Demon tyres. I’ve experienced the very same trait on another test bike. These tyres are great in running straight but their sidewalls flex like rubber stress balls when pushed in corners, causing the bikes to wobble. It also caused the V9 Roamer’s 19-inch front to steer slower into corners. My concern is that customers who are uninitiated to the Sport Demon will blame the bike. 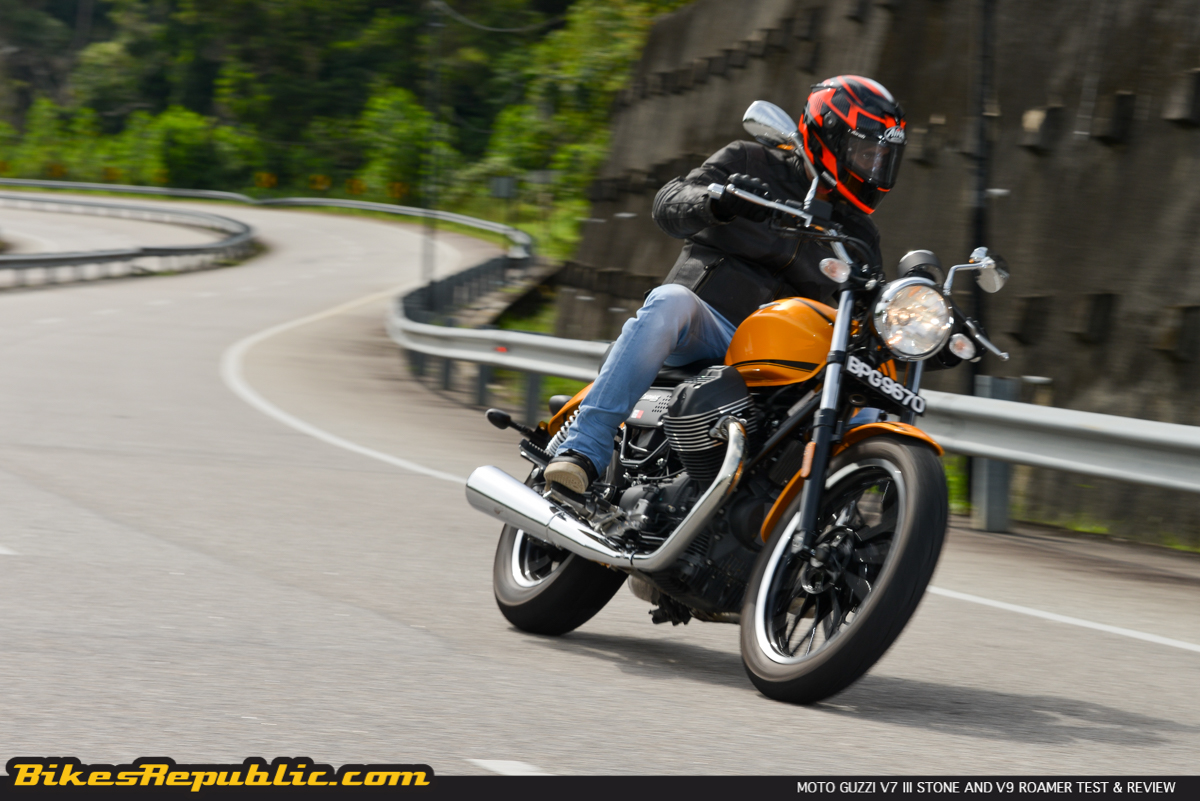 Anyway, the V7 III Stone wasn’t a slouch when we blasted down the highway. With a sportier riding position, the rider has more confidence to take it to higher speeds. The V9 Roamer, on the other hand likes to be ridden smoothly and in a benign manner. That said, remember the crankshaft’s torque kicking the bike to one side? It all disappeared as soon as we got rolling and the engine became really, really smooth. 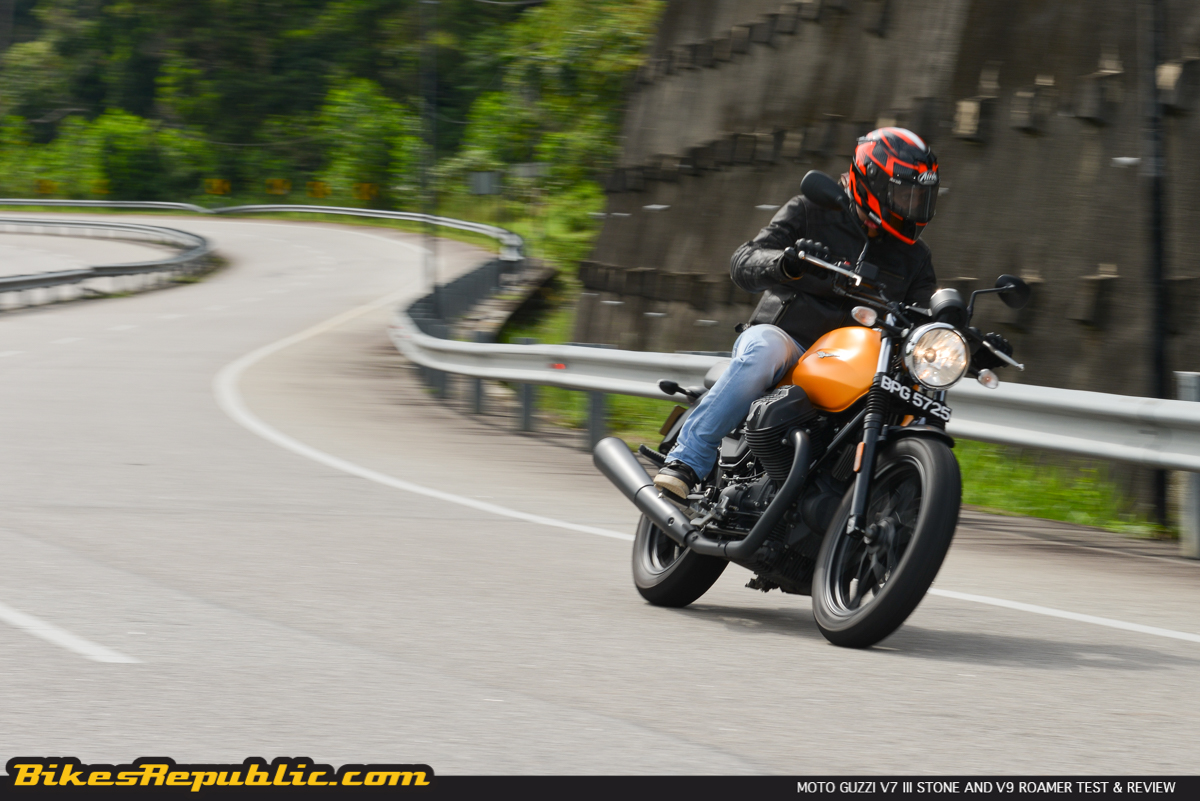 We took a different route to Kuala Kubu Bahru for the photoshoot and while it had many beautiful corners, certain sections were bumpy as hell, but these bumps were handled better as long as they weren’t sharp, whereas I would have a chiropractor on standby on the older bike. 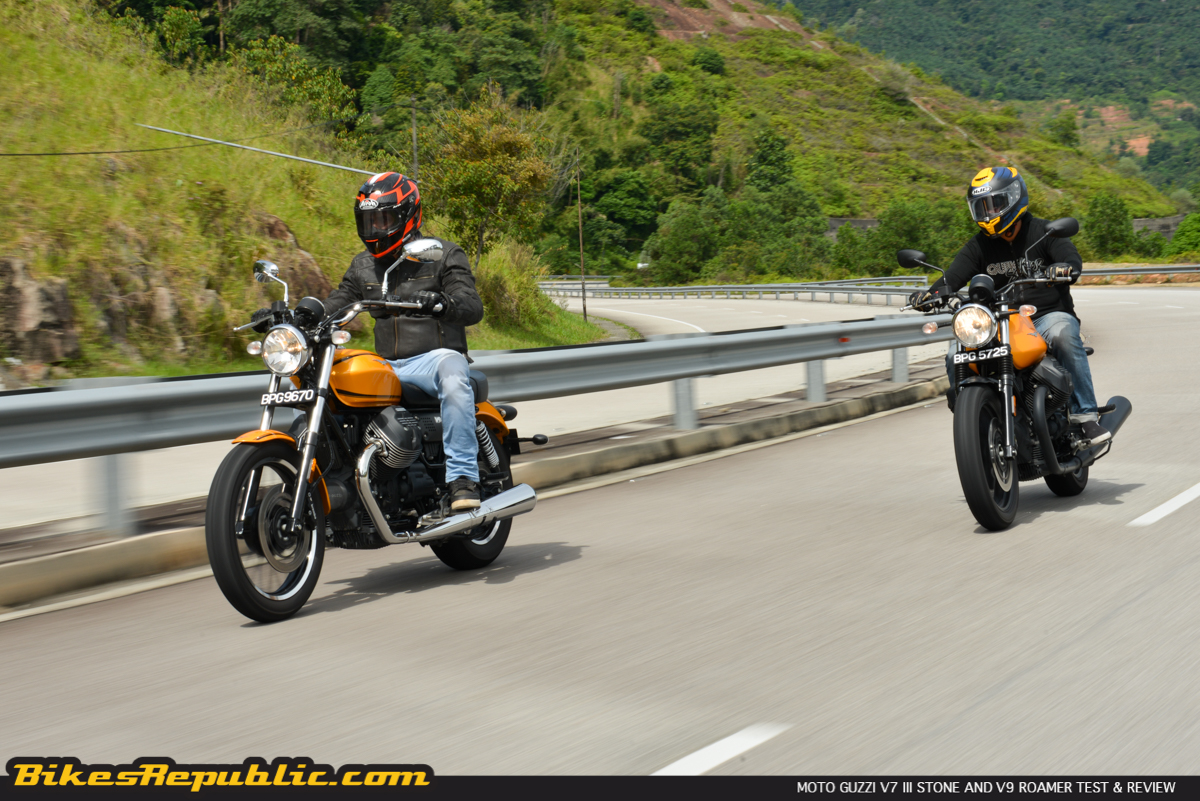 We also noticed that there wasn’t any “shaft jacking” despite the lack of an extra arm, like Moto Guzzi’s CARC setup. The term shaft jacking pertains to the bike lifting upwards due to the shaft’s torque as power is applied to the rear wheel. 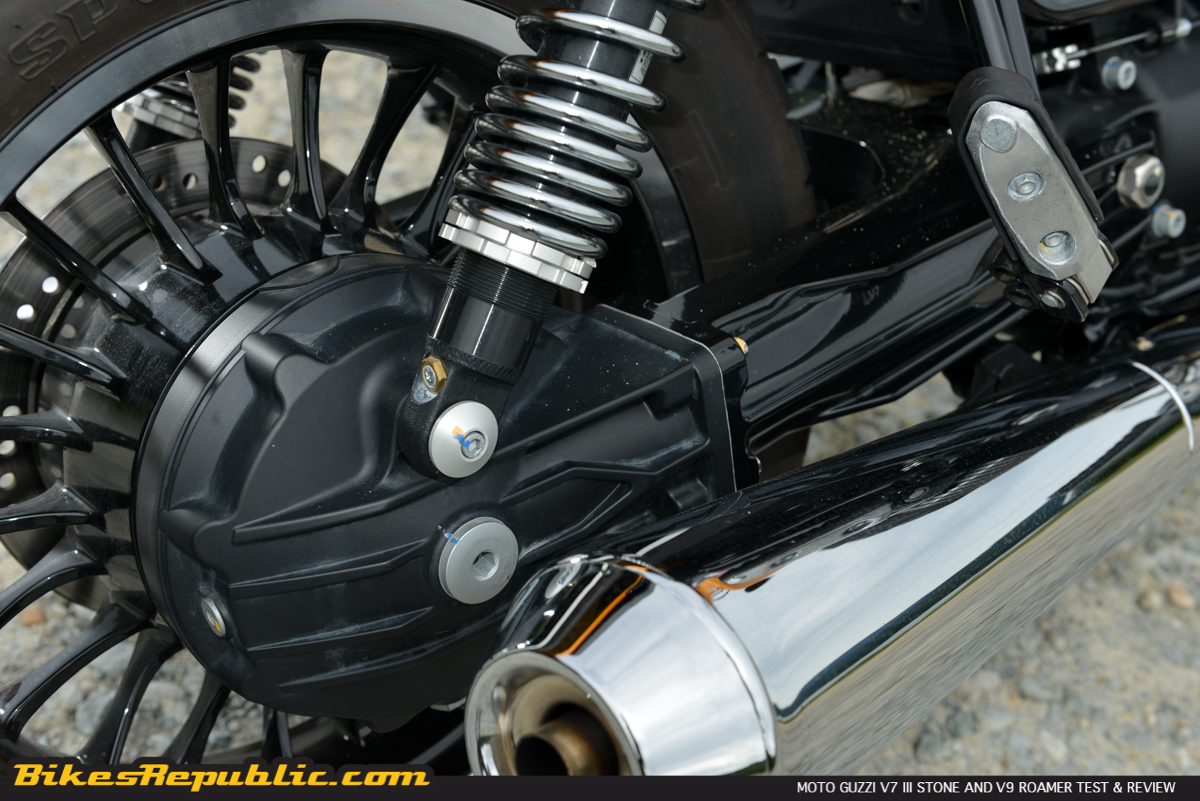 As our four days with both bikes coming to an end, we liked both the V9 Roamer and V7 III Stone for what they are. They’re just different from other bikes in the market, hence to compare with other makes may not be fair. Both bikes’ appeal rest in the ease of riding them, with a certain kind of soul that could only come from the transversely mounted V-Twin. Besides that, there aren’t many Guzzis around so you’ll earn plenty of inquisitive stares when you ride one. 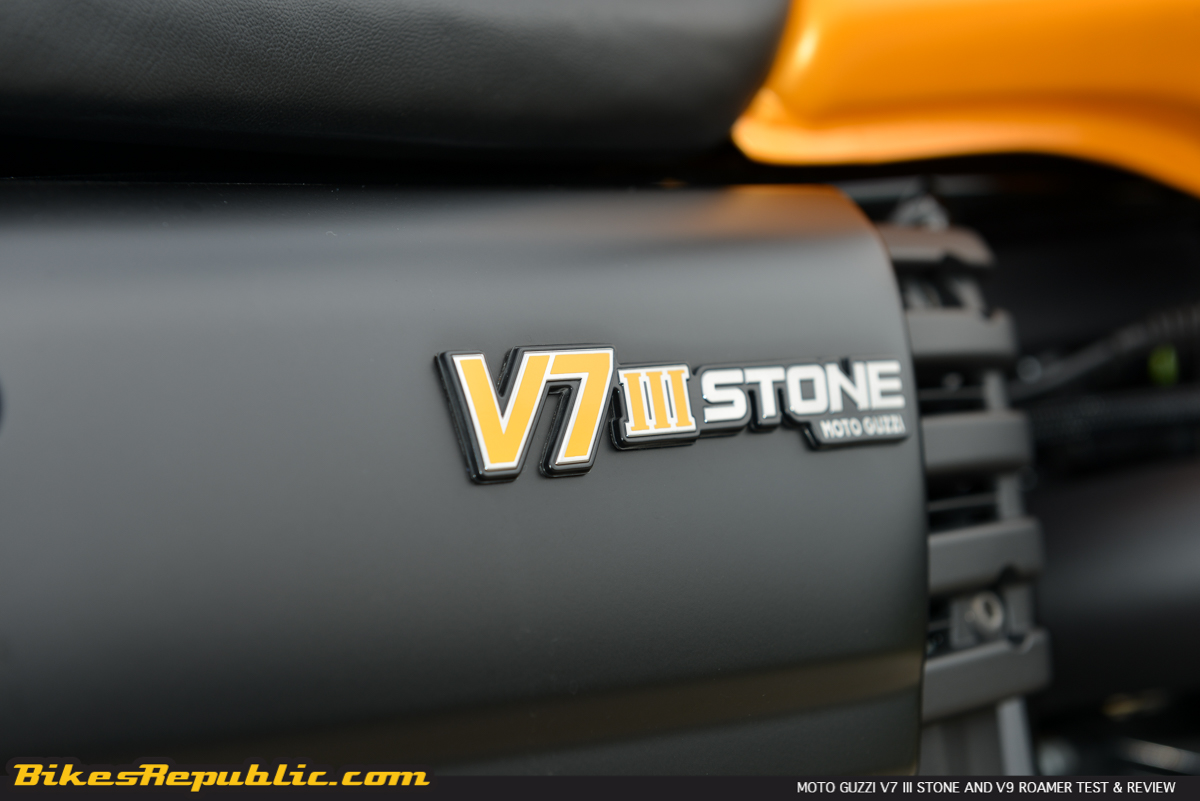 So which one did we pick as our favourite? Let’s call it a split decision. Keshy and Sep chose the V7 III Stone for its no-frills approach, while Chaze and I chose the V9 Roamer for its looks and soft character.