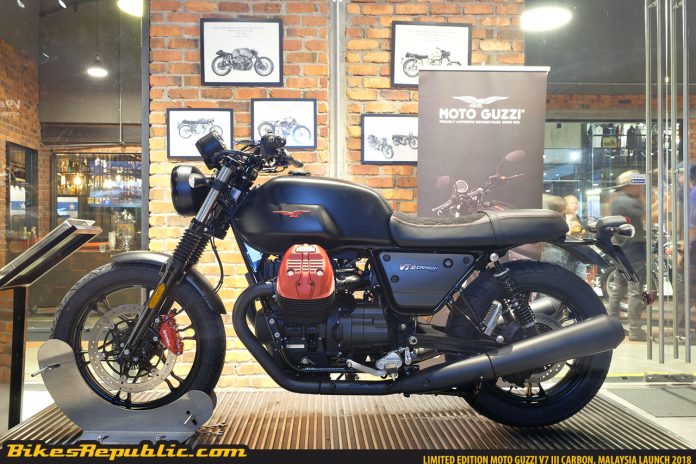 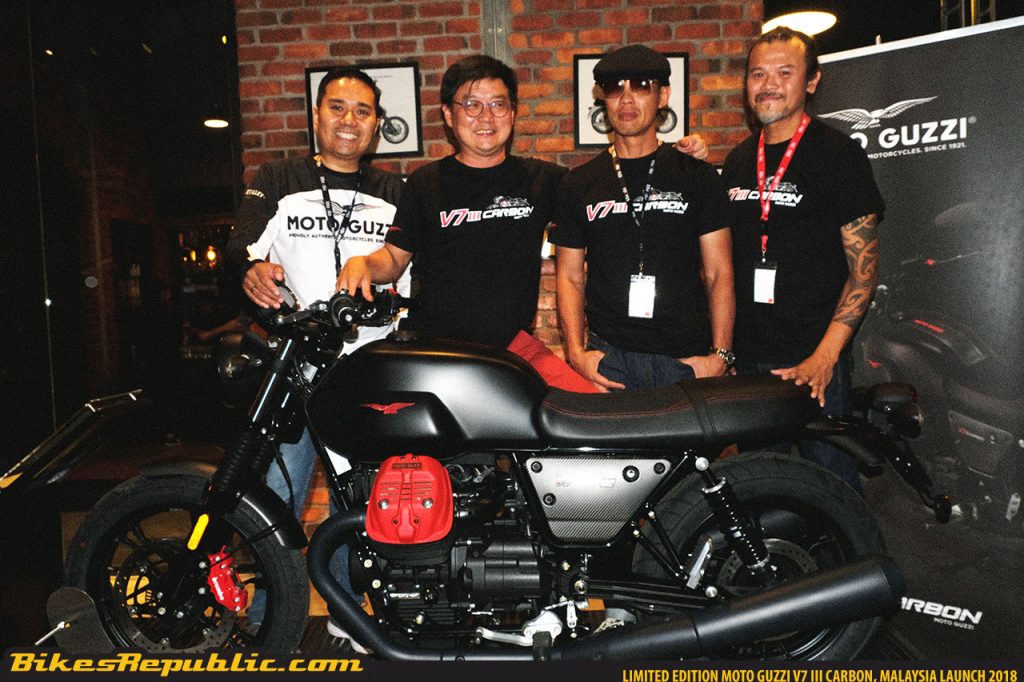 The Carbon variant, which was introduced at the Moto Guzzi showroom at The Gasket Alley in Petaling Jaya, is distinguished by its carbon fibre components such as the shortened fenders and side fairings, as well as the Matt black colour with red contrasting highlights on the engine cover, logo and front brake caliper. 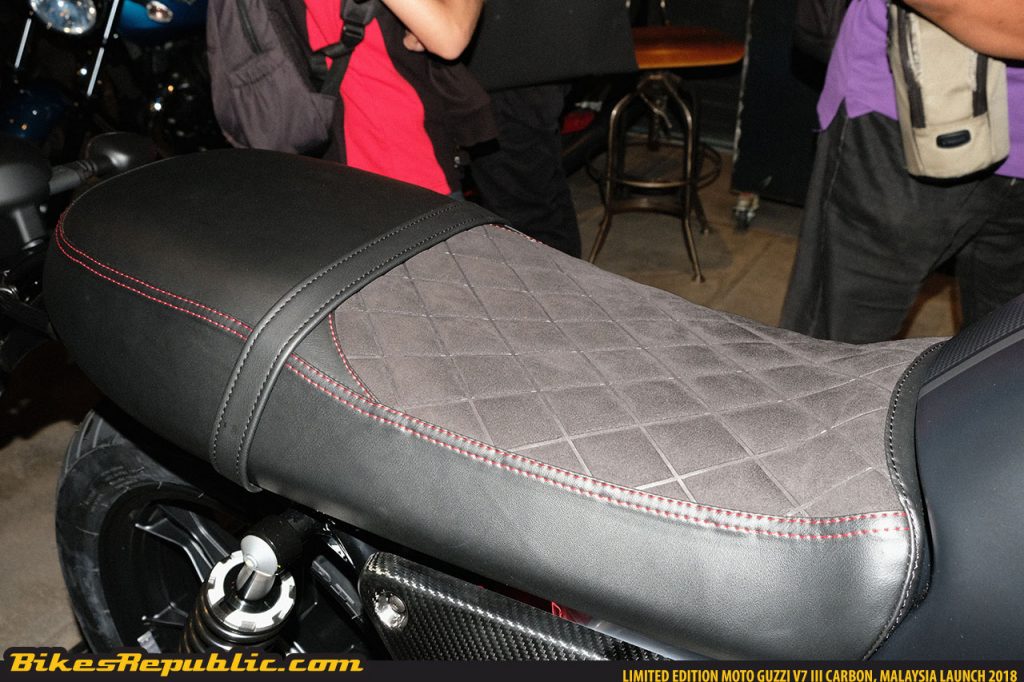 The seat (above) is also unique to the Carbon model and is made of water repellent Alcantara, leather. It too features red highlight stitching as shown below. In fact, the carbon features many such unique features, such as the tank cap made of anodized black billet aluminum, headlight frame, injector covers and the rear brake master cylinder. 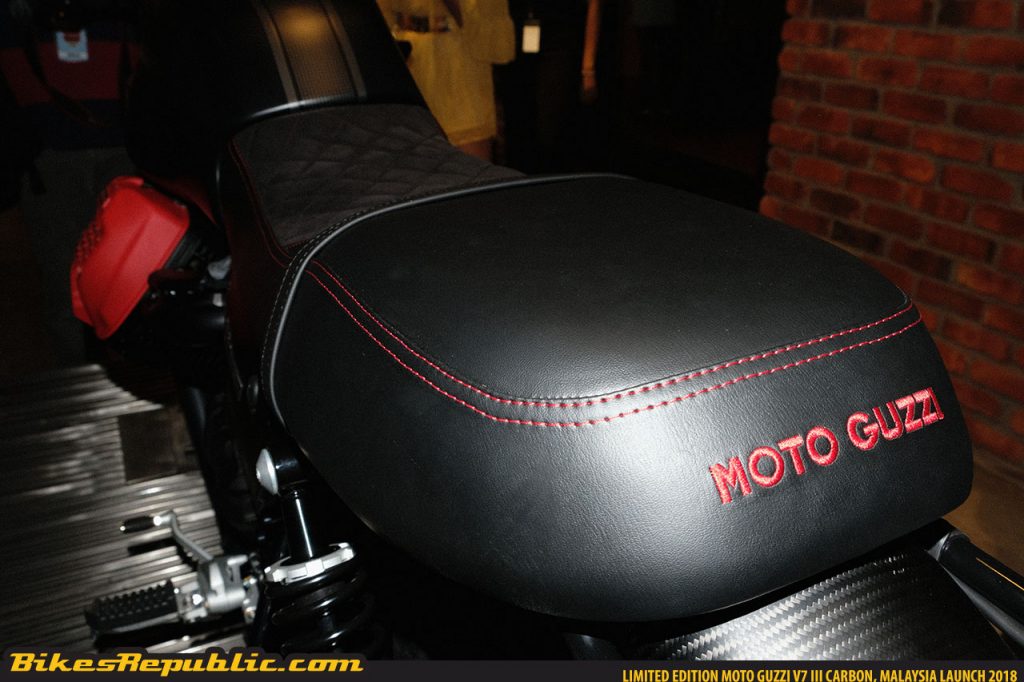 The Moto Guzzi V7 III Carbon is made in limited number, 1921 to be exact, a number that recalls the year Moto Guzzi was established. 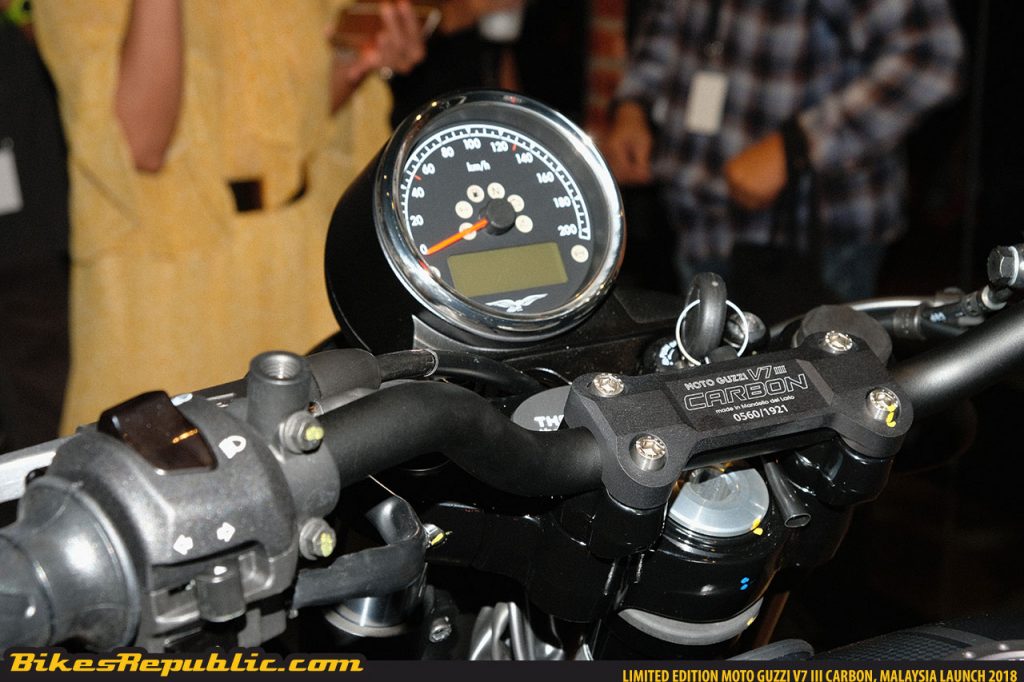 The series number of the model is identified by the plate on the handlebar riders as shown above. Also shown above is the dedicated single circular display, which is typical of variants such as the V7 III Stone, Rough and the Carbon. The V7 III Special, Racer and Milano variants on the other hand, have a second circular display for the rev counter. 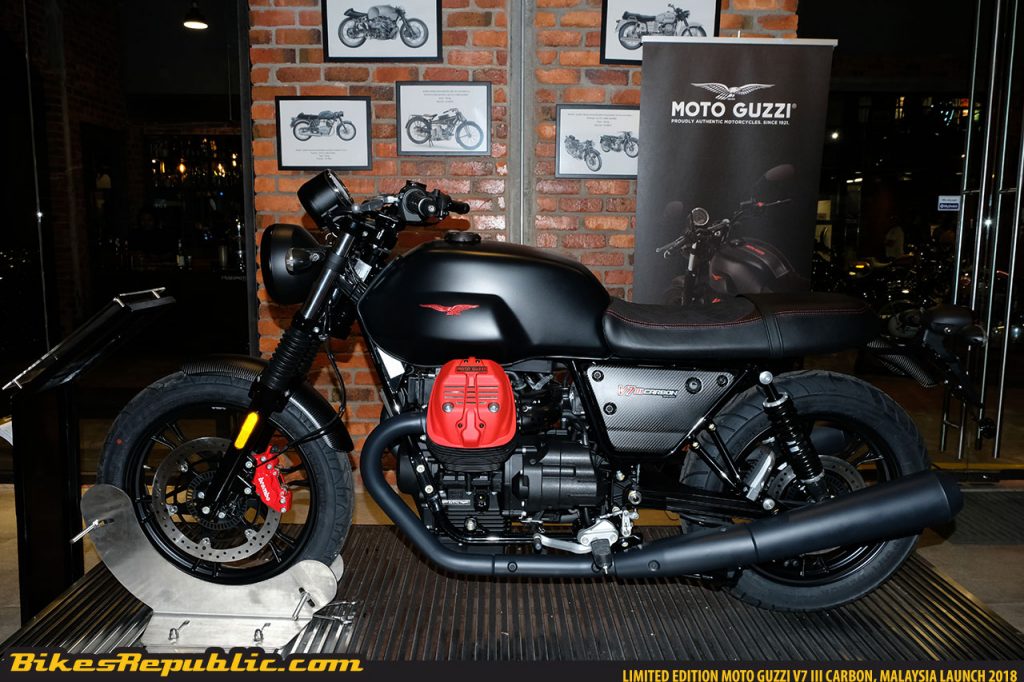 At the heart of this Carbon model is a transversal V-twin engine, which is now in its third iteration since the original engine was first introduced back in 1967. The 744cc engine features twin valves with light allow pushrods and rockers as well as aluminium heads, pistons and cylinders that help to generate 52hp at 6200rpm and 60Nm of torque at 4900rpm. 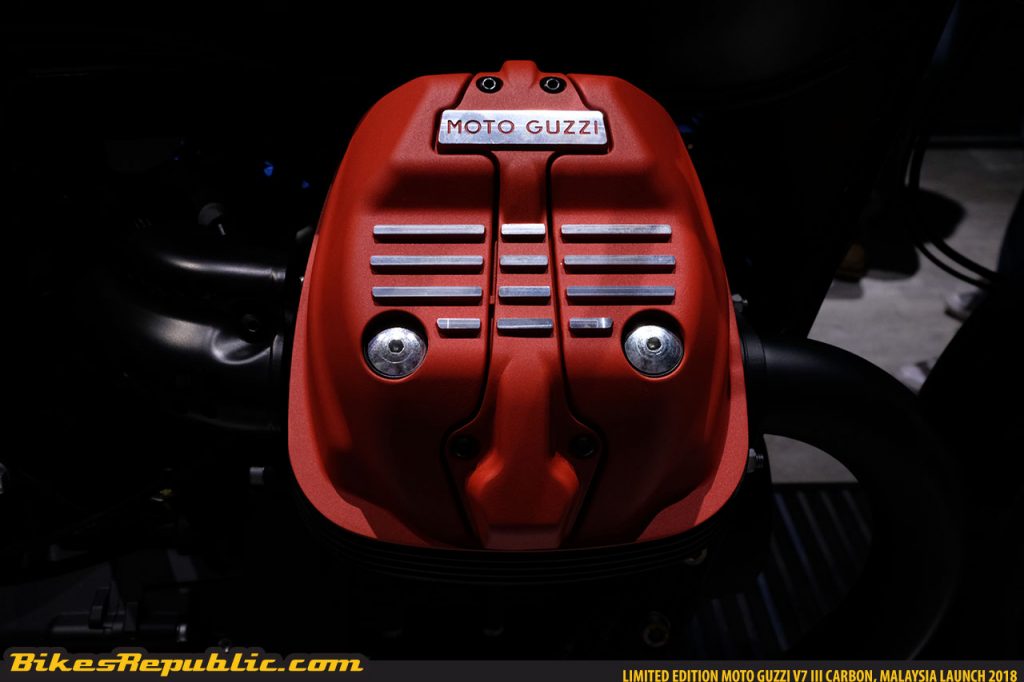 Power is transferred via a six-speed transmission which was first introduced in the V7 II model, but with an updated, longer first and final gear ratio that are able to fully exploit the torque and power of the engine. 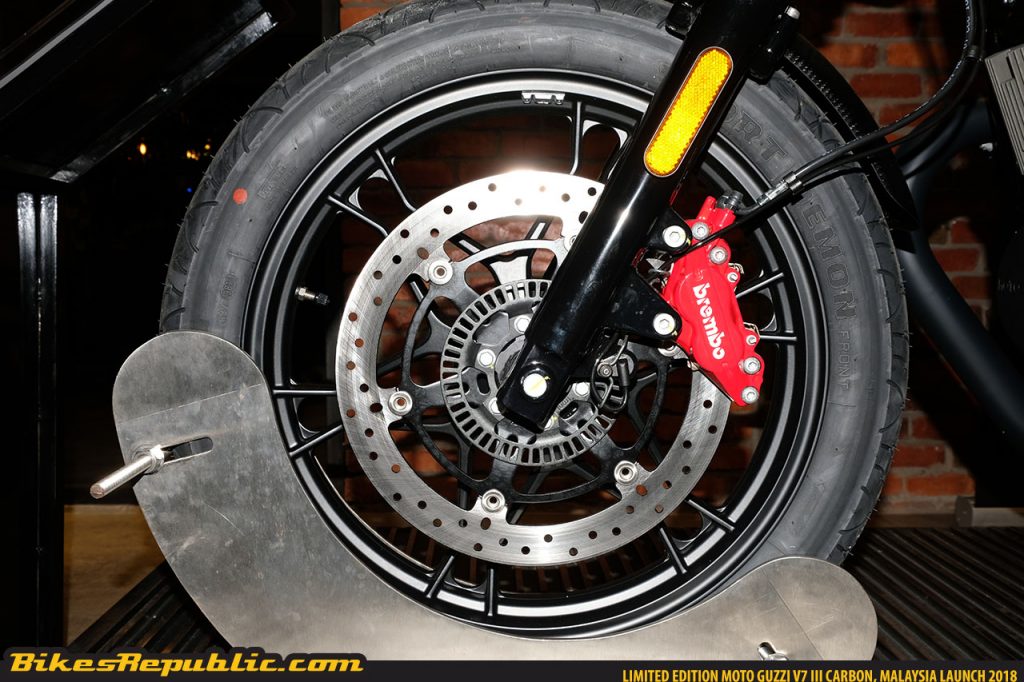 On the safety front, the V7 III Carbon comes equipped with a four-pot Brembo caliper up front gripping a 320mm disc brake, ABS braking as well as an adjustable traction control system called the Moto Guzzi Traction Control system, which can be adjusted to two sensitivity levels or turned off entirely. The rear brake consists of a 260mm disc with a twin-pot caliper and a master cylinder with built-in resorvoir. 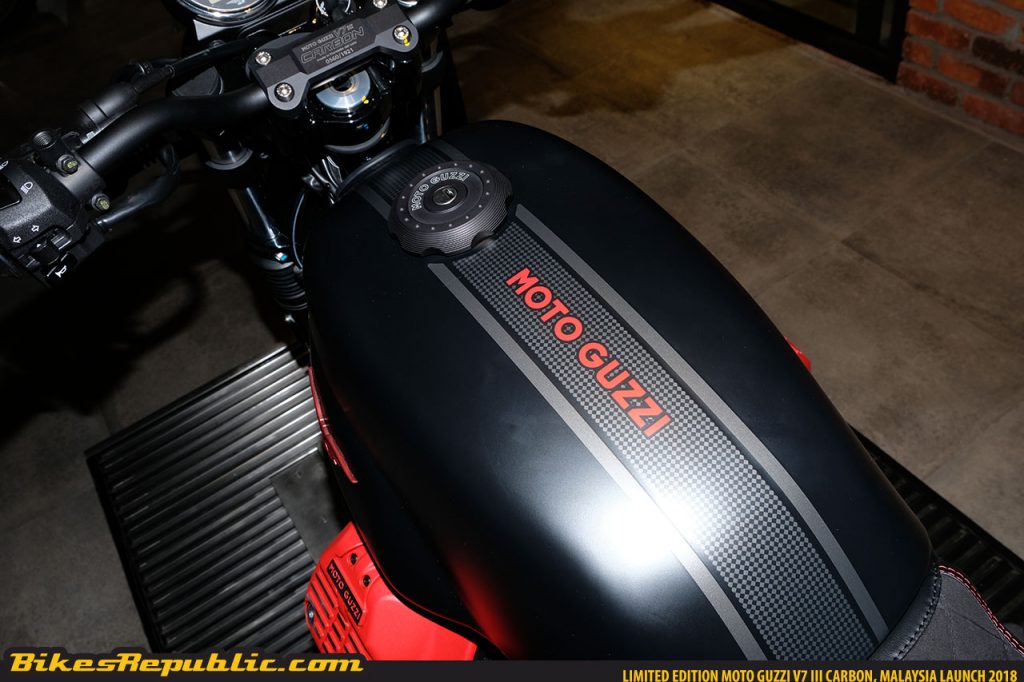 As for the handling of the bike, the sitting position is commanding which is typical of modern-retro machines. The steel frame and the completely reworked front end of the third generation variant of the V7 is said to give the bike a steady feel at high speed and in corners. 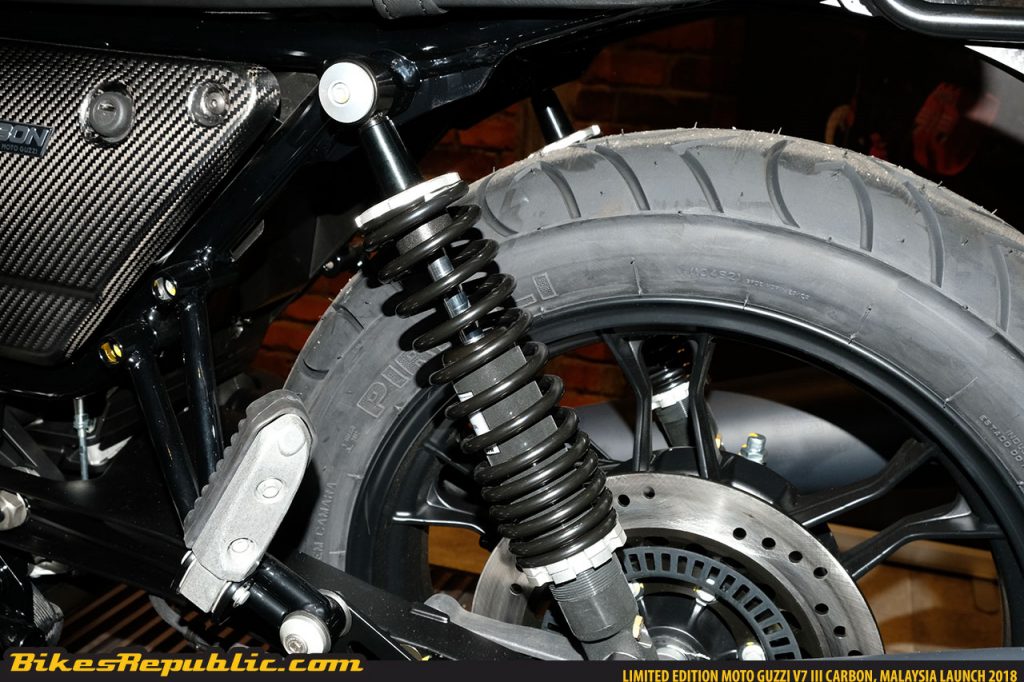 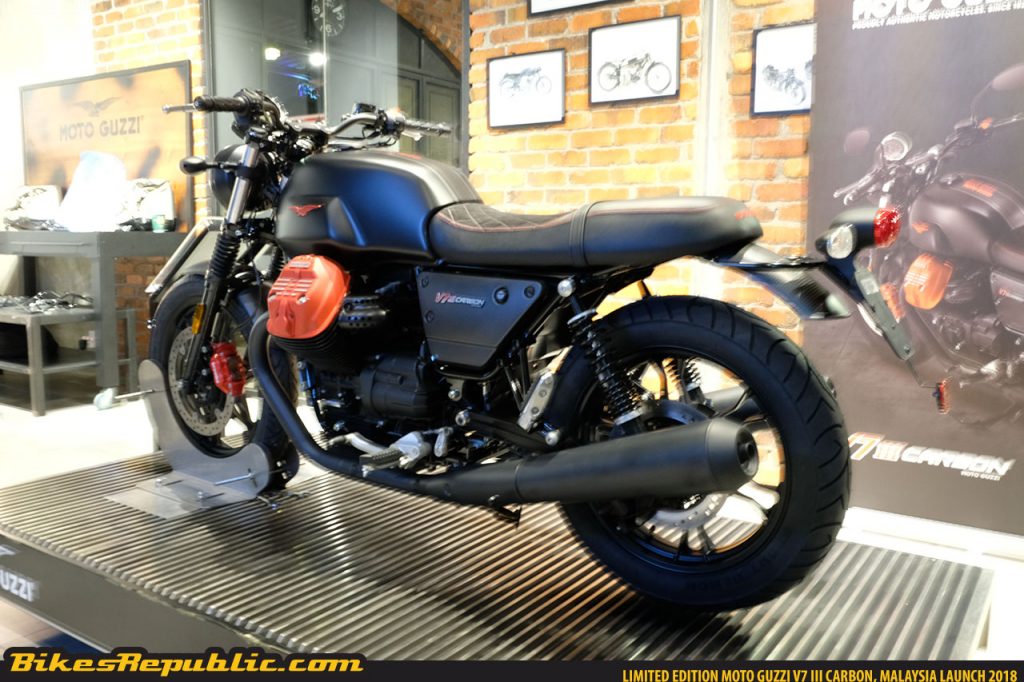 The limited-edition Moto Guzzi V7 III Carbon is priced at RM74,900 and is now available for viewing at the Moto Guzzi showroom at The Gasket Alley in Petaling Jaya.