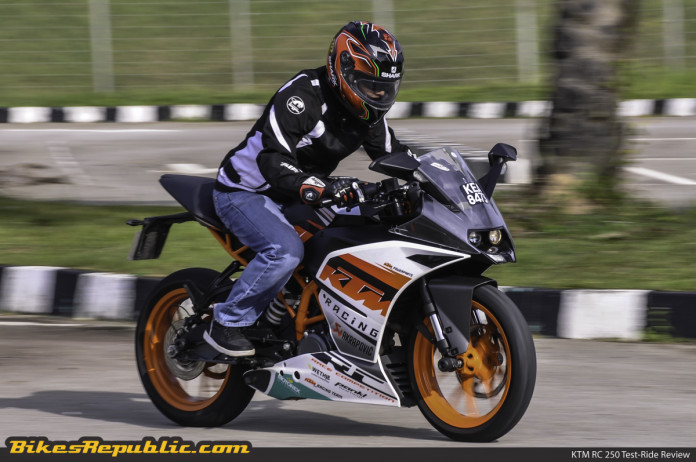 We put the KTM RC 250 through its paces over a week to see how it fares as both a commuter and weekend toy. 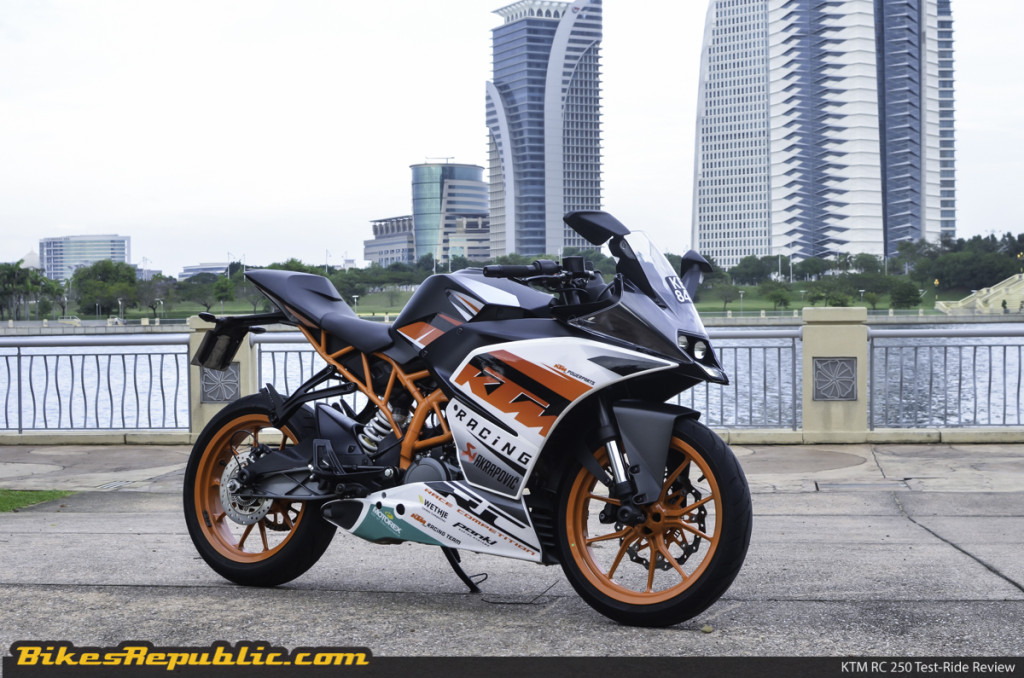 It goes without saying that KTM bikes, especially its small capacity and locally assembled (CKD) models, have become extremely popular on our soil. However, there was just one problem for many Malaysians: you technically needed a B-Full class license to own the desirable two in the range, which is the 390 Duke and its RC 390 sibling.

With both sharing the same 373cc single-cylinder engine, its capacity above 250cc meant that B2 class license holders were limited to just the 200 Duke or RC 200 that shared a ’tiny’ 199cc single-cylinder unit. Needless to say, the 200 series were no match against the onslaught of 250cc single-cylinder machines made by the rivalling Japanese brigade. 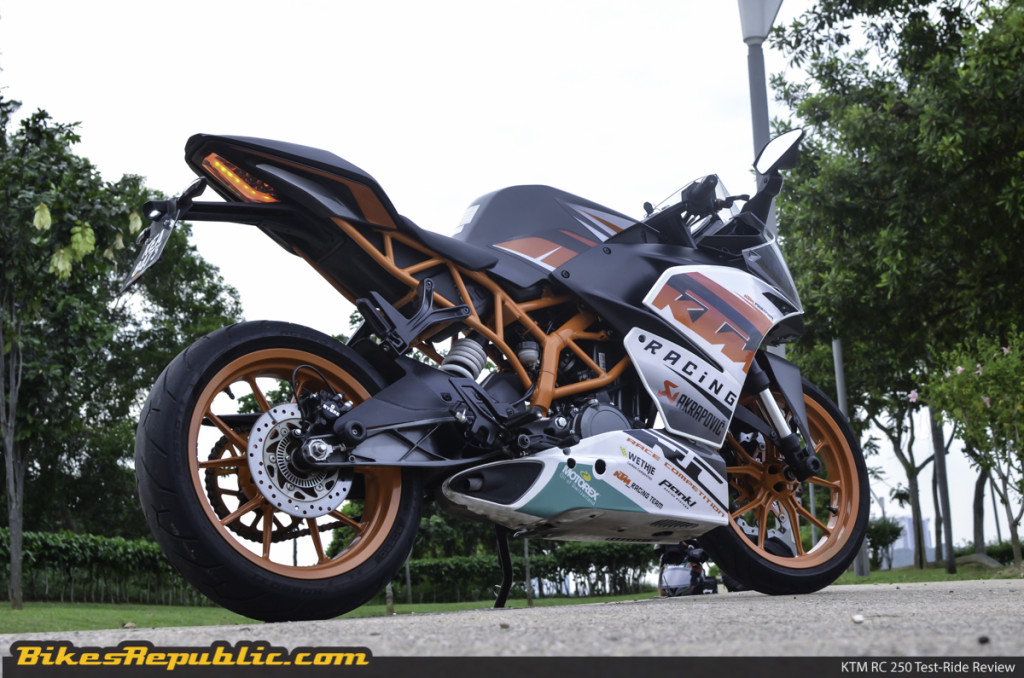 Thankfully, that situation changed drastically not too long ago when KTM Malaysia officially introduced the RC 250 and 250 Duke models. As far as many B2 license holders were concerned, their arrival finally gave them the chance to own and ride a proper European quarter-litre bike that not only looked good, but also promised better performance over its Japanese segment rivals. (Read our launch report here)

We recently spent a week test-riding the sport-bodied KTM RC 250 and here’s what we managed to garner out of it. 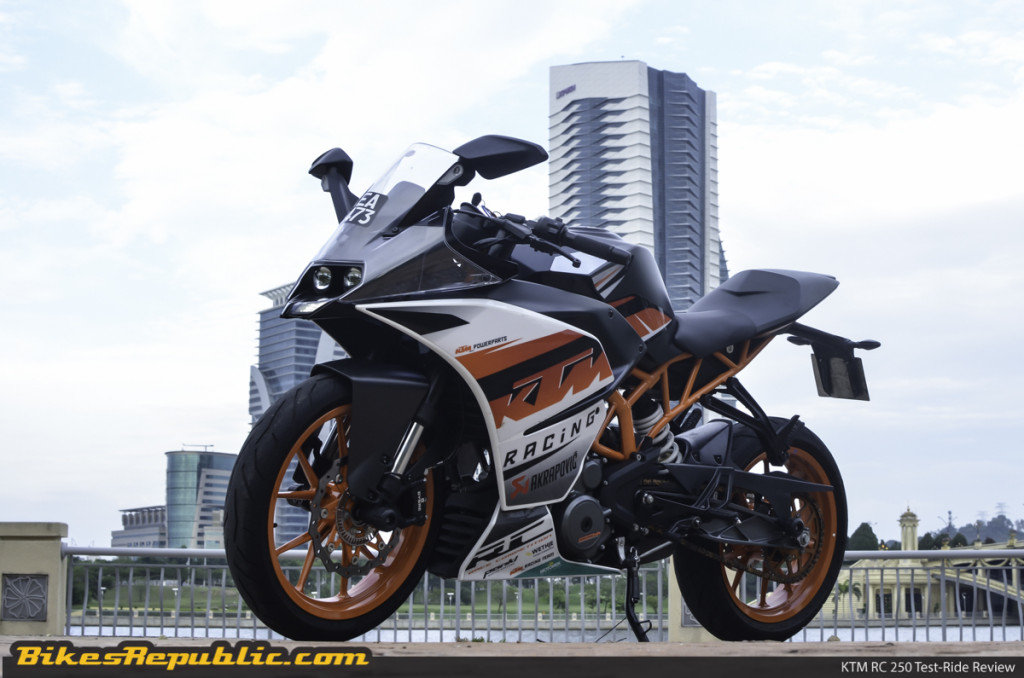 At first glance, the KTM RC 250 looks just like its RC 200 and RC 390 siblings, which isn’t a bad thing entirely. All the good parts from the other two remains unchanged in the RC 250, especially that distinctively modern and sharp styling language. Matching that are the equally impressive details such as the LED DRLs up front that complement the twin projector headlamps, plus the cool LED tail light unit at the rear as well. In short, this is one good-looking bike in the eyes of its target buyers – novice riders. 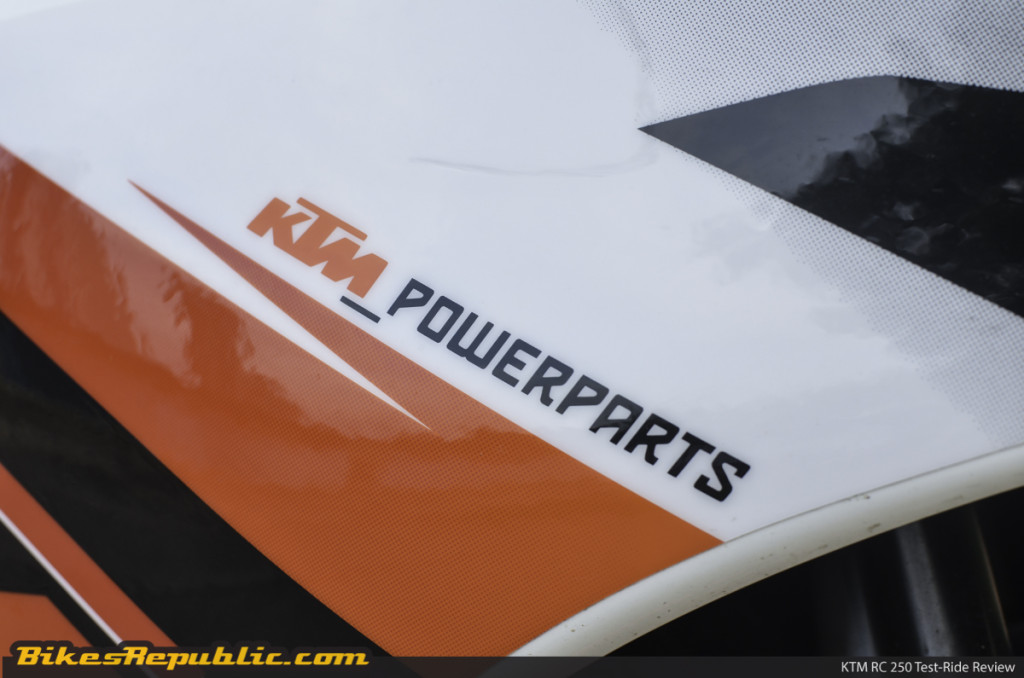 Eagle-eyed readers would already notice our test unit’s rich array of optional items from the KTM PowerParts catalogue. Highlights here besides the race graphics donned on the fairings include a pair of adjustable clutch and brake levers made of CNC-machined aluminium, followed by the wavy brake disc up front, as well as the larger sprocket and the colour-matched X-ring chain set. All of these were not bad to say the least, enhancing the bike’s basic outlooks further. 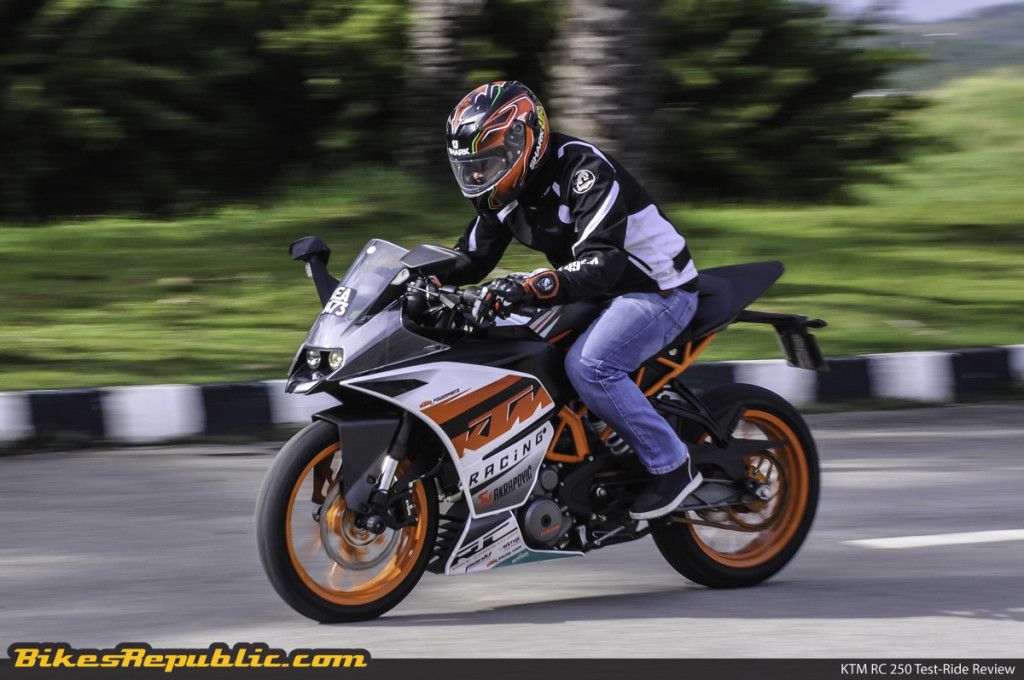 Also retained here from the RC 200 and RC 390 are the riding ergonomics and sitting position. Having tested the RC 390 previously, things felt the same in the hot seat of the RC 250. This being a sport-bodied bike with clip-on handles, swept back foot pegs and a tall seat height of 820mm, you will need to beef up with upper body muscles to don the typical sportbike crouch when riding the RC 250 up to speeds. (Read our previous special twin-test of the KTM RC 390 and 390 Duke here)

In our weeklong stint, we managed to put the KTM RC 250 through its paces across highways, twisty back roads and the urban traffic condition. Predictably, this bike showed its disadvantages almost immediately when tasked for the urban commute. 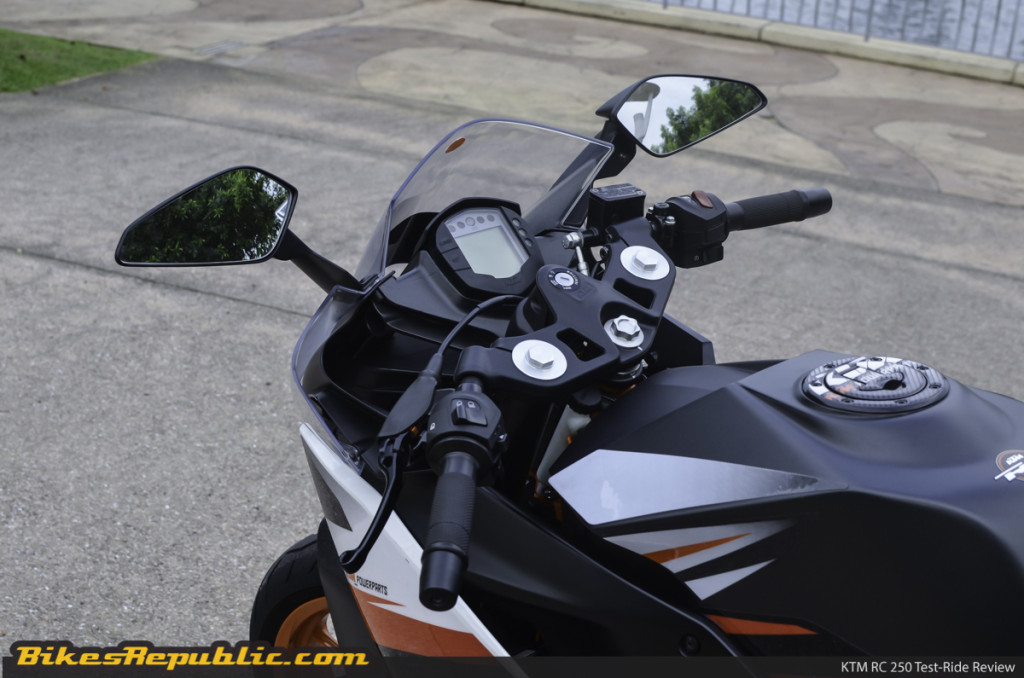 Besides the sport riding position, the tall seat sees shorter riders tiring out quicker from having to tip toe on the bike at stops, not to mention this bike’s harder setup dialled into the WP suspension primed all-round, making you dread the sight of potholes and road imperfections. As far as city riding goes, this is still best left for any of the Duke naked bikes as their upright riding position and standard ergonomics makes said task a lot easier.

For the RC 250, it actually shines better when taken for blasts through highways and twisty backroads, feeling truly at home in the latter. With its dry weight of just 147kg and adequate ground clearance of 178.5mm, the KTM RC 250 is a natural born lean, mean, orange cornering machine, making this highly chuck-able bike a perfect platform to master your knee-down techniques. It really lives up to the Austrian brand’s motto of “Ready>>To>>Race” straight out of the box.

What adds to this bike’s high agility besides the grippy Pirelli Rosso II tyres is that wavy front brake disc option. Swapping from the stock 300mm disc to the larger 320mm wavy disc unit is a sound move as it matches well with the quad-piston caliper primed up front. As a result, both stopping power and braking abilities felt noticeably better too. 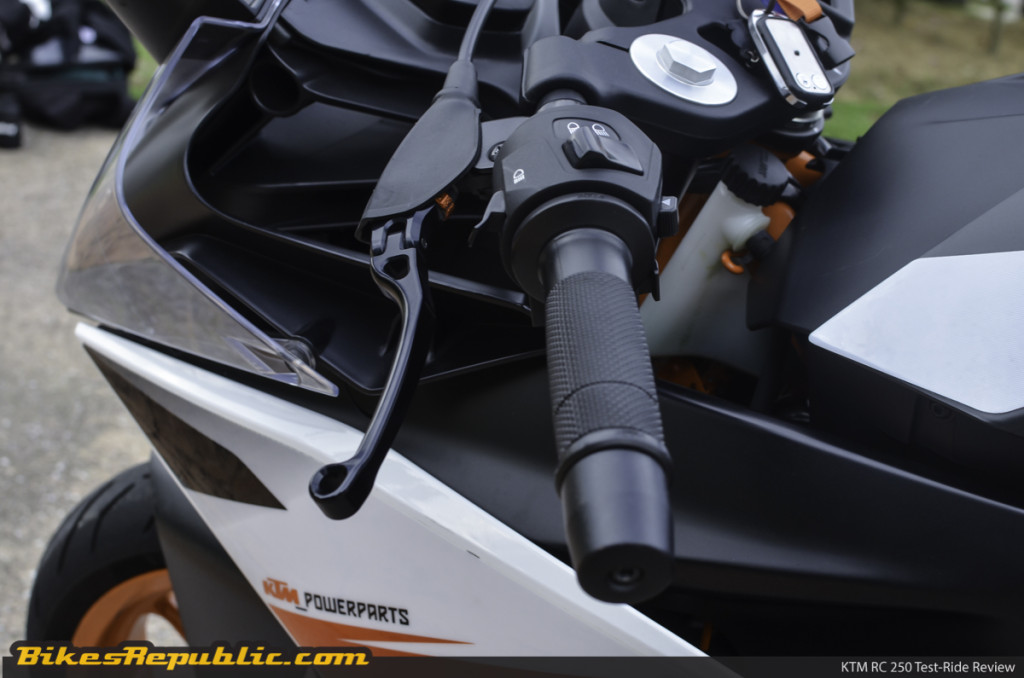 Rounding off the braking suite is a standard-equipped Bosch two-channel ABS system. The suite does feel a tad spongy with its lever pull, but the catalogue’s adjustable CNC-machined aluminium levers allows you to combat this easily too. Nevertheless, the presence of ABS also feeds a greater sense of security and safety as it offers better control under braking.

Perhaps the only let down here is the RC 250’s liquid-cooled 249cc single-cylinder engine sitting underneath those stylish fairings. The mill is essentially a downsized version of the 390 series’ 373cc unit, which KTM developed specifically for markets with laws that favoured the quarter-litre capacity. 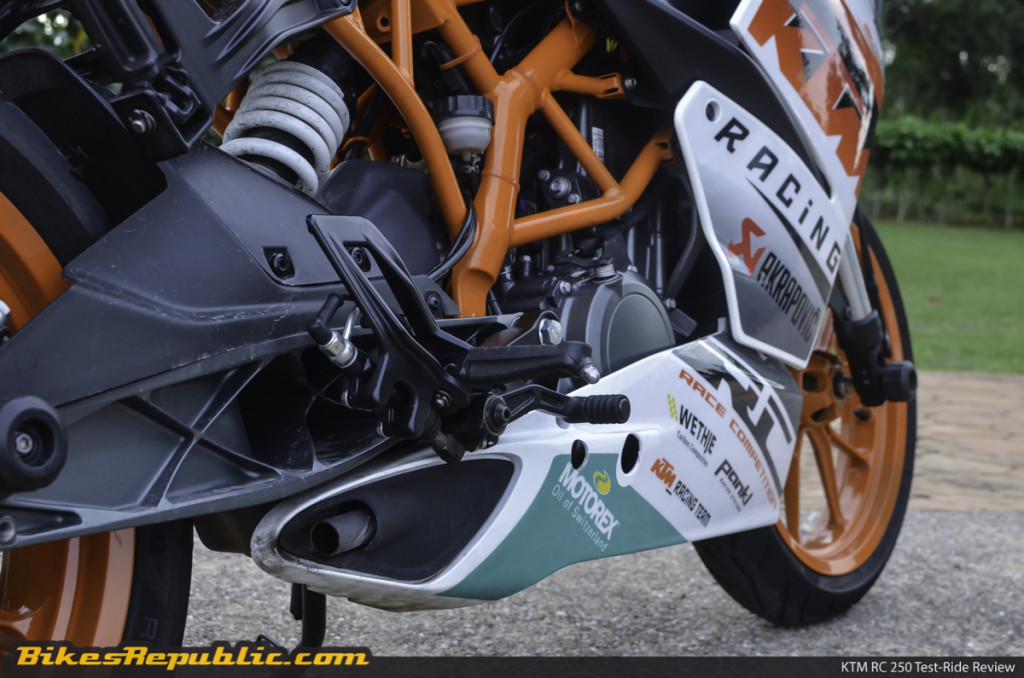 Yes, it healthily develops 31hp @ 9,000rpm and peak torque of 24Nm at 7,250rpm, but the delivery is somewhat subdued compared against some of its Japanese peers. We also need not mention that embarrassing puttering soundtrack of this single-cylinder’s exhaust note. Nevertheless, we reckon the Akrapovič exhaust system available in the KTM PowerParts menu will resolve this easily, provided you don’t mind the extra cost of course.

Unlike the 390 series’ larger mill, the RC 250’s 249cc unit lacked that big punch of torque in the low rev-ranges. Furthermore, peak power comes only in the top-end of the rev-band, which is rather typical of a single-cylinder unit. Thankfully, the larger sprocket from the KTM PowerParts range means sustaining high-speeds is made easier, making said component worthy of consideration. 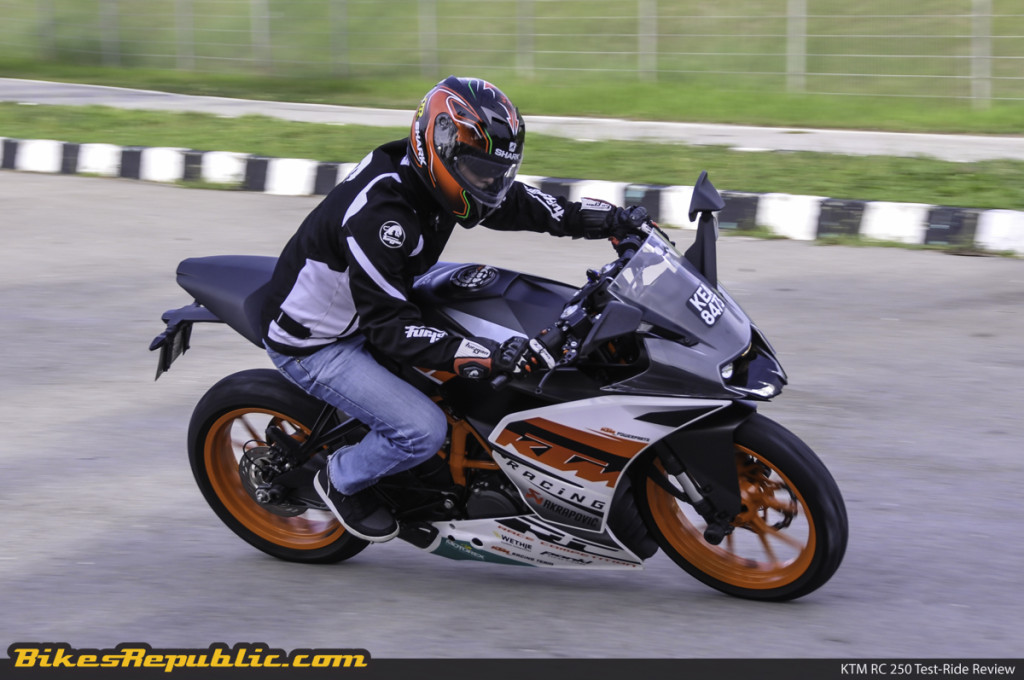 Despite these minor setbacks, this quarter-litre single-cylinder is remarkably easy to exploit and master. It not only trumps the smaller RC 200’s 199cc unit with greater power and torque figures, the six-speed transmission paired with it also boasts a PASC anti-hopping mechanical slipper clutch – a feature absent in the entry-level RC 200. No doubt, the clutch-less up- and down-shift capability made this RC 250 feel right at home when conquering twisty back roads, and we reckon it would feel the same during a trackday too. 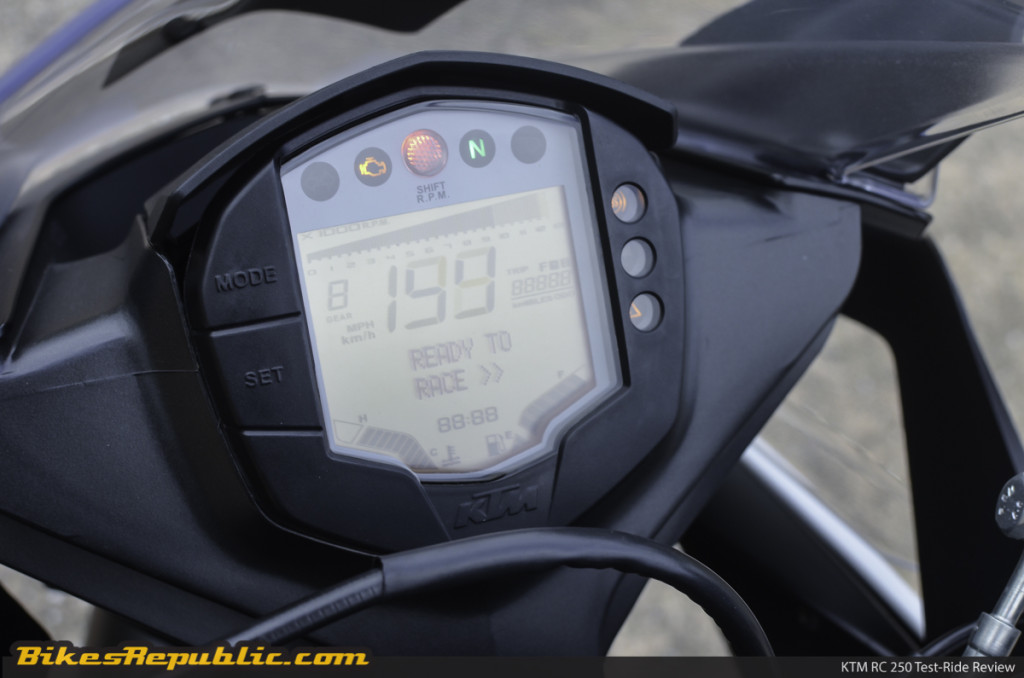 Adding to that, especially for novices, is that neat digital instrument display panel. Equipped across the range, the screen is easy to read even with just a quick glance. KTM cleverly placed the rev-counter bar to run across the top of the screen, followed by the large speedometer in the middle, not forgetting the all-important gear indicator just to the left of that – a feature many of the RC 250’s rivals still lack. The icing here is the shift light placed at the top that blinks rapidly as you approach the mill’s 11,000rpm red-line.

While it may lack a little in the power delivery department, the KTM RC 250’s mighty impressive list of standard features sees it eclipsing the bulk of its Japanese rivals. Match that with its highly nimble handling abilities and an affordable basic selling price tag of RM18,888* sans options, the KTM RC 250 is hard to resist for many eager newbies. 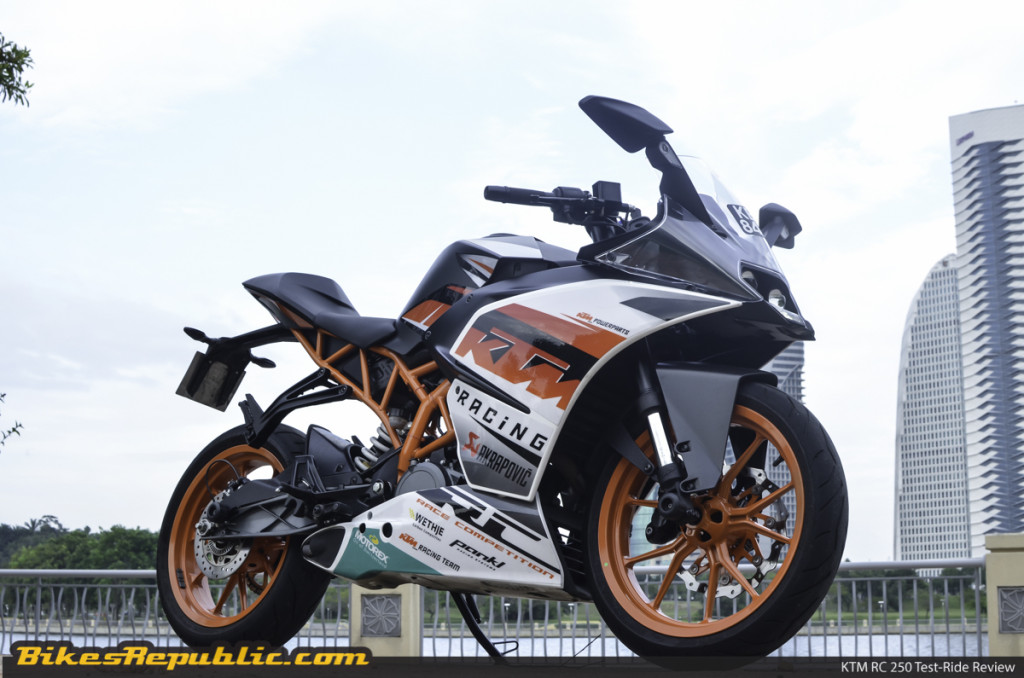 For us though, the RC 250’s minor drawbacks carry little consequences simply because of that magical ‘250cc’ figure. This means you don’t need to spend more money on upgrading to a B-Full license whilst the RC 250’s price tag sees you saving more than RM8,000 from the RC 390’s steeper RM27,500* price tag.

The only question left is how much one is willing to spend on the wide variety of parts and accessories available in the KTM PowerParts catalogue.

Check out more images of the KTM RC 250 in the extensive gallery we’ve prepared below.