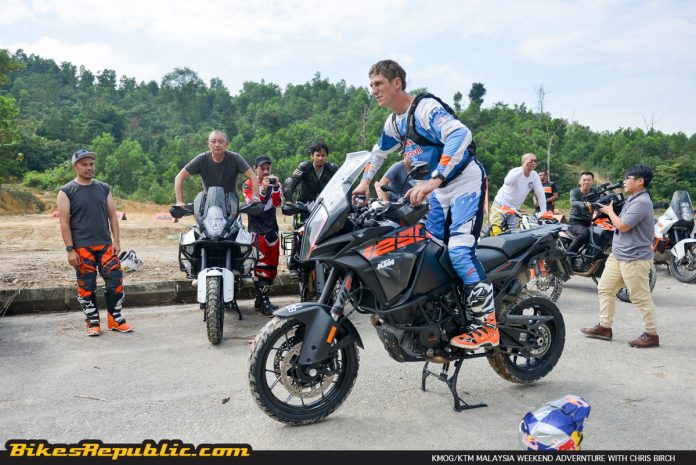 Stepping up their charter to bring the best to their members and customers, KTM Malaysia Owners’ Group (KMOG) and KTM Malaysia organized an off-road clinic and weekend adventure ride featuring the world’s enduro pro rider and coach extraordinaire, Chris Birch. 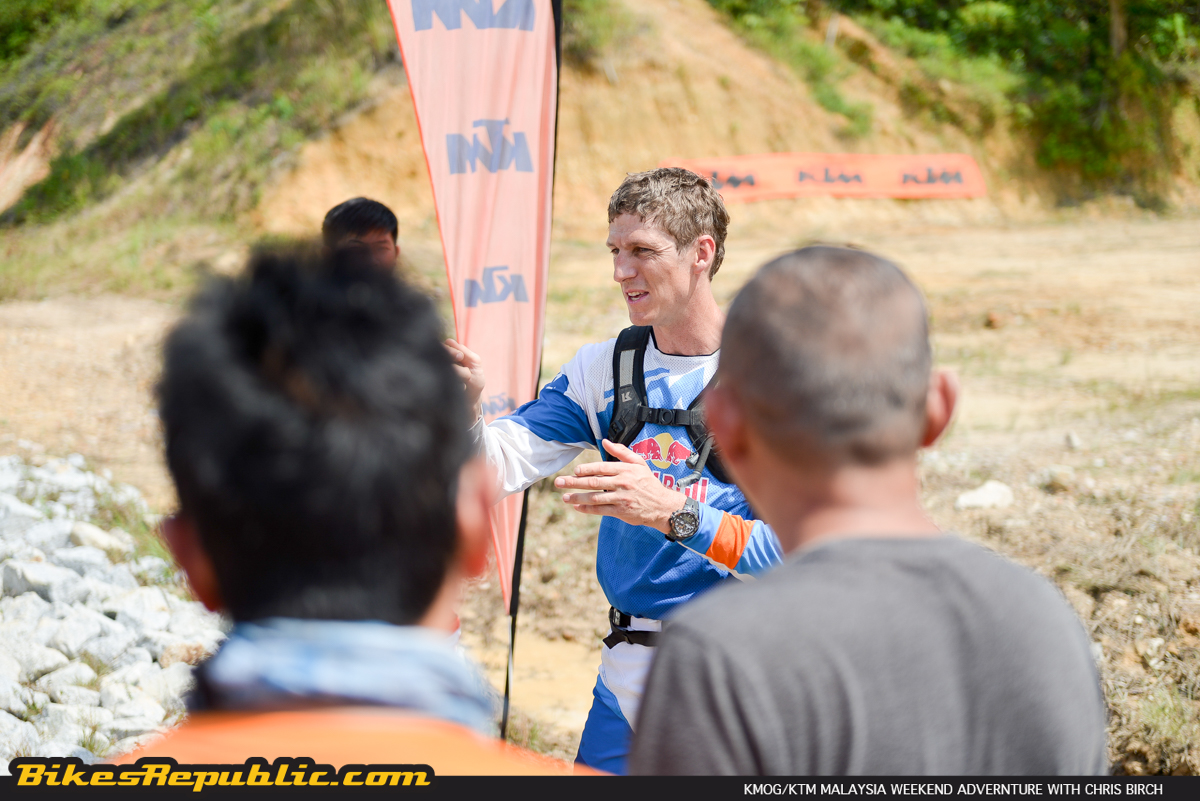 That’s one of the best thing about having a world champion as your brand’s factory rider. However, Chris Birch is of a different ilk which only a small number champions who could teach and impart his experience of many years effectively to plebeians like you and me. Besides that, Chris is still competing actively, ensuring that the experiences she shares aren’t from 1972.

The KMOG/KTM Malaysia Adventure Weekend with Chris Birch event drew at total of 20 participants. KTM Malaysia introduced Chris Birch and his assistant, Chris Whitehouse at Lifestyle Showroom in Kota Damansara to a rousing welcome. Many of the participants couldn’t help themselves but requesting for selfies and autographs with the “rock star.” 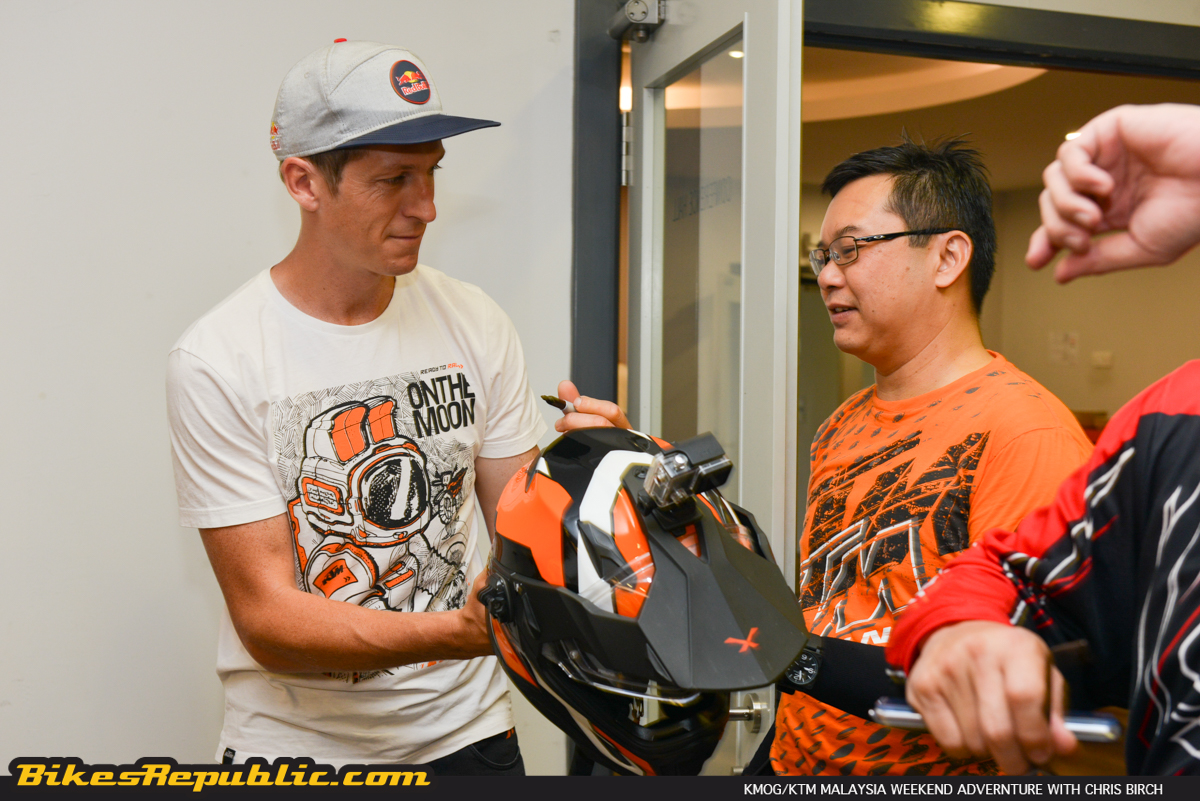 The Chris superduo introduced themselves and KTM Malaysia’s Nor Iman took over to brief the participants on the itinerary of the three-day program. We then mounted our bikes and rode to KTM Malaysia’s off-road and MX course in Sungai Buaya, Rawang. 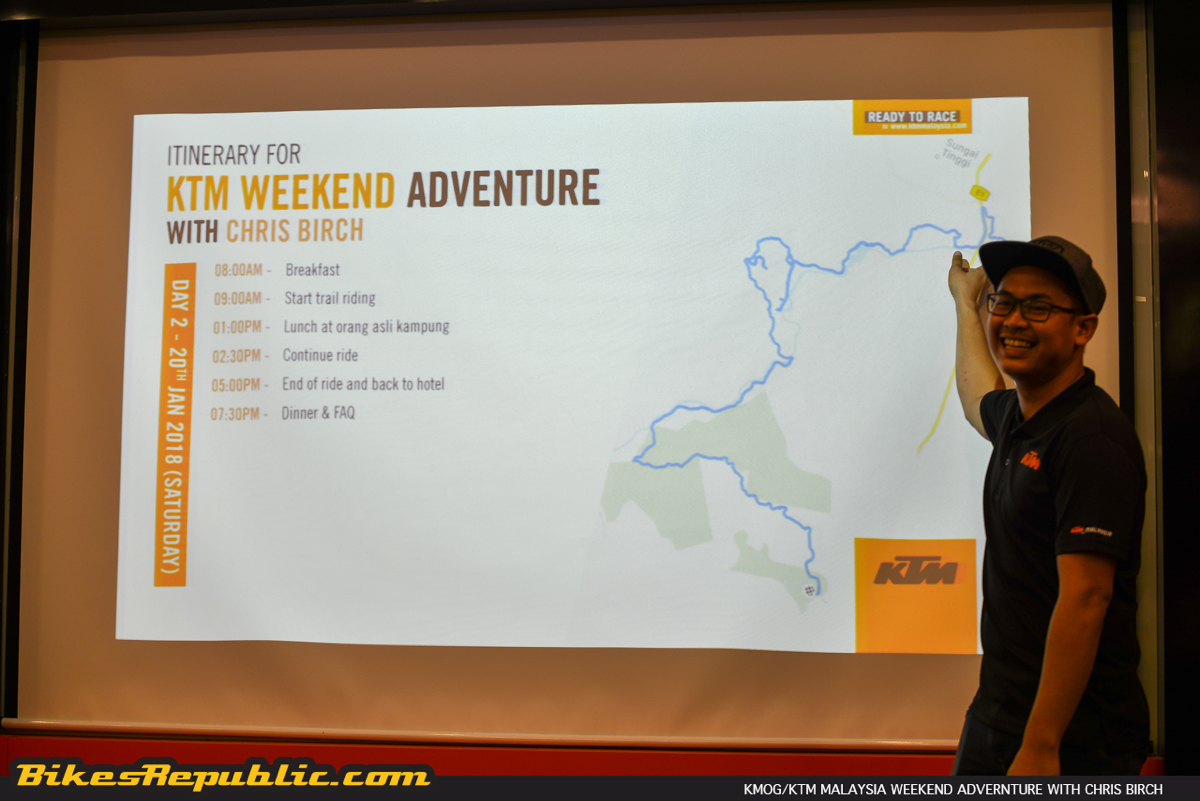 Day One consisted of a riding clinic coached by Chris (Birch) and assisted by Chris (Whitehouse). 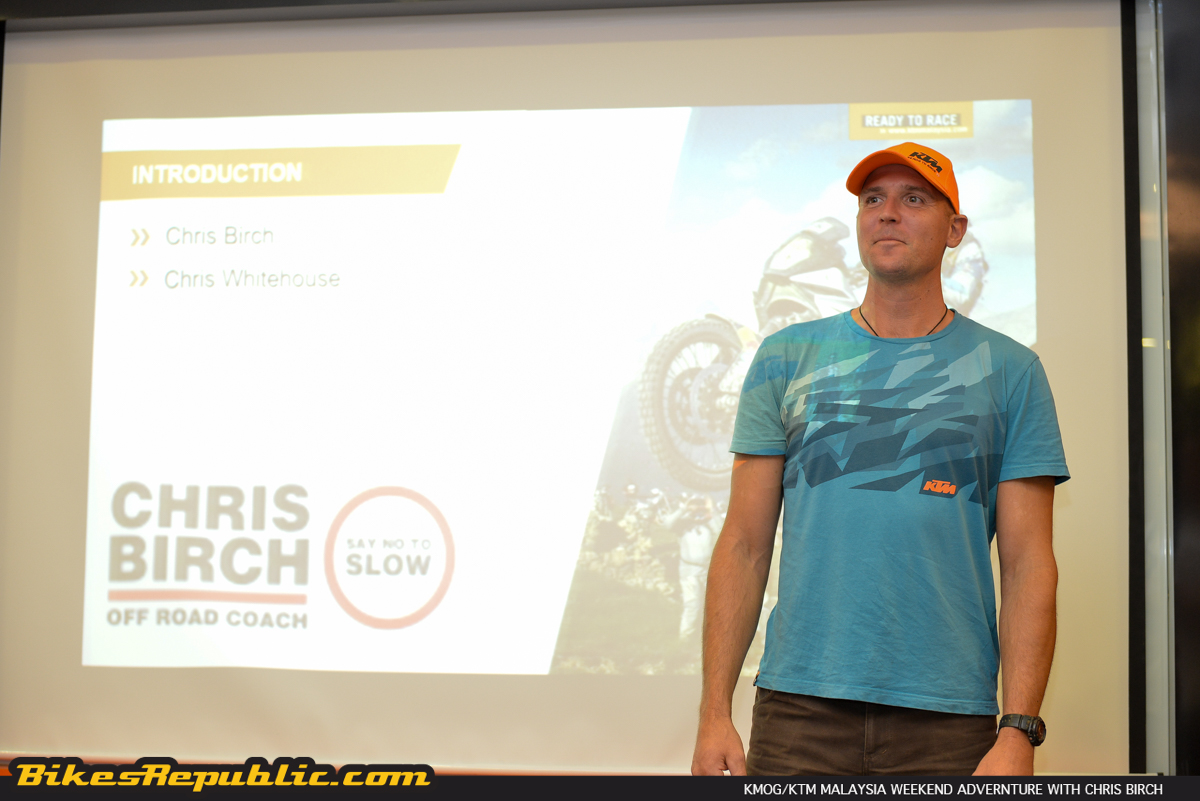 The first lesson taught by Chris was on setting up the bike for offroading. The bike’s controls such as the handlebar, hand levers and foot levers were adjusted to offer better accessibility while riding. 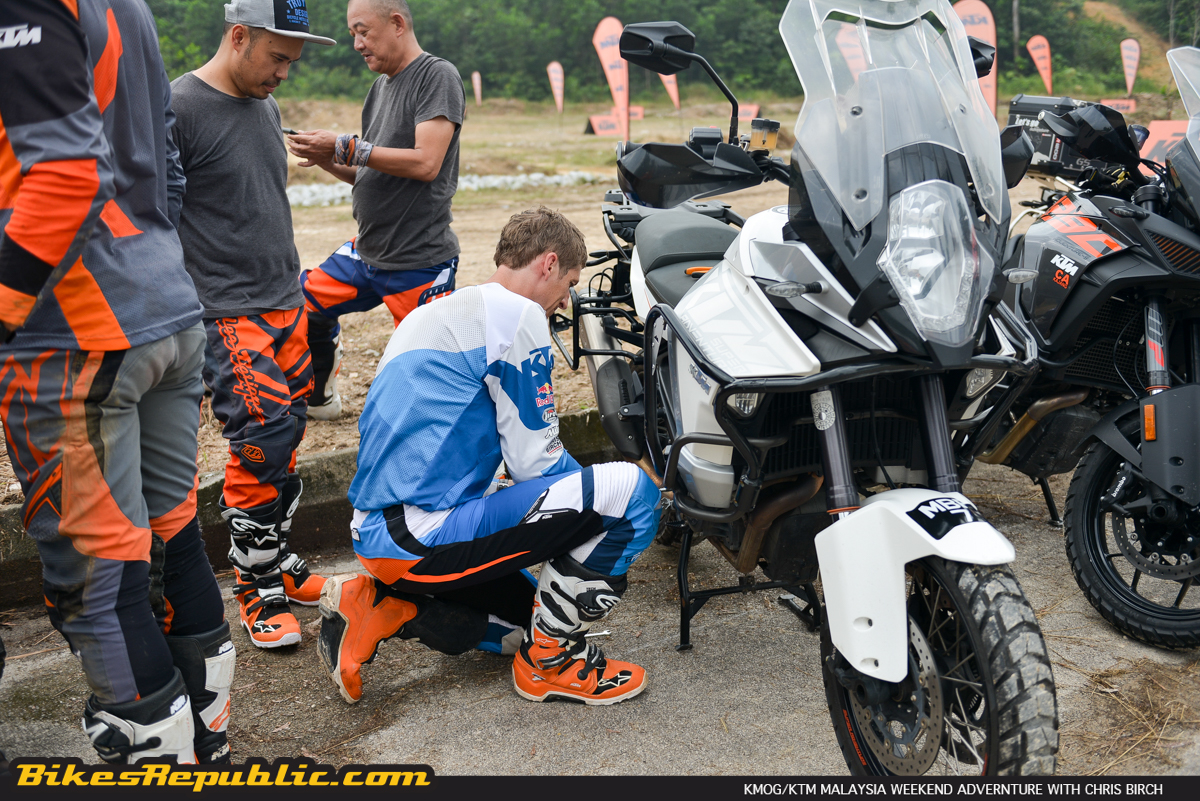 Chris also shared his experience about using the correct tyre pressures for offroad duty. He then adjourned the students to perform the necessary adjustments, but instead of standing by and lording over them, Chris and Whitehouse actually got their hands dirty to assist. 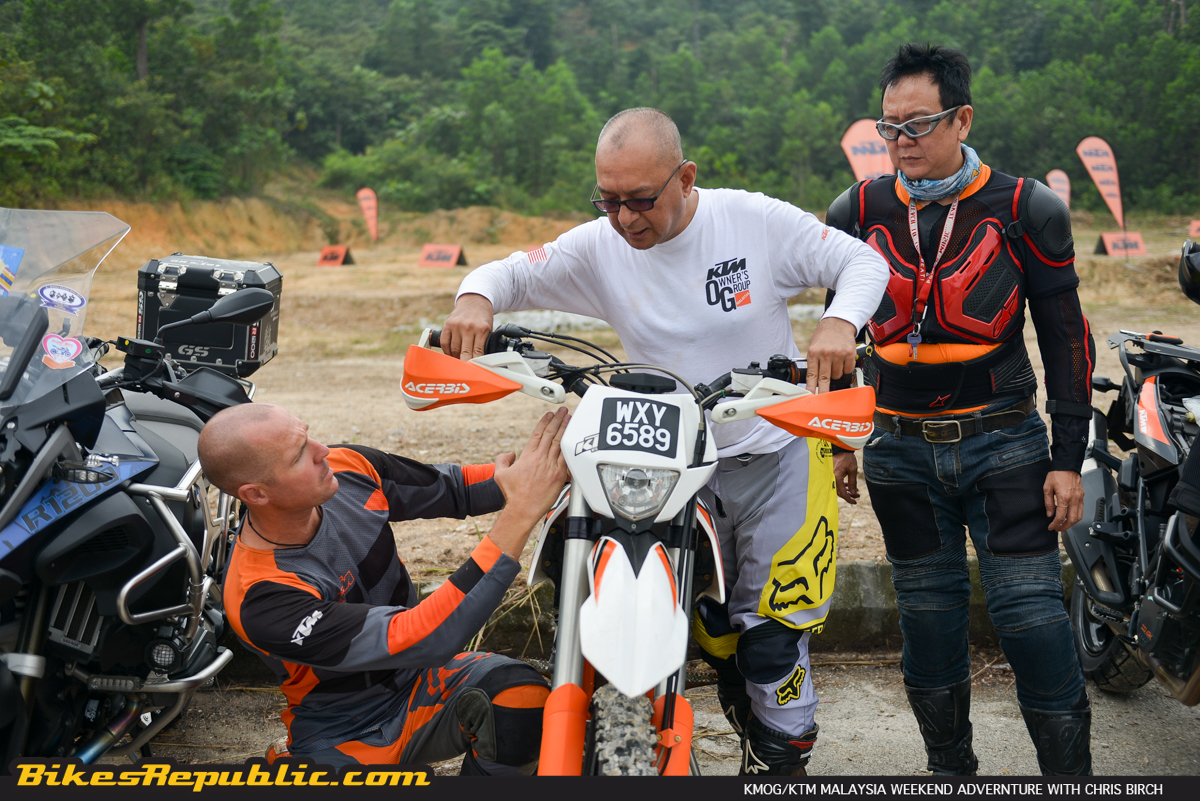 However, before the participants were allowed on track to ride, they were called back to the tent for a briefing about body position, particularly on how to stabilize the lower body by clamping the feet, legs knees and thighs to the bike, while allowing the upper body to ride loose. Standing up the footpegs is the hallmark of off-road riding, so additionally, we were also taught on the correct technique of standing up and how to position the body for optimal weight distribution. Weight distribution affects the bike’s chassis balance hence traction and control. 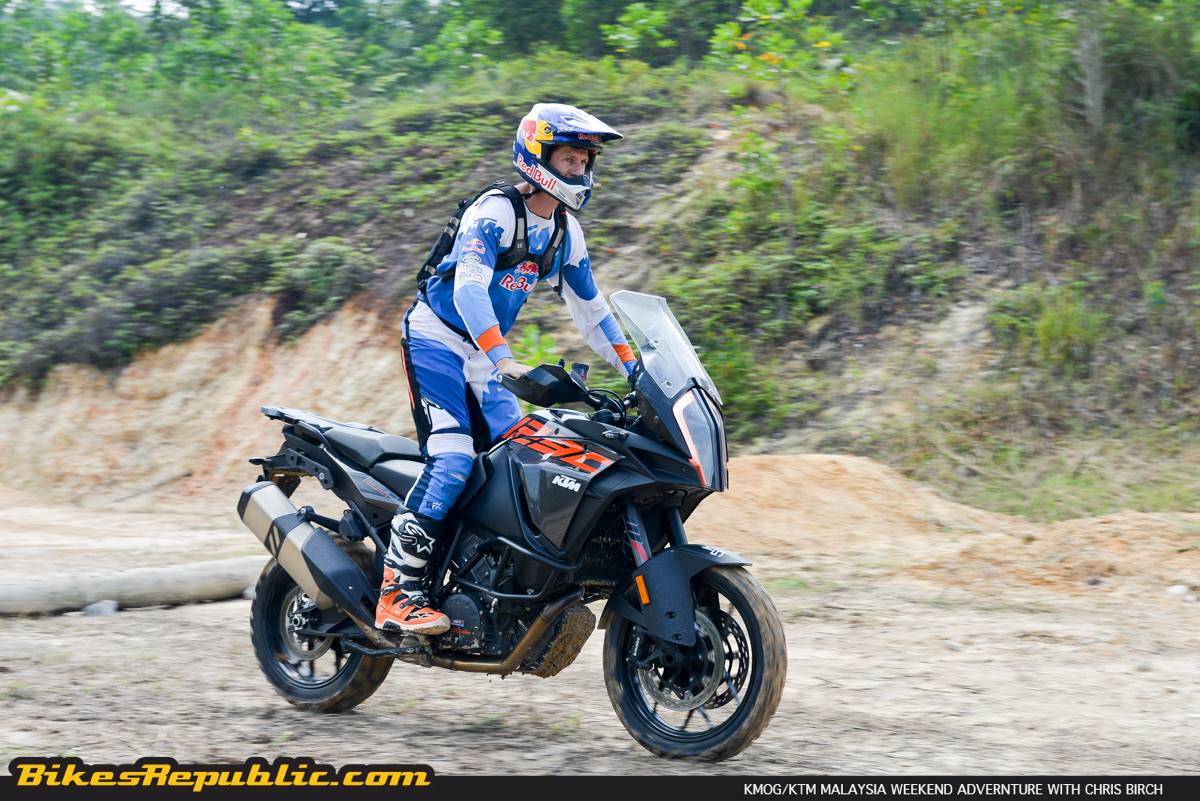 Chris then showed how it’s done by riding on the 1290 Super Adventure S out on the course. He broke the participants easy by having them trail him around the course, before setting them loose while he and Whitehouse instruct from the sidelines. We were called in a for critique a result from what both instructors saw and sent back out again to practice. (The clinic operated this way throughout the day.) 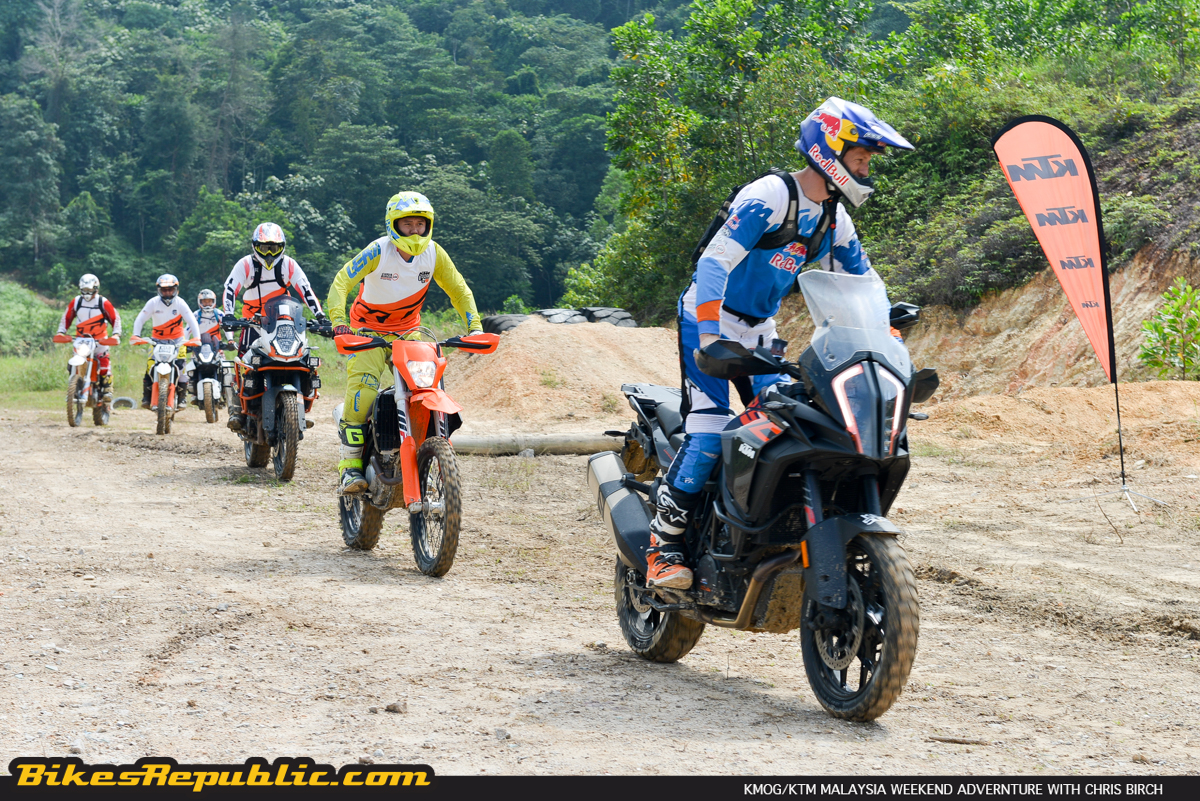 The weather had gotten really hot at that point and the clinic stopped for lunch.

Instruction continued afterwards, moving on the techniques of turning the bike. Getting a bike around a corner in the dirt is different from doing on tarmac. Whereas road-centric riders lean their bodies into a corner, off-roading calls for sitting up on the highside and pushing the bike down into the corner. It’s done so to place the rider’s weight onto the tyres for more traction. Apart from that, it’s much easier to control a slide. By the way, the sharper turns are taken sitting down, while the rider could choose to either sit down or remain standing for the gradual stuff. 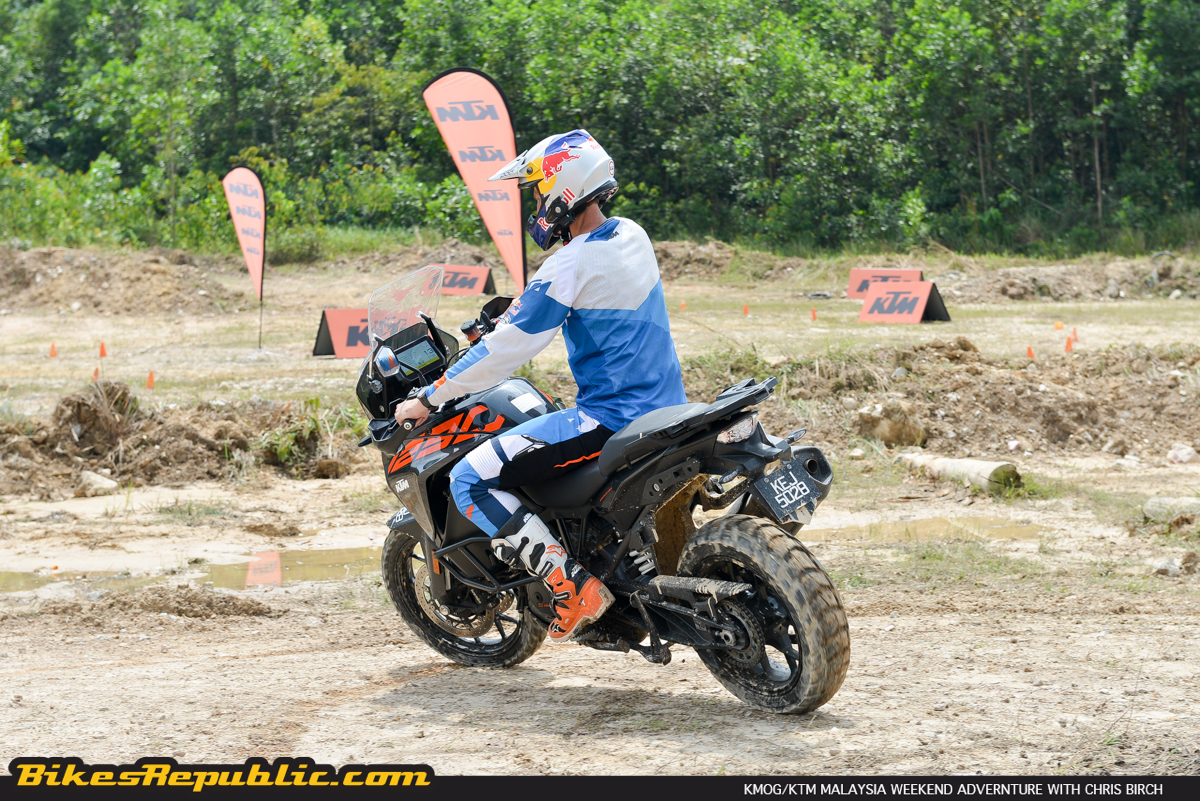 But more importantly, Chris stressed on the need to look ahead to where we intended to go, instead of just in front of the bike. Target fixation – whereby the rider keeps staring at an obstruction or dangerous situation – will ironically cause him to hit that very object he wanted to avoid. “Look where you want to go,” is something which every motorcyclist must practice. 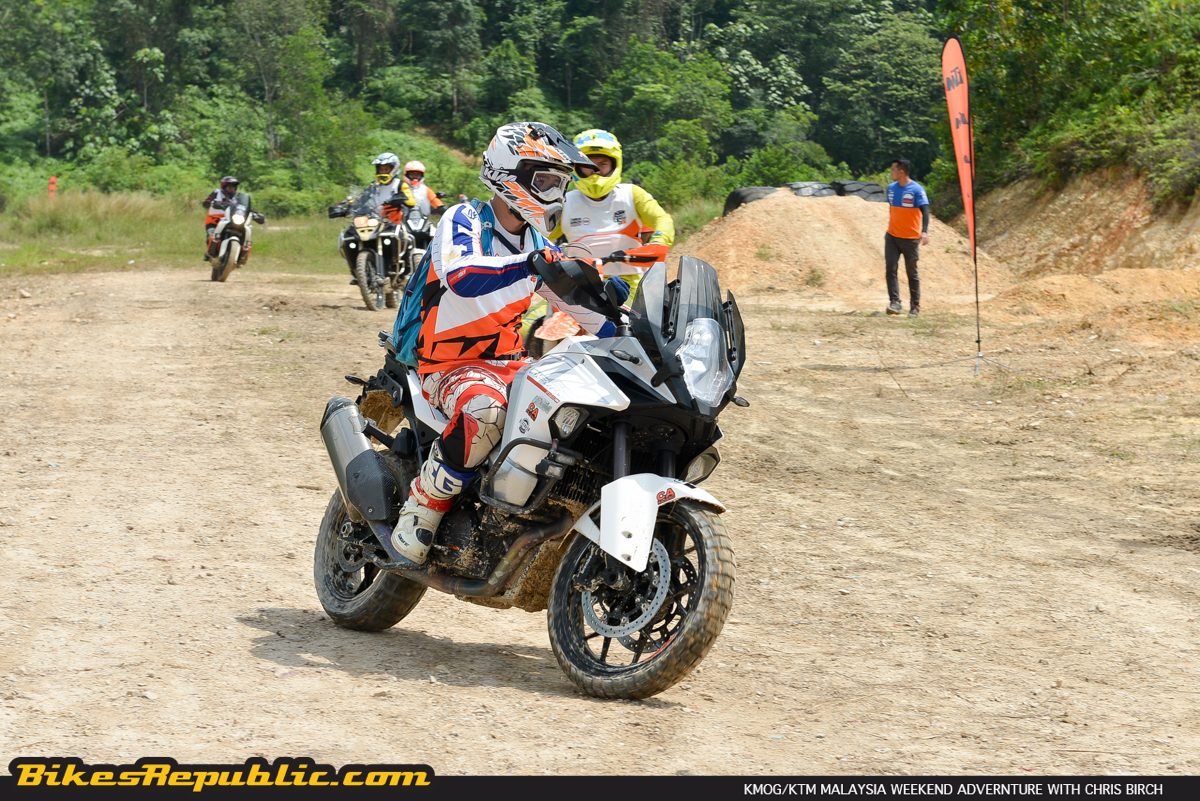 Next on the card was how to balance the rider’s weight on the outer footpeg when when standing up to negotiate slow turns and control the bike. 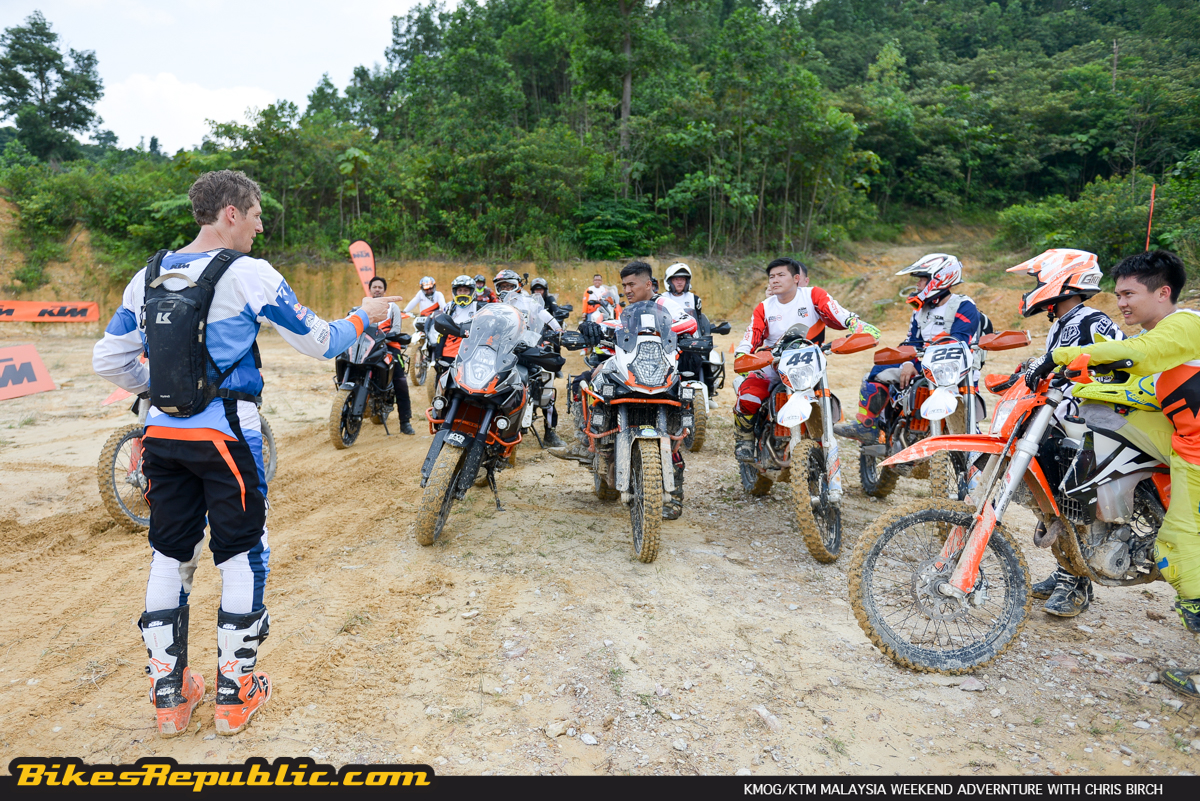 Progressing to the next stage, we were instructed on how to clear obstructions such as an extra slippery (read: muddy) section or logs. The technique is to look as far forwards as possible, then power before the offending section, and rolling off to let the bike’s momentum carry it through. Chris first demonstrated on one particularly deep mud patch before moving over to the tyre ramp. 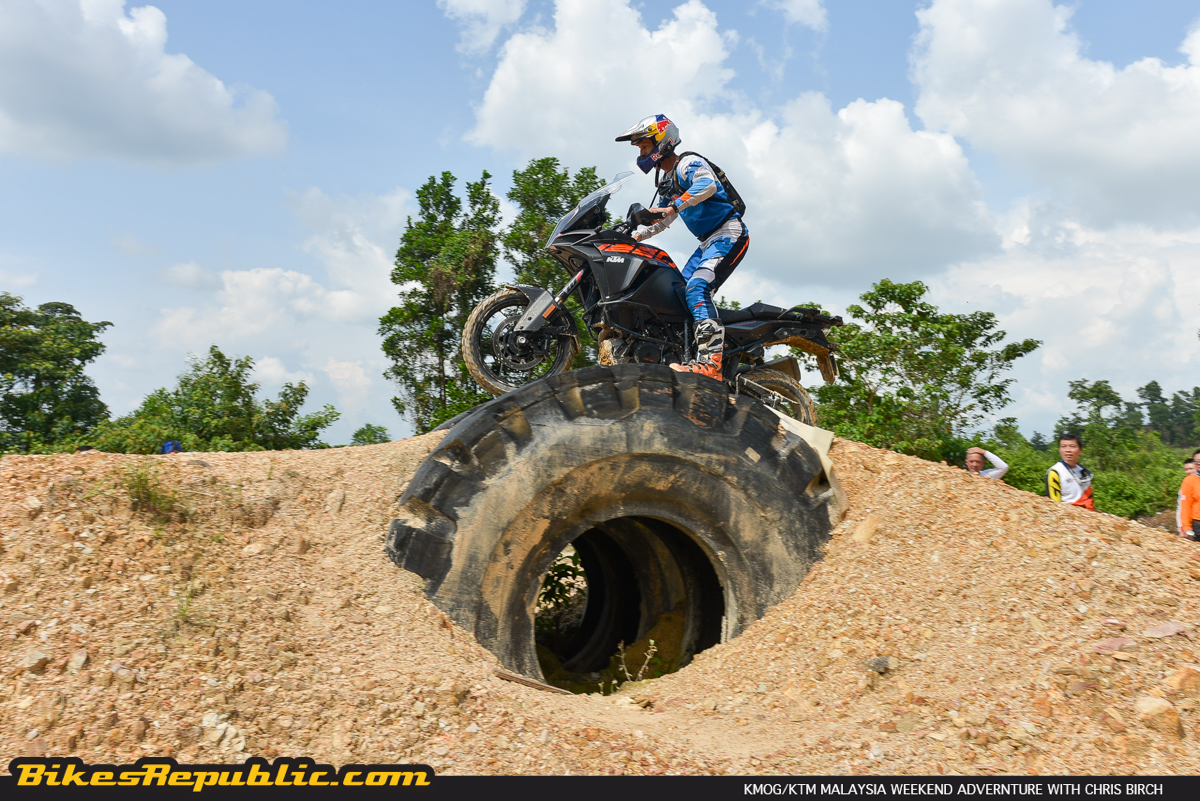 Participants powered up the leading face then rolled off their throttle just as they’re about to ride over. 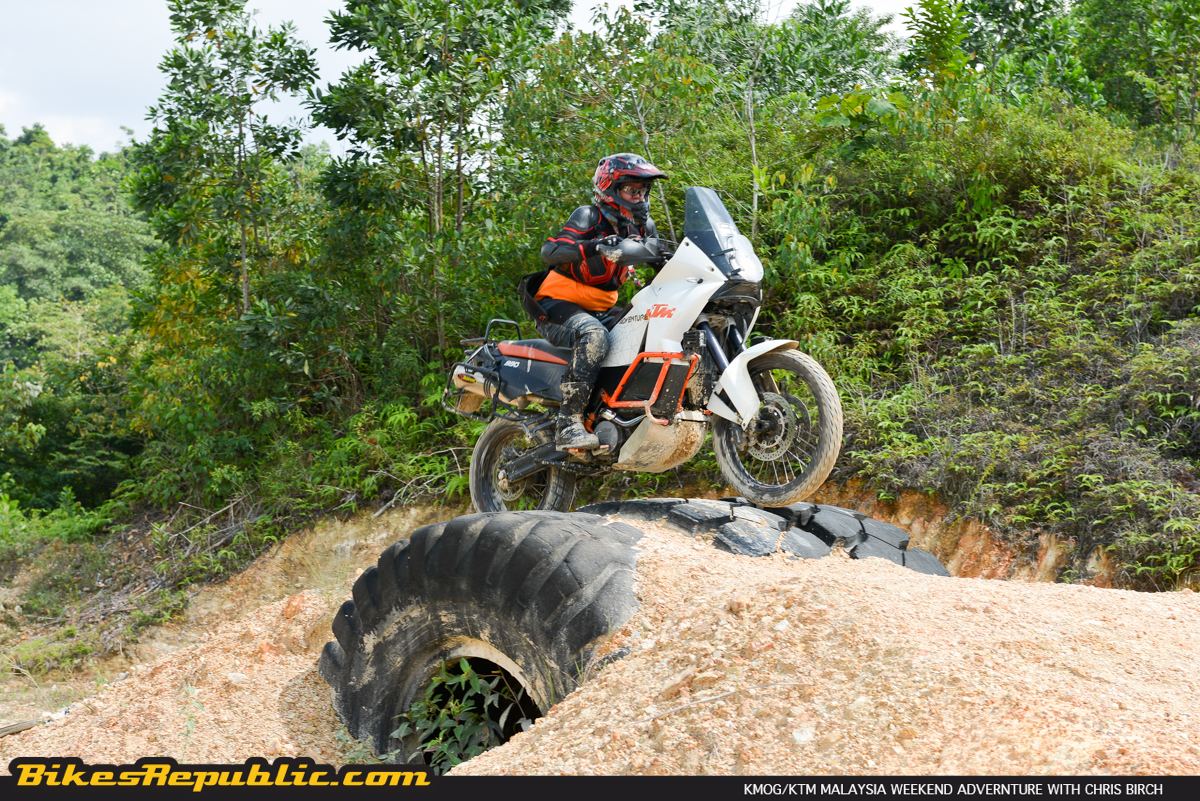 With this lesion covered, we moved over to the hill climb. There’s a steep hill at the near end of the Sungai Buaya course. Chris presented four different body positioning techniques that one could use for different situations. However, before letting the participants to ride up, he demonstrated on what one should do if the bike stalled on the way up. It was an eye-opener for everyone from the newbies all the way up to the experts. 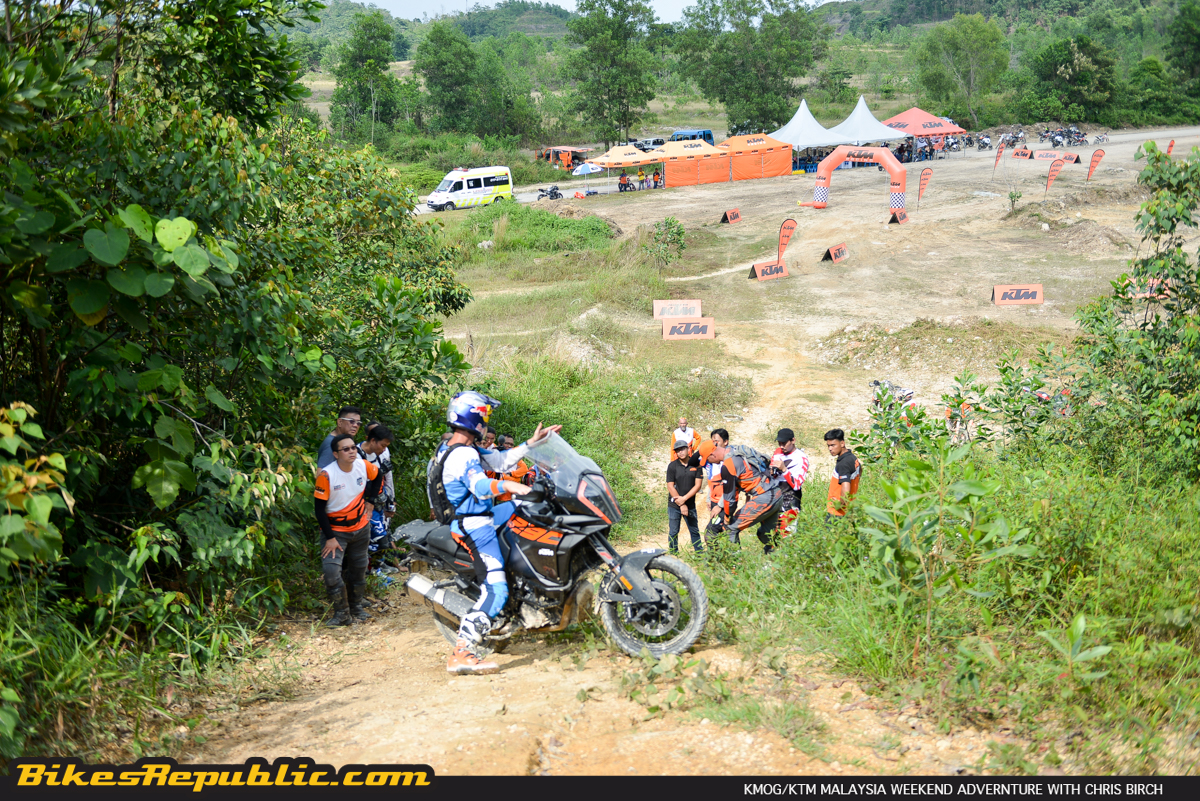 The hill climb was the final lesson of the day. There were a few get offs but the paramedics stayed under the tent marvelling at the type of riding everyone did and the bikes. 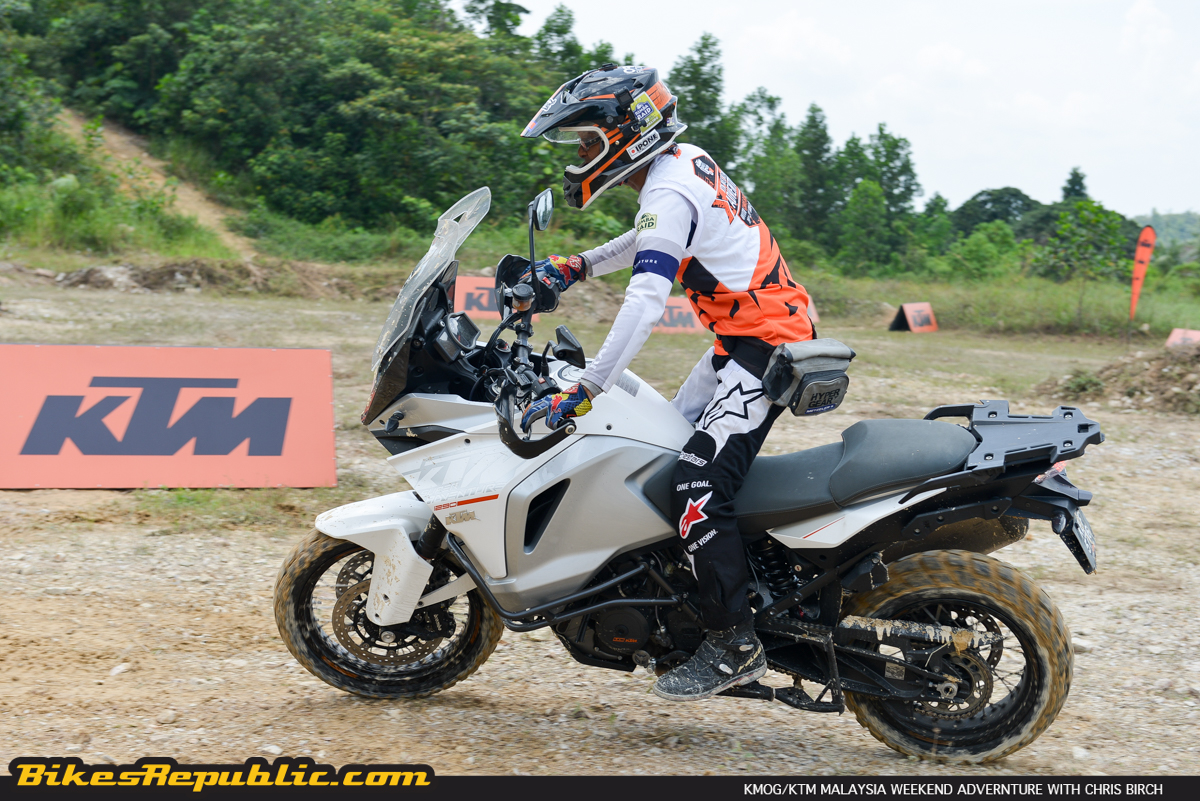 In conclusion, all the four aspects of good riding habits were taught i.e. body positioning and control, throttle control, brake control, and vision.

We bedded down for the night at the beautiful Ratu Rening Residency resort. Everyone was upbeat, despite having ridden in first hot weather then under heavy rain. Riding with and learning from a multiple champion has a tendency to do that.

Watch this space as we go trail riding tomorrow! 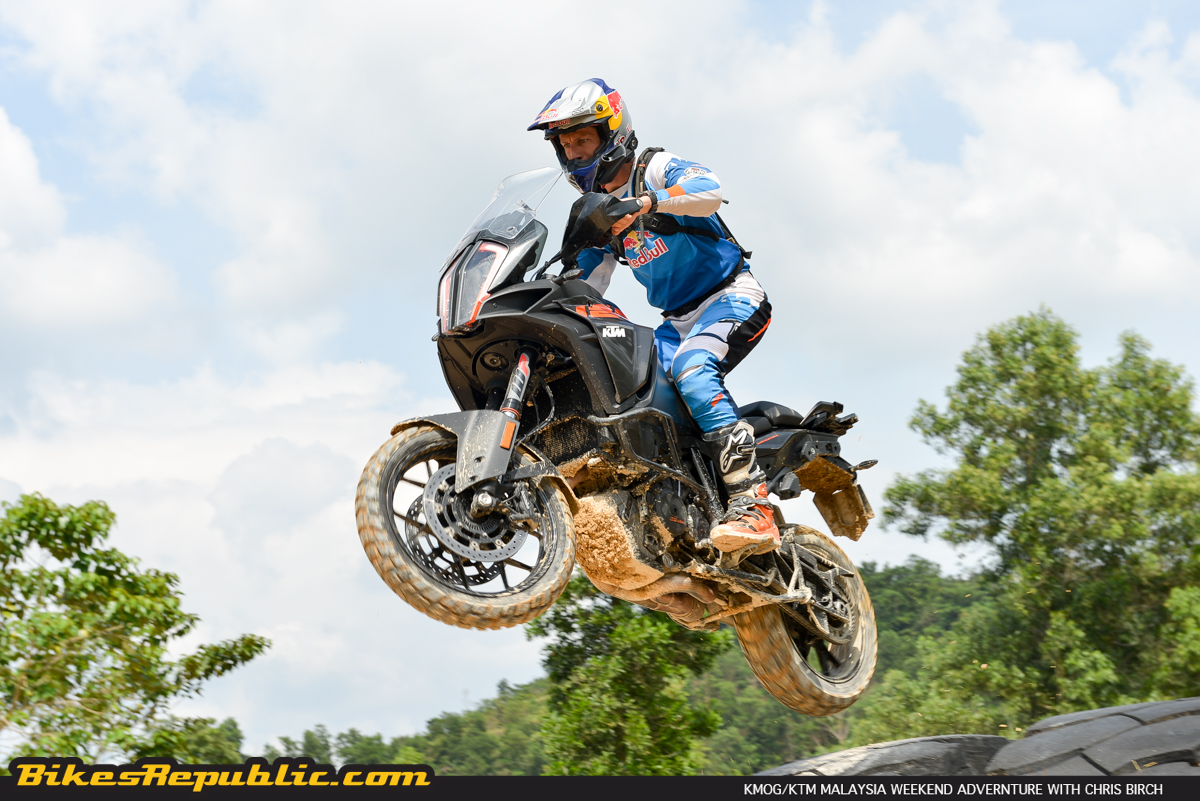