The concessionaire is thinking of installing more of the speed cameras on all six highways under their charge. If the proposal is approved, the cameras will also be installed on the Penang Bridge.

Datuk Azman made the statement at the launching of Ops Selamat 14. The operation will be held from 29thJanuary to 12thFebruary in conjunction with the Chinese New Year.

How Does the AES Work?

We’ve heard some motorcyclists say that covering the motorcycle’s speedometer will avoid the AES snapping the speedometer. We didn’t know if we should laugh or cry. 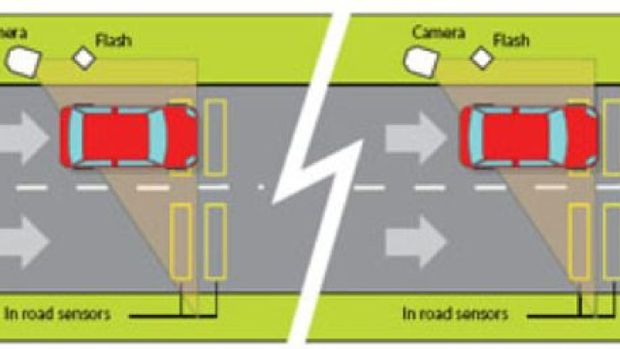 The AES trigger works by determining how much time it took the vehicle to travel through a set distance. Remember the formula Speed = Distance/Time? (Please click here if you don’t.)

There are two types of sensors:

For the road detectors, a pair are embedded some distance before the camera. The earlier the vehicle passes both, the faster it is travelling.

Let’s assume the two detectors or radar waves are 20 metres apart, and the car crosses in 0.5 second.