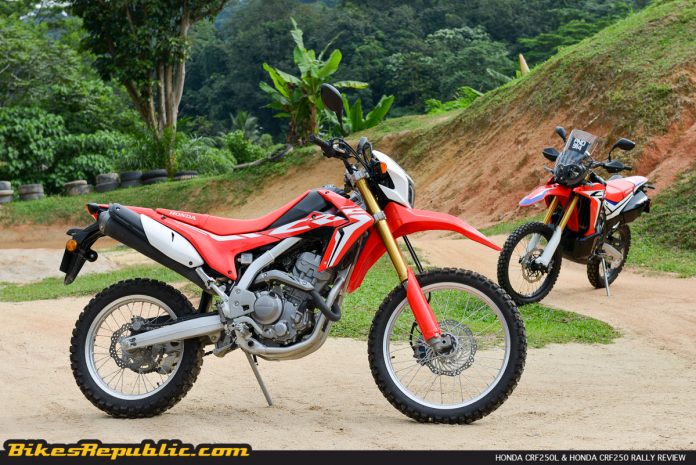 Designing a bike for the masses isn’t an easy proposition in this day and age, despite motorcycles being super-segmented according to their intended usage.

Boon Siew Honda launched the 2017 CRF205L and CRF250 Rally during the company’s special Iftar event for motojournalists at the Sepang International Circuit (click here for our report). 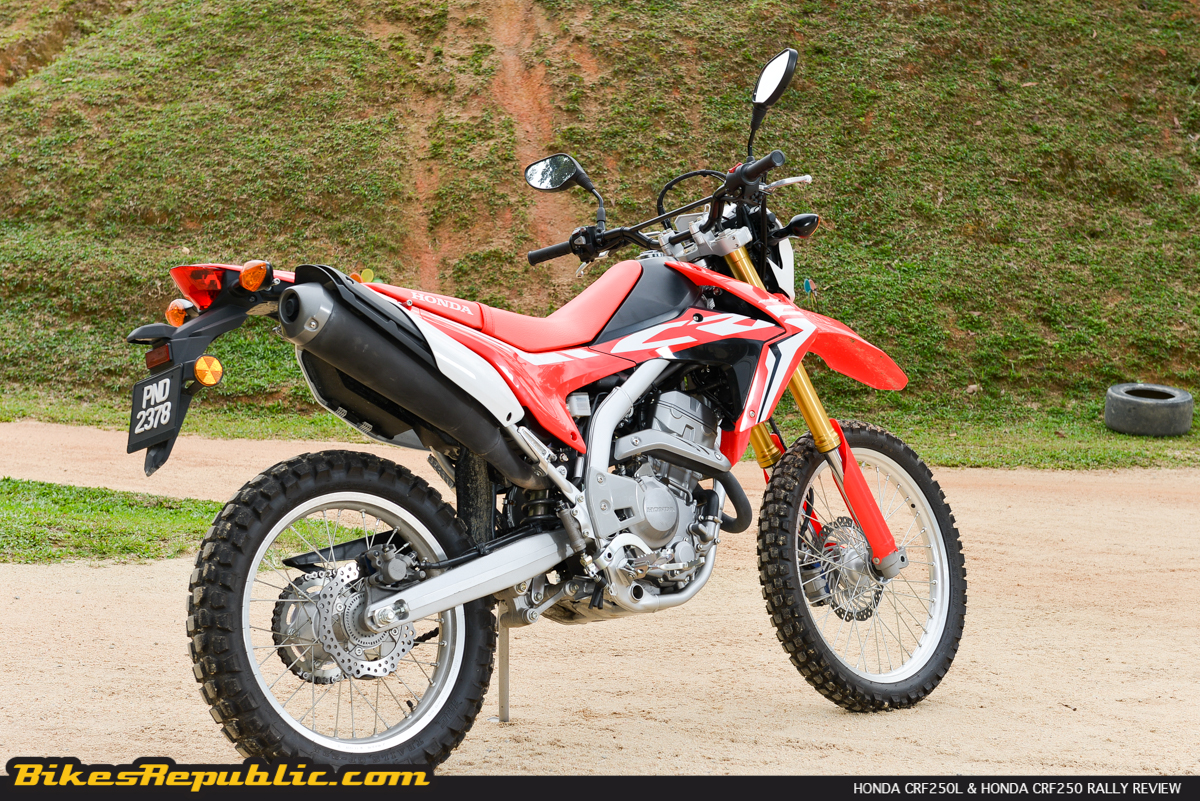 Being a dirtbike enthusiast, I was pretty excited to be present during the launch. Both bikes look great – the CRF250L certainly had some of the looks of the CRF250R motocrosser and looks like a proper enduro, while the CRF250 Rally looked like a proper adventure bike to have ran away from the Dakar Rally. 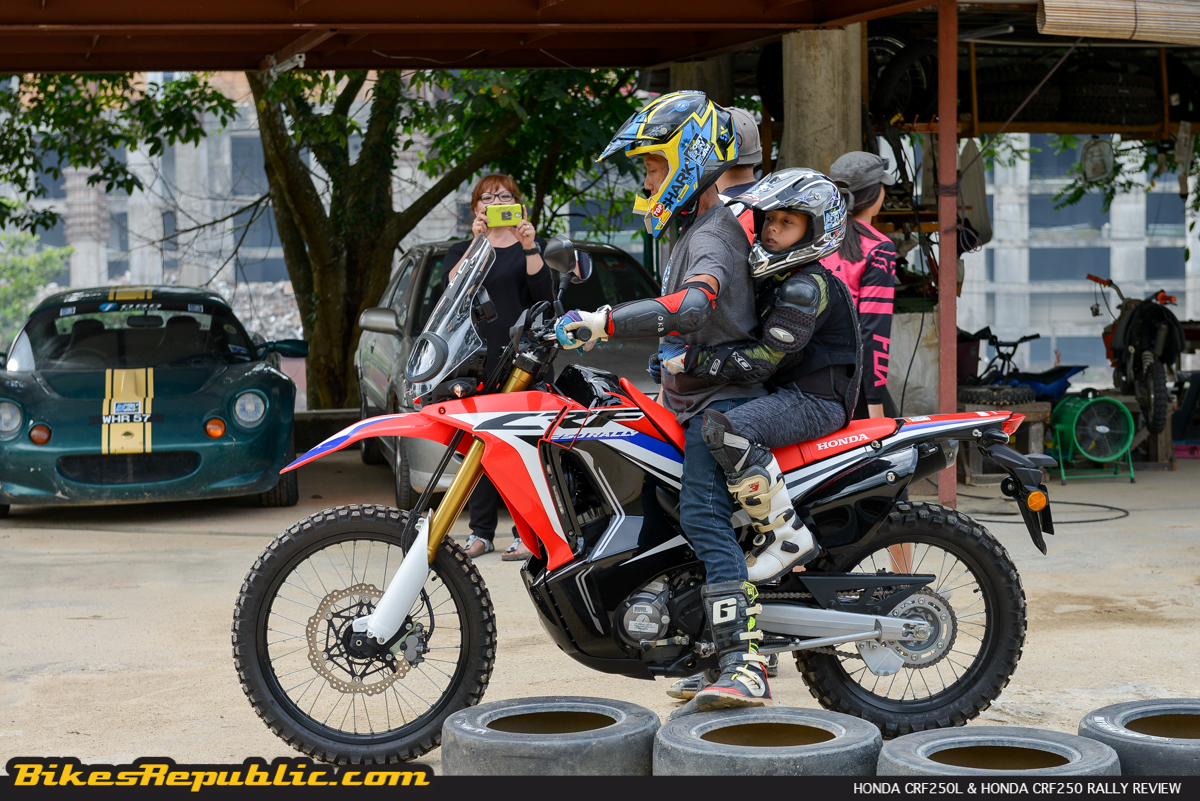 In typical Honda fashion, the bikes exuded the kind of quality hardly matched by other manufacturer, save one or two. The paintwork, fit between the panels, switchgear, front and rear lamps, frame, engine, swingarm, etc., etc., right down to the last bolt and nut were quality. 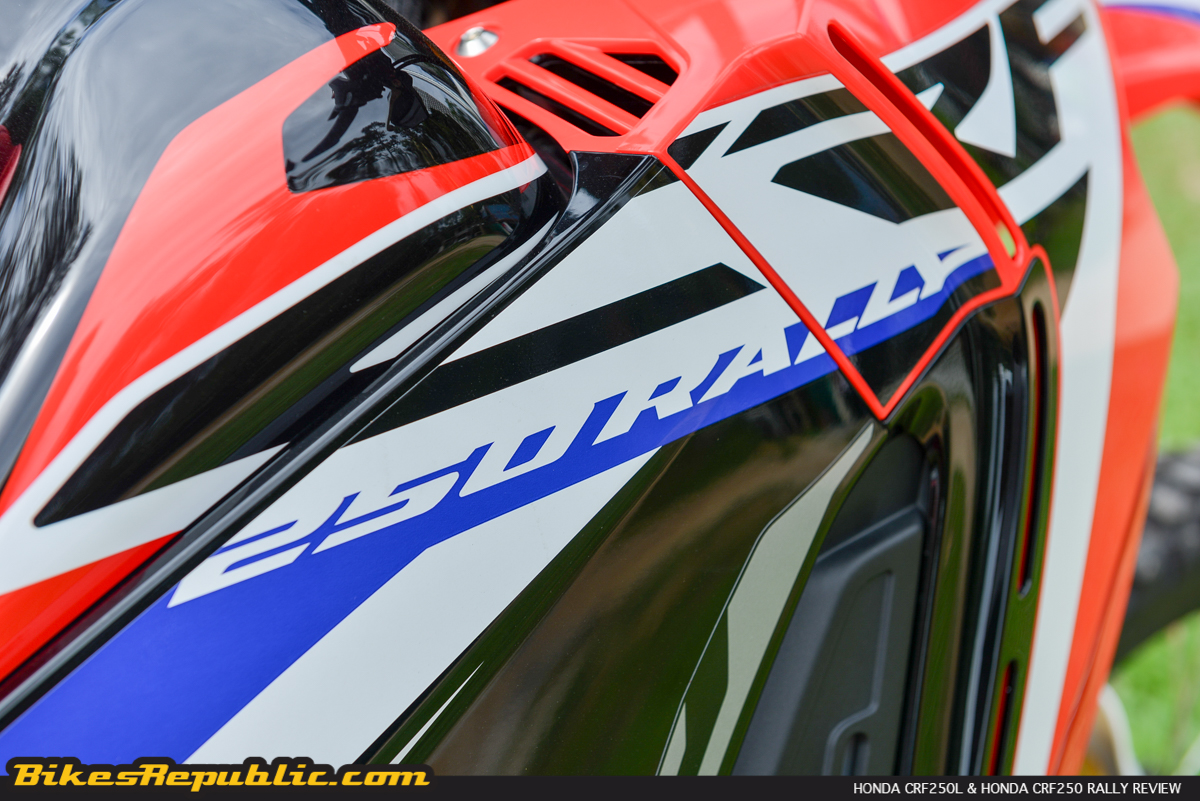 The instrument panel was simple but Honda managed to squeeze quite a number of good information, including a fuel gauge, and the rev counter bar is on top of the speedo. Good call. 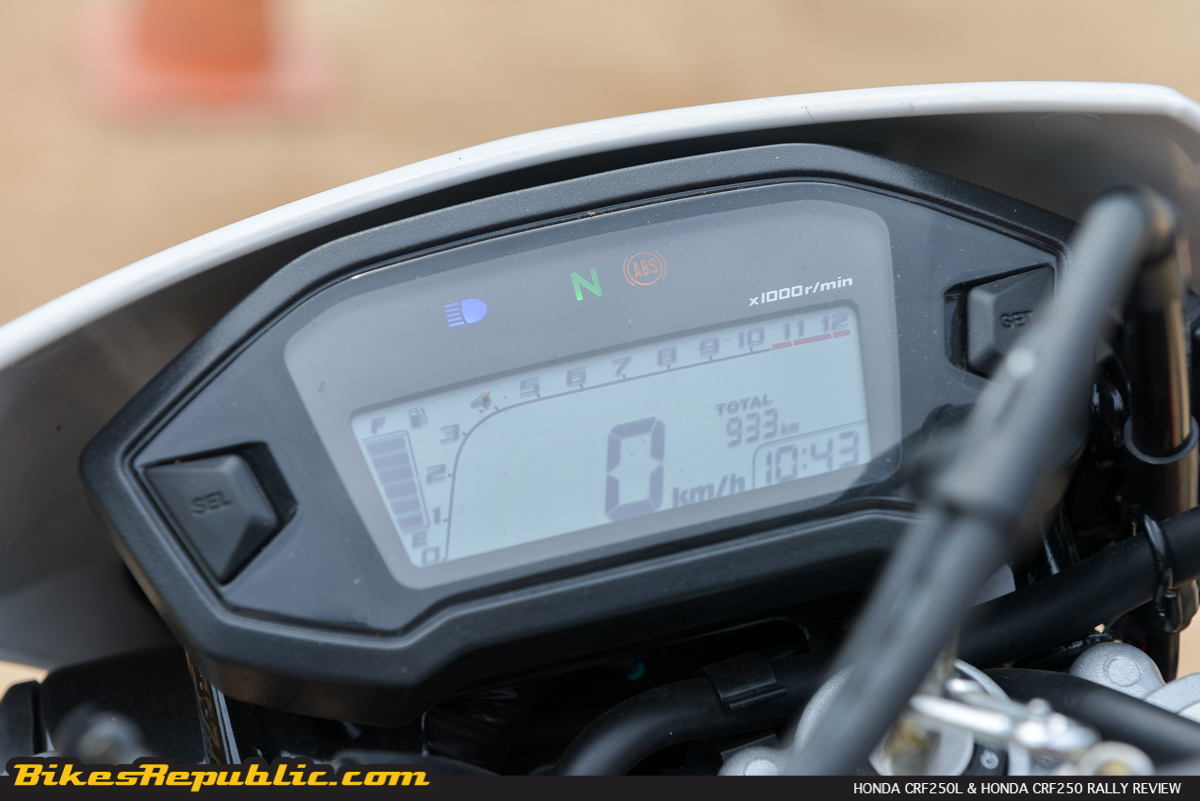 The PGM-FI fueled 249cc, DOHC, four-stroke, single-cylinder engine started up without fuss. But also without sound from the exhaust. It was super quiet. 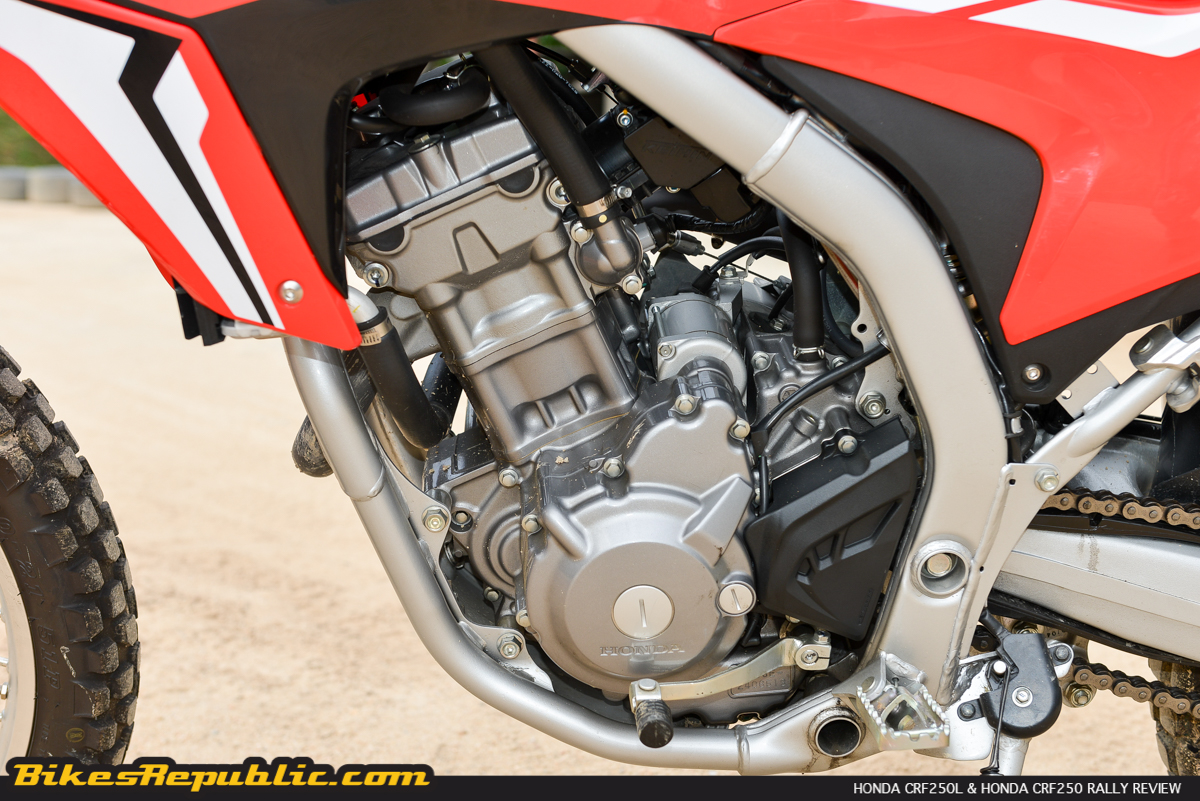 We set course for our Sifu’s MX school, Most Fun Gym (MFG).

Out on the road and as expected, the CRF250L felt unplanted. But dirtbikes have always been torquey and offer a different kind of entertainment on the road, right? Right?

Well, being in the middle of a gaggle of rempits revving their engines, I thought it’d be the right time to educate them about dirtbikes. First engaged, clutch in, I revved it up to 6000 RPM, popped the clutch as I moved my weight backwards on the seat for a wheelie. The CRF went brrrrrrrrrrrr and the handlebar started flick-flacking back and forth, and all I saw were the rear lights of those rempits as they disappeared up the road.

Fine, let’s see how it rides over the rest of the road.

The long-travel suspension soaked up most bumps, but running the bike through potholes had both ends hitting the hard part of their travel almost immediately. Too soft.

Okay, okay. Let’s do it in the dirt then.

The CRF250L was joined by the CRF250 Rally at MFG, where Oh Kah Beng, his understudy Ryan, Ahirine, Sep and myself took turns riding both bikes in the dirt.

Oh Kah Beng (OKB) took it up over the entire course at MFG. But the bike was visibly struggling up the steep inclines, necessitating OKB to use first gear. “The bike has a soft powerband and needs to revved to get it going,” the GP legend said. “Look at the rear sprocket,” he continued while pointing at it, “It seems to have been geared for the road.” 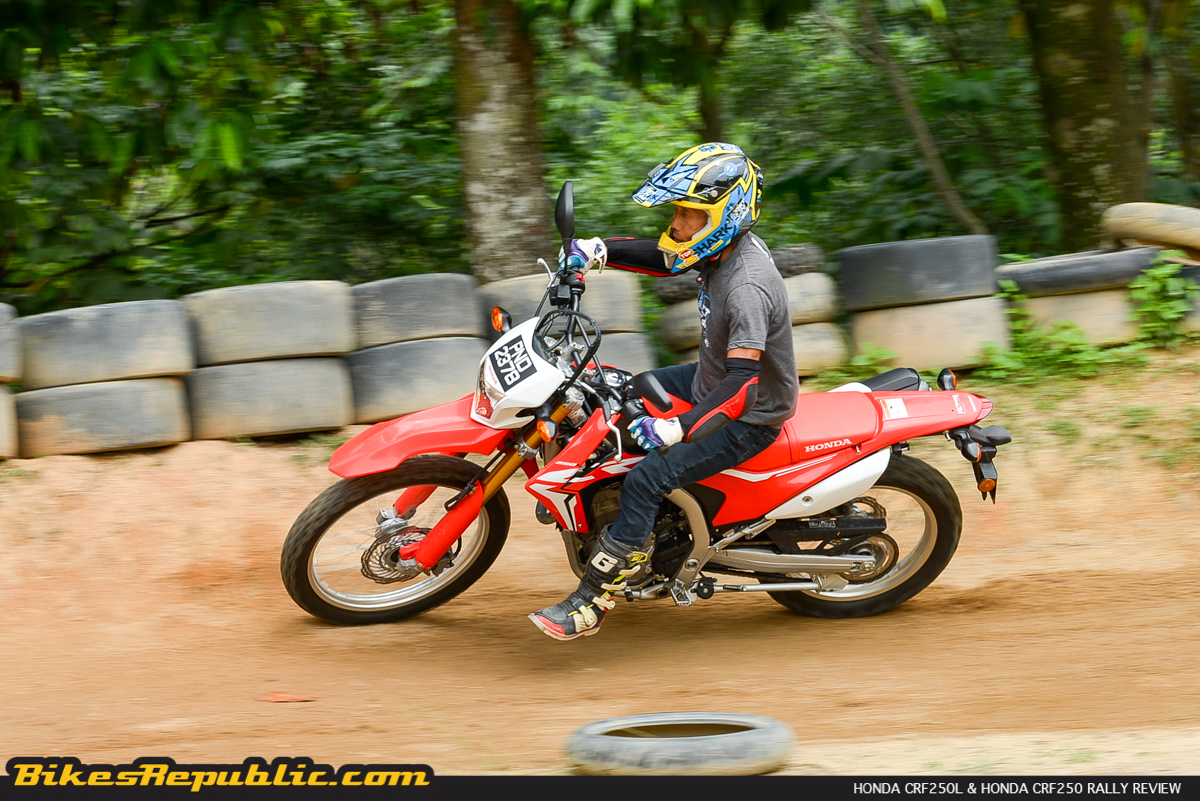 OKB also jumped the bike once. Only once. Observing and shooting photos from the trackside, I saw the rear suspension bottom out with a loud clunk. “I didn’t jump anymore after that. It just bottomed out too early and easily,” said OKB. 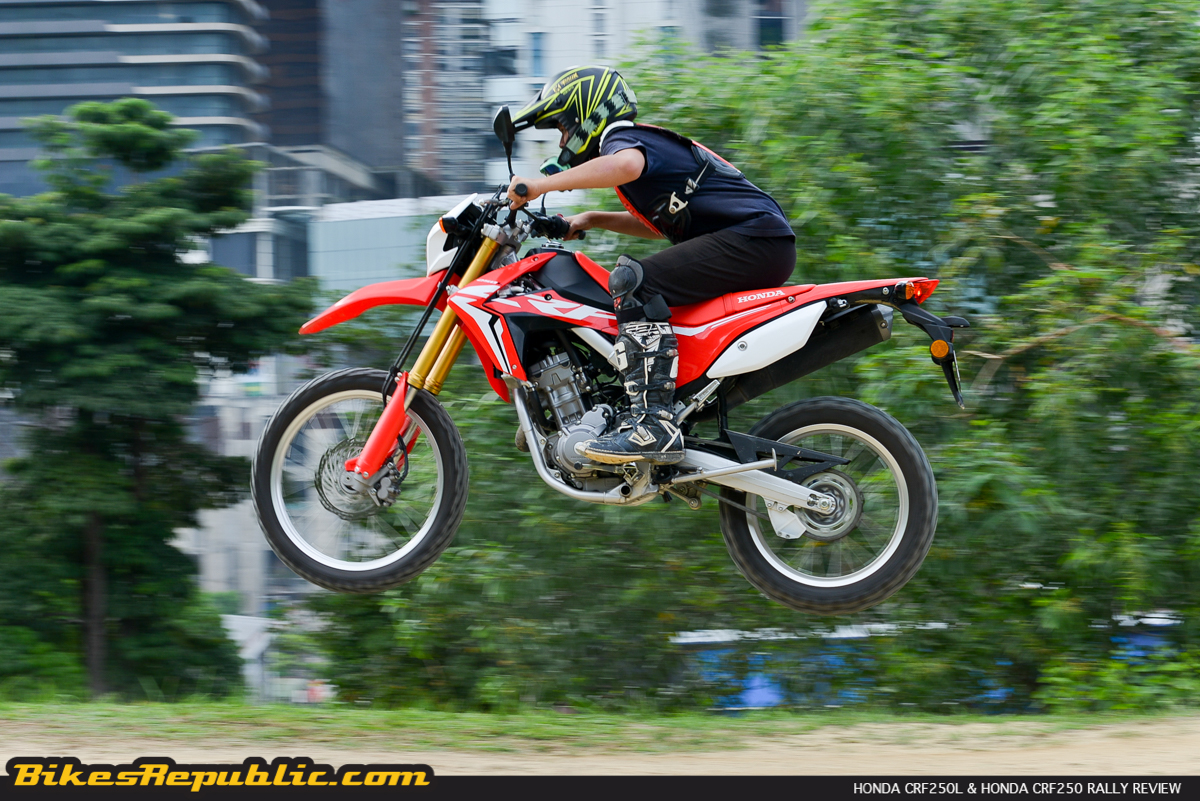 I took over while OKB continued with instructing his students. Coming off the humps, bumps and turns, the rear end squatted ominously. There was no point in pushing harder because we discovered that the CRF250L is much more suited for trail “cruising,” rather than as a hardcore enduro bike. 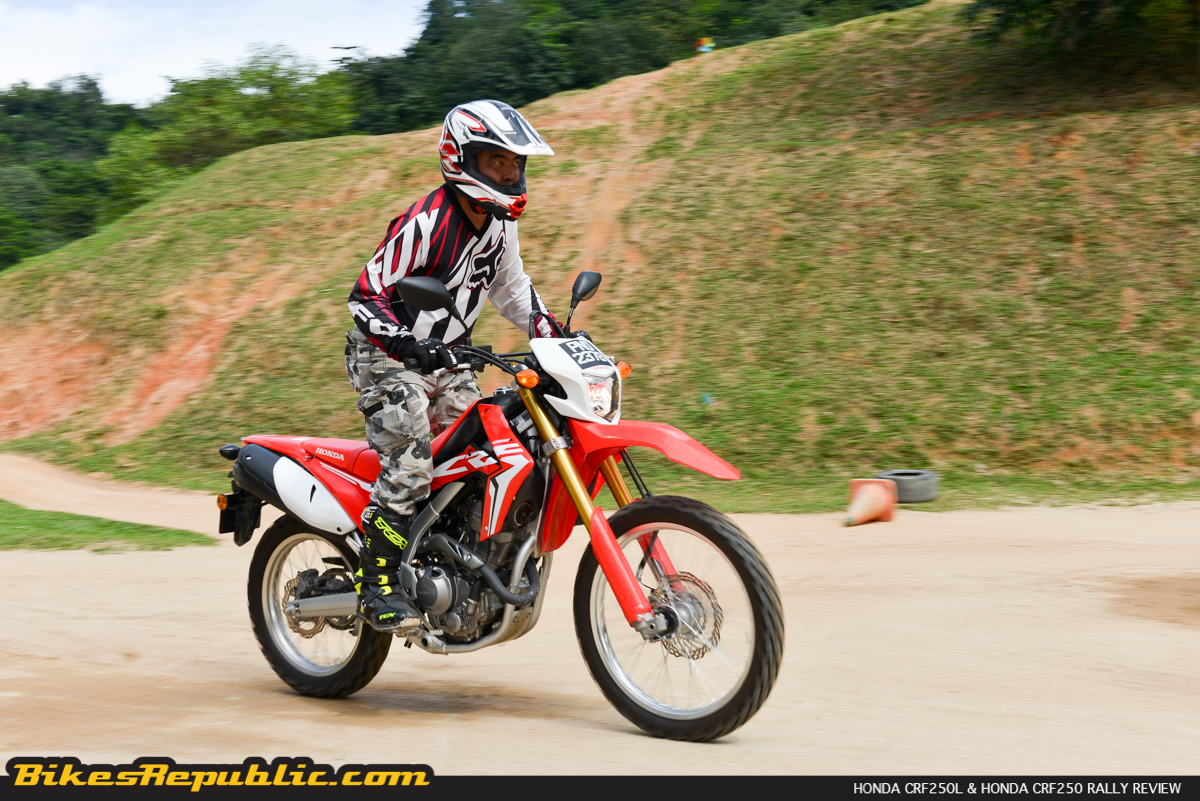 Ridden at a super relaxed pace without jumps and hard turns, the bike was comfortable and composed. It’s a shame since the CRF250L has a quick-revving engine, mated a superb frame and body but let down by being overly soft of both ends. 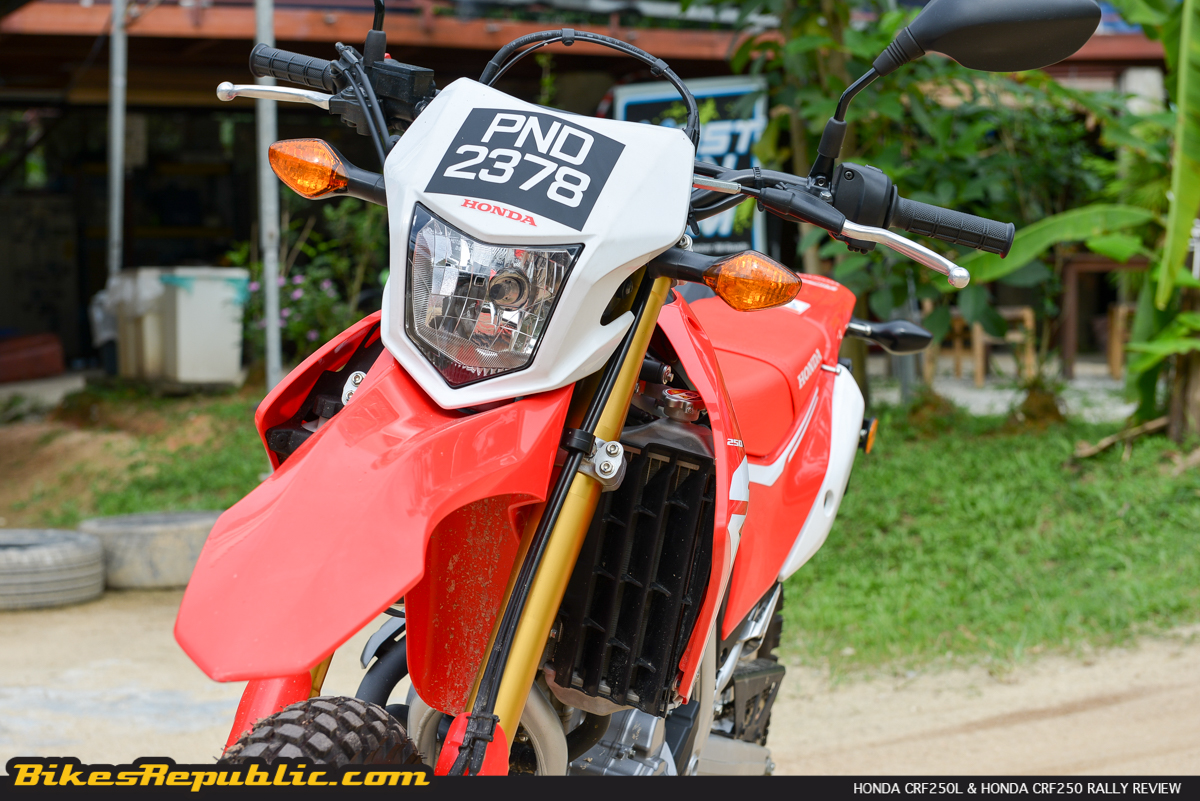 As mentioned earlier, the CRF250 Rally really looked the part of an adventure-tourer. 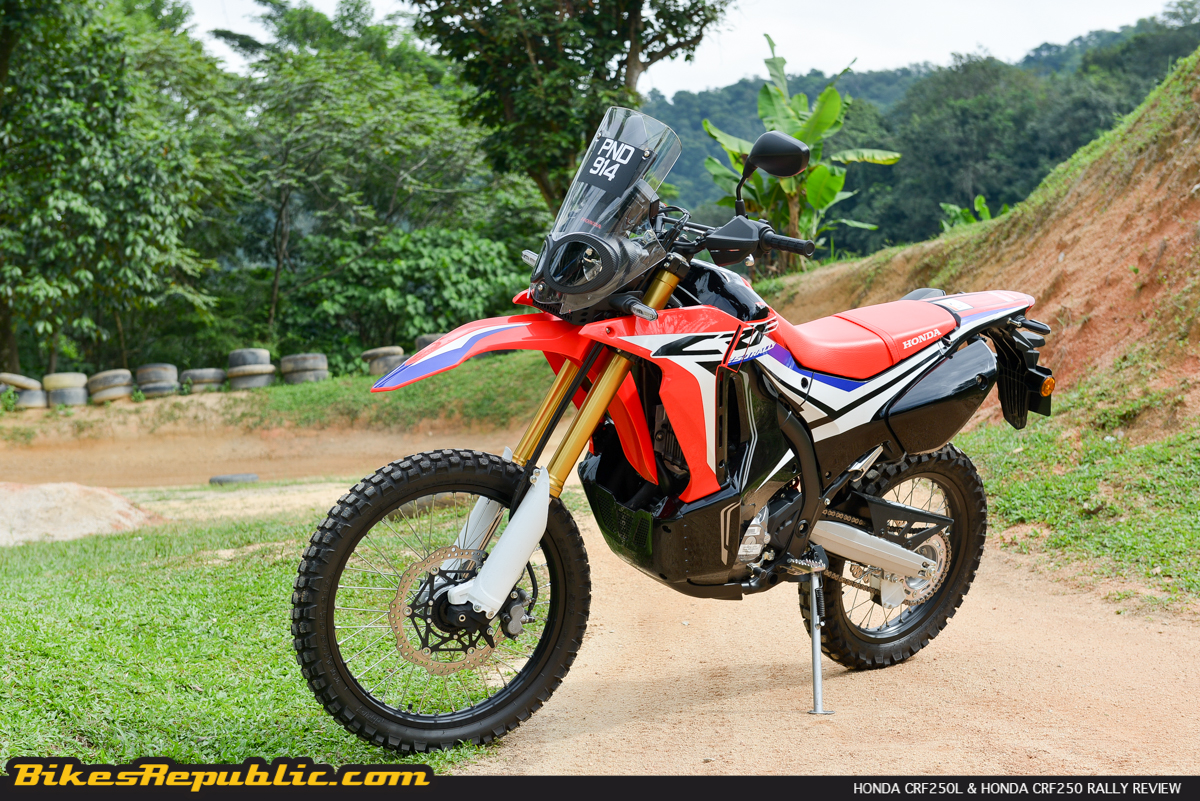 It has a windscreen, super bright dual LED headlamps (the binnacles look like goggles – nice!), a large front bodywork which looked like it had extra fuel tanks, and a large rear section. The colour combination was really pretty too. 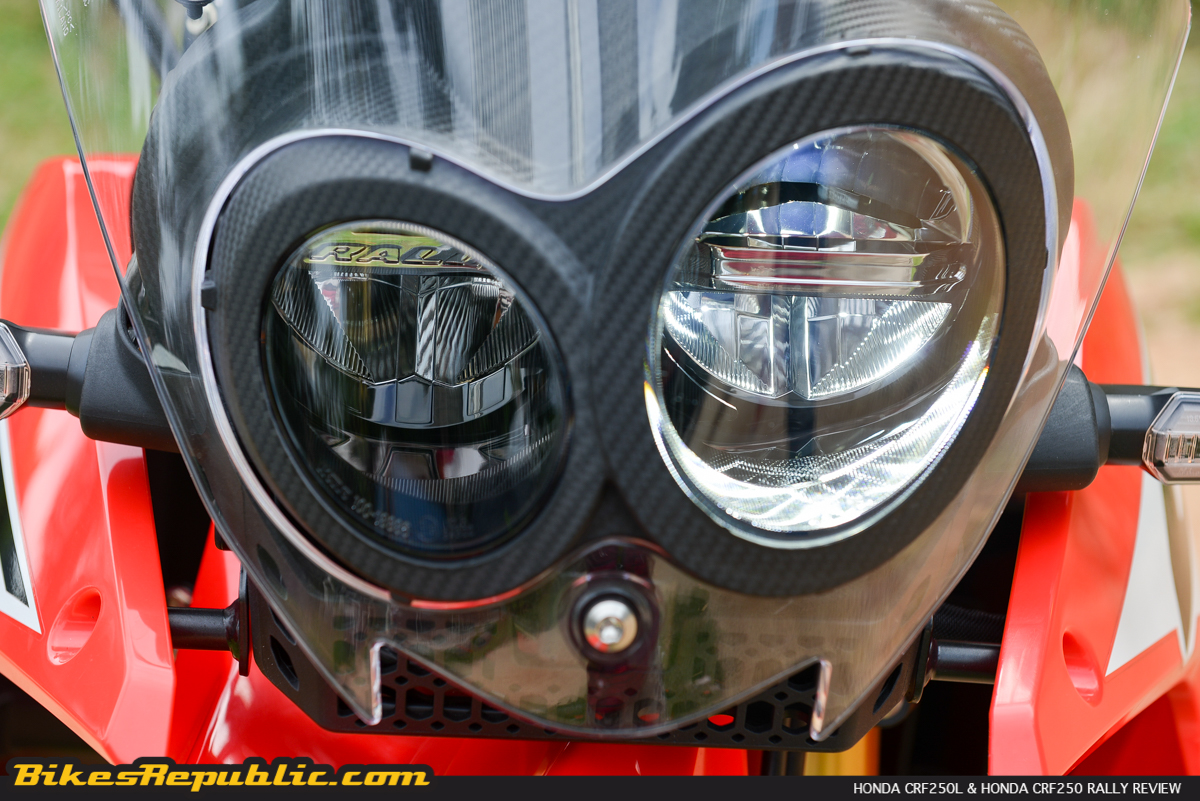 OKB first rode it with a student as his passenger to show him the different points around the track. He then went full tilt after dropping the kid off. 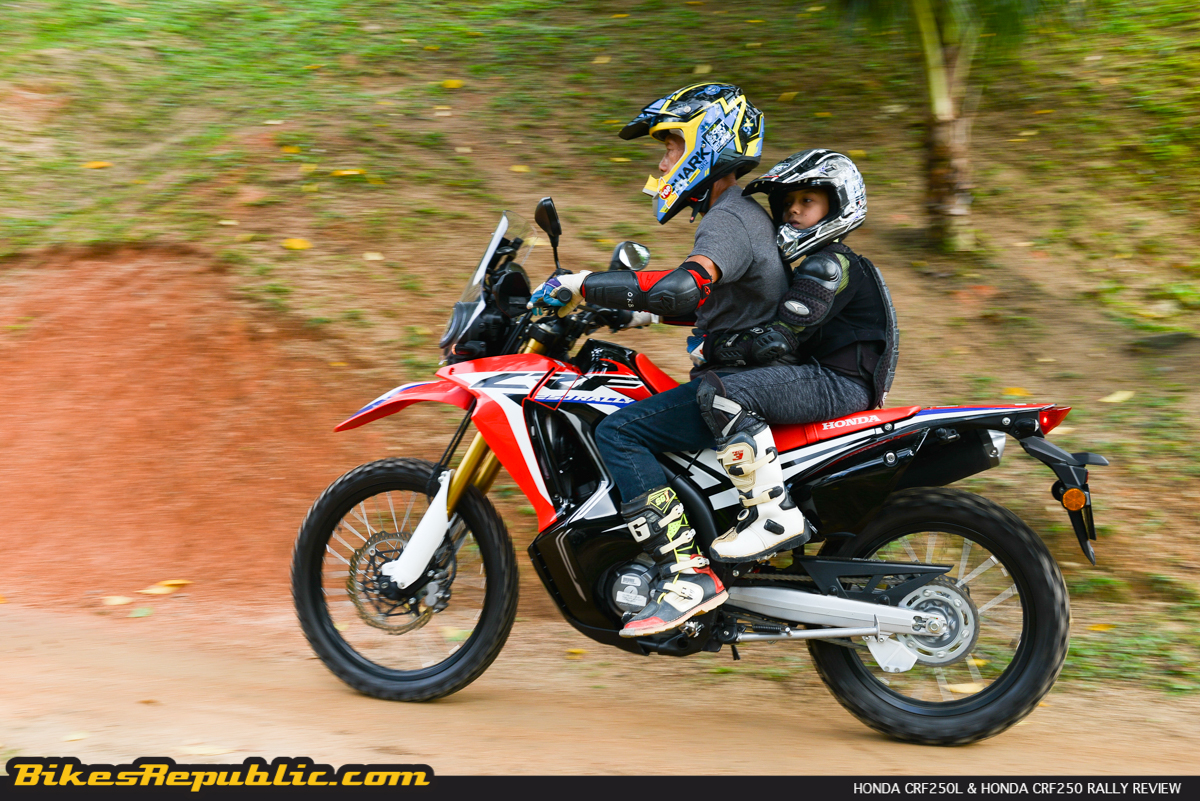 The Rally was visibly harder sprung than the CRF-L and it didn’t bottom out. That was probably because it had to carry more bodywork and load when the owner takes it touring. 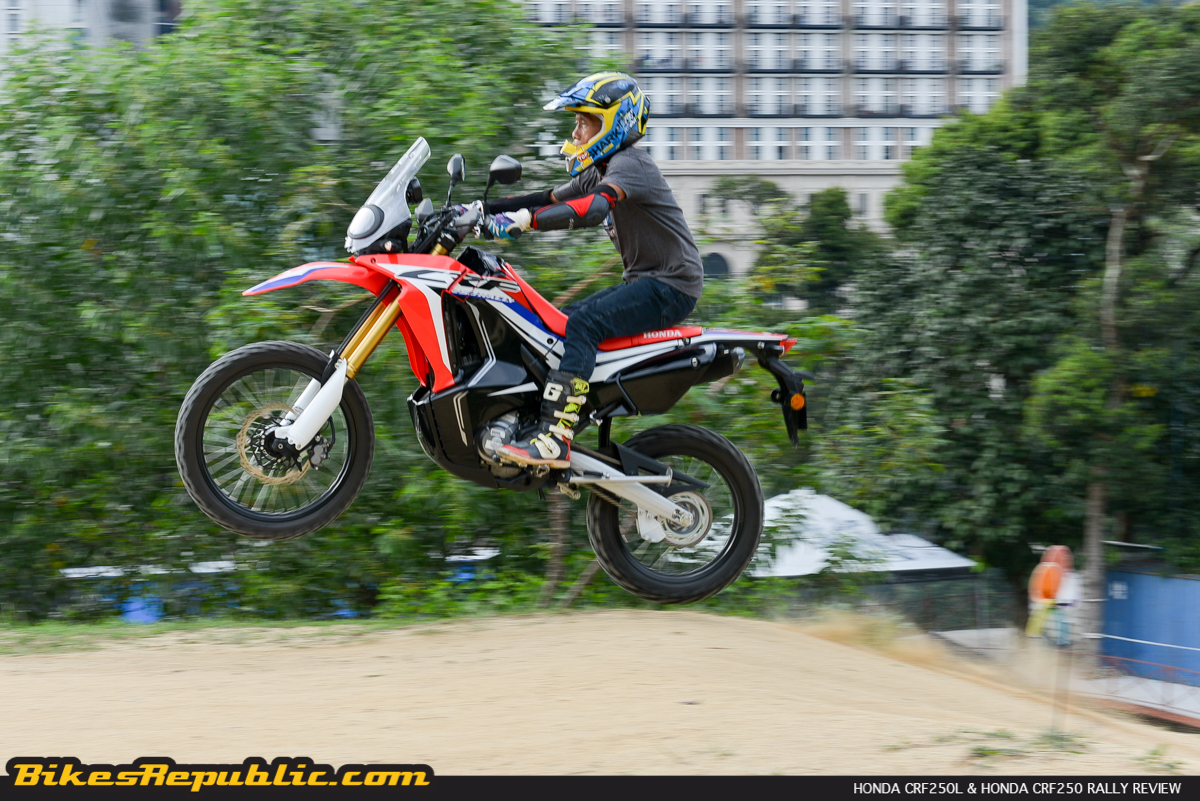 However, the engine response was the same as the CRF-L, which needed lots of revs over the harder parts. The rear sprocket is also geared for road riding. “It needs more kick,” said OKB. 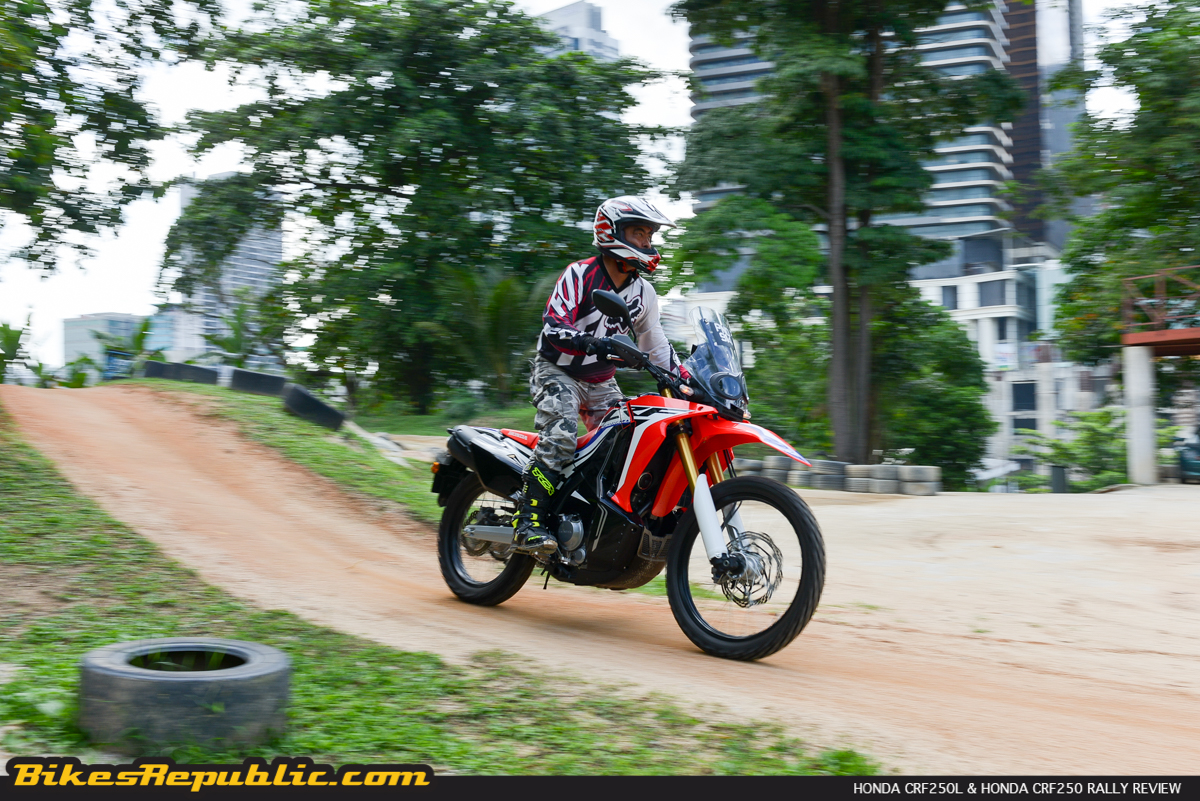 OKB continued, “But in all, I liked the Rally better as it’s more composed around the track. It looks pretty sexy too.”

“On the other hand, it doesn’t ride too well on the road, so it means it’s meant for touring in the dirt.” 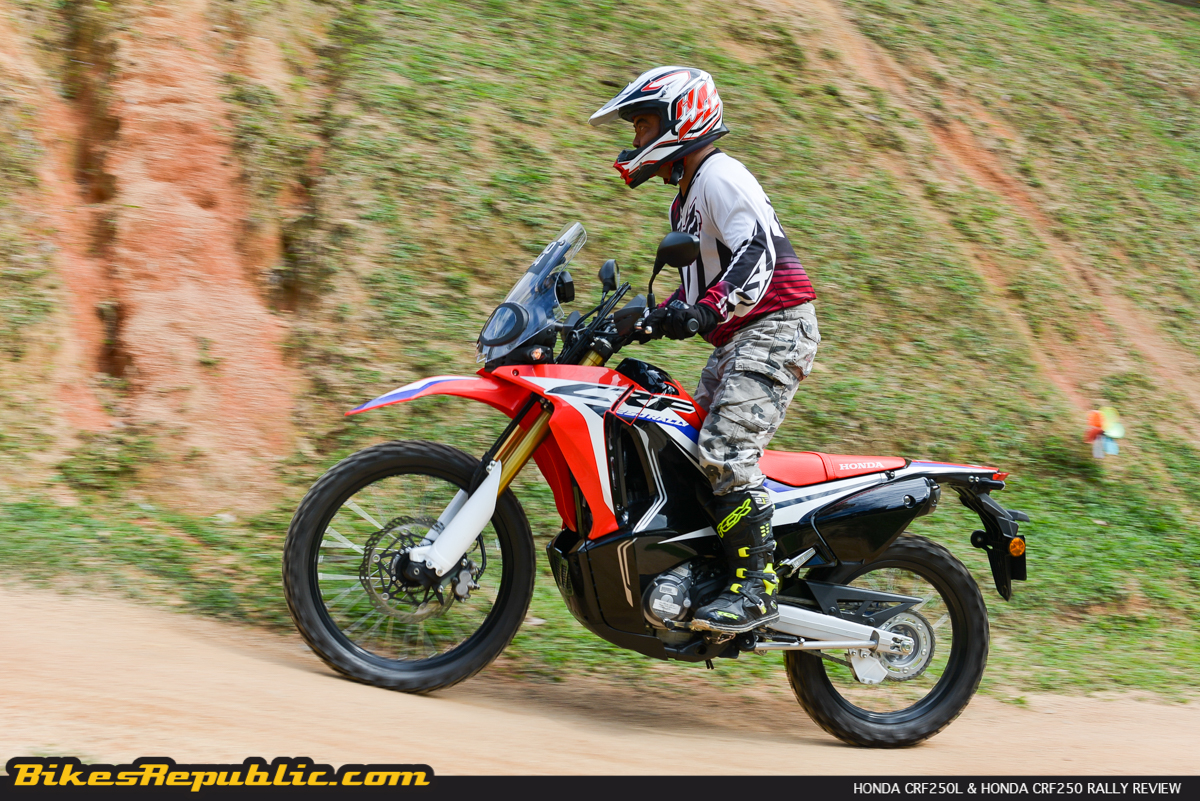 Sifu is right. I rode the bike on the road and it didn’t want to steer very well. However, once it started to lean, the front end plops into the corner. This was despite me riding it both road (lean in) and dirt style (push down).

I have my heart torn out for this Honda duo.

We understand that the CRF250L’s soft rear spring was intended to sag more with the rider on board so as not to intimidate with a tall ride height, but perhaps a more progressive spring would be good? It’s already using Honda’s wonderful Pro-Link set up anyway. As for the power delivery, it’s great for beginners as it’s not overwhelming. I guess you could always replace the rear sprocket for a bigger one when your skills improve.

As for the Rally. We can’t get over how beautiful it looked, but it too needs some improvements to make it the perfect all-rounder. It could be made to handle better on the road and in the dirt. But again, it was okay as a beginner bike. 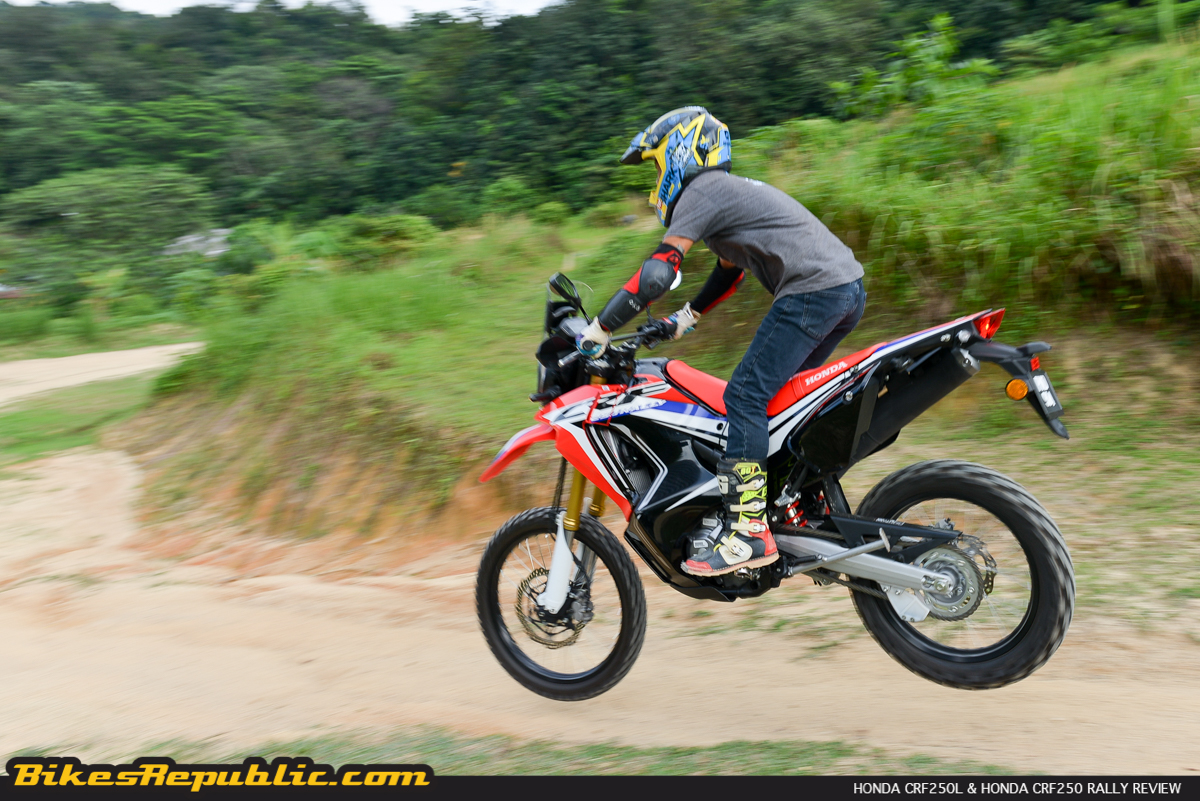