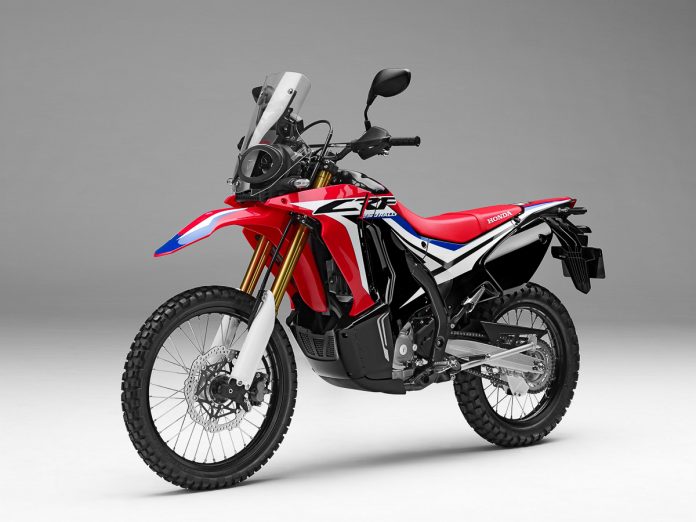 Both the CRF250L and CRF250 Rally are built for toughness and durability that can be ridden comfortably both on and off paved roads. 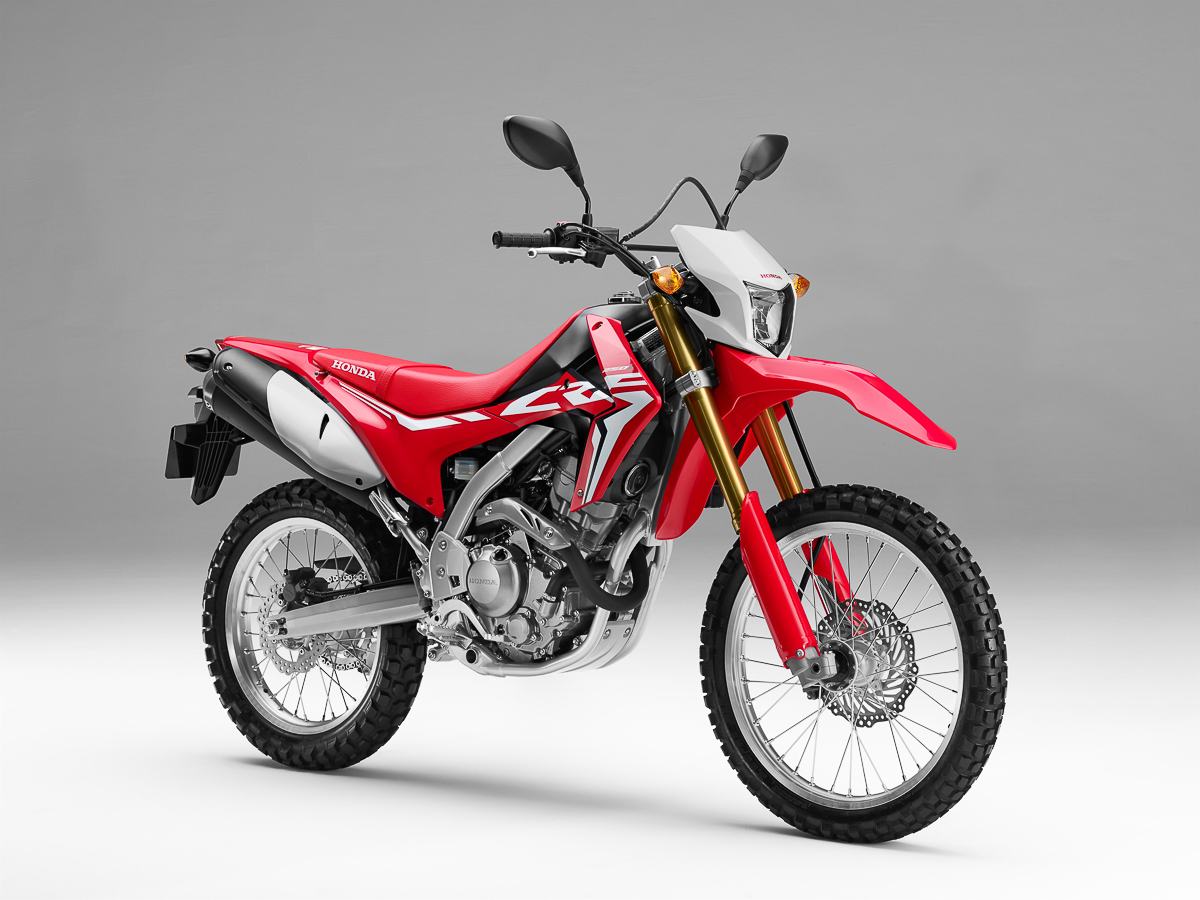 Attention to all adventure riders and enthusiasts! Boon Siew Honda Sdn Bhd (BSH) has officially launched the 2017 Honda CRF250L and CRF250 Rally for the Malaysian market. These brand new adventure bikes are perfect for some on and off-road adventures which are also perfect to be used for daily commuting. 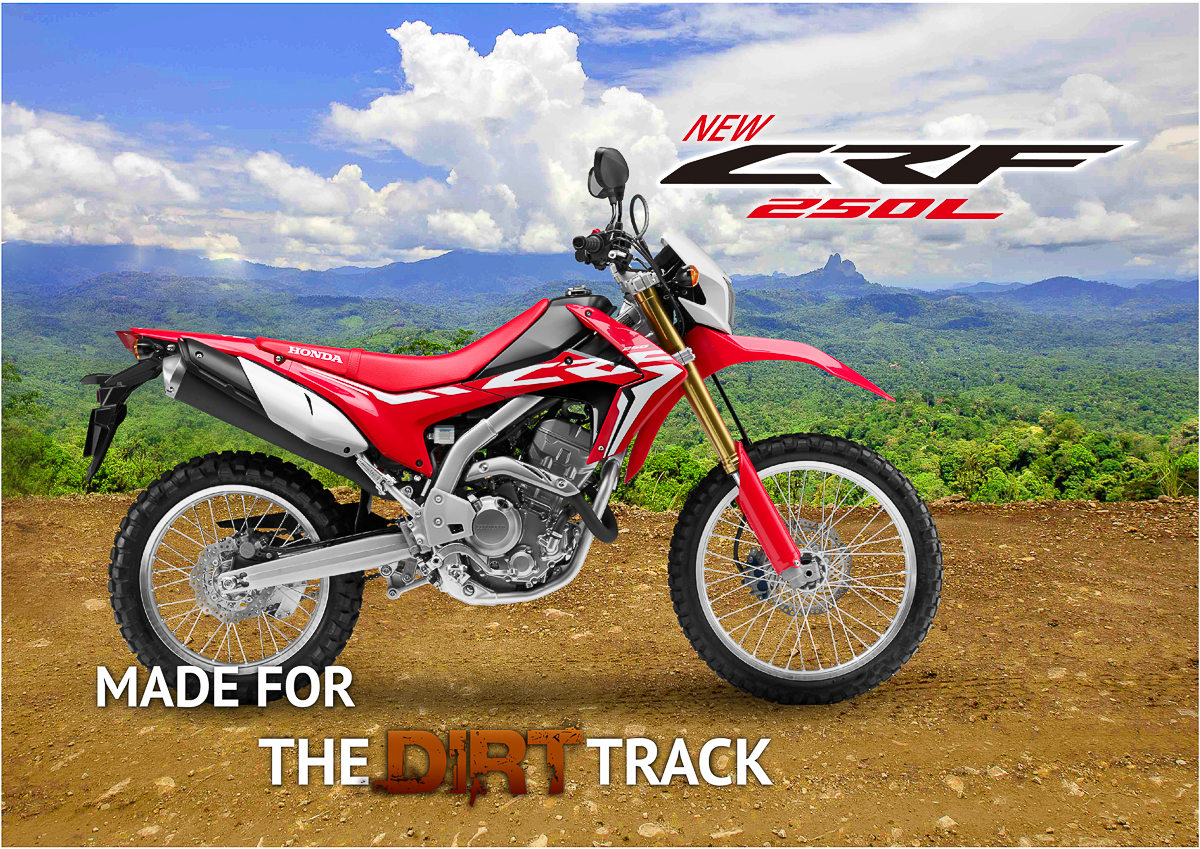 The CRF250L which was introduced to the world back in 2012 has been proven to be quite popular among new and experienced riders looking for that perfect entry-level adventure bike. The 2017 model now comes with modern designs which cater to new younger riders as well as those who are young at heart. 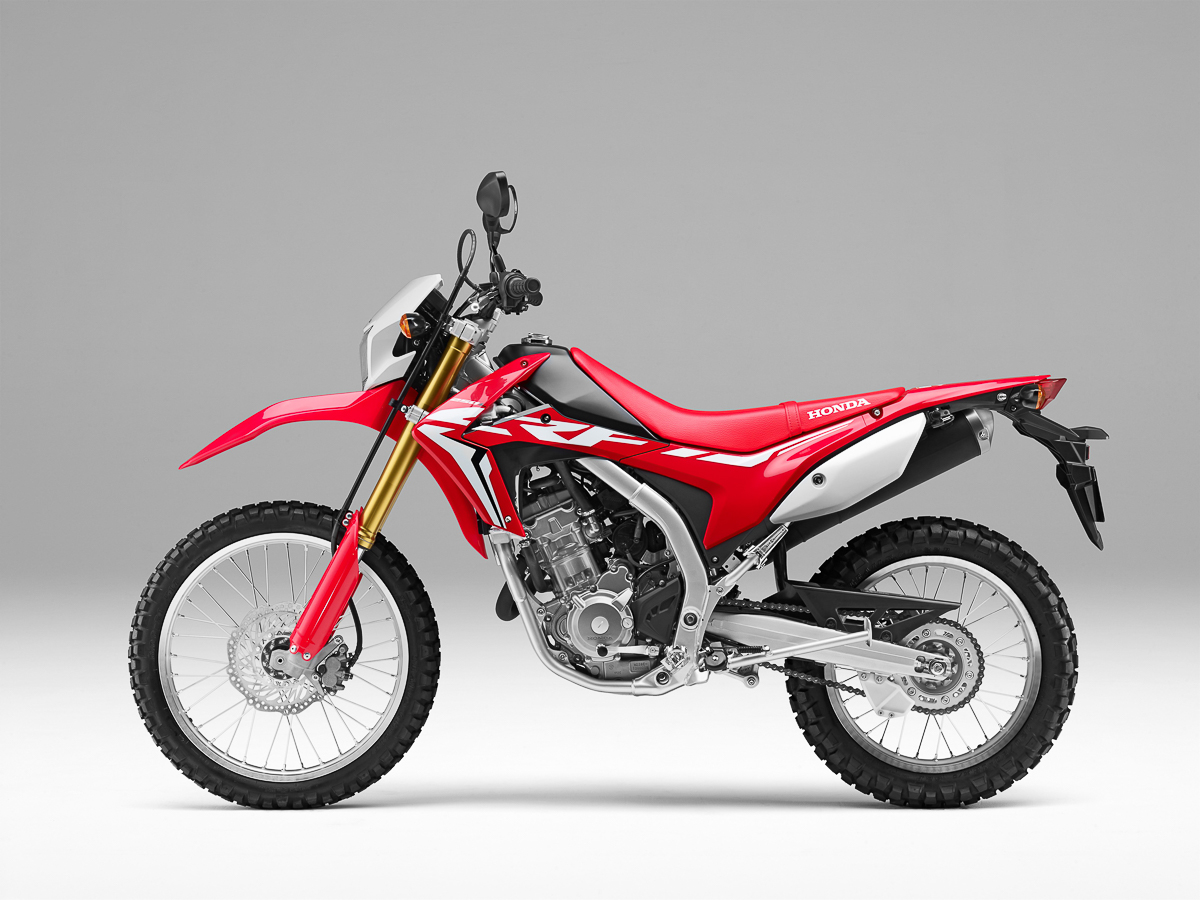 With the demand for lower-capacity adventure bikes that are affordable, the CRF250L was designed to be an all-rounder machine that not only looks good but performs well both on and off paved roads. Together with styling cues taken directly from Honda’s CRF250R machines, the new CRF250L is ready for anything a rider can throw at it whether it’s riding around cities or some off-road adventures. 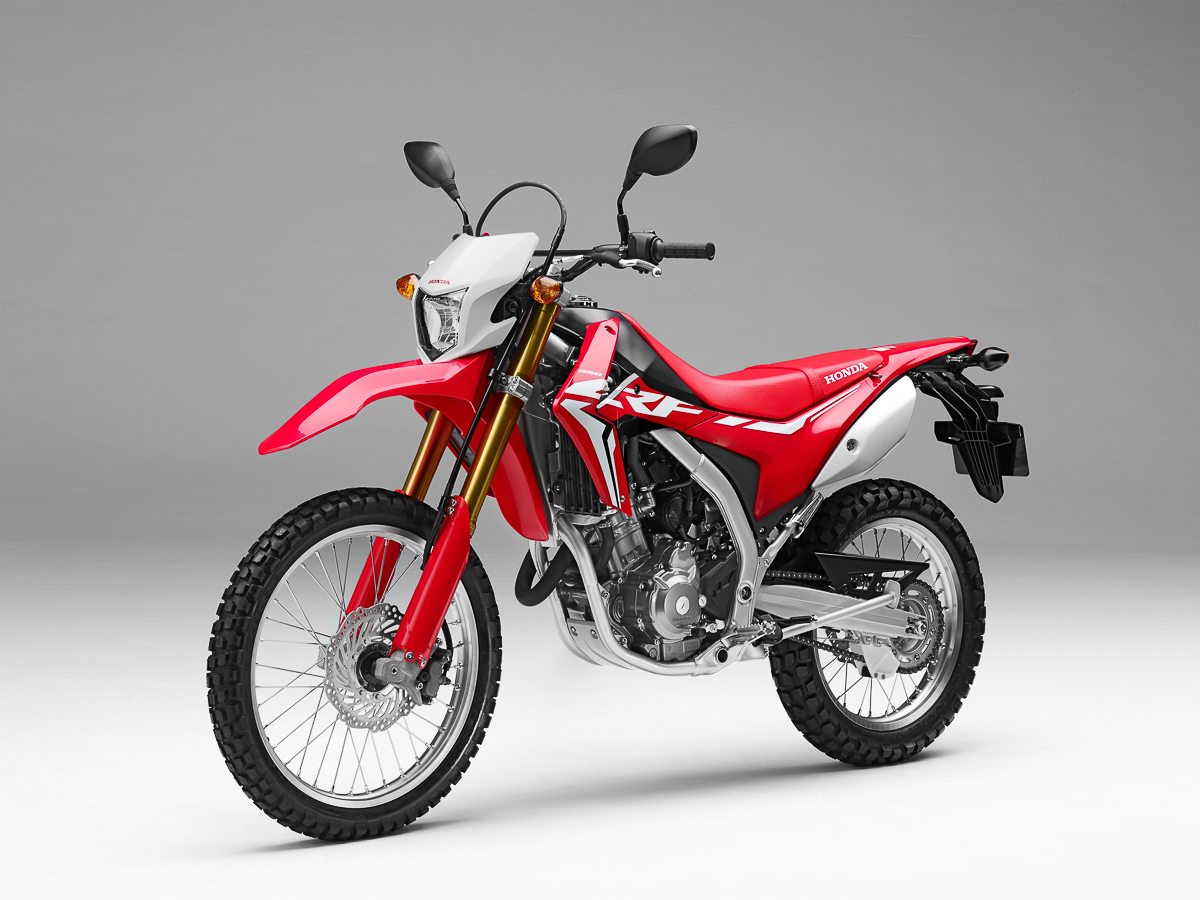 The CRF250L is a true small capacity all-rounder, and as such is built so form and function seamlessly intertwine. Its slim width not only helps it in traffic, but also off-road where the smooth seat/tank interface also allows the rider to transfer their weight freely.

The new CRF250L is powered by a 249cc liquid-cooled single-cylinder DOHC engine which churn out a good 24.4hp at 8,500rpm and 22.6Nm of torque at 6,750rpm. All the power and torque allow for better low to mid power range thanks to a revised Honda’s PGM-FI (Programmed Fuel Injection) plus new air box, connector tune and lightweight exhaust.

Together with its primary balance shaft plus six-speed gearbox and clutch package, the CRF250L offers a comfortable ride with reduced vibrations but tough enough to handle any off-road terrain. Even the radiator has been designed with a cooling ensure to regulate temperatures when riding at lower speeds. 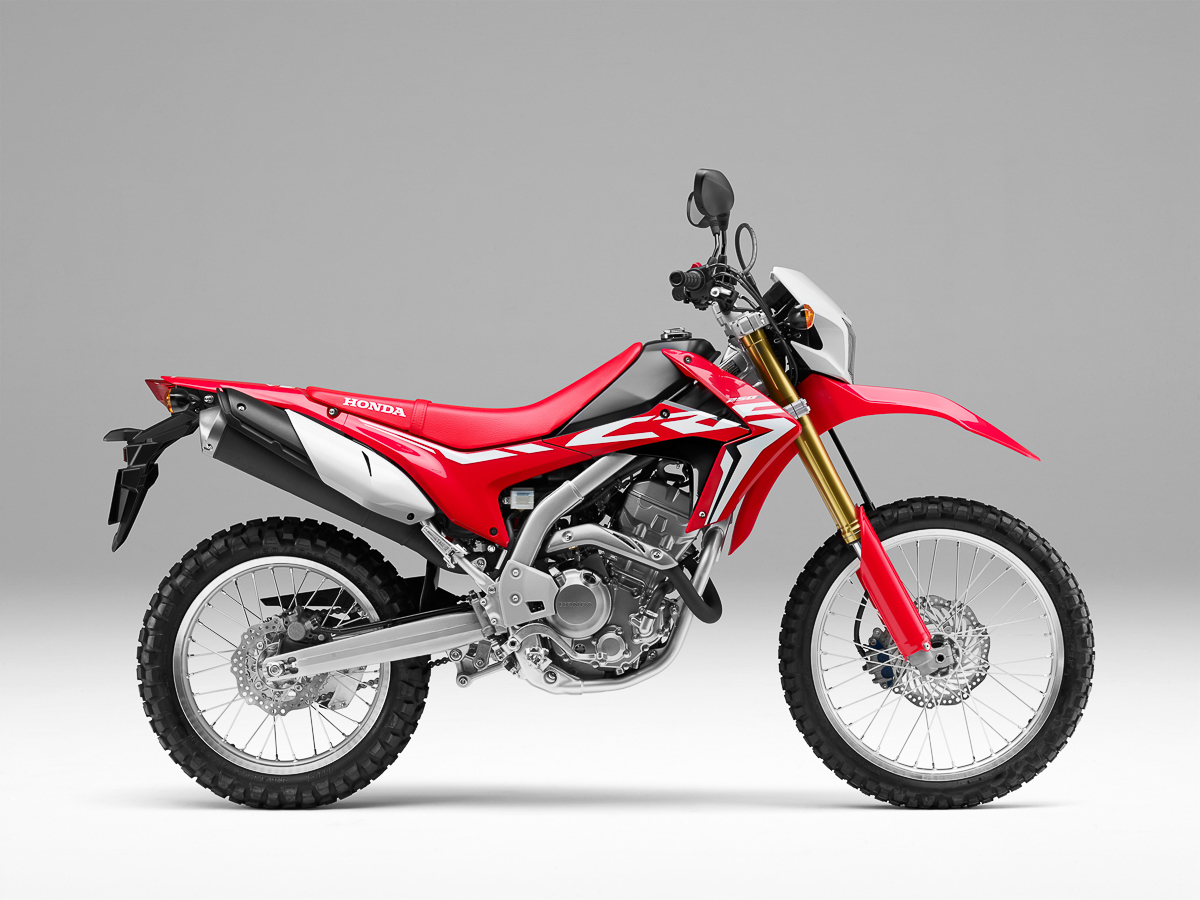 Worried about running out of fuel? Well, the new 2017 CRF250L comes with a 7.8-litre fuel tank that allows a travel distance up to 250km with a single tank of fuel thank to its fuel consumption figure of 33.3km/litre. 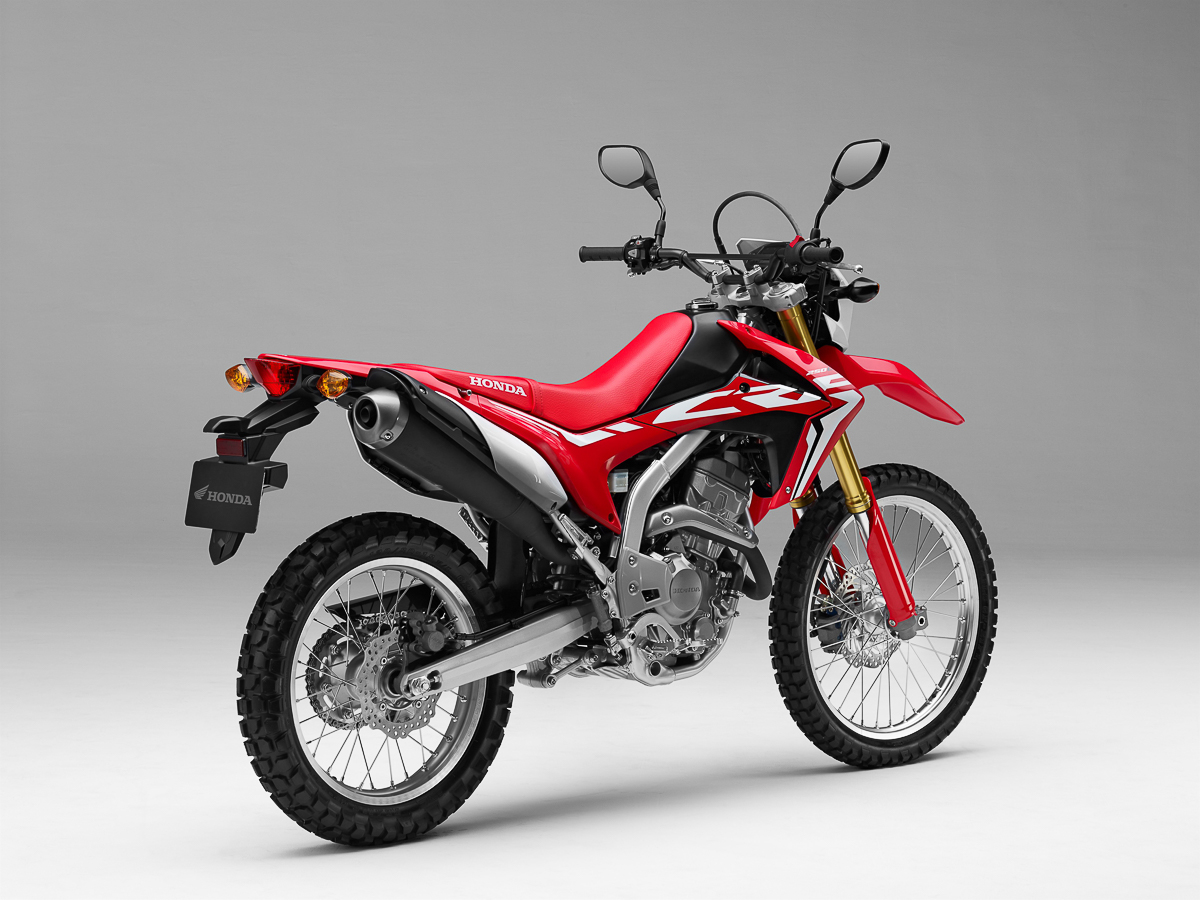 The CRF250L’s frame is constructed from steel, with twin oval-section main spars and a semi-double cradle but new bodywork draws its influence from the minimalism for the CRF450R MX for a sharper, slimmed-down look. A digital dash adds a tachometer and fuel gauge and ABS is fitted as standard, with the option of disengaging it for the rear brake. 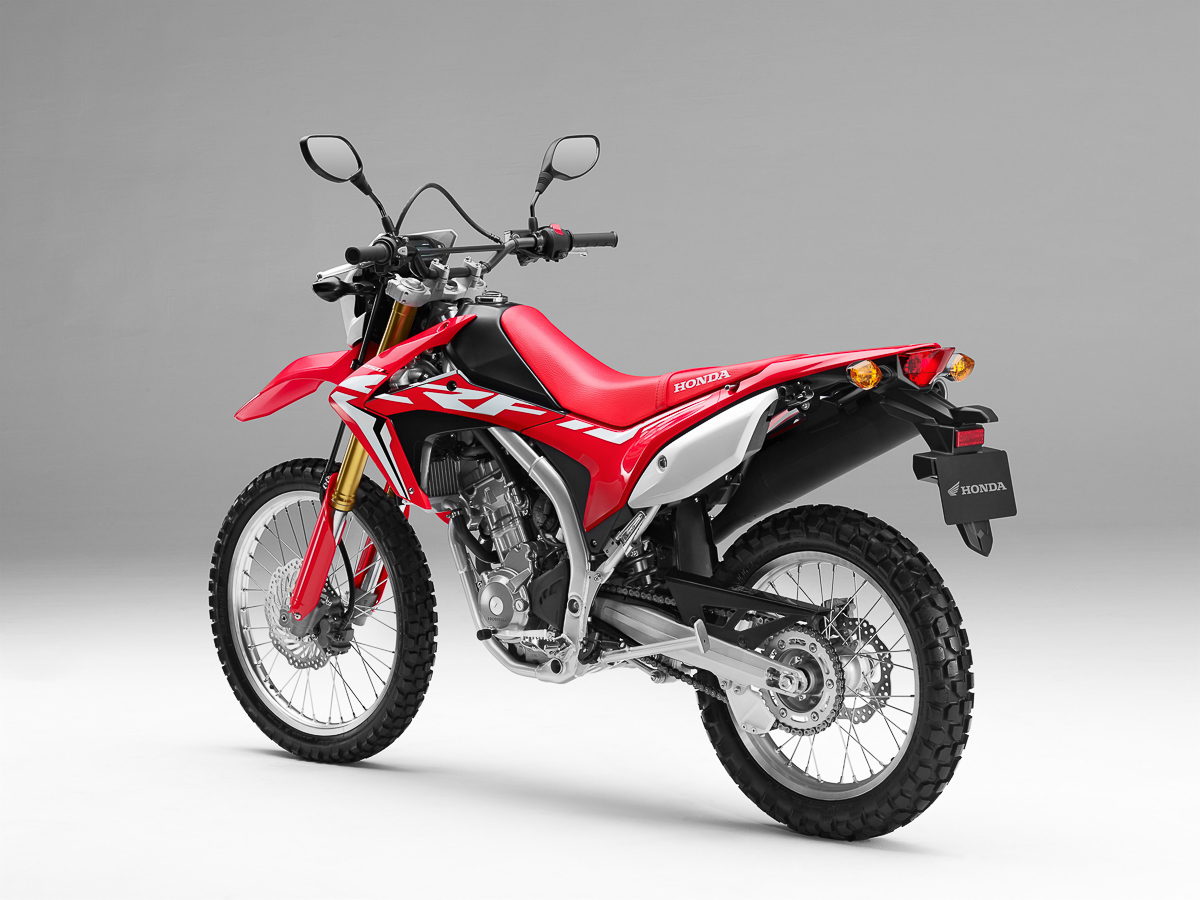 The CRF250L comes finished in Honda’s Extreme Red racing colour as a base, with black and white accents drawn directly from HRC’s factory machines. BSH has priced the 2017 Honda CRF250L at RM24,378.94 (basic price with GST). 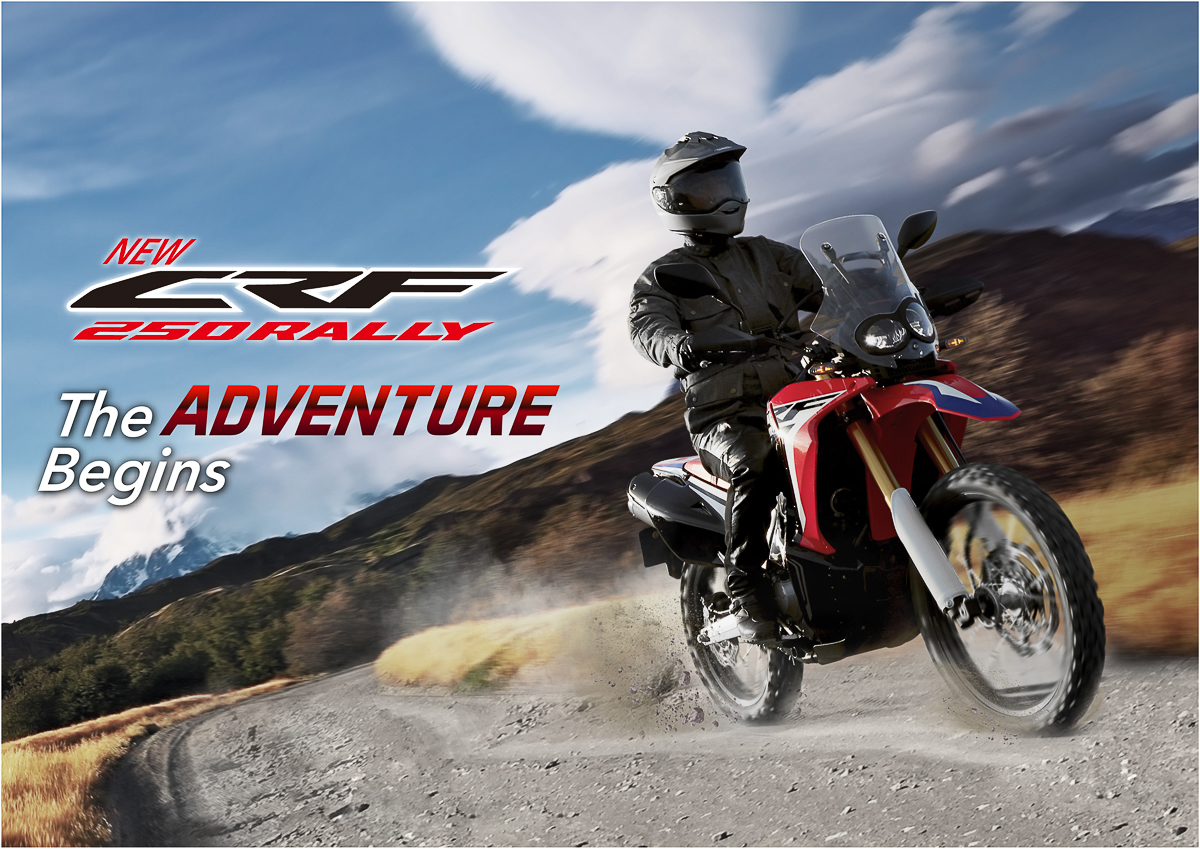 The CRF250 Rally with the motto, ‘Weekend Adventurer” is a Euro4-compliant 250cc dual-purpose motorcycle which opens up a whole new range of two-wheeled opportunities, whatever the rider’s experience level. It not only looks ready to compete in a desert stage, but also delivers a real taste of adventure to riders who prefer a light yet easy-to-manage machine. 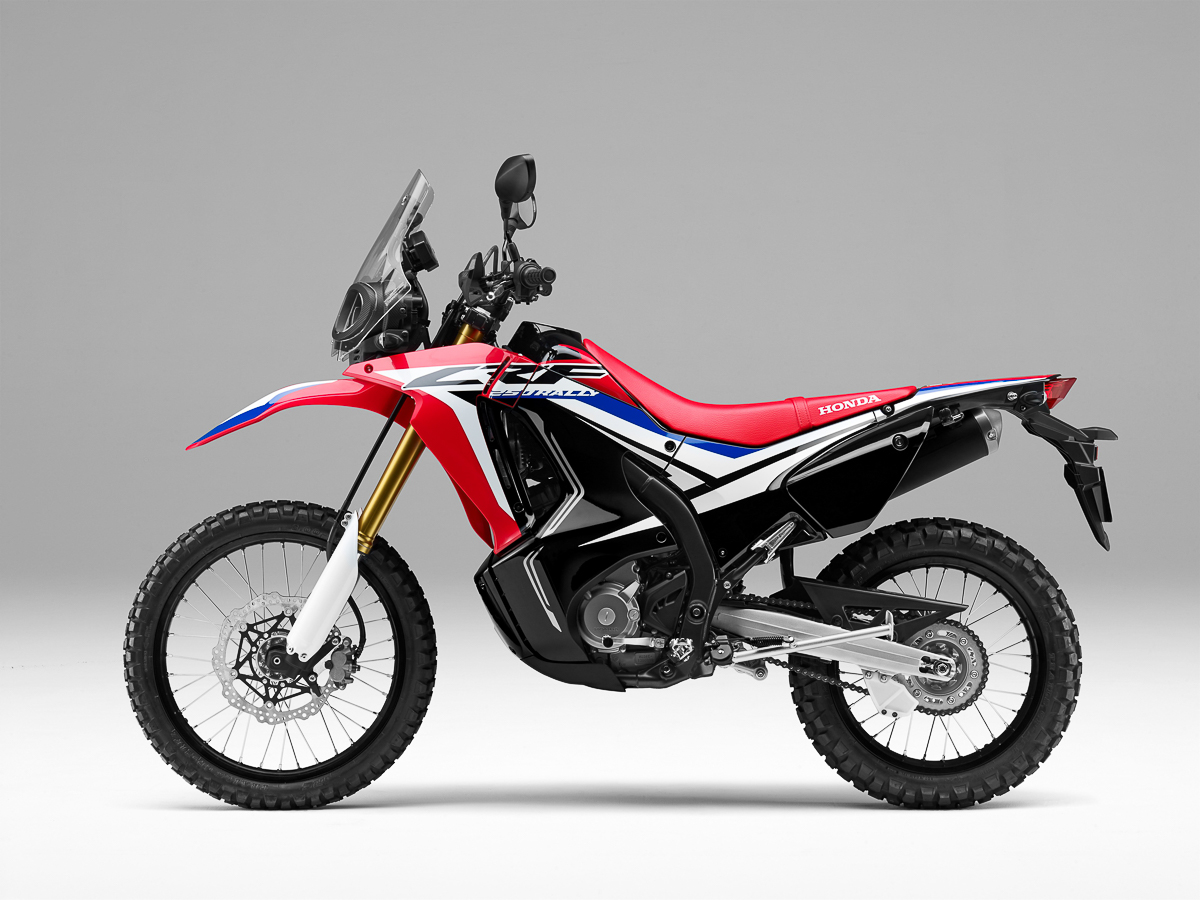 With a similar base as the CRF250L, the CRr250 Rally adds a wide range of changes that make it a unique option especially in the Malaysian market. What makes it even more enticing is the fact that the styling was inspired by the HRC CRF450 Rally race bike. 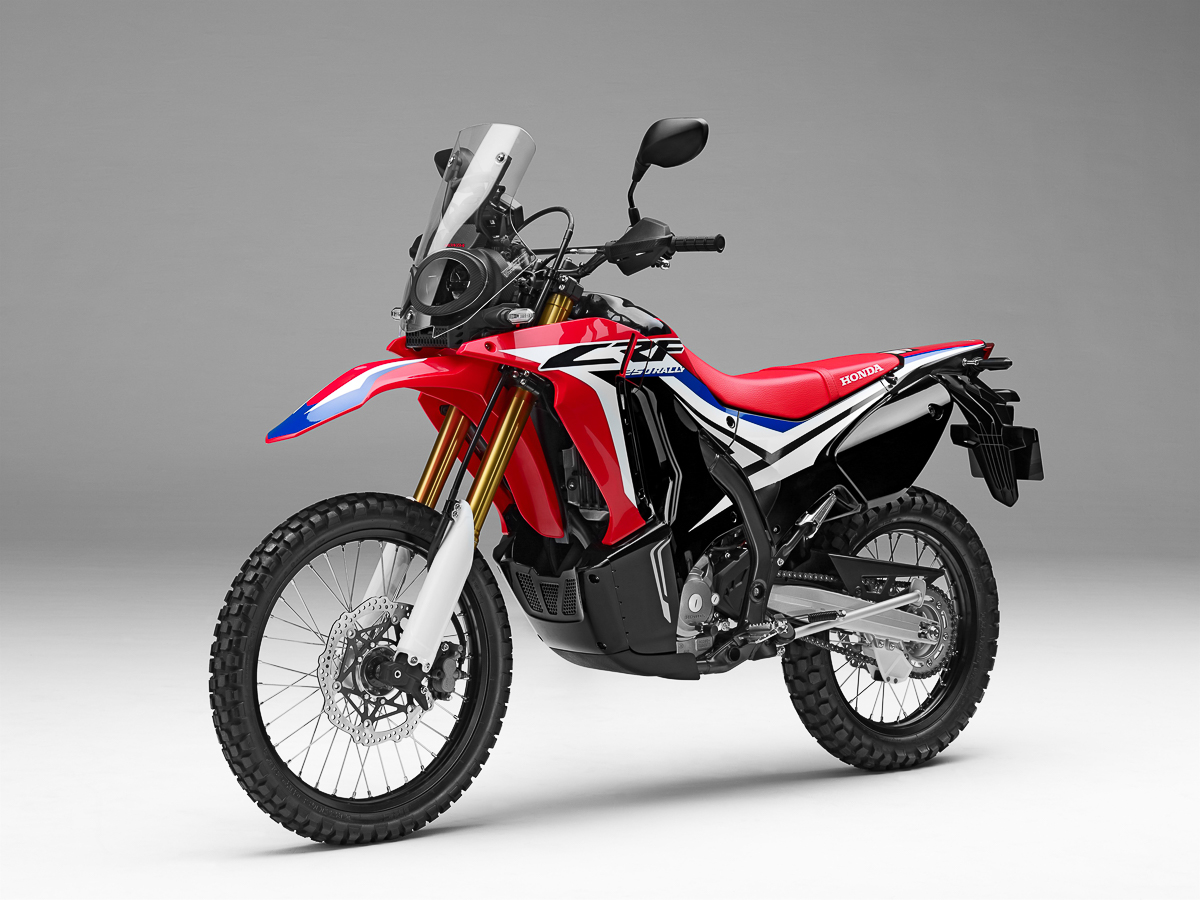 At the front, the ‘floating’ screen, fairing and radiator shrouds provide wind protection, with the rest of the machine showing off minimal yet attractive motocross style. The compact headlight houses an asymmetric dual LED unit where as the rear has been fitted with LED indicators to match. 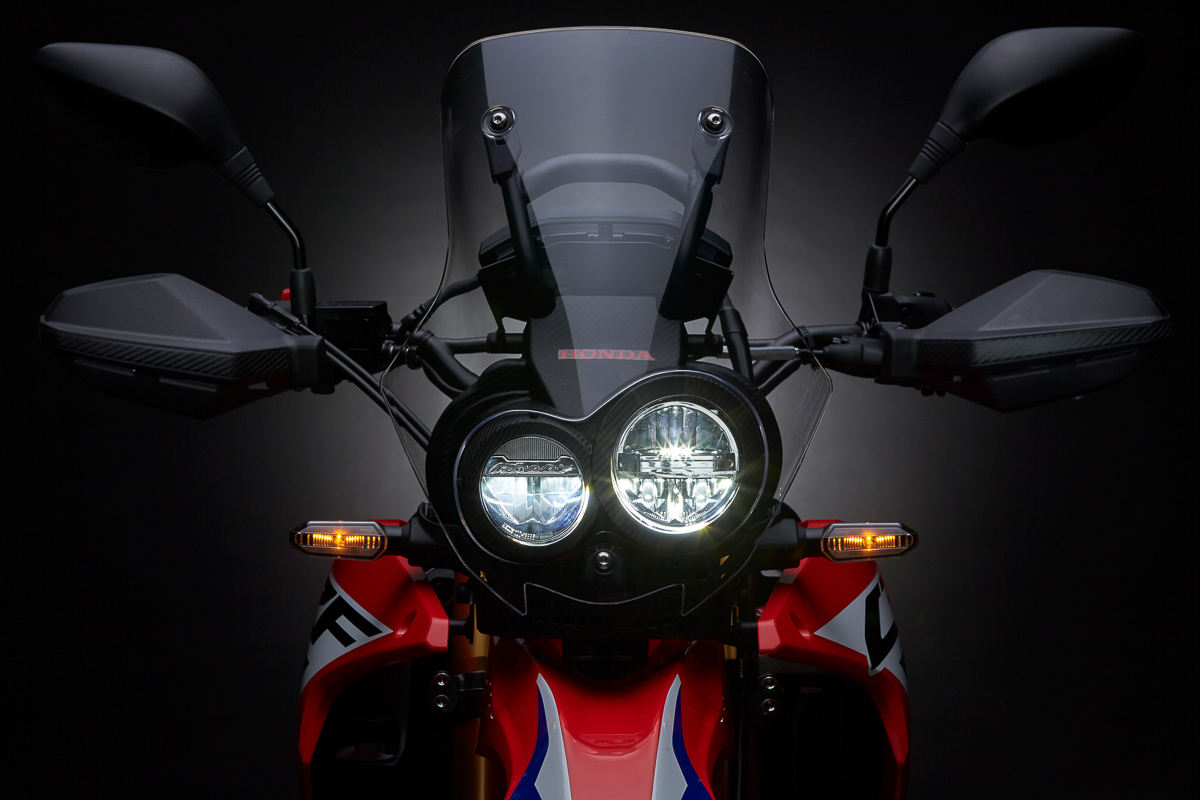 The CRF250 RALLY’s 250cc liquid-cooled single-cylinder DOHC engine’s performance is focused on bottom-end torque and high rpm power, plus a linear delivery that has the same power and torque output as the CRF250L. 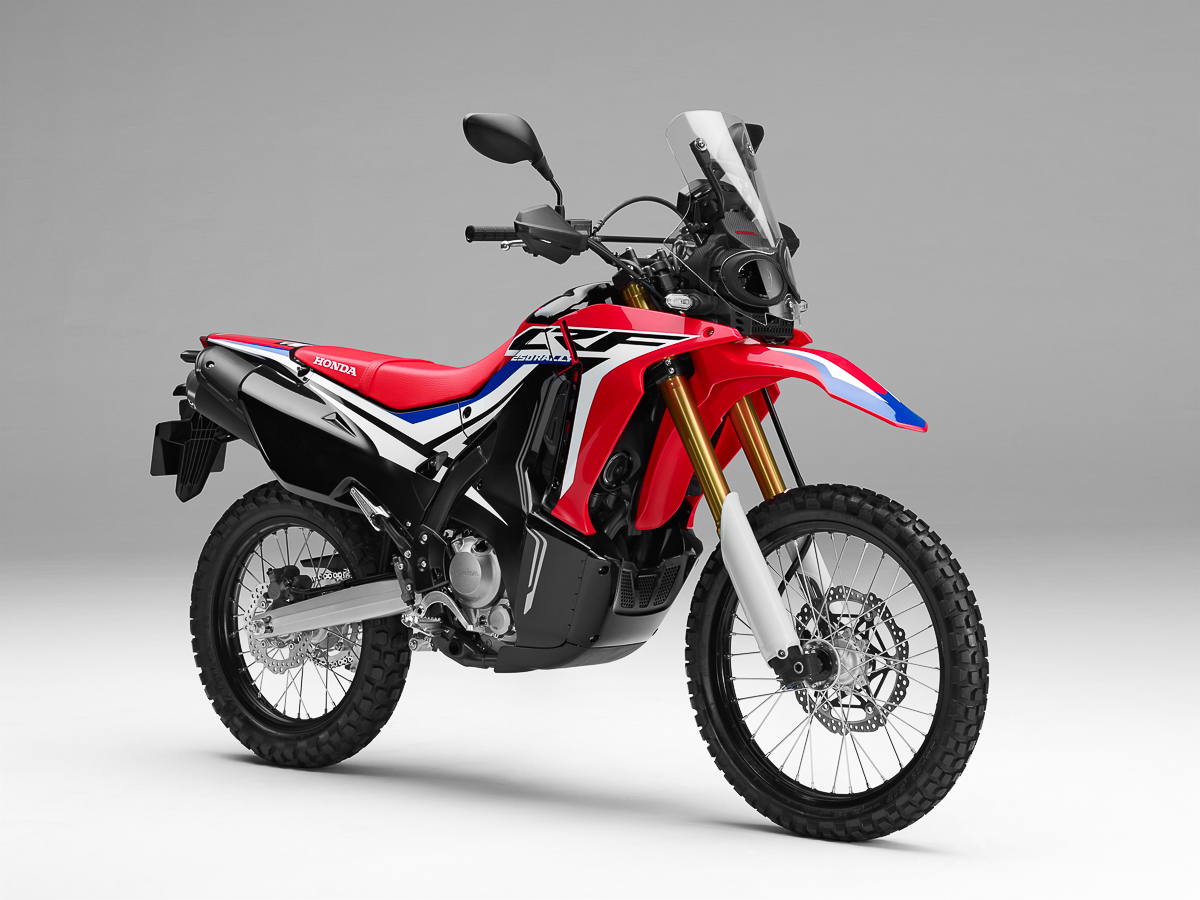 The CRF250 RALLY’s frame is constructed from steel, with twin oval-section main spars and a semi-double cradle. The large fuel tank of 10.1-litre allows extensive range of over 320km thanks to fuel consumption of 33.3km/litre. 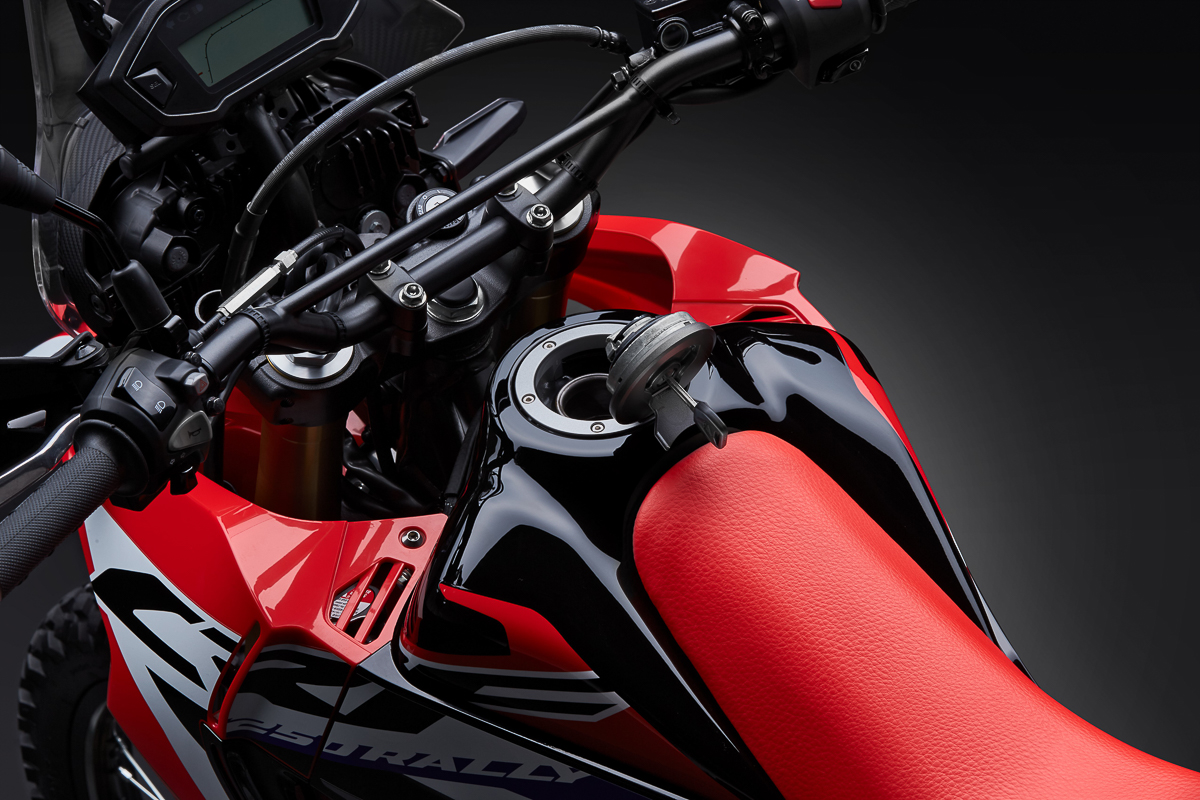 Being a lightweight machine with a wet weight of only 157kg, the Rally also comes with long travel suspension and high ground clearance to further enhance its long-distance off-road ability. Together with a larger floating front disc with ABS (rear ABS can be switched off), the Rally delivers a much more robust dual-purpose package. 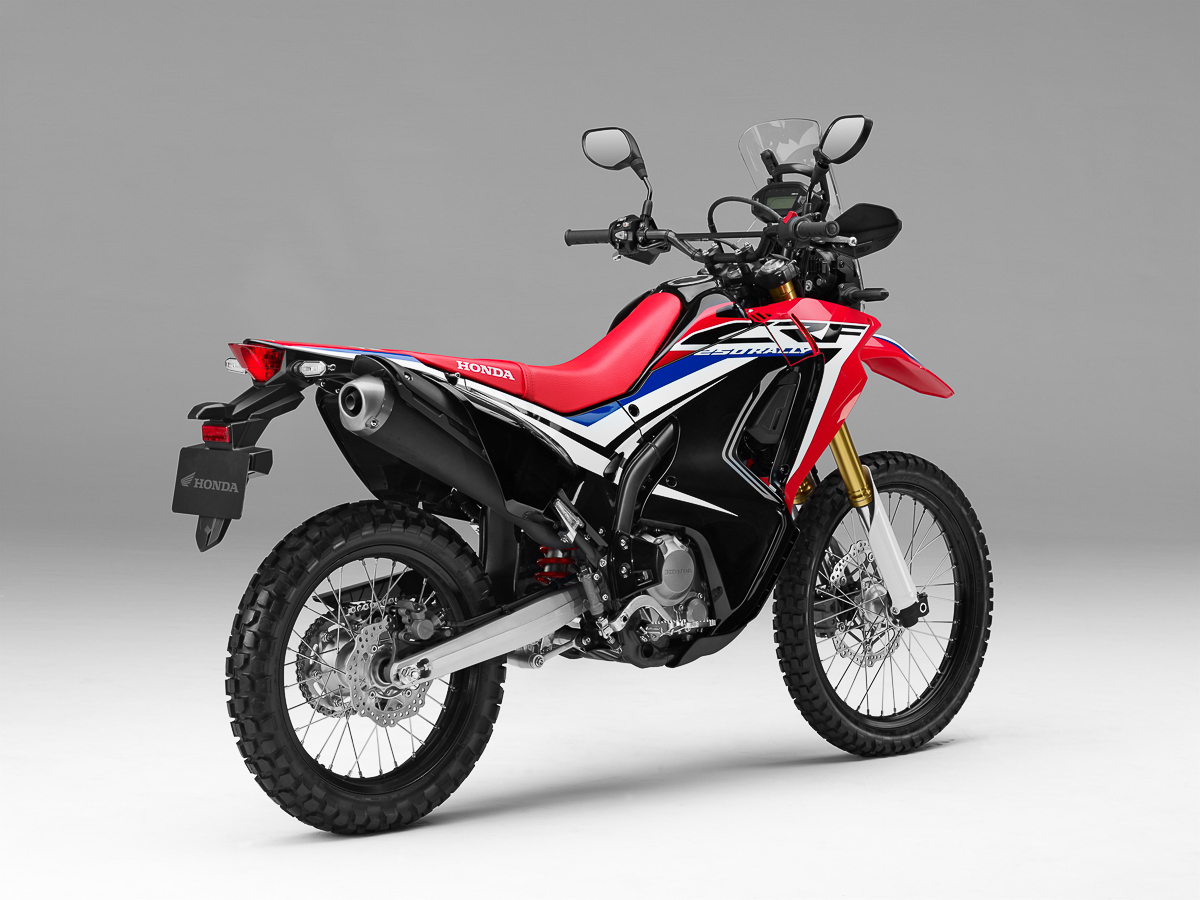 The CRF250 RALLY comes finished in Honda’s Extreme Red racing colour as a base, with black and white accents inspired by the HRC factory machines. Building on the growing appetite for adventure, BSH decided to bring the funky CRF250 Rally designed to be a small-capacity adventure bike for the masses here in Malaysia.

Interested in getting one CRF250 Rally of your very own? BSH has priced this particular entry-level adventure bike at RM28,618.94 (basic price with GST). Both the CRF250L and CRF250 Rally come with two years or 20,000km manufacturing warranty (whichever comes first). 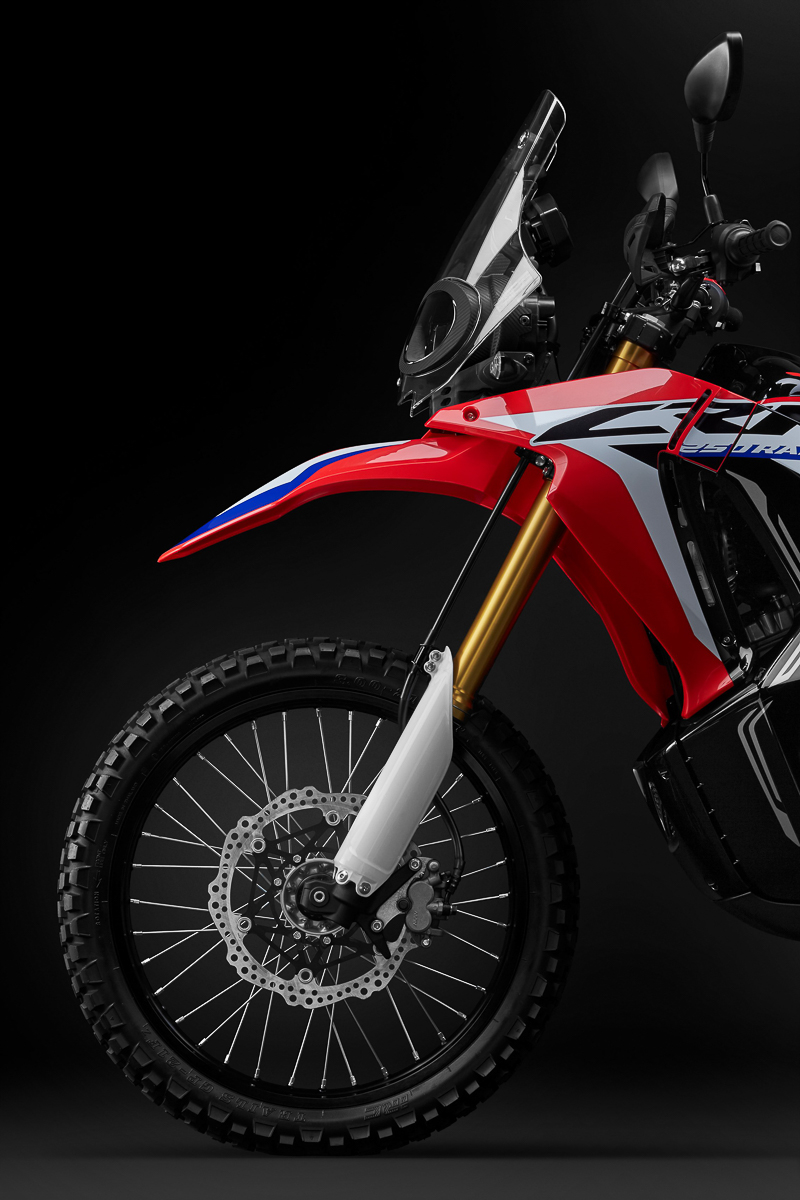 Head on over to any of the authorised Honda dealer showrooms as both bikes are available starting from today (29 August 2017). For more information, head on over to Boon Siew Honda Official Facebook page.