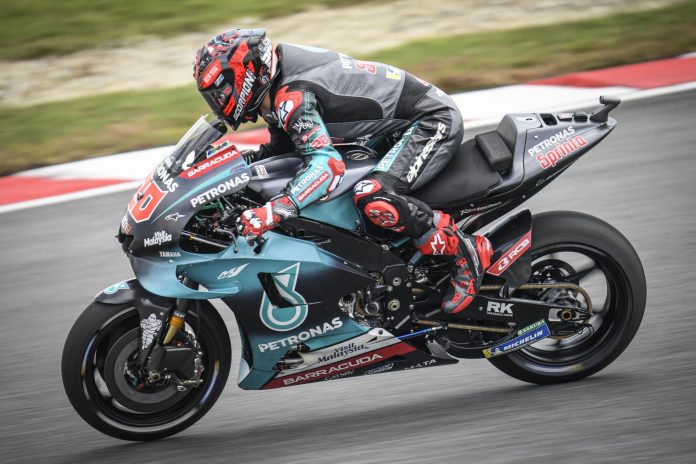 But he was determined to put the target out of his rivals’ reach today and set an almost unbelievable 1m 58.303s lap to be fully certain.

The Q2 session was run under overcast skies and cooler conditions. Consequently, virtually all riders improved on their earlier times and the top 15 dipped below the 2m 00.000s mark.

Quartararo’s teammate Franco Morbidelli had been strong through all practice sessions but was overhauled by factory Monster Energy Yamaha MotoGP rider Maverick Vinalez. The latter’s time of 1m 58.432s was 0.103 second slower than the pole sitter and merely 0.26 second faster than Morbidelli.

Jack Miller put in another strong qualifying effort, ending up fourth on the grid at 1m 58.725s. LCR Honda rider Cal Crutchlow moved up five spots after finishing FP3 in 10th. Valentino Rossi will start his career 401st race in sixth after posting 1m 59.000s. Alex Rins ended in seventh, while Danilo Petrucci moved up through Q1 to finish eighth.

Johann Marco continues to impress on the other LCR Honda by getting straight into Q2 after F3. A crash on Friday and another one earlier today didn’t deter him to score ninth on the grid.

Rounding out the top ten is Andrea Dovizioso who posted a time of 1m 59.173s.

2019 World Champion Marc Marquez high-sided out of the session at Turn 2 and ended up as being eleventh fastest — his lowest starting position of the season.

Qualifying was incredibly close as the top fifteen qualifiers were covered by less than 1 second.