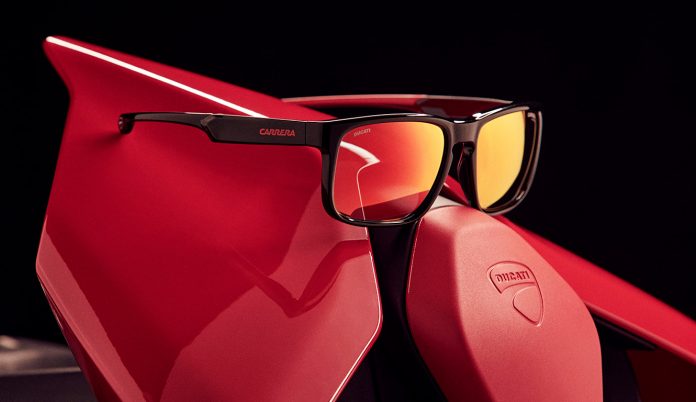 Ducati expands its lifestyle collaboration, this time with eyewear marque Carrera for a series of glasses inspired by the Panigale V4.

Keen eyed Ducati MotoGP fans would know by now that Italian eyewear brand Carrera has latched on as an official partner to the Ducati Lenovo MotoGP team in 2022. Now, said partnership has bore its first fruit in the form of a series of stylish eyewear with Ducati co-branding.

According to Ducati, the new range of co-branded eyewear made by Carrera sees its design inspired by the Italian two-wheeled purveyor’s signature and flagship superbike the Panigale V4. Specifically, the temples of each eyeglass frame have been modelled after the profile of the Panigale V4.

Moreover, Ducati and Eyewear both claim that each frame design were crafted specifically so they’ll fit nicely under your favourite motorcycle helmet – good news for Ducati riders who wear glasses whilst riding their prized Desmo machines indeed.

The partnership’s extent into MotoGP also means these exclusive eyewear line sees both its lead MotoGP riders – Jack Miller and Francesco ‘Pecco’ Bangania – appearing in promotional materials for this line of glasses.

The range itself consists of five regular models and one limited-edition model. Available in four colourways each are the Carduc 001/S, Carduc 002/S, Carduc 003/S, Carduc 004/S, and Carduc 006/S, ad all are compatible with both regular dark lenses and powered prescription lenses too.

As for the Ducati-Carrera Limited Edition Superlight glasses, just 500 pieces were made and all have reportedly been spoken for. This model only came in a single colourway – Grey Red. These special frames were made from a combination of carbon fiber and titanium to keep weight at an absolute minimum, but these were not available for fitment with powered prescription lenses.

Keen on copping a pair to match your prized Ducati? These Ducati eyewear by Carrera are will be available directly from authorised retailers, as well as the latter brand’s online store, this year. Price and availability typically vary according to market region.

It goes without saying, these sunnies will match well with the limited edition Bulgari Ducati timepiece released earlier this month too…