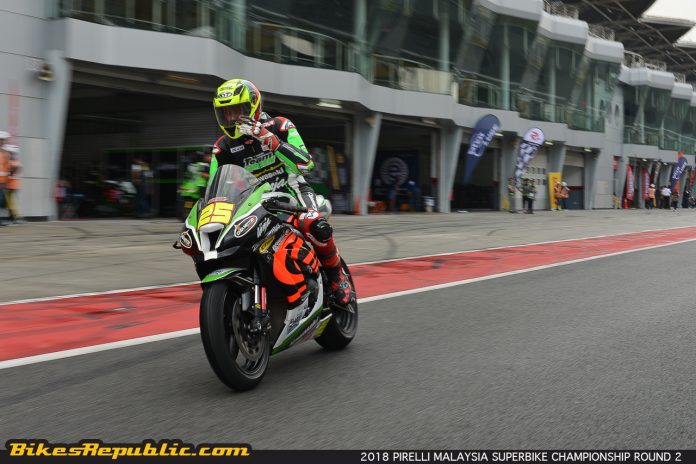 If there’s any indication of tomorrow, today’s (Saturday 28th July 2018) track action in the 2018 Pirelli Malaysia Superbike Championship (MSBK) Round 2 at the Sepang International Circuit (SIC) demonstrated just how much excitement will be in store tomorrow (29th July 2018). 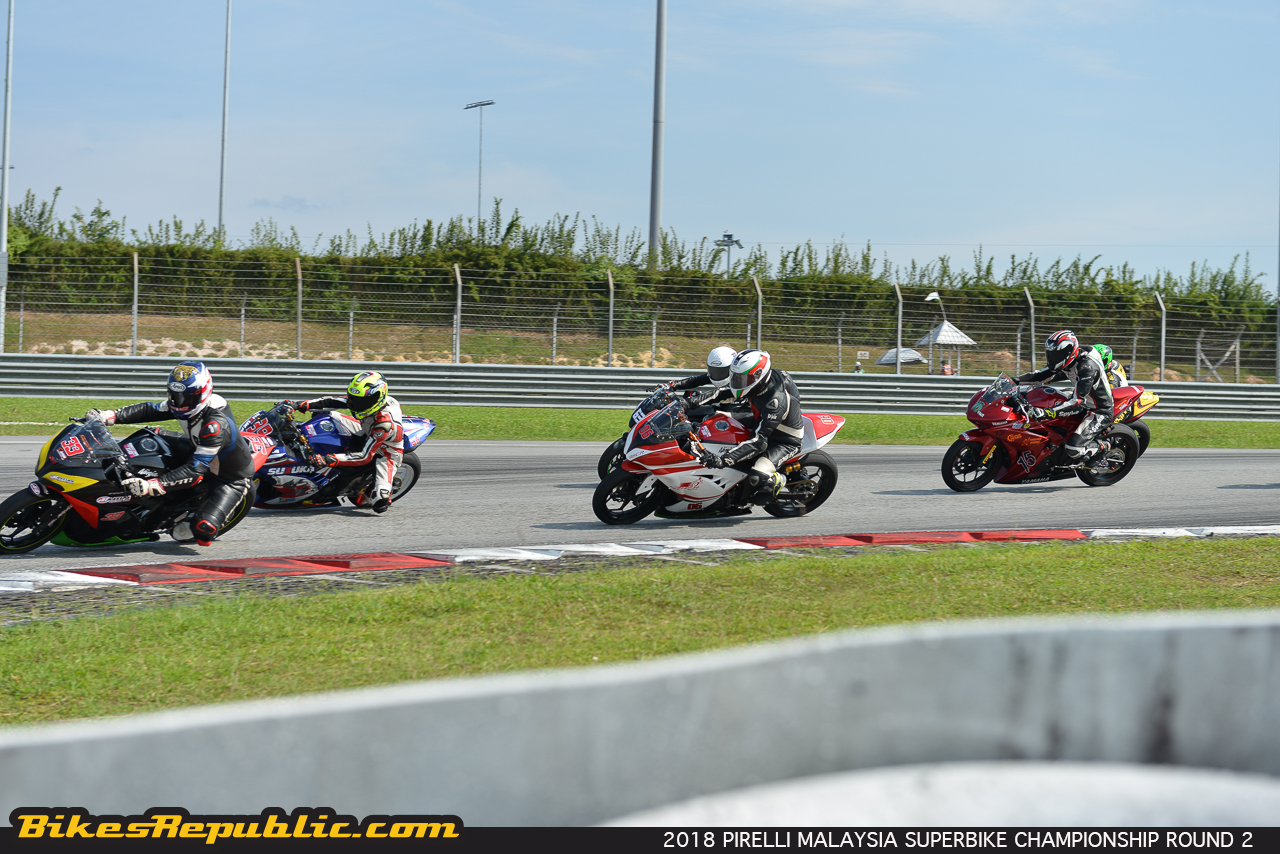 The morning started with another torrential downpour like the one during Round 1, forcing the riders to go out on Pirelli Diablo Rain tyres and getting fully drenched. They had to do so to gather setup data in case the rain continued throughout the day. 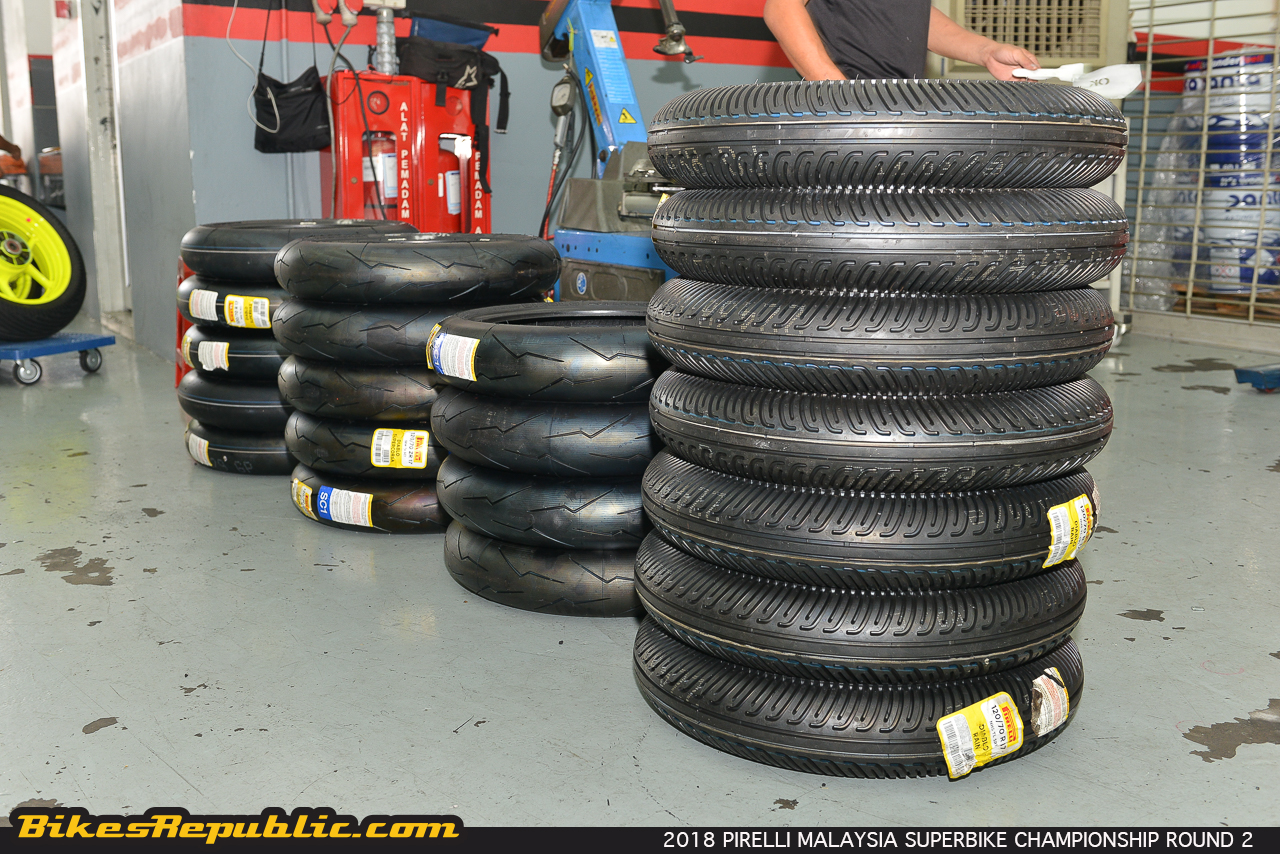 Of important note, SIC has revised the race program for the MSBK series, featuring Free Practie and Qualifying on Friday, Race 1 on Saturday and Race 2 on Sunday for all classes apart from the TOC Desmo Cup. 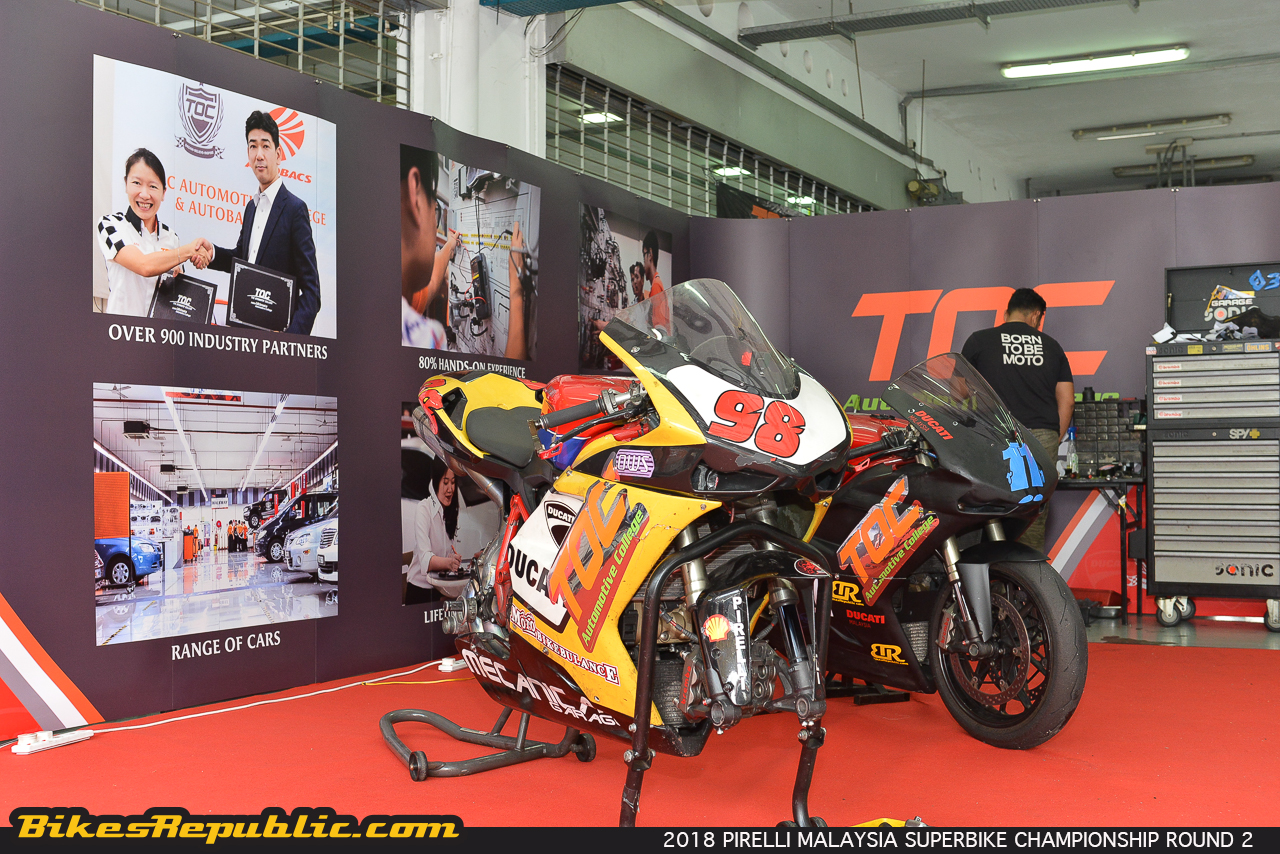 The ATC riders were the first to hit the track for Race 1 at 1pm. The rain had stopped by this point and the track was drying quickly. 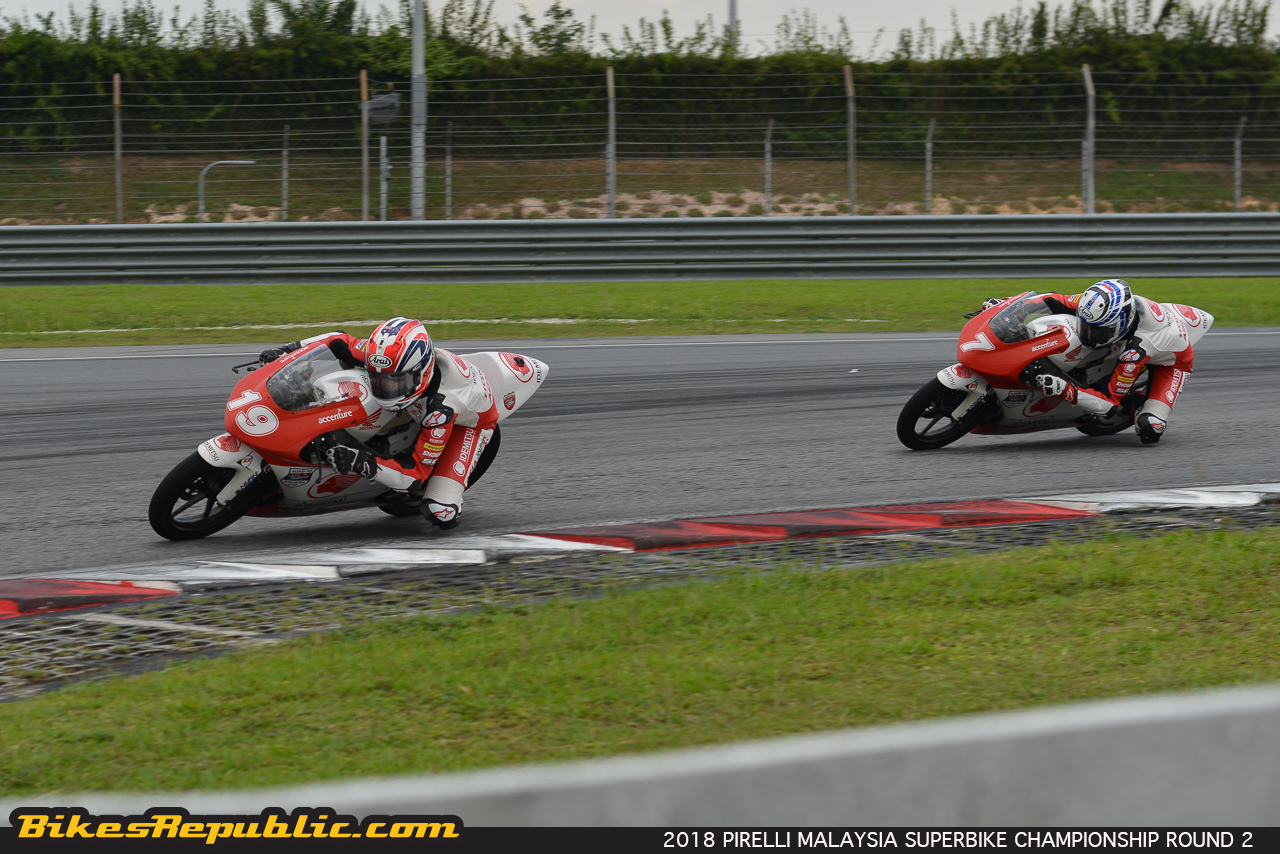 Characteristic of the ATC, the teenagers fought tooth and nail from the green light. However, Mario Aji (#7) from Indonesia and Bill Van Eerde from Australia (#19) managed to break free of the chasing pack halfway through the race.

The pair then started trading the lead with some almost impossible and heart-stopping passes. However, Aji turned up the pace in the last few laps (recording his best on the final and 13th lap) to keep Eerde at arm’s length, to finish 1st and 2nd, respectively. 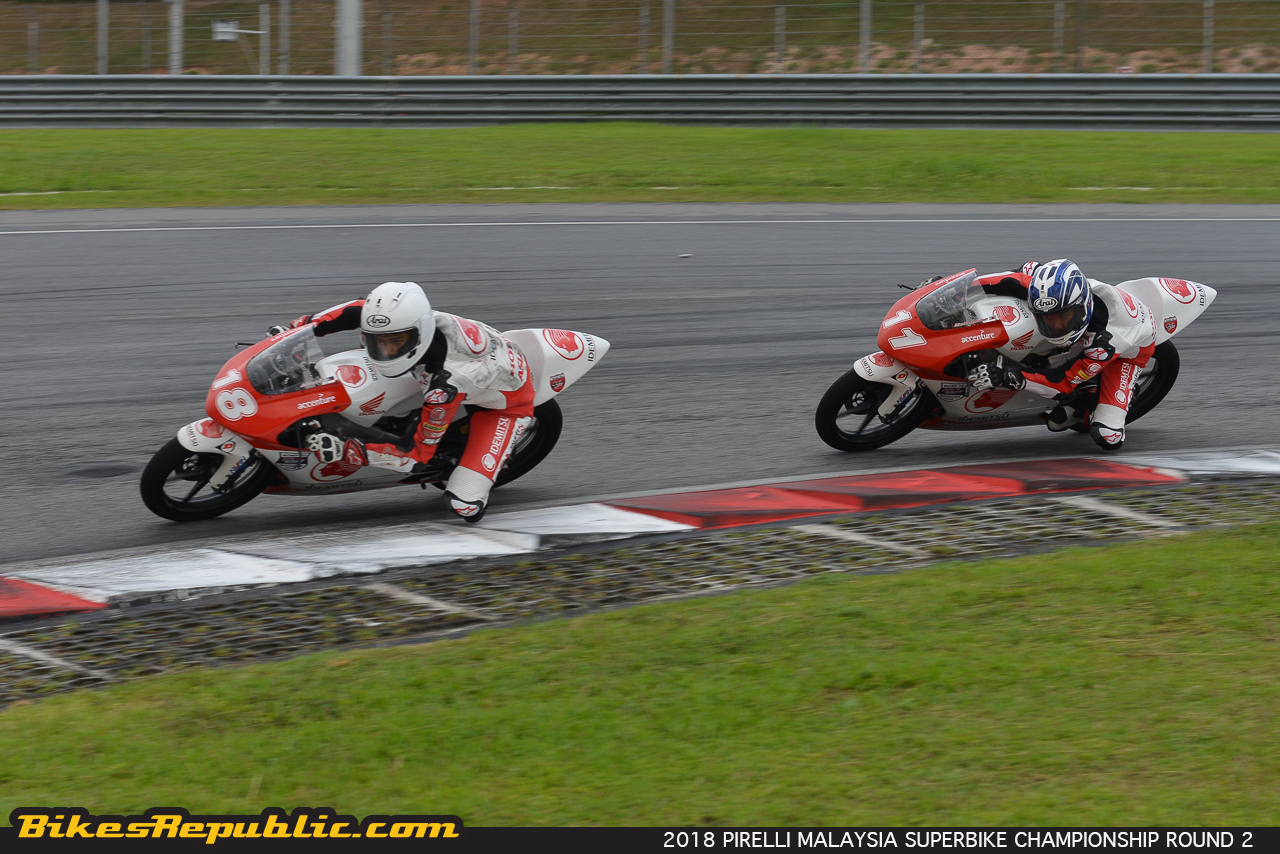 In 3rd was Malaysian Danial Sharil (#21) who did well to fight off the other riders and found space to ride a steady race to finish 5 seconds ahead of the 4th place man, Lucky Hendriansya (#13) also from Indonesia.

This class is open specifically for Ducati owners to test their skills in a competitive environment. As mentioned earlier, the Desmo owners went out for Qualifying today. It was an awesome sight and aural pleasure to hear the Thundering Twins roaring around the Sepang International Circuit. 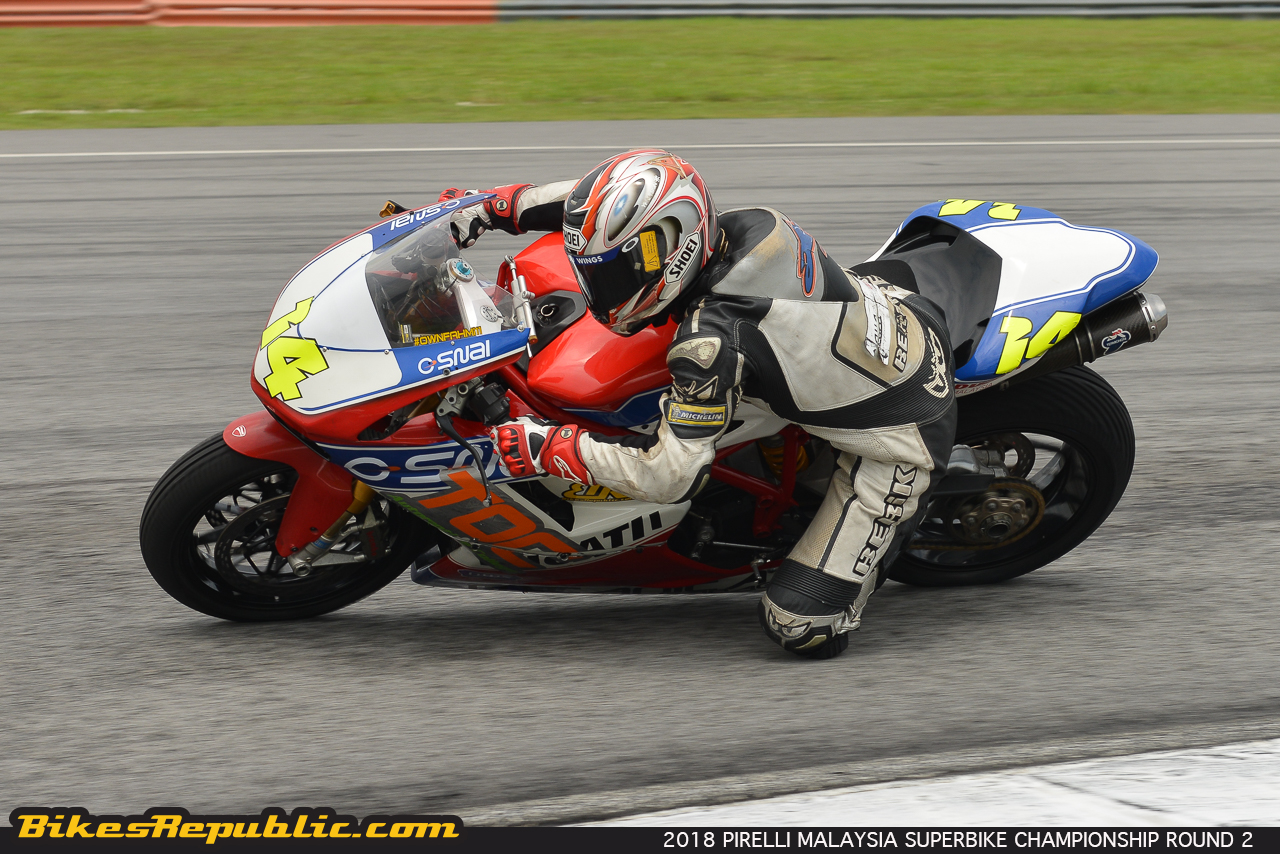 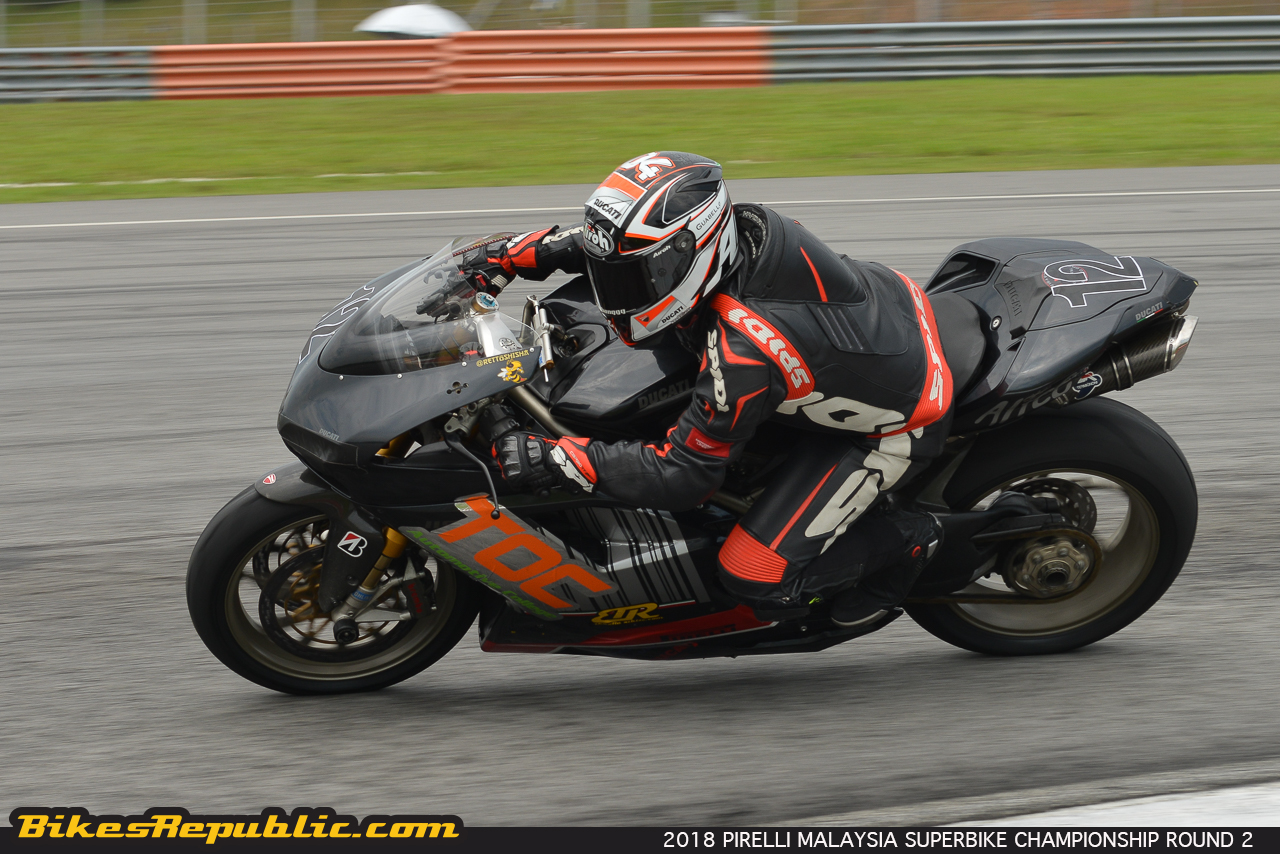 It was an important affair for both the Desmo Owners Club and TOC Automotive College as TOC supplied the technician workforce which consisted of their lecturers and students, allowing them to get their hands on racebikes as part of their education. Desmo Cup participants, on the other hand, have experienced lecturers working on their bikes.

The TOC Desmo Cup race will be held tomorrow.

The big news prior to this weekend was Malaysia’s current Moto3 rider, Adam Norrodin would be racing in this 600cc class.

But Muhammad Helmi Azman (#32) had different plans as he blasted into the lead when the red lights went out, trailed by Adam and the rest of the field. As the race progressed, Helmi kept his blistering pace to open up a huge lead, which he held on to win the race. 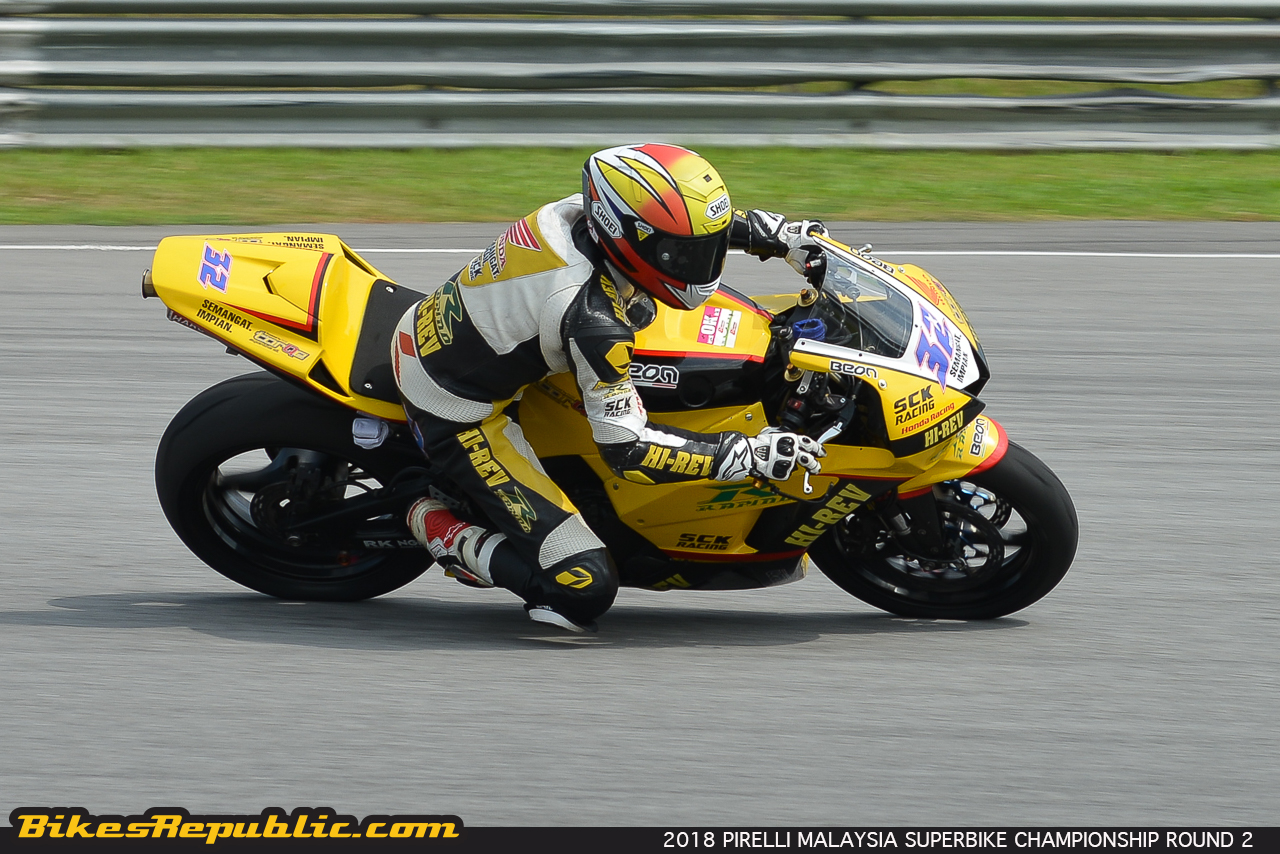 Fakhrusy Syarikin Rostam (#66) had been shadowing Adam for many laps until he overtook the latter with a daring move into Turn One. The pair then started trading places until the last lap when Adam managed to capitalize. 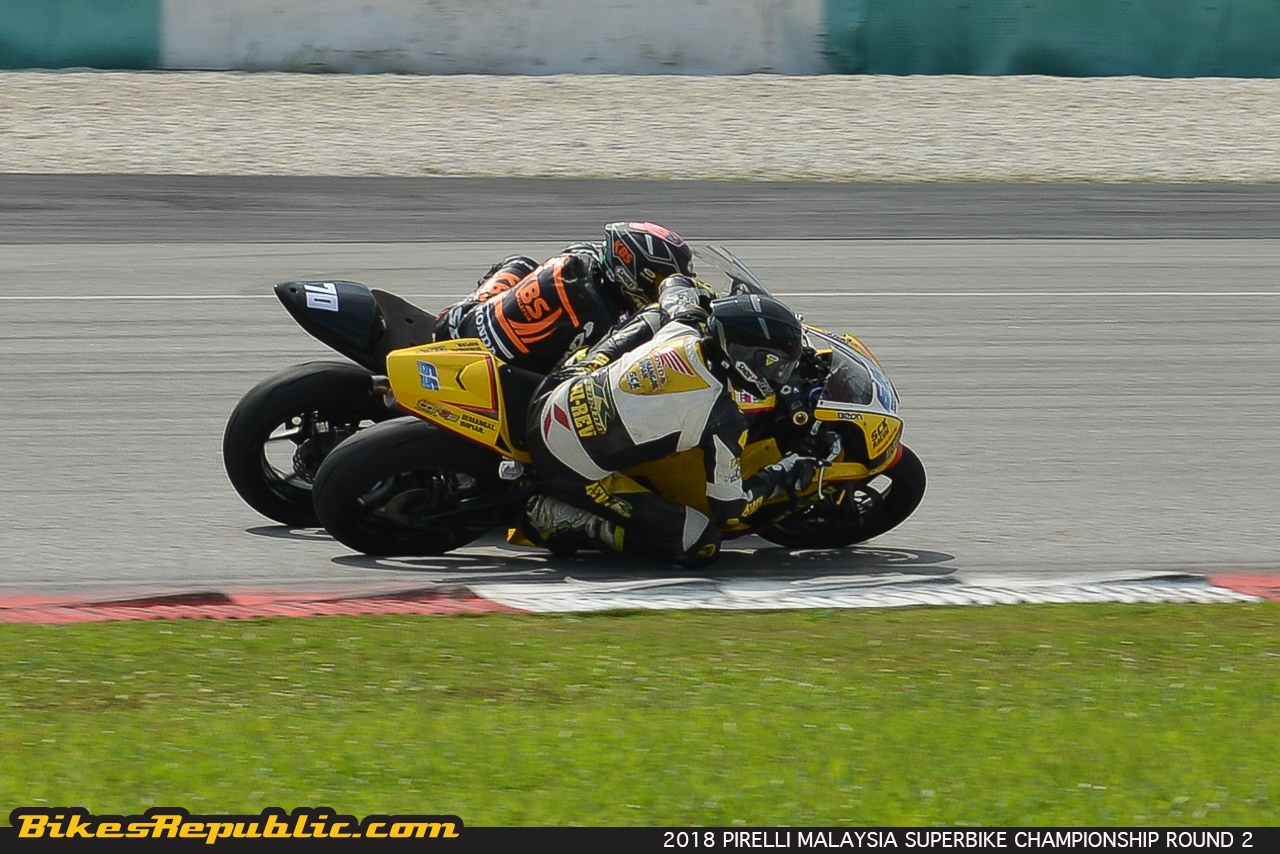 Adam came home 2nd with Rostam less than 0.2 second behind him. 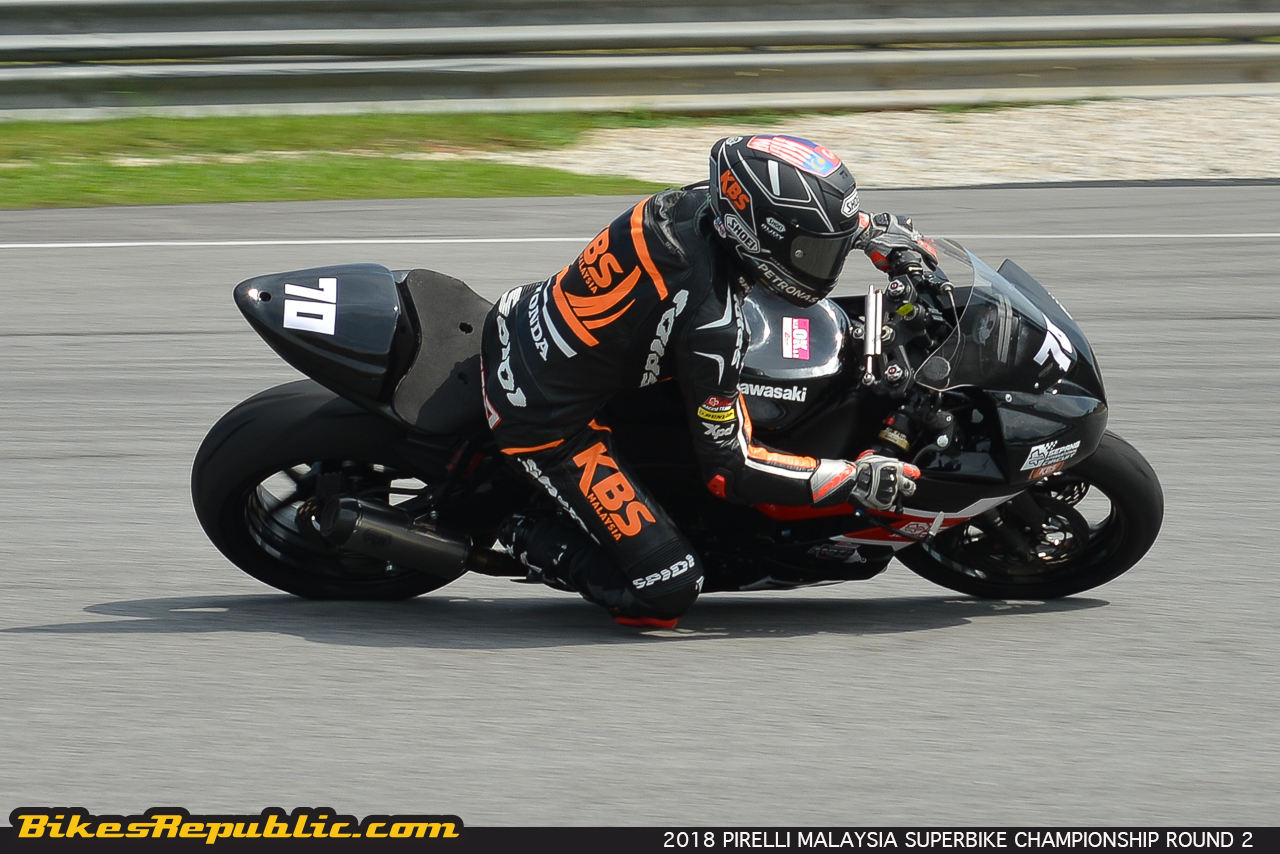 It’s time for the ultra-competitive, hence ultra-entertaining Super 250 class in mid-afternoon. Competition is extremely close (and cutthroat) as the bikes are closely matched in terms of horsepower, meaning one has to work really hard to break away.

And fought they did, from even before they started braking for Turn One on the opening lap! The competitors banged fairings and elbows into Turns One and Two, almost causing a couple of crashes. 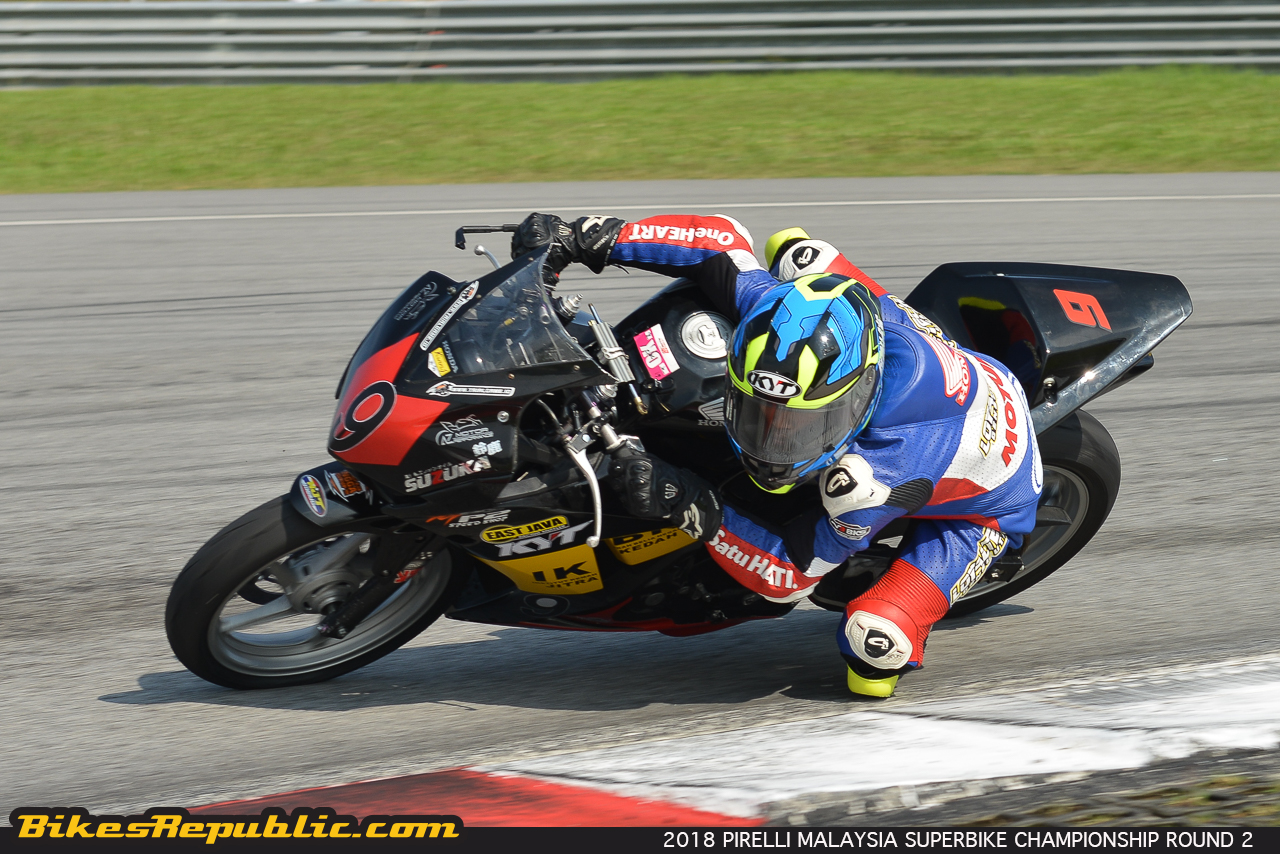 Championship leader, Indonesian Surya Narayana (#9) fought his way through to lead from Turn Two and held on to the finish, although he was hounded closely Jailani Kosma (#71) from Malaysia. Narayana kept his nerve and crossed the finish line as the winner with Kosma 0.5 second behind. 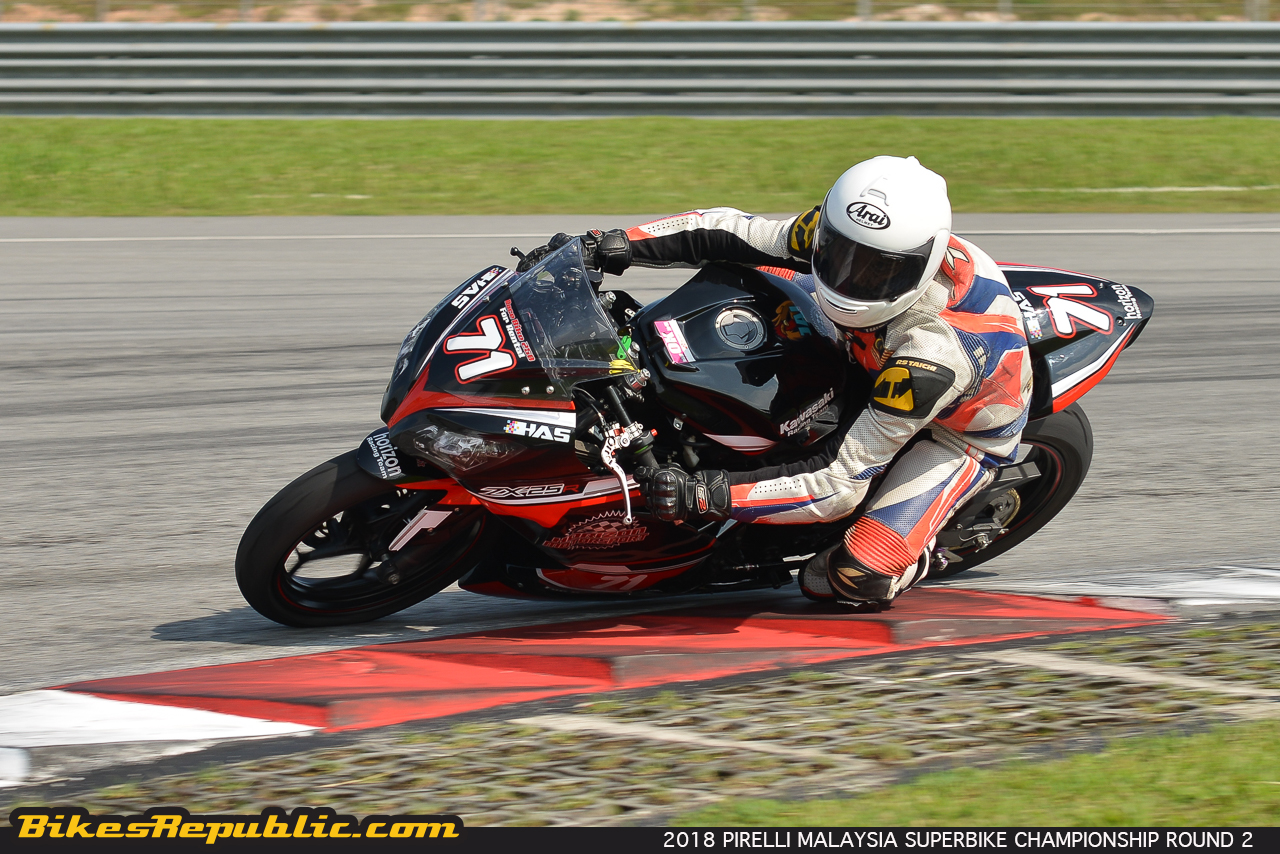 There was pandemonium as the riders fought each other hard, until Yokeshwaran K (#6) from India crashed hard just after the apex for Turn Two, causing the field to slow down and string out. 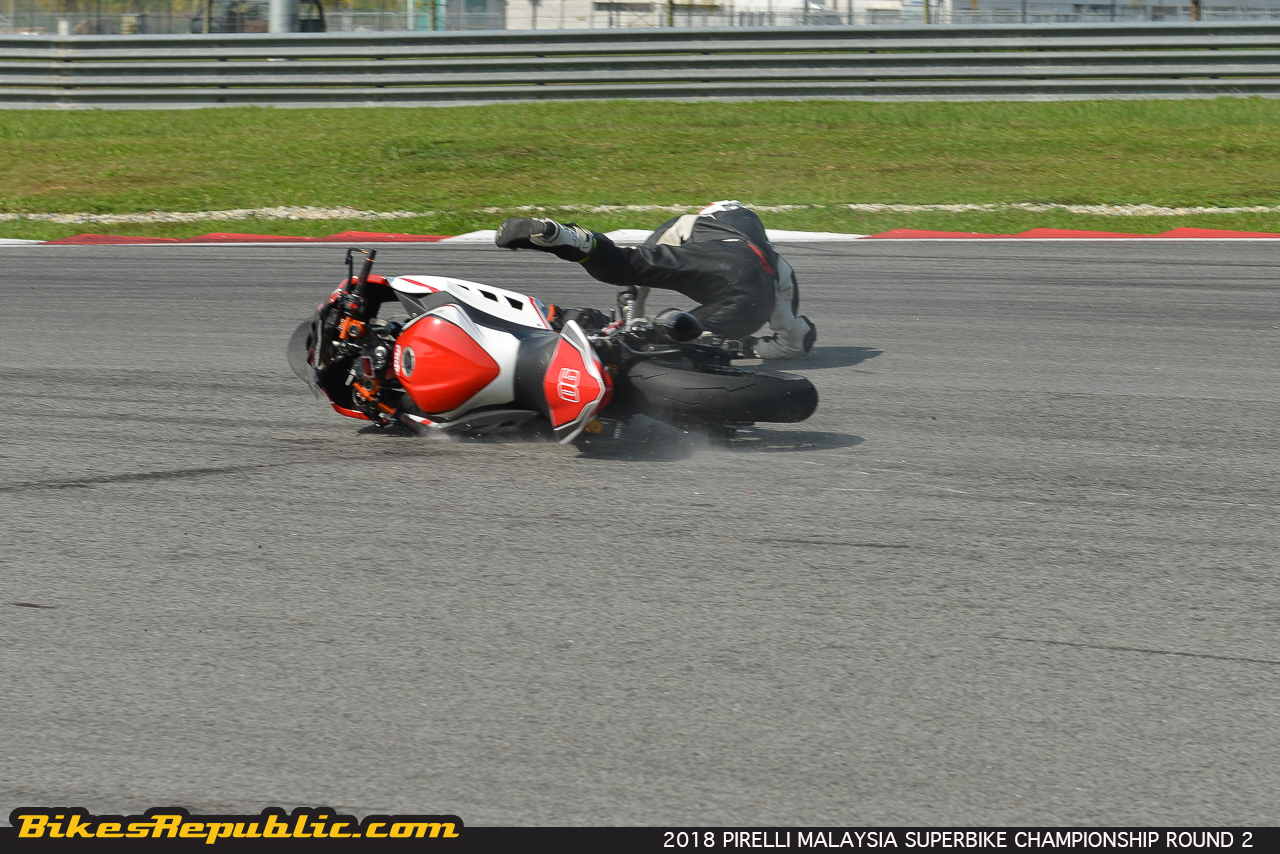 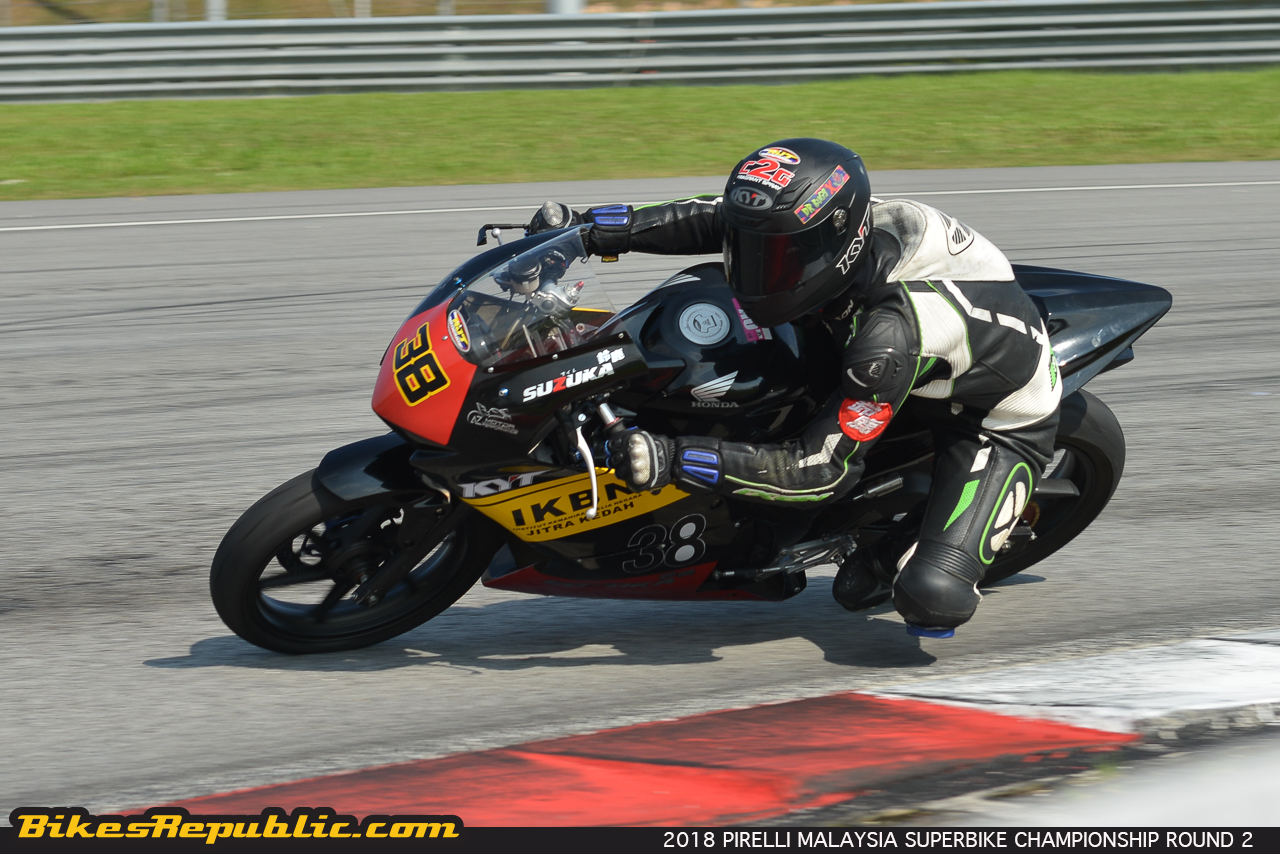 As opposed to Supersport, the Superstock class consists of 1000cc sportbikes. 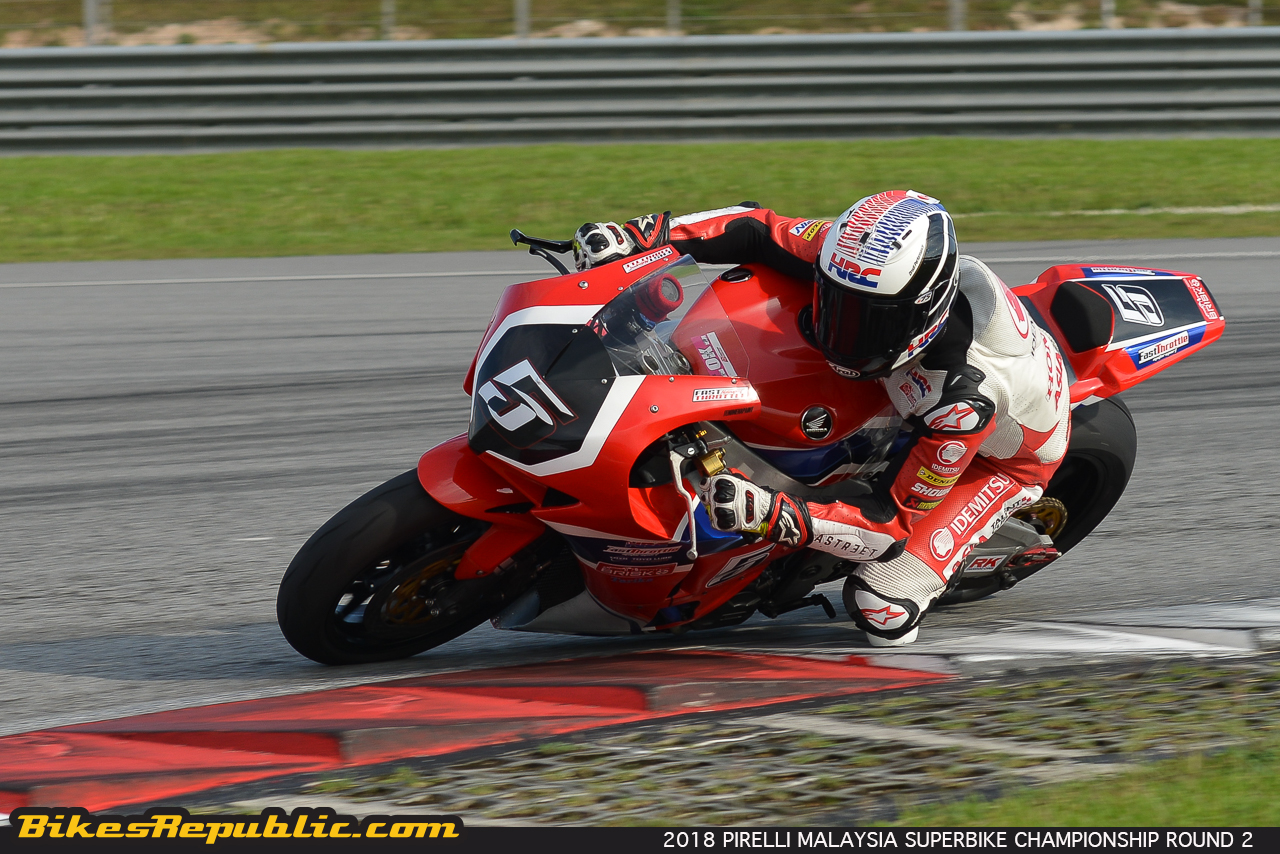 Azroy Hakeem’s (#5) aggression worked well to allow him to decimate the field of 17 riders. He crossed the line a full 30 seconds faster than Amirul Hafiq Azmi (#80) of TOC-HKM Racing Team in 2nd. 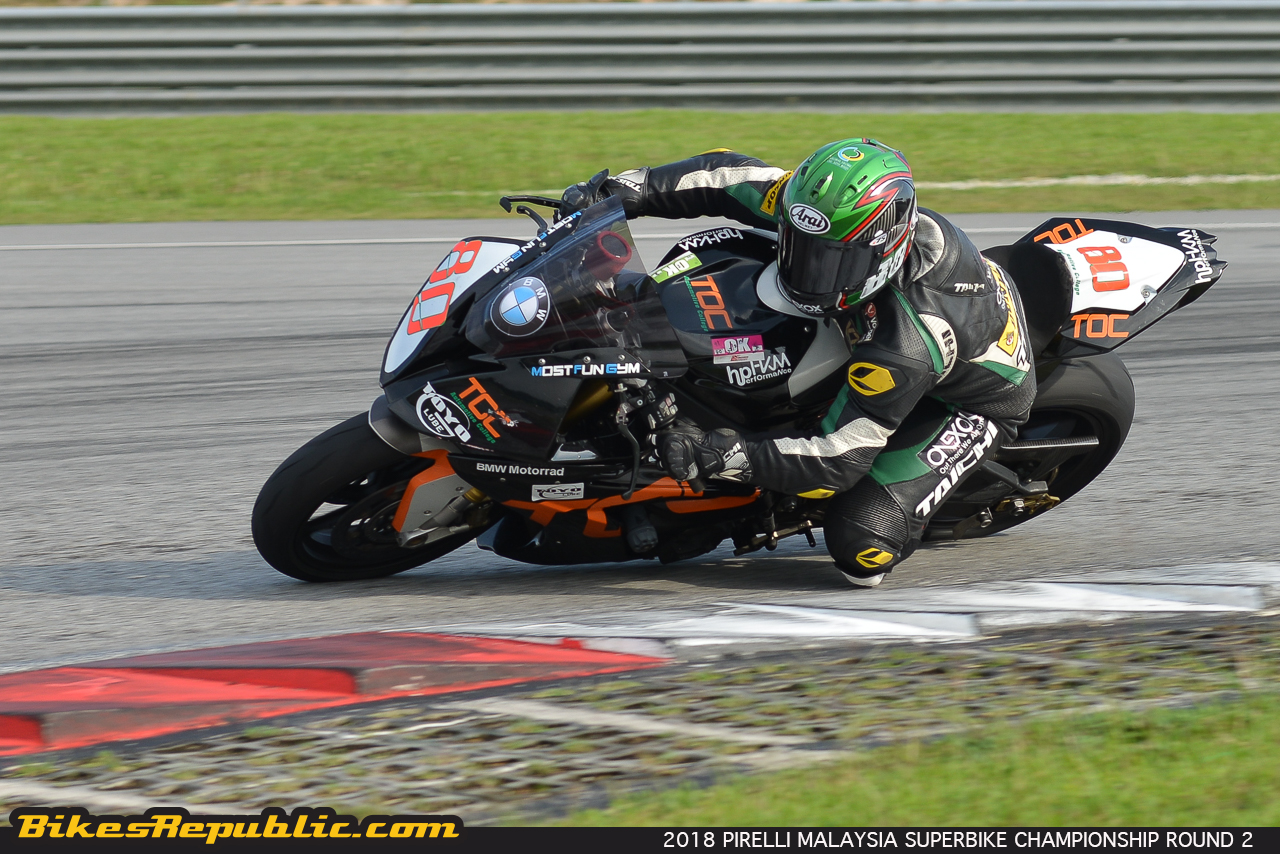 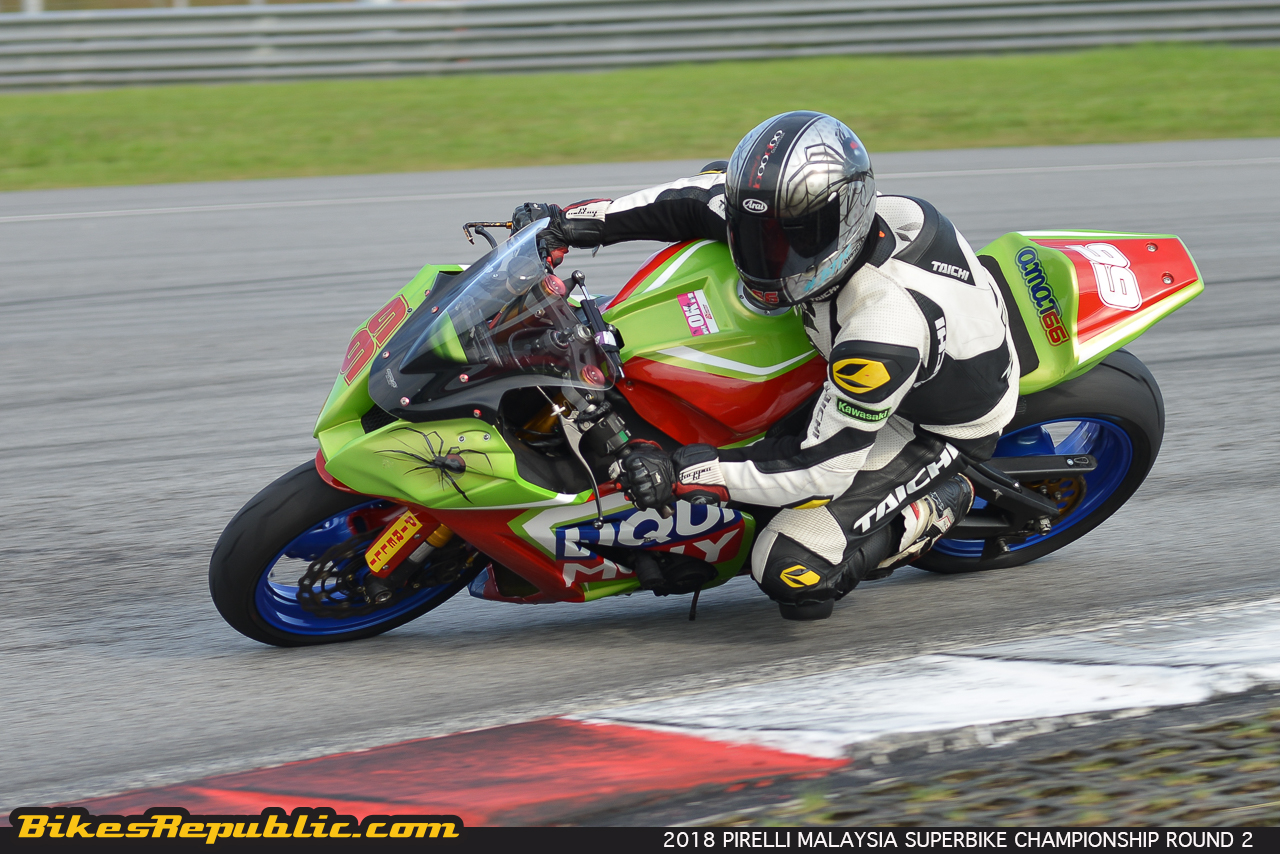 With so many races lined up throughout the day, the premier Superbike class started at 6.15pm. The weather had cooled tremendously by this point, much to the relieve of the riders and tyres.

Azlan Shah Kamaruzaman (#25) of Chia PJ Kawasaki knew he had to contend with MSBK’s ex-champion, Rajini Krishnan (#67) who hails from India. 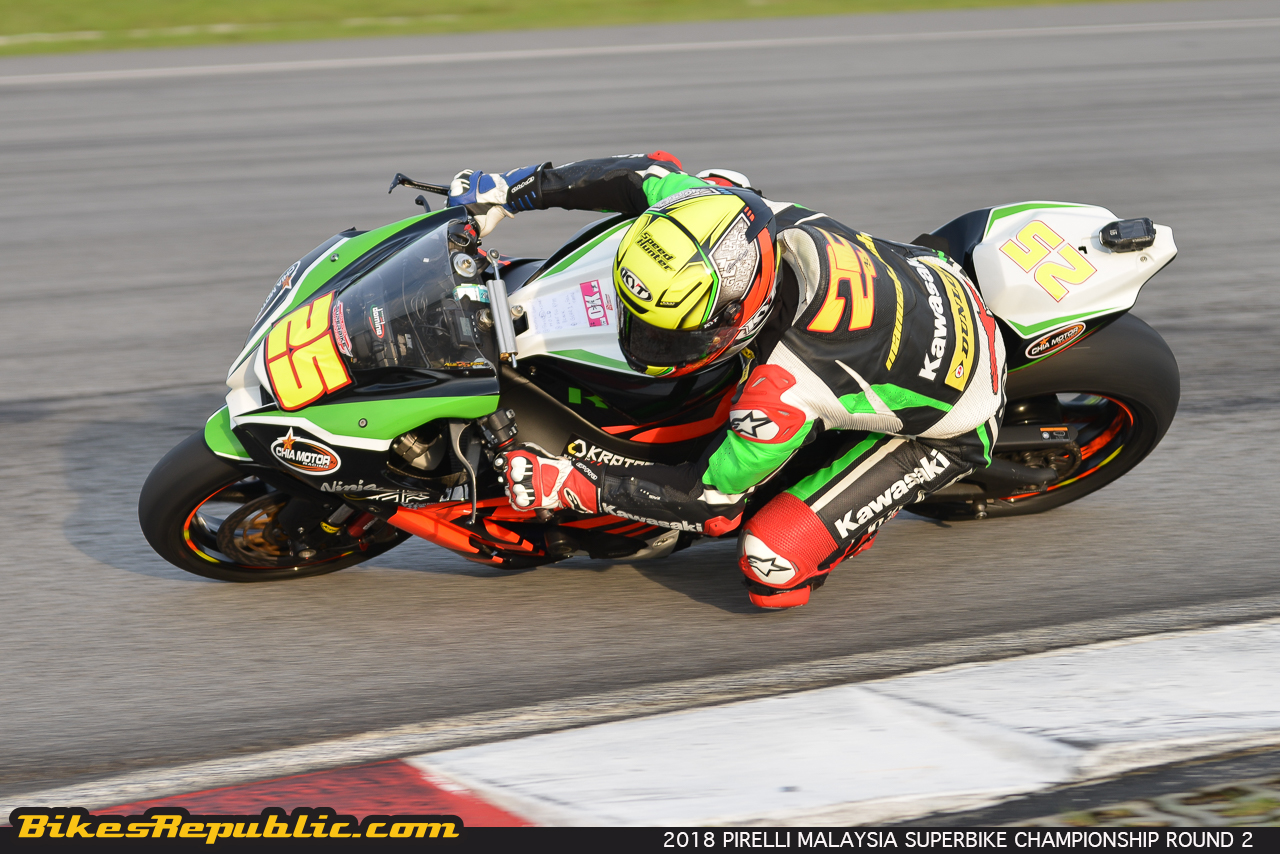 Indeed, the two rode in close formation at the head of the field from the start, with Rajini poised to capitalize on Azlan’s mistakes. Their teams and spectators held their bated breath as Rajini started to close the gap. The pass was going to happen soon. 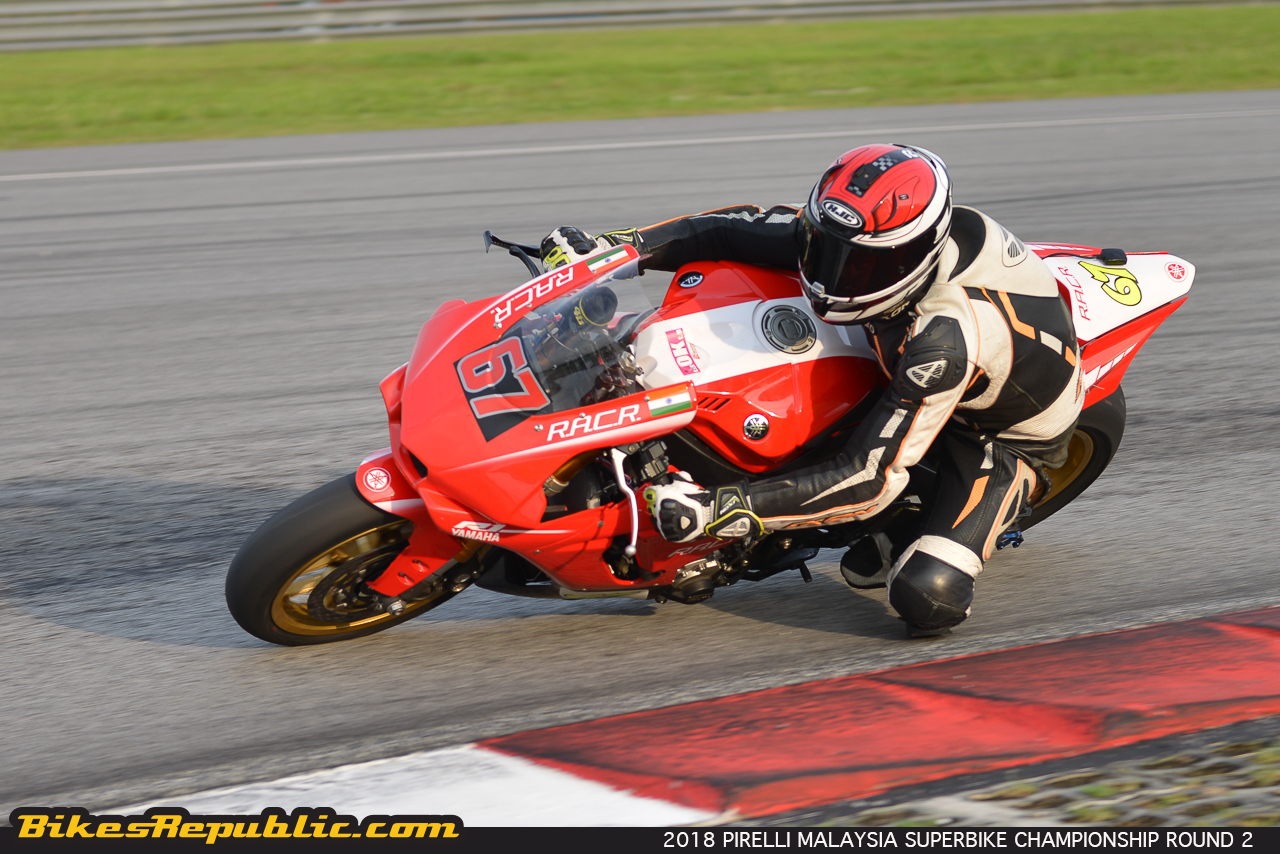 But Azlan dug deep into his experience in the Asia Road Racing series and turned on his beast mode and started attacking every corner aggressively to open up an immense lead. 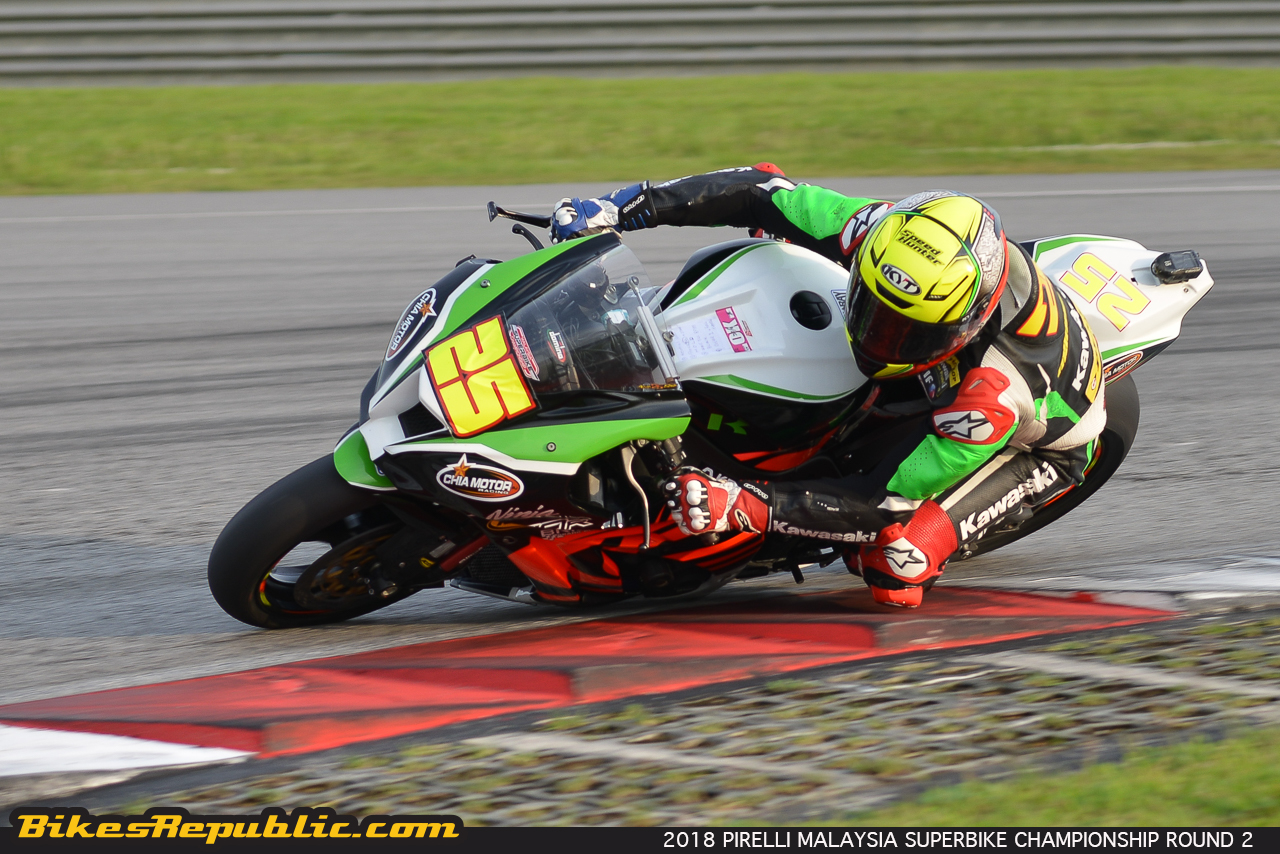 That forced Rajini to ride safe and he backed off his pace by the end of the race as he has a comfortable cushion over Jonathan Serrapica (#48) from Switzerland. 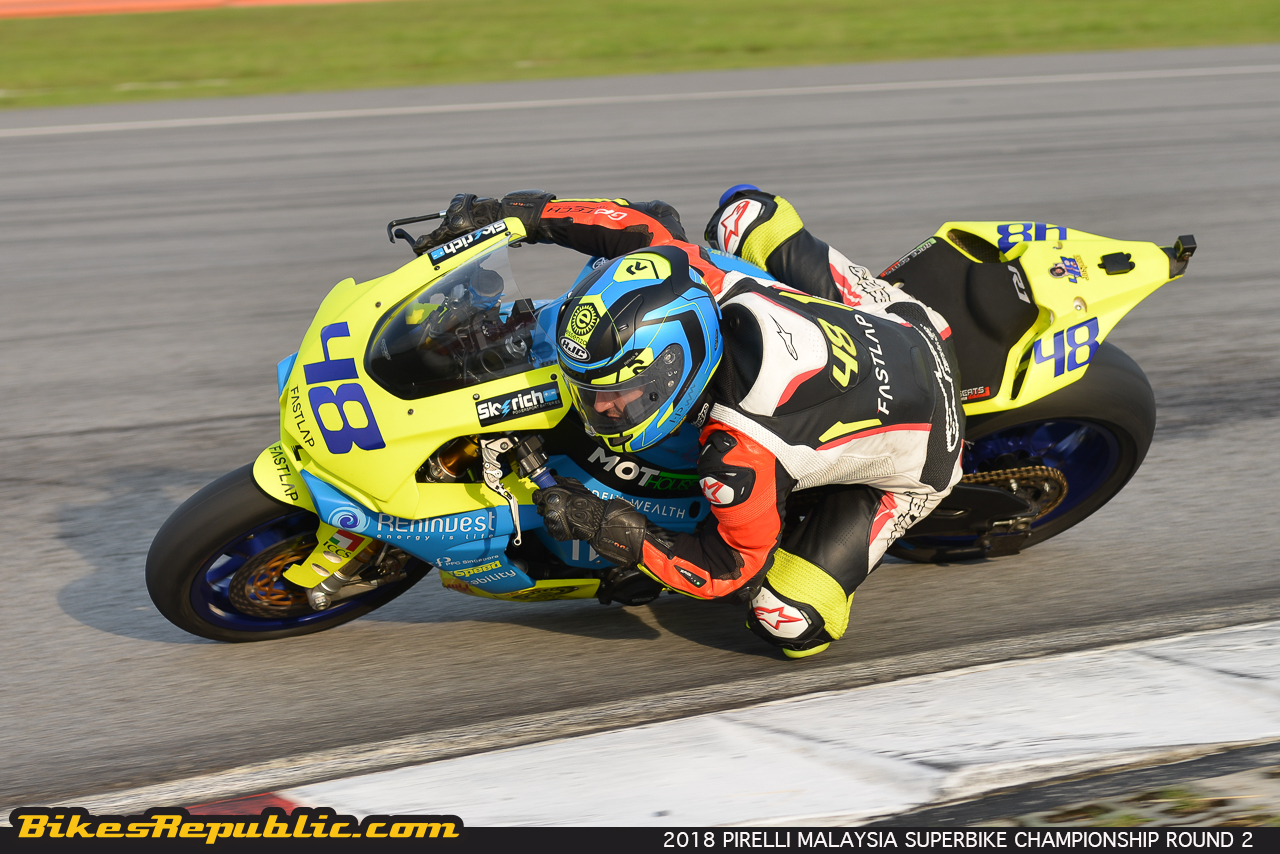 The trio completed the race in that order.

It was however, a day to forget for TOC-HKM Racing Team as both riders crashed in the race. Amirul Hafiq Azmi was holding on in 3rd when crashed heavily, destroying the bike. Fortunately, he was okay. His teammate and championship leader, Muhammad Jamalul Tarmizi (#89) was fighting for 4th place with Michael Muesel (#78) of Thailand when the former low-sided into the gravel trap. He was able to remount his bike and finished in 15th for a single point. 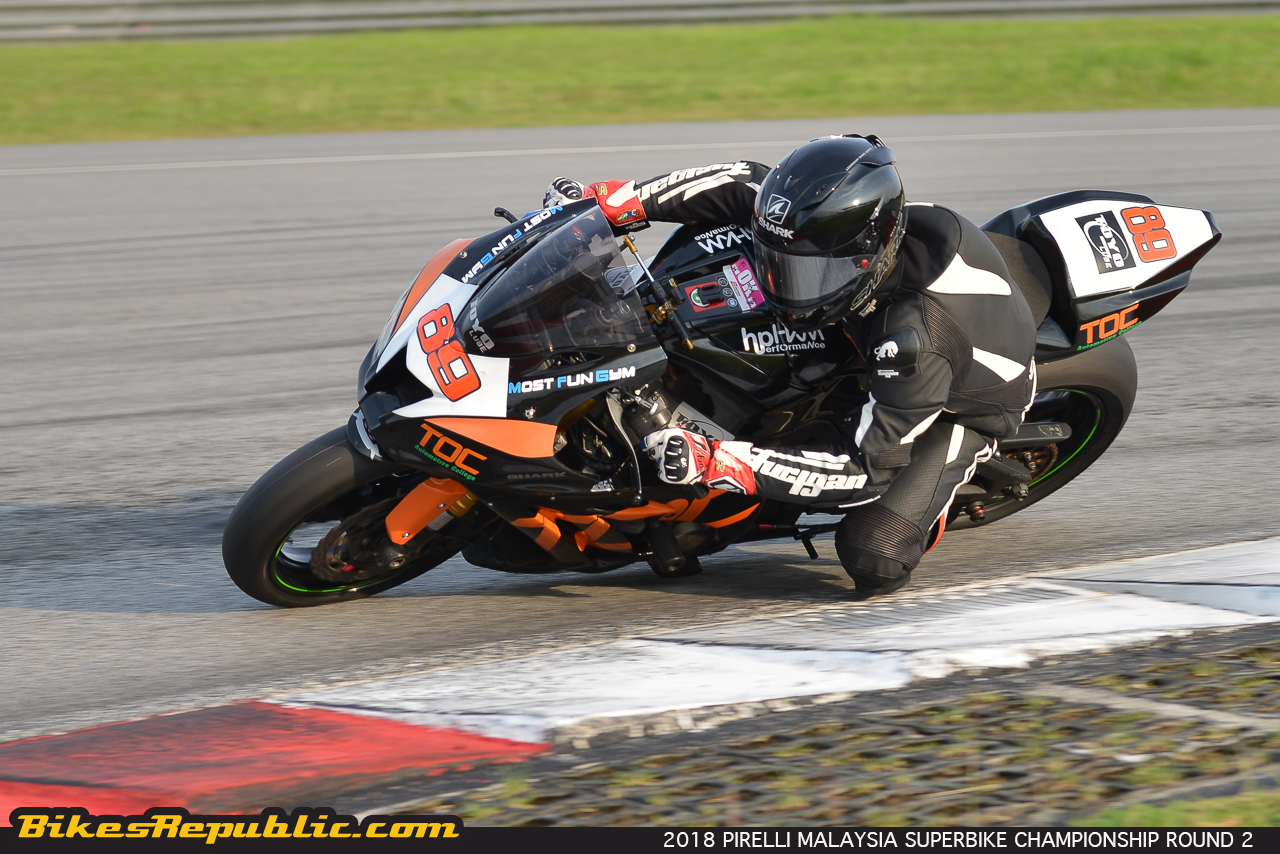