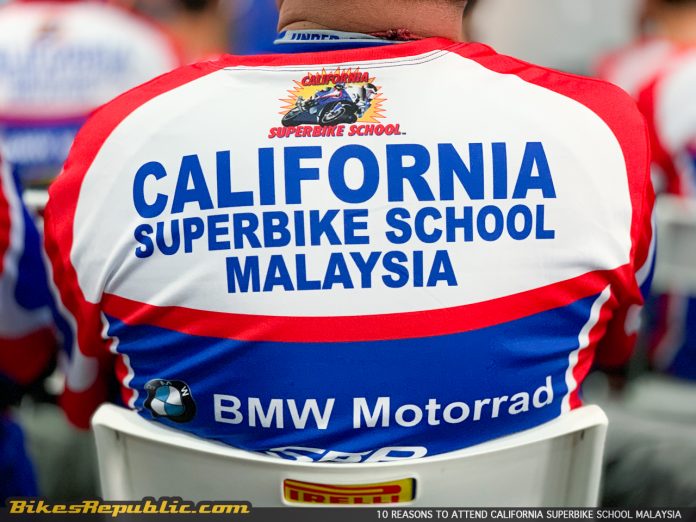 If there is one riding school that stands out head and shoulders above the rest, it is the California Superbike School (CSS). So, we decided to outline the 10 reasons you should attend as the first part of our coverage.

Founded by guru Keith Code nearly forty years ago, the school had instructed thousands of students who went on to enjoy riding even more while being safer at that. 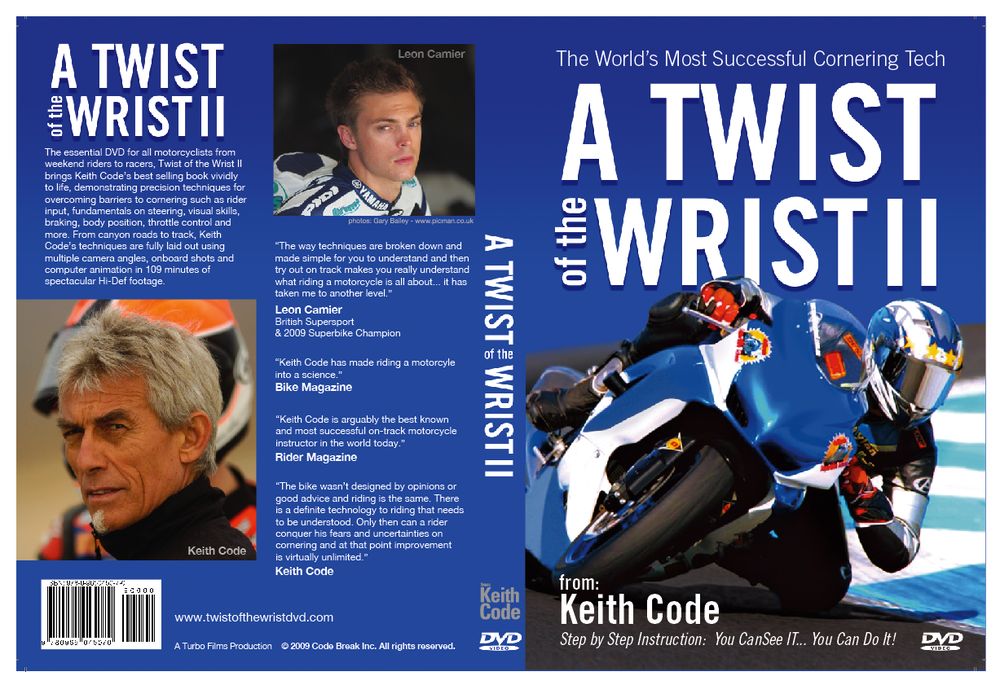 CSS then opened a branch in Australia to cater to the APAC region.

We came away more than just impressed. We were amazed at the improvements as bikers, but even more impressed at the level of professionalism put forth by both SBR and CSSMY. 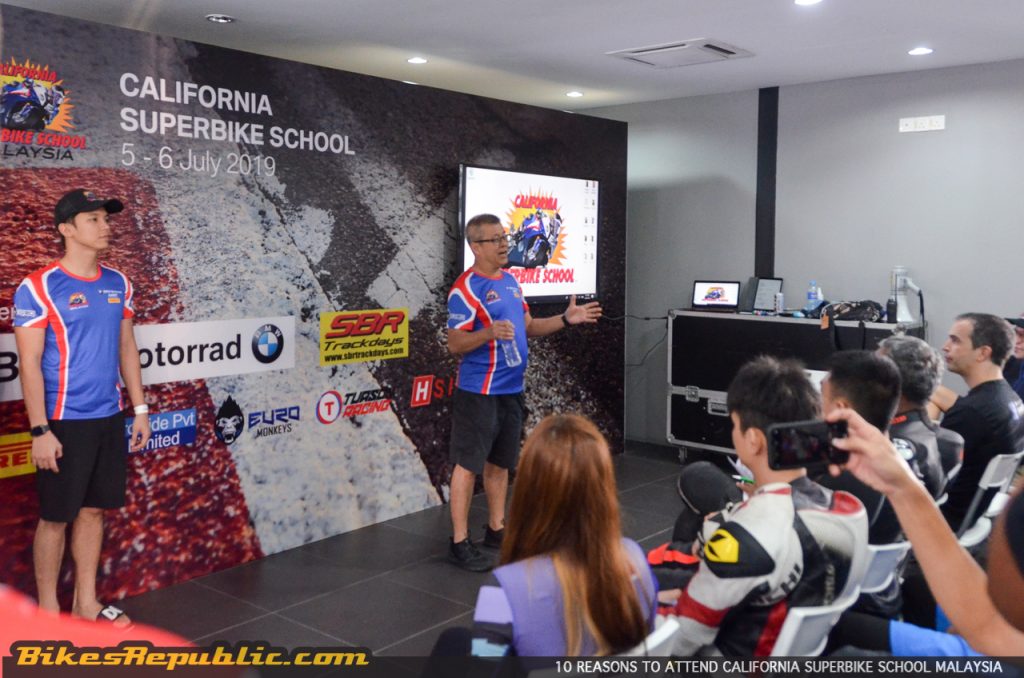 1. The Art of Cornering

Every biker lives for corners. Regardless of type of motorcycle, we lust for the twisty stuff. Additionally, it doesn’t matter if just sweeping through a corner or dragging an elbow, motorcycling is all about cornering.

Unfortunately, the act of cornering sometimes scares riders or causes crashes because riders are not armed with the right knowledge and skills. Cornering a bike is as much as about safety as it’s about enjoyment. That is why cornering is an art, as much as it is science. 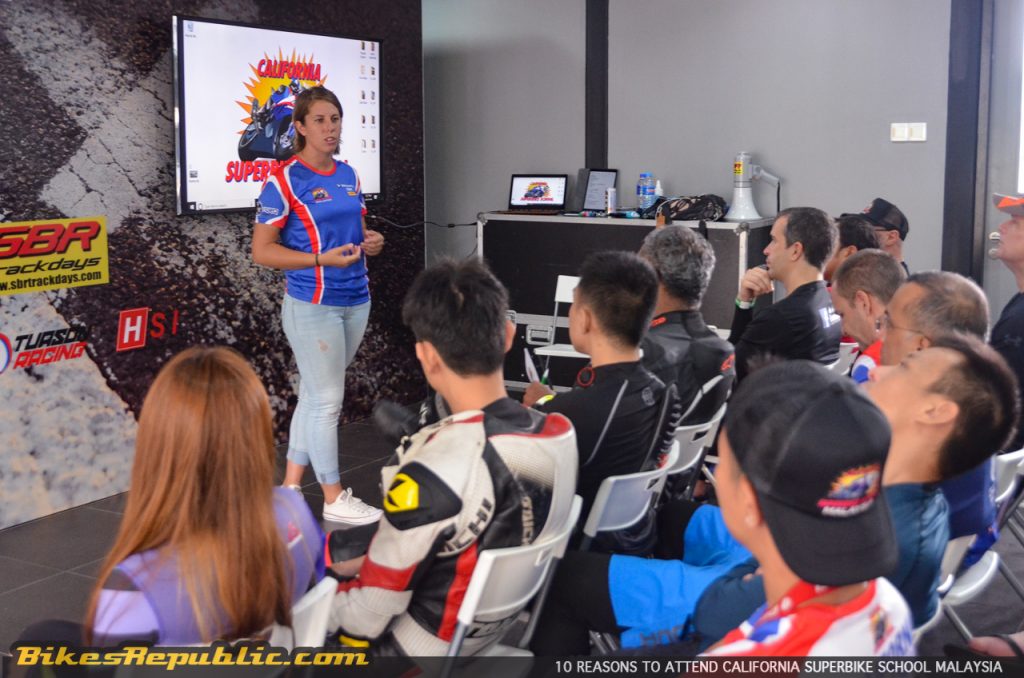 CSSMY breaks cornering down to minute details to build your skills one step at a time. Soon it becomes second nature and you don’t have to over-analyze everytime the road goes less than straight.

The CSSMY instructors never once mentioned speed or lap times. Instead, they teach you the correct basics of riding and cornering, then allow you to build your confidence and speed naturally.

In that sense, it doesn’t matter if your lap times are good enough to put you on front row of the MSBK grid, or if you’re touring around on SIC for the first time. 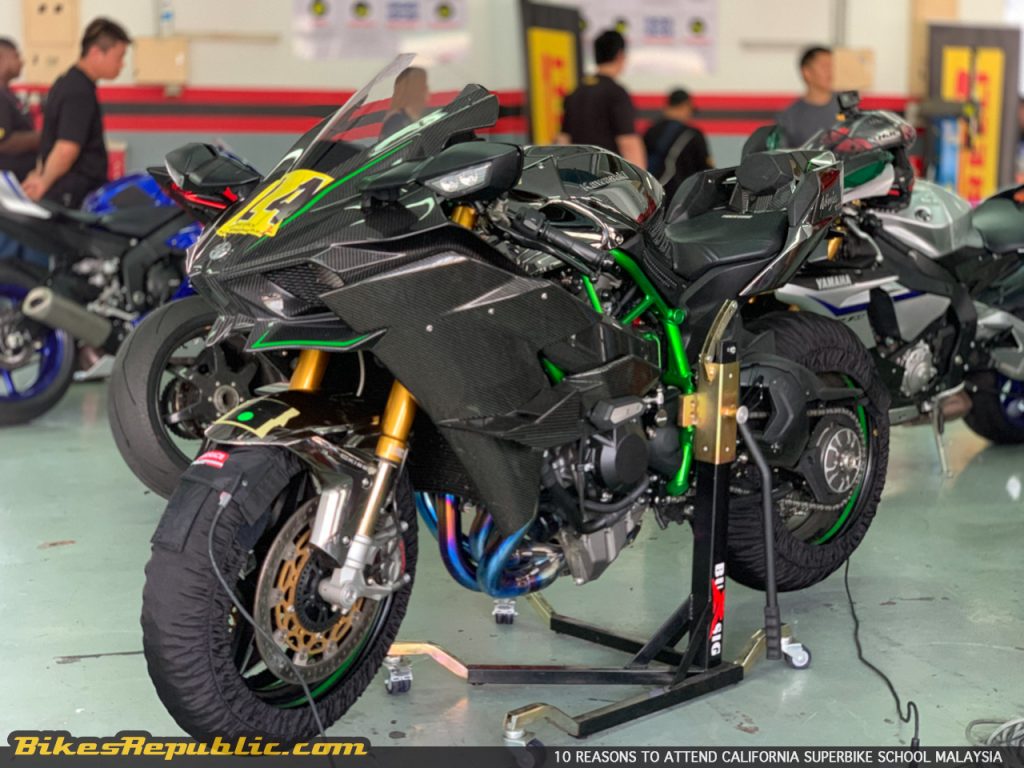 CSSMY is simply unlike other schools that tell keep pushing participants to “Open, open, open” like they’re hookers, then throwing them into the deep end of the pool. That kind of school resulted in crashes and people getting hurt (we were there!).

3. It’s not about what you ride

While 99% of the bikes during CSSMY were sportbikes, the school doesn’t restrict the type of bike you ride (with the exception of underbones and bikes under 250cc, of course).

In fact, I’ve seen pictures of participants riding cruisers in CSS USA. So, it doesn’t matter if you ride a Ducati V4 R or Yamaha Tracer 900 GT or Triumph Tiger 800 XRx or a Harley-Davidson Fat Boy.

The focus is on cornering and riding skills.

4. It’s not about your equipment

You look over and you see a bike running slick tyres, Öhlins suspension and race-spec brakes but they mean almost nothing in CSSMY. While it’s great that the rider brought a specific bike to learn on in the school, no participant feels pressured that they must have the latest and baddest techo wizardry. 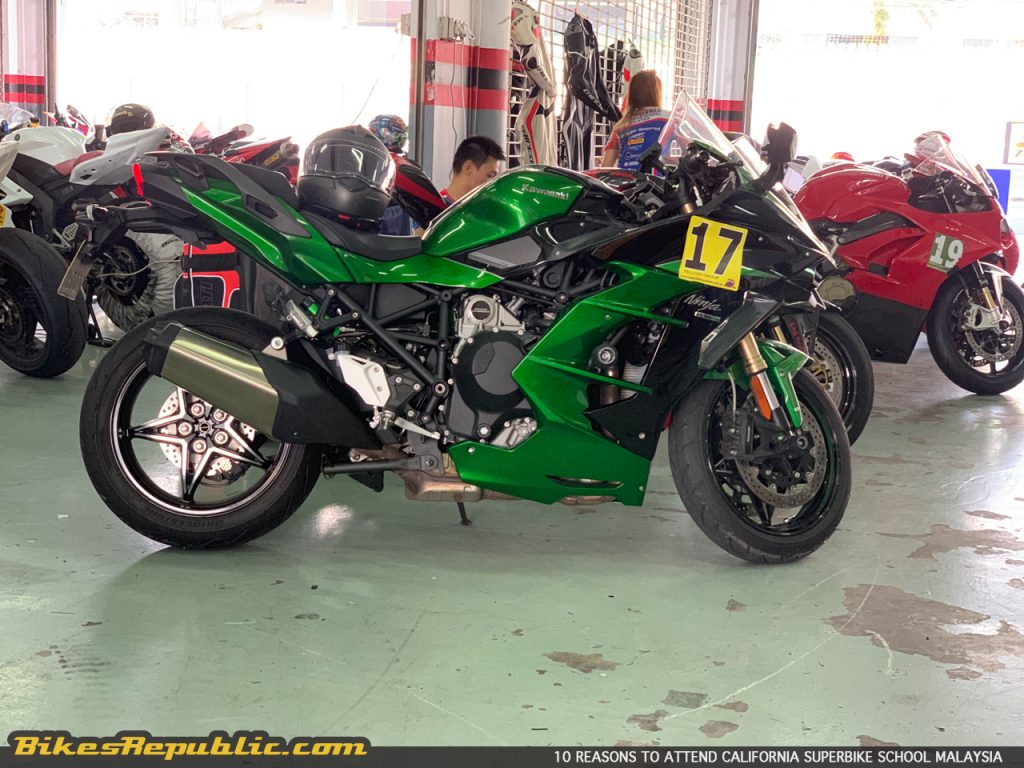 Rather than inundate students with techno babble and physics lectures, the school formulates teaching methodologies that are easy to understand and remember. Of course, students may raise technical questions and the instructors are more than happy to oblige. 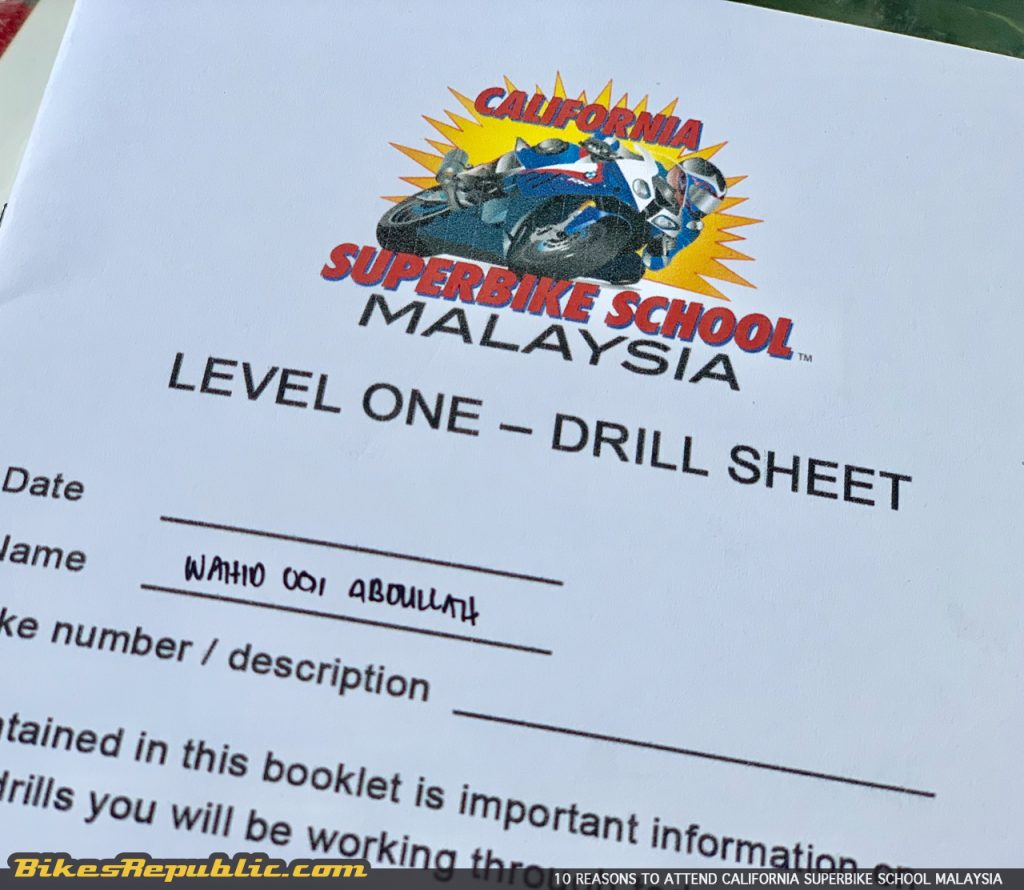 The classes started with questions from the instructor, followed by answers from the students and they were discussed. The discussions were laid back with plenty of fun and laughs.

Out on the track, an instructor will ride ahead of us and use pre-determined hand signals to remind us of the specific drill.

Back in the pits, we’d sit down with the on-track instructor and work through what we learned in the classroom and track session. He would suggest corrective measures in the next session.

Only three students are assigned to each on-track instructor. That way, the instructors can pay more attention to each student. 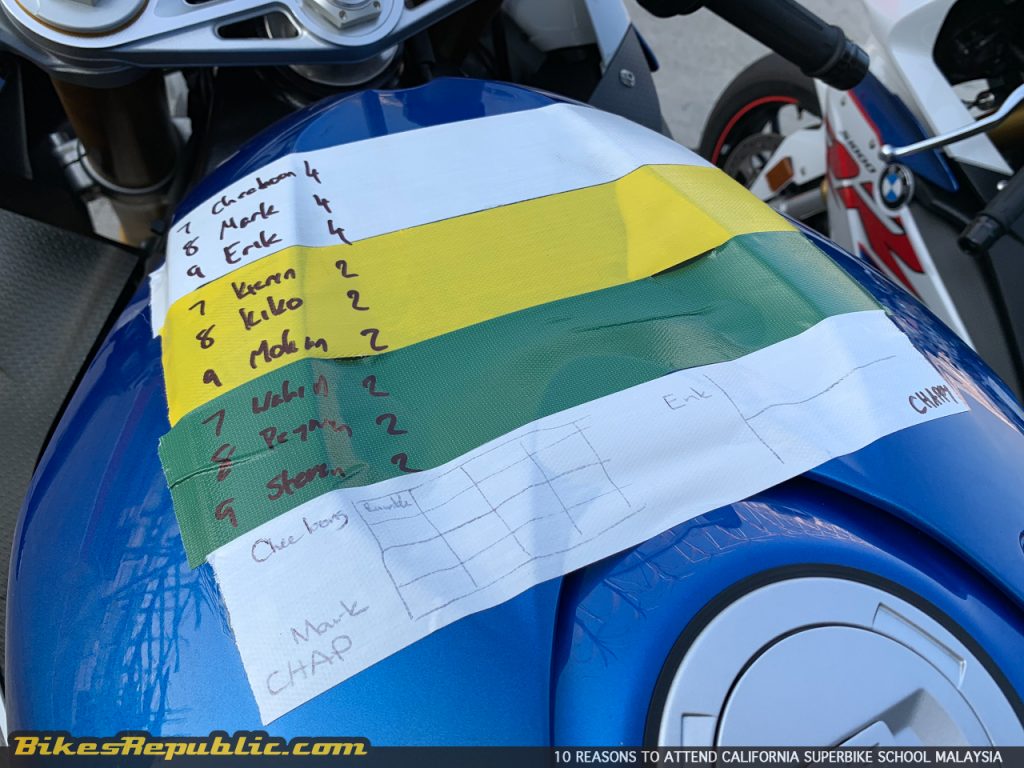 The instructors do not berate the students for their mistakes, instead it’s always about positive reinforcement. A student may have totally cooked the entire session, but the instructors were always there to suggest ways to improve. 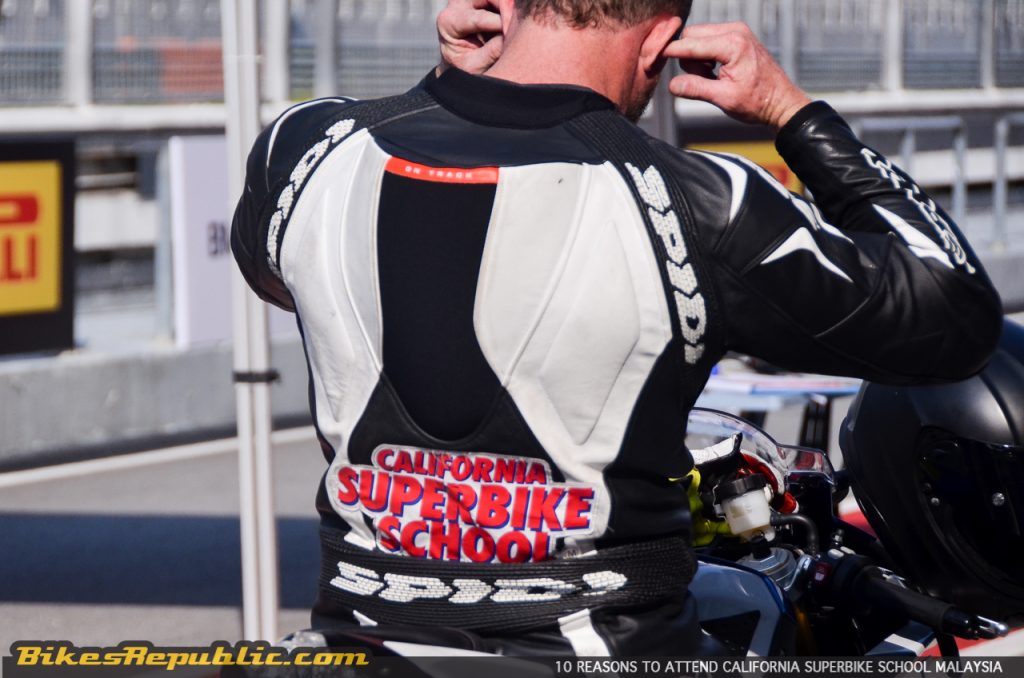 Would you prefer to hear, “Why didn’t you open?! You must open!!!” or “Don’t worry about it, follow me in the next session and see what I do”?

8. All instructors ride the same way

We noticed that all the instructors ride almost exactly alike, in terms of how the steered their bikes, body positioning, head positioning, cornering lines, braking, reference points, etc. 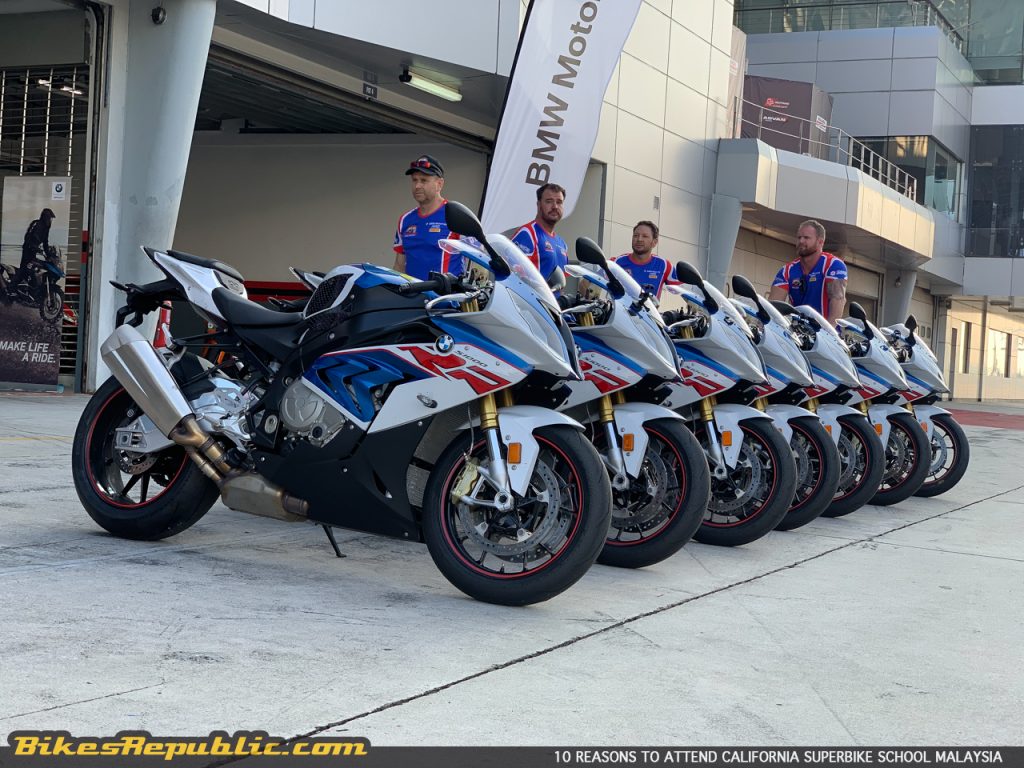 This was not only an awesome sight but it’s fair to the students. It means that a student attached to one instructor isn’t getting less or more from another. Instead, they learn what was taught to the letter.

9. Skills can be applied anywhere

Conducting the courses at the racetrack provides the safest environment. The skills taught in CSSMY can be applied any time you ride because they cover the fundamentals of steering, throttle control, vision, braking, body positioning, etc.

10. Improvements that are measurable

All of us started the course with some level of uncertainty, self-doubt, fear. Some didn’t know what to expect. Some just wanted to survive. 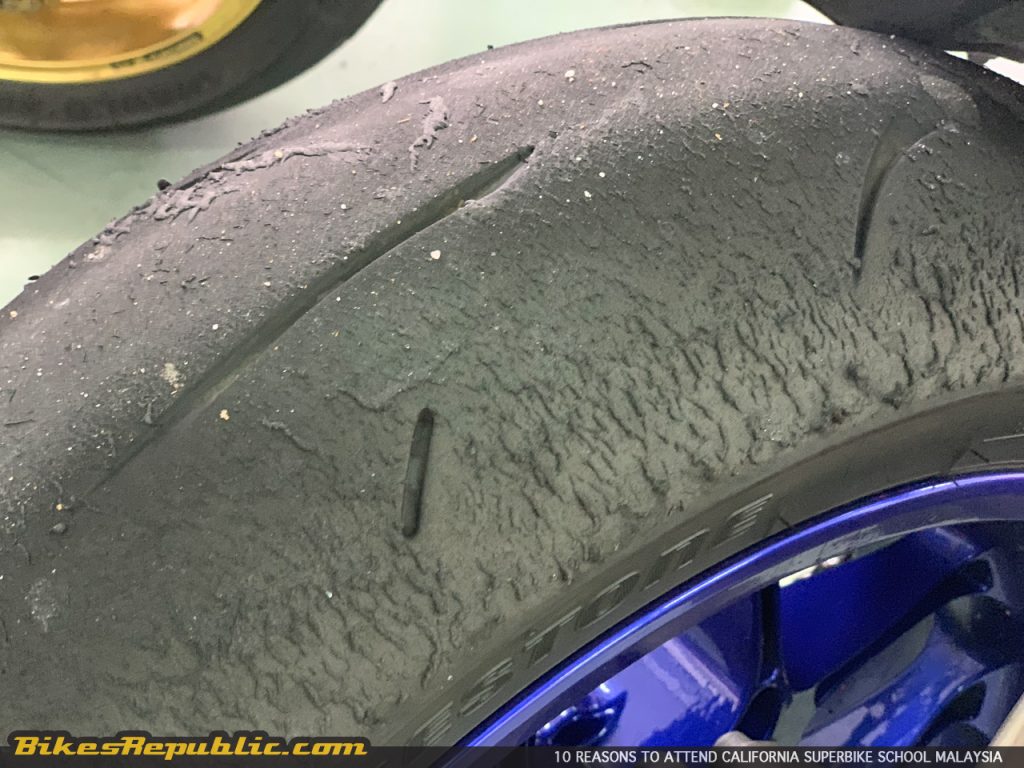 But it was easy to see that everyone had improved and were genuinely relaxed by the middle of the second day. The riders who had struggled every lap were now riding at steady paces. Those who feared corners leaned over further. And those hotshots went even faster but looked more natural than all contorted on their bikes.

That’s because CSSMY had accepted our fears and shortcomings and took positive steps in overcoming them in an objective-based method.

The California Superbike School Malaysia has to be attended by every biker. We owe it to ourselves, our riding buddies and the community at large that we upgrade our riding skills. You will find riding is so much more pleasant and safer, in addition to going home feeling that you’ve achieved the best thing in your life.

CSS Malaysia will be back next year so start saving!