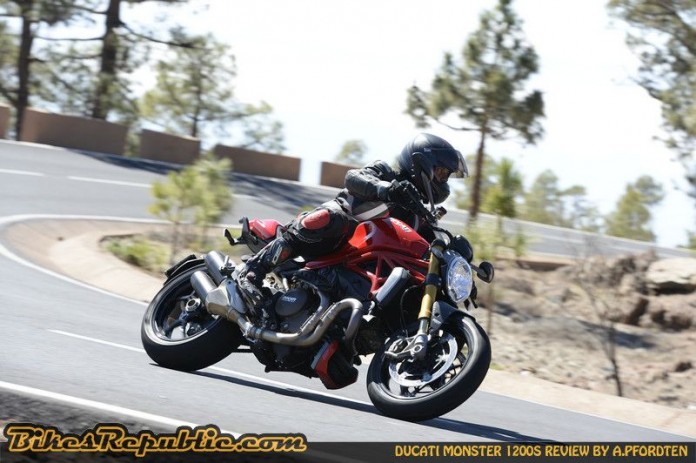 There was no denying that the island of Tenerife was the perfect location to launch the new Ducati Monster 1200. The Spanish Island, located in the middle of the Atlantic Ocean is known for it’s stark beauty. Formed after the eruption of a volcano millions of years ago, the highest point – Mount Teide is visible as a snow capped mountain peak. Beautiful, undulating strips of dark tarmac lead up from the coast to the national park located up in the mountains.

It was this route that would be our testing ground for Ducati’s latest iteration of it’s best selling Monster. 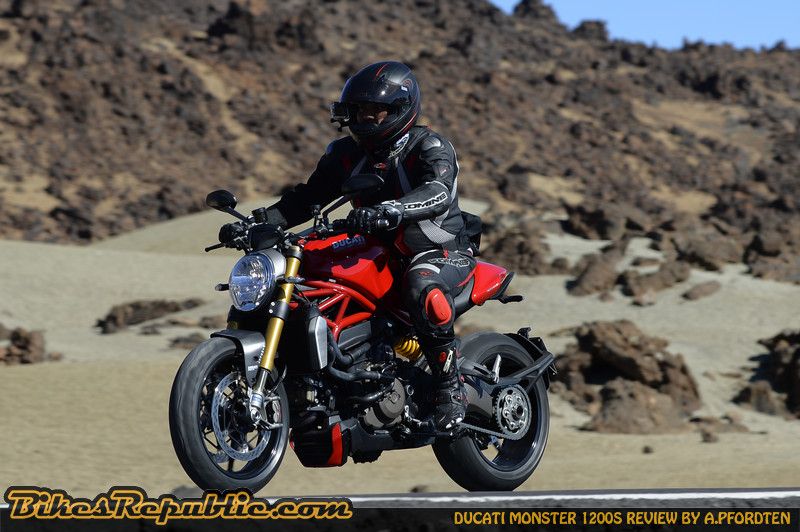 First off, the 2014 Ducati Monster has grown in size and weight. It is a bigger Monster than the previous version. Which is good, really. At the rate the major bike manufacturers are decreasing the size of their models – it won’t be long before only midgets can ride their bikes. The handlebars of the new 1200 are now higher in position, and the seating position more stretched out. 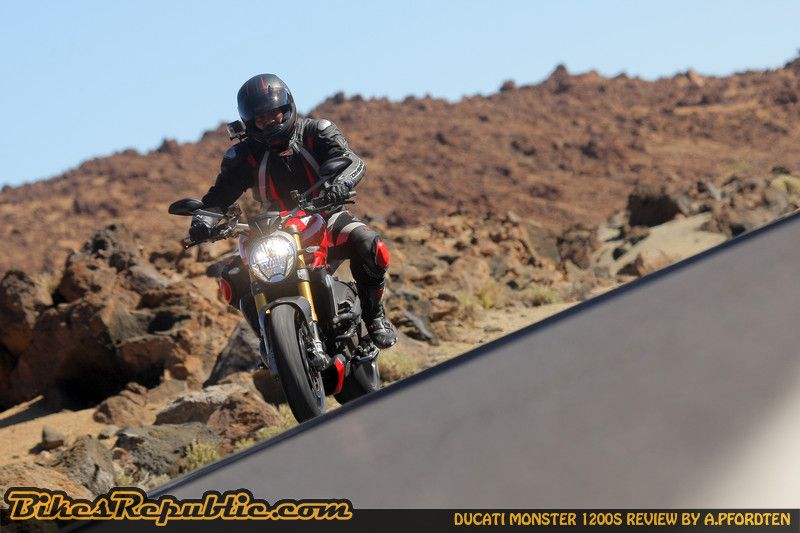 This was apparent from the moment we left Vincci where we were staying on the coast. Riding up the highway into the mountains, the Monster S could obviously accelerate very strongly, even in Touring mode. The Testastretta mill churns out max power at just 8,750 rpm and the max torque of about 125 NM is available at 7250 rpm. 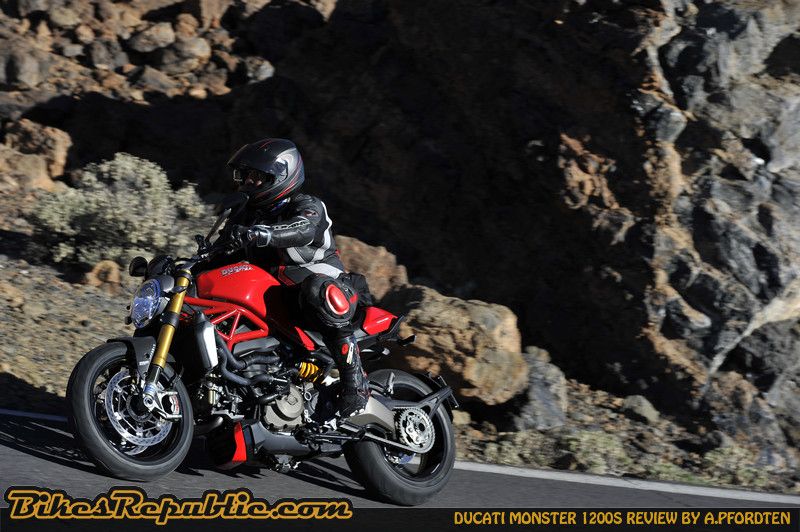 The engine has three mapping modes – Urban mode limits the engine to 100 hp, with smooth ride by wire settings that make the bike easy to handle in traffic around town. Sports and Touring modes unleash the full fury of the beast – but the latter gives a less aggressive mapping which makes the bike easier to ride. Sports mode is of course the most aggressive – giving abrupt, arm jerking acceleration. It is worth noting that for most of the ride, I found Touring mode more than sufficient.

A fascinating feature of the new 1200 is the use of a full color TFT display in lieu of traditional instrument panels – just like the Panigale. 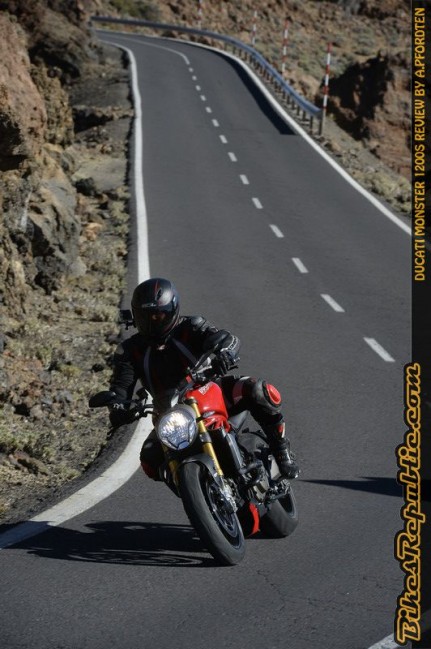 The display transforms entirely when shuttling between the various modes. In urban mode for example, the RPM meter mysteriously disappears – leaving an uncluttered meter face with a giant clock above, and and even bigger speedometer to keep you obeying the speed limit. In touring mode – the clock is reduced in size and relocated to the bottom left – and an RPM bar appears across the face of the meter. The TFT meter is a fascinating and practical innovation.

Riding off the highway and into the winding roads leading up to the mountains, it was immediately apparent that despite an increase in weight – the new Monster was still very agile.

Frame dynamics have been tremendously improved – as had been detailed by project manager, Giulio Malagoli in a presentation earlier. The engine is now a stressed part of the frame – with the steel trellis frame attached to the cylinder heads. This resulted in an amazing 99 per cent increase in torsional stiffness as opposed to the Monster 1100 EVO. Interestingly, 1.23 kg of weight was also shaved in the exercise as well. 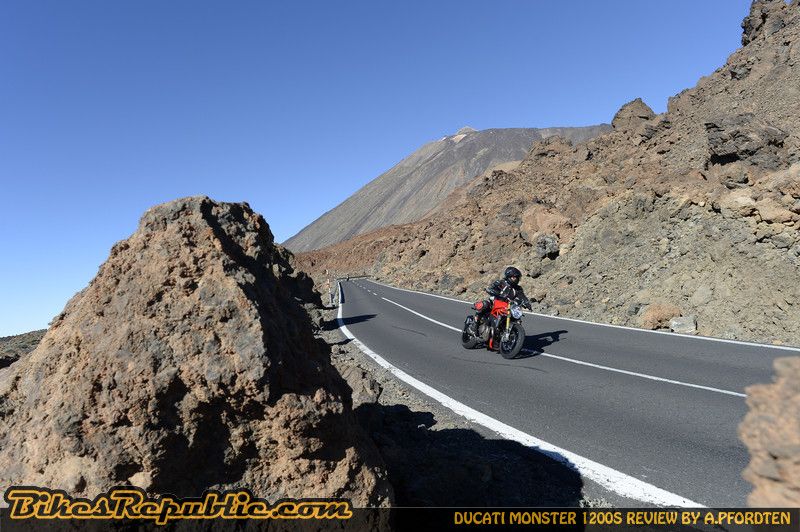 Towards the rear of the bike, a Sachs adjustable shock absorber and a cast aluminum swingarm also attaches to the engine.

As the roads opened up, I found myself following a pack of very fast international motoring journalists as they made their way through the sparse traffic travelling in the national park. It doesn’t help that I only had a day to acclimatise from riding on the left lane in Malaysia – to riding ‘on the wrong side of the road” in Spain.

While the Monster is fast, it felt safe. On the S version – the bike was equipped with fully adjustable Ohlins forks with 48mm sliders. Massive Brembo M50 calipers, in Malagoli’s own words “The best available” cut down the tremendous speeds that are easily attained on the Monster. With 330mm front discs and a Radial (16mm) front master cylinder – it is the exact same front brake system found on the 1199 Panigale. 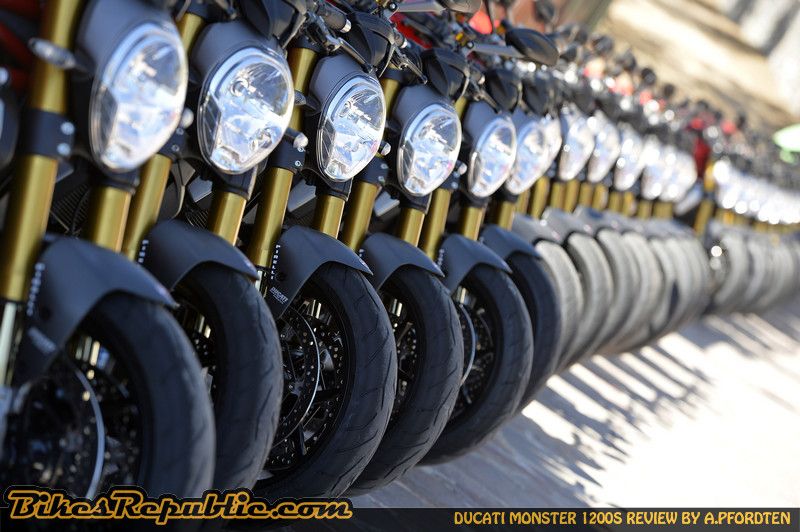 The bike is also quite a looker. Available in traditional Ducati Red and a new, striking color known as Star White – the bikes demand attention at every single stop we made – even vying for attention with the magnificient Mount Teide in the background. The design resonates the Monster cues of the past – but due to the increase in size – the bike has a more commanding and stronger presence when parked on the kerb.

Whenever we parked the bike during the ride, legions of tourists would click away with their cameras. 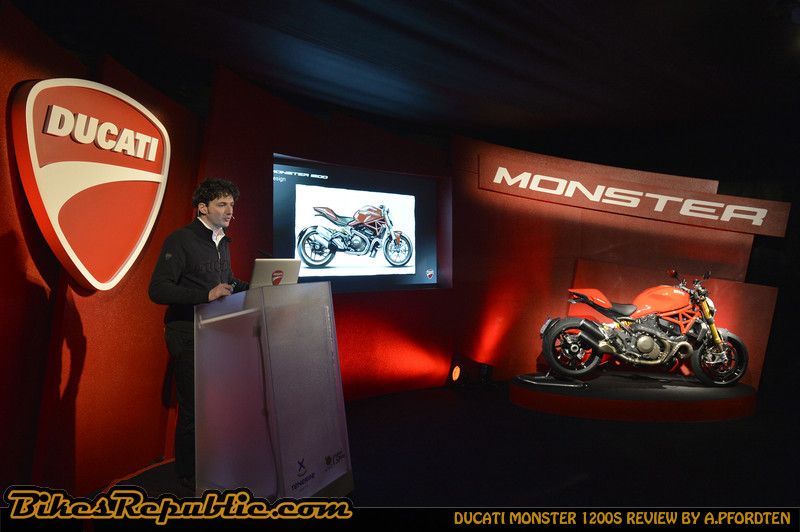 The size upscale – which stretches the wheelbase from 57 to a lengthy 59.5 inches, also increase seat width. Bigger riders will look less silly when perched on top of the bike in their tight racing suits. More importantly – the comfort created from the extra space means you can ride longer and further than before in more comfort.

According to Ducati, up to date, 270,000 Monsters have been sold worldwide – making it Ducati’s best selling model by far.

The Monster brand has been refined significantly over the years. It is now aimed squarely at 40-45 year olds urbanites with the ‘soul of a rebel’. 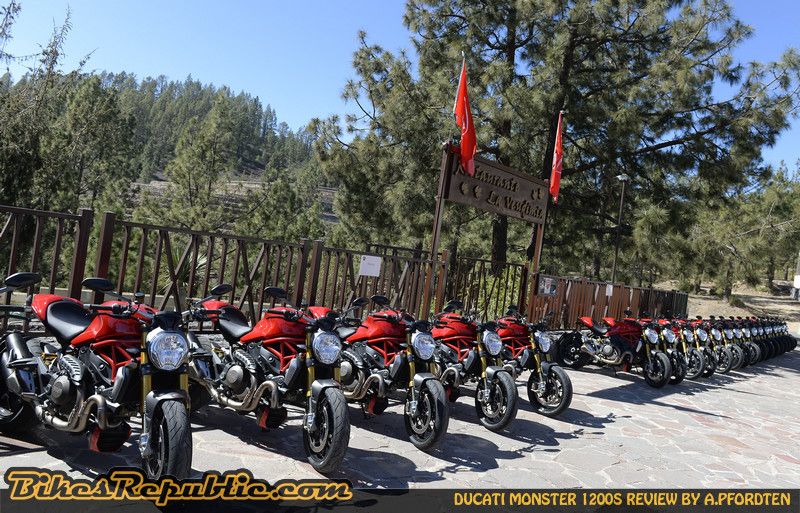 From the get go, it was clear that Ducati had set clear goals when designing the latest bike. It would be more usable, at the same time provide better performance than the previous generation bike.

It seems like this Monster pretty much hits the mark. The Monster is scheduled to hit Malaysian shores in June. Watch this space in the future for launch and pricing details.