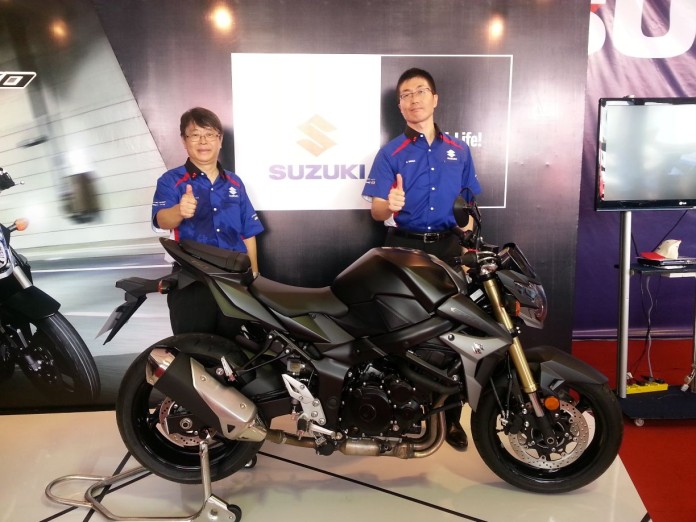 In the midst of all the commotion going on at the Sepang International Circuit (SIC), Suzuki Assemblers Malaysia Sdn Bhd (SAM) took the opportunity to officially launch the Suzuki GSR750.

Also known in other parts of the planet as the GSX-S750, the GSR750 is one of the more popular models by Suzuki worldwide, the naked bike is powered by a four-stroke, four-cylinder, liquid-cooled, fuel-injected DOHC engine with a displacement of 749cc derived from the GSX-R750 sports bike.

The GSR750 comes at RM53,888.00 with a choice of Pearl Glacier White and Metallic Matt Black colour.

And the good news doesn’t stop there, since their launch of four models earlier this year, the Hayabusa, the GSX1250FA, the GSX-R1000 ABS and the V-STROM 1000 ABS and now the GSR750, Suzuki Assemblers Malaysia Sdn Bhd will also add five new models in 2015.

“We will also continue to expand the number of big bike dealers throughout the country to serve you better,” said Toru Kobayashi, Managing Director of Suzuki Assemblers Malaysia Sdn Bhd.

He added that they will also have service centers at the three major locations of Penang, Shah Alam and Johor Bahru.

“To make the owning experience of a Suzuki Big Bike even more pleasurable, we will have various Suzuki genuine accessories available for these Suzuki big bikes so that you may customise your bike to you liking and satisfaction.”