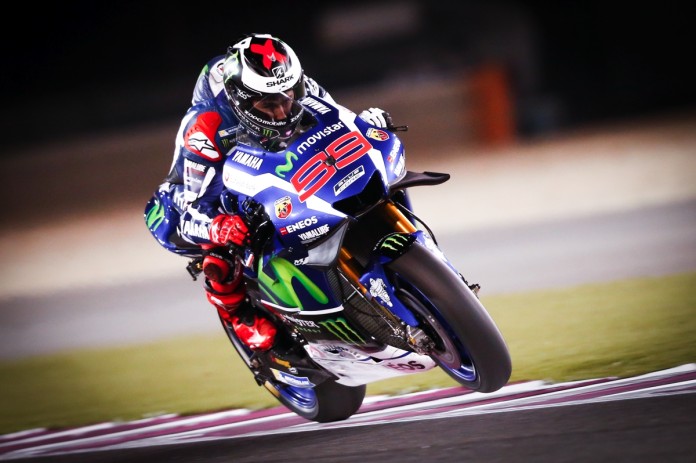 The final three-day pre-season tests for the premier MotoGP class came to close recently in Qatar just before the weekend.

Seasoned readers would havew already known by now that reigning world champion Jorge Lorenzo ended the first day on top whilst the bulk of the Honda-powered machines continued to struggle against the Yamaha and Ducati machineries. Here’s what went down in the following two day. (Read our report of Day 1 here)

DAY 2
Spurring a huge surprise on the second day of testing was the performance of youngster Maverick Viñales astride the Team Suzuki Ecstar GSX-RR. 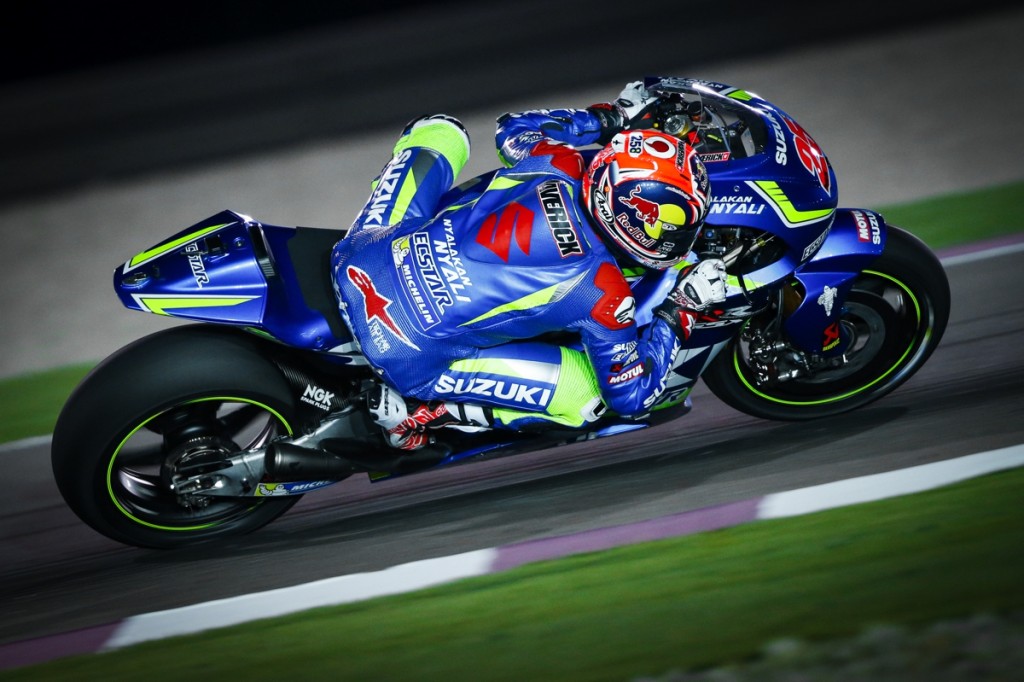 Whilst Movistar Yamaha Factory Racing’s Valentino Rossi held the top spot of the time sheet for most parts of the day, it did not take Viñales long as he thundered across the Losail International Circuit to set the day’s best time. 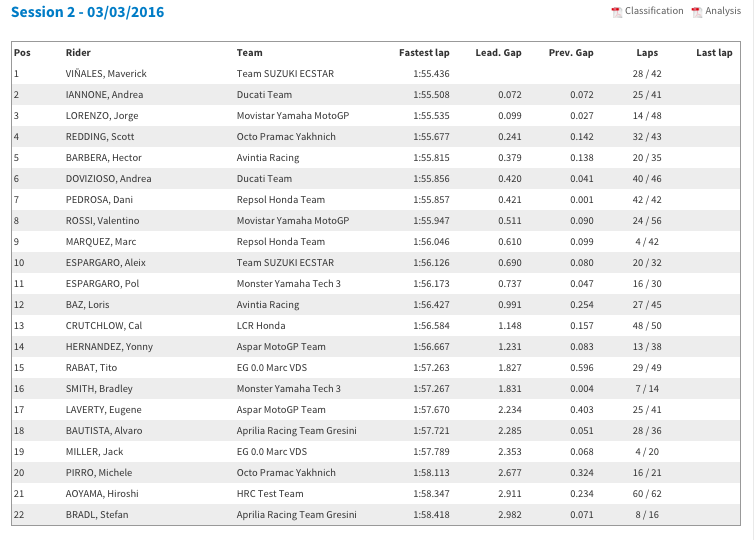 Having set his best time of 1:55.436, Viñales once again proved that the Suzuki GSX-RR machine does have what it takes to go against the dominating factory Yamaha and Ducati machineries. Speaking of the latter, Andrea Iannone astride the factory Ducati bike ranked as the day’s second fastest with his best time of 1:55.508 astride the new Ducati Desmo 16 GP – merely 0.072 seconds off of Viñales’ blistering pace. 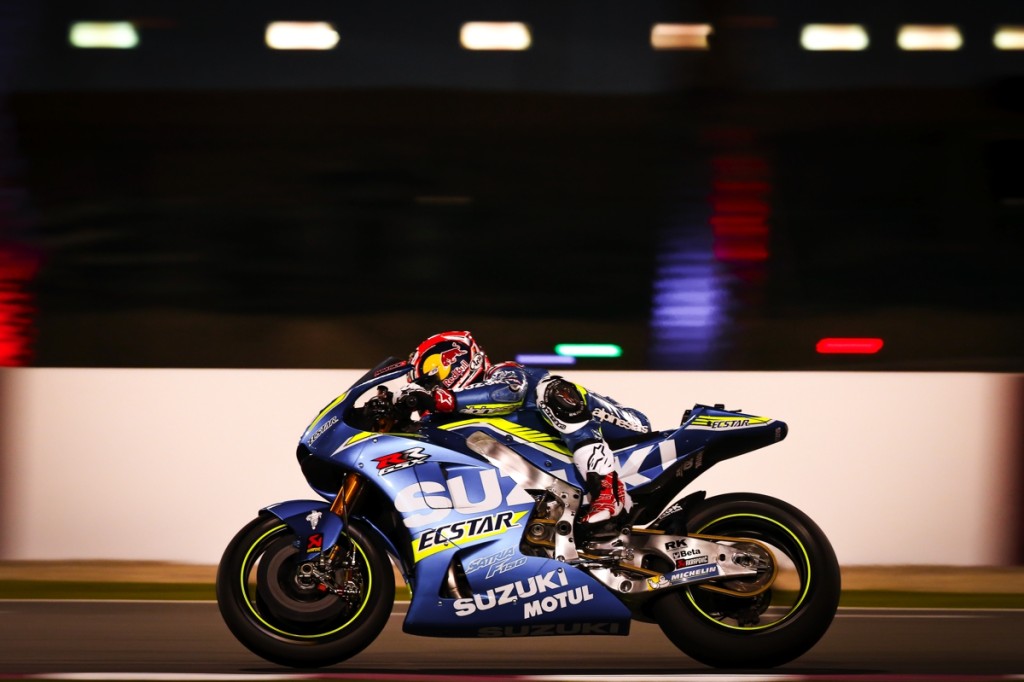 Despite the surprising performances of the factory Suzuki and factory Ducati machines, reigning world champion Jorge Lorenzo wasn’t far off. The Spaniard astride the factory Yamaha YZR-M1 ended Day 2 as the third fastest rider in the time sheet with his best time of 1:55.535 – just 0.099 seconds slower than Viñales’ best. 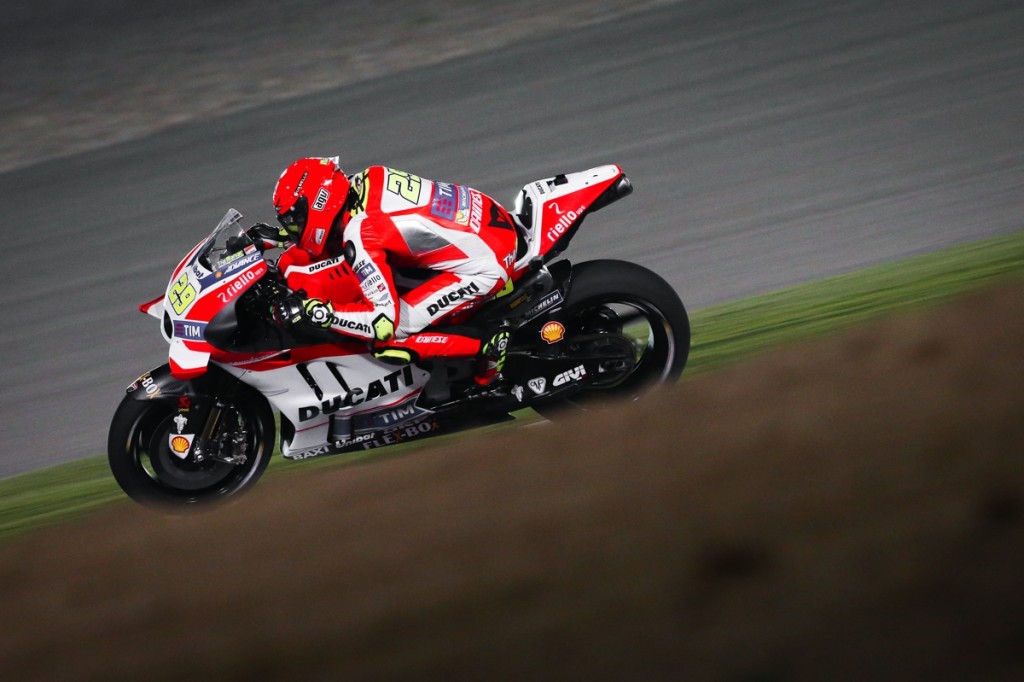 Like Day 1, the top 10 times were mostly logged in by a large mix of factory and satellite Ducati machines with Iannone leading the pack on the factory bike, followed by Octo Pramac Yakhnich’s Scott Redding standing as the fastest satelliter Ducati after ranking fourth fastest. 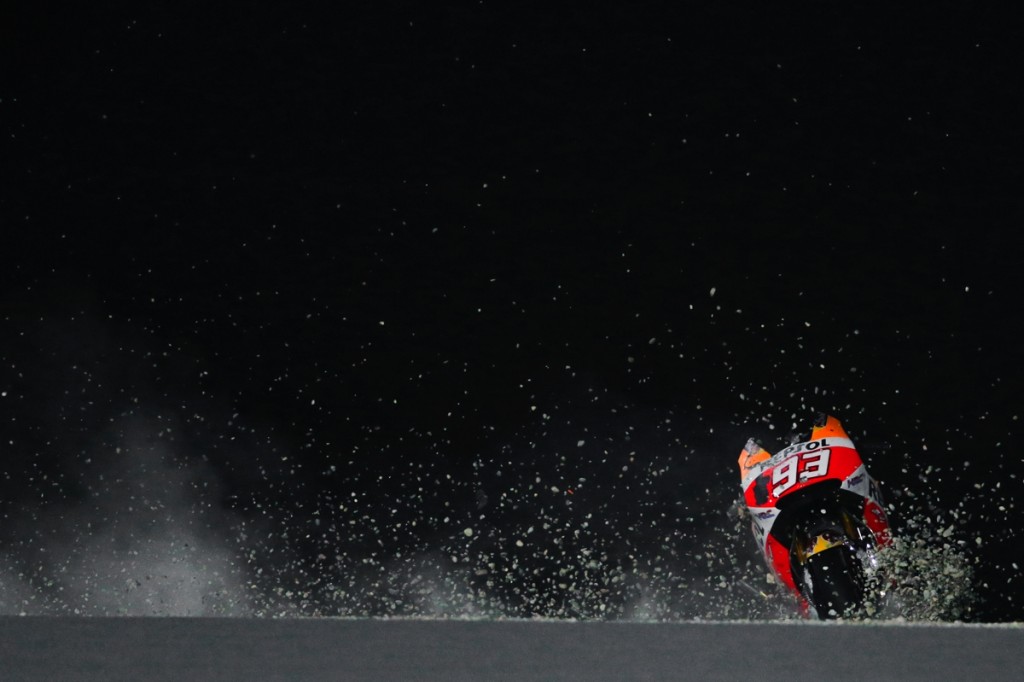 Again, the two factory-spec Repsol Honda RC213V machines show clear signs of struggle yet again against the factory Ducati, Yamaha and Suzuki machines. Dani Pedrosa stood as the fastest Honda-powered rider and machine on Day 2 after being ranked as seventh fastest whilst teammate and former world champion Marc Marquez ranked himself ninth fastest despite suffering a dramatic crash. 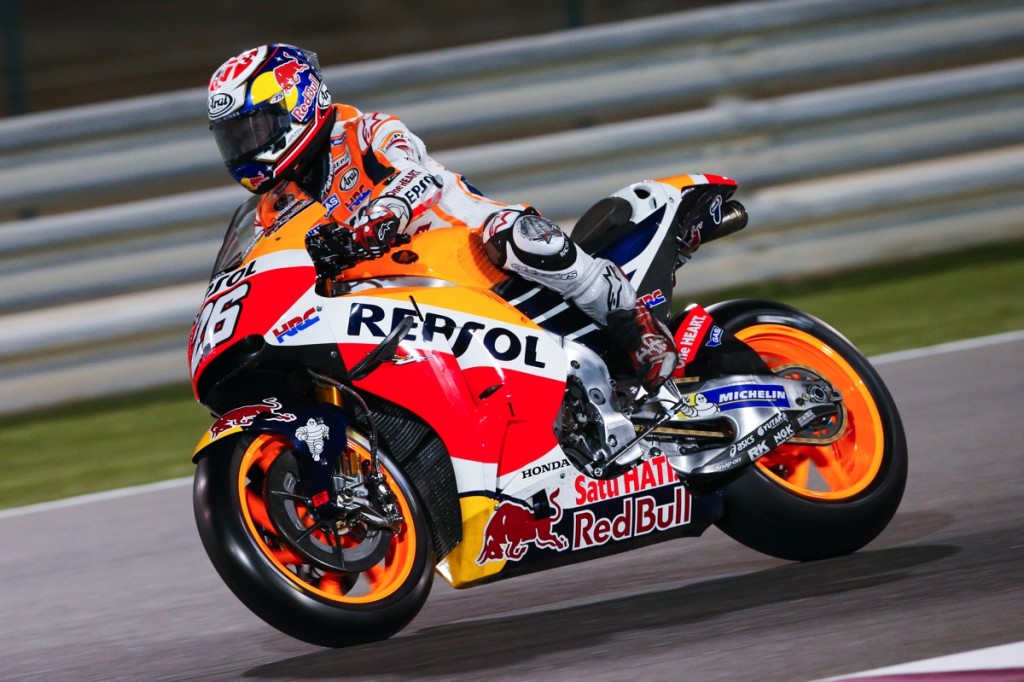 The rest of the satellite Honda riders and machines had to settle with rankings outside the top 10, which likely shows that the Honda-powered field still have plenty of gremlins to fix up. The situation would eventually change on the final day of testing, but not by much.

DAY 3
Having missed out his chance to dominate Day 2, reigning world champion Jorge Lorenzo returned to top form on the third and final day of testing. Lorenzo once again asserted his authority by being the only rider to have lapped the Losail circuit under the 1:55.000 mark with his best time of 1:54.810. 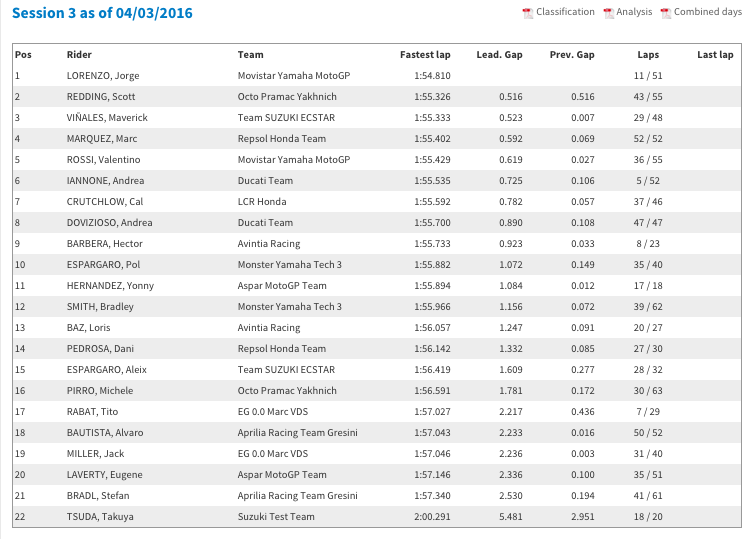 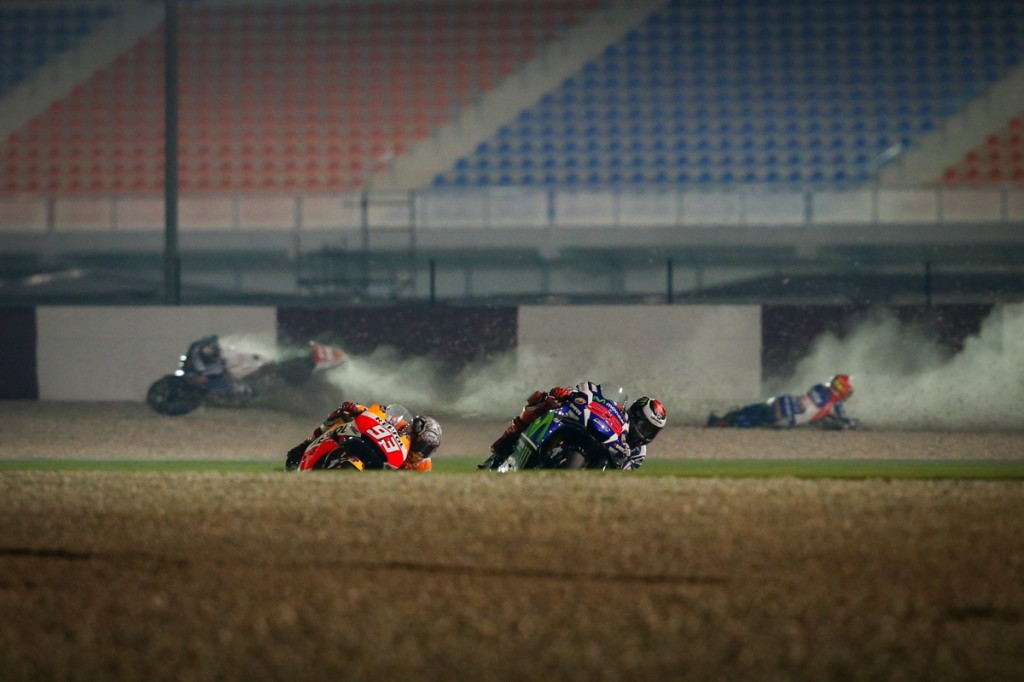 Team Suzuki Ecstar’s Maverick Viñales continued to show his top form on day 3 as well by ending the session as the third fastest rider. His best time of 1:55.333 sees him improving from the fastest time he set the previous day, making this young Spaniard undoubtedly one rider to look out for in the coming season. 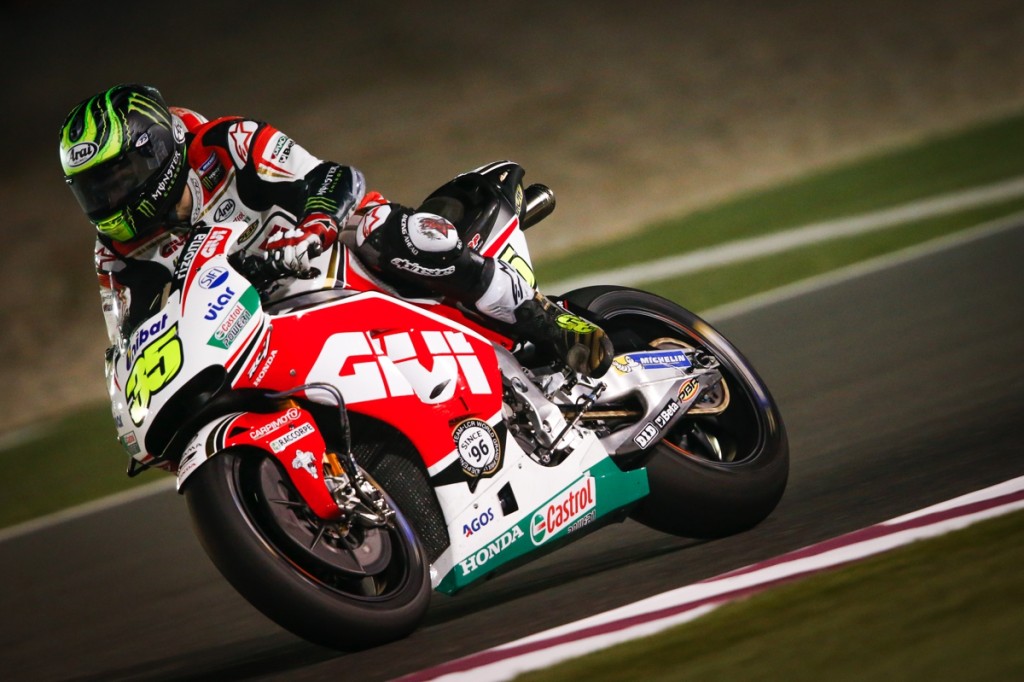 For the Honda encampment, things got slightly better on the final day. Fortunes were mixed for the factory-backed Repsol Honda team as rider Marc Marquez bounced back from the bleak outing of Day 2 to rank himself fourth fastest on the final day. His teammate Dani Pedrosa, on the other hand, would struggle throughout the day and eventually ranked 14th fastest. 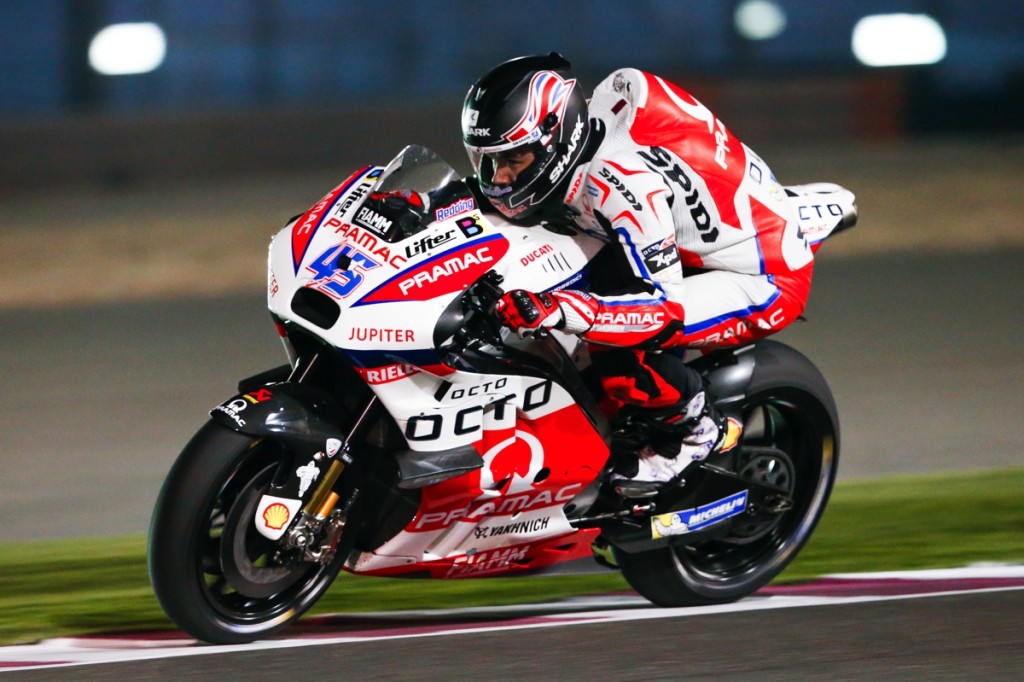 For the satellite Honda field, the day culminated on a good note when LCR Honda rider Cal Crutchlow manage to rank himself seventh fastest. Both Crutchlow and Marquez stood as only two Honda machines ranked in the top 10 though, suggesting perhaps that the new 2016 Honda-powered machines still need more fine-tuning for its other riders besides the Brit and Spaniard mentioned earlier.

Obviously, the Honda-powered encampment have plenty to do still, and very little time left to do it as the season-opening race in Qatar is less than a fortnight away.

MotoGP will return to Qatar in full swing for its season opener scheduled from March 18 to March 20.