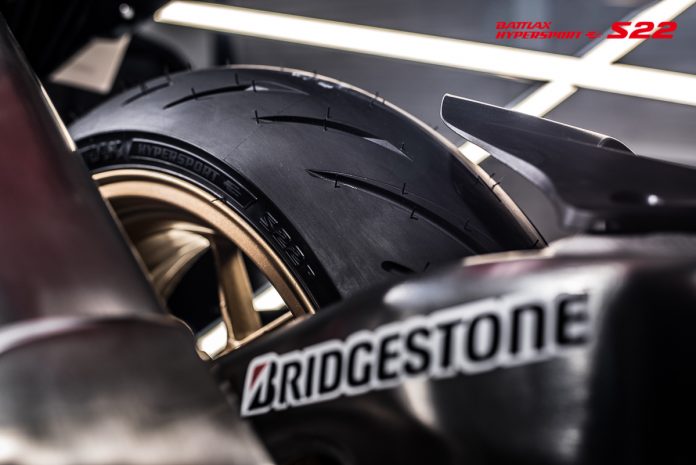 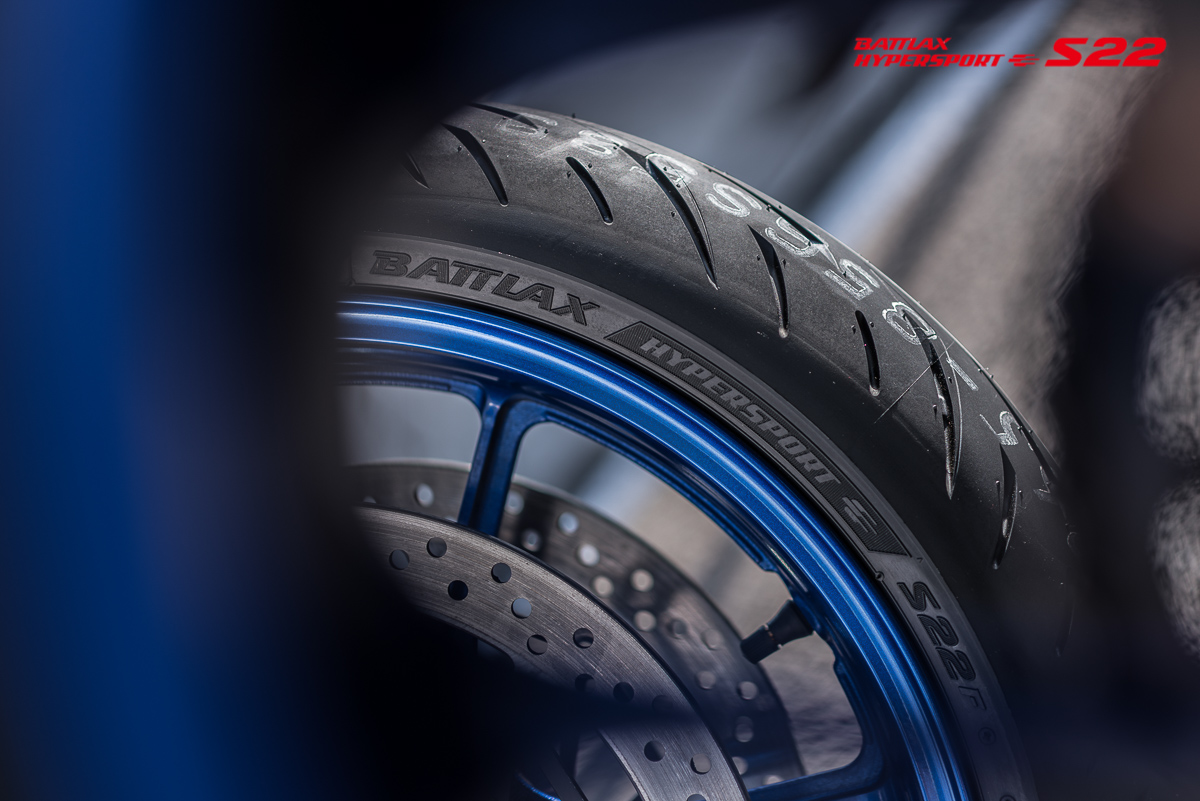 It was earlier this month that we flew 15,000km all the way to Jerez, Spain to test out the latest street tyre from a very famous Japanese tyre manufacturer; the Bridgestone Battlax Hypersport S22.

The S22 is a sport tyre option for street use that is the next evolution of the highly-acclaimed Battlax Hypersport S21.

Bridgestone Motorcycle & Scooter Tyres Centre – Malaysia (RM Mart Sdn Bhd or BridgestoneMoto) handed us the golden opportunity to test out their latest sports tyre not just anywhere in Spain, but at the legendary Circuito de Jerez.

Around 45 motoring journalists from around the globe took this chance to test the latest Bridgestone Battlax Hypersport S22 and experience how it reacted on a wide range of supersport and superbike machineries. 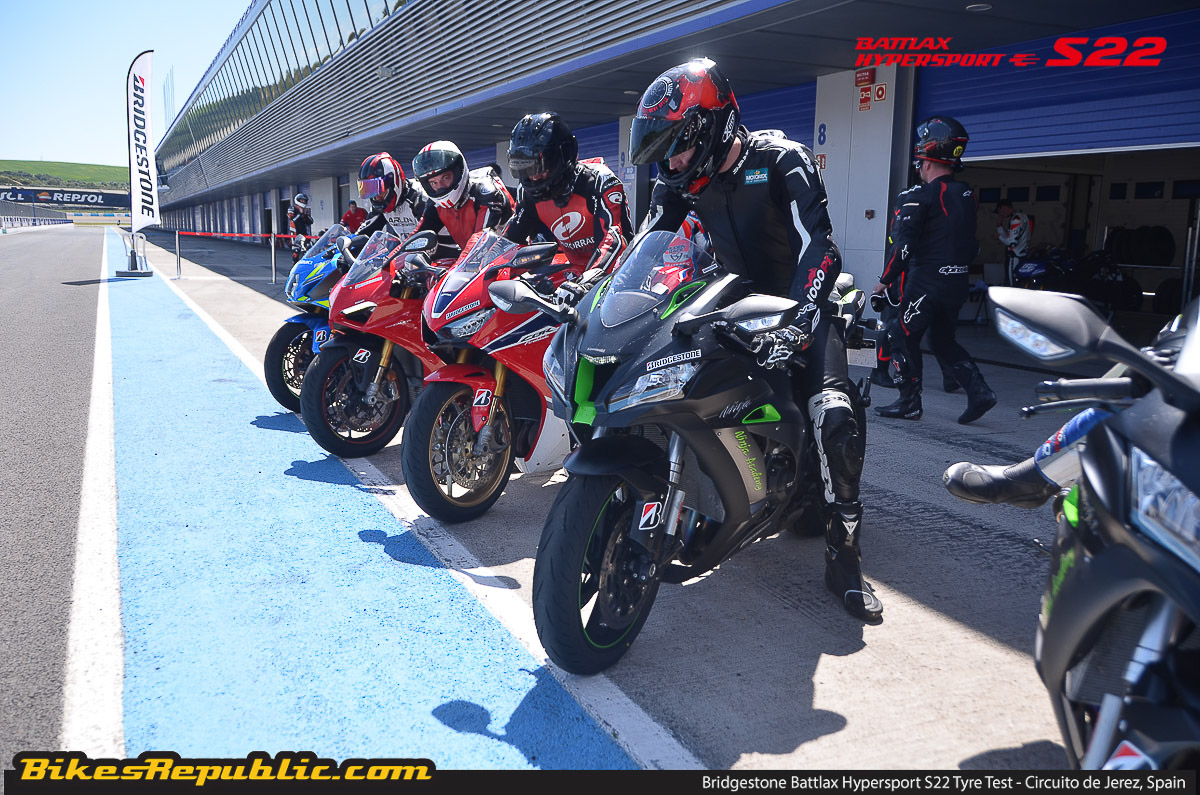 Present during the test was the latest 2019 Kawasaki Ninja ZX-6R which is the first bike in the world to come with the new Bridgestone Battlax Hypersport S22 as standard. 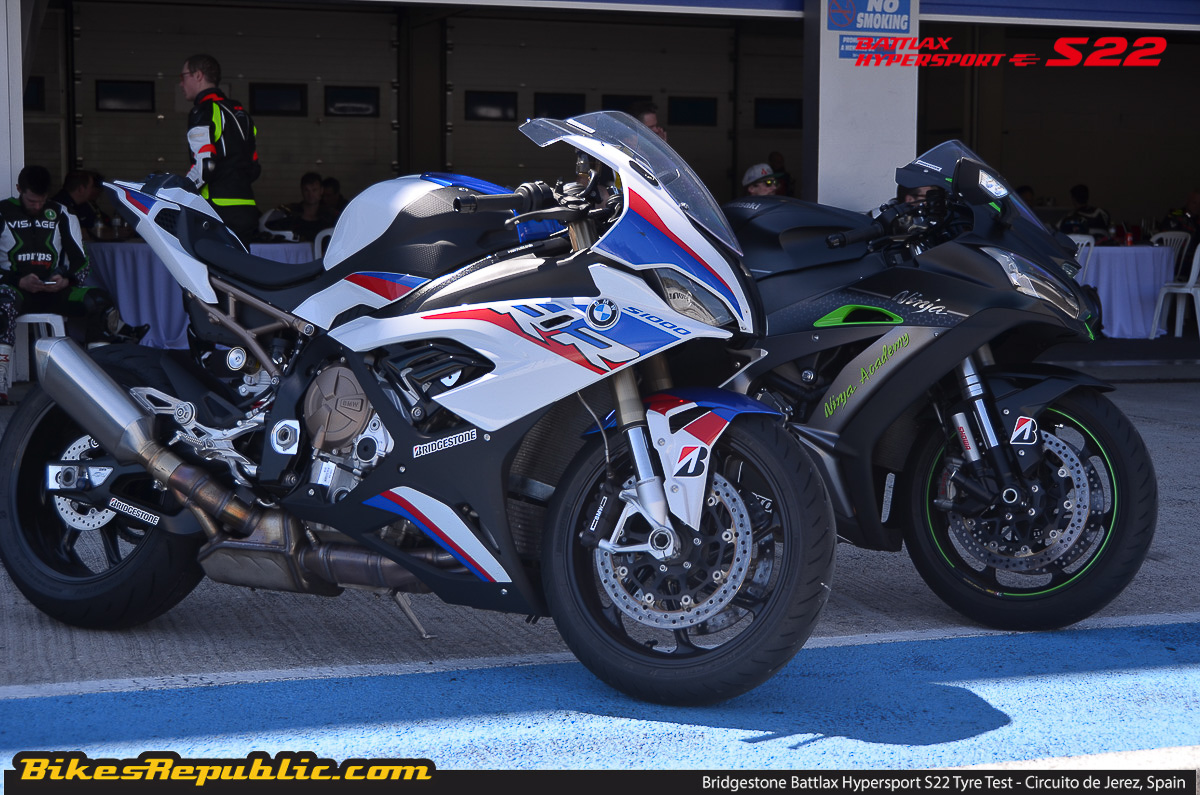 What’s new about the Hypersport S22? 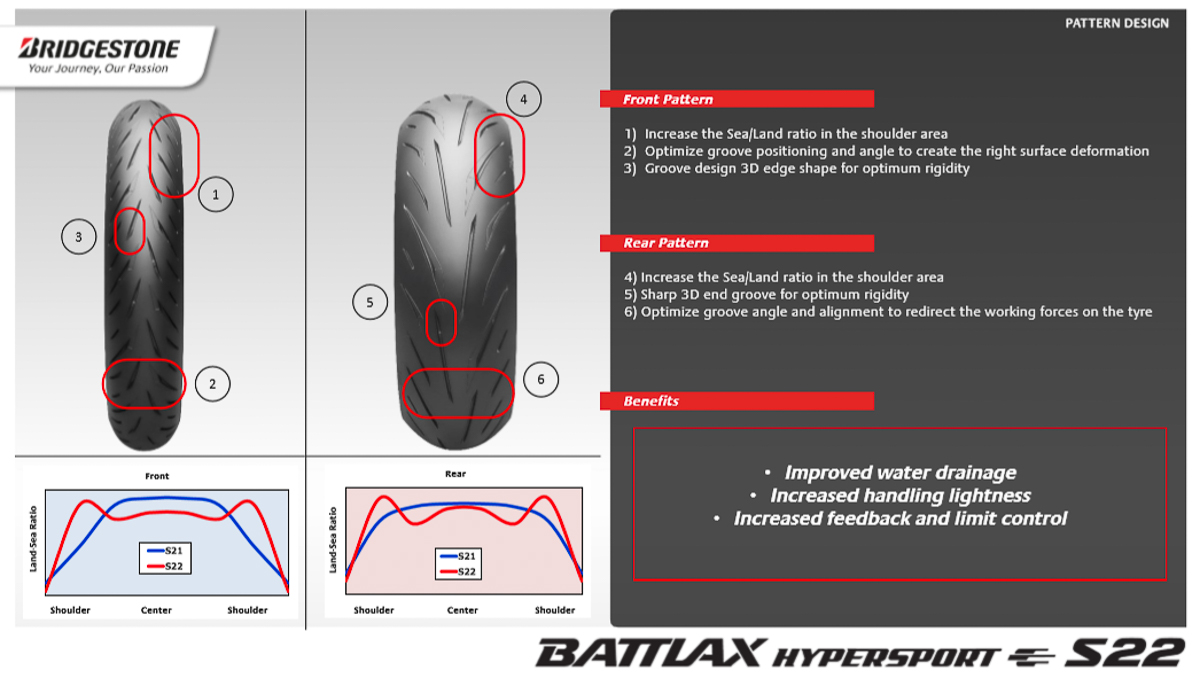 Well, after the huge success of the Hypersport S21, it seemed that it would be a monumental task for the Japanese tyre manufacturer to come up with the next evolution of their sport street tyre. But guess what?

They succeeded and the Bridgestone Battlax Hypersport S22 was born with better grip in both dry and wet conditions that not only offers improved riding performance but also a more enjoyable motorcycling experience to match! 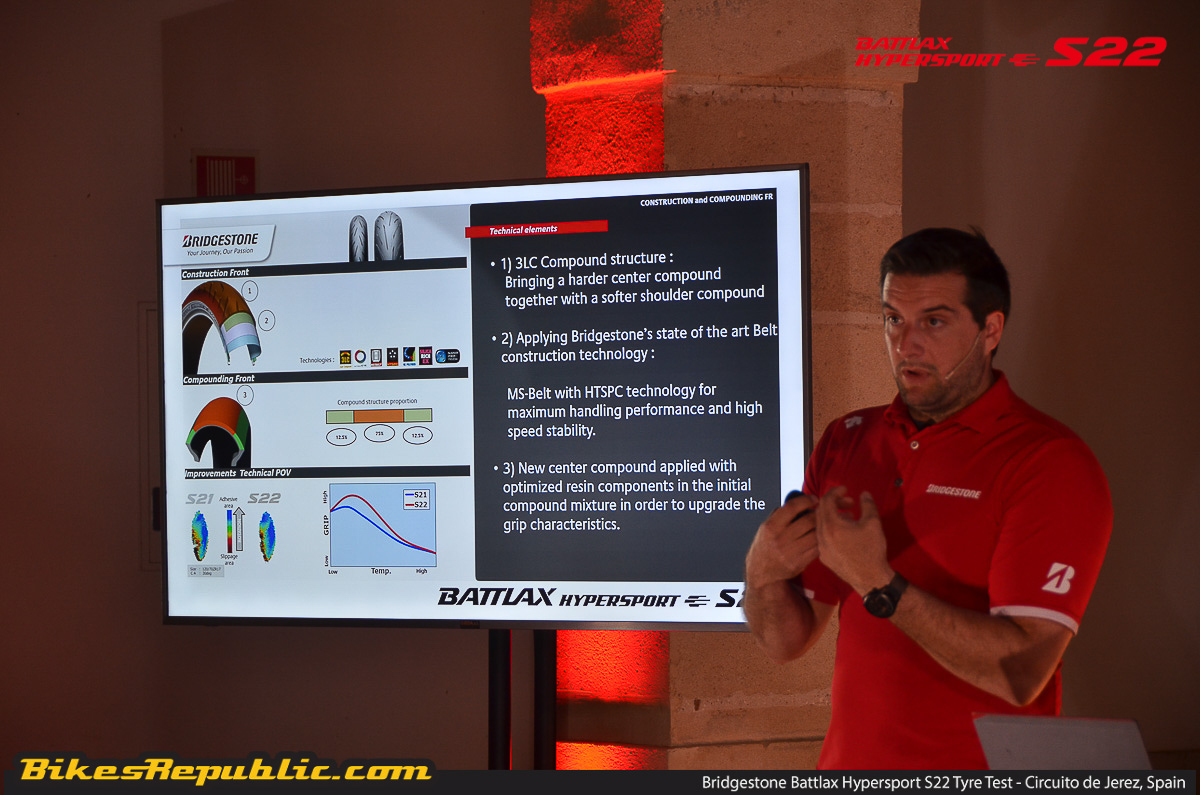 This is all possible thanks to newly-developed compounds from the silica-enriched formulation and pattern with better land-sea ratio. This also improves water drainage, heighten agility, and provide better feedback.

What’s so special about these new improvements? 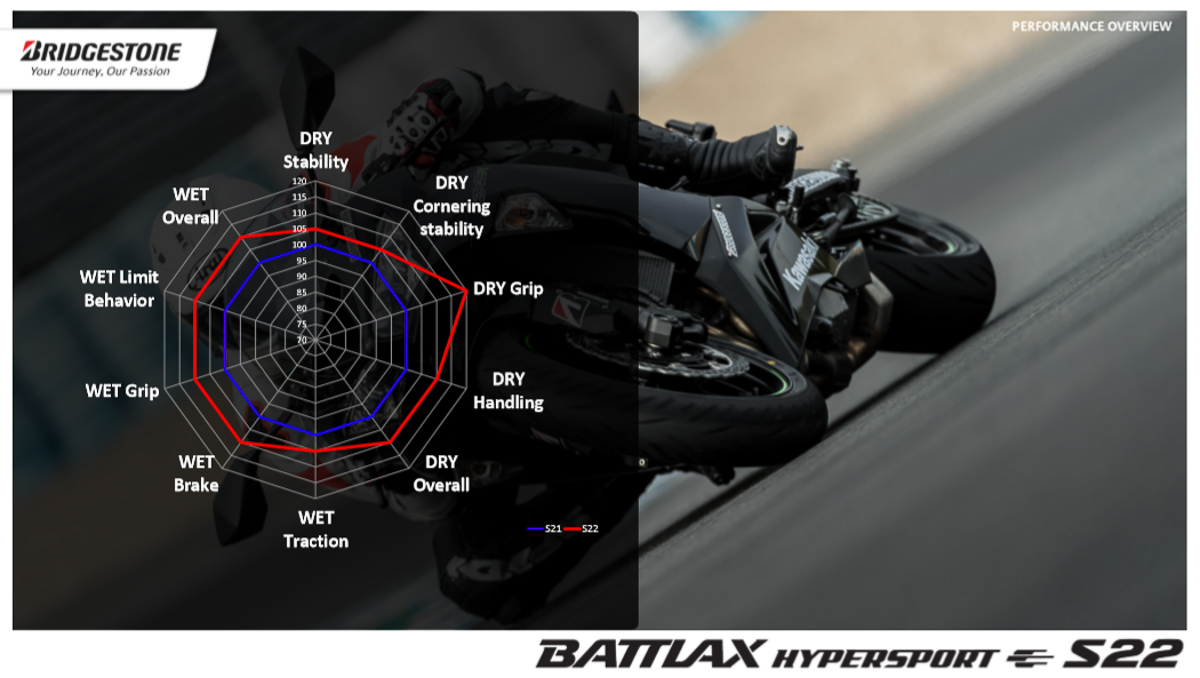 Let’s look at the new pattern that can be found on both the front and rear tyres, shall we? According to Bridgestone, getting the right feel and feedback especially in wet and rainy conditions has been further enhanced, especially on the tyre’s shoulder thanks to a new land-to-sea ratio. 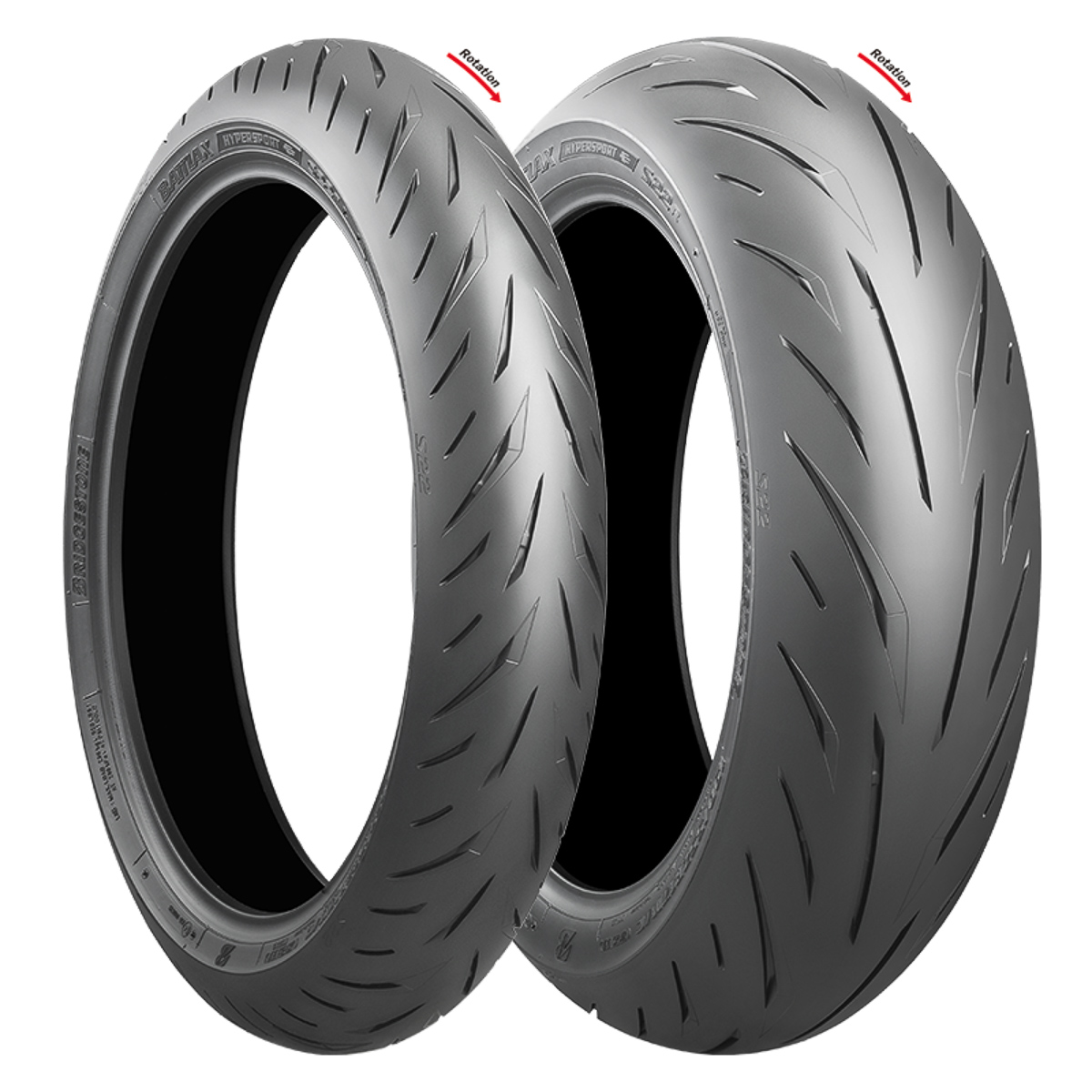 This means that even when the bike is leaning, you can be confident that there’s enough grip to ensure that you’re safe when tackling corners in the rain (at least, better than what the previous gen S21, which was already good to begin with). 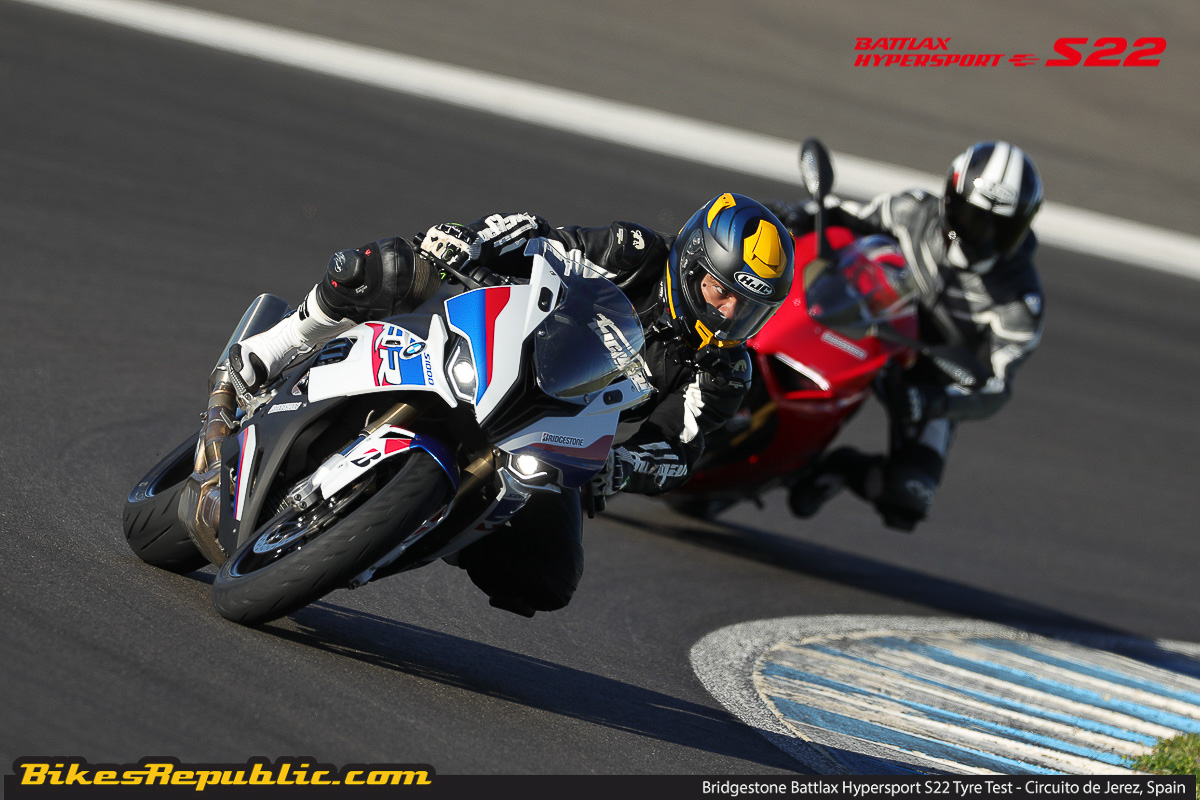 The second aspect when it comes to superior wet riding performance is the new silica formulation used in the production of the Hypersport S22. Bridgestone was able to inject 25% more silica (compared to S21) into the rubber due to the use of fine-particle silica.

In other words, you will instantly feel more comfortable riding in the wet since more silica is in contact with the road (more silica = better wet performance and grip). 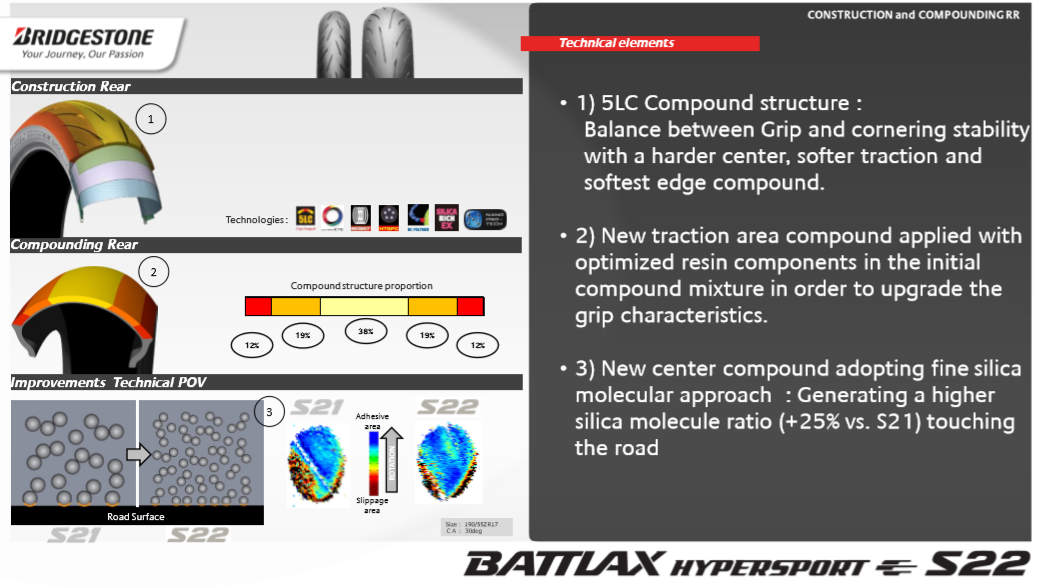 The last and probably the most important improvement is the new multi-compounds used the construction of both the front and rear tyres. 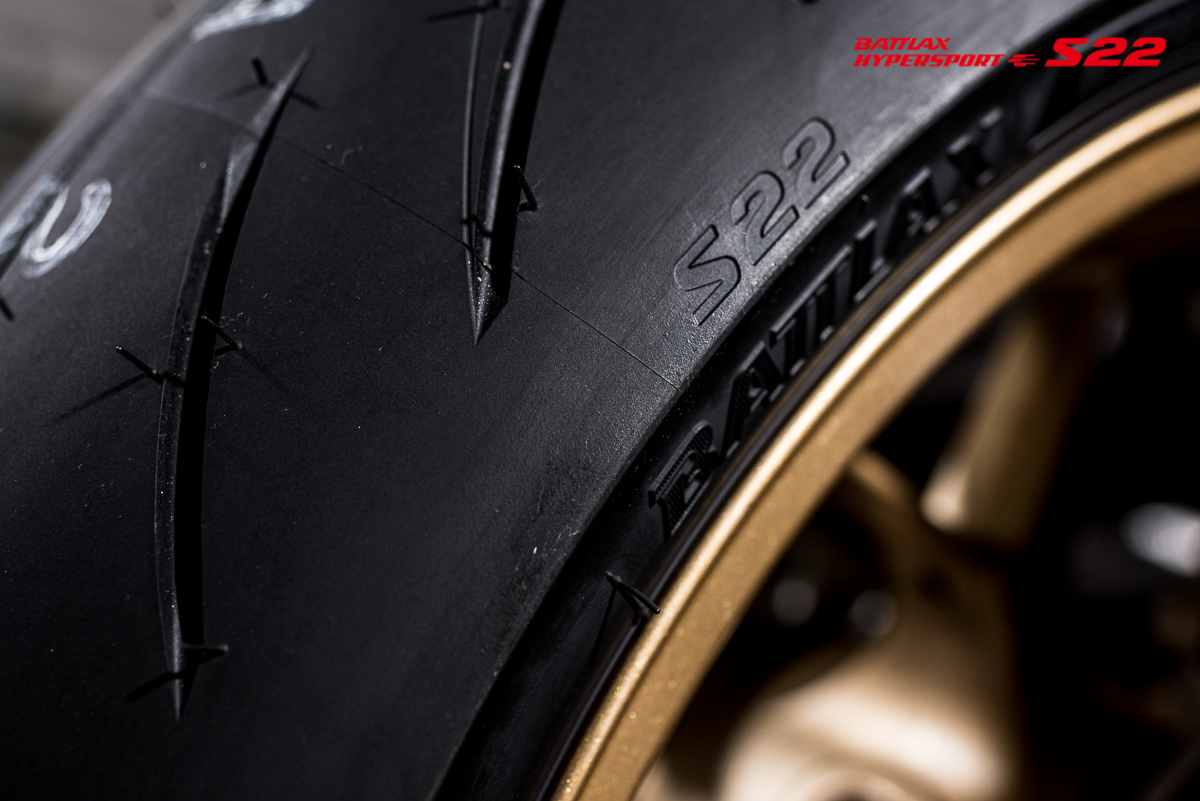 This in turn provides ‘higher levels of sports riding performance’ as the S22 can warm up quickly and operate at its optimum level throughout a bigger temperature scope.

The new resin also offers a longer life which means you don’t have to change them too regularly and burn a huge hole in your wallet.

So, what type of rider can benefit from the new S22? 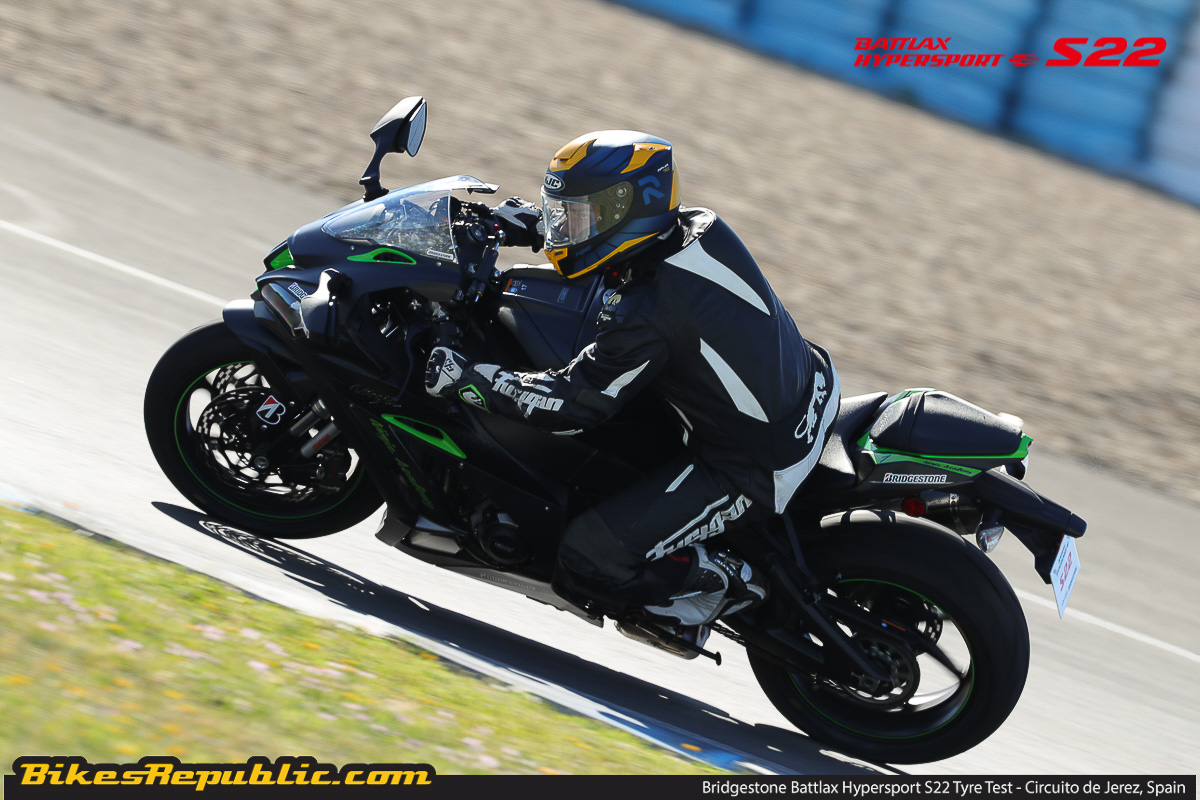 If you frequently ride your supersport or superbikes on a regular basis (daily use like to and from the office, etc), enjoy sports riding (weekend warrior up and down Genting), or just starting to join track days, the Battlax Hypersport S22 is definitely for you.

The main reason is because of its ability to provide high grip in both dry and wet conditions. This is especially important here in Malaysia where it is hot and humid with regular and unexpected rain almost every week of the year. 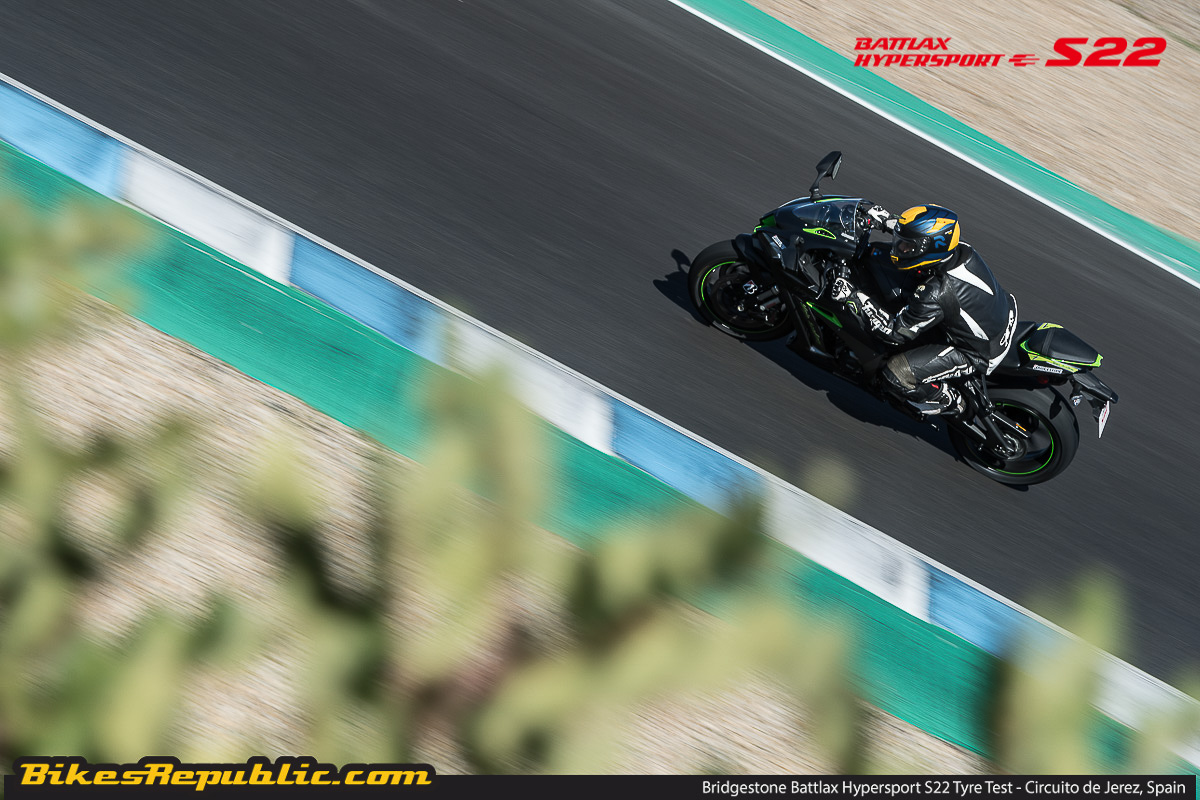 They also last longer thanks to the new compounds combination where they are very reliable for everyday use and provide enough grip for some fun in the track.

The tyres work well in providing track-riding pleasure especially for beginners as long as riders don’t push the limit or when track temperatures exceed 55°C (this is rare at Sepang International Circuit but does occur when it gets really, really hot).

How did they perform? 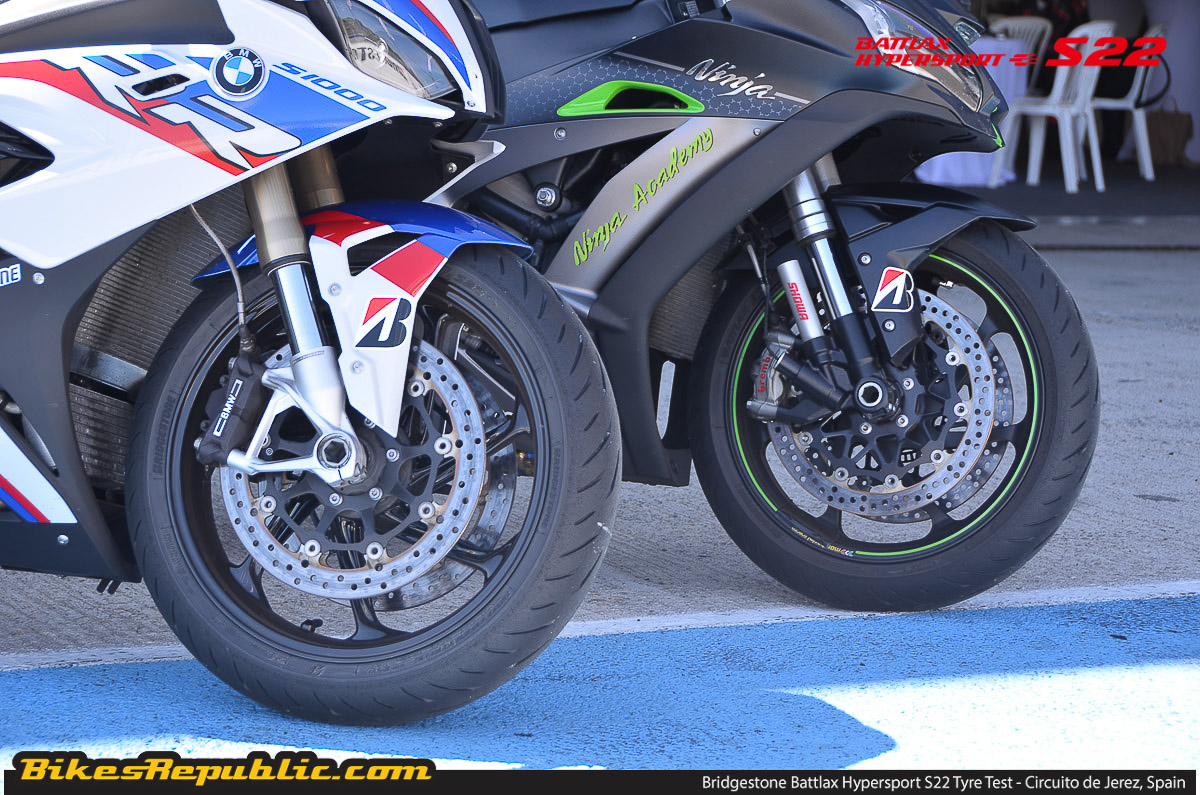 For a sport street tyre, we found out that they warm up exceptionally fast even in super cold condition during out track test at Jerez (it was around 15°C at noon when the sun was out with no clouds in sight).

It was colder in the morning and getting on the brand-new 2019 BMW S 1000 RR in a foreign track was not as scary as initially anticipated due to the fact that the tyres offered optimum grip after just a couple of laps to warm up. 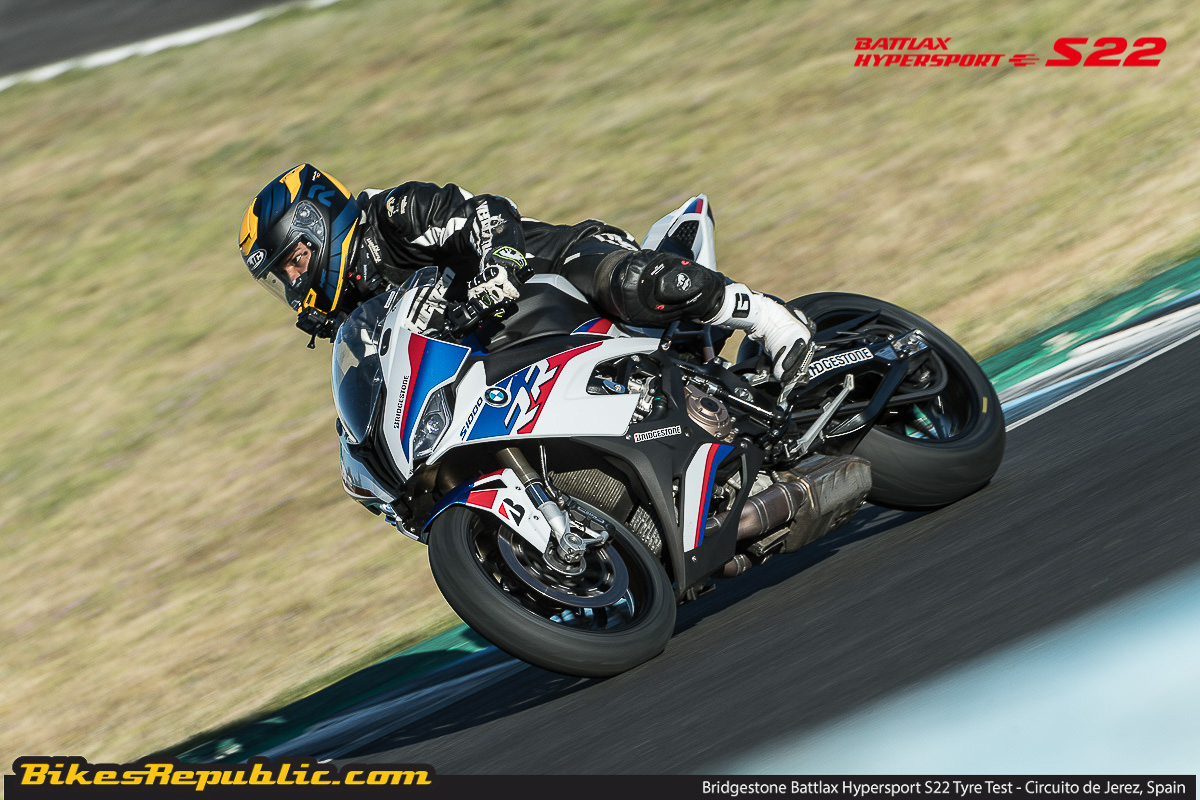 The experience on the BMW was sublime but when the temperature went up, we were able to test it out on the Kawasaki Ninja ZX-10R SE and it offered even more in terms of grip, cornering speed, and braking stability.

That same confidence-boosting feel was again experienced when we went out on the new Kawasaki Ninja ZX-6R and the previous gen Honda CBR1000RR Fireblade SP.

Even with an array of bikes offering different riding characteristics, it was clear how the new Battlax Hypersport S22 provided such a beautiful riding experience (especially when the bikes are properly tuned for that particular circuit). The feel and feedback were precise and constant throughout the day, which is amazing to say the least. 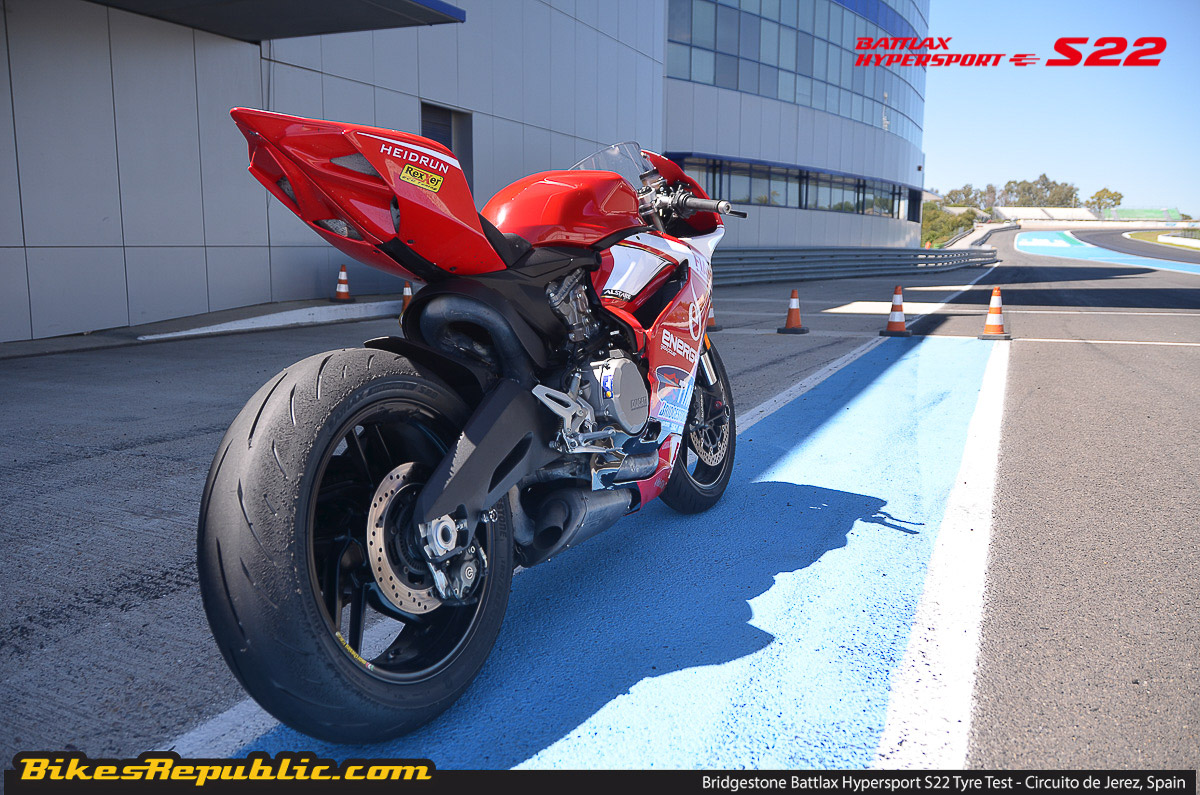 Bridgestone’s state-of-the-art ULTIMAT EYE™ technology has a huge say on how the S22 was developed as it was able to understand how the tyres behave in different riding conditions and work with the data.

The result? Less slippage on the contact patch which also means better grip, each and every time. 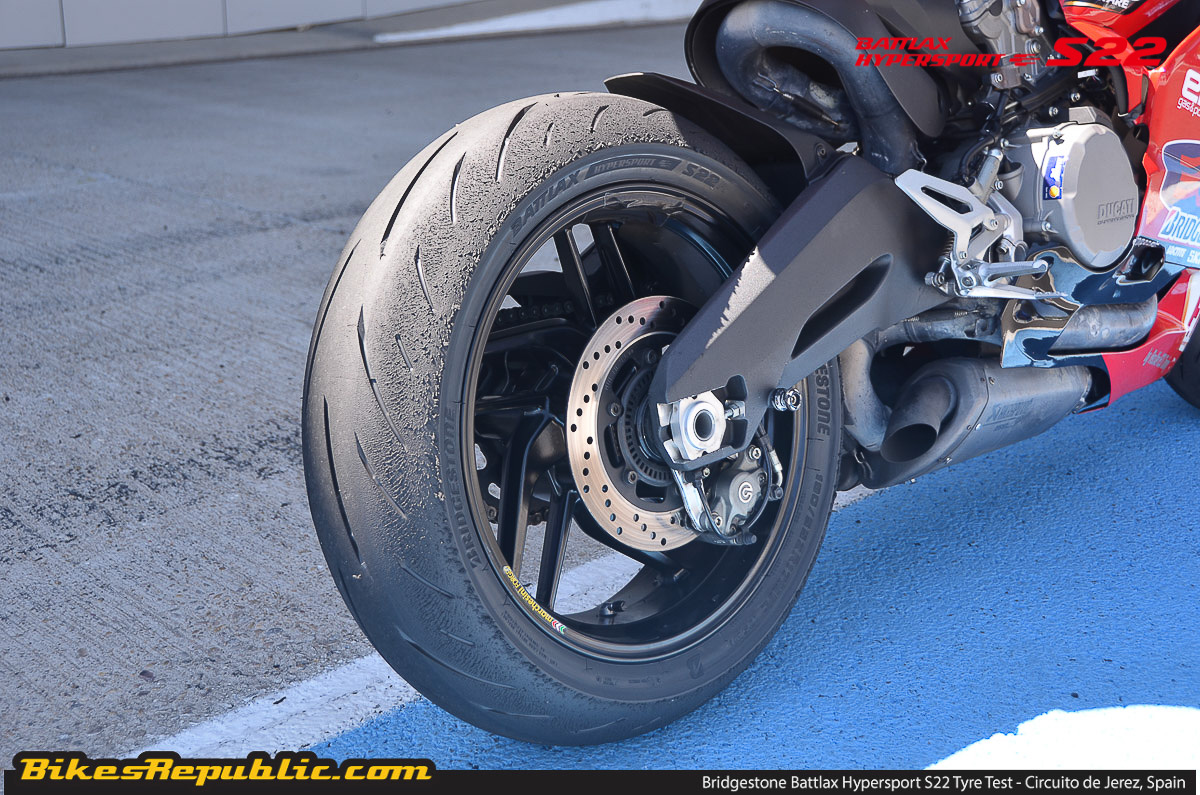 So, what’s our conclusion? 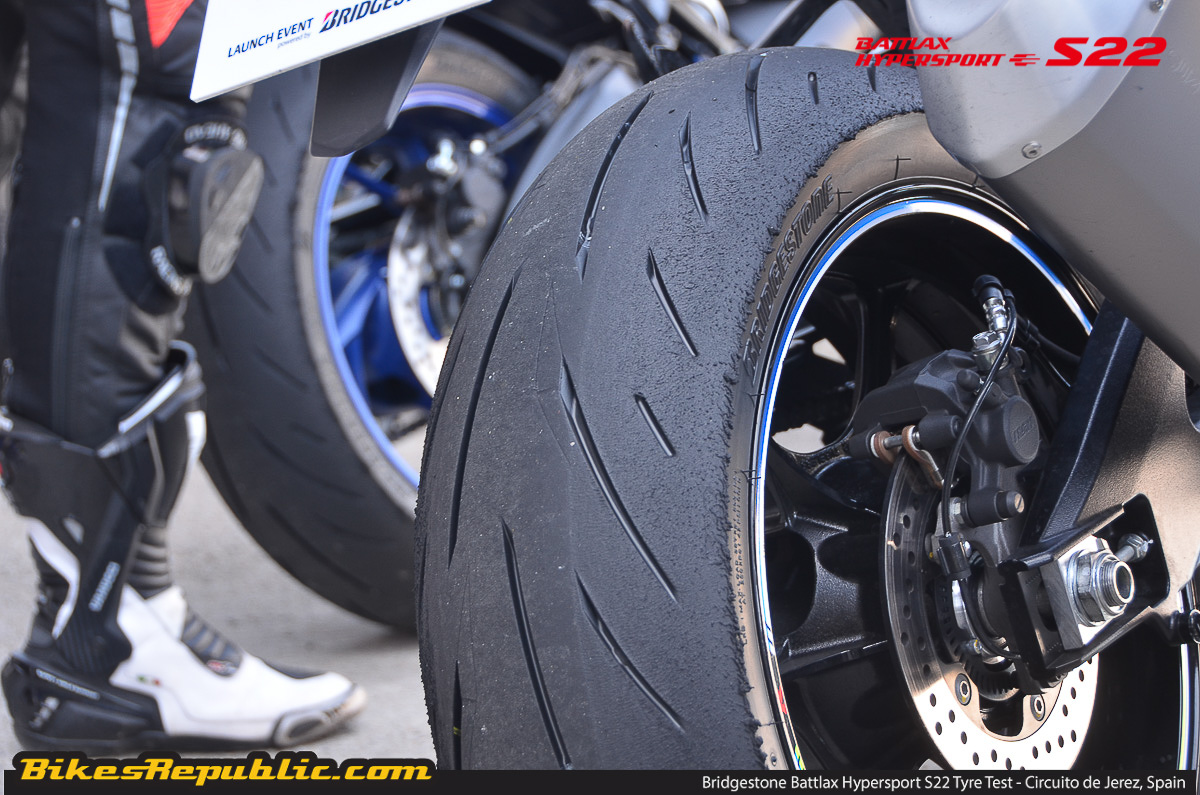 The new Bridgestone Battlax Hypersport S22 is indeed a tyre that not only ‘talks the talk’ but also ‘walks the walk’. They definitely did not stretch the truth when they say the S22 offers better grip in different riding conditions even in colder temperatures presented in Jerez. 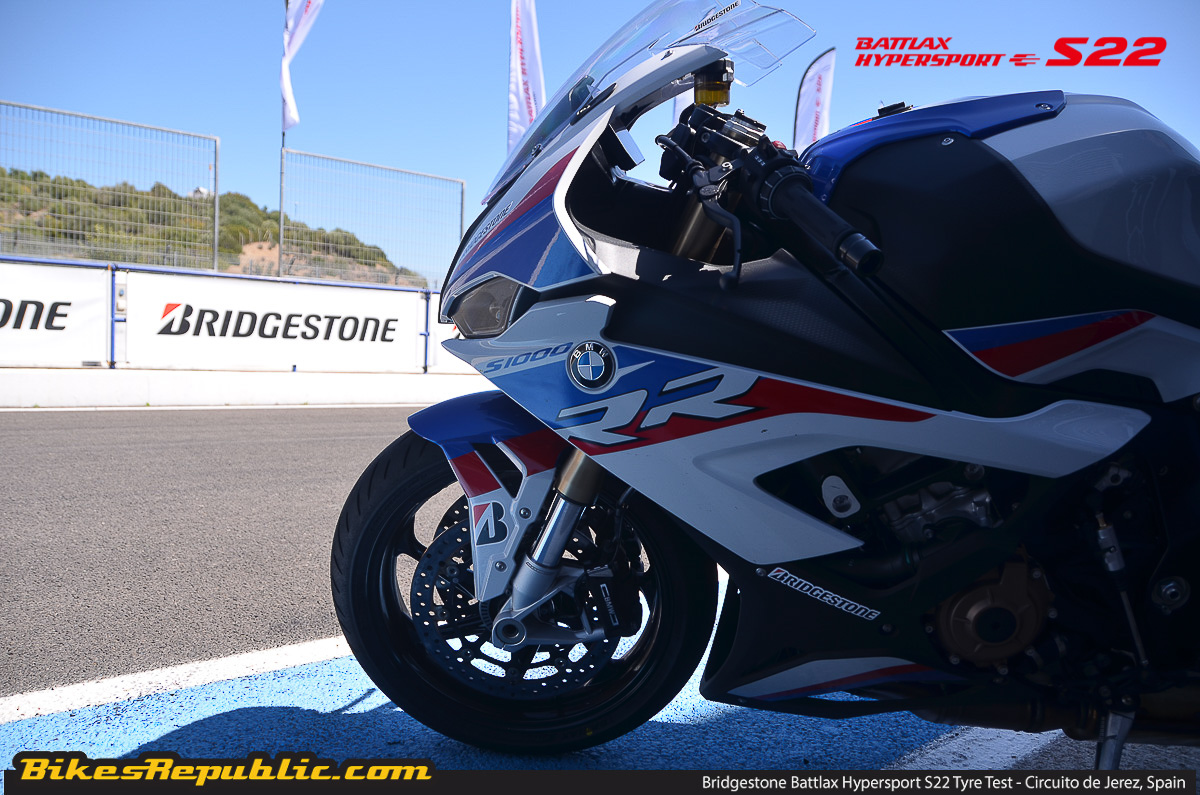 There are already so many reviews praising the previous generation S21 and with Bridgestone constantly arming themselves with endless data from research and development, they were able to push that performance limit even further with the latest Battlax Hypersport S22. 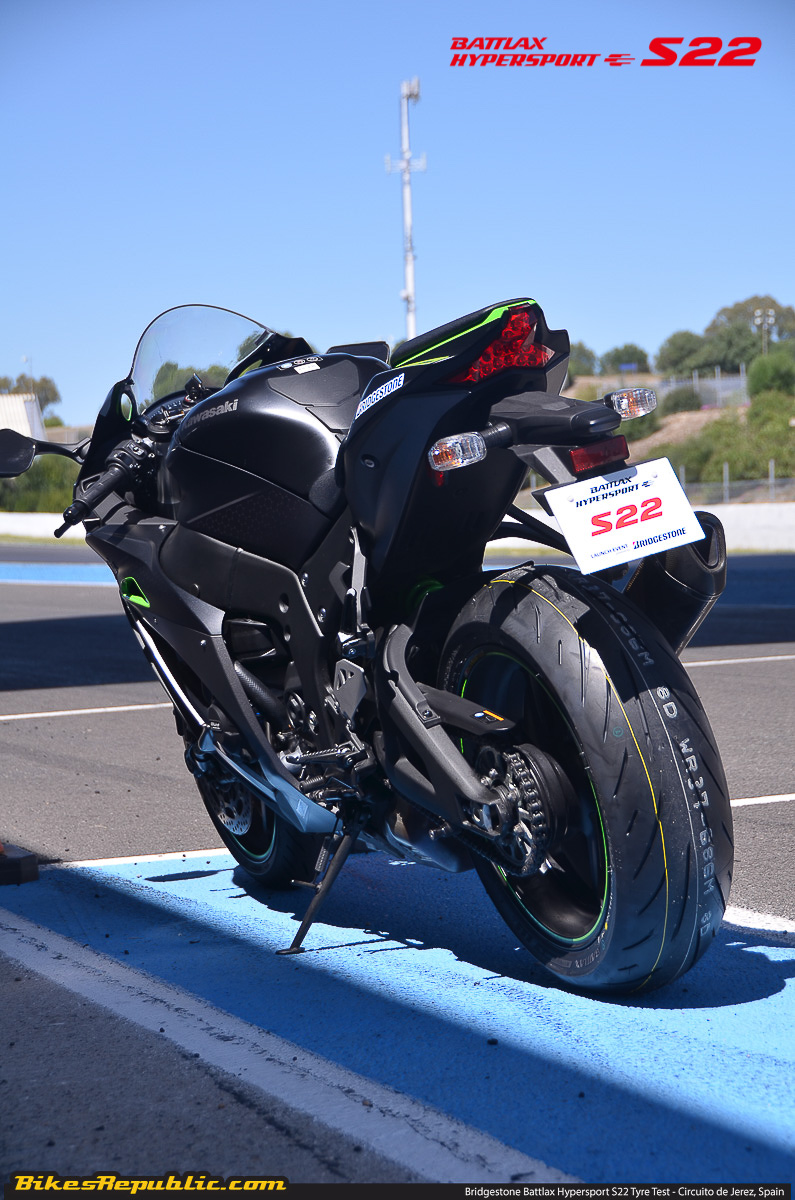 The S22 is already available in Malaysia and if you’re looking for a set of rubbers that has long life, improved dry grip, and excellent wet riding performance; look no further than this affordable option that is the Bridgestone Battlax Hypersport S22 (from RM570 – RM960 per tyre).