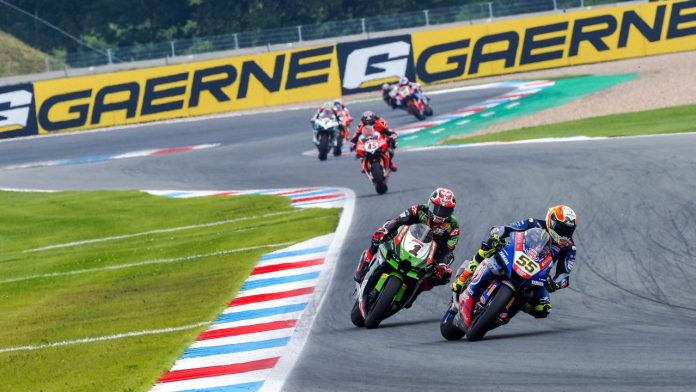 After securing Pole Position during Saturday’s Superpole session, the Northern Irishman proceeded to pilot his works Kawasaki ZX-10RR to conquer Race 1 on the same day, as well as Sunday’s Sprint Race.

In Race 2, Rea had it tougher after dropping down the order following an opening lap incident that saw the elimination of key rivals including Turkish Yamaha ace Toprak Razgatlioglu.

Despite dropping down as low as eighth, Rea kept things together and fought back up the order, making light work of Michael Van Der Mark, teammate Alex Lowes, Scott Redding and Michael Rinaldi before hunting down surprise leader Andrea Locatelli.

Rea eventually got past the Italian to claim the win, as well as his fourth career hat-trick (winning all three races in a single weekend) since WSBK introduced this three-race format in 2019.

Despite relinquishing a chance at his maiden victory, WSBK rookie Locatelli instead settled for his maiden podium whereby the the PATA Yamaha rider finished second ahead of Ducati’s Scott Redding in third during Sunday’s race.

With his Dutch hat-trick in the bag, and title rival Razgatlioglu knocked out on Sunday’s Race 2, Rea still commands the championship standings with 243 points to his name – 27 points clear of Razgatlioglu.

WSBK action resumes next month with its sixth round at the Most Circuit, Czech Republic on Aug 7 & 8.