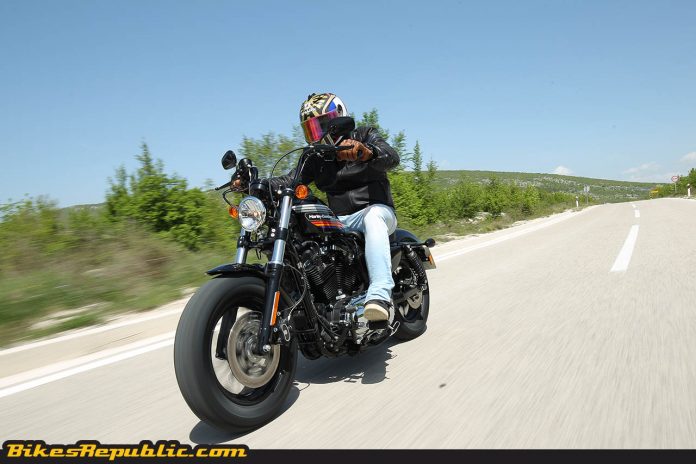 So where the Harley-Davidson Sportster Iron 1200 is the hardcore chopper with performance that could make a sports bike blush, the Sportster 48 is the chilled out cruiser with a design that looks like it came right off a 60s era vintage Harley.

That iconic fat front tyre, the low slung body, forward controls and single-passenger seat are all meant to make the bike look retro cool. And cool it definitely is. 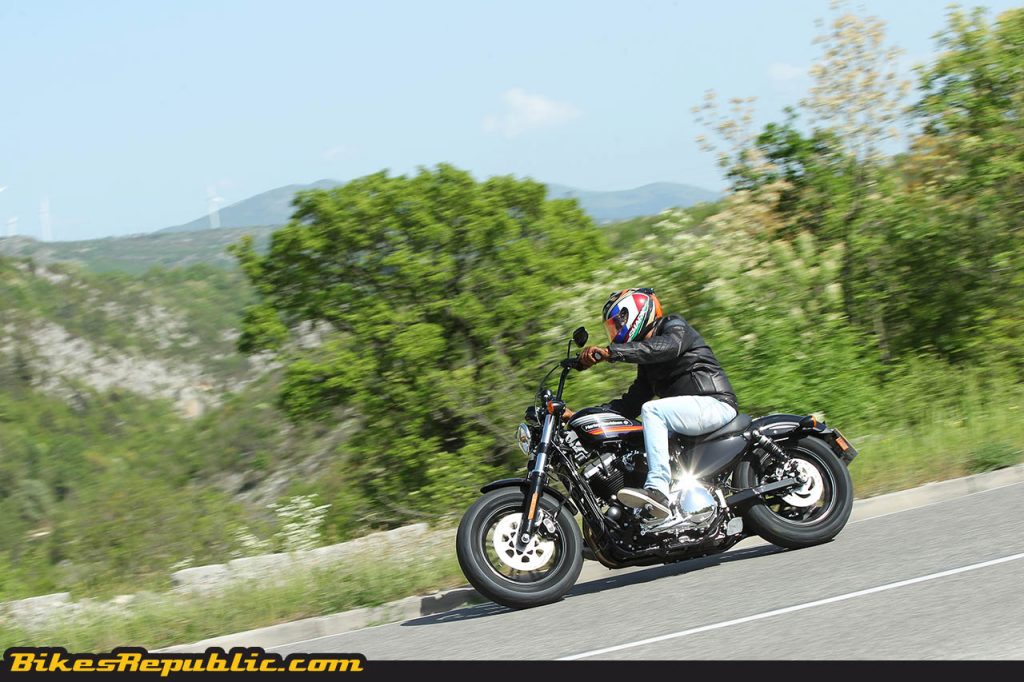 I have always been a huge fan of the 48. I have a 2014 Sportster 48 and love every bit about it, especially because of its laid-back yet powerful character, and because of its classic good looks of course. So if the weather is not too hot and I am having an easy day, I usually take out the 48.

The Iron 1200 may have that iconic chopper like styling and the ergonomics of it makes you feel totally in control weaving in and out of corners. But the 48 is different, it encourages you to slow down and enjoy the ride, some call it a thinking-man’s bike, the man with a free spirit but yet has places to be and people to see. 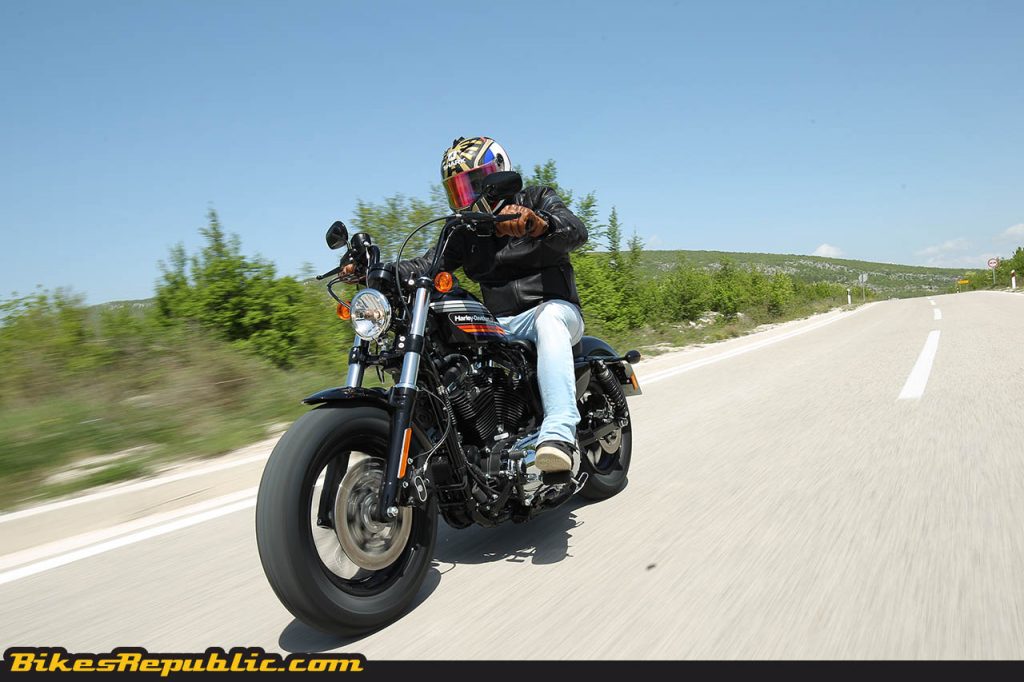 The 48 is lower than the Iron, a little over an inch closer to the ground, with a little more rake and trail and a shorter wheelbase. Then of course there are the tyres with the 48 getting beefier 130 section front tyres and a smaller 16 inch rim while the Iron 1200 gets 100 section tyres and bigger 19 inch rims. Both share the same 150/80B 16 rear tyre.

The wheels and the sitting position are the only difference between the two bikes, but the bikes are far from the same. The Iron 1200 lets you carry lower lean angles into corners which means more speed and agility, while the 48 feels like it is hardly done bending over when the foot pegs meet the road. 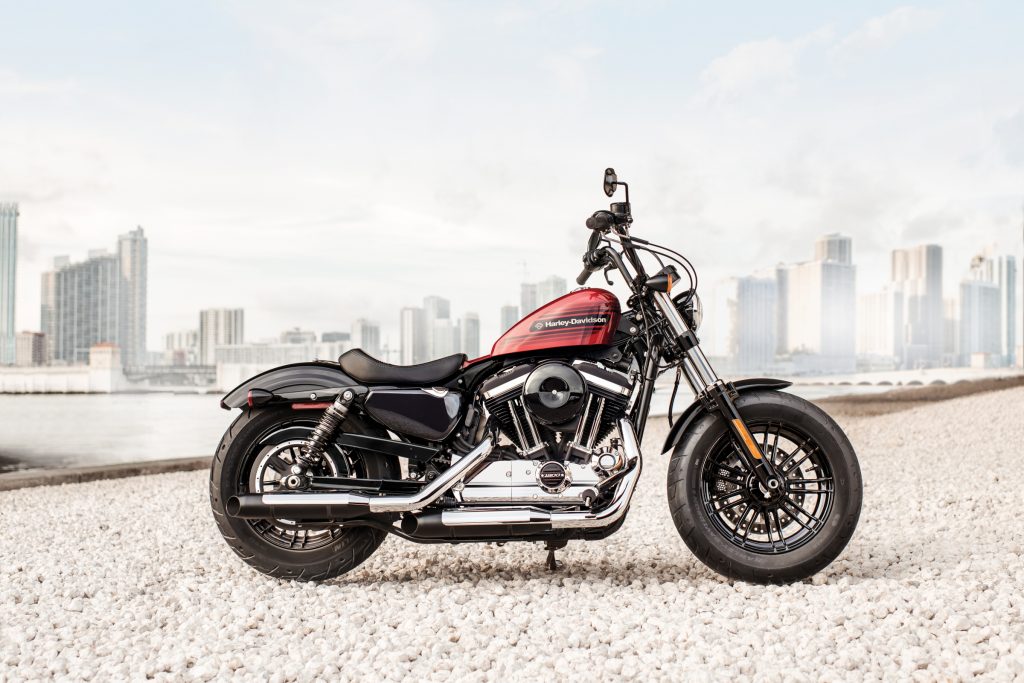 The build of the bike gives it a heavy metal feel to it, you will come to appreciate the weight of the bike. Cables running down the handle bar and beneath the frame all suggest that this is bike that will give you plenty to customize later on in its life, so you may never get bored of owning it.

Living in Kuala Lumpur means you’re constantly surrounded by traffic, construction and buildings, and though the 48 felt at one with the roads carved into the cliff side roads of Split, Croatia, I will confess through experience that it is also perfectly adapted to life in the concrete jungle. It does not have a very good turning radius for tight u-turns, but at least you will still look cool while clumsily turning around. 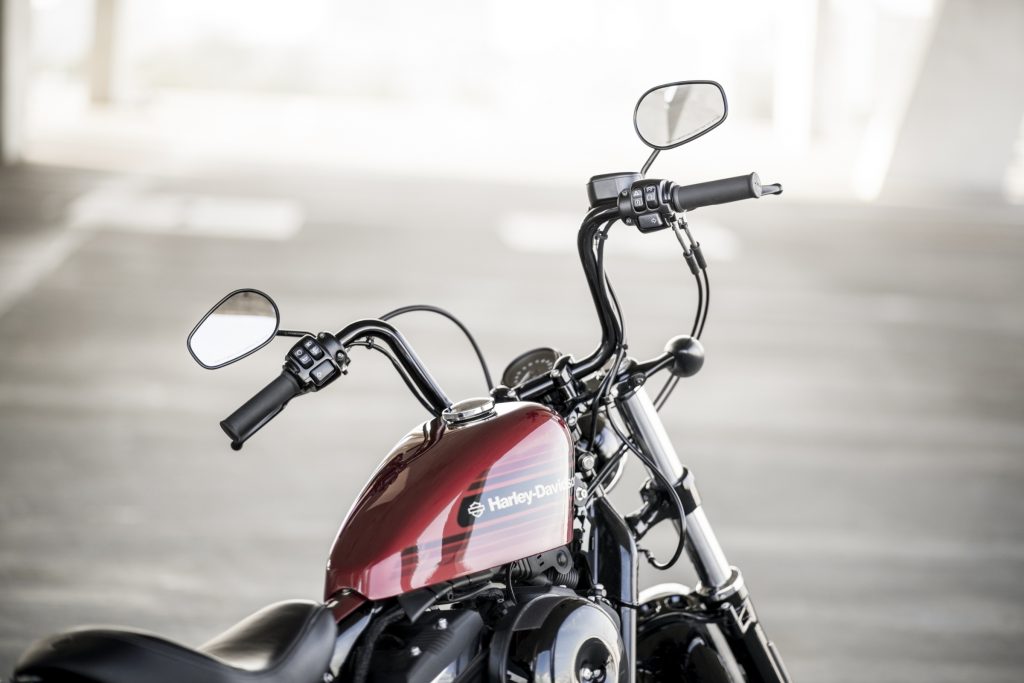 And so, after spending some time with the Iron 1200, I hopped on to the new 48 Special. The Special variant gets some chrome highlights around the exhaust and other shinny bits. It also gets the same mini-ape bars as the Iron 1200 but not the headlight cover.

At first ride both bikes offer about the same character, and why shouldn’t they as both are powered by the same air-cooled evolution 1202cc engine with the same 100Nm of torque. Even the gearbox and all of its ratios are the same. 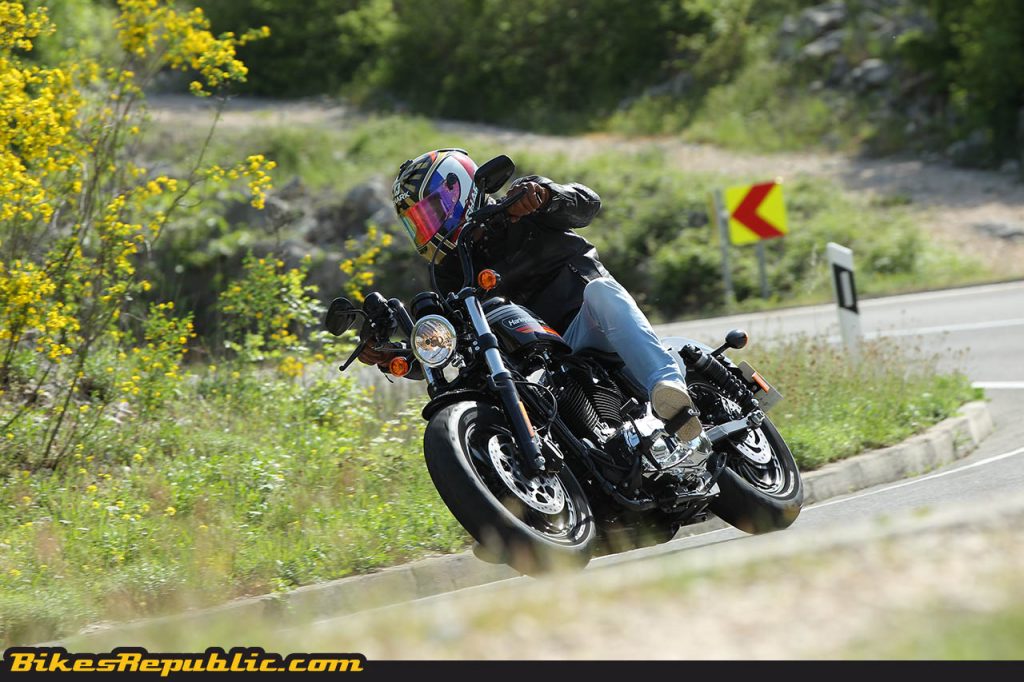 But the similarities end at the first corner, each bike has its own unique character in a corner. There is an immediate feeling that the 48 is a little reluctant to bite in as compared to the Iron. This is because of the thicker front tyre, but once it settles in the front end feels more confident especially during the exit where the Iron can feel a little nervous as soon as it squats under power. 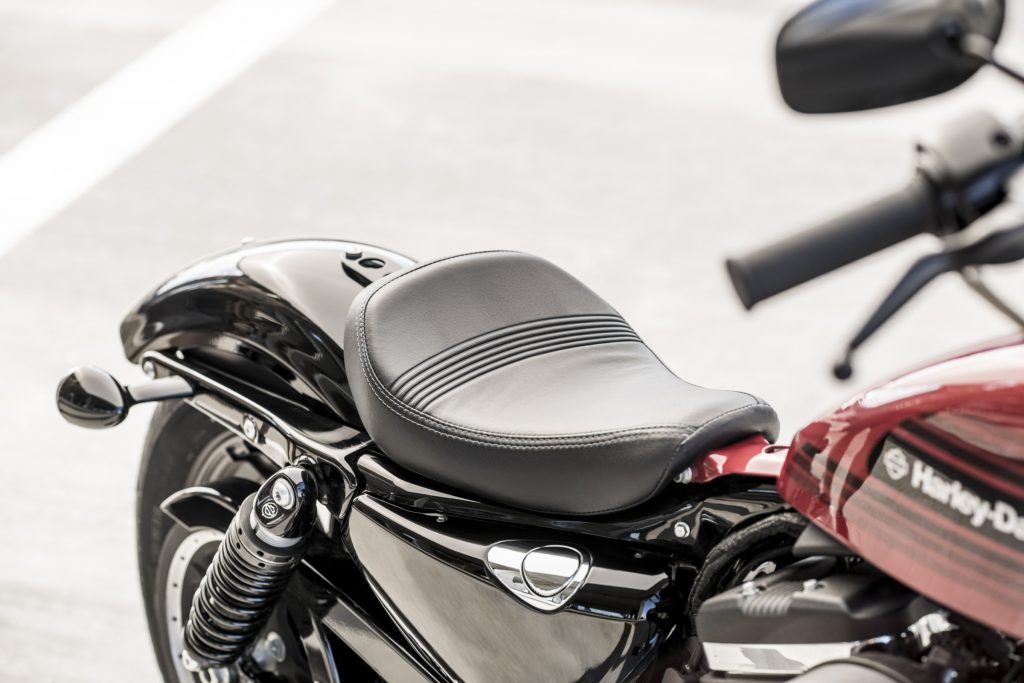 The Iron 1200 is also better to cover miles with. The 8-litre peanut tank of the 48 gives it a range better suited to city riding. And its outreached handle bars, foot pegs and smallish seat will kill your back after about an hour or so of riding. It becomes so uncomfortable that you simply want to get off the bike. It is a common problem with the 48, I suffered the same with my own bike and the solution was to get a bigger, more supportive seat. The seat on the Iron 1200 though is fantastic to say the least. 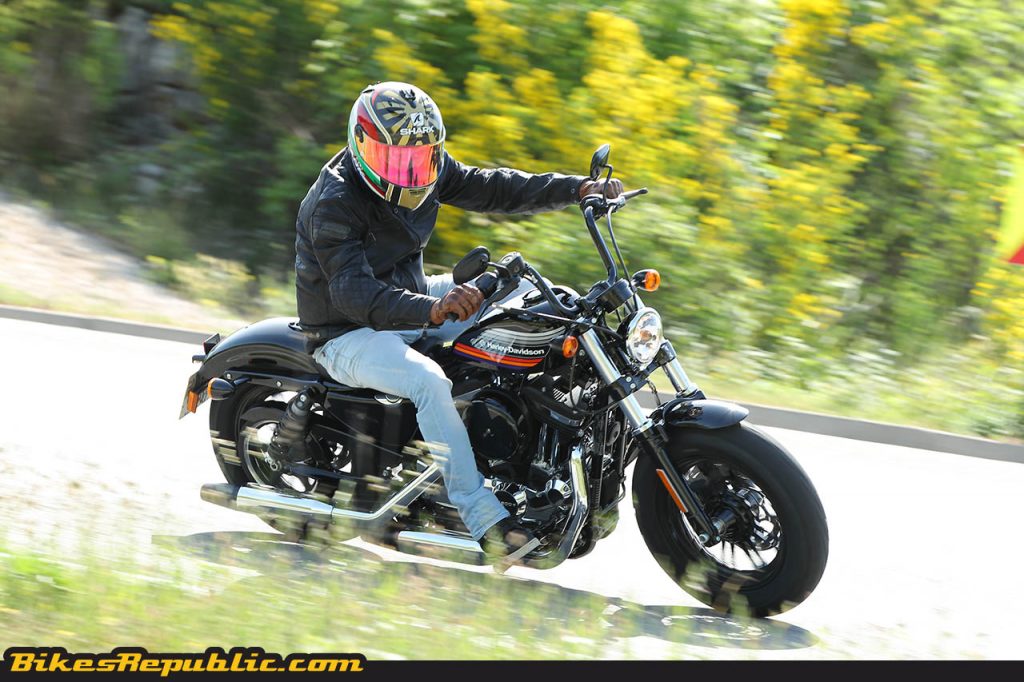 The 48 also comes with the same retro AMF-era paint job which just lends to its classic looks. The two new Sportsters, though visually different, are nearly identical in geometry yet completely unique in character. The 48 Special is obviously the more stylish sibling in the Sportster family.

The 2018 Harley-Davidson Sportster 48 Special is yet to hit the Malaysian market but we hear that may happen towards the later part of the year, and when it does arrive, this is one Sportster that would be worth giving a look at the Harley-Davidson KL showroom at The Gasket Alley in PJ.