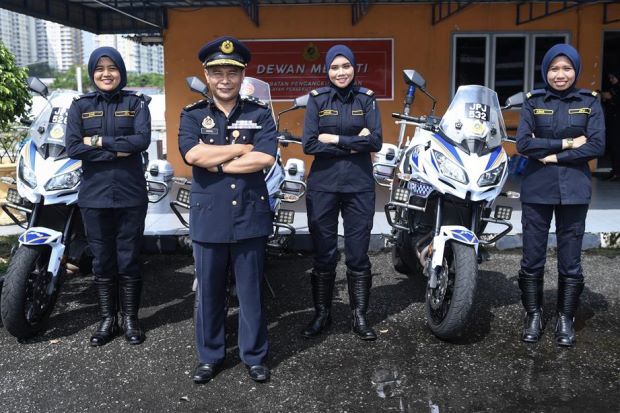 The Kuala Lumpur Road Transport Department (JPJ) has the distinction of being the first to include women in their Motorcycle Enforcement Unit (UPB – Unit Penguatkuasaan Bermotosikal).

The department starts with three women, Wah Moliz Bah, 28; Asma Shafie, 24; Siti Syazwani Hajizin, 27; in the UPB among an all-male force prior to this.

KL JPJ director Datuk Ismail Mohd. Zawawi felt it was time for women to join the UPB and called upon those in their ranks to join the unit.

Wah Moliz took on the director’s call as she had always wanted to ride large capacity bikes.

“The UPB consists of only had men so far, but now the JPJ has opened opportunities for female members to join. It also proves that women are just as competent in operating big bikes,” she told reporters after the 73rd Kuala Lumpur JPJ Day celebrations on Wednesday.

“The courses and training that we underwent were the same as our male counterparts, but the main challenge is the high level of stamina and strength we need because the bikes are heavy,” she said.

On the other hand, Siti Syazwani expressed surprise that she had the opportunity to join the unit.

“The thing that I remember most when I attended the course was when we were asked to lift the Kawasaki Versys 650cc motorcycle that weighs almost 200kg.” (It’s actually more than 200 kg – Ed.)

“We need to know how to lift the motorcycle and if it falls, we have to learn the technique of picking the machine back up. So far, we have been riding our motorcycles to Melaka but there will be more training and courses for us to strengthen and hone our skills,” she said.

Ismail added, “It was an idea that came up early this year and I challenge women to join the UPB because they can do it,” he said.