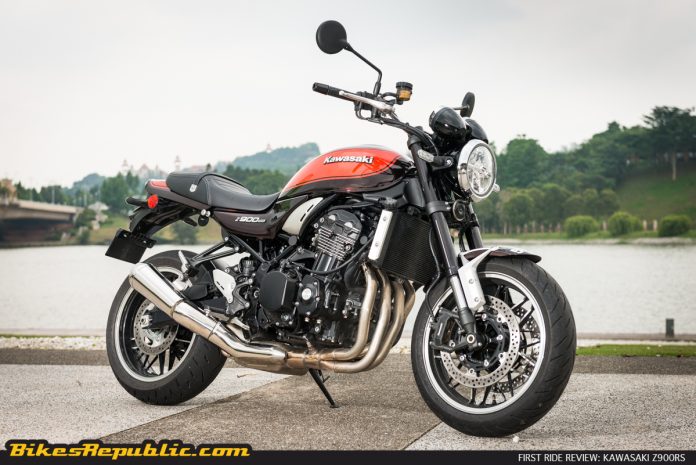 Hot on the heels of the Kawasaki Z900RS’s launch on 27th February 2018, Kawasaki Motor (Malaysia) Sdn. Bhd. (KMMSB) organized a Kawasaki Z900RS Media Ride during these three days. Please click on the link below for our coverage of the launch.

KMMSB started the occasion by taking us through the bike’s concept and specifications. There were a few interesting bits we discovered during this briefing.

For example, the Z900RS Project Leader, Seiji Hagio expressed, “(Our goal was to) Design a retro-naked model that enriches riders’ lives and leaves its imprint to inspire future generations to dream.” It may be a little difficult to paint a picture of his statement, but that direction was incorporated into Kawasaki’s TVC for the bike.

The entire Z900RS is full of references to that legendary 1972 Kawasaki Z1, which was the first Japanese large capacity four-cylinder production motorcycle that featured dual overhead camshafts (DOHC). The Z1 was incidentally a 900cc bike too and that monster engine of its time took it to 210 km/h. Some may scoff at this figure these days, but do bear in mind that motorcycles had skinny bias ply tyres, dual rear shocks, frames that resembled small gauge water pipes, non-floating brakes and, what ABS? The Z1 was the fastest production motorcycle when it was introduced. (Read more about the Z1 in the link below for our feature on classic Kawasakis.)

The front forks of the Z900RS are fully adjustable, while the cantilevered rear shock is adjustable for preload and rebound damping. 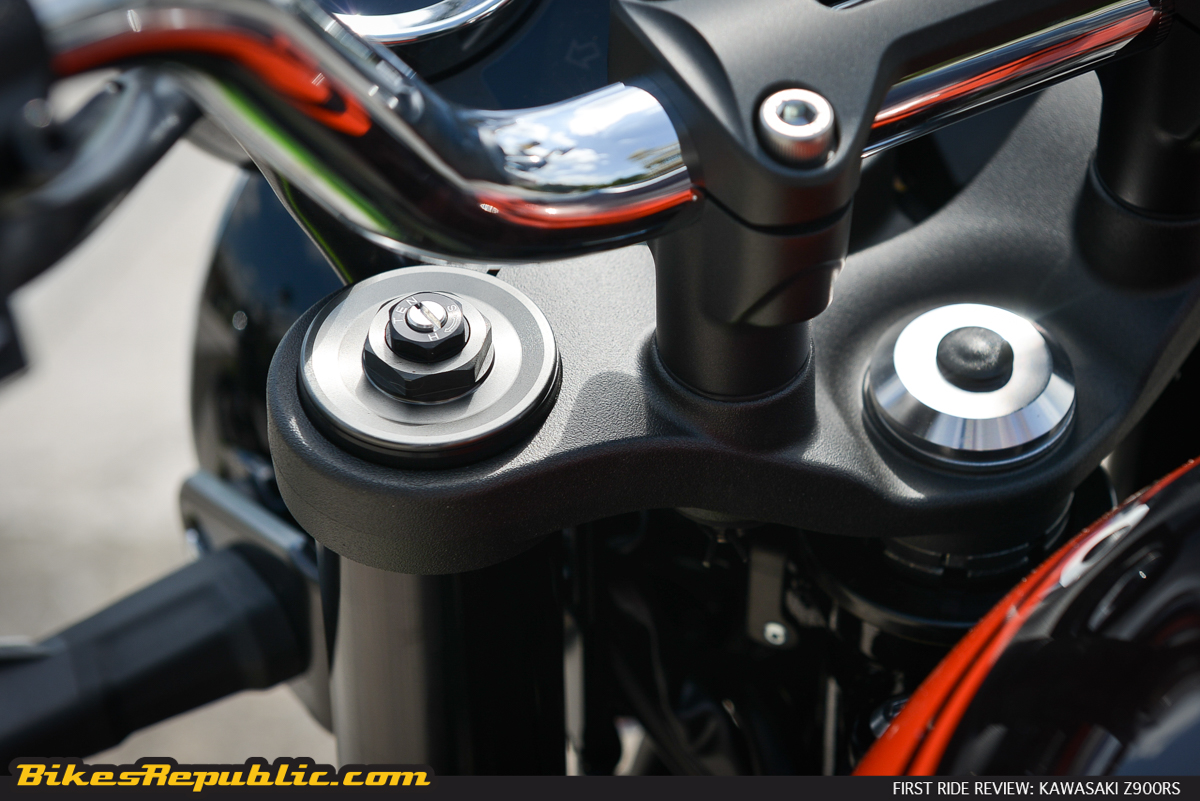 Many design cues of the Z1 were brought over to the Z900RS, including the teardrop-shaped fuel tank, duck-bill tail section, dual gauge nacelles, headlamp and taillamp, cooling fins on the engine cylinders, clutch and alternator cases, so forth. Even the font in those round analog gauges are of the same type font and size as the Z1’s. 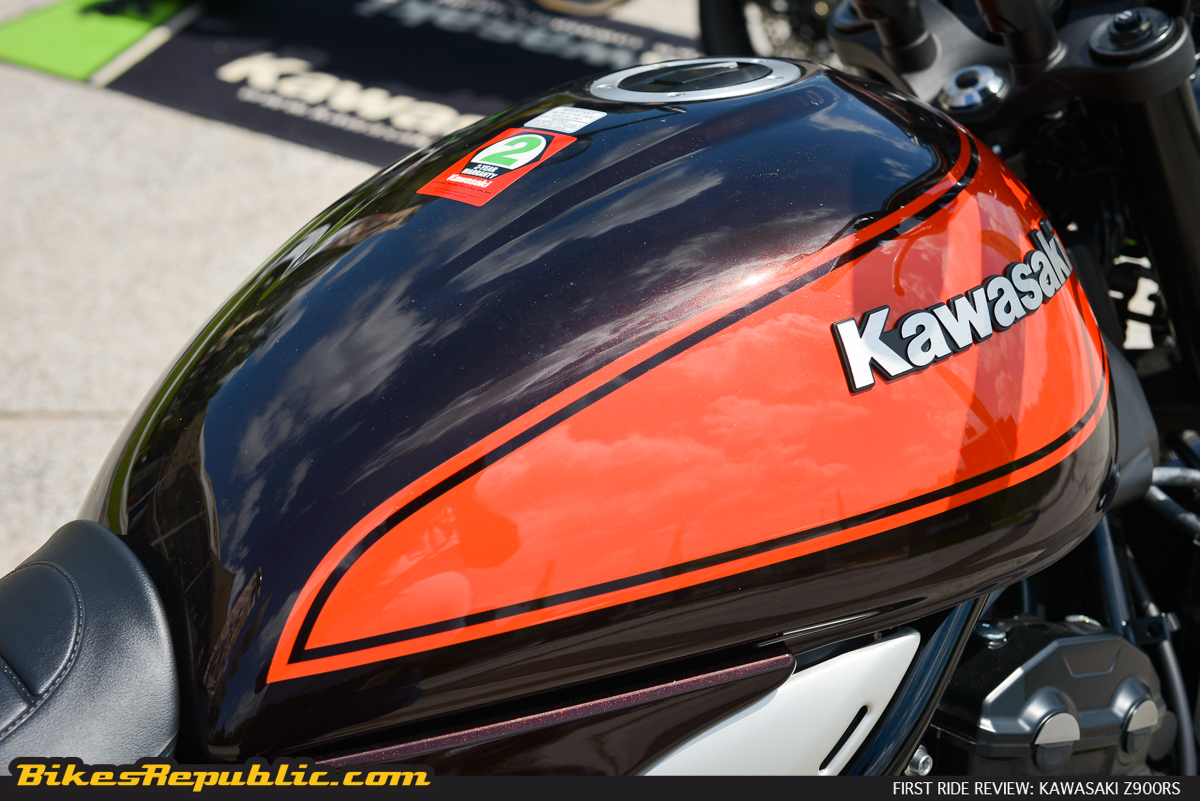 But the Z900RS is modern through and through with accoutrements such as two mode K-TRC traction control, ABS and four-piston Monobloc front brakes. 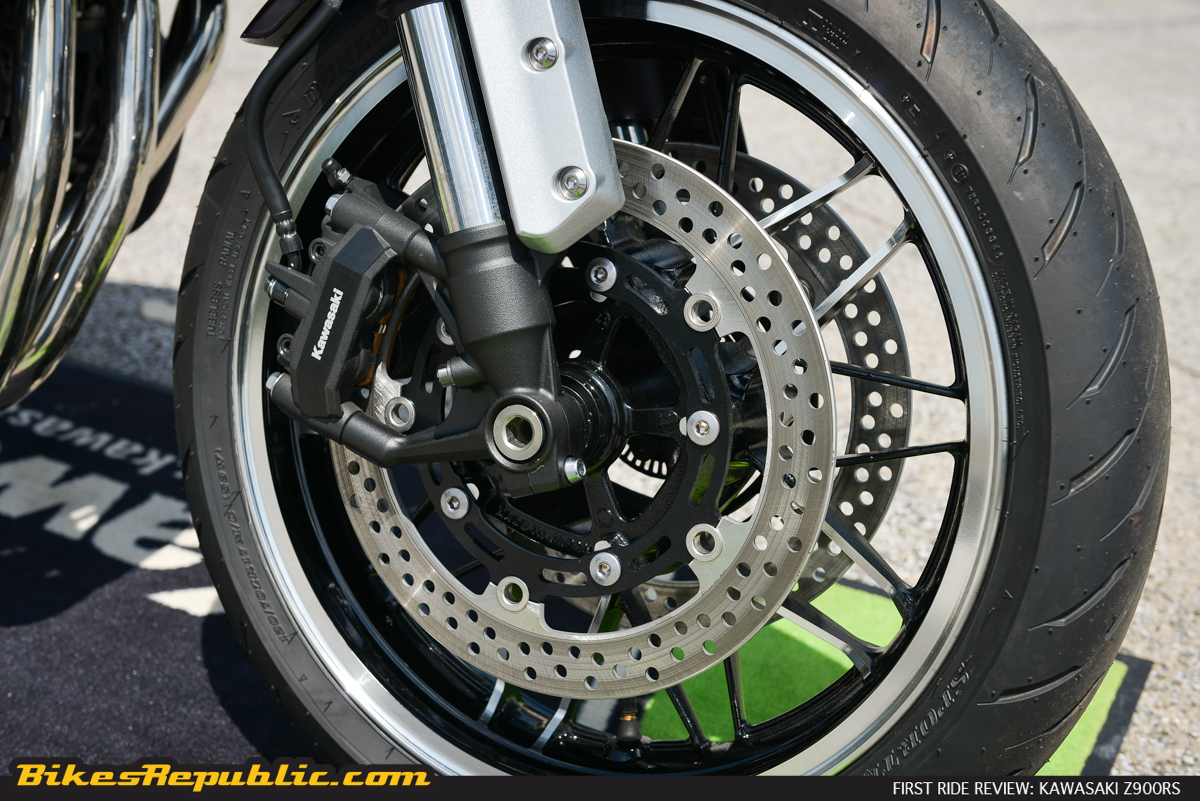 Although the 948cc, liquid-cooled, 16-valve, inline-Four engine was derived directly from the Z900 naked sportbike, the Z900RS’s engine has a different head design, which lowered its compression ratio. The gearbox ratios are identical from 2nd to 5th gears, but 1st is shorter while 6th is longer on the Z900RS. The longer ratio is good for comfortable cruising and better fuel economy. The changes on the bike was to produce more midrange torque as opposed to all-out horsepower. 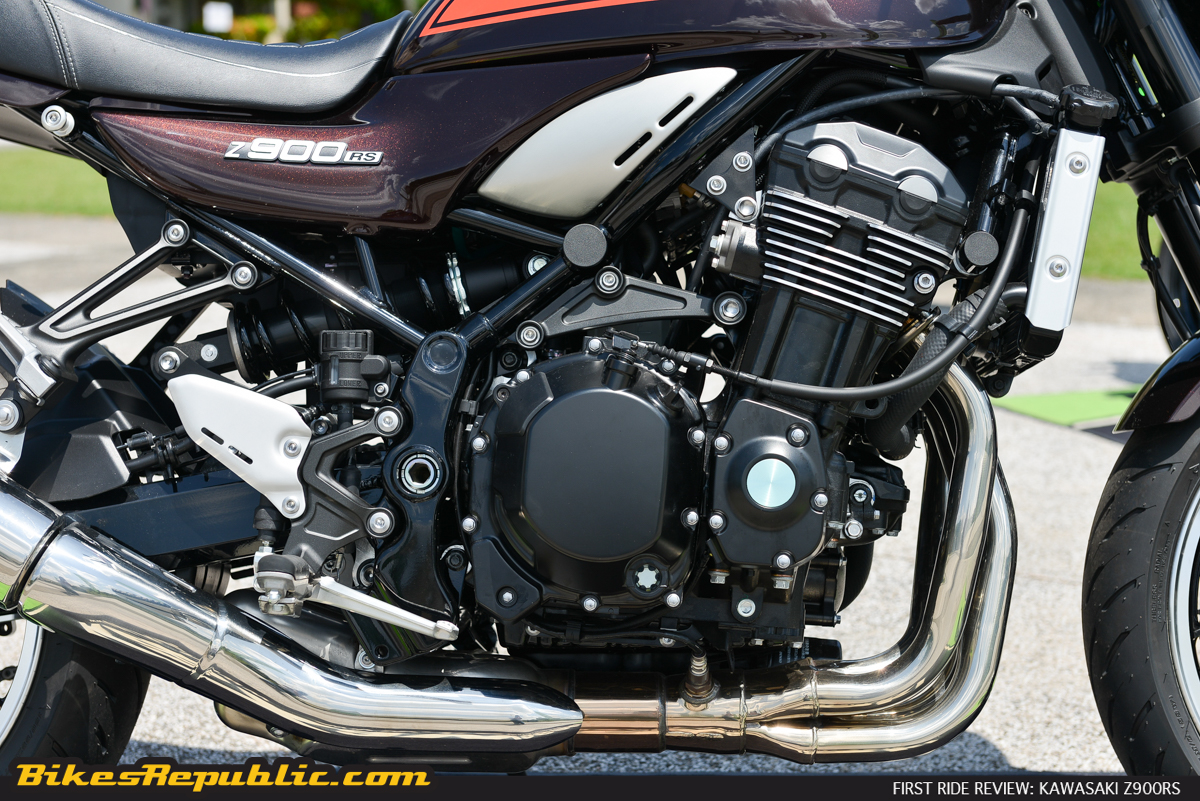 KMMSB had prepared four bikes per each session: Two each of the orange/brown Special Edition and matte green Standard models.

The exhaust note was lively enough. Kawasaki was quick to point out that the sound had been tuned – probably to sound like the Z1. The Z900RS’s stock 4-in-1 exhaust system sounded loud enough. Aesthetically, the downtube and canister had the same sweep angle as the Z1’s, although the Z1 had 4-into-2-into-4 megaphones. Wish the Z900RS had those four pipes but they were probably omitted to save weight and cost. But hey, who knows if the aftermarket has something available. 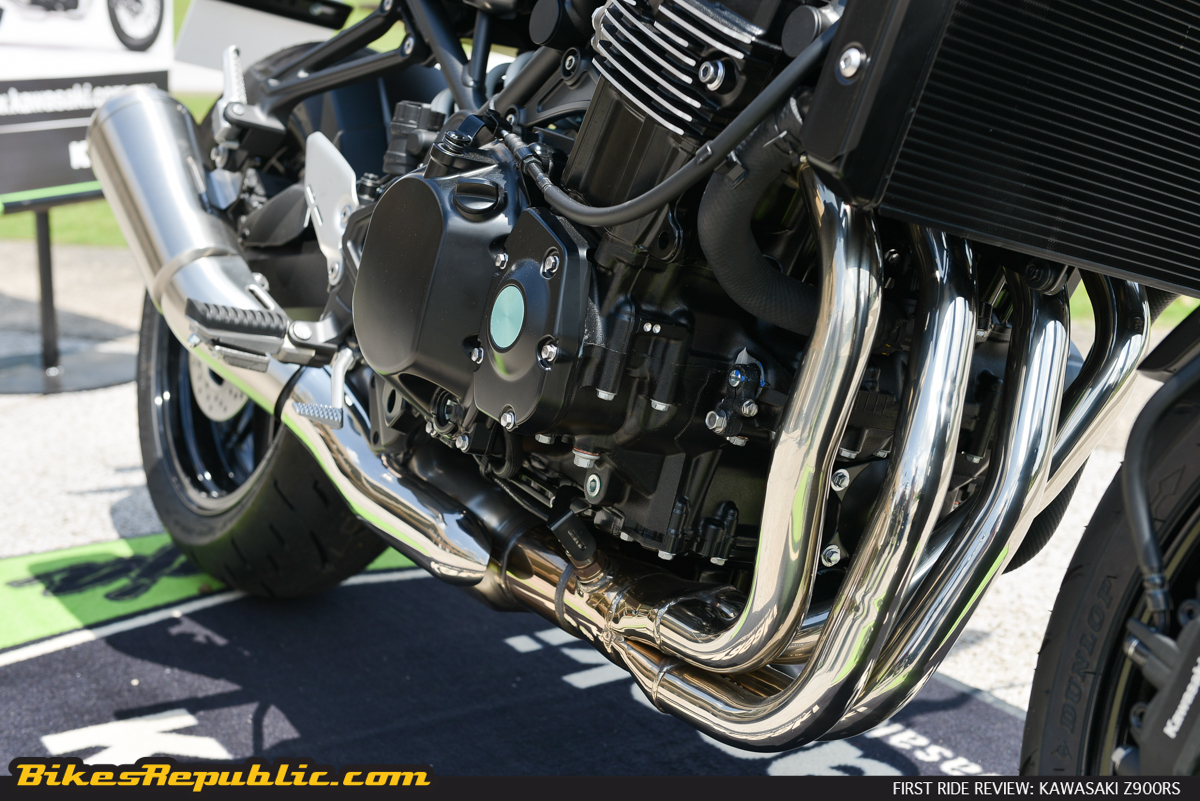 KMMSB had equipped the Z900RS with a lowered seat for an 800mm seat height for the Malaysian market (stock is 835mm). The stock seat is available as an option. 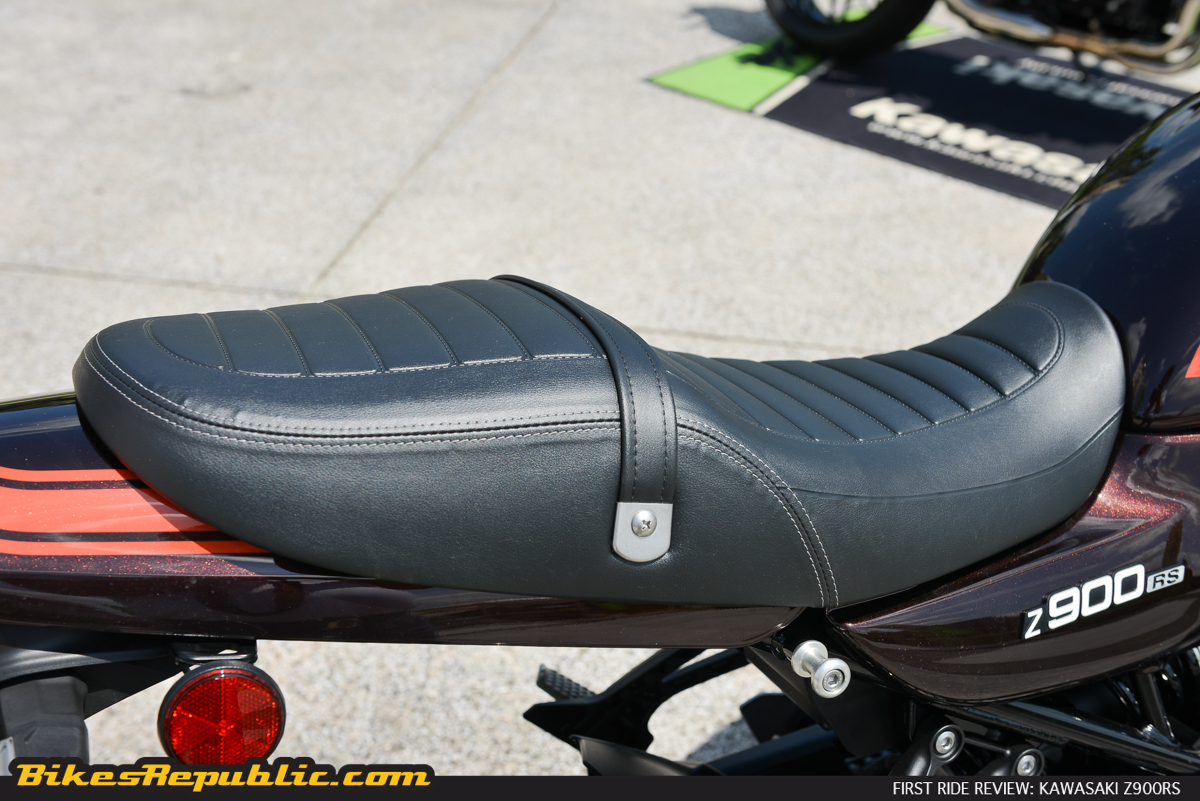 Lifting the bike up off its sidestand and pushing it around revealed how light it felt, despite looking hefty at 214 kg dry in the spec sheets. The low seat height also helped matters.

It felt even lighter when we started riding. The engine’s torque was right in our faces as the bike kept raring to go and prompted us to use higher gears for slow speed cruising around Putrajaya. The high torque caused the bike to surge and the throttle was a little snatchy when first cracked open. It took a lot of concentration to modulate the throttle with more finesse, initially. 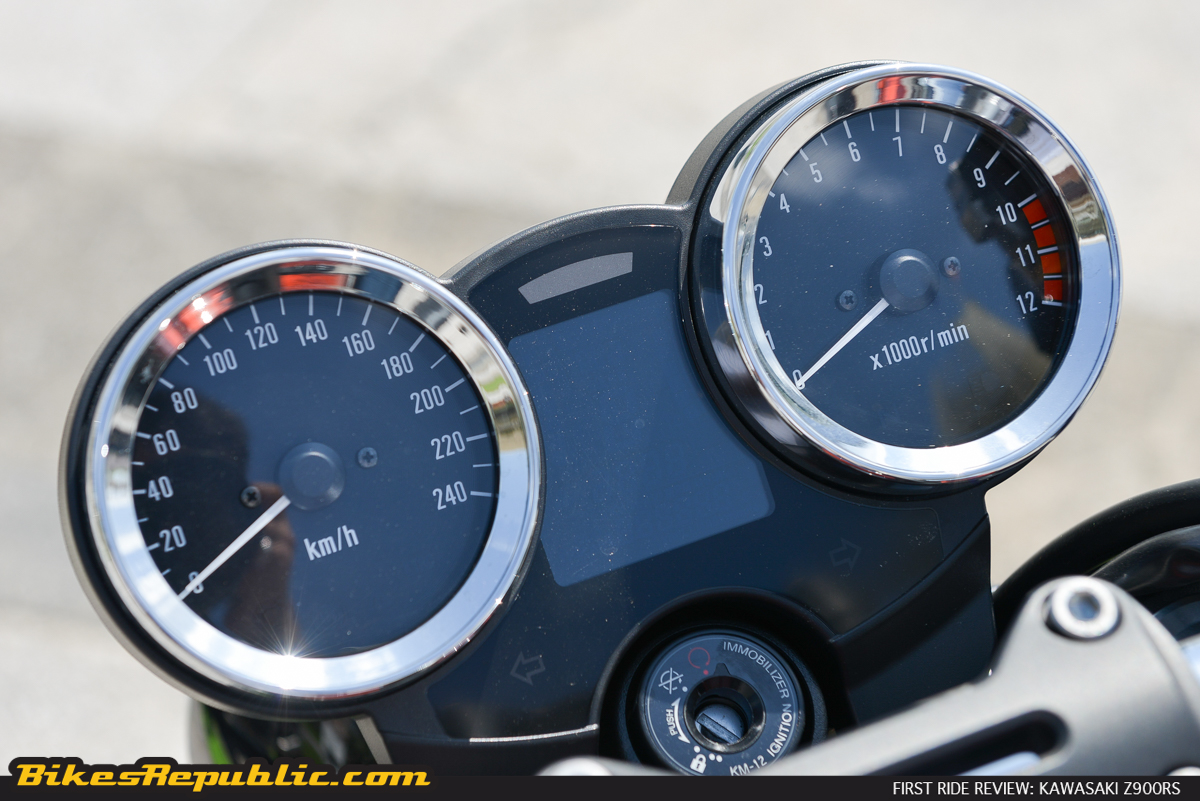 The good news was, all that torque meant you could afford to be lazy with the bike. A little less than 2000 RPM in sixth gear produced 60 km/h.

We rode from the Putrajaya Lake Club first to the gates Prime Minister’s office, from one red light to another, and slow corners. The Z900RS was remarkably agile and felt like a much smaller bike. But it would just take off as soon as you gave it some throttle. 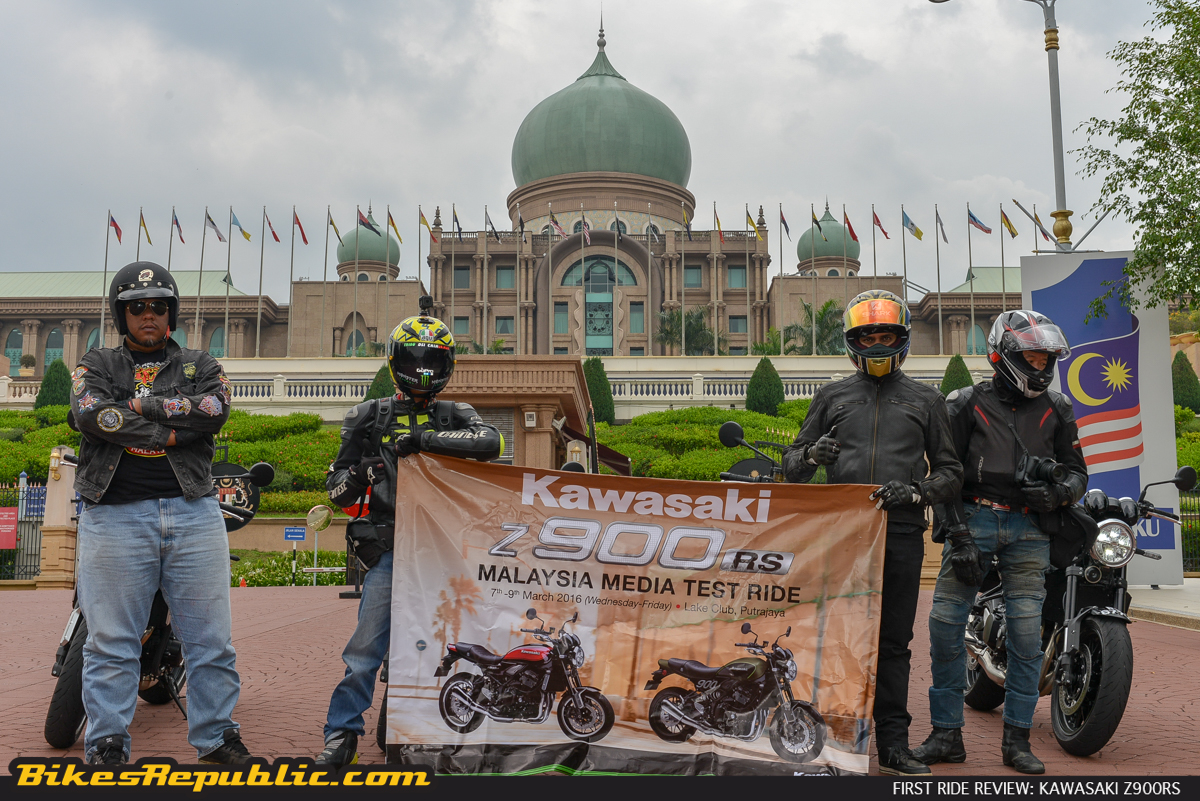 From there it was to the Palace of Justice for another photoshoot before a brisk highway blast. 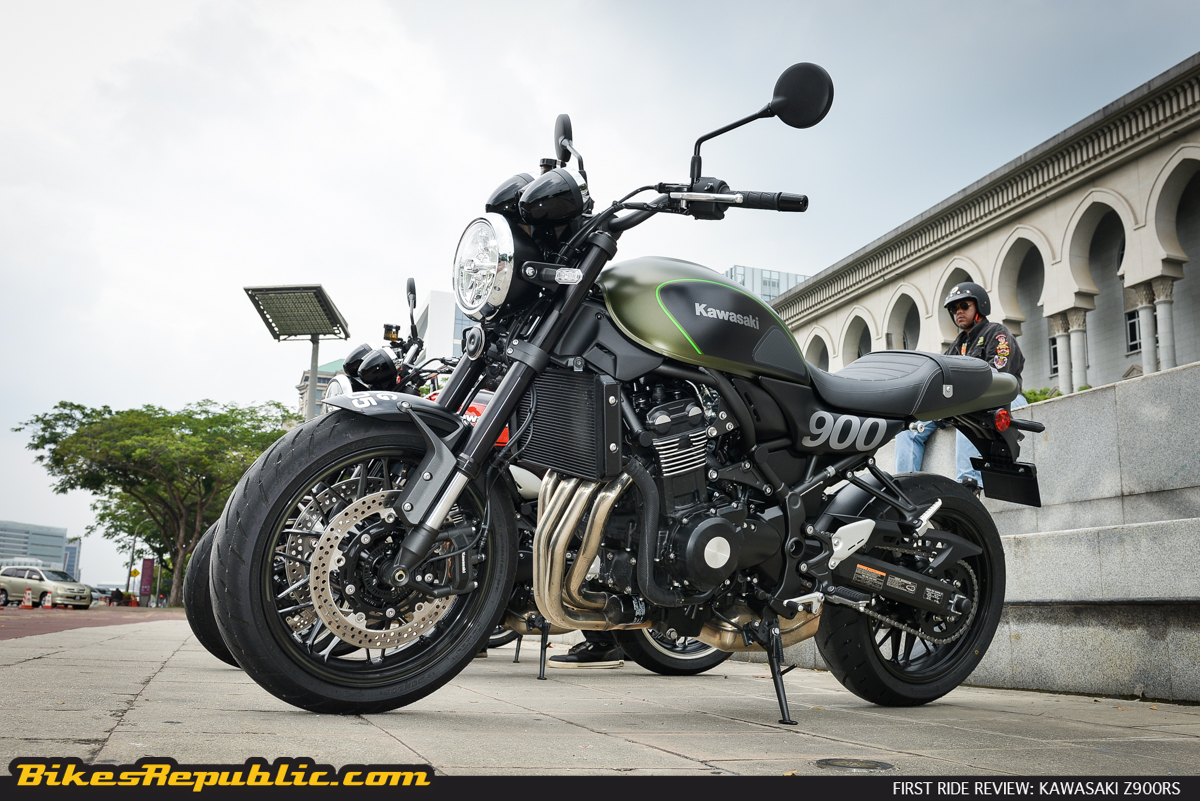 The chassis was composed during that high-speed run, but the forks’ standard settings had too much compression damping in them and they hopped over bumps. They would work fine on smooth roads, but some twiddling with the settings should sort them out. The rear shock didn’t pogo up and down when pressed through long corners but just as the forks, big bumps were transferred directly to the rider. 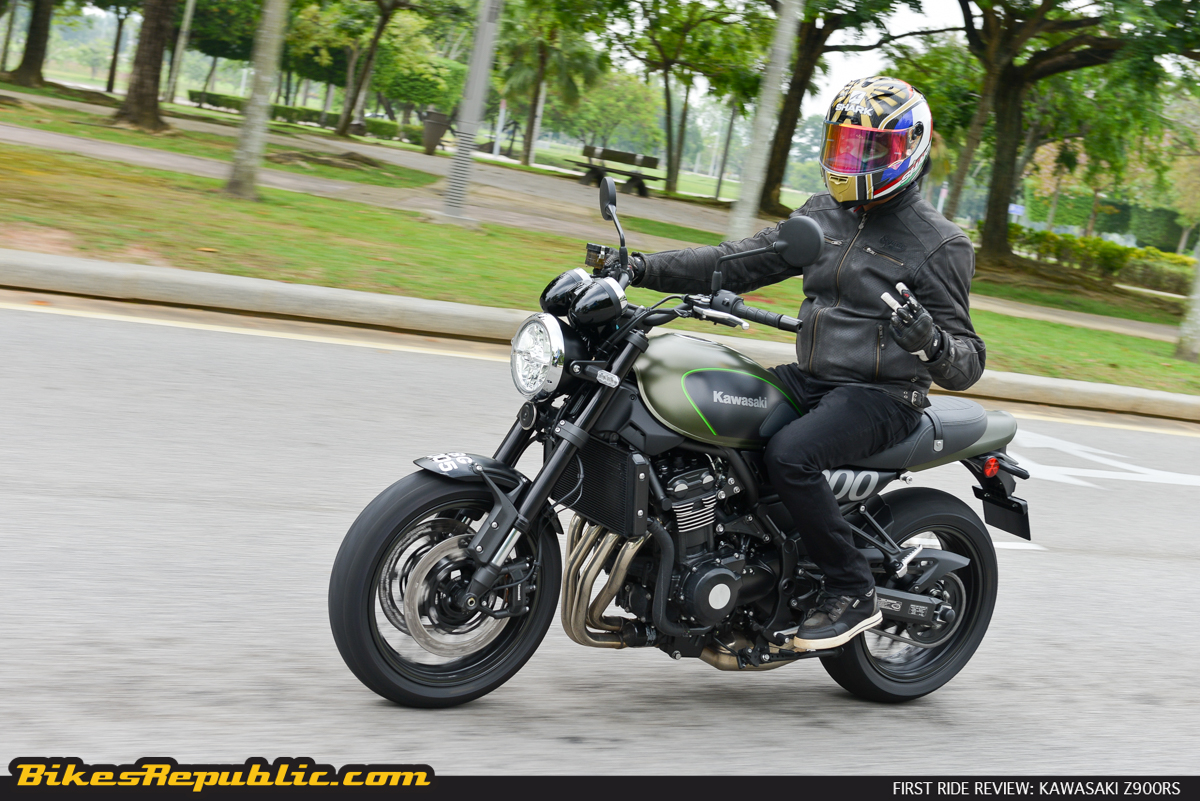 If there’s one aspect I’d wish Kawasaki improve on the Z900RS were the “simple switchgear,” to give the bike completely premium feel. Anyway, it’s a personal thought as the switchgear didn’t impede on the bike’s performance. 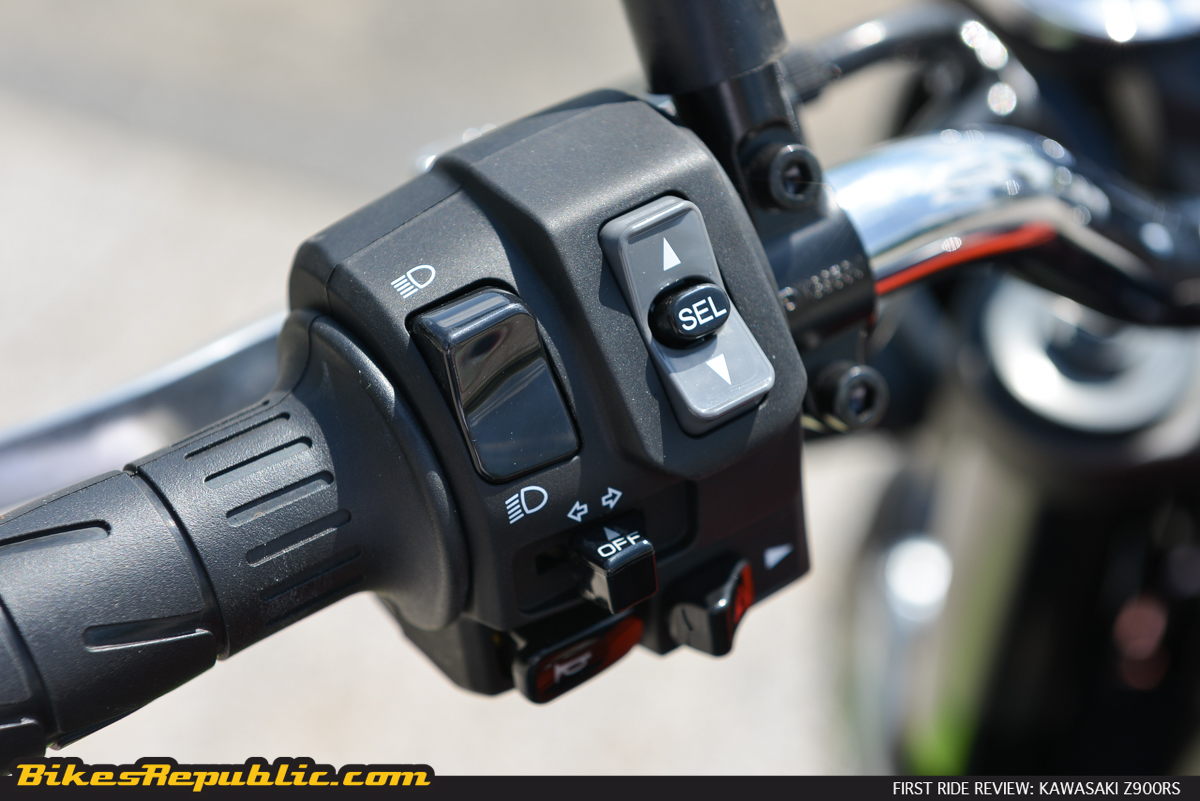 The Kawasaki Z900RS is a good bike overall, from our brief ride. Stay tuned for the full review. 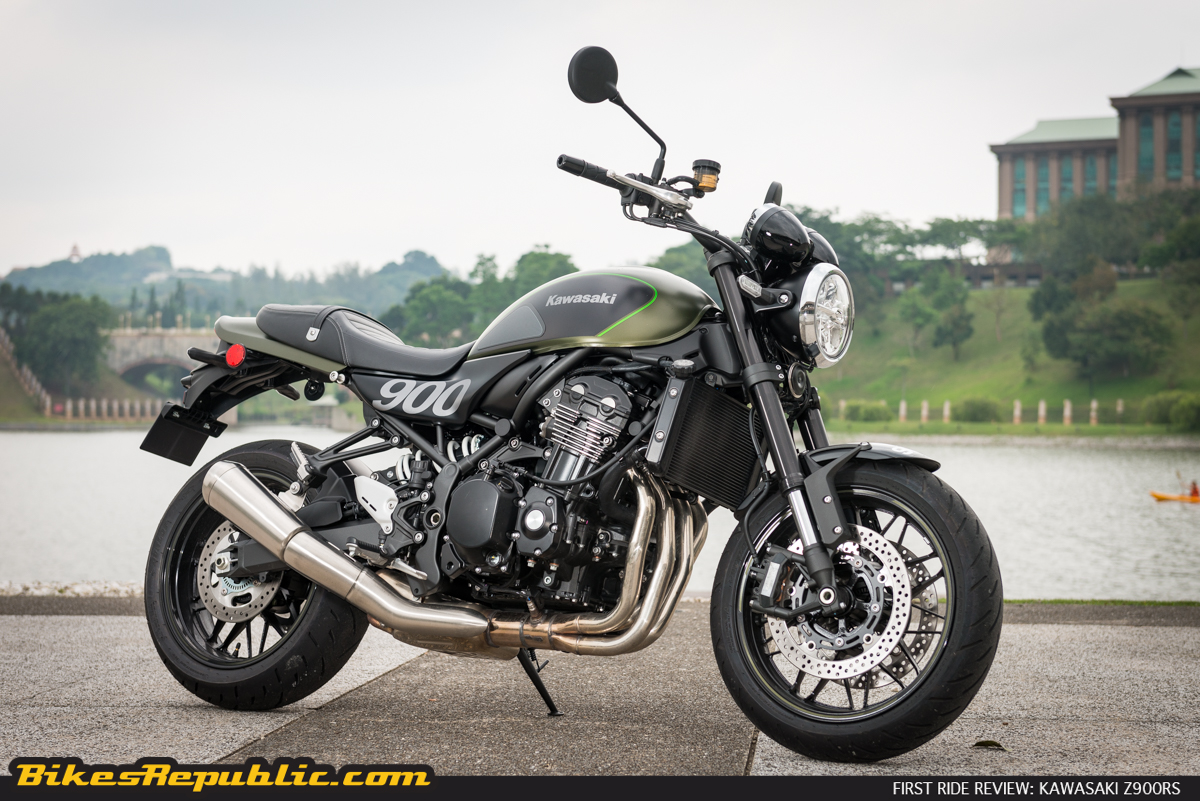