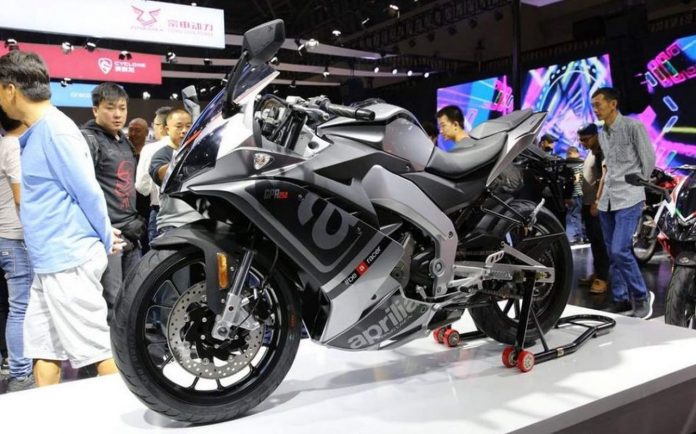 Somewhat unexpected, the Aprilia GPR 250 was unveiled in China rather than in the traditional European markets first.

Aprilia has a long history with 250cc sportbikes, harking back to the glory days of the 2-stroke RS250 for the road. The bike capitalized on their outstanding success in the world 250cc GP in the hands of riders such as Tetsuya Harada, Loris Capirossi, Max Biaggi and one upstart by the name of Valentino Rossi.

However, their attention seemed to have shifted since they built the 1000cc Mille superbike, which culminated in the 1000cc RSV4 and finally the most recent RSV4 1100. Aprilia’s current MotoGP effort lends further weight to the RSV4.

But apparently Aprilia had not given up on lightweight sportbikes. They debuted the RS660 concept at EICMA last year and now this, the GPR 250.

One look and it’s apparent that it’s influenced by the RSV4 in many respects: The twin headlamps, swoopy bodywork, large twin-spar aluminium frame.

The 249.2cc, liquid-cooled, single-cylinder, four-stroke engine is claimed to produce 26.5hp and 22Nm of torque. The manufacturer claims a 150kg weight.

That power is on par with other 250cc single-cylinder sportbikes such as the Honda CBR250R, KTM RC 250 and TVS Apache RR 310. By comparison, two-cylinder machines such as the Kawasaki Ninja 250 and Yamaha YZF-R25 produce in the regions of 39hp and 36hp, respectively.

The Aprilia GPR 250 is slated for the Indian market soon. We wonder if it’ll ever come into Malaysia.