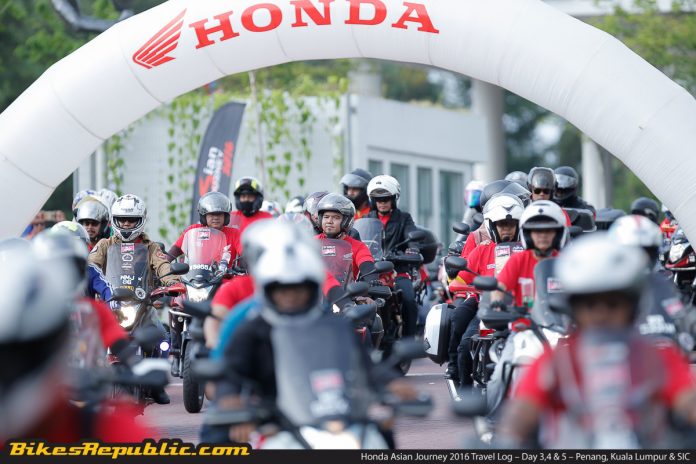 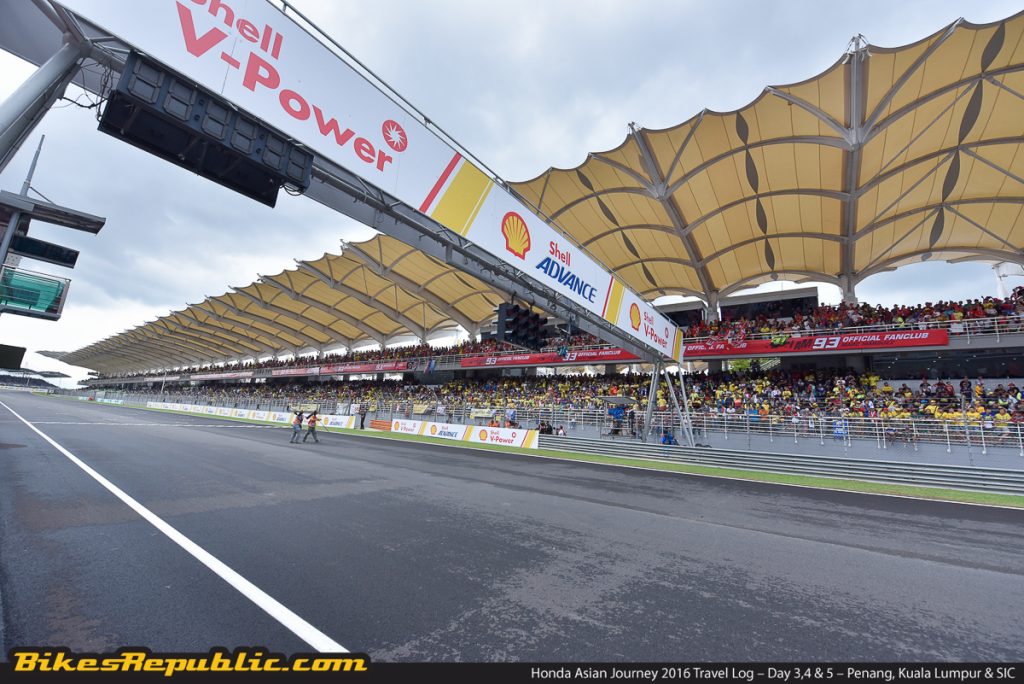 It’s been a fruitful week for us at BikesRepublic whilst we charted our journey in the inaugural Honda Asian Journey Ride 2016 to the 2016 Shell Malaysia MotoGP race weekend in Sepang.

The action-packed schedule plus the temperamental weather meant that we succumbed to a mild sickness, explaining the delayed logs from Day 3,4 and 5 of the ride. Nevertheless, we strive to report to you on what went down, and here’s the gist of it. 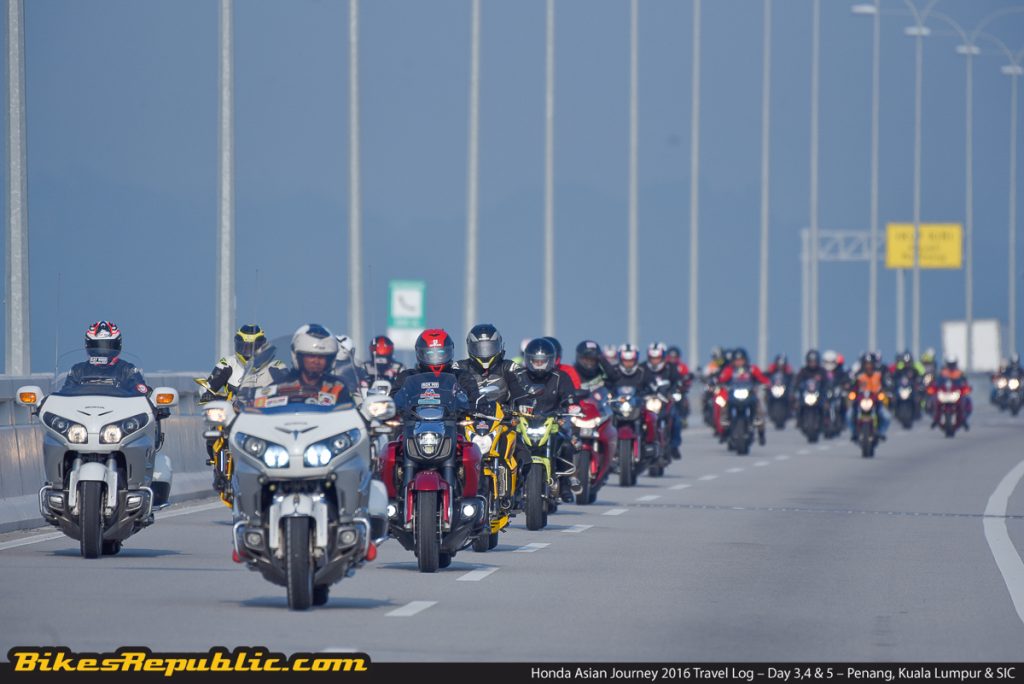 Day 3 – Malaysian flavour in racing and touring weather
Having completed the journey into Penang from Sadao, Thailand, the next agenda planned by hosts Boon Siew Honda Sdn Bhd was a quick visit to its main plant in Batu Kawan, Penang on Friday morning.

The Malaysian firm opted to give visiting riders in the ride hailing from other parts of Asia a uniquely Malaysian taste of motorsports before we proceeded to Kuala Lumpur. To that, Boon Siew Honda spared no efforts in organising a mini Malaysian Cub Prix showcase for the riders. 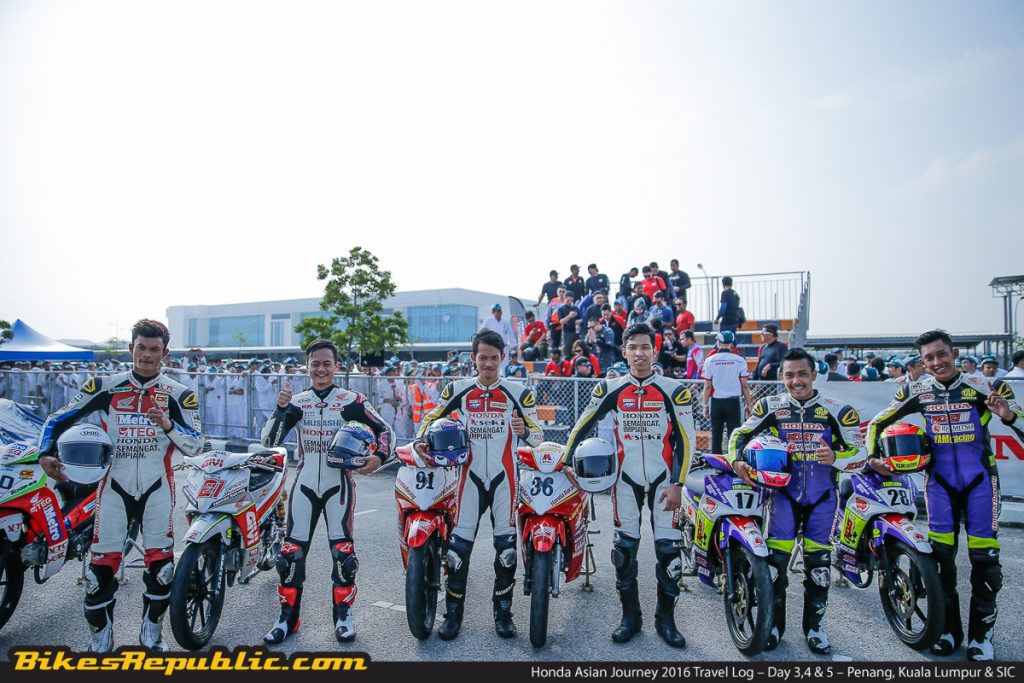 Leading the bill of here were top stars like Zaqhwan Zaidi and Shafiq Ezzariq. The former also races for Boon Siew Honda in the Asian Road Racing Championship while the latter is a former Moto3 rider from the Asia Talent Cup series and is the top favourite to clinch this year’s Wira class title. 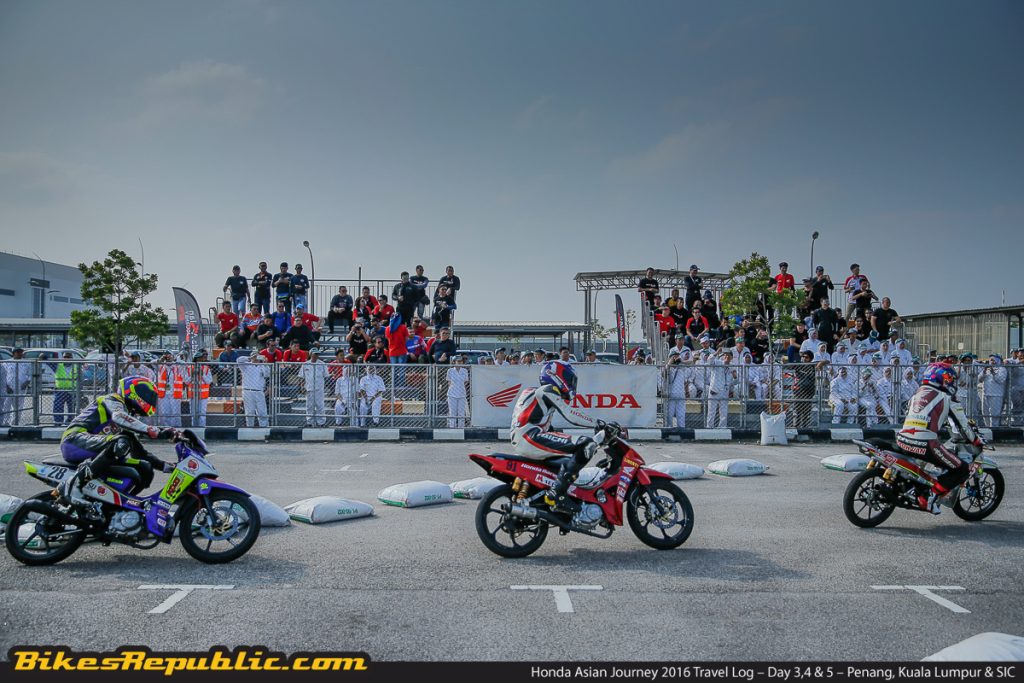 Together with four other riders under the Boon Siew Honda Cub Prix program, all six riders showed what the Malaysian-flavoured underbone racing was really like – nail-bitingly close and action-packed. 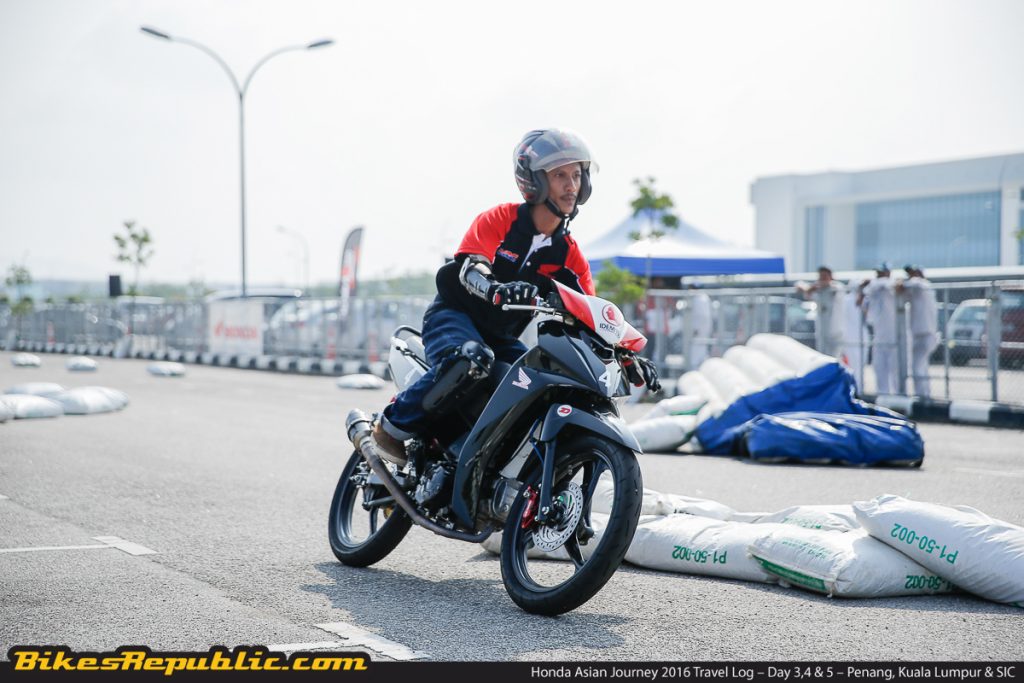 And the showcase wasn’t just limited to a mere demonstration too as Boon Siew Honda prepared a volley of if Honda Wave Alpha 110CV race bikes from its one-make series for participants to try out with. All six riders also lent a hand in guiding participants on how to master said machine around the mini course. 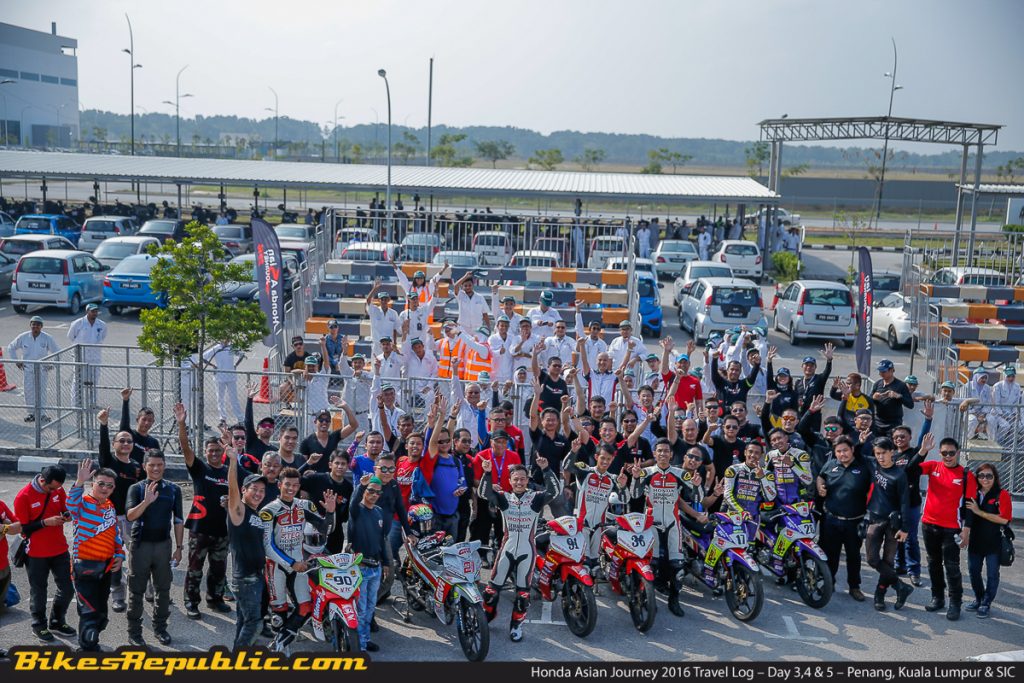 Once the morning’s racy affair ended, it was back into the hot seat to continue our 330km-long journey to wards the Pullman City Centre Hotel in the heart of Kuala Lumpur city. After a quick lunch and prayer stop in Tapah R&R, riders then got to taste another uniquely Malaysian element – the weather. 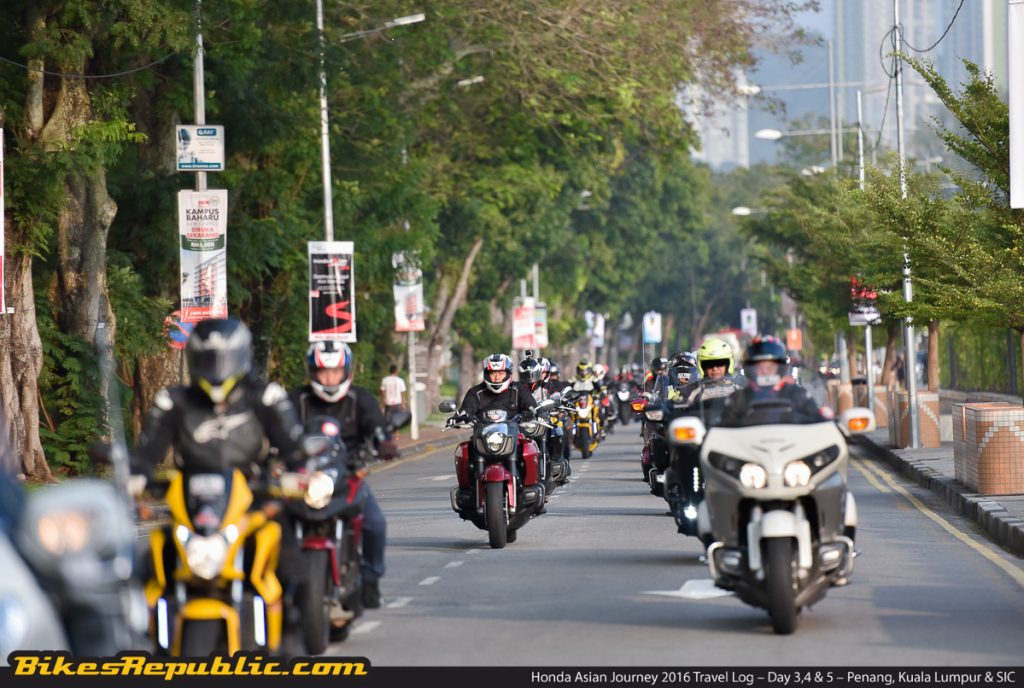 If anything, the late afternoon thunderstorm that broke open on late Friday afternoon was a sign of things to come in the Sepang International Circuit (SIC) for the 2016 Shell Malaysian MotoGP qualifying and race sessions. 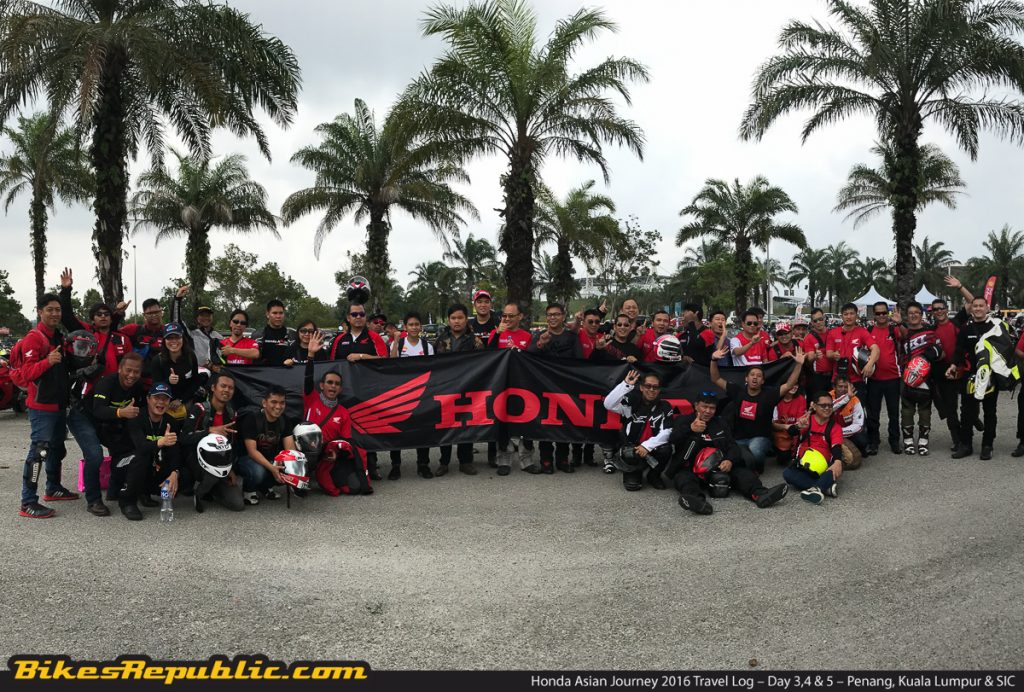 Day 4 – Buzzing in Sepang
It wasn’t until Day 4 that the Honda Asian Journey 2016 ride finally reached its main destination, which was SIC. The convoy ride from Kuala Lumpur to the circuit was relatively straightforward. Much of this was the result of Boon Siew Honda taking the extra effort at organising an official police escort and outriders. 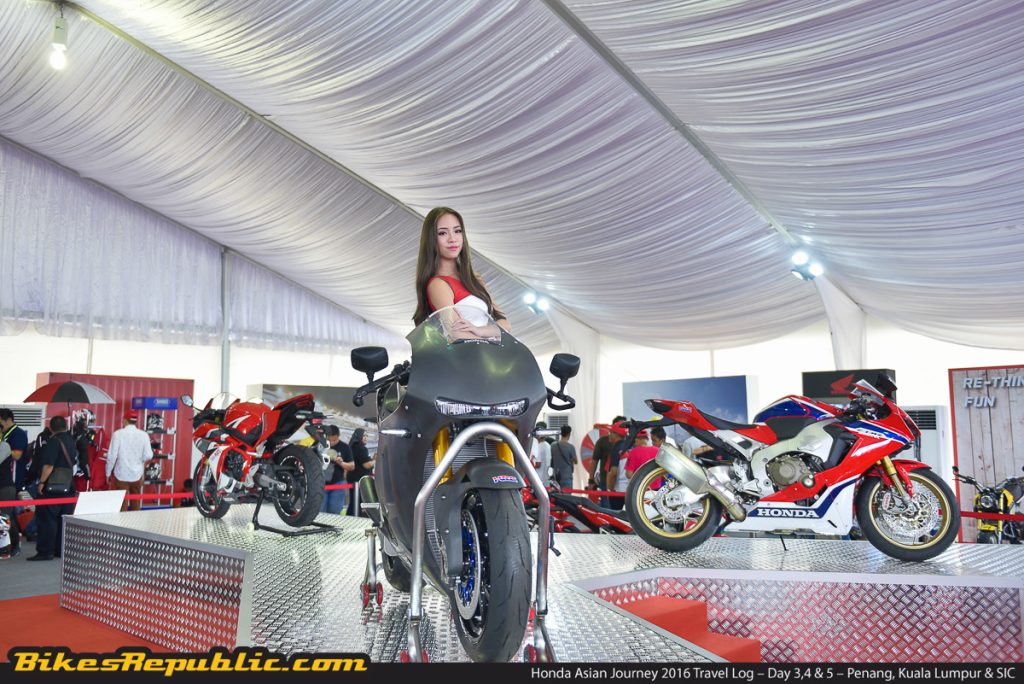 Once in the circuit, participants were then given free roam in the circuit’s Mall Area for the Mega MotoGP Carnival. Housing a total of 80 booths, it became quite the bikers’ shopping haven. More importantly, Boon Siew Honda’s very own booth took centre stage here with a display of tasty machinery. 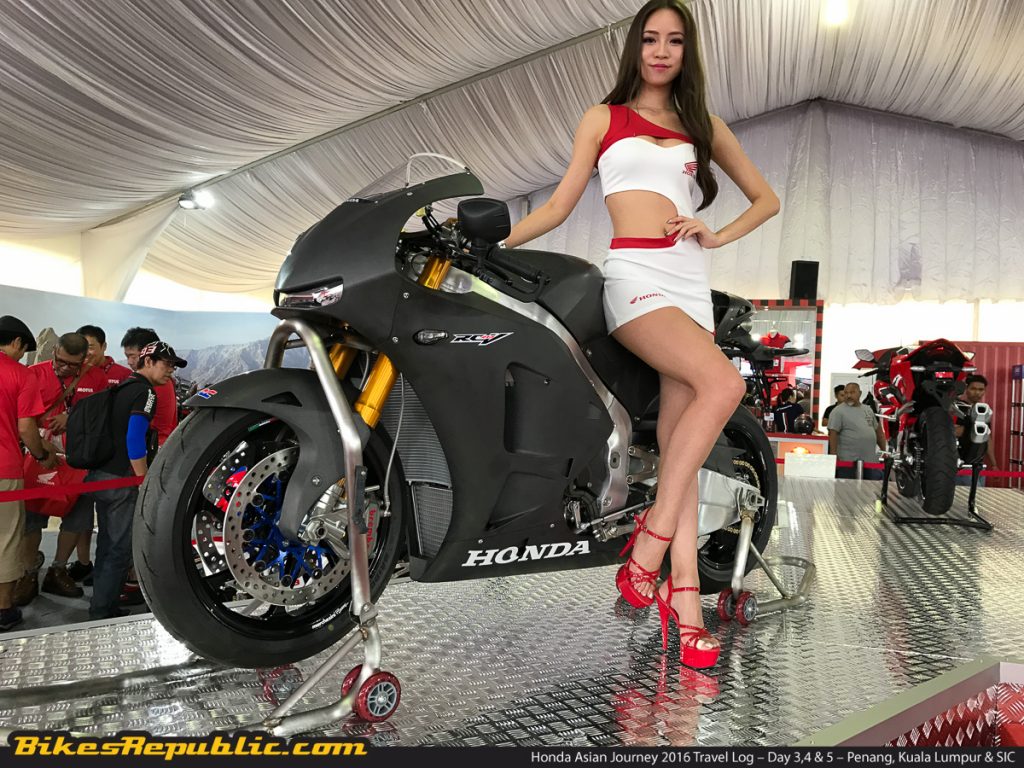 Boon Siew Honda had plenty of big bikes and special models on display, with all this concentrated coinciding with the Honda Asian Journey 2016 ride. Highlights here include a display of the new CBR1000RR SP Fireblade, the new CBR250RR and a blacked-out version of the Honda RC213V-S street-legal GP replica.

Besides that, Boon Siew Honda also had a display of Honda’s adventure and enduro models like the CRF1000L Africa Twin and the face-lifted CB500X. There was also a section dedicated to the upcoming MSX-125 (aka Grom) featuring a number of customised versions being displayed. 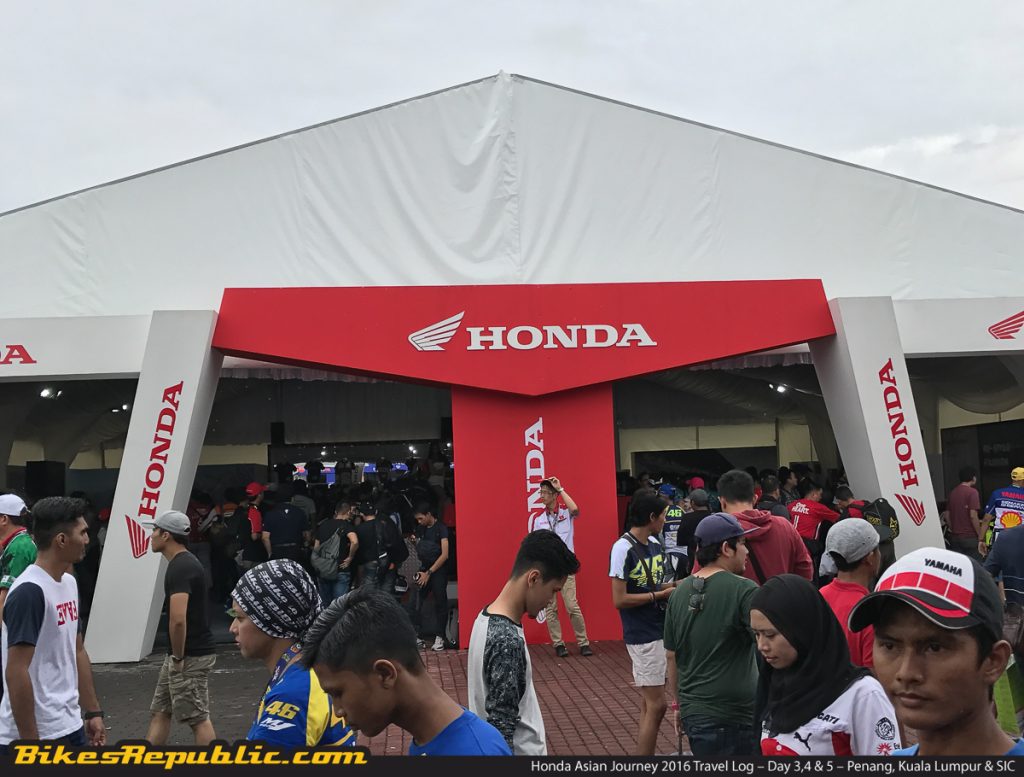 Clearly, this was a two-pronged attack for Boon Siew Honda. First of which aligned itself with the Honda Asian Journey 2016 main mission of painting a new image for Honda and its big capacity line up, with the second mission here aimed at enticing local consumers with the marque’s ‘Big Wing’ brand concept. 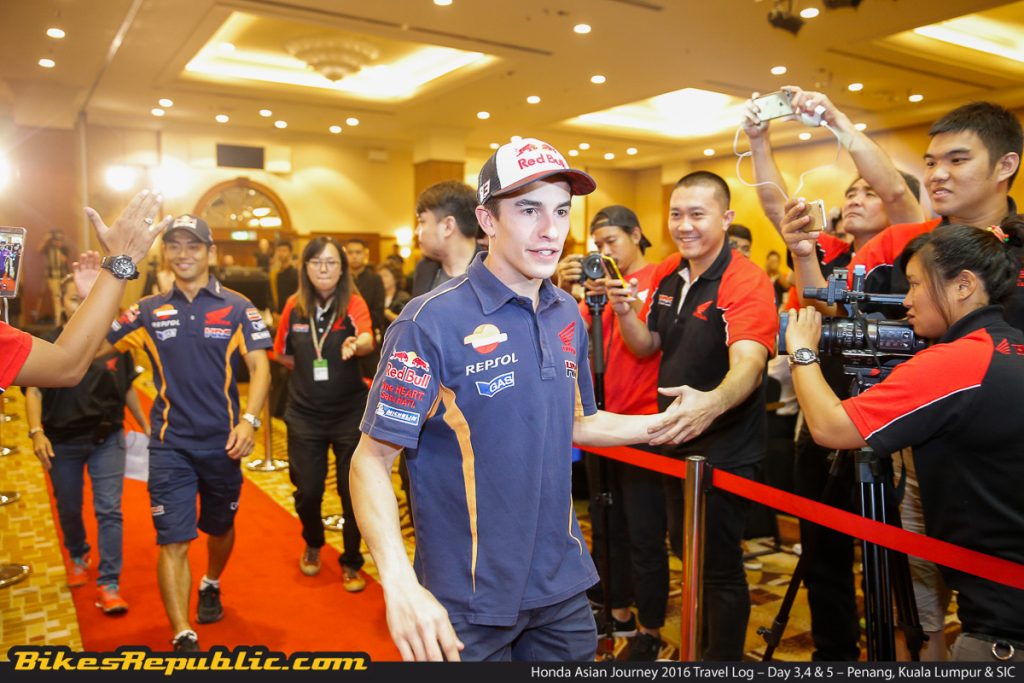 After catching the wet qualifying session, it was yet another ride out towards Putrajaya for the evening’s program later in Sama Sama Hotel, KLIA. A special meet and greet session with Repsol Honda riders Marc Marquez and Hiroshi Aoyama was held, giving lucky consumers taking part in this ride the once in a lifetime chance to meet with newly crowned world champion Marquez. 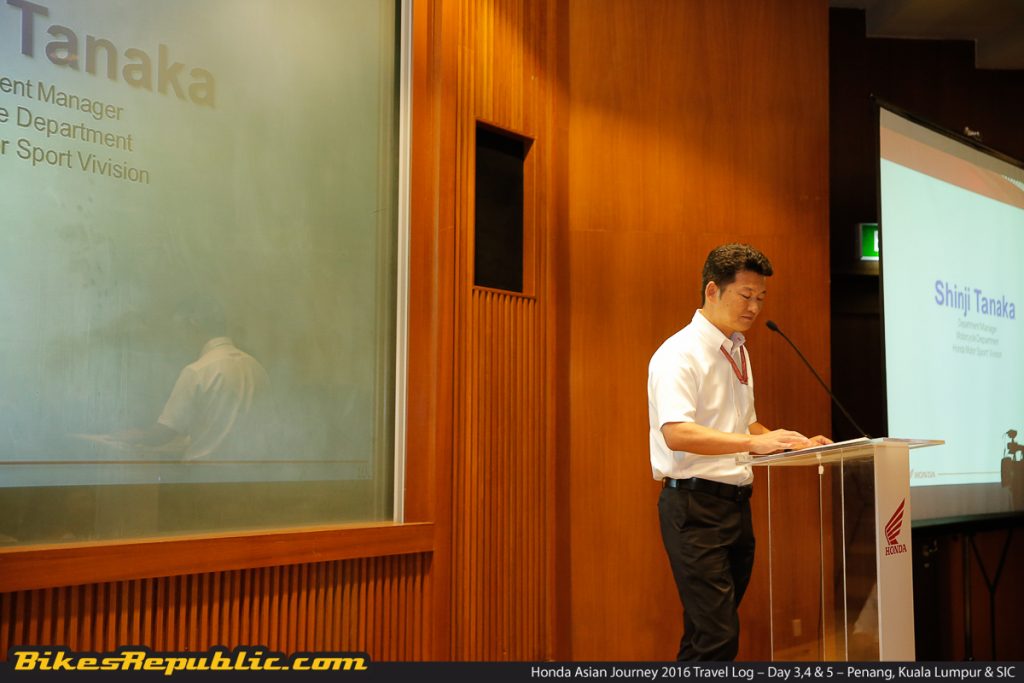 For the bulk of the journalists taking part in this ride though (us included), it was the Honda Racing in Asia regional press conference that took up our full attention. Together with Boon Siew Honda and new partners Sepang International Circuit, several interesting announcements were made here in regards to developing racing talents from the region.

Also present here were some of Honda’s top Asian riders including national rider Khairul Idham Pawi from Moto3 plus Moto2 riders Takaaki Nakagami and Thailand’s very own Ratthapark Wilairot. Honda’s regional execs gave us a detailed run through of the new plan, and we’ll have this for you in a separate special report very soon. 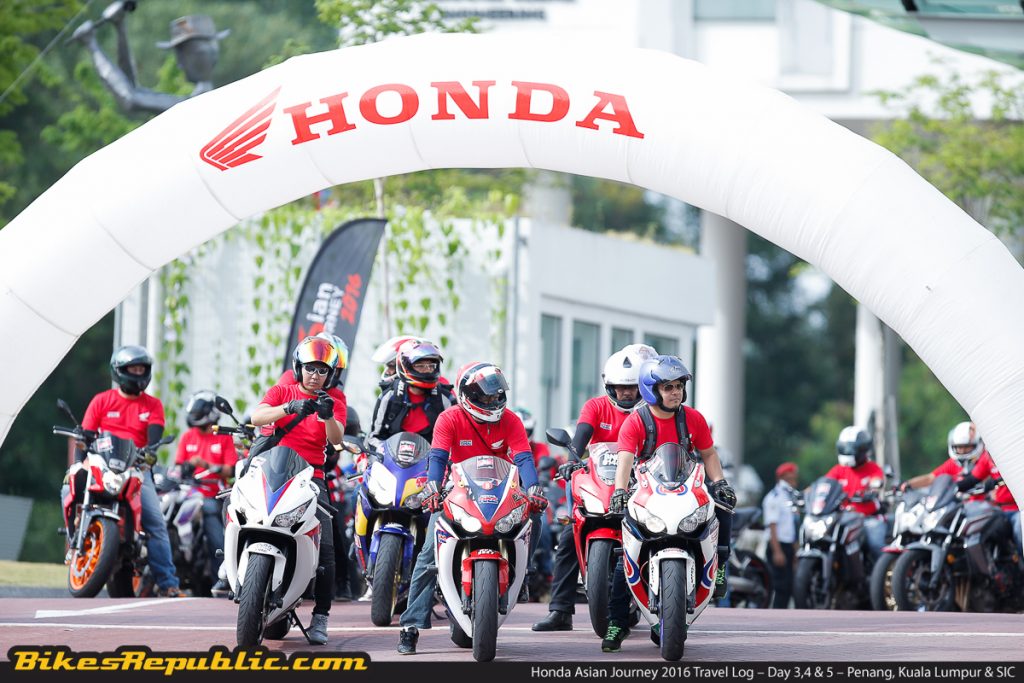 Day 5 – One last ride to Sepang
The fifth and final day of the Honda Asian Journey 2016 ride culminated with one more massive group ride to the circuit. This time, the international participants linked up with a number of local Honda bike clubs such as the CB650F Club, CBR-RR Malaysia and the RS150R Owners Club for a controlled massive convoy to the circuit to catch the race. 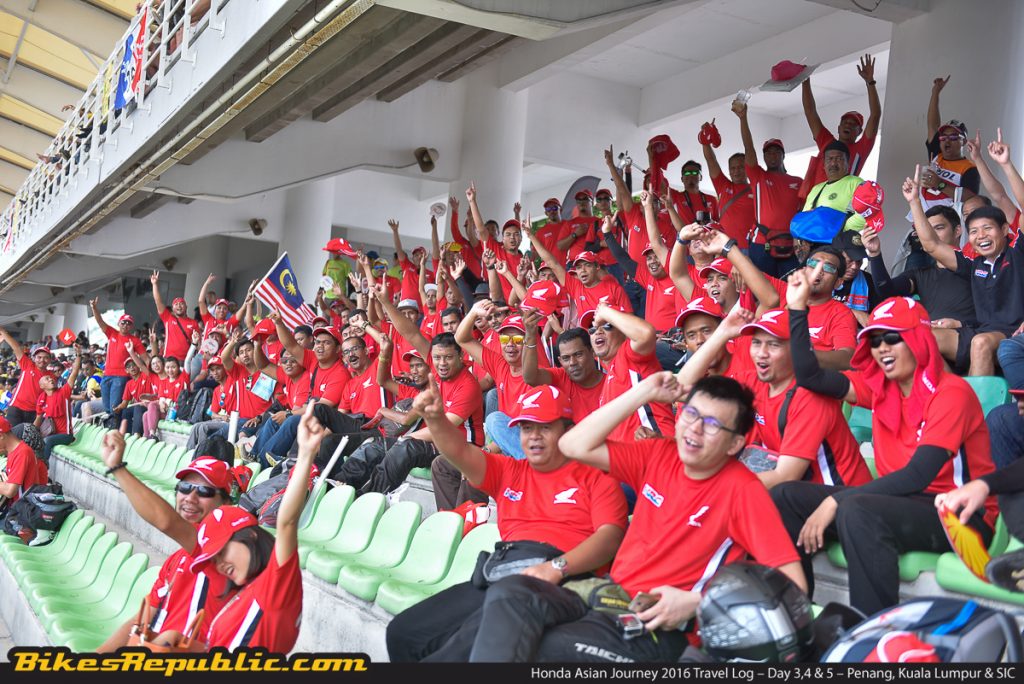 Arriving early, all were able to watch their national riders put on their best in the Moto2 and Moto3 classes before the MotoGP main event kicked off. And all this was done from the comfort of an exclusively cordoned off section of SIC’s South Grandstand and in the circuit newly opened South Paddock as well. 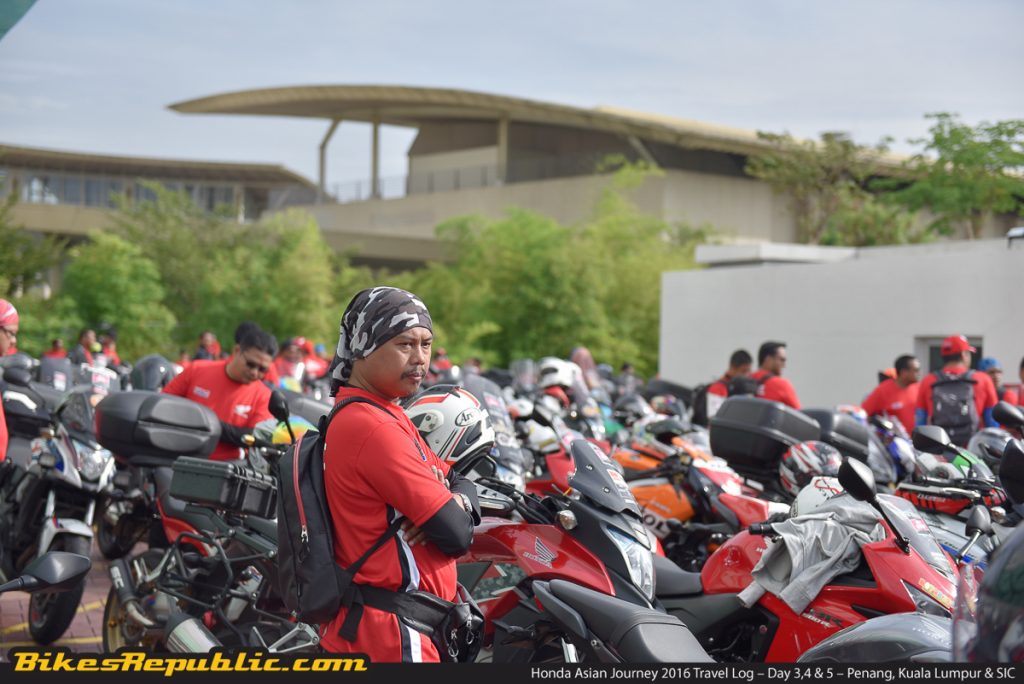 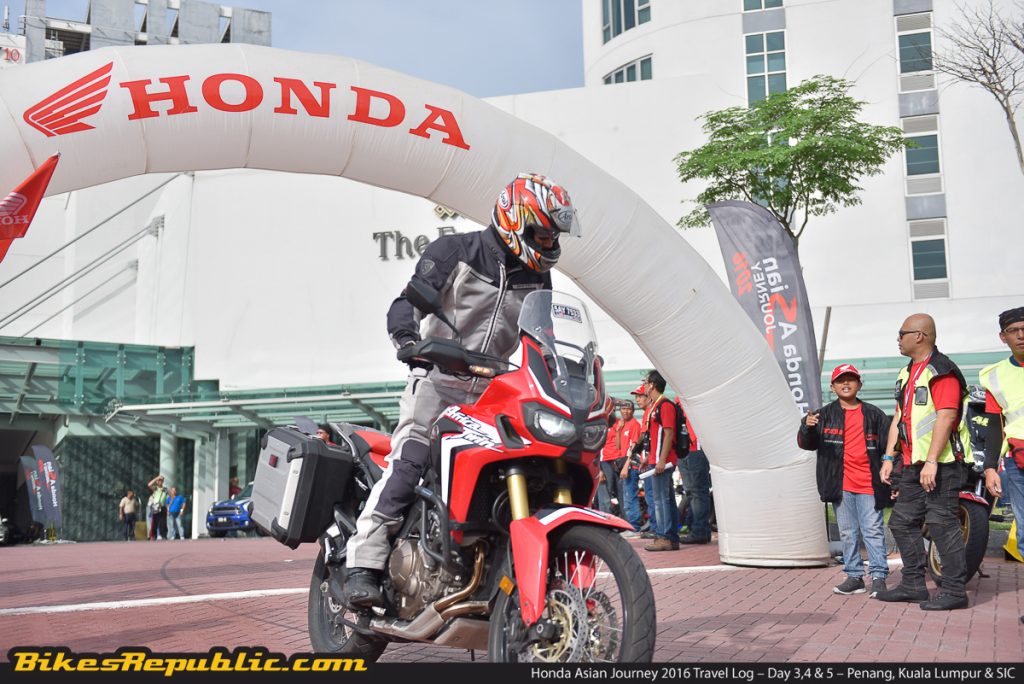 Surely, the interest and reception for the Honda Big Wing image and concept is steadily growing in the region, with Honda’s success in MotoGP plus regional and national racing championships fuelling things further. With that, expect greater things from the marque’s Malaysian partners Boon Siew Honda very soon too.

Check out more images in the extensive galleries we’ve prepared below.