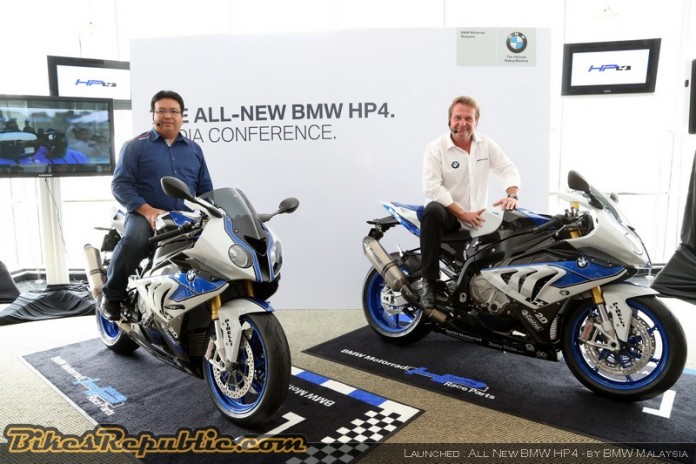 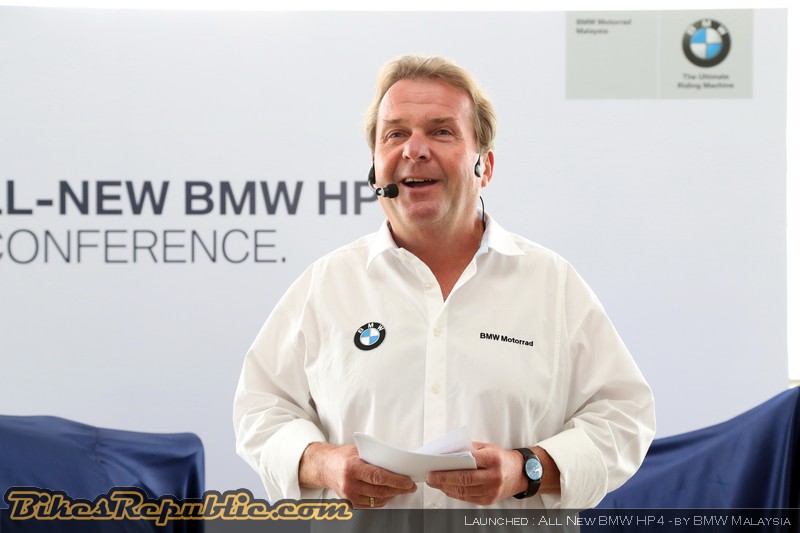 Introducing the new motorcycle from BMW, Dr. Gerhard Pils, Chief Executive Officer of BMW Group Malaysia said, “As the world’s leading premium manufacturer of automobiles and motorcycles, we at BMW demonstrate our penchant for constant innovation yet again with the introduction of the remarkable HP4, the world’s lightest and most dynamic four-cylinder superbike here in Malaysia. The newly introduced HP4 will certainly become one of the key contributors to BMW Motorrad’s impressive sales acceleration in 2013.” 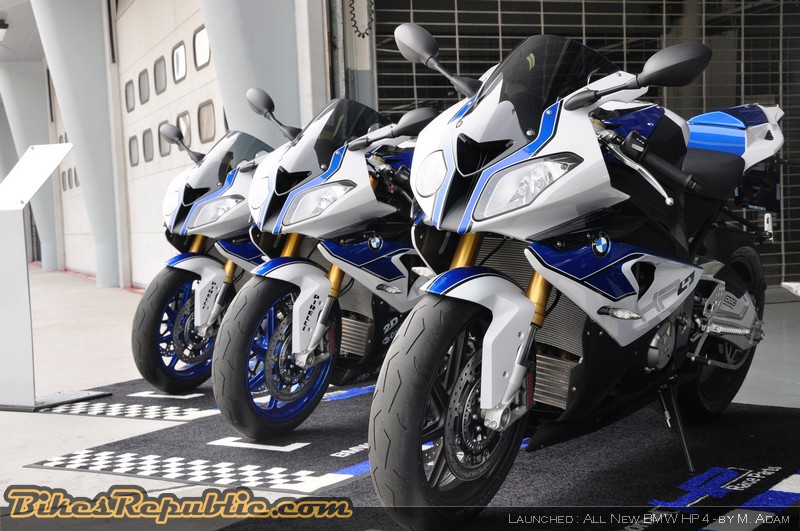 The All New BMW HP4 marks a continuation of the BMW Motorrad High Performance model series founded in 2005. After the boxer engine models of the HP2 Enduro, HP2 Megamoto and HP2 Sport, the HP4 is the first four-cylinder powered motorcycle in the High Performance family which is built using high-quality materials and state-of-the-art technologies and features that are carefully conceived down to the last detail, illustrating BMW’s commitment to meeting the evolving needs of customers. 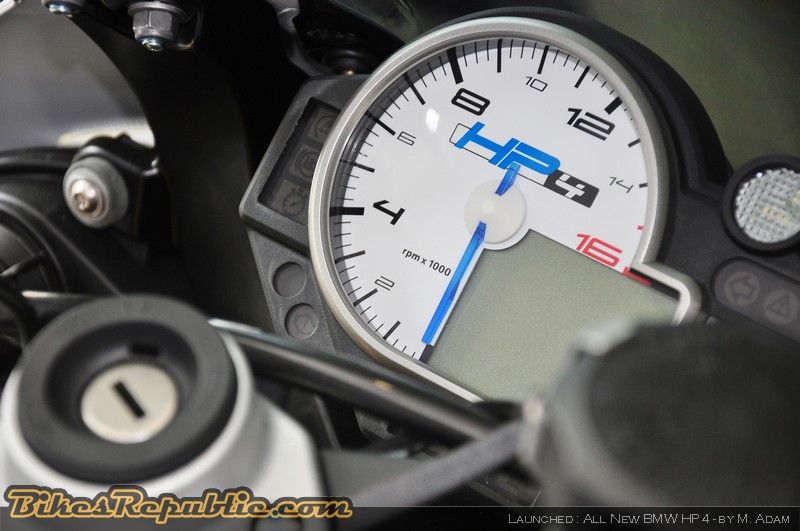 Featuring the water-cooled 4-cylinder inline engine of the S1000RR with a total displacement of 999 cc, the All New BMW HP4 delivers 152 kW (193hp) at 13,000 rpm. The motorcycle is also capable of registering a maximum engine speed of more than 200km/h and maximum torque reading of 112 Nm at the stream of 9,750 rpm. These impressive figures of the HP4 translates to a 0-100km/h sprint of just 2.9 seconds. 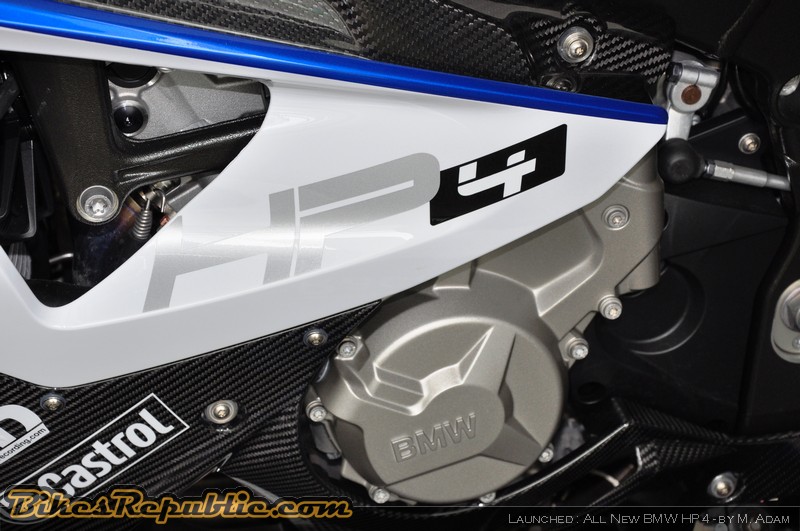 With a performance-orientated engine set-up, the All New HP4 also sees an increased torque delivery in the medium engine speed range. Unlike in the S1000RR, the total output is the same across all modes available – “Rain”, “Sport”, “Race” and “Slick” – with an identical throttle curve and thus the same response, making it race-track perfect. The “Rain” mode in the new HP4 now delivers a smoother output and torque curve available between 2,500 rpm and 8,000 rpm. Despite these impressive performance capabilities, the new HP4 demonstrates an exceptional rate of efficiency, with an average fuel consumption of 5.9 l/100km at speeds up to 120kmph. 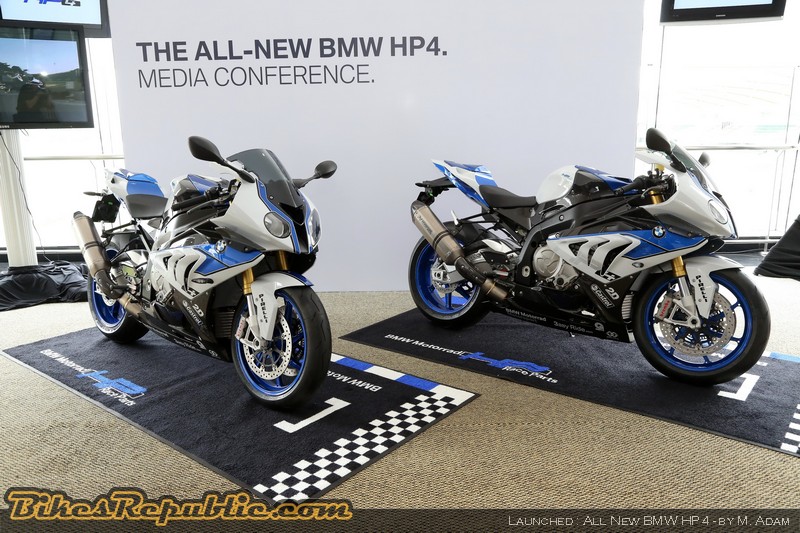 For even more sophistication and a sportier expression, the All New BMW HP4 with the race Competition Package is also available as an option. The package offers refined HP carbon parts such as the engine spoiler, rider footrest system, folding brake and clutch levers and wheels finished in Racing Blue Metallic with a special sponsor sticker kit that enhances the exclusive flair of the supersports motorcycle.

The retail prices of the new BMW HP4 (on the road, without insurance) are:

Watch out for our exclusive review of the HP4 soon!

Check-out our FB Page for MORE photos from the event