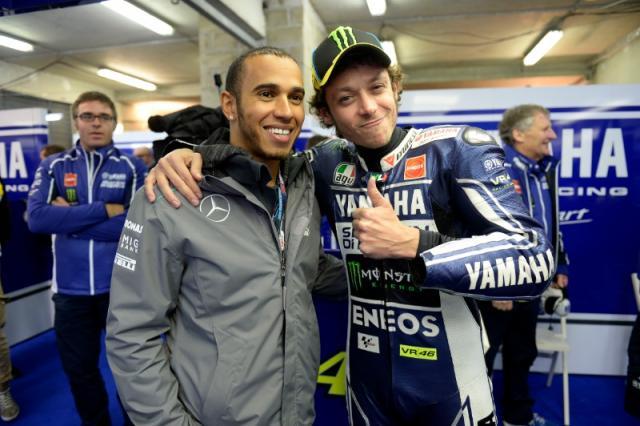 Valentino Rossi will go to Formula 1 while Lewis Hamilton will take his MotoGP seat.

The swap will happen at Valencia circuit on 9th December. Rossi will drive Hamilton’s Mercedes AMG PETRONAS car. Hamilton on the other hand, will ride Rossi’s Monster Energy Yamaha YZR-M1. The deal was probably pushed through by both men’s sponsor Monster Energy.

Hamilton had expressed his wish to ride a MotoGP bike earlier in the year, but it was Repsol Honda who responded with the message “Bring it on, Bro” in a tweet. But it didn’t happen, as expected, as the Repsol riders are sponsored by Monster Energy’s biggest rival Red Bull.

It won’t be the first time Hamilton rides a motorcycle, although it’s his first time on a MotoGP bike. He had ridden the GYTR Yamaha YZF-R1M with PATA Yamaha WorldSBK riders Michael van Der Mark and Alex Lowes at Jerez. He tweeted “Valentino Rossi I need to come to the ranch ASAP.”

As for Rossi, it’s not the first time he’s behind the steering wheel of a four-wheeler, either. He competes in the Monza Rally annually and has won it seven times up to last year. He had also tested in Michael Schumacher’s Ferrari Formula 1 car many years ago. He impressed the multiple champion so much that Schumacher offered him a spot as a driver.

We can’t wait to see the upcoming event!