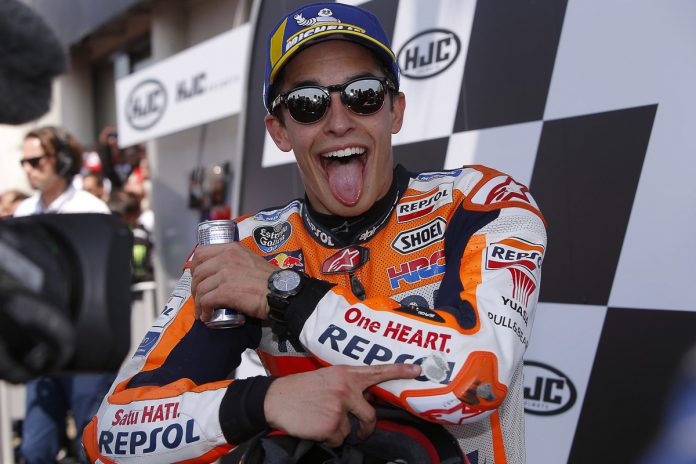 Valentino Rossi (Movistar Yamaha MotoGP) returns to the podium despite struggling with handling and grip. 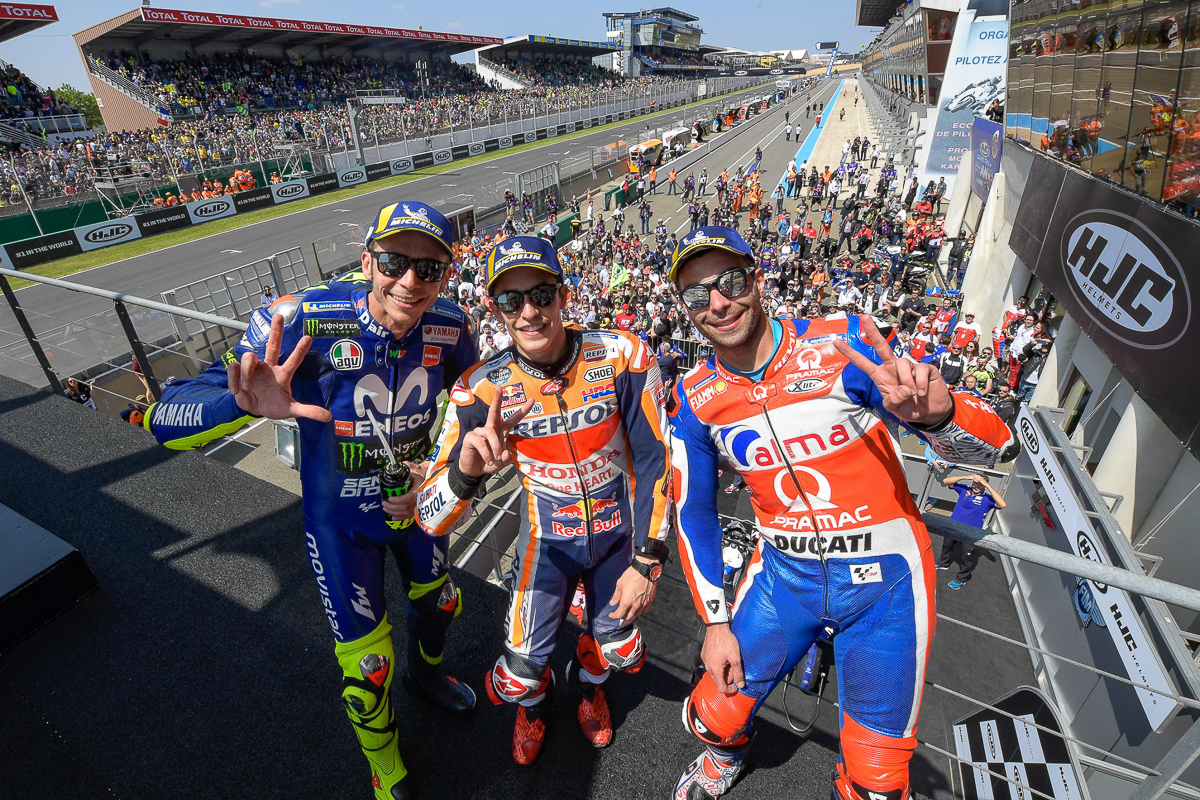 It was an ultra-dramatic MotoGP race last night at the HJC Helmets Grand Prix de France. Many events unfolded which resulted in Repsol Honda’s Marc Marquez winning his third race of the season and equalising the number of premier class wins to Casey Stoner’s total of 38. 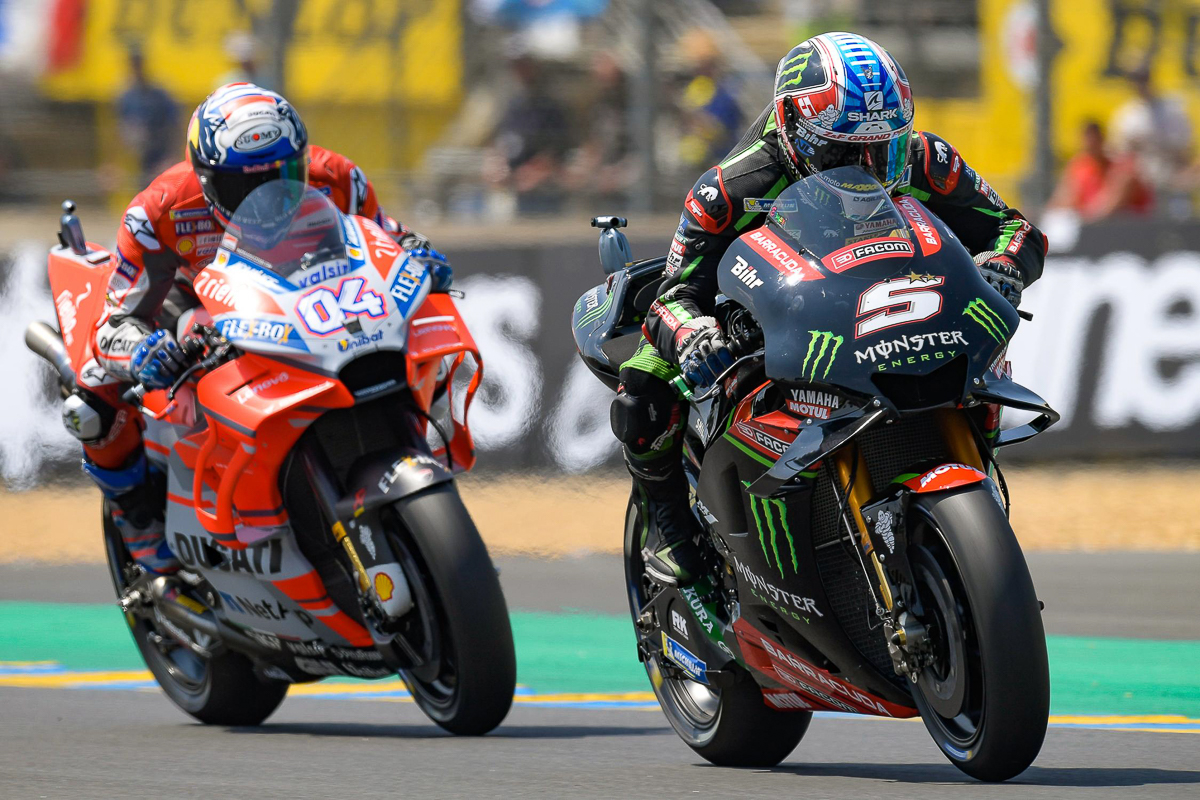 Johann Zarco (Monster Yamaha Tech 3) was the favourite to win yesterday’s race in front of his home fans after obtaining the pole position on Saturday. His dream of winning his first ever MotoGP race came to a screeching halt after crashing out in Lap 8.

The fall was resulted in Zarco’s own error whilst fighting at the front with the likes of Ducati’s Jorge Lorenzo, Andrea Dovizioso, and of course, Marc Marquez. Lorenzo surprised everyone yet again by performing a perfect race start and taking the holeshot into Turn 1. 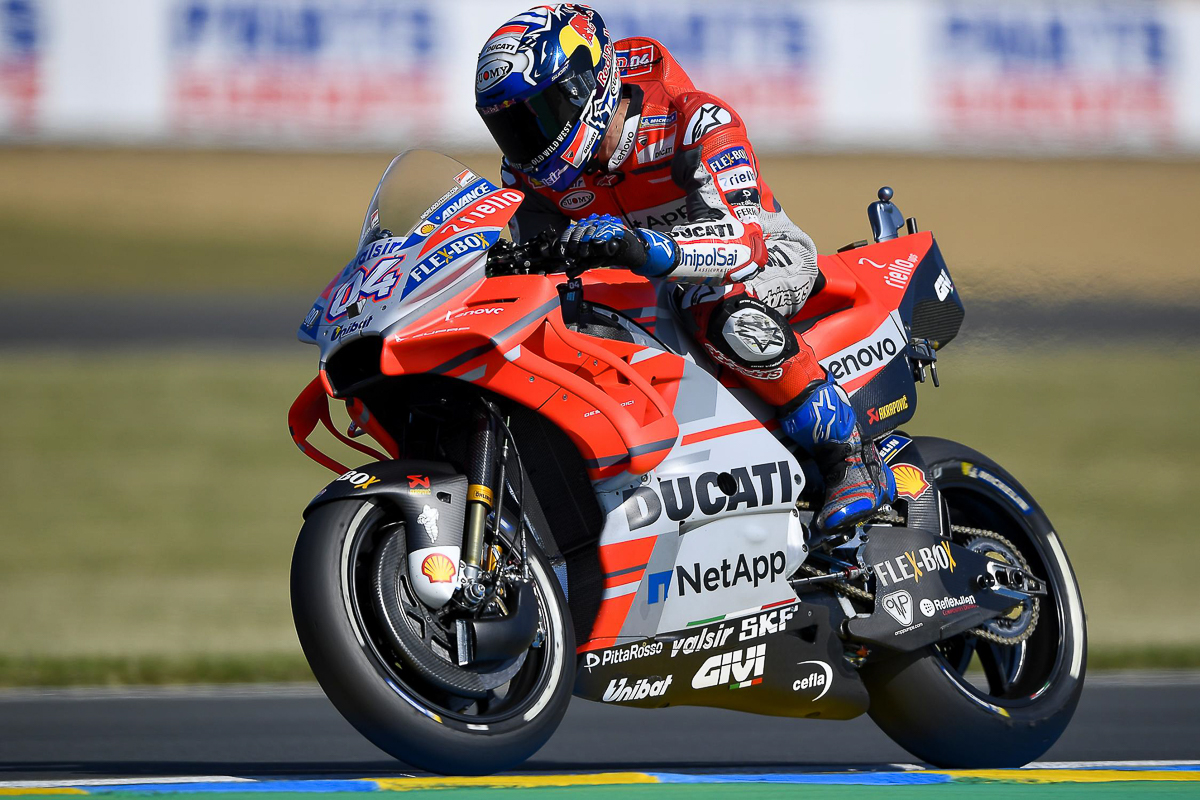 Even Andrea Dovizioso crashed out after a surprising (and rare) race error which even the rider was surprised as to what had happened. Thanks to the fall, the Ducati factory riders dropped down hard in the 2018 championship all the way down to P9 with a total of 46 points. 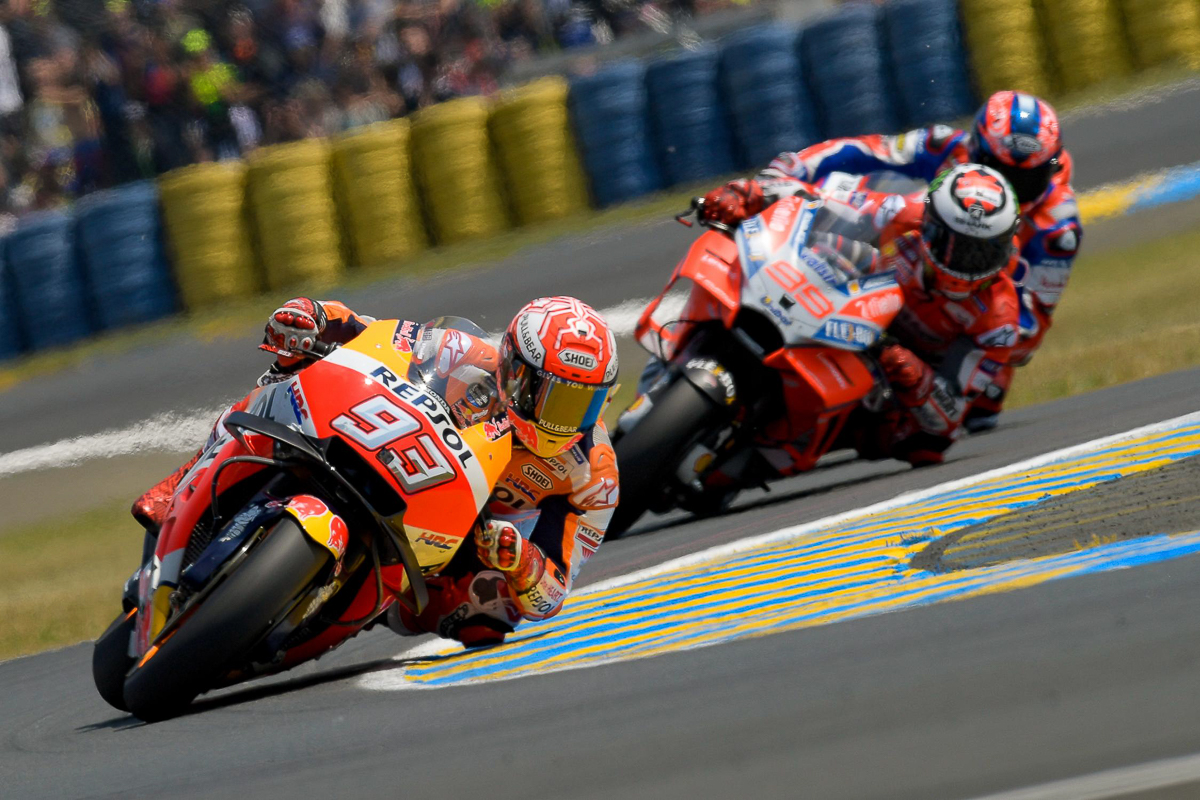 After a number of laps, Lorenzo dropped his position which gave the opportunity for Danilo Petrucci (Alma Pramac Racing) to finish the race in second place as well as the top Ducati rider. Surprisingly, Valentino Rossi (Movistar Yamaha MotoGP) returns to the podium with his Yamaha M1. 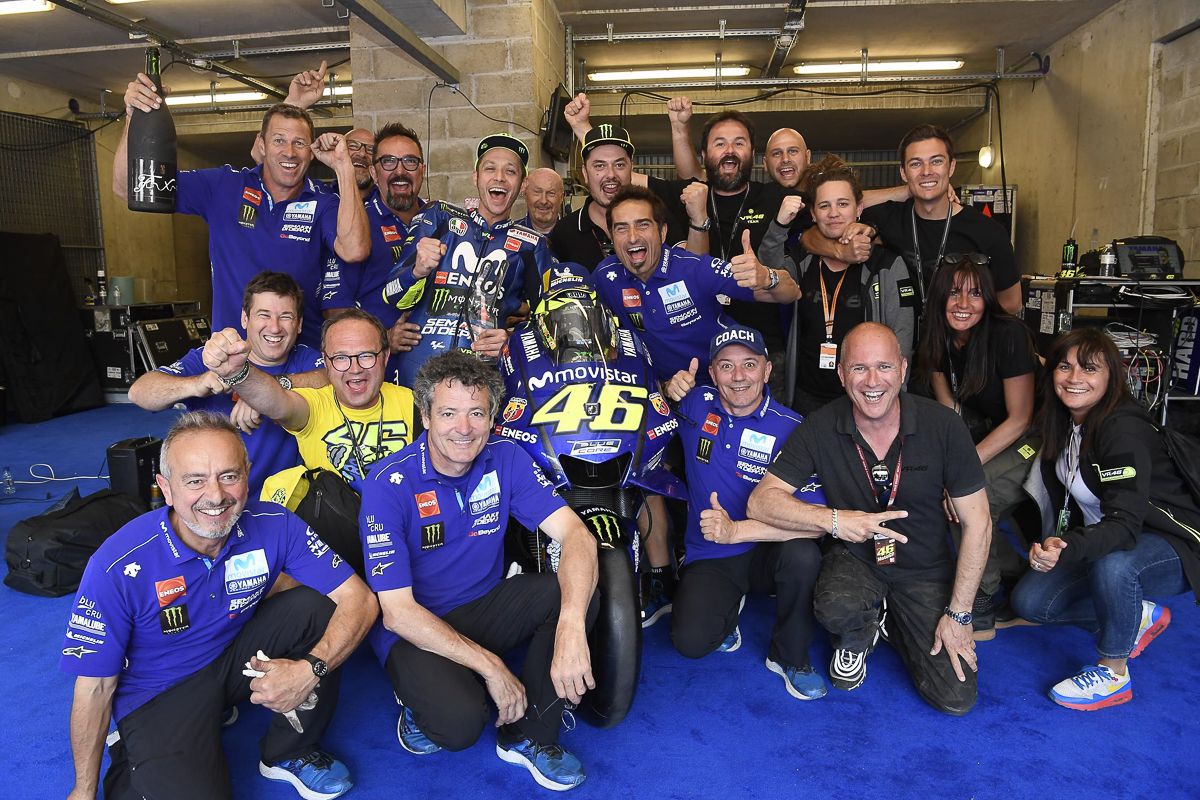 Jack Miller (Alma Pramac Racing) also improved his pace significantly and finished the race ahead of Jorge Lorenzo. There were many rumours pointing towards Miller replacing Lorenzo in the Ducati factory team and his result today certainly helps out in his favour. 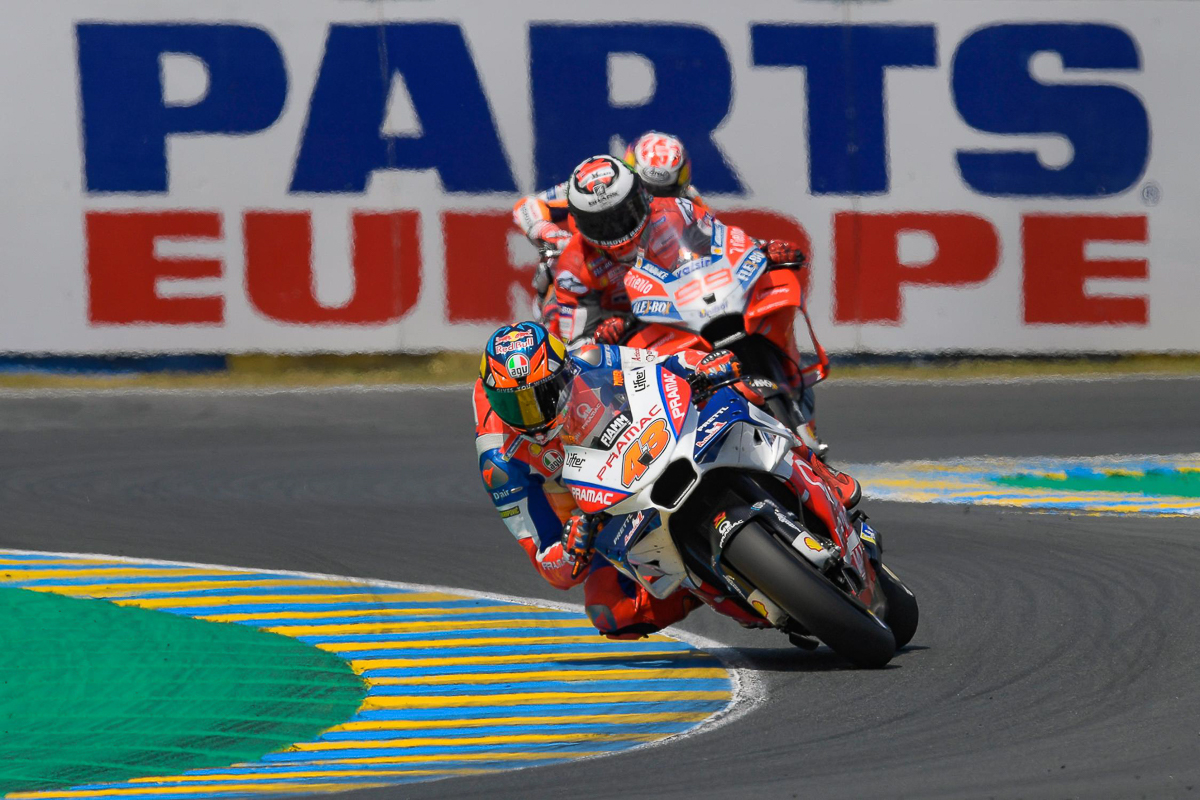 There were many fallouts in the race with the first casualty being Andrea Iannone (Team Suzuki Ecstar). He lost control of his Suzuki GSX-RR in the very first lap and ended Suzuki’s hope of getting their fourth podium of the season. 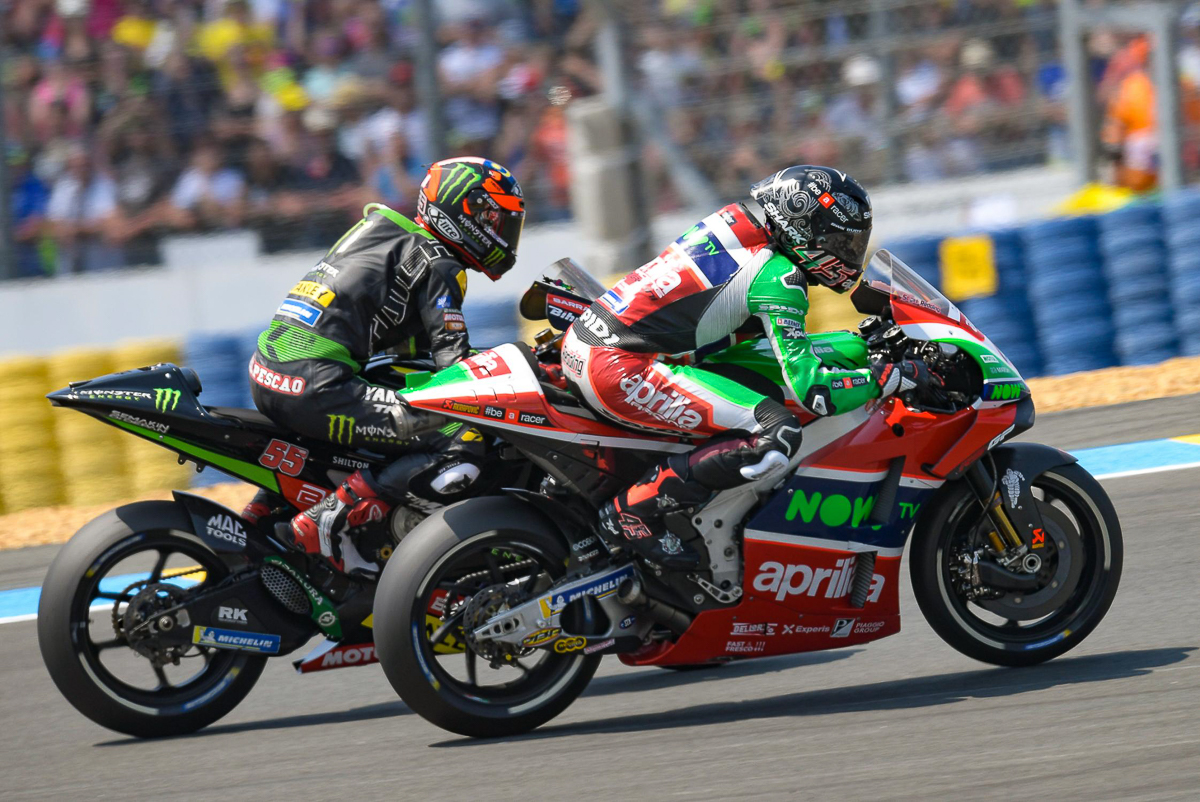 At the back, there was a great battle for the top MotoGP rookie between Moto2 world champion, Franco Morbidelli (EG 0,0 Marc VDS) and Malaysia’s very own Hafizh Syahrin (Monster Yamaha Tech 3). Hafizh Syahrin finished the race triumphantly in P12 ahead of all the rookies and only 2.6 seconds behind KTM’s factory rider, Pol Espargaro. 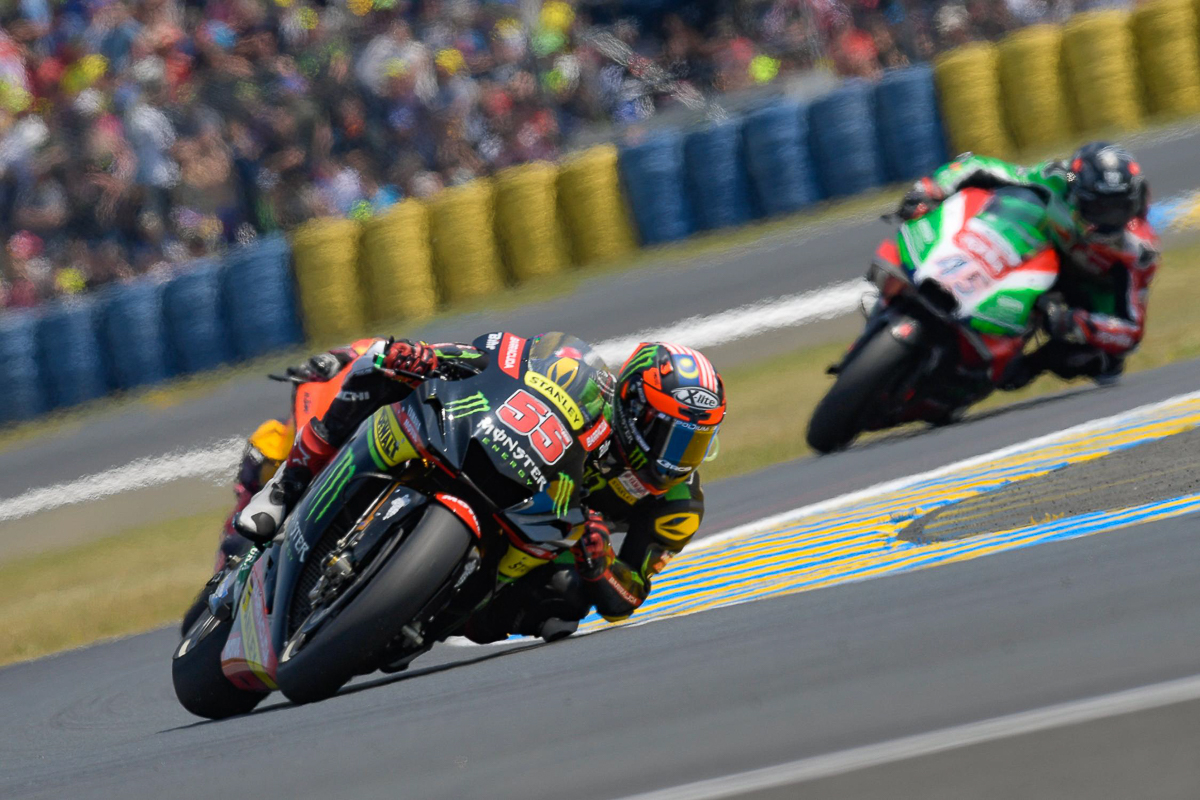 The French round certainly opened up a lot of eyes and we expect that there will be many surprising announcements in the coming weeks. Stay tuned to Bikes Republic to know more.