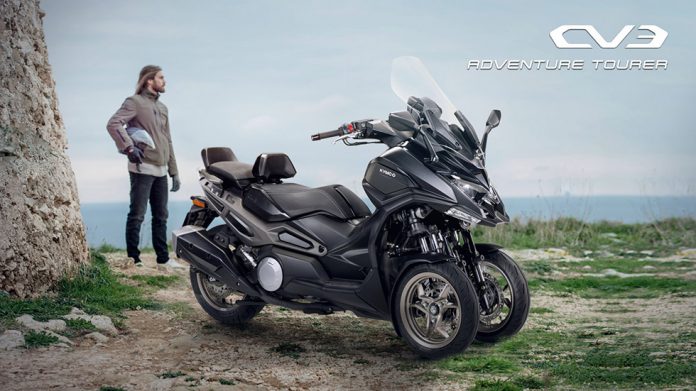 While most of us are still on the fence regarding the 2021 Kymco DT X360 adventure scooter, Kymco also introduced its first three-wheeler in the form of the 2021 Kymco CV3. Marketed as an ‘adventure tourer’, it positions itself as a maxi-scooter that can cover great distances with a luxurious riding experience.

The brand’s chairman also stated that the CV3 has already been finalised for mass production, which will begin sometime next year. We can expect to see this adventure-style three-wheeled maxi-scooter enter several markets around the globe, including Europe.

What’s special about the CV3 is that it offers high levels of comfort as well as performance thanks to a few specs such as its 550cc twin-cylinder engine, upright riding position, ergonomic seat design for both rider and pillion, and more. No power figures yet, though, but if it’s anything like the AK550, we can expect somewhere in the region of 40hp.

We can also see other features like all-LED lighting system, twin-shocks setup for each front wheel, huge front windscreen, and ample underseat storage space. Not exactly like the Yamaha Niken, but more of a middleweight and ‘easy to ride’ scooter for the masses.

More details are expected to be released in the future. For now, you can enjoy watching the trailer video for the 2021 Kymco CV3 adventure tourer three-wheeled maxi scooter, above.