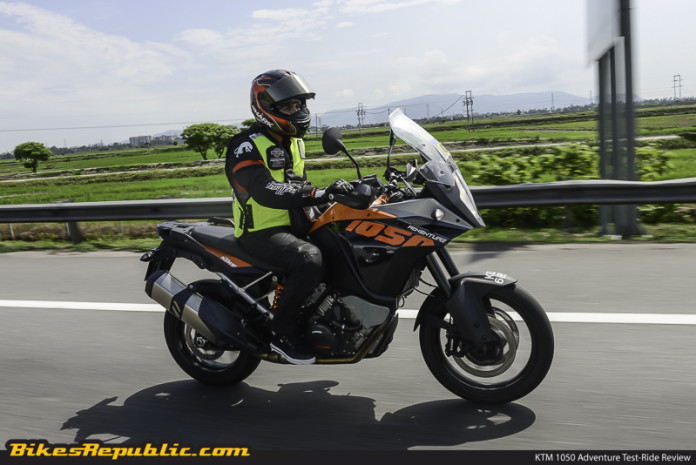 And so comes the question of which does it best – and this is probably the most important question. Further up the price segment and engine capacity are the bikes that pretty much define the segment, bikes like the ever-popular BMW GS, the Triumph Tiger, Yamaha Super Tenere and this among others, the KTM Adventure. 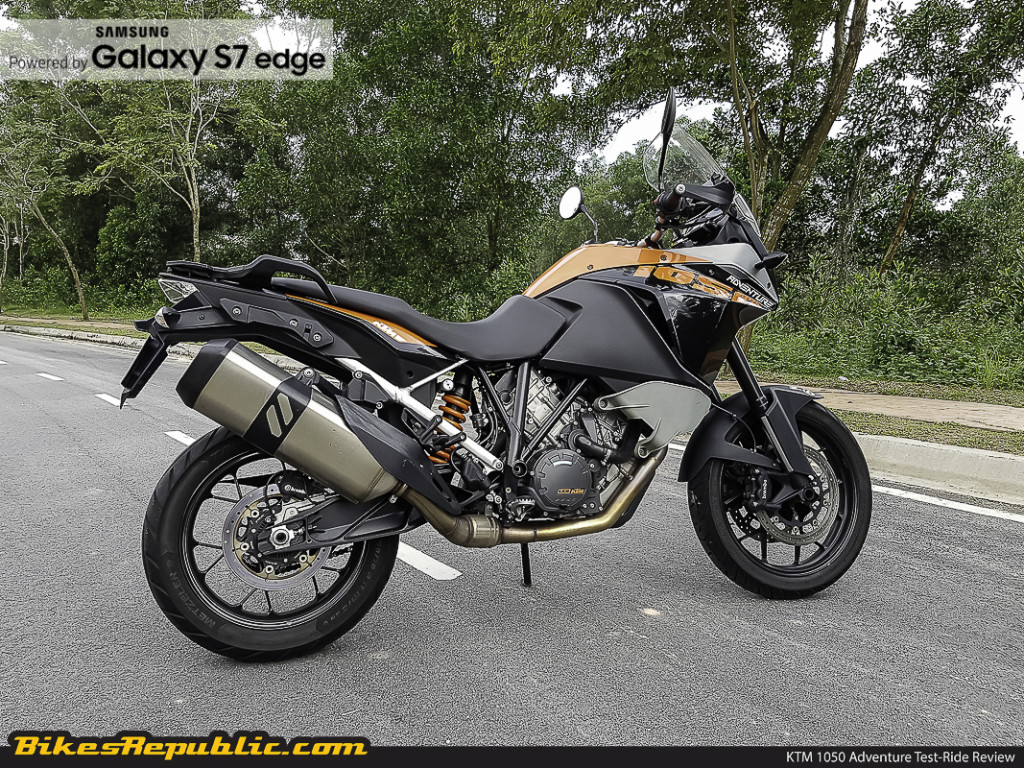 Which of these bikes is best is a topic best left to internet forums and explosive Facebook debates, but trust that the KTM 1050 Adventure will be part of any fiery conversation. It’s predecessor, the painfully underrated 990 SMT was a legend the moment it was introduced. Lightweight with stupendous power delivery, a comfortable sitting position together with ease of maintenance, the SMT was a bike of dreams. 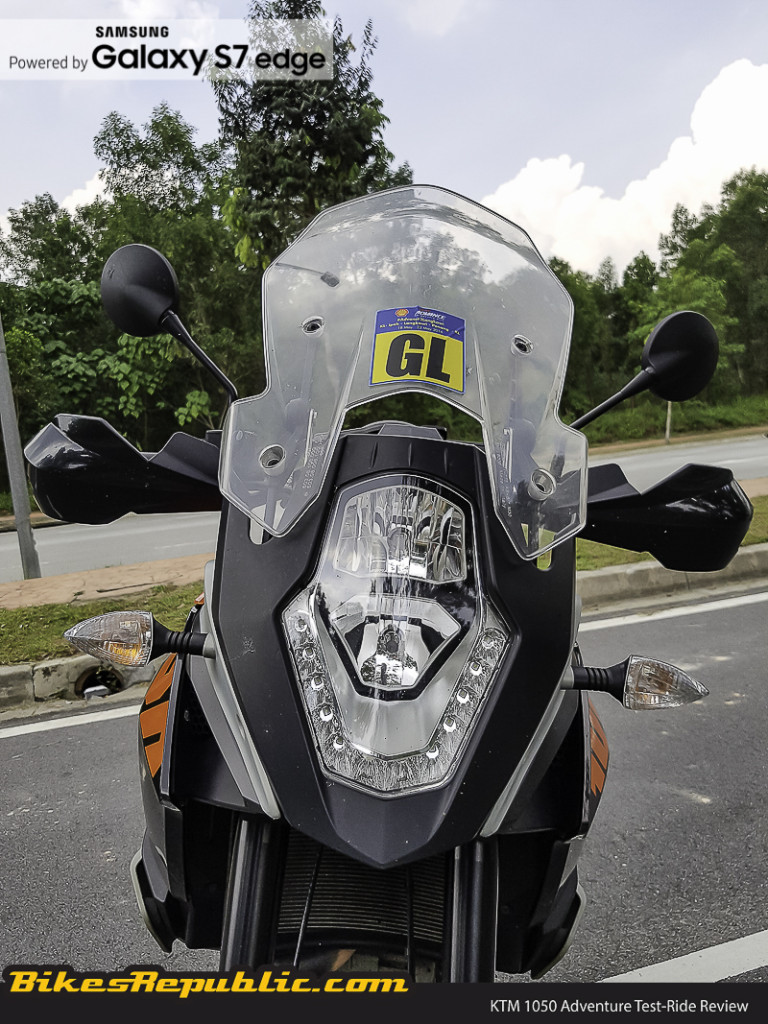 Though not widely available in Malaysia, it’s reputation preceded it. The 1050 Adventure improves on all that and takes it further with a handsome yet usable package.

Having spent a week with it, riding it all the way to Langkawi Island and back, spending about 1200 kilometers with it, I will tell you that this is one brilliant motorcycle. The perfect all-rounder. Narrow enough to squeeze through traffic, wide enough for good handling, and all that Jazz. 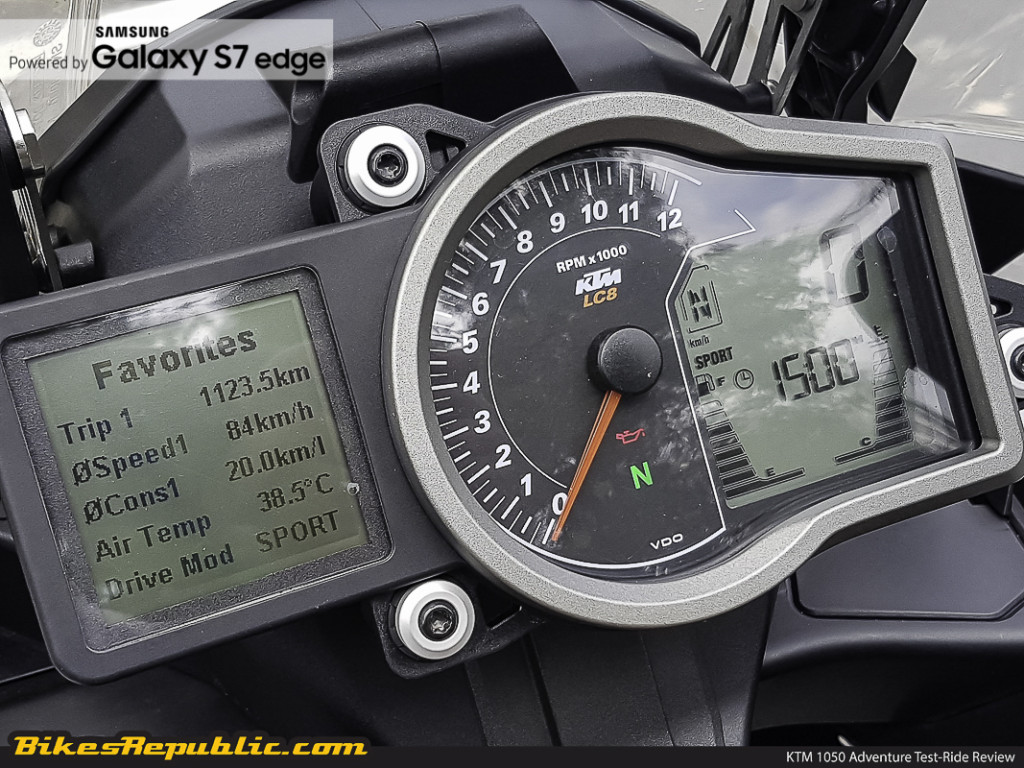 So what did I love most about it? The looks for one, there is no denying that the 1050 Adventure is a handsome bike, and that orange/black combination is a gorgeous combination. The front daytime running lights (DRL) look a little dated with individual LED bulbs, but let’s consider the fact this bike was introduced back in 2014. 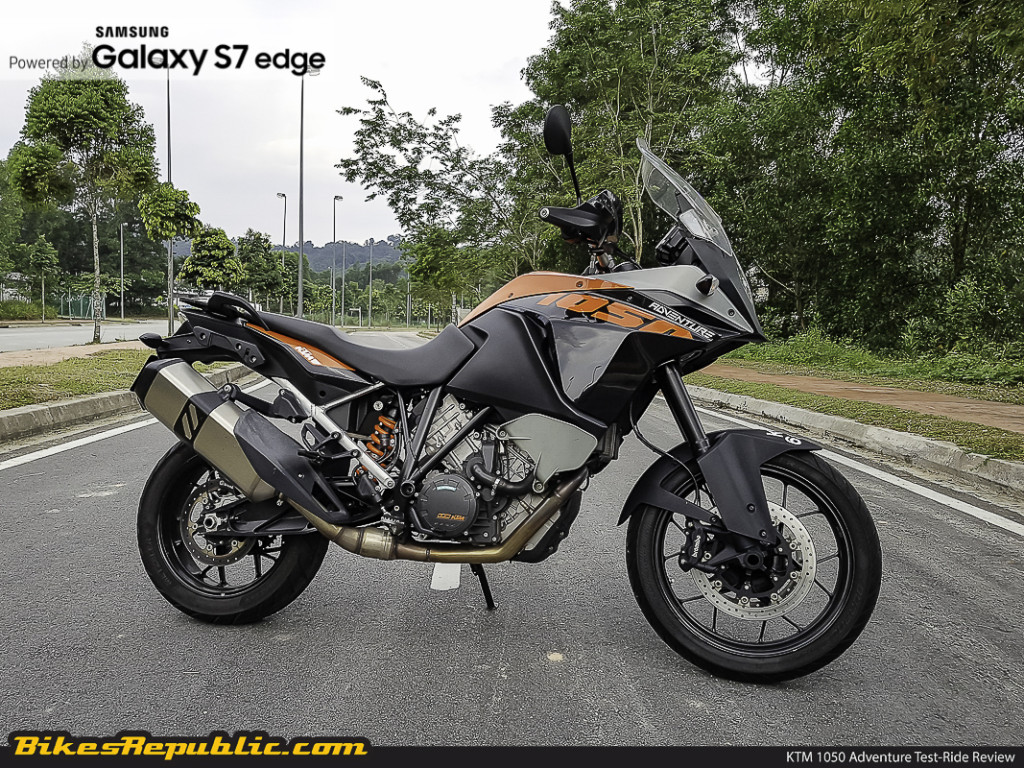 Then came the sitting position, spot on for a six-foot tall rider, and comfortable too. There is a taller seat option but that is a chargeable aftermarket item. The seat is narrow at the front which makes it easier to grip the tank and reach the road when coming to a stand still, and is wide at the rear to cusp your buttock in place when you need to crunch some miles. Talking about comfort, the windshield has a 25mm range of height adjustability, but I wish it was 28mm though because there was still turbulent air at the top of helmet, creating an uncomfortable and noisy air vortex. 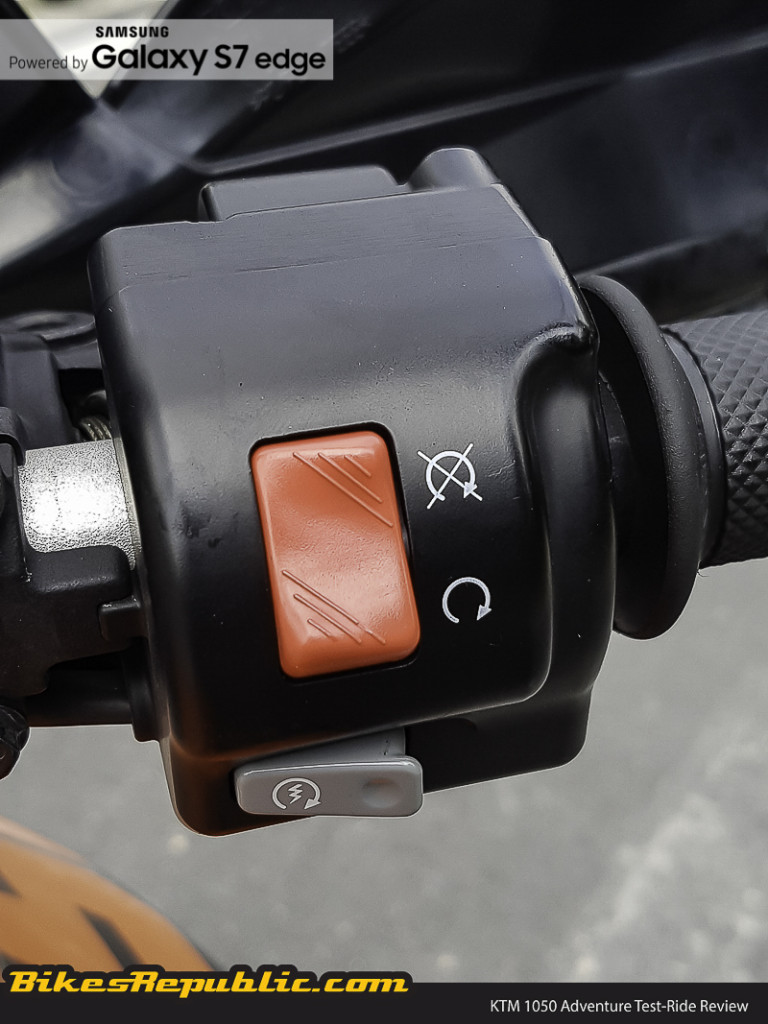 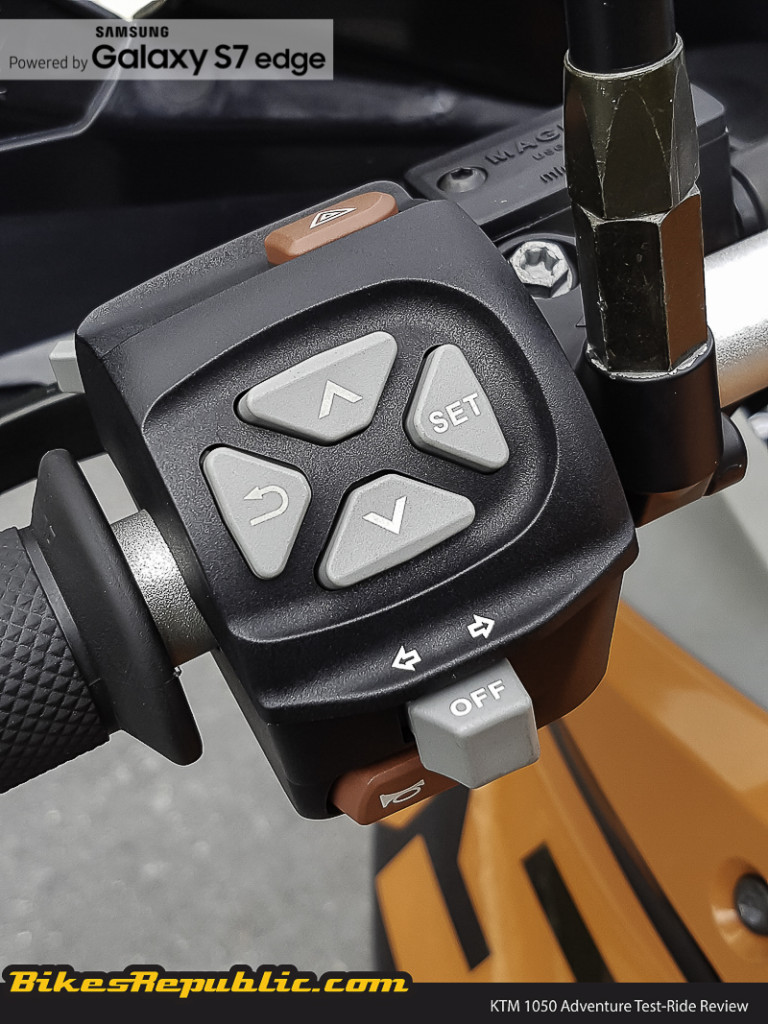 The controls around the cockpit are large and clearly marked out, making it easy to manage the switches and buttons. The digital instrument panel is large and easy to read on the move; it doesn’t try to throw too much information at you at the same time, but it would rather you scroll through the menus with large fonts making it easy to read while moving. 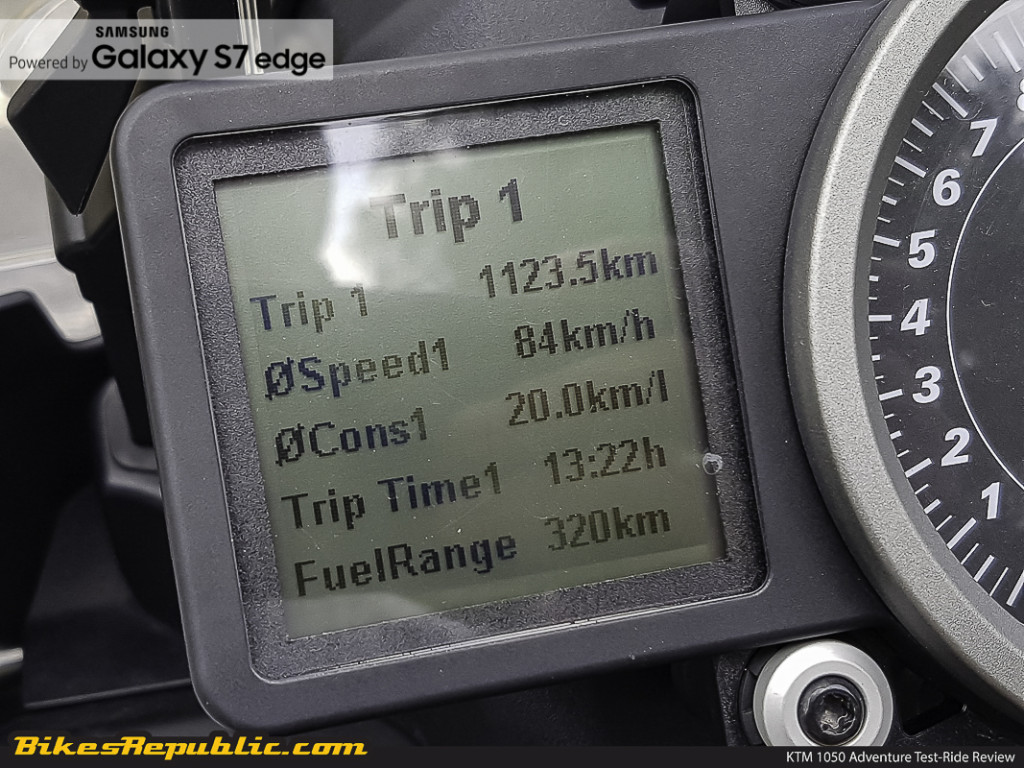 There is also a bunch of electronic safety nets as well. Traction Control is standard and disengageable. There are three riding modes to chose from – Street, Sport and Rain – which limit power and electronic interference. And selecting between the modes is easy, just flip through the modes, chose the one you want, close the throttle for a second and the mode is changed. Easy. 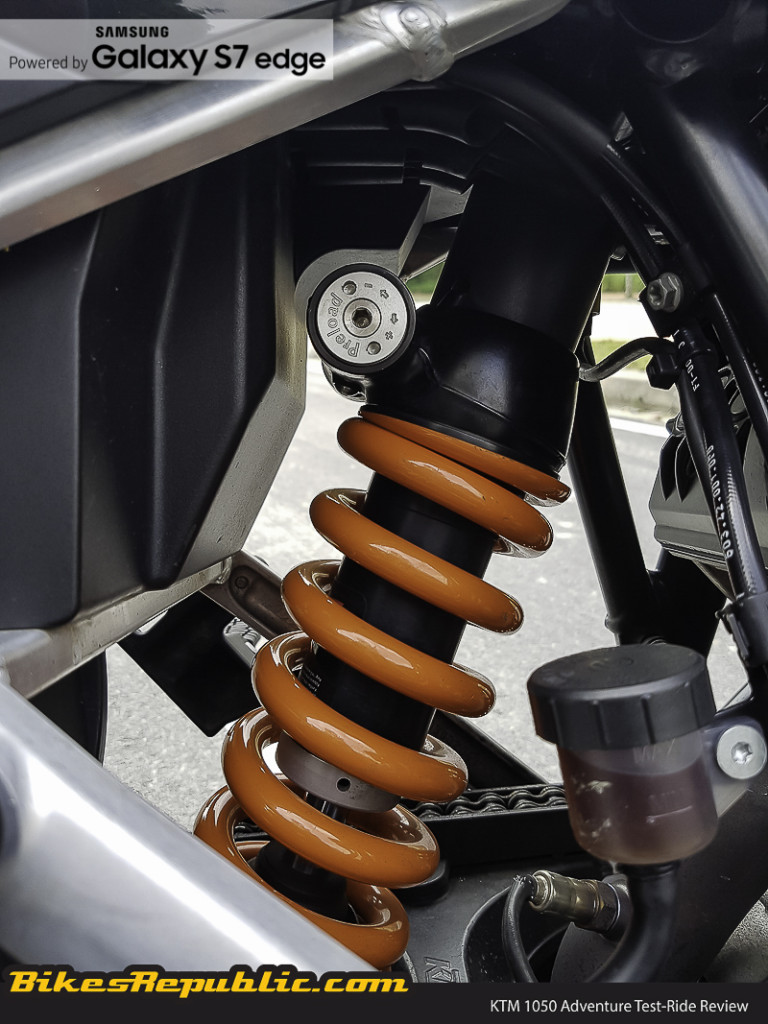 Besides the easily adjustable rear shock (see above), there is also a dual-channel anti-locking braking system supplied by Bosch. It applies to both front and rear wheels though there is an optional off-road mode that allows you to deactivate the rear ABS for when you want more wheel slip. 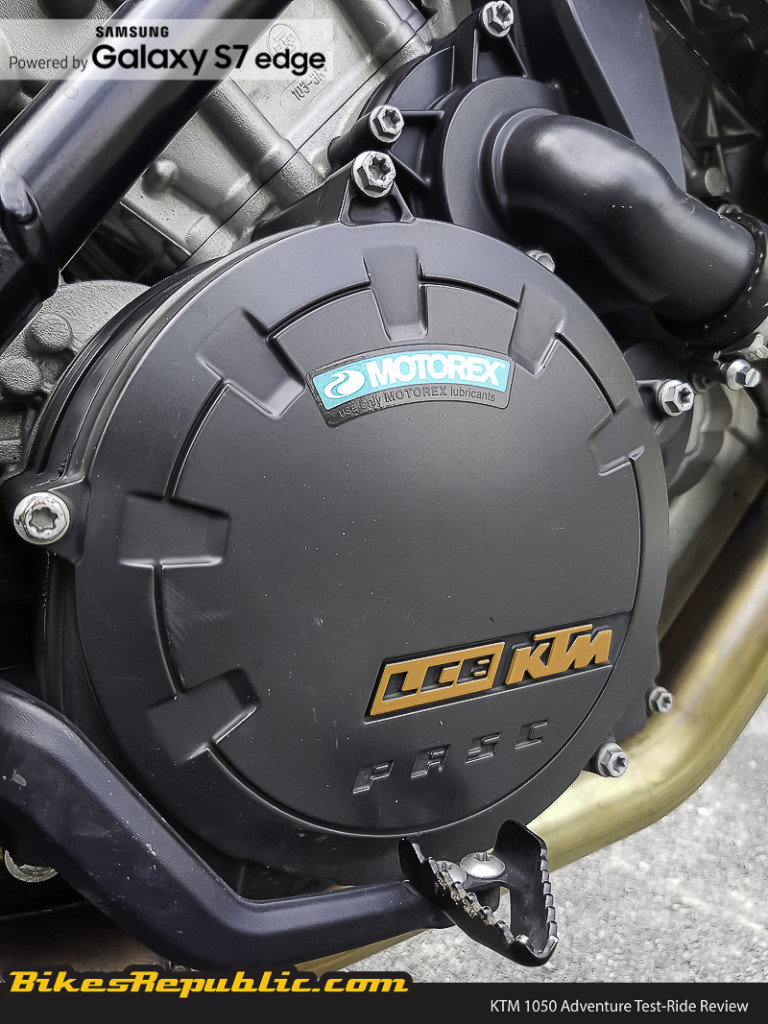 Though friendly even for novice riders, the 1050 Adventure does not skimp on power – it offers 95 horsepower and 107Nm of torque out of its 1050cc V-twin engine. 90Nm of torque is available from as low as 2500rpm, which is handy on the highways and when you want to get out of a difficult situation – just squeeze and you’re gone. Some media outlets say that power could be better, but never once did I feel starved of power throughout the ride. 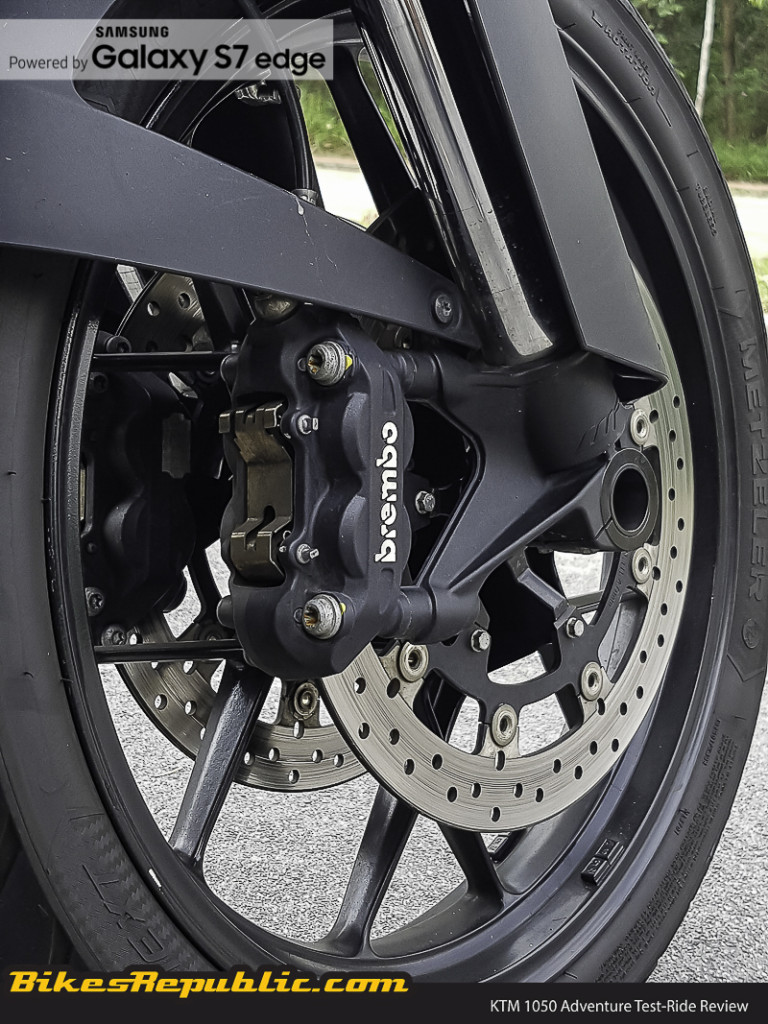 So on a serious note, when it comes to Adventure bikes, it rarely gets better than the KTM 1050 Adventure. Priced at RM68,888, the 1050 Adventure is a seriously good deal. Sure there are others like the BMW F800 GS which is cheaper at RM61,900 and the triple cylinder Triumph Tiger Sport priced at RM76,900. Against the BMW, the KTM outshines it with a bigger engine and more power. Against the Triumph, well that just asks for a head-to-head shootout. 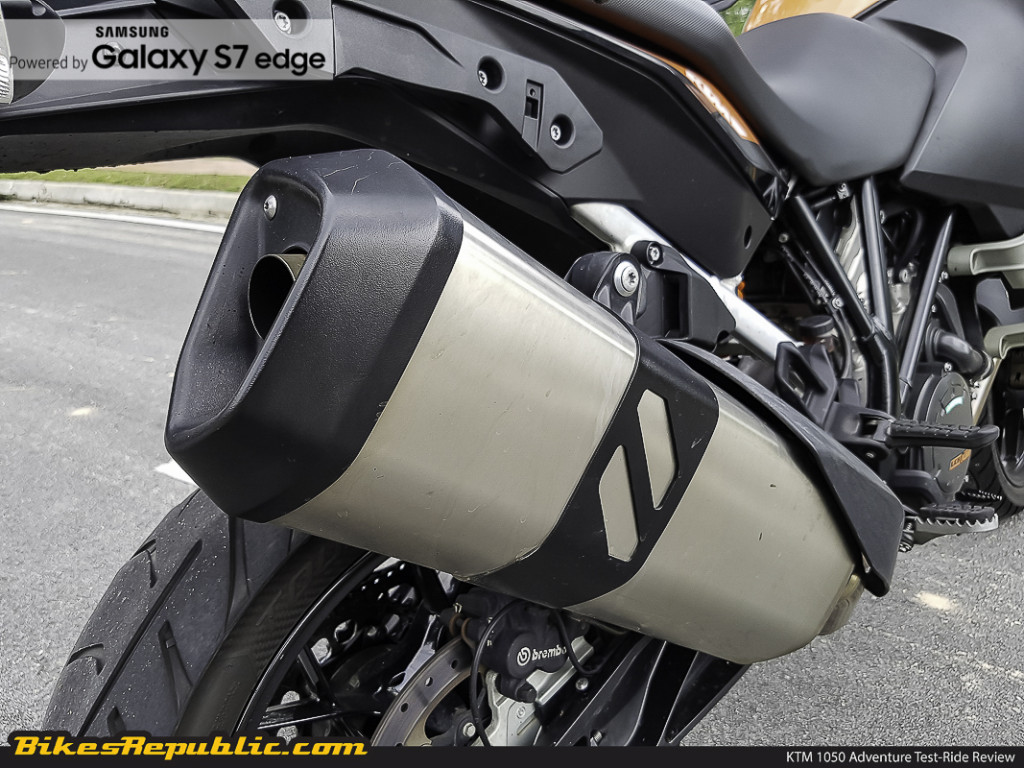 But when it comes to Adventure bikes, my heart has been won by those who build bikes to take on the grueling Dakar rally. They should know how to build lasting bikes worthy of being called an Adventure bike. Don’t believe me? Take the 1050 Adventure out for a ride at the official KTM showroom in Kota Damansara and marvel at how light it is, how much torque is on offer and best of all, all the good things you get at a cheap price.