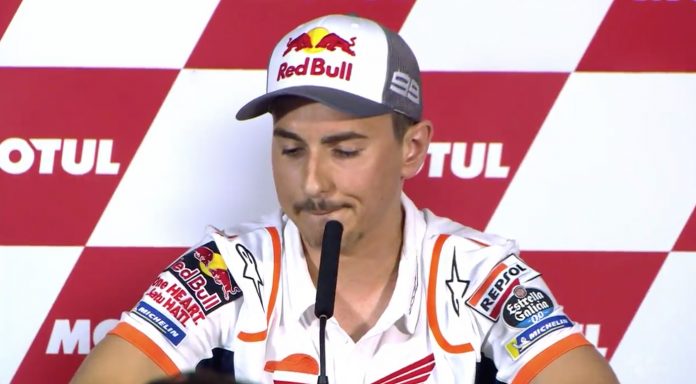 The five-time world champion made the shock announcement in an “exceptional press conference” just prior to the start of the season-ending Valencia Grand Prix. He was accompanied by Dorna Sports CEO Carmelo Ezpeleta.

While the announcement shocked some, it may not be so to others. Lorenzo switched over to the Repsol Honda team this year to replace the team’s long-time rider Dani Pedrosa.

He knew that it would be an uphill task to adjust his riding style to a bike which is suited to his teammate Marc Marquez, but maintained a positive outlook although he couldn’t finish higher than 11th.

However, Lorenzo was fast as soon as he found his rhythm in Catalunya. However, an over-enthusiastic lunge took out Andrea Dovizioso, Maverick Vinalez and Valentino Rossi along with himself.

Then, a huge tumble in the gravel following a crash at Assen during the Dutch TT fractured a vertebrae.

He made a comeback at the British MotoGP round exactly two months later, but the pain forced him to finish 14th. He would finish no higher than that position in the next five rounds leading to Valencia. He has collected 25 points after 18 races and lies 14th in the 2019 championship.

The rider apologised to Honda and team manager Alberto Puig for having to stop a year earlier than his stipulated contract. He cited that he had lost the motivation to compete. But before one criticises his move, breaking one’s back isn’t something anybody likes to do.

Lorenzo’s retirement opens up a spare seat at the factory team. There’s no word from HRC yet but Cal Crutchlow or Johann Zarco are heavily touted to replace Lorenzo.