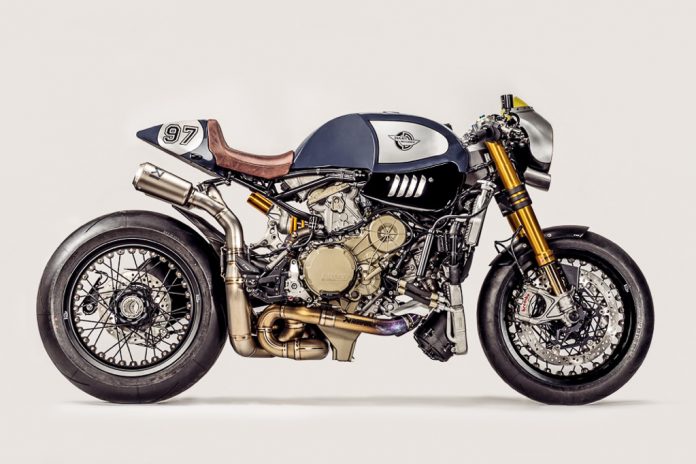 Together with Ducati Zentralschweiz, Schaub Metalworks and Akrapovič, the dream team was assembled to pull off this amazing project.

Most of the metalwork was done by Raphael Schaub from Schaub Metalworks which was made all by hand without any form of electronic aids. 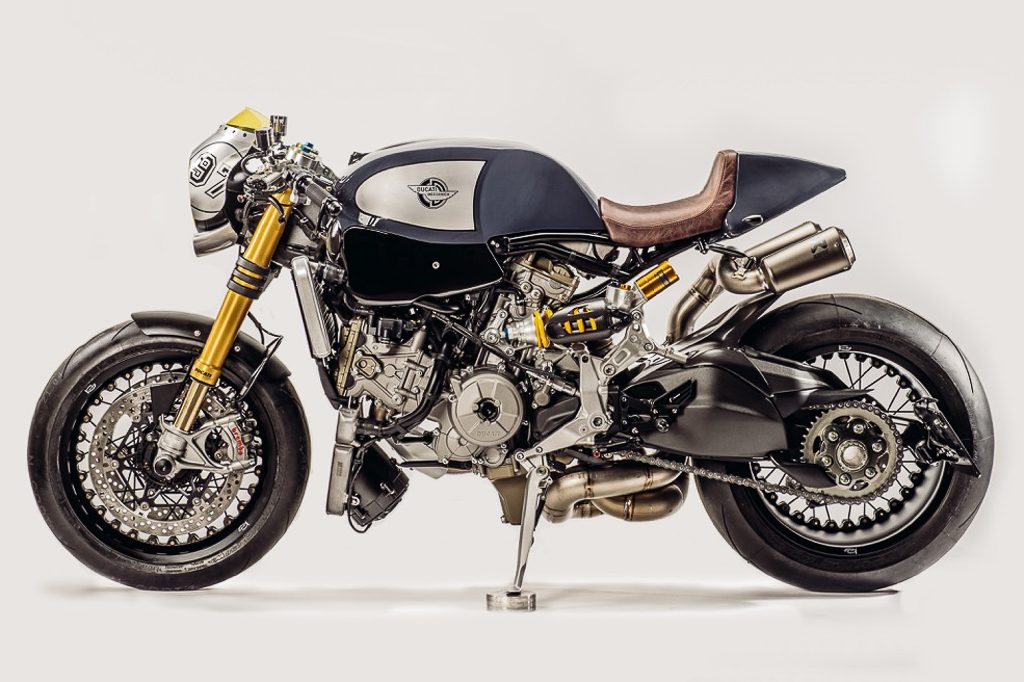 Yes, you read that right. This is a Ducati Panigale R cafe racer. Dubbed the ‘Blue Shark’ by its mad creators over at Swiss company Parts World, the project is more than just turning a state-of-the-art superbike into a one-off custom bike of the century. Parts World hailing from Switzerland is actually a premier aftermarket distributor. 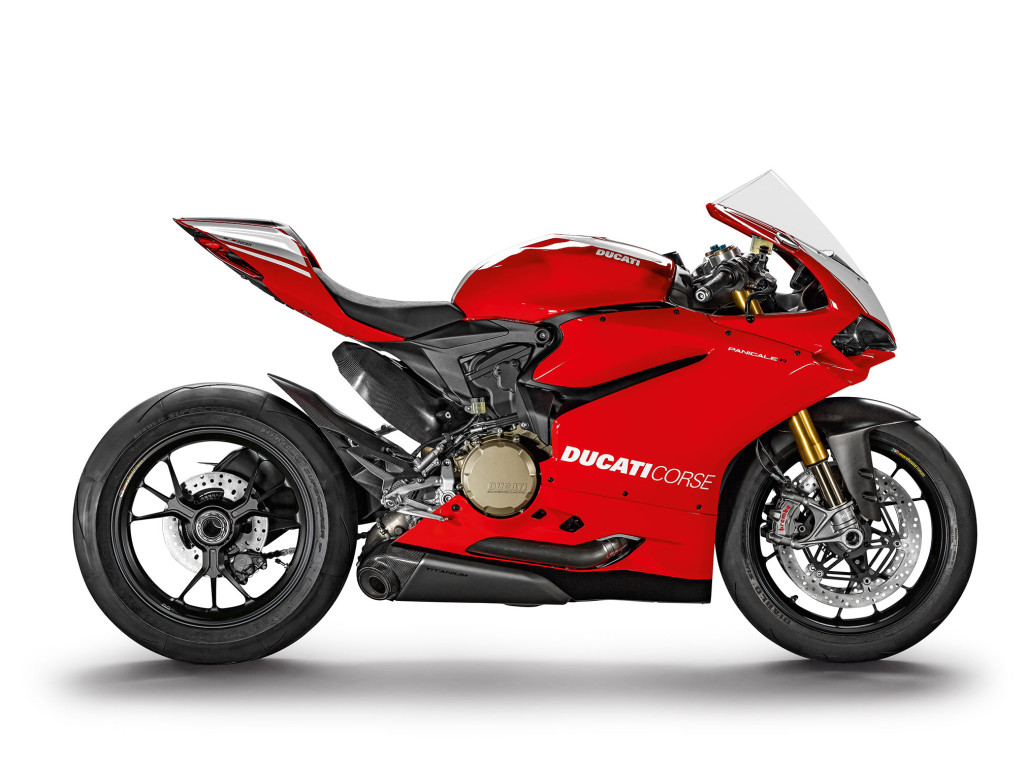 Australian Motorcycle News went on to seek out on why someone would go for this kind of project that could lead to so many potential errors. The only person who could explain the magnitude of this project was the CEO of Swiss company Parts World, Andy Matter. 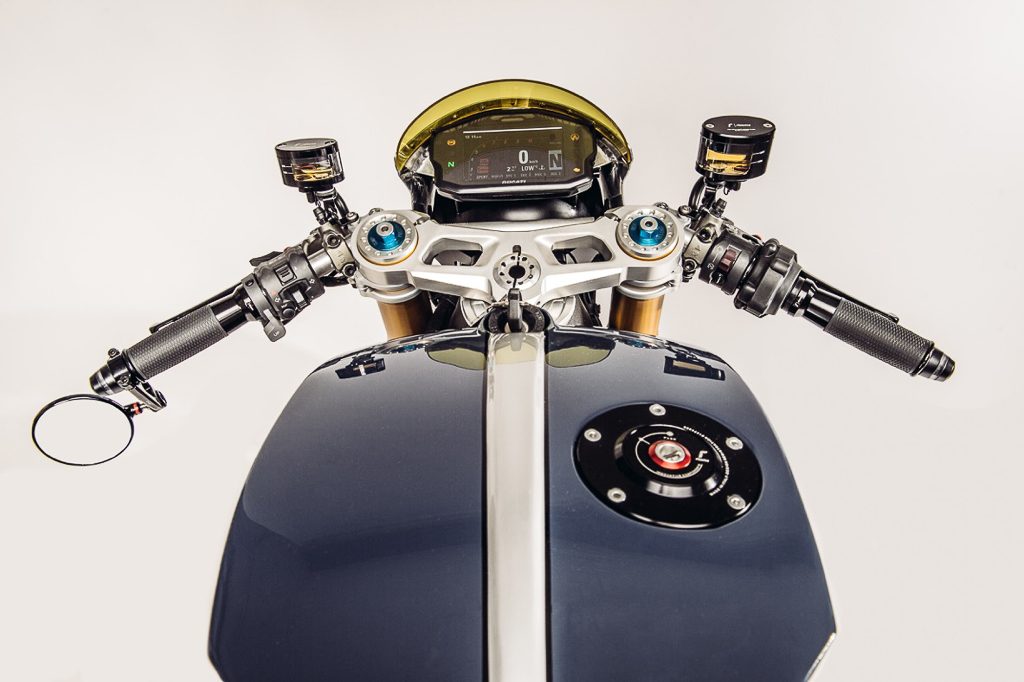 “After browsing the web and many other sources, I found that no one had ever customised a Panigale R as a café racer. Moreover, the Ducati specialists were doubtful anyone would succeed with such a project. They said, ‘Hey, it is already the world’s most beautiful sportsbike, you can only make it worse’. That’s when the trigger was pulled in my head.” 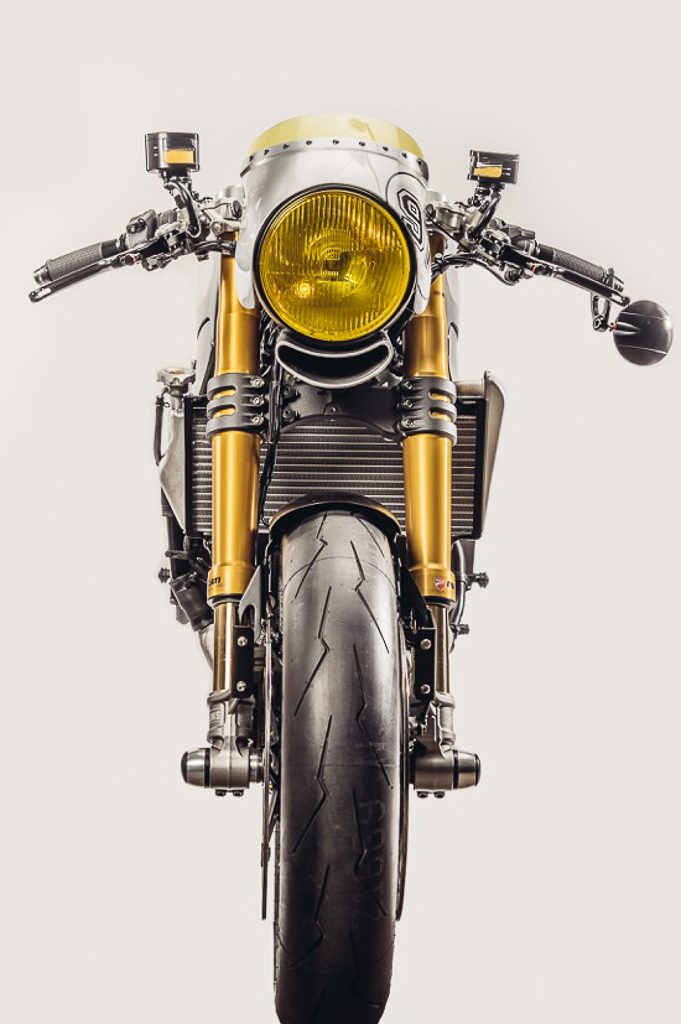 The folks over at Parts World assembled their dream team into making this cafe racer idea into a reality. The “Blue Shark” is a joint operation between Parts World, Ducati Zentralschweiz, Schaub Metalworks and last but not least, Akrapovič. 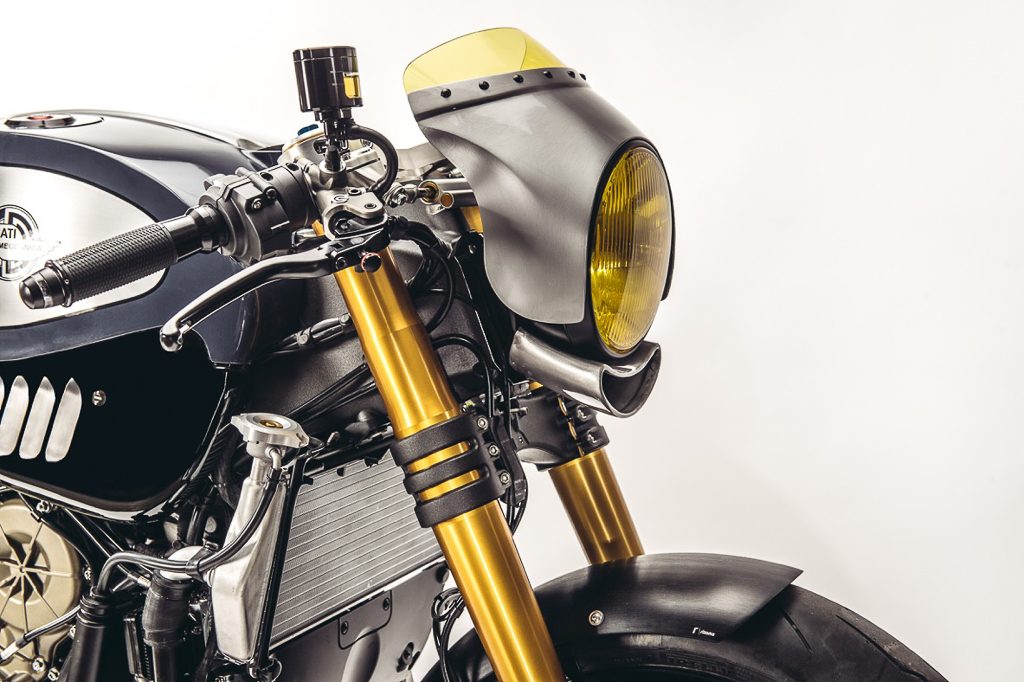 Brand new from the Ducati Zentralschweiz showroom, the Panigale R is a beast with the world’s most advanced motorcycle technology. The team’s major task was to make the cafe racer as sleek and simplistic as possible and that requires hiding miles and miles of wiring for the plethora of electronic riding aids on the Panigale R such as ABS, Ride-by-Wire, wheelie control and many other components. 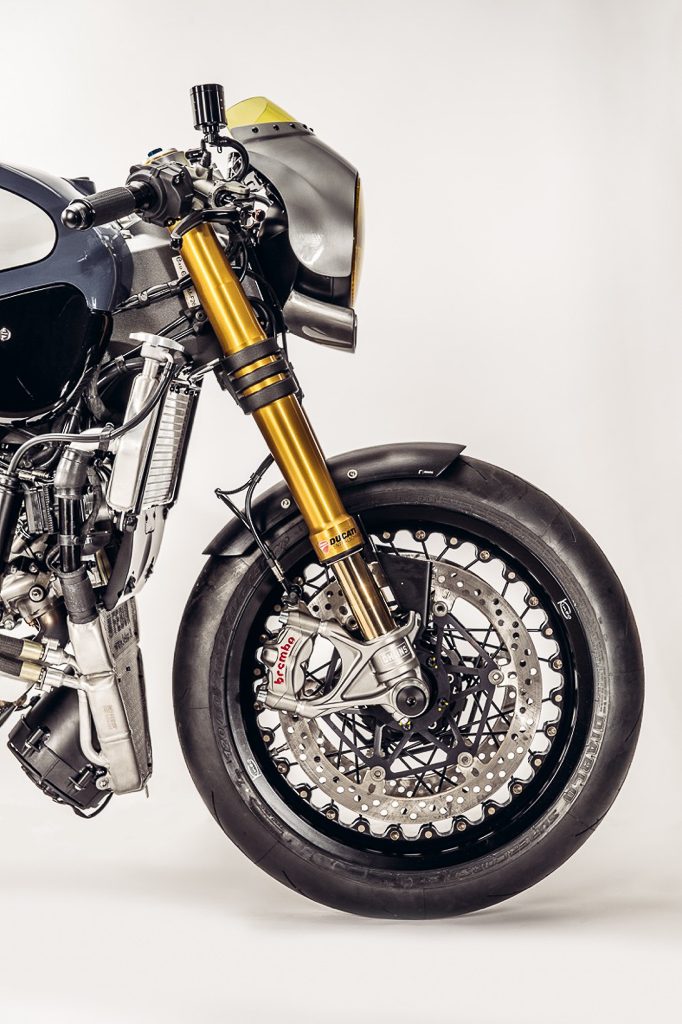 Being true to the cafe racer theme, Andy Matter stripped the Panigale R of all its plastic parts to be replaced with an all-metal body. That’s when Raphael Schaub from Schaub Metalworks comes into play. The master craftsman worked each and every metal part by hand. NO ELECTRONIC AIDS HERE. 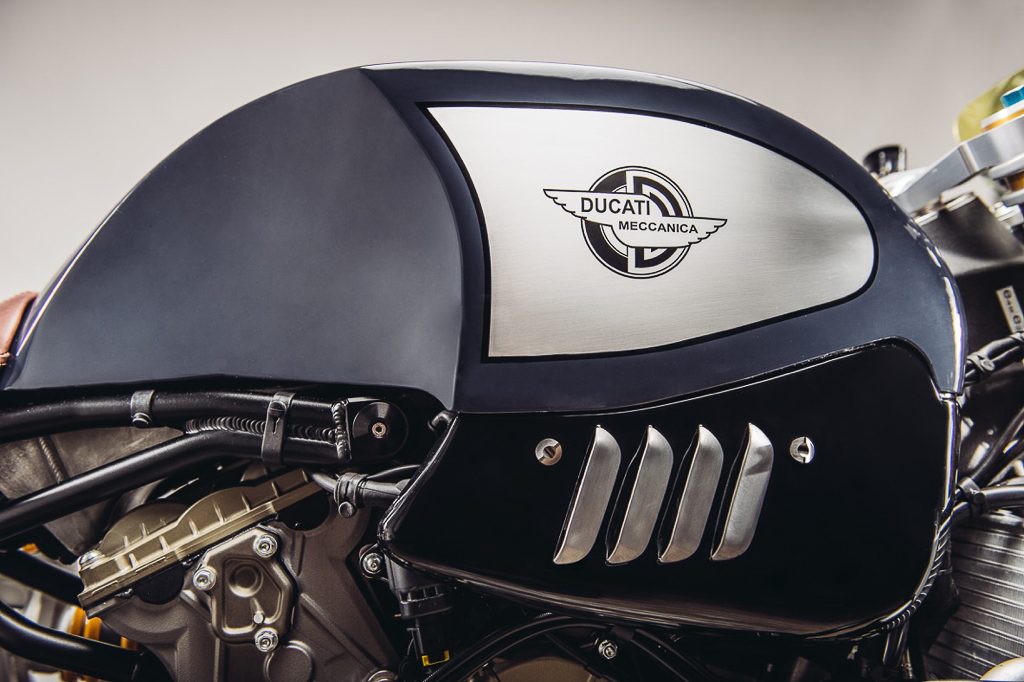 Schaub was able to turn pieces of 2mm aluminium sheets into unique parts that started with the fuel tank. Smooth lines and angles were incorporated together with the Panigale subframe which can be a daunting task for most craftsmen out there. A touch of class was given by the metal gills on the side of the tank. 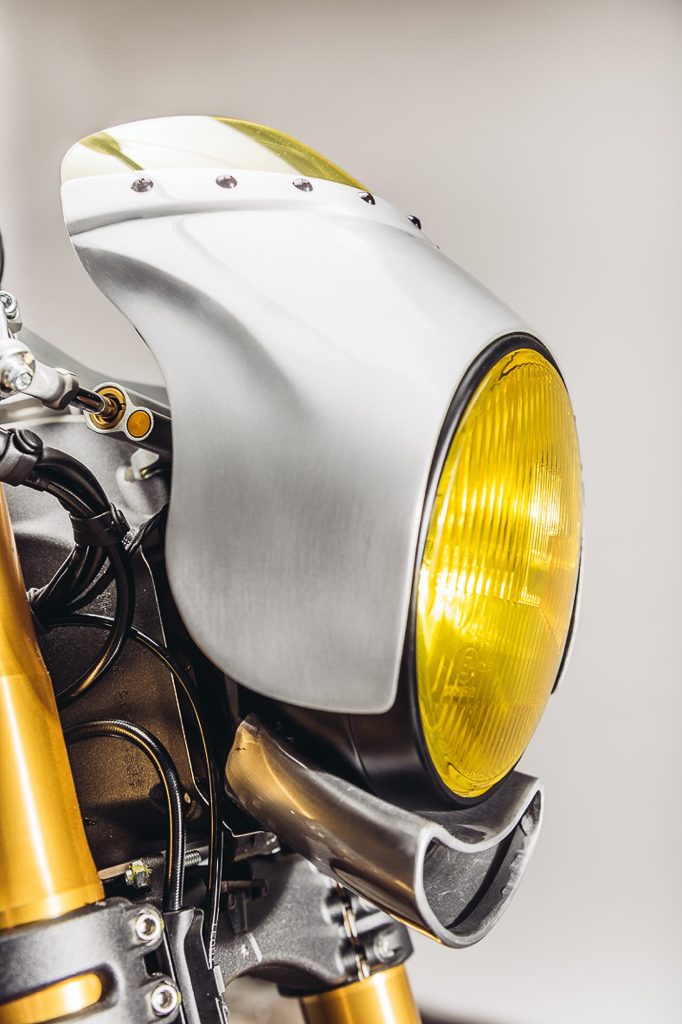 The next challenge was coming up with the perfect single seat design to match the Panigale’s tail lines and also to fit together with the new tank. The challenge was accepted by Schaub and he knocked it out of the ball park with the end result. He even remade the ram air intake using alloy to make the bodywork function as good as they look. 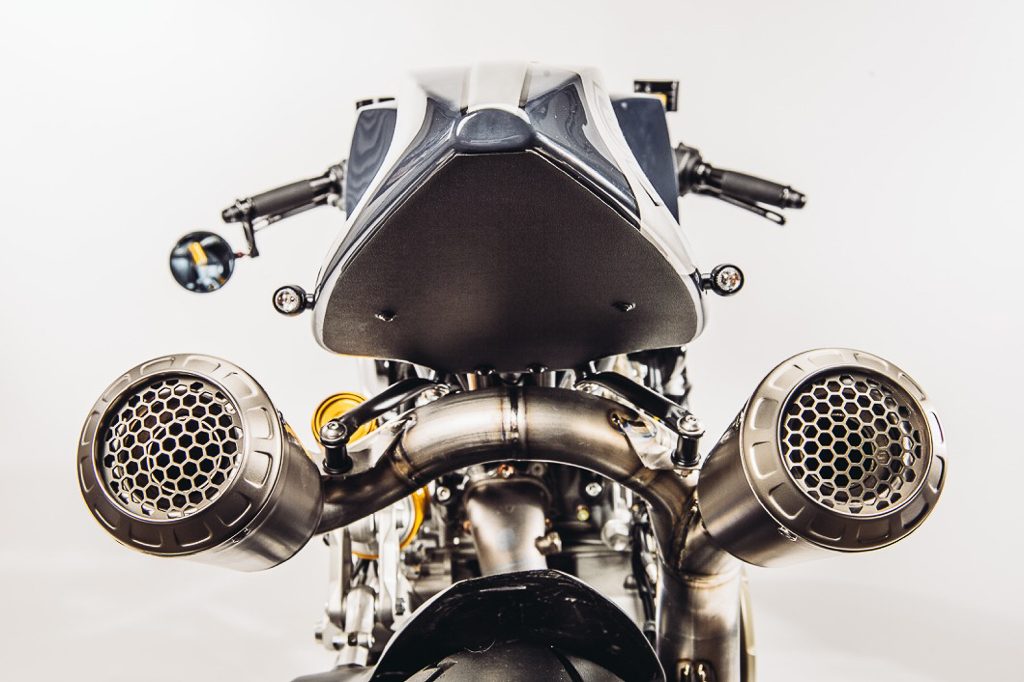 Once the entire bodywork has been completed, they handed the bike over to Burkhardts, a classic car and bike body shop, where they gave them the creative freedom on the perfect and unique colour for the steam punk-like Panigale. It looks like they made the right choice. 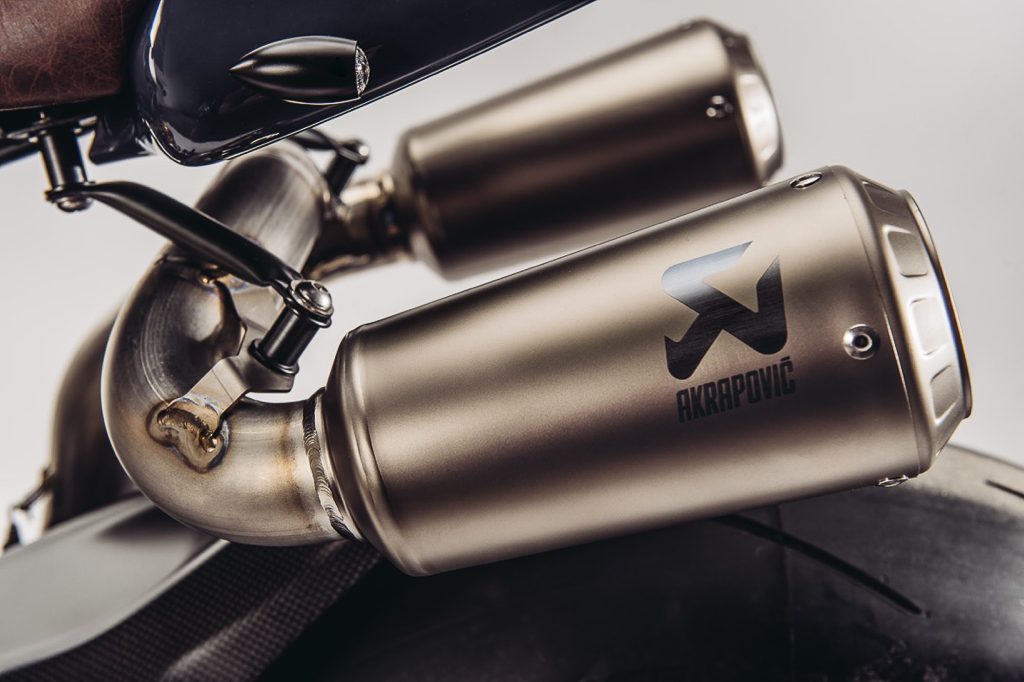 Besides all the work that has been put through, we can honestly say that the gravity-pulling factor of this bike has to be the full system exhaust from exhaust expert, Akrapovič. It was slightly easier for Parts World to get their hands on the full titanium system called ‘The Shotgun’ which was used by WorldSBK Ducati factory rider, Chaz Davies as they are the official Akrapovič distributor for Switzerland. 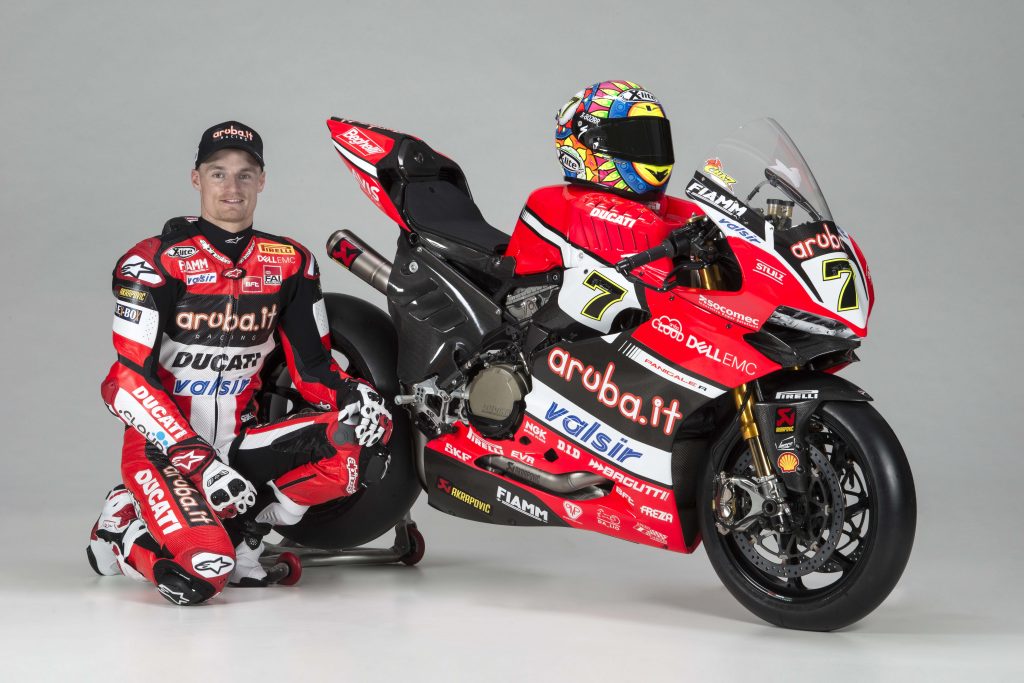 ‘The Shotgun’ was requested by Chaz Davies himself to give more power to the Panigale R in which has helped him to win a number of races for Ducati. With increased performance, the twin pipes also offer sublimed soundtrack and of course, shoot flames like nobody’s business. 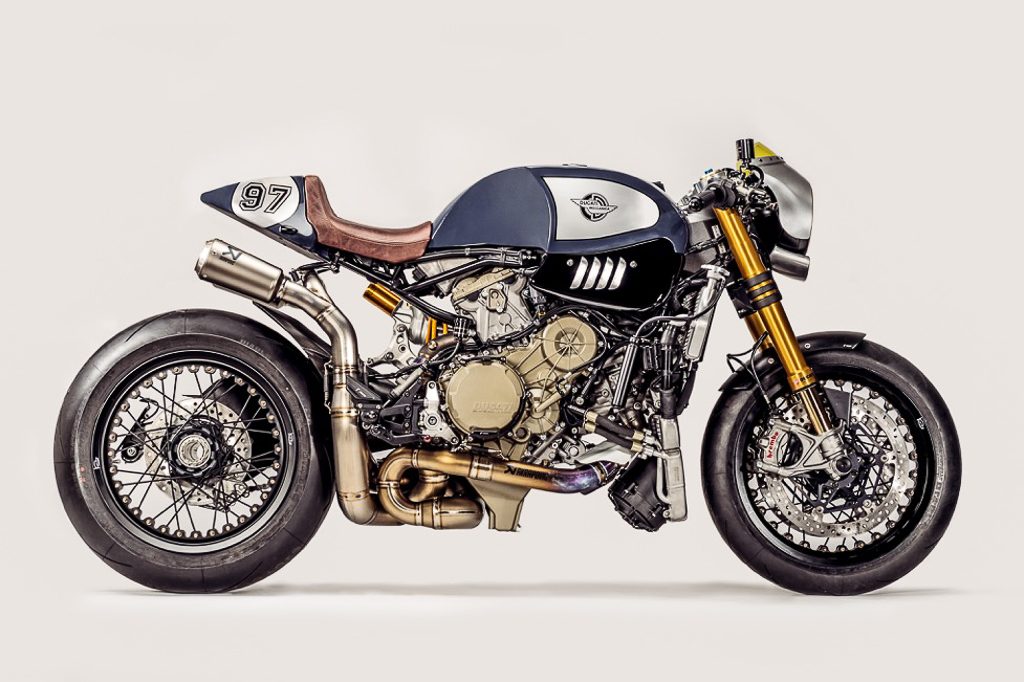 With so many help for experts in the field, they managed to pull off one of the greatest feats ever to be attempted on a Panigale R and it is beautiful. Interested to see it live? Head over to Biarritz for Wheels & Waves or to Glemseck in Germany later this year. Just don’t blame us if you can’t sleep due to constantly thinking about ‘The Blue Shark’.