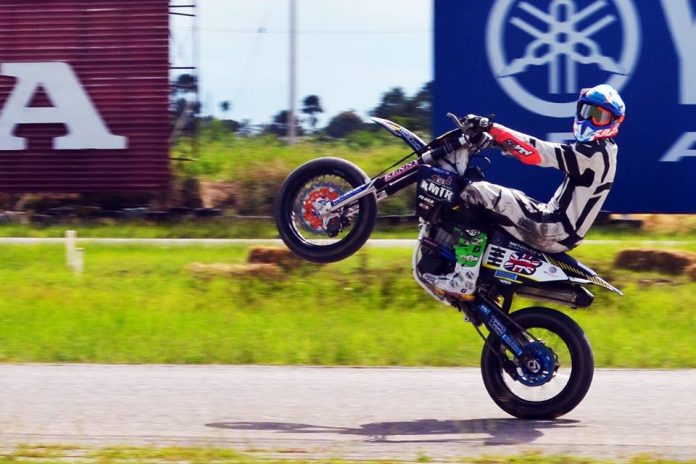 Moto 1 started with the sun shining directly above the riders.

Pole sitter Cornish grabbed the holeshot, but was followed tightly by all riders onto straight of the tarmac section, instead being diverted into the off-road section.

The tight hairpin turn immediately after the last table top remained as the biggest challenge, serving as an advantage to some riders and vice-versa for others.

With Cornish speeding ahead on an empty circuit, he opened up a two-second gap within a few laps to the pursuing Gabit and Thangthong. That left the latter two to battle between themselves, giving Cornish an even bigger cushion.

The top three remained the same, until five minutes before the end of Moto 1, when Gabit was overtaken by Thangthong. The Thai rider had planned his move at the right moment, giving Gabit no time to regain the second spot.

Dutchman Marcel Van Drunen, who had fought tooth and nail against Cornish in Qualifying and SuperChrono, was stuck in a fierce battle with another of Malaysia’s ace, Khairi Zakaria throughout the race to finish fourth, with the latter in fifth.

Cornish stole the holeshot again at the start and never looked back to win his second Moto of the day, finishing the race comfortably five seconds ahead of Thangthong.

“It was a very technical track. Most of us were using slick tyres to race on the track. With the triple dirt section, it feels more like a motocross track instead. I made multiple mistakes in Moto 1 but reduced it in Moto 2. I believe Trakarn and Gabit made mistakes as well, which gave me an advantage to the race,” said Lewis.

“I was fortunate when Gabit hit on a hole at the third dirt section. That was when I passed him. He grew so much since we last faced off in 2015. I enjoyed riding with all the riders, and hopefully, I can perform better in Indonesia,” said Thangthong.

Seemingly making amends to his fourth place finish in Moto 1, Van Drunen fought with Gabit for the final podium spot. The two exchanged places multiple times with high-risk maneuvers in the tighter corners.

The contest ended just two laps from the end of the race, when Gabit ran off the track. It was a brave performance from the Malaysian, however, when the KTM Malaysia factory rider revealed later that he had lost his brakes.

“My front and rear brakes malfunctioned, and I lost control of my bike. This makes it even harder for me to maintain my pace, especially on this track. I tried my best to ensure the best possible result in this condition,” said Gabit.

Malaysia’s Khairi Zakaria attempted to close the gap to the Dutchman, but his efforts were forlorn when he made a mistake at the transition between the road and off-road section. Khairi landed fourth in Moto 2, finishing nearly two seconds behind Marcel with a total time of 23:50.924.

“It was a perfect and successful race. We would like to congratulate the Asia Supersports Group, FMSCT, all the partners and all the riders. The opening round of the season was exciting, and everything was in order. The track is probably one of the most challenging tracks in the season’s history, but all safety aspects were taken into consideration,” said Stephan P. Carapiet, FIM Asia Safety Officer. 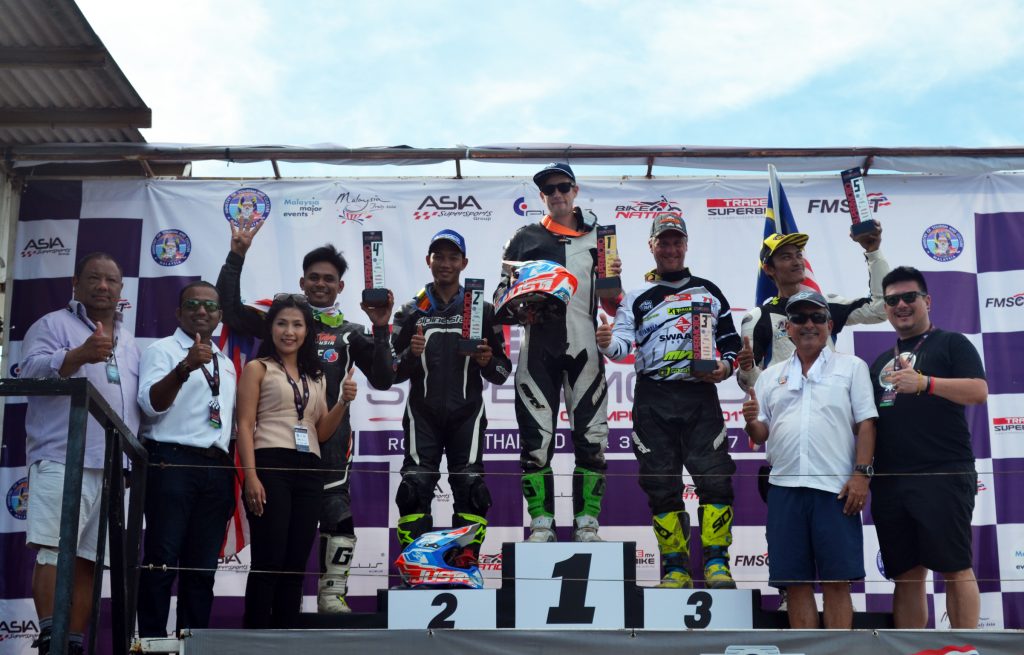 The 2017 FIM Asia SuperMoto Championship will commence in Jogjakarta, Indonesia on 7 and 8 October 2017.

For more information, visit www.supermotoasia.com or watch the race live for free in HD on www.twenty3.tv powered by E-Plus Global Sdn Bhd.