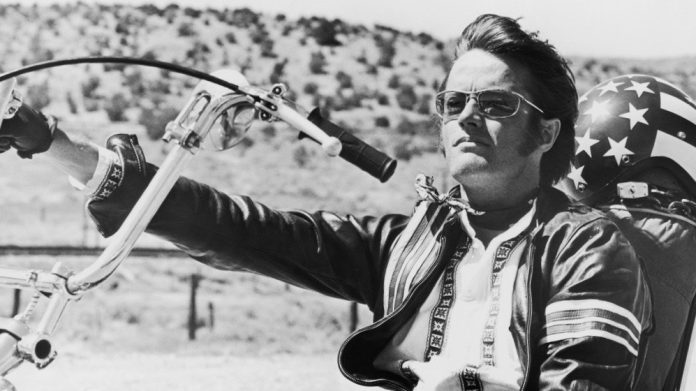 Peter Fonda, the star of the iconic 1969 film “Easy Rider” has passed away at age 79, due to lung cancer. The sad news was confirmed by his wife Margaret (Parky) DeVogelaere and actress sister Jane Fonda.

Fonda became known as the motorcycle actor of Hollywood through his many characters as bikers and bike flicks.

He first shot to fame in the controversial film “The Wild Angels” in 1966. The film portrayed a group of bikers as a modern-day barbaric horde whose only objective total anarchy i.e. sex (as in sexual assault), drugs and motorcycles. Director Roger Corman revealed later that the US State Department has tried to block its screening in Venice because “it didn’t portray the real America.”

Fonda decided that bikers should be portrayed in a better light, hence he began writing on “Easy Rider.” Teaming up with the late Dennis Hopper, he became the producer and handed the director’s chair to the latter.

The film received a nomination for the Best Picture of the Year, while Jack Nicholson won the Oscar for the Best Supporting Actor. Easy Rider has since been inducted into the US National Film Registry, having been deemed “culturally, historically or aesthetically significant.” Easy Rider just celebrated the 50th anniversary of its first screening.

Fonda continued being cast in biker roles through the years.

He then received a nomination for Best Actor in the 1997 film “Ulee’s Gold” but lost out to Jack Nicholson for his role in “As Good as It Gets.”

We saw him again in later years, case opposite Nicholas Cage in “Ghost Rider.” He also made an appearance in “Wild Hogs.”

While Fonda was invariably associated with Harley-Davidson (especially the bike called Captain America), he had owned a number of brands including Triumph, BMW, Ducati, MV Agusta.

He had also worked with Evel Kenevel to promote riding with gear on. That’s a normal thing these days, but it was different in the 70’s.